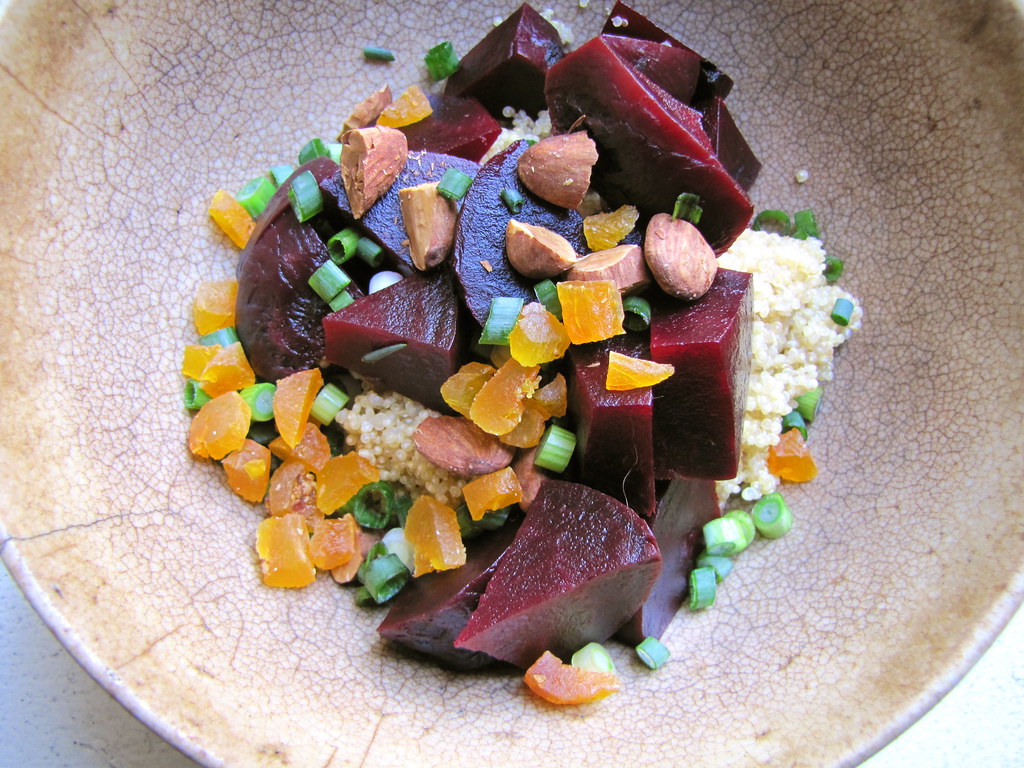 If this isn’t a refreshing way to enter winter eating, I don’t know what is. I’m talking about the leanest, meanest days for finding fresh produce, the doldrums of harvesting. Yeah, we’ll be here for a while longer. Luckily, there are always some dried fruits, nuts and grains that have been stored away for safekeeping — and only the toughest of the fresh root vegetables survive, like beets.

An old roommate of mine had some weird eating habits: often, she’d make pasta and toss it with a can of beets. The strangest sight when she left her dishes in the sink. She would have cravings for beets, something which I couldn’t relate to at the time, but now can (although preferably not those from a can). I couldn’t get over the way certain places of penne would absorb a stamp of beet stain, but can enjoy the reddish tint to a mound of white quinoa. It looks like red quinoa, anyway! 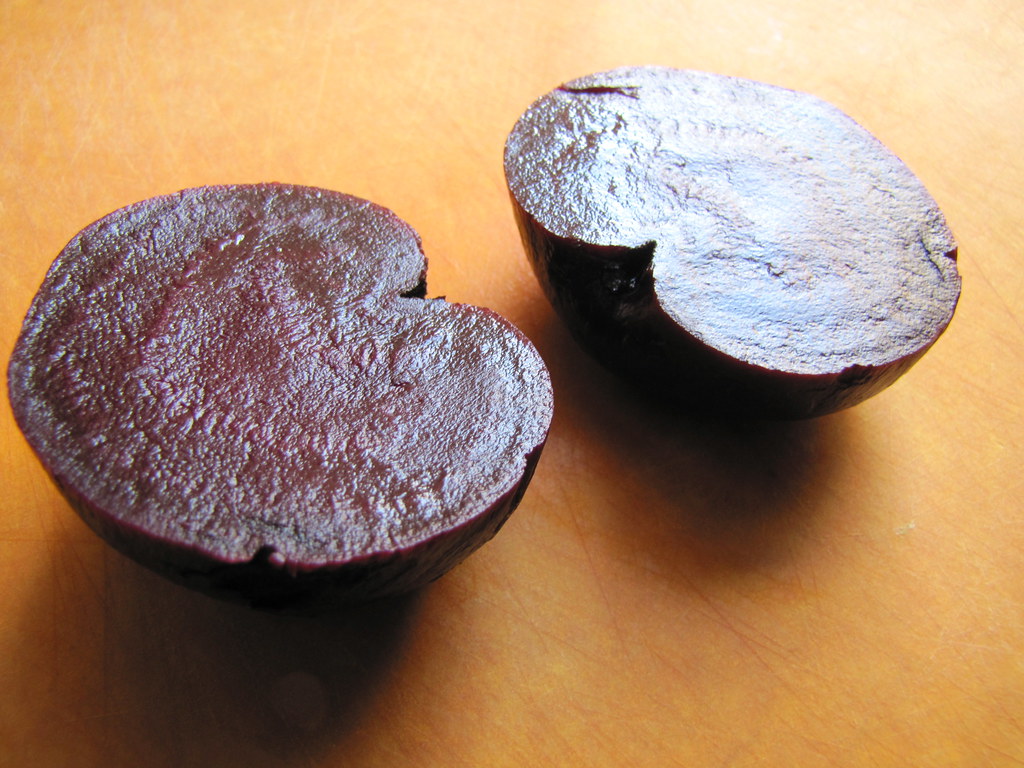 This is a hearty, healthy, and surprisingly savory dish to absorb, too. You’ll get a full dose of antioxidants from the beets, and enjoy their contrast of textures from chewy, dried apricots and crunchy toasted almonds. The quinoa are the blank slate here that provides filling power as well as incredible amounts of fiber and protein, for their size.

You’ve got to have a loose hand with the lemon and olive oil to make this dish really sing, though. I’ve added scallions (or you could instead add chopped red onion) for some bite, and to introduce new color into the spectrum. When it’s a salad after all, I feel there should be some green. Don’t feel bad for buying the best olive oil you can find for this. I like to keep two separate kinds: one for cooking, and one for making fresh salads taste amazing. Don’t use the amazing olive oil if you’re going to heat it up, or it’s a waste (but do drizzle it on top of finished, hot dishes for pizazz). 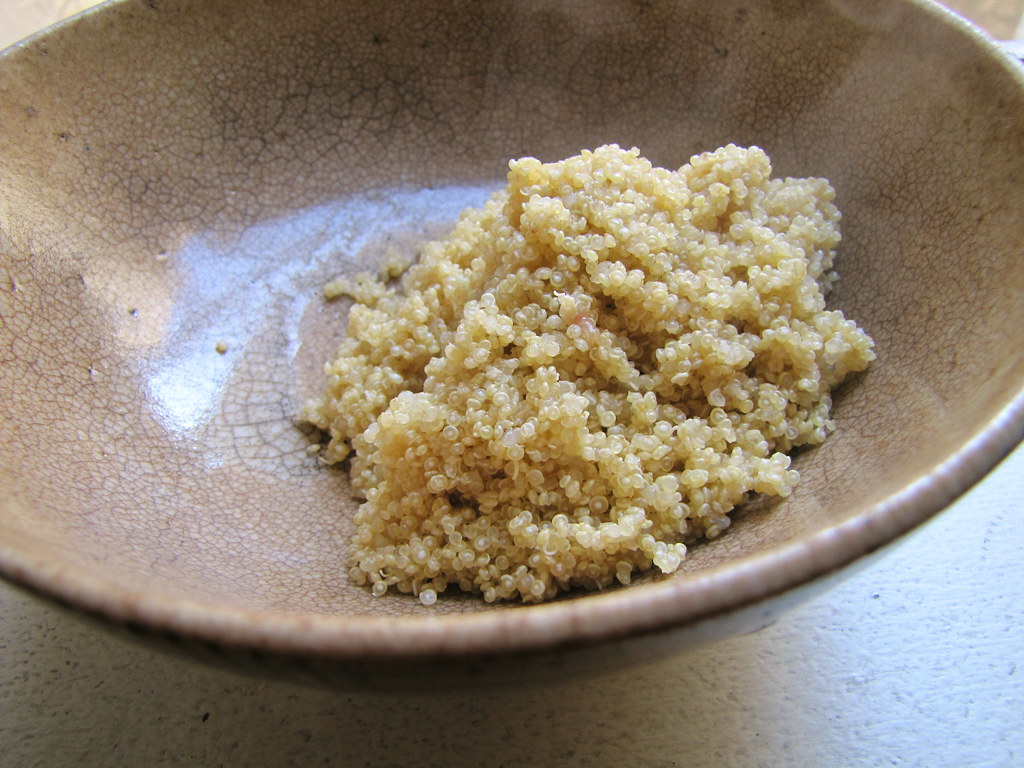 You can also make this dish with any kind of whole grain. Cooked (but separate and fluffy) barley grains would complement the earthy taste of beets here, too, as well as spelt or wheatberries, or oat groats (which take so long to boil, I’ve pushed them to the back of my pantry).

I would be lying if I told you I didn’t pull these dried apricot and almond pieces out of a bag of granola I had from the Bklyn Larder. There were so many in there! Granola is actually a good comparison for a dish like this. Instead of adding fresh fruit like strawberries to a bowl full of it, we’ve got some red beet wedges, which have enough sweetness to compete with the honey or brown sugar that would be otherwise caked to the oats. 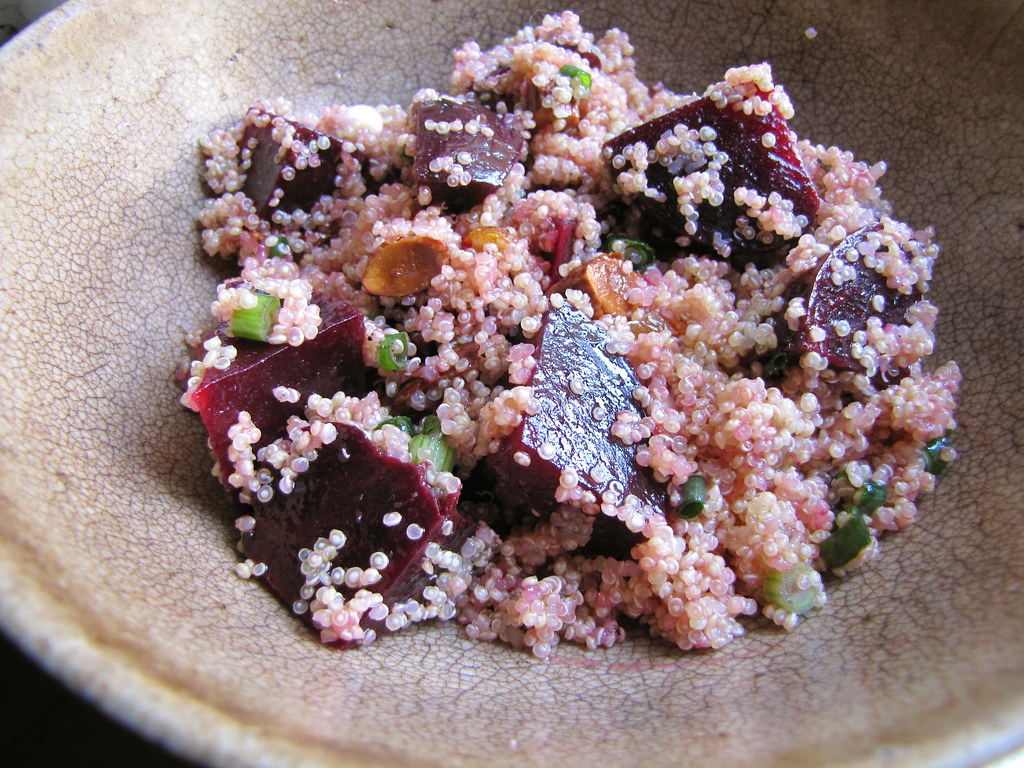 the finished dish, mixed up

Maybe drink a glass of milk along with it to get the full effect.

Cover the quinoa by half an inch of water. Bring to a boil, then reduce to a simmer. Cook, stirring occasionally, until the water is all absorbed and quinoa seeds have popped open. Let air-dry 10 minutes.

Peel the roasted beets (once cool enough to handle; can be refrigerated for 2-3 days before). Chop into large wedges or pieces. Toss all ingredients together and season to taste. Serve immediately at room-temperature, or cover and refrigerate up to a day.

Three brownie points: Red beets are deeply antioxidant, containing many phytochemicals that have been associated with cancer protection, lower cholesterol, tissue growth (from its plentiful folate), and anti-aging effects. Quinoa is an incredibly healthy whole grain: one cup has eight grams of protein, and five grams of fiber. This “mother grain” as the Incas called it has also been associated with cardiovascular health and migraine prevention. There’s not much going against this recipe health-wise, except for the natural sugars in beets.

Six maple leaves: This salad is filled with low carbon-footprint vegetables and grains, but is given its distinction with the help of imported olive oil, and lemons from across the country. A compromise for when the going gets rough in winter.