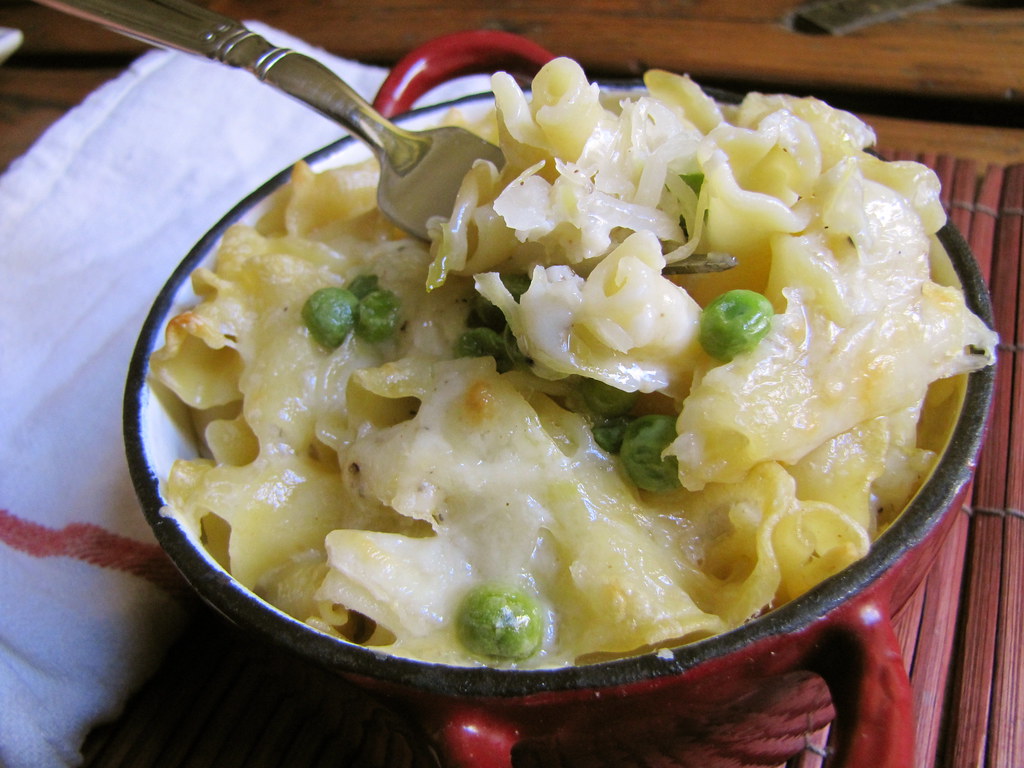 I may never master the all-American macaroni and cheese myself. But after sampling some thirty best efforts of this dish at Brooklyn’s second Mac & Cheeze Takedown on Sunday, I may have some more clues. Mac and cheese is one of those quintessential home-cooked dishes (along with chili, the food that began the Takedown), meant to be shared by many and enjoyed by all. But as I wasn’t competing in this Takedown myself (I’d asked host Matt Timms to but he promoted me to judging it since there was no more room for contestants), I thought I’d fashion up my own, individual attempt at the dish the day before.


If the thought of sauerkraut with cheese makes you cringe, just think of it as a pickle — finely shredded, lacto-fermented cabbage pickles, that is. What could go better with cheesy, buttery carbs than that? I knew just enough about science to predict that a classic bechamel sauce base (to melt the cheese in before baking) wouldn’t like the additional juices from the sauerkraut, so I skipped that part, and just folded in the grated cheese. And some frozen peas, because there’d be no other color than white (butter, white cheddar, pasta, sauerkraut) otherwise. 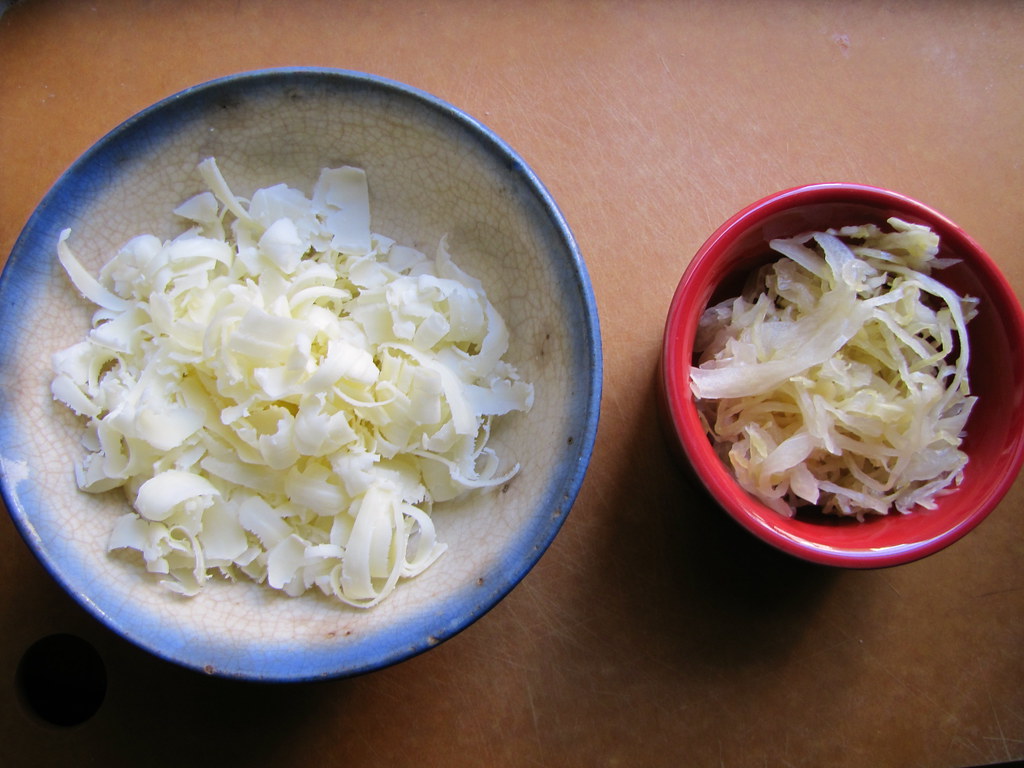 It was a good, quick, single person-household meal. Especially if you like sauerkraut. If not making your own, be sure to check whether the sauerkraut you’re getting has active probiotic cultures, as many packaged types are pasteurized and no longer have this benefit (nor the same crispness, usually).

I’ve added the recipe for it at the bottom of this post, but let’s check out some of the entries from the Takedown, since they were sweating it out by the oven much longer than I was. 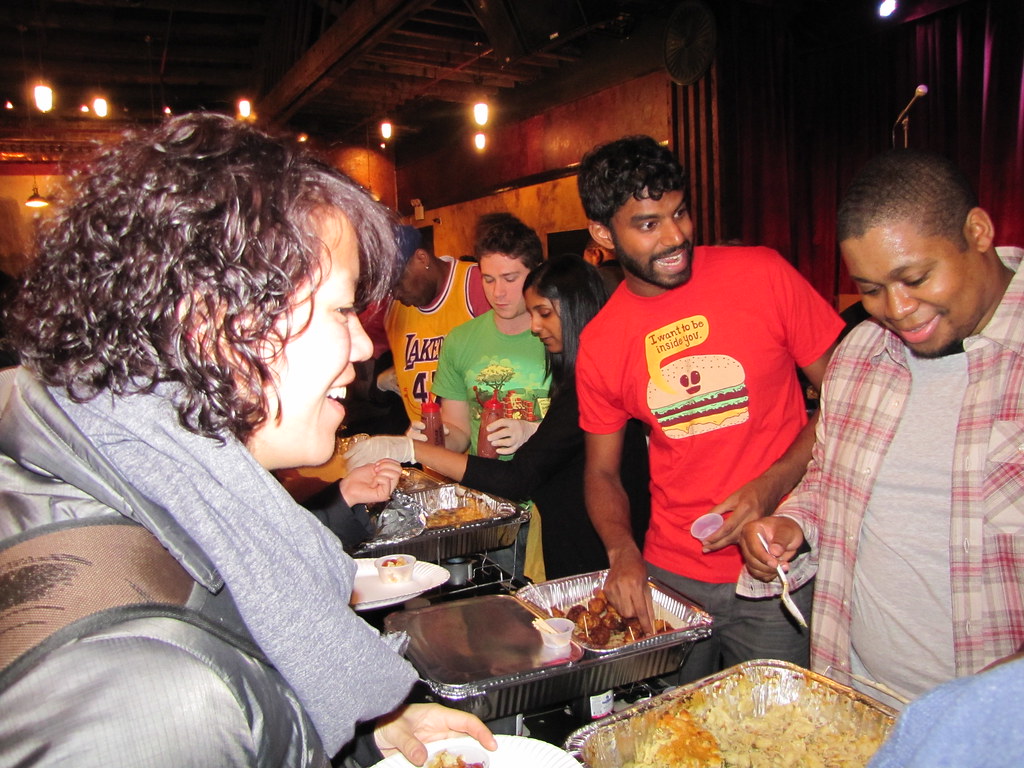 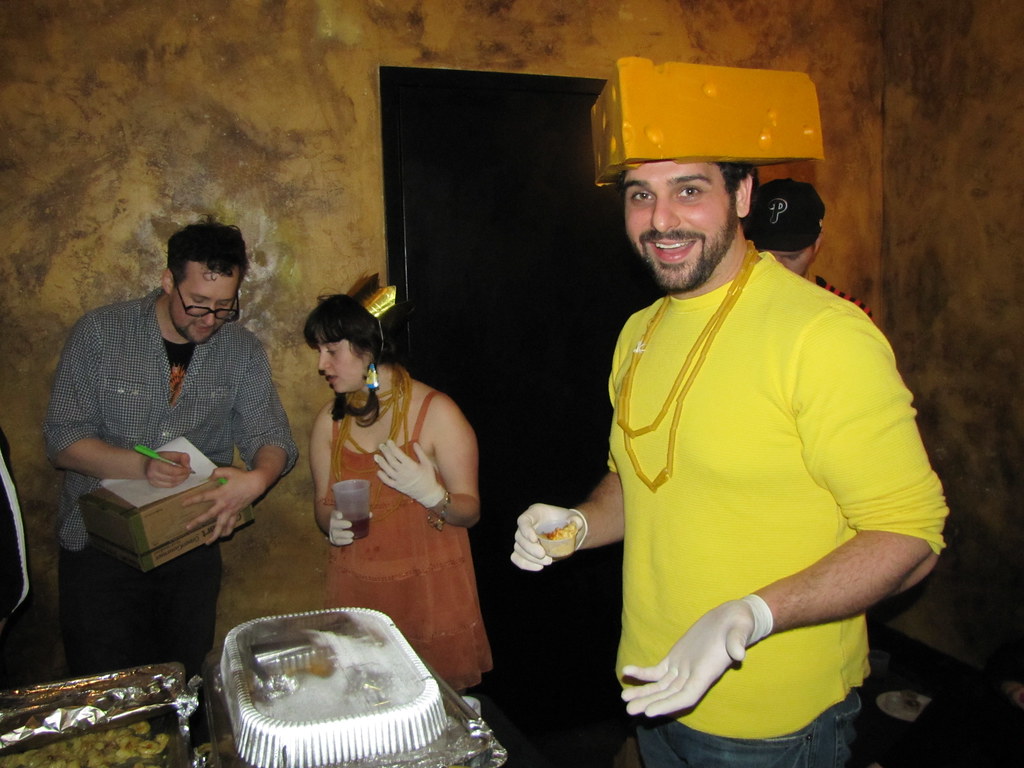 the best-dressed team of the night 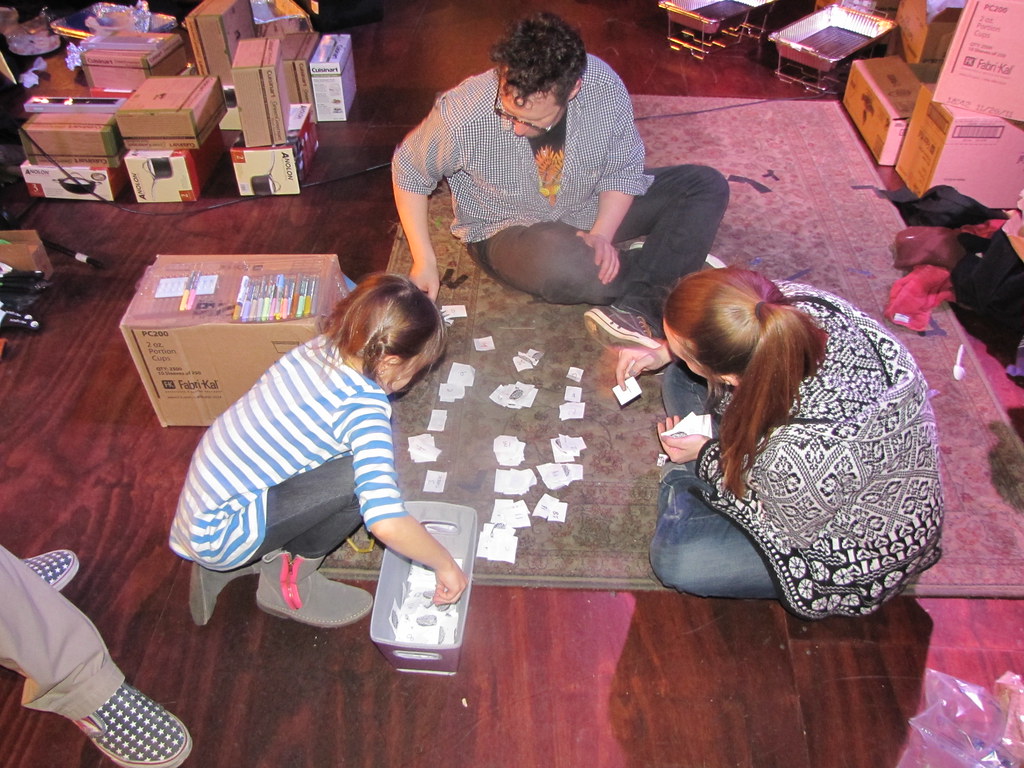 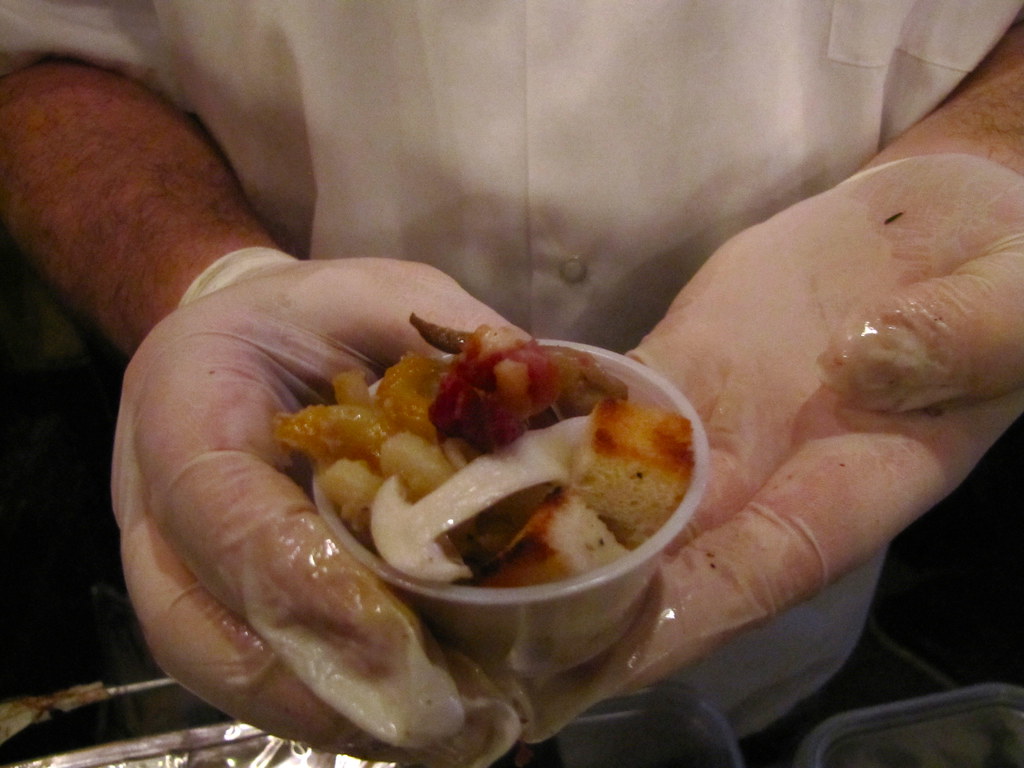 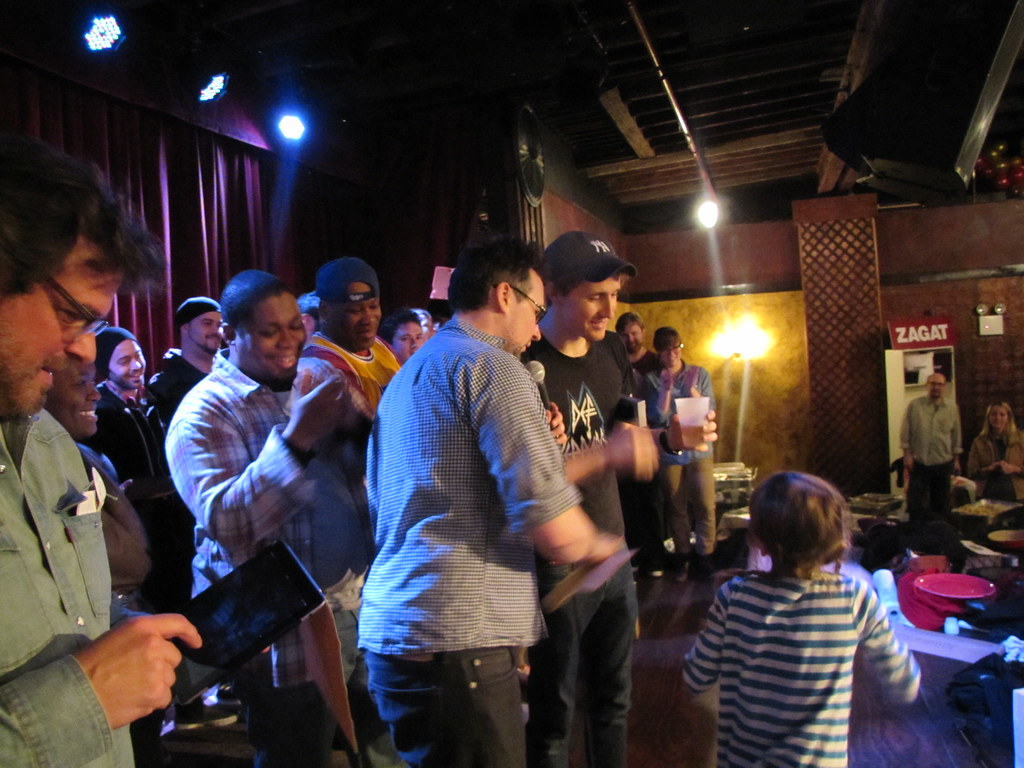 As you can tell from these photos, we all had the most amazing time of 2012 thus far. Check out Gabi Porter’s awesome pics from the event, too, at Zagat. Or my Flickr set for what shots I was able to grab. In the end, the cheesiest people on earth all gathered on stage to announce the big wins. Judging was two-tiered: Audience Choice, and Judges’ Choice. I had the fond time of discoursing my favorites as a judge along with George Motz, of hamburger fame, and James Mulcahy from Zagat, one of the event’s sponsors. Some macs and cheeses that didn’t receive official award mention but were very much liked by me included one by Greg Erskine, with barbecued beef and bleu cheese, and a team wearing Misfits t-shirts, who studded their mac with pancetta and leeks. Alas, it came down to a small few that did get to take home hefty prizes, although everyone got a complimentary cheese grater.

So little time, so much to eat! I can’t thank all the home cooks involved for schooling me in mac and cheese over the course of two hours enough. In fact, one contestant also put sauerkraut in her mac and cheese, along with beer-braised corned beef and Swiss cheese, her adaptation of the classic Jewish-New York reuben. Next time, I’ll try to finagle a recipe from the contest — meantime, here’s my take!

Preheat oven to 375 degrees. Cook and drain pasta; return to pot and stir in butter to melt. Stir in 3/4 of the grated cheese, the sauerkraut and peas. Transfer to a small gratin dish or individual oven-proof pot of some type. Bake for about 20 minutes or until just lightly browned on top (you can also transfer to the broiler for the last couple minutes to achieve this). Serve.