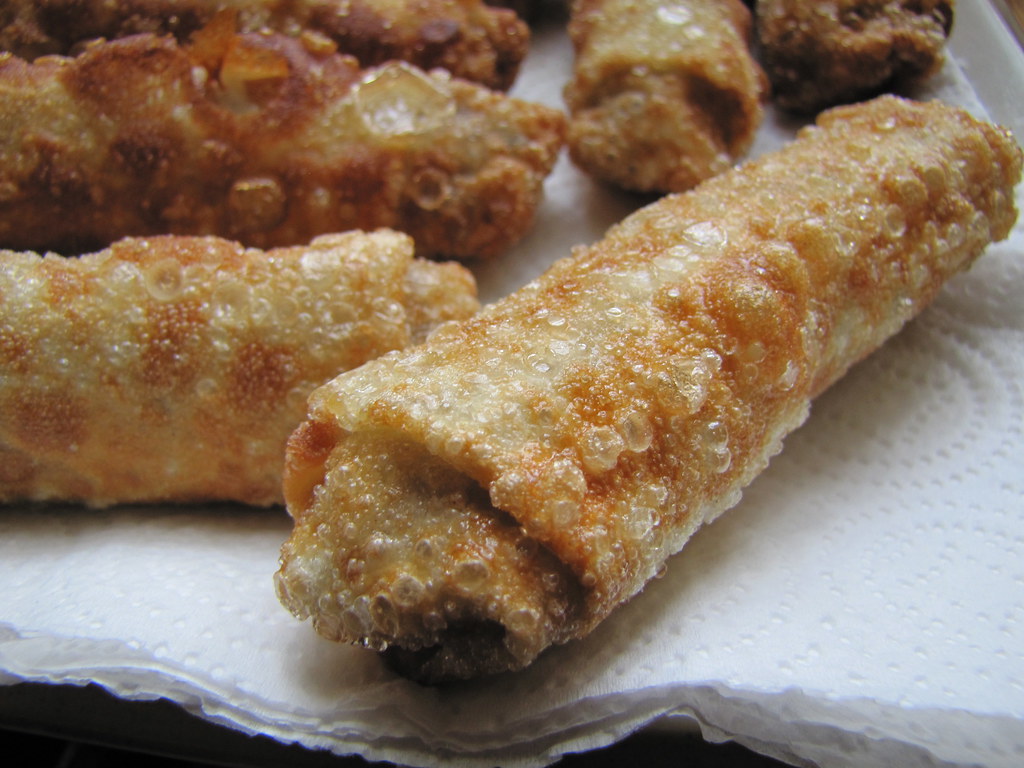 This past Sunday marked a collision of occasions, not the least of which being the eve of Chinese New Year. But it was also the day of a major football game, a pre-Superbowl Sunday, you might say. Most important, and the one I chose to celebrate: it was Karol’s finger-food potluck birthday party. I think this dish could have satisfied the crowds at gatherings for all three.


I used ground beef for these spring rolls, just because I had some in the freezer. Usually, ground pork mixed with bits of chopped, raw shrimp would be the archetypal filling, along with a plethora of vegetables. You could also make a purely vegetable-filled roll, and no one would mind. It’s a crispy, hand-held roll of fried crispness — what could matter what’s inside?

I was hoping no one would discover my fluke of substituting beef, but they did. In a good way. It’s a quite refreshing change of pace, and fresh these morsels did taste, more importantly. 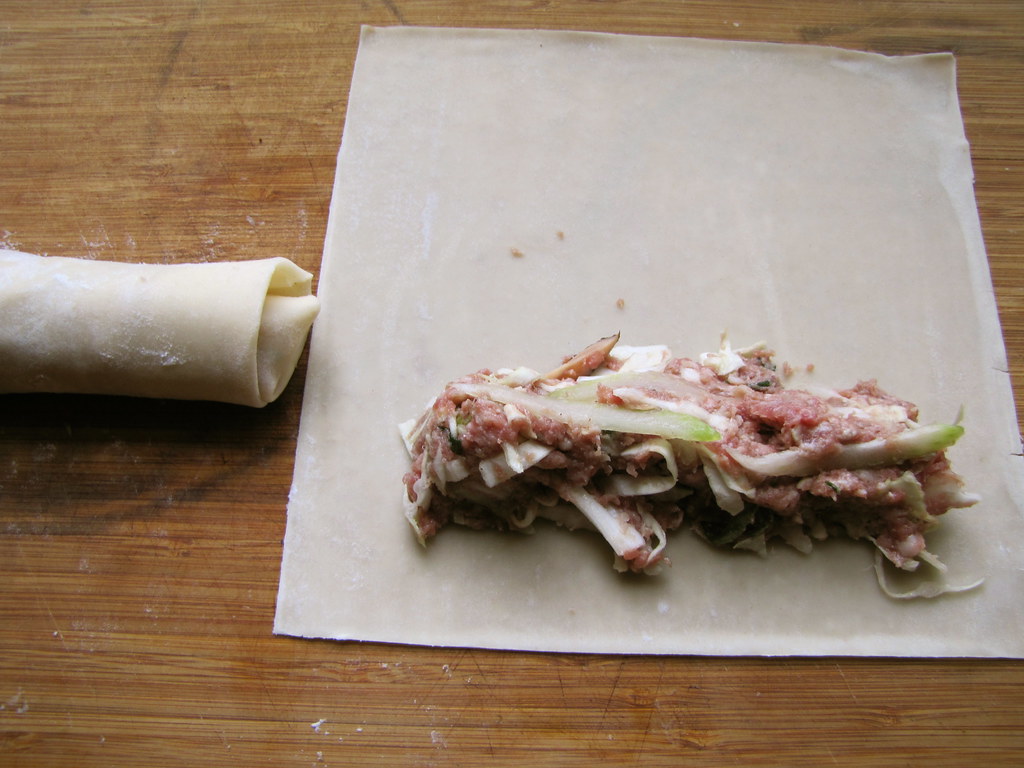 Aside from the requisite cabbage, scallions and shiitake mushrooms, I added slivers of celery in lieu of carrot, which could be easily be shredded to use here, too. This isn’t your typical cheap Chinese take-out egg roll, I should clarify. Before those oversized repositories for scraps of cabbage were invented, there were many types of crispy sheets of noodle stuffed with meat and vegetables. They are commonly found in Cantonese restaurants, especially dim sum. As it turned out, at the party, someone else made spring rolls, too — a more typical, pork and vegetable version by none other than the birthday girl, Karol. (We didn’t plan that, swear.)

After thawing that beef, I went to work on shredding vegetables to fold it with. Plenty of ginger was grated and plopped in the mixture, along with soy sauce, oyster sauce, salt and white pepper. 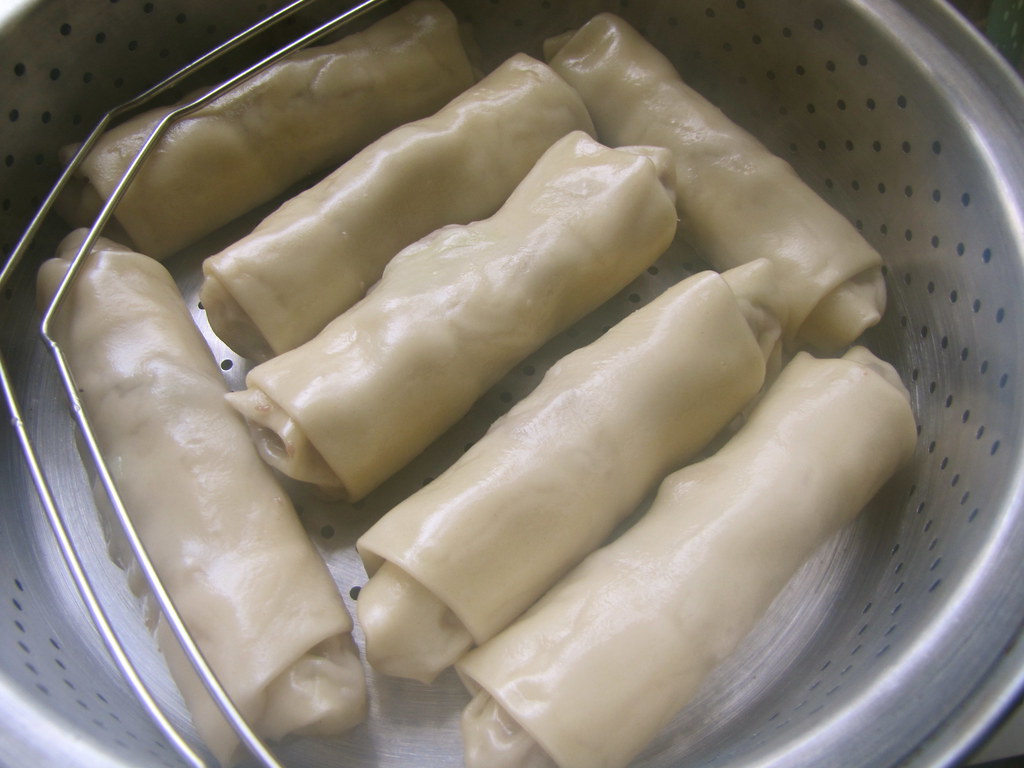 just after steaming, the skins are glued shut

Because these rolls are only fried in oil until the skins get crispy, the meat needs to cook somehow first. I found the task of rolling up cooked meat inside one of these wrappers daunting; also, I’m so accustomed to making dumplings with raw meat, and steaming them til their insides cook through. That way, the juices stay contained inside the wrapper, rather than spilling all over a pan. So I followed suit and rolled the spring rolls — raw — and placed them in a steamer before before deep-frying. This also accomplished another task I thought would be difficult: making sure the skins held together during the deep-fry. After five minutes of steaming, the wrappers turned translucent, the meat inside firm and cooked through, and the spring rolls were glued shut, impossible to un-roll. 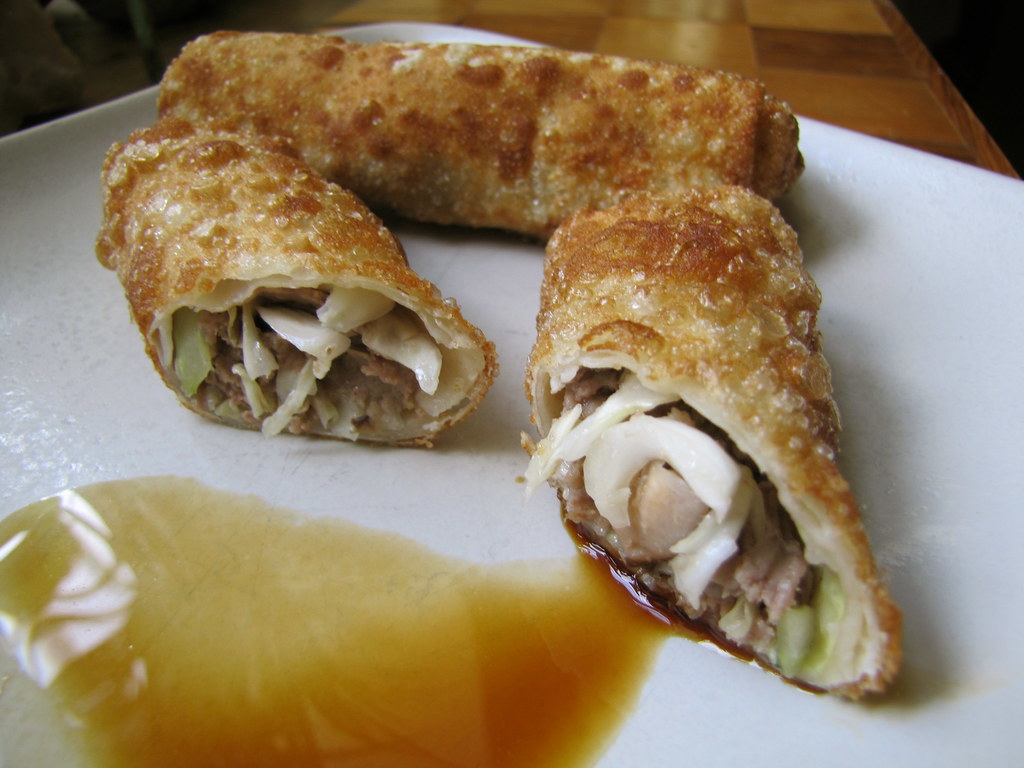 the finished dish, with soy sauce for dipping

The final step was simply a matter of letting their surfaces crisp in hot oil. It takes all of two minutes per roll to achieve, and you can flip them once during if your oil doesn’t quite reach the top of the rolls (as I did). The pre-made spring roll skins I’d bought seemed to have an especially puffy effect when fried, gasping open in large bubbles throughout. (I’d entertained the idea of making my own skin with a pasta crank, but ultimately didn’t have enough time.) They stayed surprisingly crisp and crunchy during transit, though, so I can’t complain. So whichever style of spring roll wrapper you use, don’t be afraid to innovate.

Combine all the ingredients except the wrappers and oil. Cover and let marinate for at least 30 minutes or up to 1 day.

Place a spring roll wrapper on a flat surface. Spread about 2 tablespoons of the filling about a half-inch away from the bottom edge and the sides. Tuck in the sides and roll up. Lay the sealed part on the bottom while you continue to roll up the rest of the filling in wrappers.

Heat a double-boiler or pot with a steaming rack to a roiling boil. Place the spring rolls at least 1/2 inch apart in the steaming tray with the sealed edges on the bottom. Cover and let steam for about 5 minutes. (You may want to work in batches.) Transfer to a tray and let cool / dry off for at least 5 minutes.

Heat the oil in a small pot so that the oil is deep enough to cover at least half the height of the rolls. Once oil is very hot, place in the rolls separated by an inch. Flip once bottoms are brown and let the opposite sides brown. Transfer to paper towels. Serve with soy sauce for dipping.

Seven brownie points: This is party food, for sure. It’s not something you’d want to eat every day — nor would likely have the time to make as often. The fried oil smell lingers in your kitchen long after these crispy, fattening bites will be consumed. Fortunately, you can be sure that it’s vegetable oil when you make it at home, unlike restaurants that might use lard to fry with. The juicy, meaty, cholesterol-rich meat filling is countered with some fresh and healthy vegetables, though, like the cabbage and carrot, and so it’s not a total loss for health points, especially when they’re kept crisp and fresh with this method.

Six maple leaves: The filling is largely ingredients that are easy to find any time of the year, from local farms: beef, cabbage, carrot. The oyster sauce, as well as the spring roll wrappers, were fairly processed, with some ingredients on the label that didn’t sound too natural. You can always skip the oyster sauce if you just can’t find it or don’t feel like going for it, and replace it with a pinch or two of sugar for the sweetness that it provides.