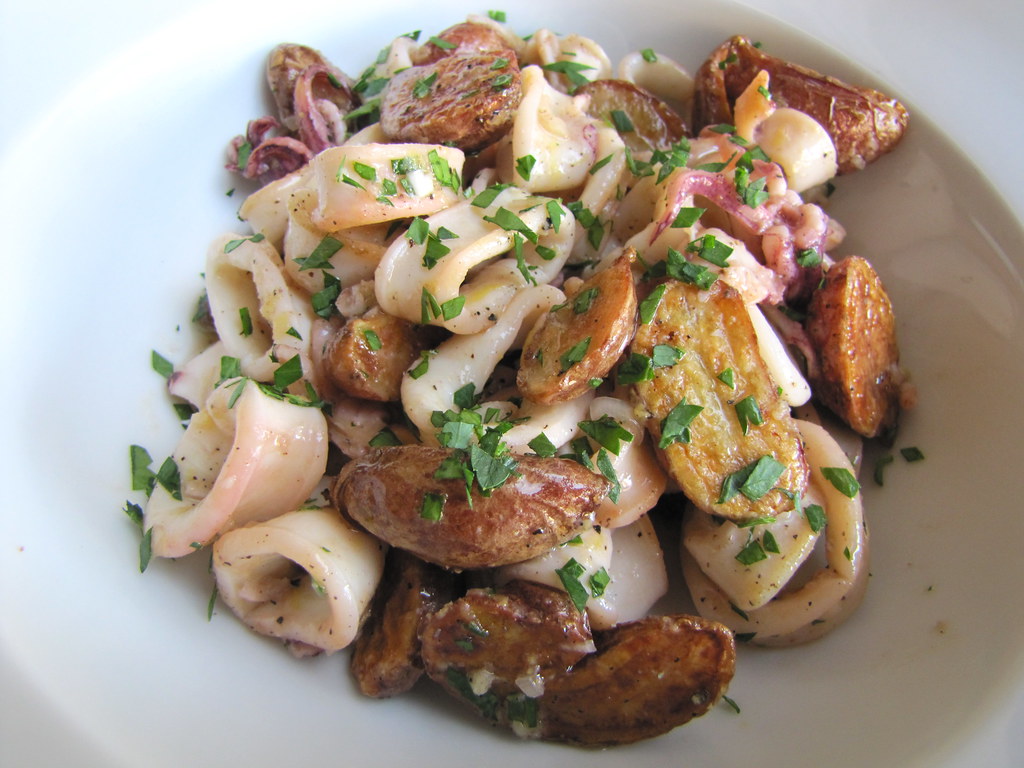 Even when you’re put up to a task, the most personal, creative and rewarding results can follow. Bear that in mind the next time your roommate asks you to pick up the living room (maybe it could use those cute new throw pillows you’ve been eyeing). When Amanda at the popular Park Slope site with an expletive in the name asked me to take on a cooking challenge, I thought, that’s the last thing I need now — a chore. But, it sounded too cool to pass up: she wanted me to recreate a menu item from one of the many eateries in the neighborhood that was a favorite among readers in a poll. I’m actually surprised I haven’t done something quite like this yet.

And very flattered by F&%$ed in Park Slope to be asked. Though the readers chimed in with many restaurant-dish requests, the one that Amanda herself suggested as an option was the one that I ultimately made. It was the “octopus salad at Stone Park Cafe,” and it just sounded like the most fun to me. I looked it up on the restaurant’s online menu, and found its description:

Fourteen dollars per serving, eh? We’ll see about that, I thought. (After cost-calculating hundreds of recipes on this blog, it’s a rare thing indeed to surpass the ten-dollar threshold for a single serving.) Then I took off to the Greenmarket, to see what they had. 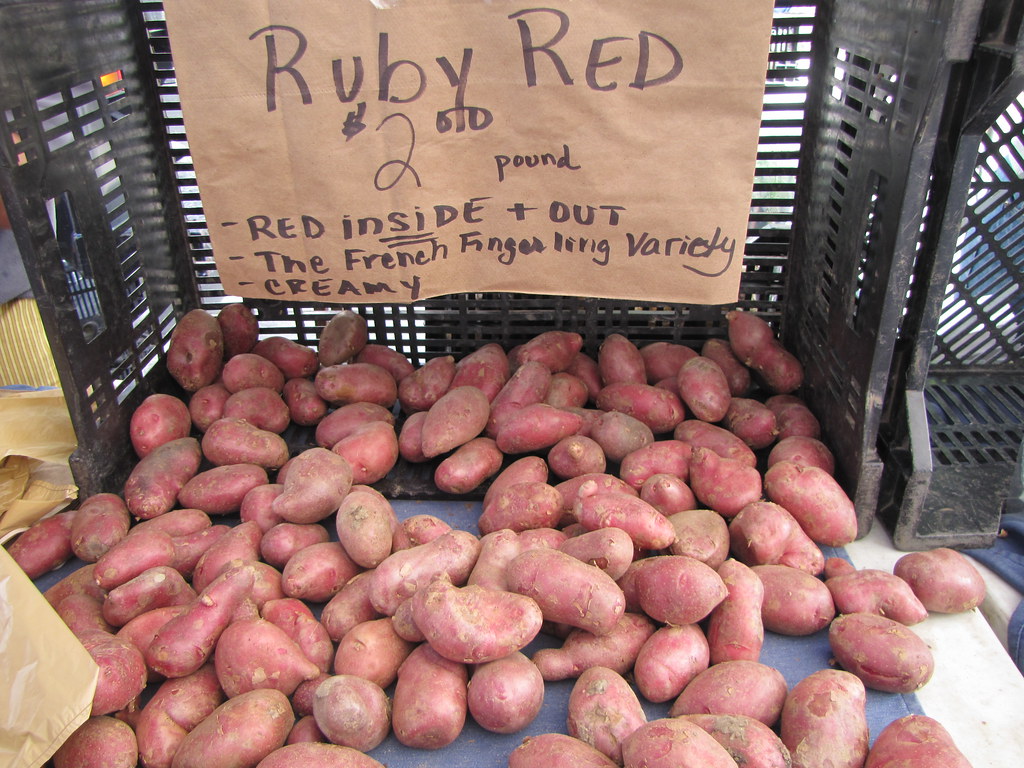 I knew from the start that I wasn’t going to strive for exact replication, but try to translate this dish using my home cooking tastes and tendencies. Which is local, seasonal, and as sustainably, naturally, humanely produced as possible. Following these standards I can’t guarantee exactitute, but I can guarantee deliciousness. It just works out that way, most of the time. Take for example these heirloom fingerling potatoes, at Berried Treasures’ Union Square Greenmarket stand. An unexpected find, these pebble-shaped, baby potatoes were promised to be red both on the inside and out, and “creamy” in texture. 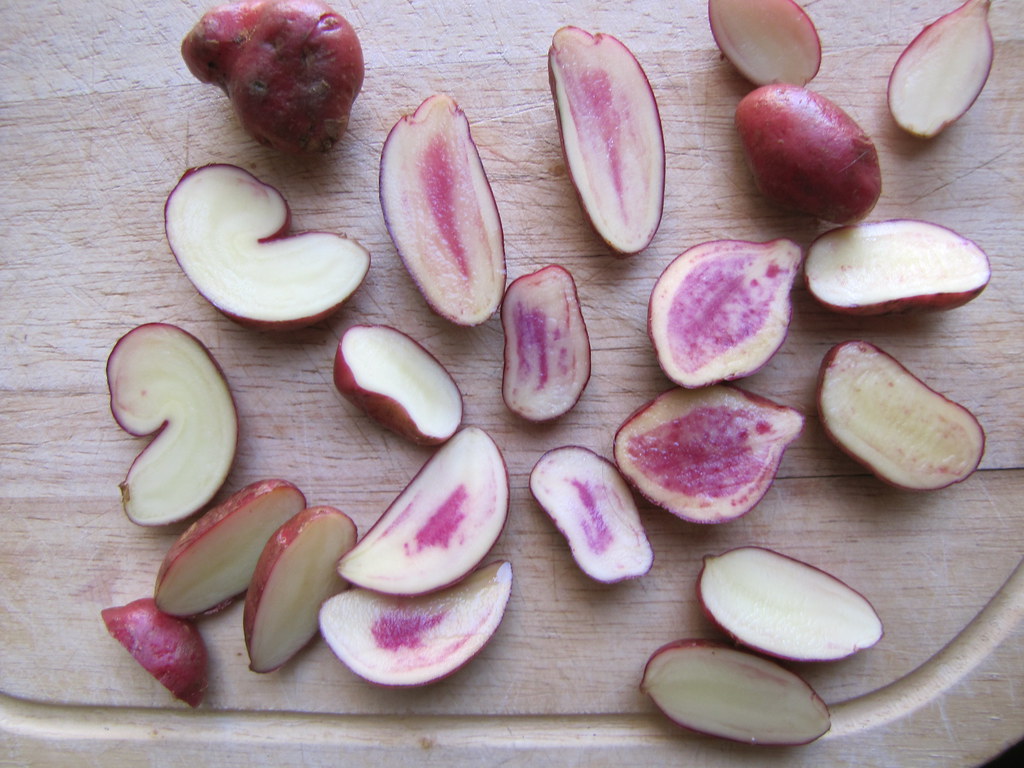 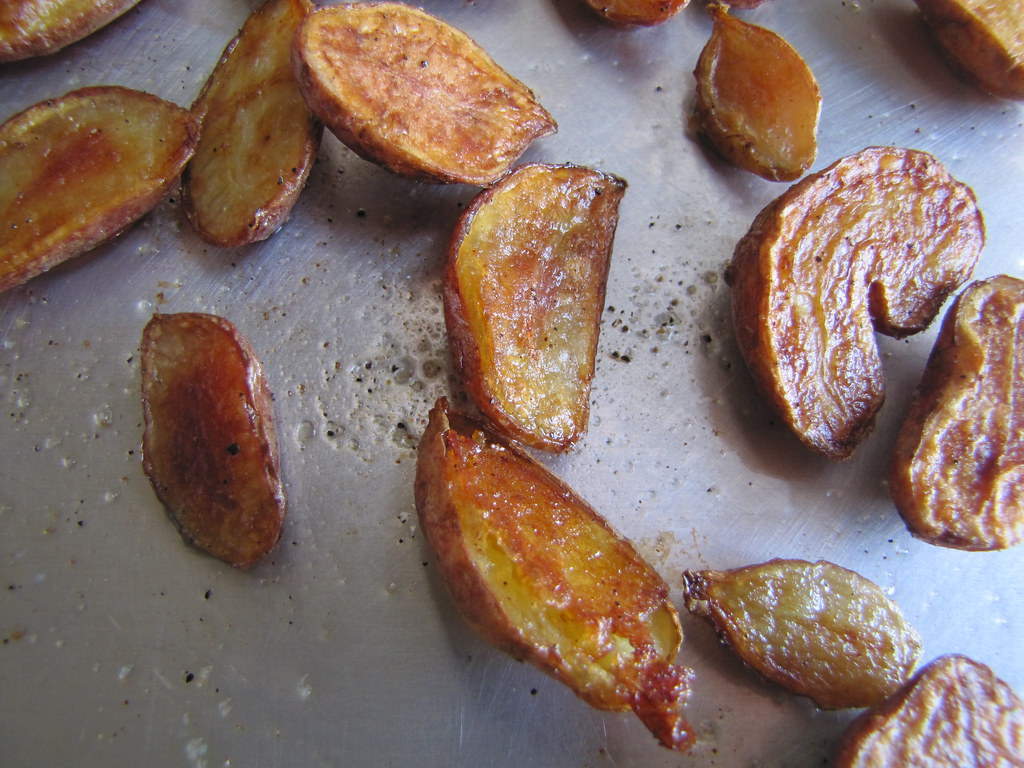 
They did not disappoint. Roasted for barely ten minutes, in a coating of olive oil, sea salt and pepper, these potatoes were so utterly tasty that I would have been happy with a plate full of those. They seem to be pretty low in starches, and had a slightly sweet flavor, so they reminded me just a tiny bit of sunchokes. The farmer, Franca, at Berried Treasures was so proud of her agricultural artwork that she convinced me to come back in a couple months for the best strawberries of the season. I can’t wait. (Their ramps were really the most beautiful at the market that day, too.)

I’d grabbed the tiniest potatoes, because I wanted them to be about the same size as other stuff in the salad. Which meant: octopus, chorizo, and preserved lemon. Well, I found my chorizo at the Greenmarket, too. Although it wasn’t the hard, dry-cured style of chorizo that I suspect Stone Park would put in their salad. Some chorizo is sold fresh, in soft, fat links that are great for grilling. As for slicing them up, once cooked, to toss into a salad, I wasn’t sure how well that would work — they would crumble. But anyway, that’s what I found at Arcadian Pastures, where the ever-kind farmer Laurent was working. And that’s what I got. 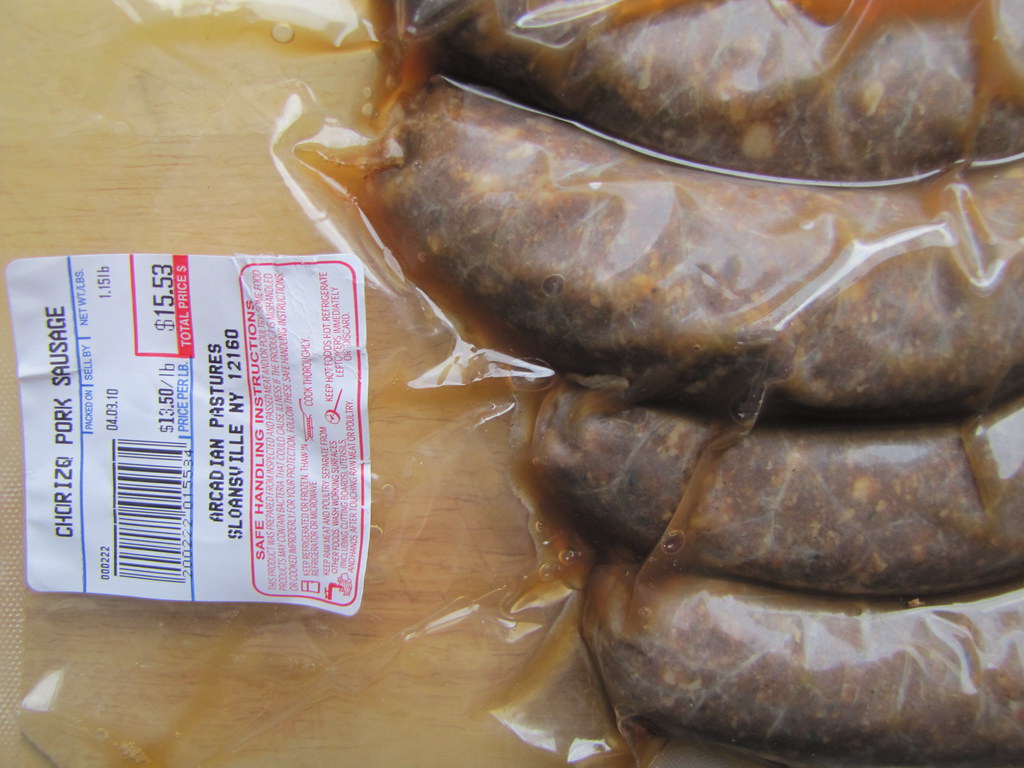 Next, it was onto the main attraction, the octopus. I had an idea that octopus are not commonly caught in this region, and it was confirmed when I went to Blue Moon Fish‘s stand. This is a Long Island fishery, and they sell the freshest fish caught the old-fashioned way year-round at the market. Luckily, they did have squid, which is not such a far cry from octopus, culinarily speaking. It’s also a “good” alternative according to Seafood Watch, because octopus are often caught in harmful bottom trawls. So squid it was for this dish — a squid salad instead of octopus. And how fortunate that the squid only cost me $6.95 a pound. I took it home and barely used half of it for one serving. 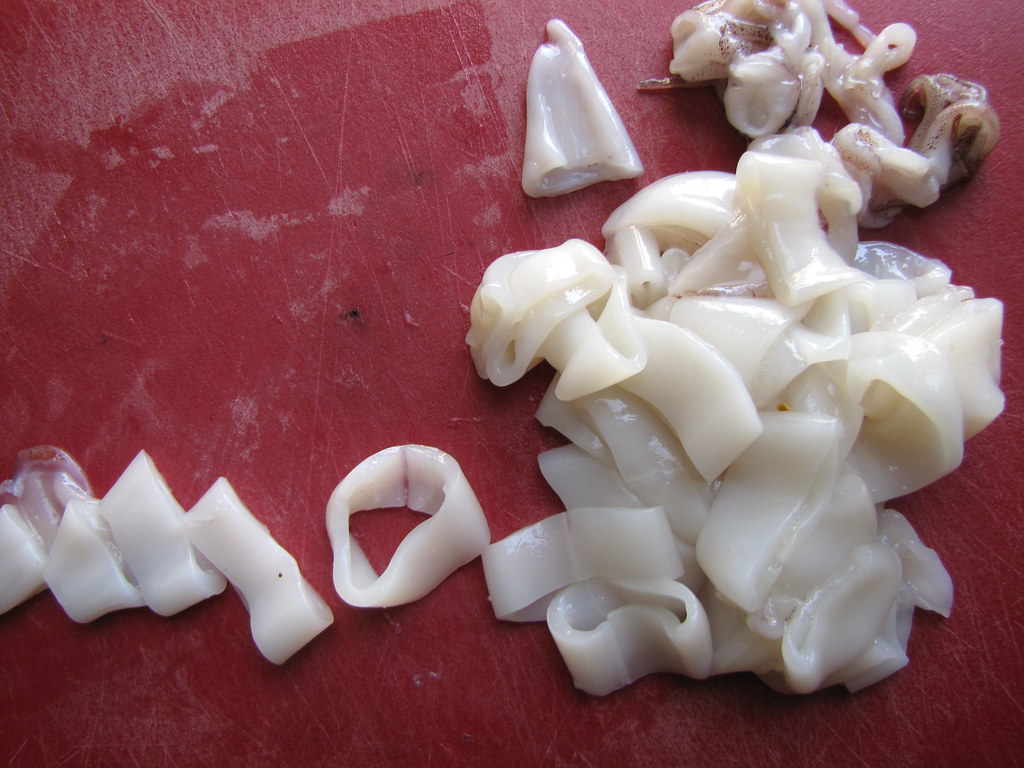 squid (aka calamari) is chopped into rings 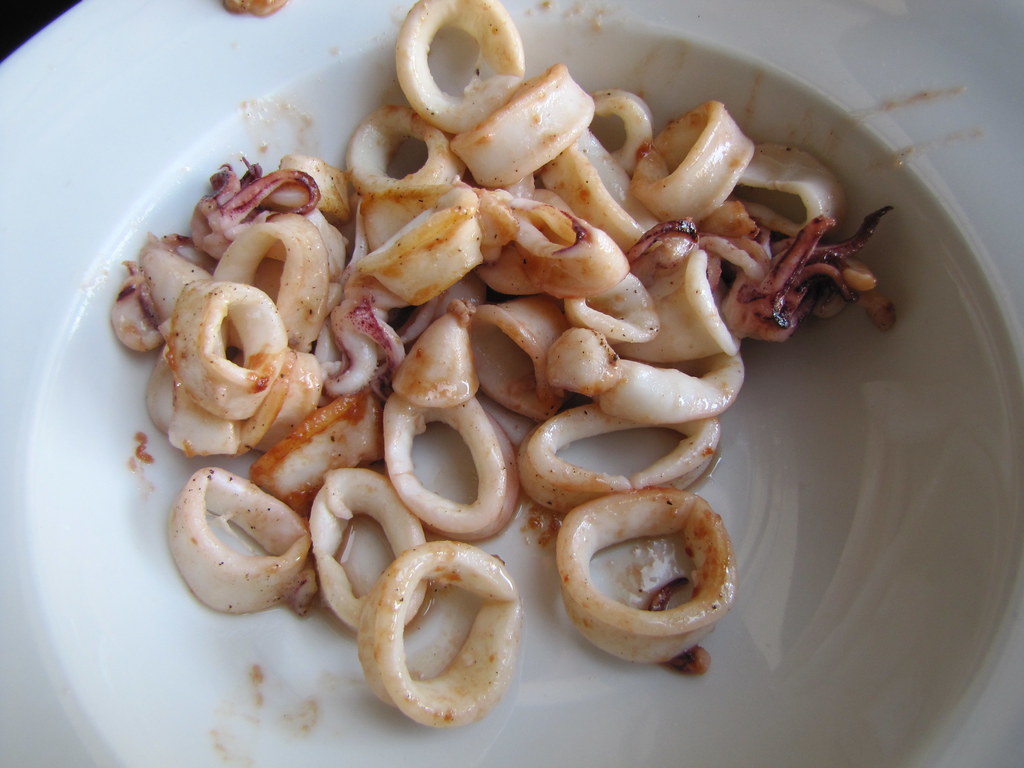 
Now the key to cooking squid is to not overcook it. Or else it will be rubbery instead of soft and sort-of chewy, but easy to bite clean. They should also smell a bit like shrimp once cooked, but not make your whole apartment overly fishy-smelling. This should be easier to do than the other way around, but timing is crucial, so pay attention, and get set to take them off the pan soon. Since I didn’t have a grill, what I did was chop the squid into rings first (the tentacles can stay intact, my favorite part). I doused them with a little olive oil, salt and pepper, and fired up a cast-iron skillet until really hot. The squid was placed down, and not touched for about thirty seconds. Afterward, you can flip them, and if you see brownish spots on the bottom, you’ve done good. Give them another few seconds on the pan until they’re all opaque white and no longer translucent, and remove. 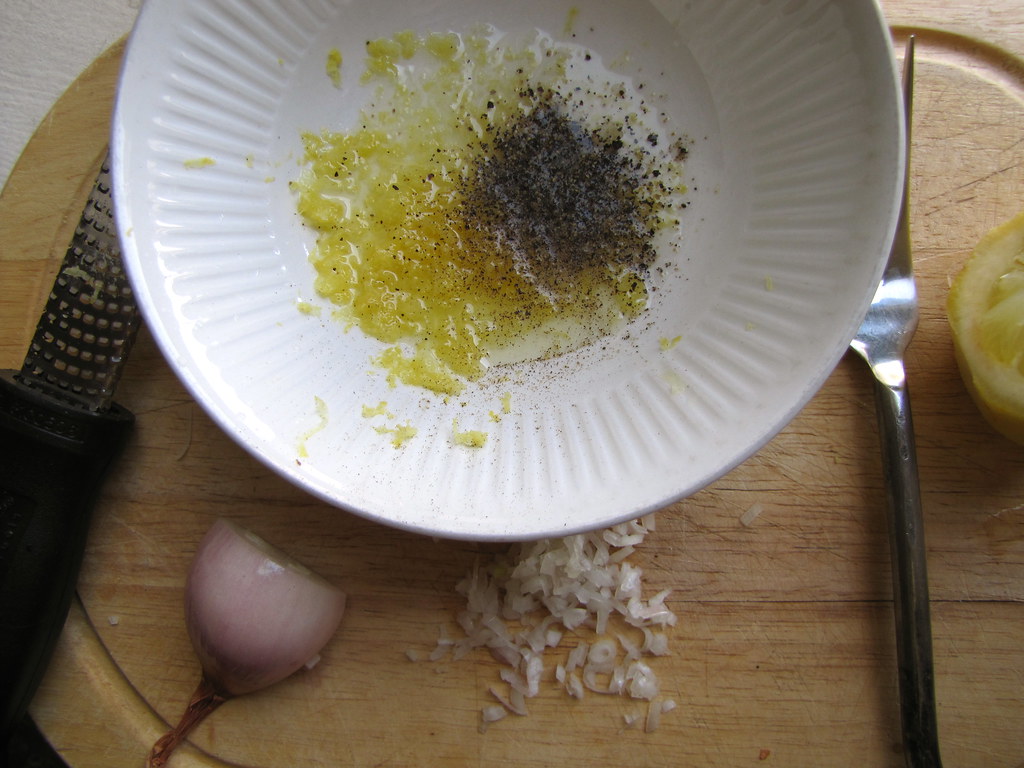 The “cracked pepper vinaigrette” sounded pretty simple, so I worked on that while the squid — and the roasted potatoes — cooled. Instead of preserved lemon, I went with regular, fresh lemon, because that’s just the most readily available to the home cook. You can certainly make them at home if you have the time, and the Meyer lemons, which are more authentic to this Moroccan cooking staple. But fresh lemon juice and zest sounded like a good enough complement to this seafood salad to me. So I grated about half a lemon’s worth of zest and squeezed its juice into a bowl, and whisked that with olive oil, lots of coarse black pepper, chopped shallots, and a pinch of salt. Now it was time to toss. 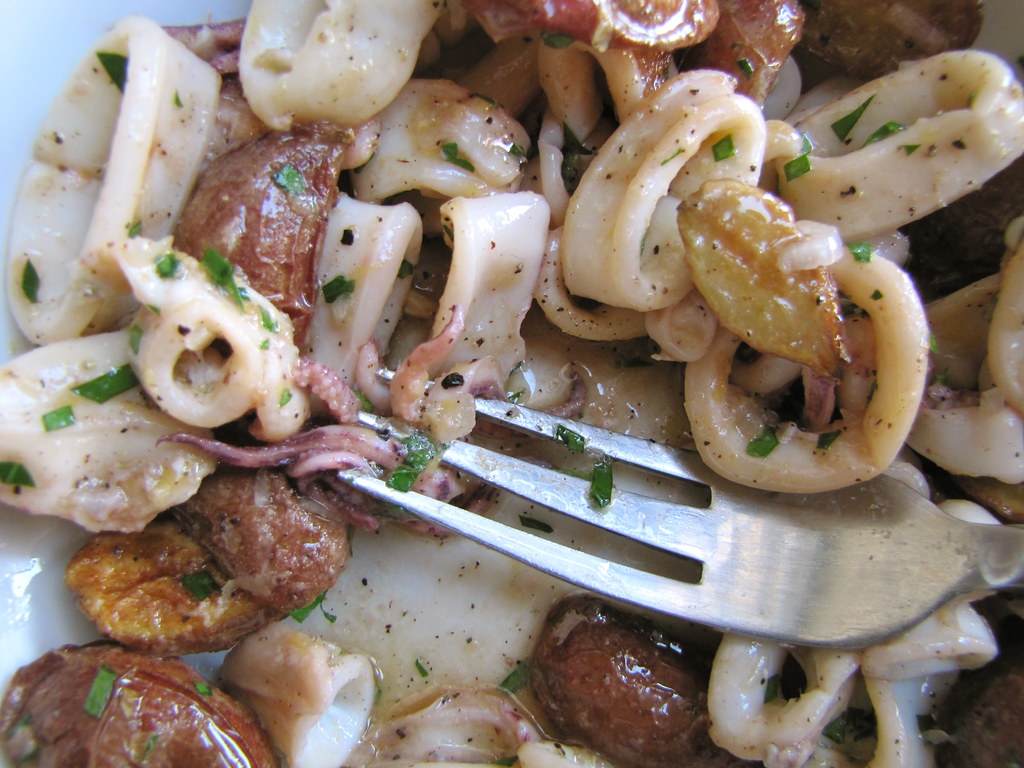 You might be wondering about now, what about the chorizo? Well, in my excitement to eat this dish as soon as those potatoes came out of the oven, I forgot about the chorizo links entirely. They remain in my freezer, for a future use. I didn’t even remember it until after I had polished off a whole plate full of this salad, taking photos intermittently. It was that good. And because it was so good, I don’t think it needs the chorizo at all. I’d zealously salted and peppered everything in it, and was afraid I might have over-salted. Instead, it was just right, and the viscous sauce created from the squid’s juices and the dressing combined was tart and super-tasty. Plenty of flavor for me, here.

Granted, I have not been to Stone Park Cafe to try this dish out. Or, at least not yet. But I plan to check it out pretty soon. As you can tell from the recipe’s Cost Calculator below, this homemade version (albeit without chorizo) came to a skimpy total compared to the restaurant’s. But I’d still like to try theirs, and see what else I may be missing. Anything else on the menu that I should try?

Preheat oven to 400 degrees. Season the squid in a bowl with about 1 tablespoon olive oil, and a generous pinch each salt and pepper. Toss the potatoes in another 1-2 tablespoons olive oil, and a generous pinch of salt and pepper and place flat side-down on a tray. Roast for about 6 minutes before checking and flipping to see if they’ve browned on the bottom. Depending on size of potatoes, cook another couple minutes, or until decently browned and tender. Remove and let cool.

Heat a heavy-bottomed or cast-iron pan or griddle over a high flame. Once very hot, add the squid in a single layer, so that each piece gets surface space. Don’t move for about 30 seconds to a minute. Afterward, flip and let cook about another minute, or until the squid is no longer translucent in any parts. Remove immediately from pan and let cool.

Whisk the lemon juice, zest, shallot, coarsely ground pepper and a pinch of salt in a bowl, and drizzle in about 2 tablespoons of olive oil while whisking until emulsified. Toss with the squid and potatoes, and finish with a generous garnish of fresh parsley.

Six brownie points: This deserves credit for being relatively light for such a tasty, restaurant-style appetizer. But it has its share of cholesterol, thanks to those found naturally in most shellfish, like squid. It’s a good thing that we forgot the chorizo for this health factor rating, for sure, as that would have added much more. What’s helping balance that out is that the rest of the fat here is heart-healthy olive oil, and the omega-3 found in all seafood, too. The potatoes make the dish more filling; it should work as an entree, even, and the more parsley you add, the more leafy-green vitamins you get, so go crazy here.

Eight maple leaves: A high score for the local and seasonal produce, with the only exception being the seasonings: lemon, olive oil, salt, and the profusion of black pepper. Squid is available year-round at Blue Moon Fish, too, and I would presume then that it’s kept frozen as such. The potatoes were on their last legs of the winter season at Berried Treasures; be sure to check out their new offerings once berry season’s back.