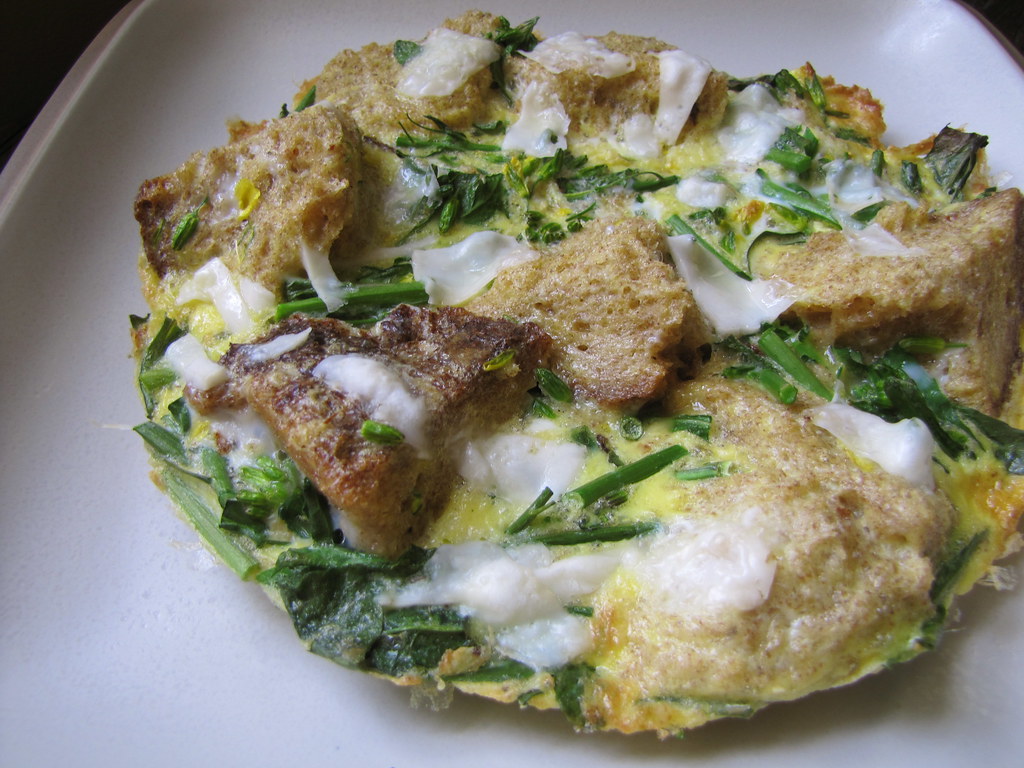 Two ingredients thought to be past their prime — the broccoli plant, once it’s gone to flower, and bread, a few days since baking — revitalized. I do love using up food scraps. This recipe came after a few rounds of making really good bread pudding. Could anyone have conceived of a better way to use stale bread than that? I wondered. Then I began to think of French toast, and how custardy and warm the centers of those thick slices get. How crisp the outside is, grilled in butter. And how quick it is to cook this in a pan, as opposed to the pudding, which must be baked. So it was French toast, with a savory twist the next morning: this frittata, with a local green that’s particular to spring.


It looks a bit like the flowering Chinese greens yu choy or Chinese broccoli with ultra-thin stalks, but these yellow-flowered plants I found last week at the D&J Organics stand at Union Square Greenmarket were neither of the above. It’s flowering common broccoli, and you can eat it, alright. It’s just not generally thought to be as good as the broccoli was in its prior state by a couple weeks, when its flowers were densely packed and very little, or “florets.” It’s a common gardening mishap — “I didn’t harvest my broccoli early enough and now they’ve got all these yellow flowers instead” — can be found among the woes of many home gardening forums. Well, here’s one solution to them: eat the flowers instead. 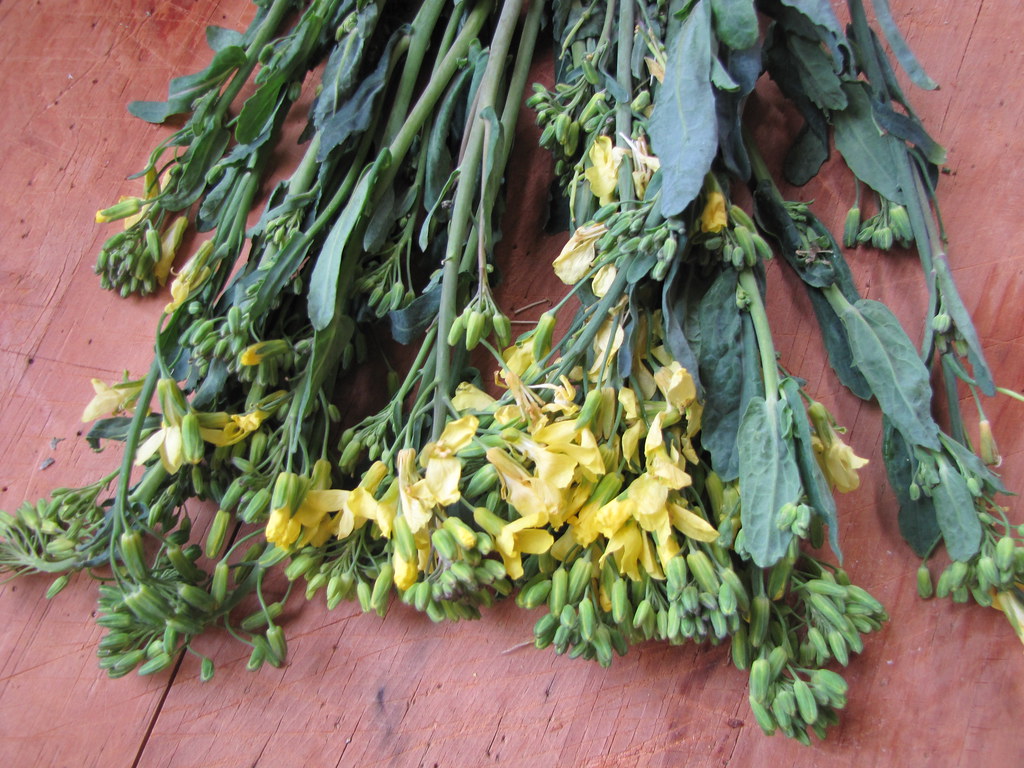 I do have to admit, the stems are very tough, almost choke-worthy. It needs a good sautee before you do anything else with it first. (Or, perhaps a quick blanch in boiling water.) You can also strip the yellow flowers, green leaves, and remaining loose clusters of florets from the stem entirely, because they’re very delicate. I took the first approach, chopping up the bunch first, and tossing it in a pan sizzling with butter, with sprinkles of salt. Next, the scrambled eggs, which had spongelike mounds of torn-up, dry bread soaking in them already, was poured straight in. A few nudges with a spatula, a sprinkle of Pecorino cheese, and the whole assembly was moved under the broiler for a just few minutes more. 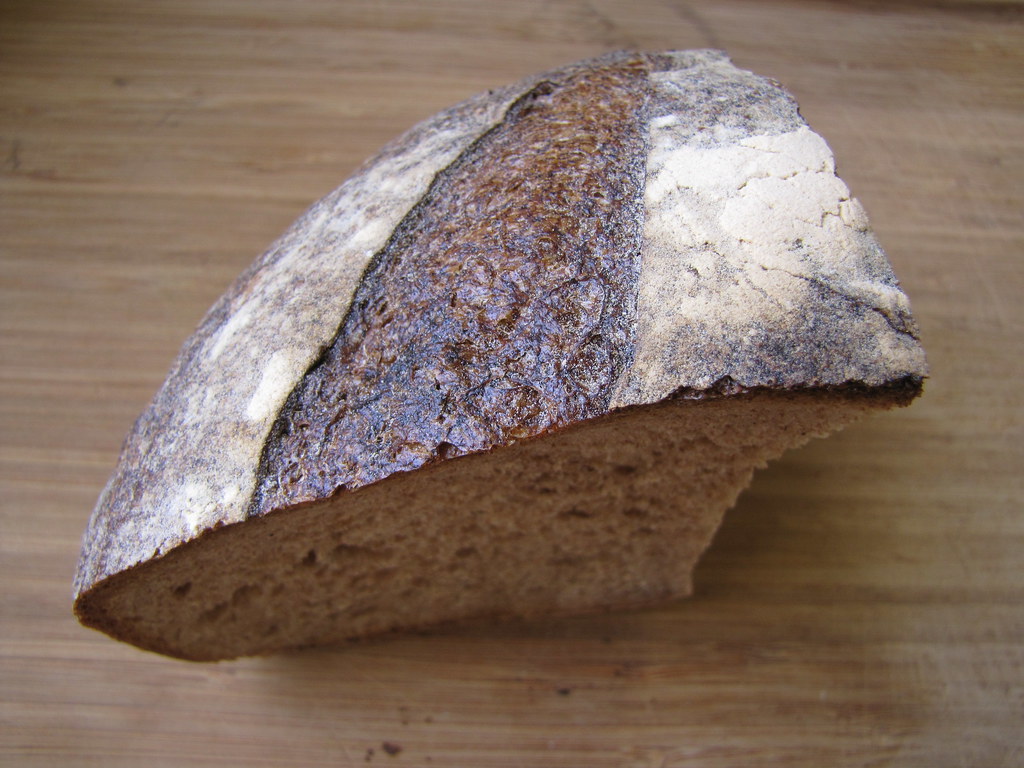 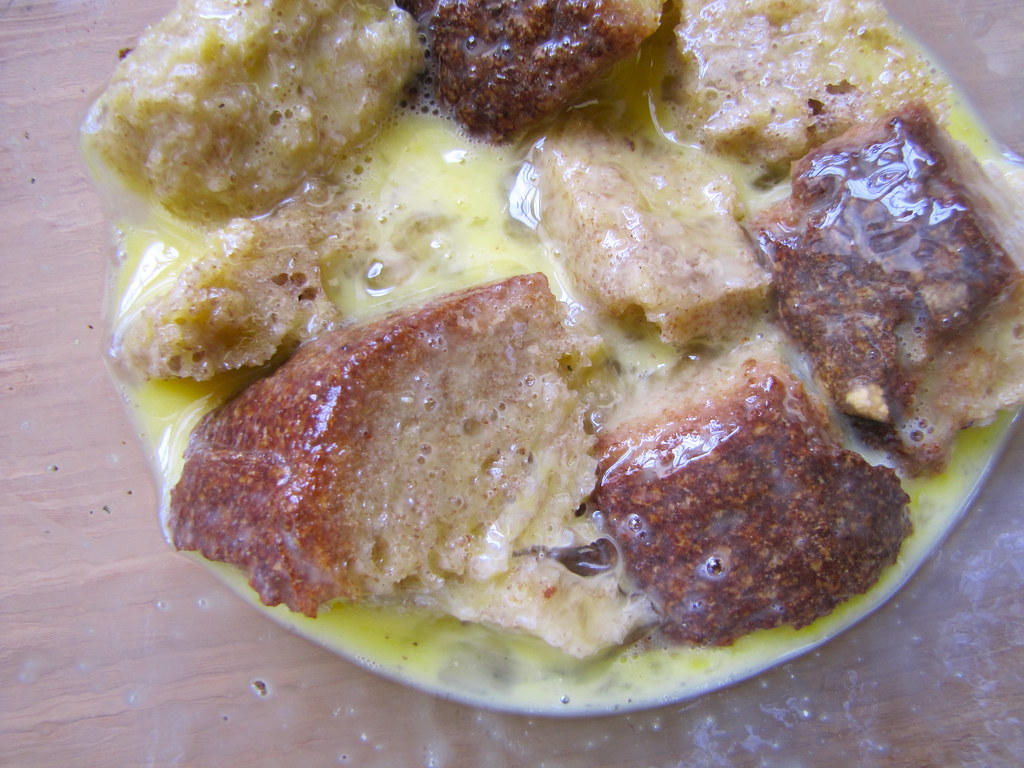 torn to pieces and soaked in scrambled eggs


Cooked through, and let to cool, I took a tentative first taste. Flowering broccoli has none of the cabbagey flavor of its former state, I decided. Which can be either a good thing or bad, depending on your preference. In any case, the flowers do look very nice, and it’s pretty fun to eat flowers in my opinion instead of putting them in a vase. Next, the bread. Now this had been stale, very stale, sourdough bread, and it was nearly stiffened through. For that reason, it held up while being soaked in scrambled eggs instead of dissolving or turning to mush. But once cooked, the beaten egg batter filled all the bread’s crevices and puffed it up in a way that sort of simulated its freshly baked state. Altogether, pretty neat. 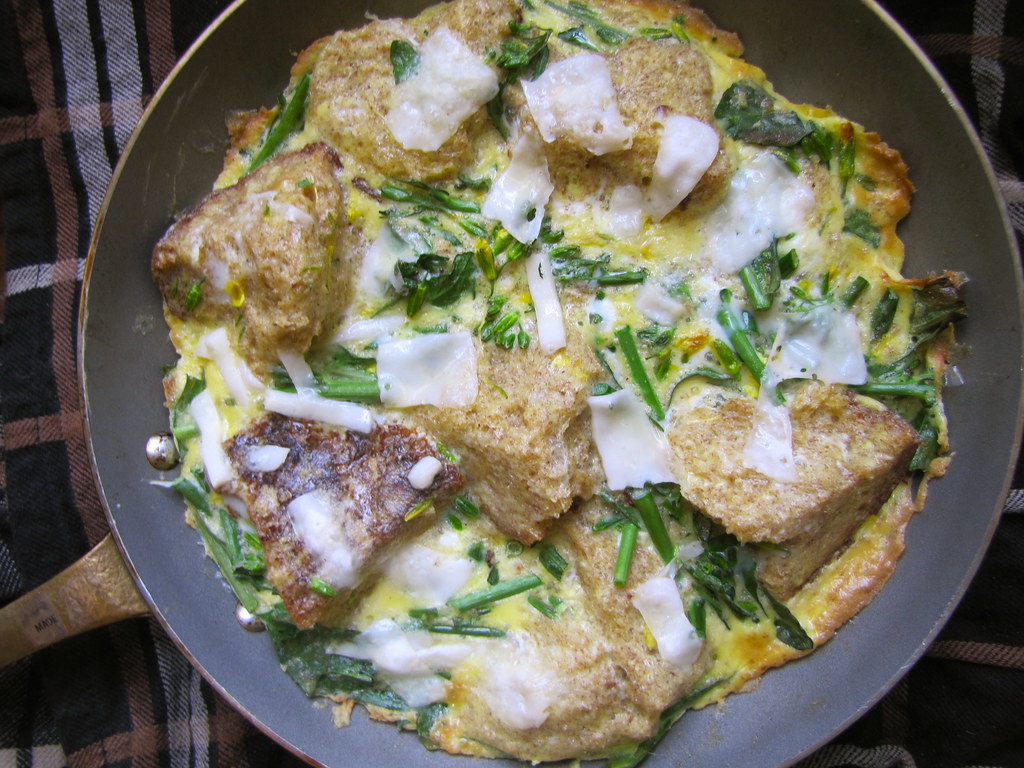 Nom nom nom… until the next leftover that needs to find another life.

Beat the eggs in a bowl and season with salt, pepper and optional red pepper flakes. Add the bread pieces and press down to soak them.

Heat about 1 tablespoon of the butter in an oven-safe, medium saute pan over medium-high, and add the flowering broccoli. Season with a pinch of salt and pepper, and cook, stirring, 2-3 minutes. If the pan has gotten very dry, add a little more butter, before pouring in the egg and bread mixture. Stir away from the sides of the pan a few times to evenly cook the eggs a bit. Preheat the broiler. After about 2-3 minutes of cooking, stirring occasionally, sprinkle on the cheese and transfer the pan to the broiler. Let cook another 2-3 minutes. Remove from oven, and poke center with a fork to check if the eggs are cooked through. If not, let cook a little while longer. Remove from oven and let cool a couple minutes before serving.

Five brownie points: Don’t be fooled by the super-sized looking portion, it’s mostly from the great lumps of just bread. Which, of course, is lower in cholesterol than eggs alone, and makes for a meal-in-one with its addition of carbs. Flowering broccoli is leafy, and its leaves are filled with Vitamin K and many nutrients found in other dark greens; it’ll probably have some half-formed flowers, half-florets on it still, which are good sources of those, too, although its yellow leaves are less beneficial.

Eight brownie points: You may be able to find flowering broccoli this time of year in specialty or farmers’ markets, as I did, but I wouldn’t bank on it being in conventional groceries, so this is by design a fairly local meal. The eggs and bread were also local and organic, from the Greenmarket. And cheers for using up old bread, rather than tossing the hardened chunk away.