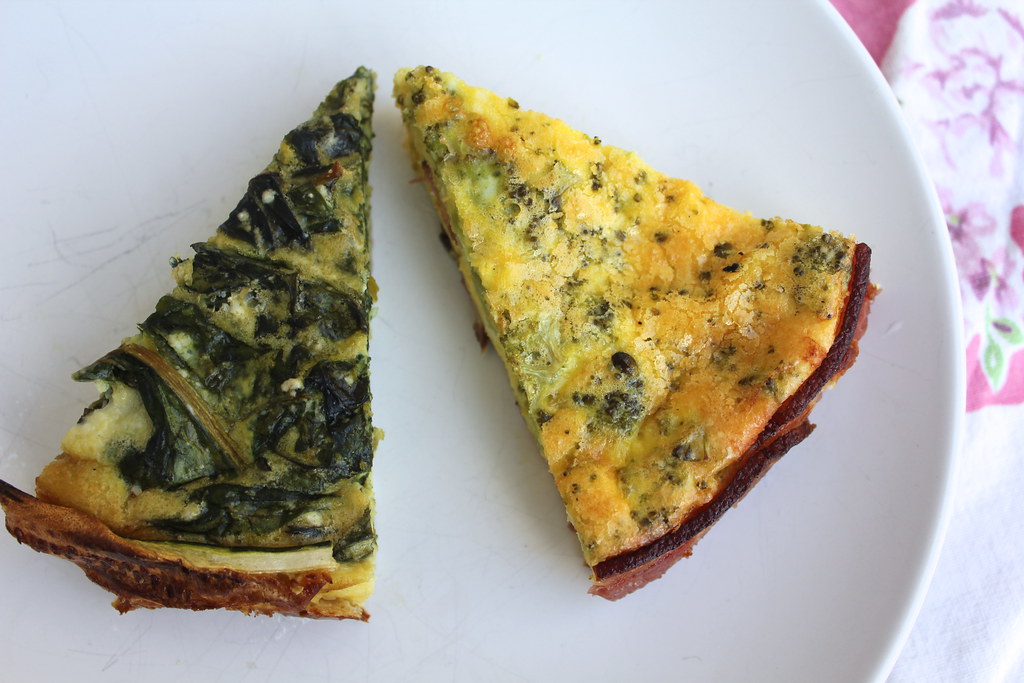 
Perhaps the only defining aspect of a quiche—as opposed to an omelet, soufflé, frittata, or tortilla espagnola—is that it’s framed with a buttery pastry crust. Yes, the eggs should be beaten ’til light and airy, enriched with some dairy, and more often than not, studded with additions like vegetables, cheese and bacon. But I didn’t use pastry for the crust. Instead, I used bacon or vegetables to line its dish with and bake until browned and crisp, like a crust.

You get a carb-free, gluten-free, flavorful result and skip the chore of cutting butter into flour, rolling out the dough, and crimping the edge. I am not opposed to the latter tasks—I love making pies!—but when I arrived at an engagement party that I was assigned to make two quiches for less than thirty minutes before it began, armed with only with a bagful of groceries I’d bought at the Greenmarket on my bike ride over, I was pretty glad I wouldn’t be crimping any crusts. 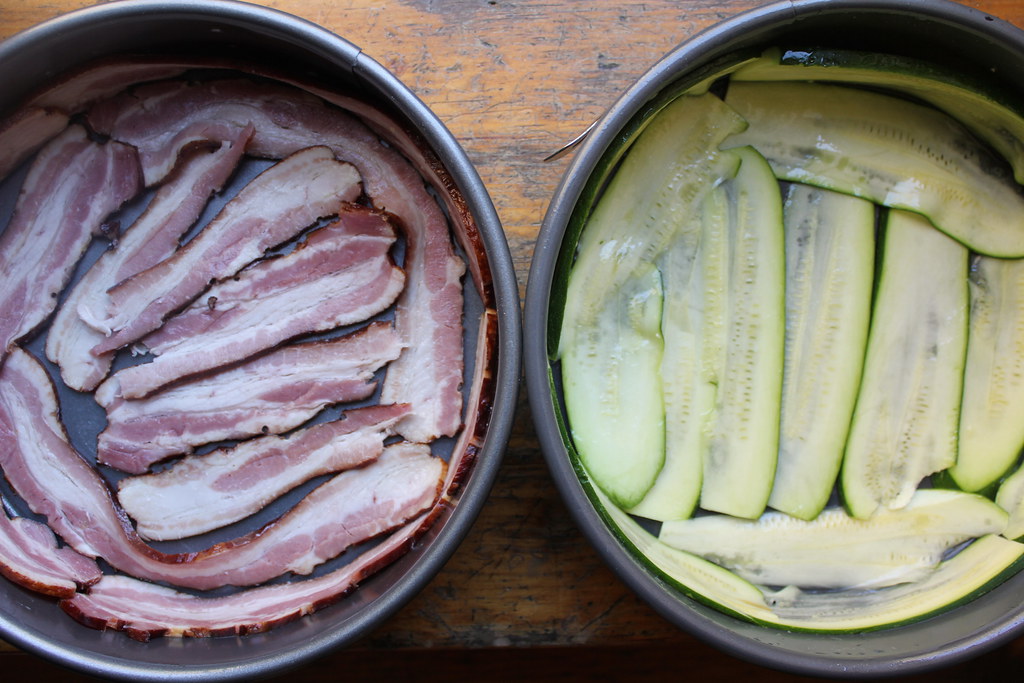 Would it work? Surely, these pieces wouldn’t hold beaten-egg batter so tightly that it wouldn’t seep through. But the pans, greased lightly with oil, would do the rest of that work. Would the bacon and zucchini slices crisp, though? Would they be soggy or stick? That question had to wait about forty minutes and at 350 degrees to have an answer. 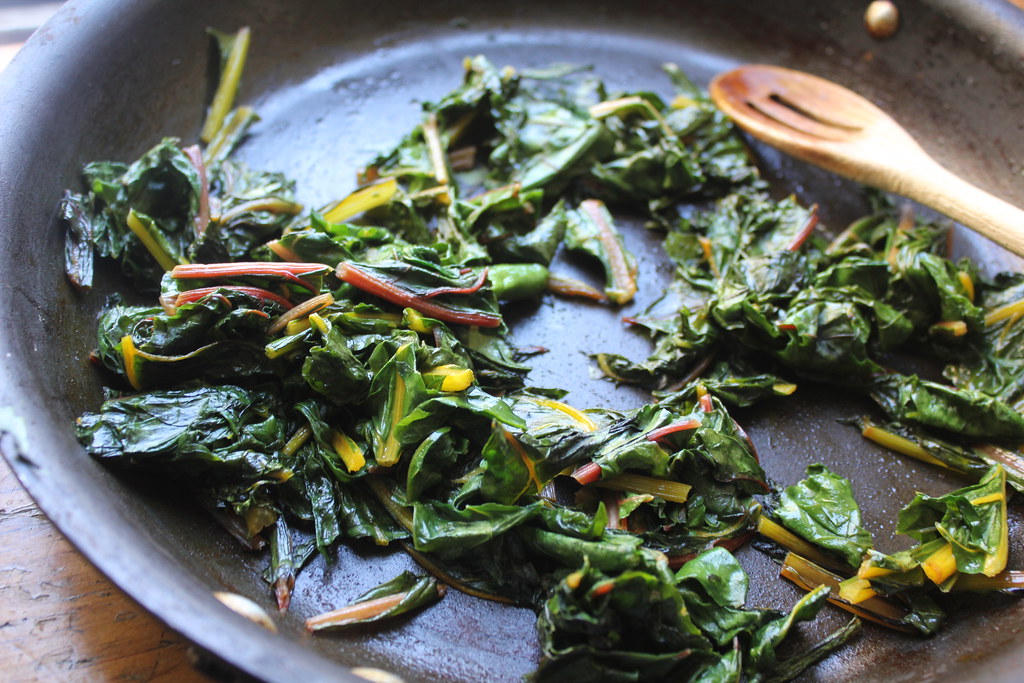 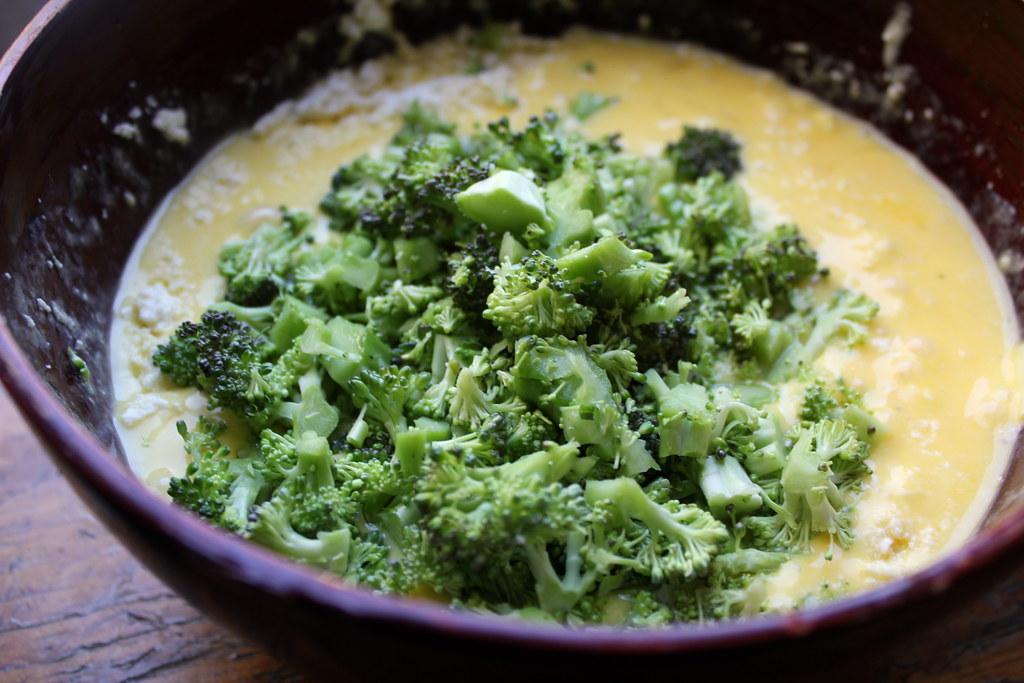 Meanwhile, more market finds needed to be prepared for the quiches. Some broccoli was chopped raw, to toss into a creamy batter of eggs and creme fraiche. A bunch of rainbow chard was chopped, sauteed and cooled down before folding into another batter, with some crumbled cheese. Caramelized onions would have been nice with either, but that task takes some serious time. So I skipped it.

The broccoli filling went with the bacon crust; the Swiss chard filling with the zucchini crust. More cheese was sprinkled on their tops and into the oven this pair of hopeful quiches-without-a-real-crust went. 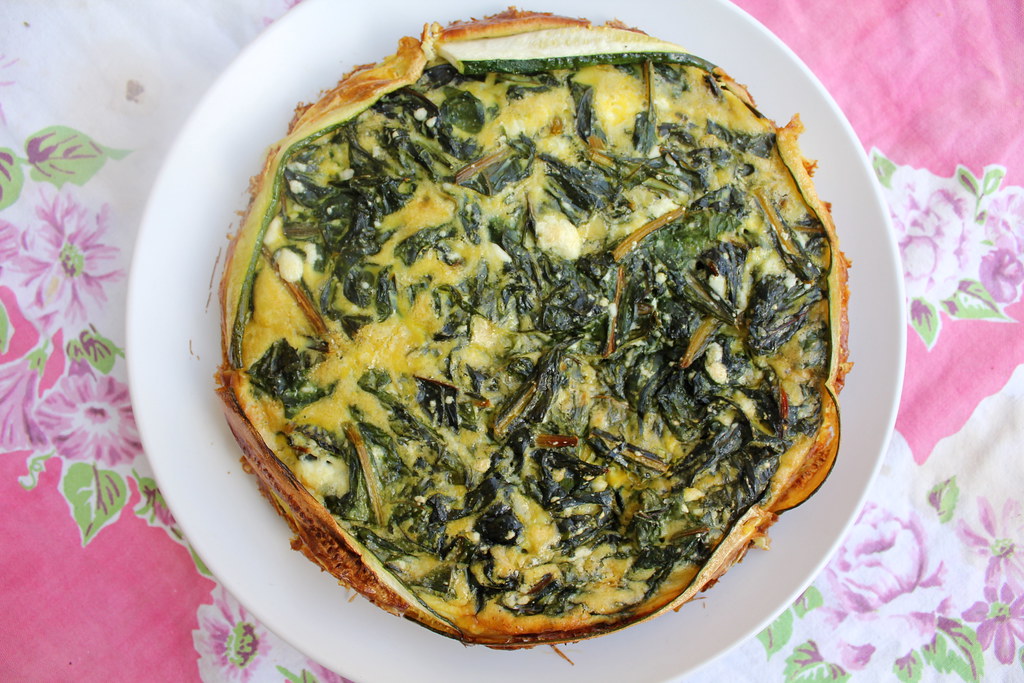 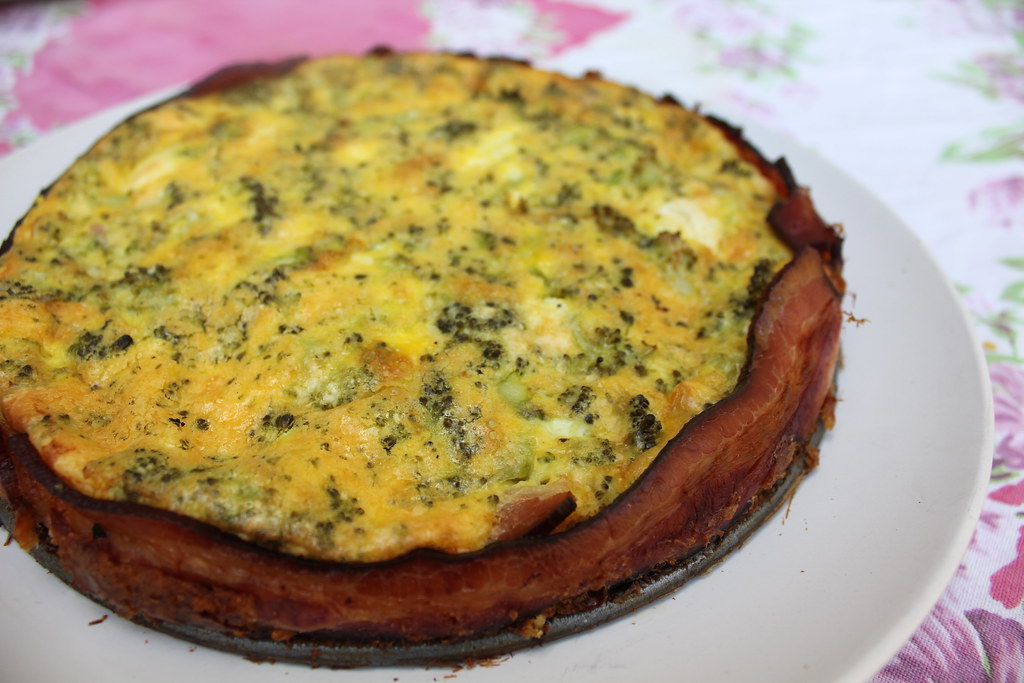 And out they came. I wasn’t sure if there was anyone who was gluten-free at this engagement party, but I  knew there would be some vegetarians, some meat and bacon-lovers, and some who were either/or depending on the day. So the duo would satisfy either persuasion, and/or. But did the eggs cook through in such time that the bacon or zucchini would get crispy but not burnt? Apparently so. The edges did need some prodding with a spatula before they could break cleanly from their mold, but no more than any cakes baked in those pans would. But can you make this in a regular pie pan rather than a spring-form cake pan? I have no idea! I played it safe because I knew these metal, spring-form pans were thinner than my ceramic or Pyrex pie pans, and hence would brown the edges of its contents more easily. Also, because they spring apart and allow the final cake (or quiche) to be presented on a platter nicely, with a browned crust. Also, because I liked the idea of a taller, thicker quiche rather than a flatter disc of eggs with mostly pastry crust. 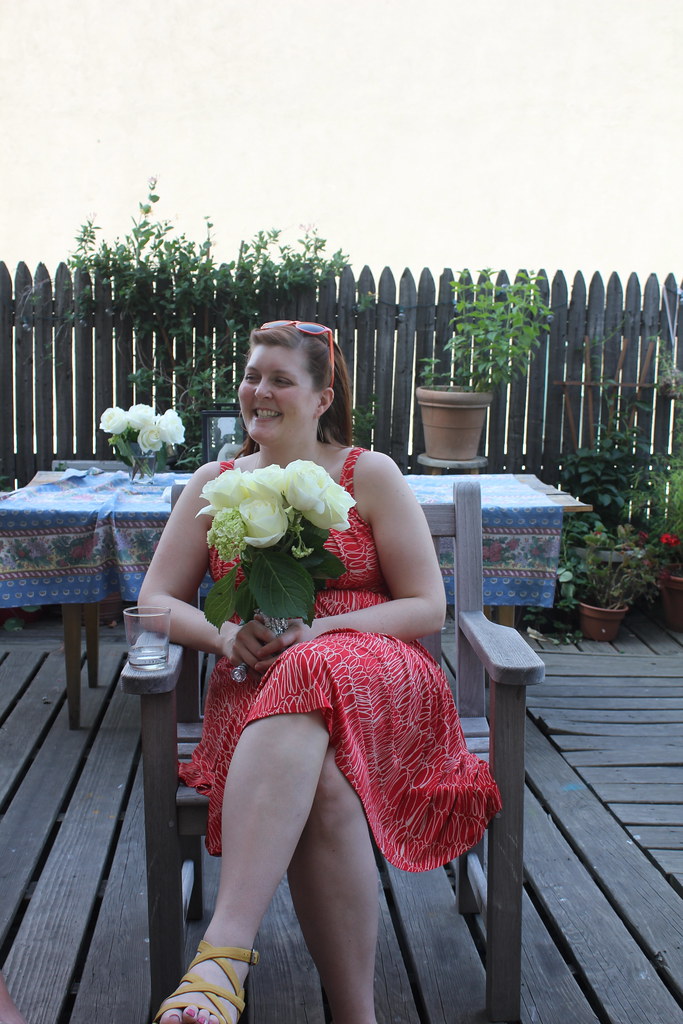 So give it a try, if you don’t have these spring-form cake pans, and do share your results. I would love to hear. But if you’re running off to a party, or just need to think of something quick to make your quiche-making work even more quick, try these tried-and-tested recipes out. Real quiche can wait for another day (or for the menfolk? Or especially not?). Because these women, at least, appreciated some not-so quiche for what that’s worth. And to me, that’s worth pretty much everything. Here’s our beautiful bride-to-be, Jennie.

Preheat oven to 35o degrees. Grease a 9-inch spring-form cake pan along its interior with the oil. Arrange a single layer of the bacon slices around the bottom vertical edges of the pan, so that they reach a height of about 1 1/2″. Arrange the remaining bacon in a single layer across the bottom of the pan.

Beat the eggs, dairy, salt, and pepper. Stir in the grated cheese and chopped broccoli. Pour the mixture into the prepared pan with the bacon. Place in the bottom rack of the oven and bake for 35-40 minutes, or until the middle of the quiche can be inserted with a toothpick and come out cleanly. Let cool a few minutes. Loosen the bacon edges of the pan with a spatula and unlock the pan. Transfer to a flat plate and cut into wedges for serving.

No-Pastry Quiche with Swiss Chard, Cheese and a Zucchini Crust
(makes one 9-inch quiche, about 8 servings)

Heat 1 tablespoon of the oil in a frying pan or skillet over medium-high heat. Once hot, add the chopped Swiss chard or spinach. Add a pinch of salt and pepper and stir after ten seconds or so, and continue to stir occasionally until the greens are fully wilted and the liquid has been released and evaporated, about 3-4 minutes. Let cool at least 10 minutes.

Beat the eggs, dairy, salt, and pepper. Stir in the crumbled or grated cheese and sauteed and cooled Swiss chard. Pour the mixture into the prepared pan with the bacon. Place in the bottom rack of the oven and bake for 35-40 minutes, or until the middle of the quiche can be inserted with a toothpick and come out cleanly. Let cool a few minutes. Loosen the edges of the pan with a spatula and unlock the pan. Transfer to a flat plate and cut into wedges for serving.

Cost Calculator
(for 2 quiches, or 16 servings)

Six brownie points: Those who ate the Swiss chard and zucchini quiche noted that there was so much chard packed into the quiche in proportion to eggs, so it was almost like a veggie side. This looked nice (especially thanks to those rainbow-colored stems) but also made the quiche very dense with leafy-green nutrition, like Vitamin K and Vitamin C. While broccoli is very healthy, the flavors of that bacon crust permeated throughout the quiche–and its cholesterol did as well. This version is surely the heavier of the two, but both quiches are free from a refined-flour and butter crust, eliminating some of those fats and carbohydrates found in a traditional quiche.

Eight maple leaves: I have to say that the quiches tasted so great because of great ingredients: fresh, free-range eggs and smoky bacon from Flying Pigs Farm, tangy creme fraiche from Ronnybrook Farm, and just-in-season early summer vegetables from the farmers market. What else did I use that didn’t come from that market run? Salt, pepper, and olive oil. An easy summer feat.