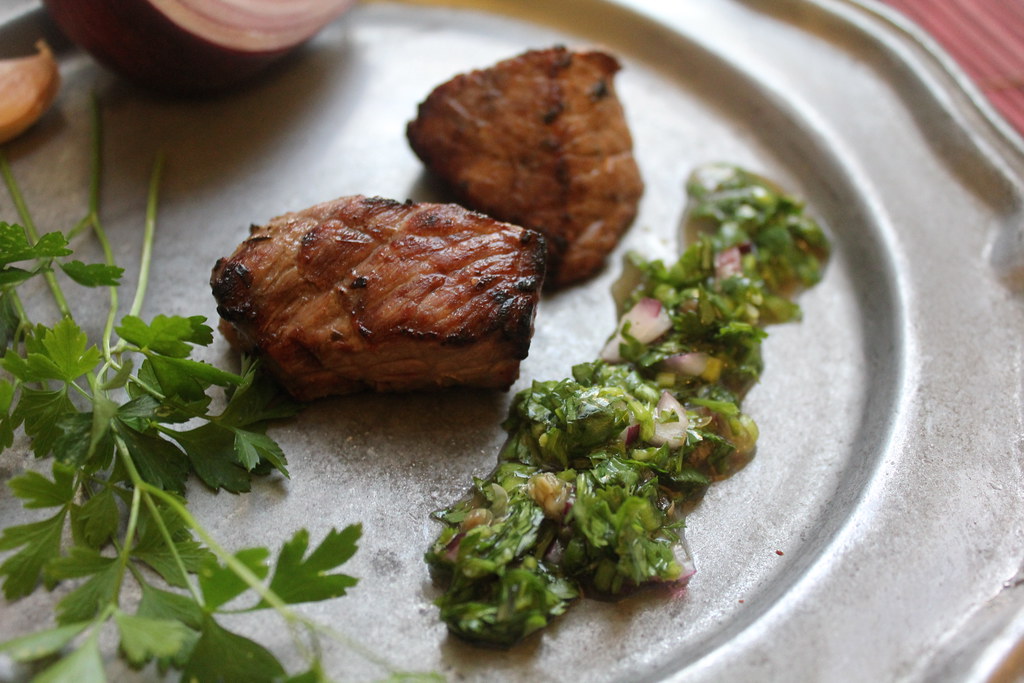 I’m not usually very vocal when it comes to sports. But I have been enjoying watching the World Cup lately, and soaking in the drama, intrigue, and high-stakes tension therein. It really is a fantastic spectacle–not only of physical agility, but of nationalism, sportsmanship, and other shared, global human values. Recently we saw a star player from Uruguay get banned from the game for four months for biting an opponent, because intentionally biting in football (or soccer to Yanks) is not okay. There were a lot of jokes to be made about this and righteous agreements or disagreements about its sanction. But biting, my friends, is primal: a primitive, crude, and universal urge. And so is barbecue.


So for a dish to prepare at my friends’ Fourth of July cookout (ahem, nationalism?), I thought I’d make barbecued skewers with a South American flair. Originally, I thought I’d make pork shoulder “bites” to grill at the party (because the Uruguay forward Luis Suarez gnashed his teeth into Italian defender Giorgio Chiellini’s shoulder), but actually, beef is much more prevalent when cooking traditional Uruguayan barbecue–or asado. So I went with the cut of beef that is essentially the shoulder, but that we usually name otherwise: chuck.

Chuck, like pork shoulder, is one of the gnarlier, less delicate cuts of animal. It has immense flavor from fat, but also toughness from tissue and sinew, and is usually prepared by slow and low-heat roasting or braising. If I were to make grilled steaks in true Uruguayan (or Argentinian, or other South American countries’) tradition, I would have kept the pieces large and left them to cook at low heat, developing smoky flavor from the fire and tenderness from the time. But I’m not going to do that this Fourth of July, because my friends have only one hibachi grill and its time is precious amongst us all. So I’m going to marinate that tough, shoulder cut of beef–chuck–well beforehand, to tenderize as well as flavor it sufficiently. 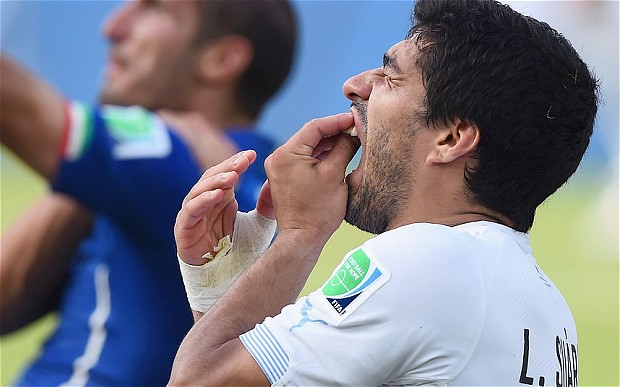 A brief aside on the biting incident at the World Cup, which this dish is made in honor of:
Now, I can totally understand a lapse in judgement when pent-up stresses and pure adrenaline kicks in for a professional athlete, manifesting in (what looks to us couch potatoes as) absurdly aggressive behavior. But to me, the most interesting thing about the Suarez-Chiellini bite was not how Fifa handed Suarez such a harsh punishment, nor even the bite itself. It was the way Suarez reacted just after avoidably chomping on the other player’s shoulder. He slunk to the ground awkwardly, and began a victim-playing charade of holding his head in misery and grabbing his teeth with a troubled expression as if to say, “My teeth hurt, so that must have been an accident, right?” It’s a pretty fascinating window into a certain human psyche, even if this facade happens to be common in sports. My mind sort of blew right then in ways that I didn’t know it could blow.

And speaking of ways to expand your mind, I will tell you from experience (which I’m clearly lacking with regards to athleticism), how a very tough cut of beef becomes tender, juicy, and unctuous when grilled on the fly. 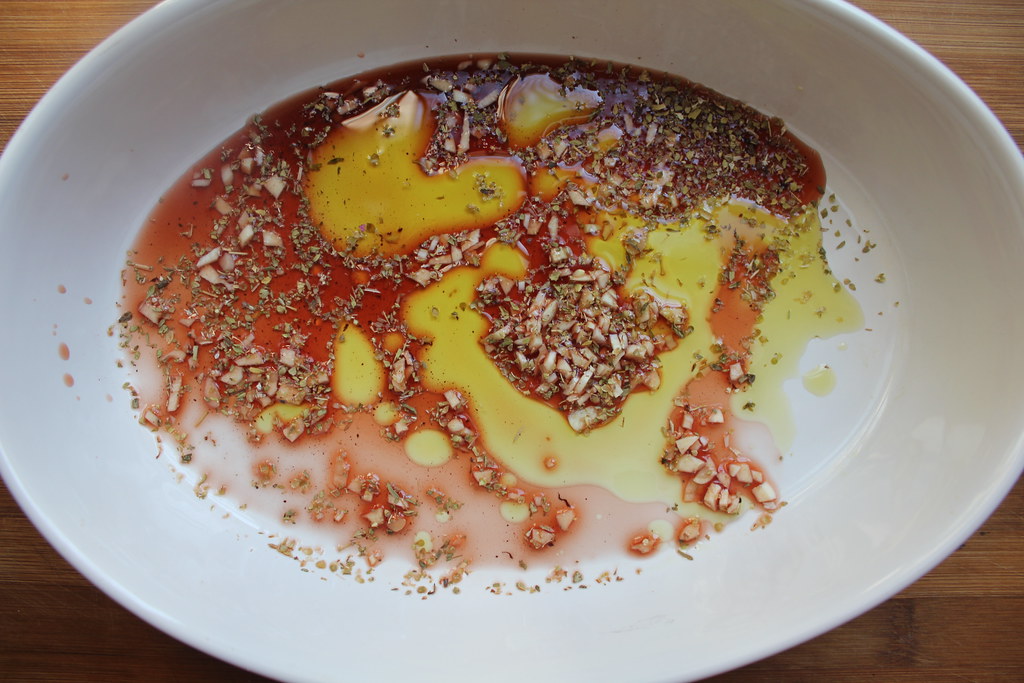 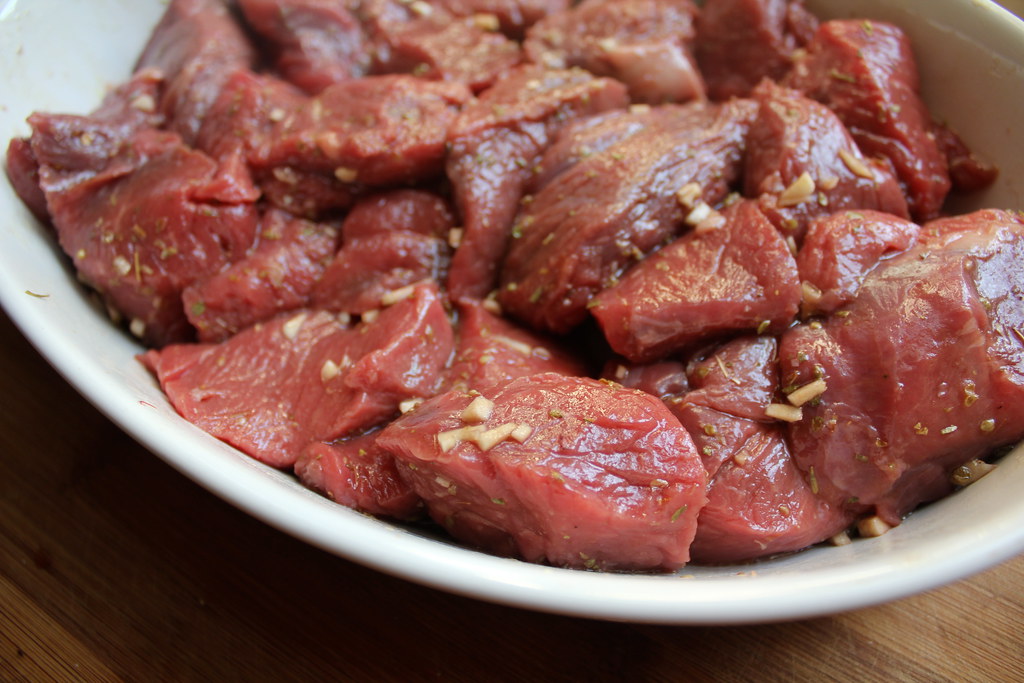 It comes down to a little key ingredient: acidity. Any wet marinade will help flavor meats, but a touch of acidity in it will help break down their proteins, resulting in less toughness, especially when quickly grilling. I learned this lesson well from yogurt in a marinade for tandoori lamb skewers once. I was initially afraid that the cut of lamb I’d chosen–shoulder, once again–would be too tough in the end as a skewer-sized bite, and people can be so iffy about lamb in any case that I felt it would have been safer to choose a more luxurious cut, like rib chops. But, if you are a fan of lamb, you might know well that rib chops are ridiculously expensive. There’s only so many chops to a lamb. However, shoulder meat is usually pretty flavorful, and cost-efficient, so I took a gamble on a big purchase of that instead (which must have equalled the cost of about four rib chops). After sitting in yogurt and spices for a day and a half, my lamb skewers were impossibly tender and tasty. 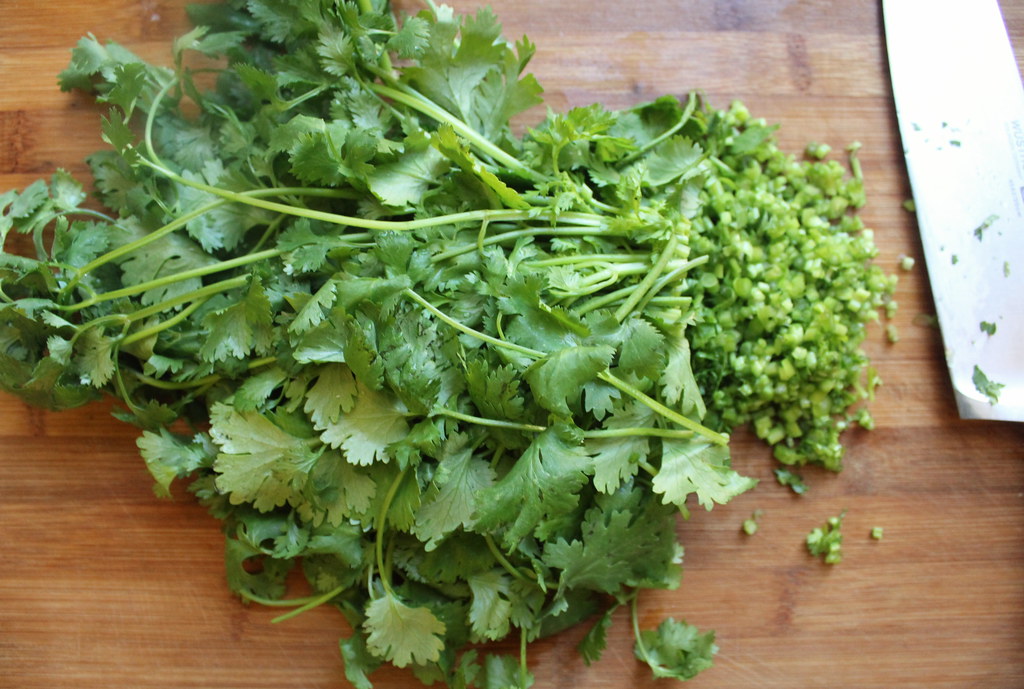 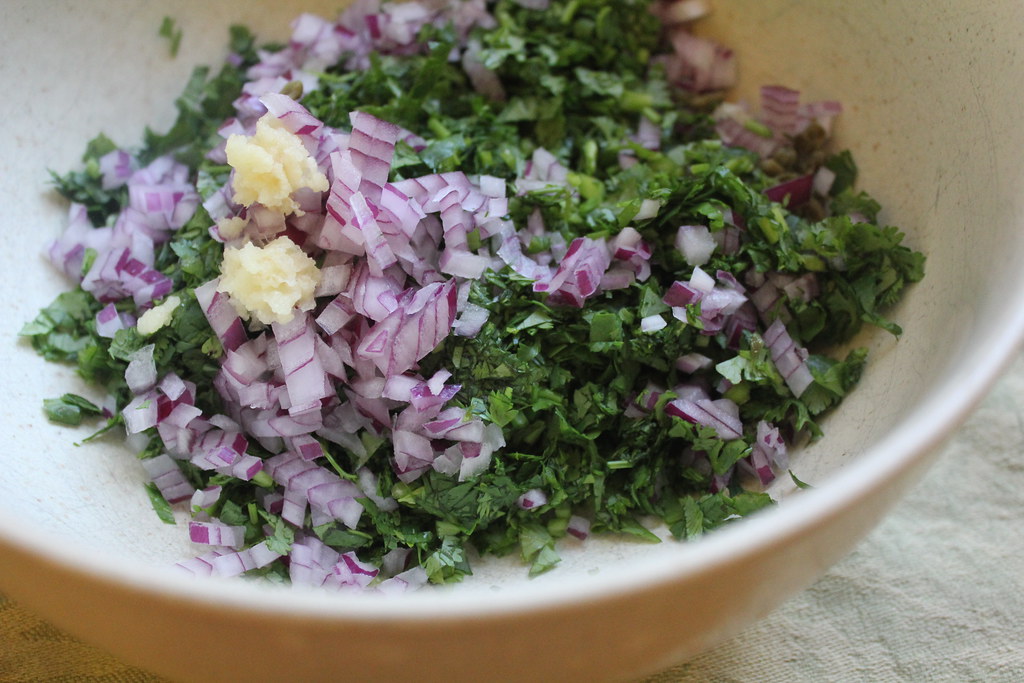 But a helpful and asado-appropriate marinade is not the only crutch for these beef skewers. Once off the grill, the morsels would be dipped in a fresh-herb based sauce, chimichurri. This homemade South American condiment is worlds better (and better for you) than whatever the sweet sludge is in most “steak sauces.” For the warm summer months, it’s especially refreshing. The bulk of the sauce is fresh herbs, often including cilantro and parsley, or any combination of those with others like fresh oregano, mint, or dill. I opt for cilantro mostly, because its crisp, sweet-tasting stems are easy to chop finely and fold into the mixture (unlike tougher stems like that of parsley). A bit of minced garlic, some finely chopped onion, and fresh peppers (sweet or spicy) can be added, too, along with red wine vinegar for a sharp bite and olive oil to smoothen the whole thing into a spreadable consistency. I added some chopped capers to this batch, just because they were on hand and sounded good to me. (Perhaps some chopped pickled peppers would be good here, too.)

The chimichurri was not too far off from the marinade for the skewers, in that they both incorporated olive oil, red wine vinegar, garlic, and herbs. For the marinade, I sprinkled in some dried oregano leaves as in keeping with South American tradition, and because dried oregano tends to impart a certain robust flavor. The oil used in the marinade helps massage the meat with some more fats for the fiery grill. With my test batch tried already, I look forward to sharing this classic pairing of steak and sauce at this Friday’s 4th festivities. Who knows, maybe things will get rowdy and there will be more biting–and not just of food–to be seen again.

Combine the ingredients for the meat; cover and chill at least 8 hours (overnight), or up to 48 hours.

Combine the ingredients for the chimichurri sauce and season with salt and pepper to taste. Use immediately or cover and chill up to 1 day.

Heat a grill over a high flame. Arrange the beef cubes on skewers and grill approximately 2 minutes to each side before flipping, or until each piece is about medium-rare. Transfer to a serving dish to let cool a couple minutes before removing the skewers. Serve with the chimichurri sauce.

Five brownie points: Yes, it’s a rich, meaty main course to serve, hopefully, alongside many colorful summer vegetables. But this main course comes with a good dose of that from the chimichurri sauce. Rather than a creamy sauce or buttery glaze, or a store-bought jar of sweetened sauce filled with preservatives, this fresh sauce is full of Vitamin C and Vitamin K from the leafy green herbs, tangy vinegar to aid digestion, and heart-healthy olive oil to bind it all. It’s a good way to go when you’re going all-out for animal protein.

Four maple leaves: Beef is far from the greatest option for low-impact foods, but when you do splurge for this luxury, a tasty, grass-fed, and more humanely-raised cut helps compromise. This can be expensive, but keep in mind that a less-desirable cut such as chuck can be more affordable and satisfying with the help of some time ahead to marinate.