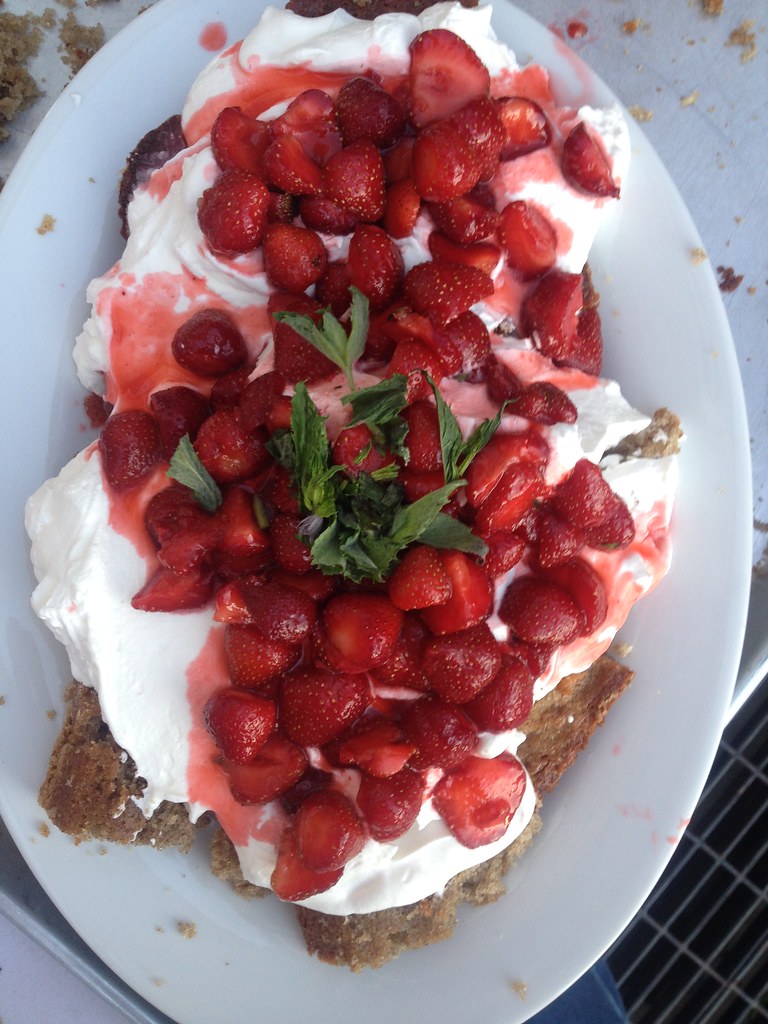 I don’t have many photos of this one, but it’s because I was covered in strawberry sludge and whipped cream while making 80 portions of it for a country wedding upstate last weekend. Phew. I think the name of this recipe tells you everything, though: it’s strawberry season, so seize the day when you can get super-sweet, local ones in the spring. And, if you’re tasked with making dessert–particularly cake, which can have such fascinating descriptors as “yellow,” “white,” “sponge” and “short”–seize the opportunity to make it a little more interesting and tasty, like the fine strawberries you’re using. Like putting buckwheat flour in the batter. It’ll still satisfy cravings for a classic dessert, and may even trump them, as I found at the wedding.

Me and Laena were tasked with not only cooking dessert for my good friends Jessica and Brian’s wedding, but also its proper meal, hors d’oeuvres, and breakfasts, lunches, and dinners for two days over the course of the wedding weekend. We were in a small, sleepy town upstate at a house that Jessica and Brian had rented for the occasion. It was magical, with peony blossoms abound and a small pond for taking a cool dip. 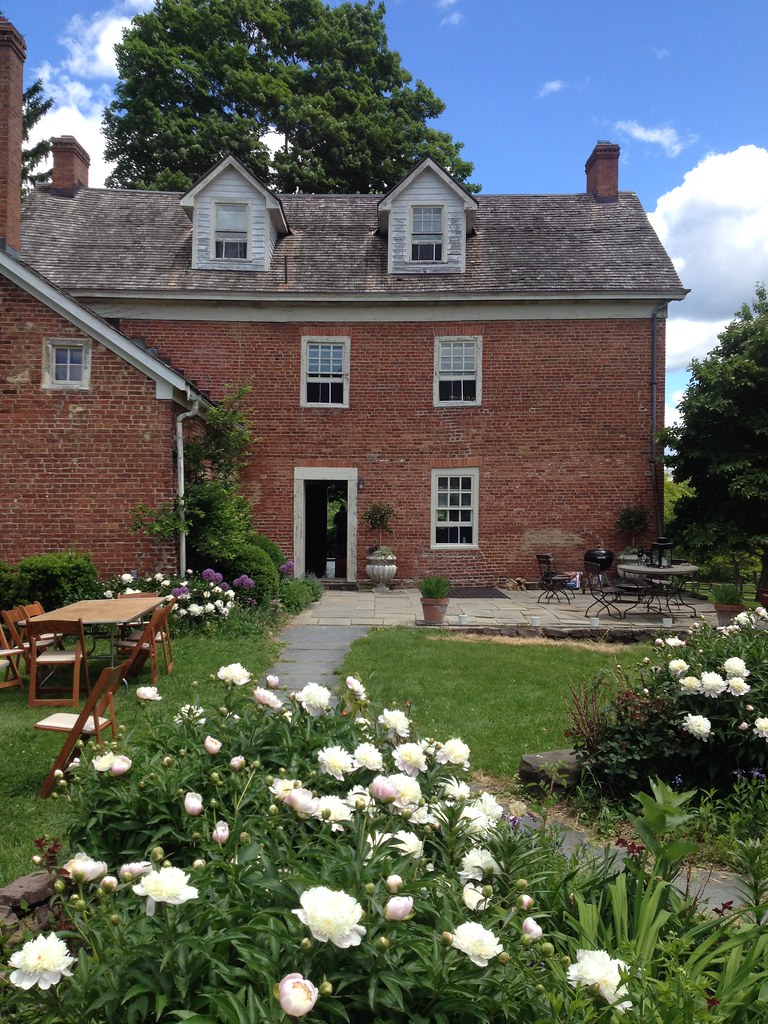 We’re not wedding caterers (or weren’t until now), and we only had a gumption that strawberries would be just in season in Upstate New York by early June, a risky calculation that we were prepared to make substitutes with if need be (principally, rhubarb). Strawberries began to flourish from New Jersey farms two weekends before the wedding date, but in Long Island just one week before it, the strawberries were still underripe-white. We called farms in the Hudson County; one was just beginning to harvest. They didn’t have pick-your-own weekends yet, but they would have enough strawberries for us.

With this vote of confidence, we decided to play around with the cake batter recipe, to make it as special and unique as the bride and groom. There was a discussion about whether buckwheat, with its darker, greyish cast, would be less appealing for some wedding attendees. There were backup plans made and meals served ahead the wedding, to gauge the audience. I fought for buckwheat; I thought at the very least it would be up the wedding couple’s alley, and that’s who mattered most. In the end, the strawberry buckwheat shortcake that we made was not only accepted by the wedding party, but piqued enthusiasm and curiosity amongst the guests. They liked it, and were intrigued as to why it tasted so good. Was it a spice cake? A guest asked afterward. Did we add nutmeg, or brown sugar? 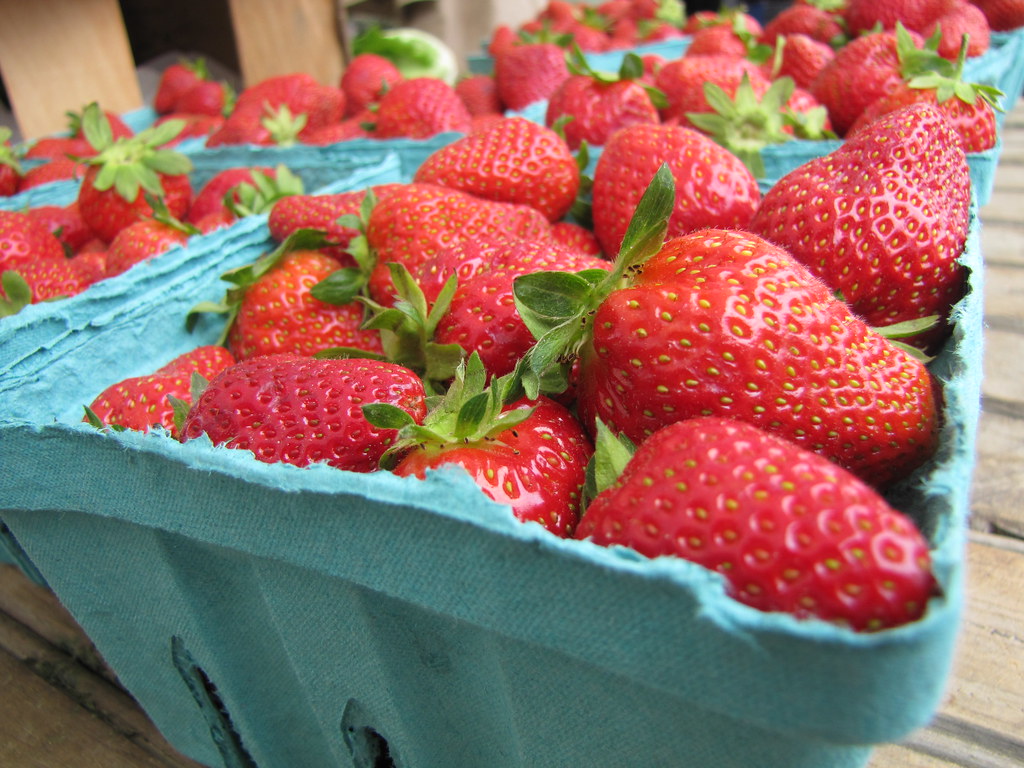 No, we did not. But the subtle flavor of buckwheat (buffered, probably, by the color of the cake) made an impression. After dessert was served, an older couple, the wife of whom had once been a caterer herself, approached us for a friendly chat and compliments on the cake. So for her and the many other guests who kindly applauded this dessert, I thought I’d share its simple recipe. We basically swapped in buckwheat flour for one quarter of the all-purpose or cake flour called for in a standard white cake recipe. You can try this, too, using your own favorite cake recipe. We didn’t do anything fancy like whipping the egg whites before folding them into the batter. And whipping heavy cream for a minimalist frosting is so easy to do, to pour over the cake and top with fresh strawberries soaked in a little sugar (Laena lobbied for doing this to create a syrup, when I’d initially argued against in favor of fresh-cut strawberries alone but couldn’t agree more with afterward). But any way you make it, strawberry shortcake is a great dessert to make for the masses: messy, simple, rustic, and fun. It’s a heck of a lot easier than trying to tame fondant into a sculpted cake topping (like our last wedding-cake conquest). And it doesn’t have to be made for a wedding at all. Here’s to celebrating strawberries, and spring.

Grease the interior of a large casserole dish thoroughly with the 1 tablespoon of butter. Sprinkle the sugar all around its bottom and interior sides. Pour the mixture into a large (about 13″ x 9″) casserole dish. Bake for 35-40 minutes, or until a toothpick inserted into the center of the cakes comes out clean.

Meanwhile, combine the halved or quartered strawberries with the sugar and set aside for at least 20 minutes. Whip the cream using an electric mixer or stand mixer.

Let the cake cool completely before assembling. Invert the cake onto a large surface and flip over. Cut into about 12 squares. Assemble onto a large serving platter. Spread the whipped cream across the top. Arrange the strawberries and all their syrup and top with the optional fresh mint leaves. Serve immediately.

Five brownie points: I know it’s a sweet, sweet, sugary dessert, but there are many pros to this one. The first of which are strawberries. This is the focal point of the dessert, strawberry shortcake’s raison d’etre, and it’s fresh, natural, and full of Vitamin C as can be. I know I vetted for not adding any sugar to the strawberries since they have such generous natural sweetness, and they don’t need the extra sweetness, just the sugar makes it syrupy, which is great for drizzling on the cake (and my shoes, as it were, as I have plenty of this stuff on them as a result). Secondly, I know a lot of people who just add canned frosting to their own homemade cakes because it’s easier, but I think we all ought to use pure, unsweetened whipped cream instead of that stuff more often these days. It doesn’t keep as well as frosting and needs to be served immediately. But if you can swing it, it’s a comparably more healthful move (I know that cream is pure milkfat, i.e. cholesterol, however). Finally, the buckwheat. What the heck is it anyway? It’s actually a seed rather than a cereal grain (like wheat), and is known to help lower cholesterol. So take that, whipped cream and cake.

Six brownie points: I’m not going to say that we used only the most local, organic, humanely produced everything from flour, sugar, salt to vanilla. But we did use the best local ingredients where we could — principally strawberries, which are the focal point of this dessert. This did require a day-of wedding schlep to a local farm but I can’t see how this dessert could have been great if we’d just gone Driscoll-crazy at Costco. No, the strawberries were its whole reason for being. Thankfully, we even had enough of them leftover for the guests to take some home, fresh.