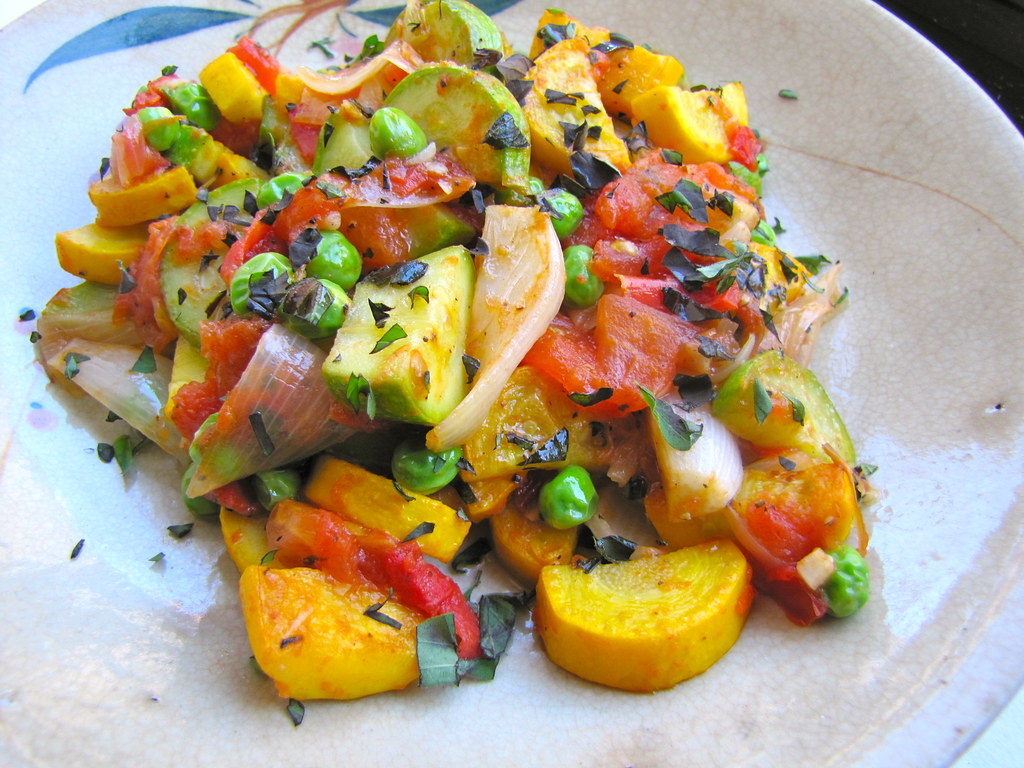 Ratatouille is a soothing meal to enjoy on warm nights or as a light lunch (or brunch, topped with a poached egg). To me, it simply spells summer; common ingredients are zucchini and summer squashes, eggplant, peppers and tomatoes. To many, it epitomizes simply country fare from France, or brings to mind a children’s film of the same name. Since it’s a flexible dish of peasant origin, you can improvise with the ingredients used, and add any favorites of your own. For a late spring version, I skipped the eggplant and peppers and added some freshly shucked English peas and sweet spring onions, quartered and lightly seared.


There are no rules to making ratatouille, I prefer to think. But you do want to cook your vegetables to a sop-worthy consistency rather than serve them raw as a salad. Blended together, they ideally become a colorful mass with unique textures and tastes to savor with every bite. 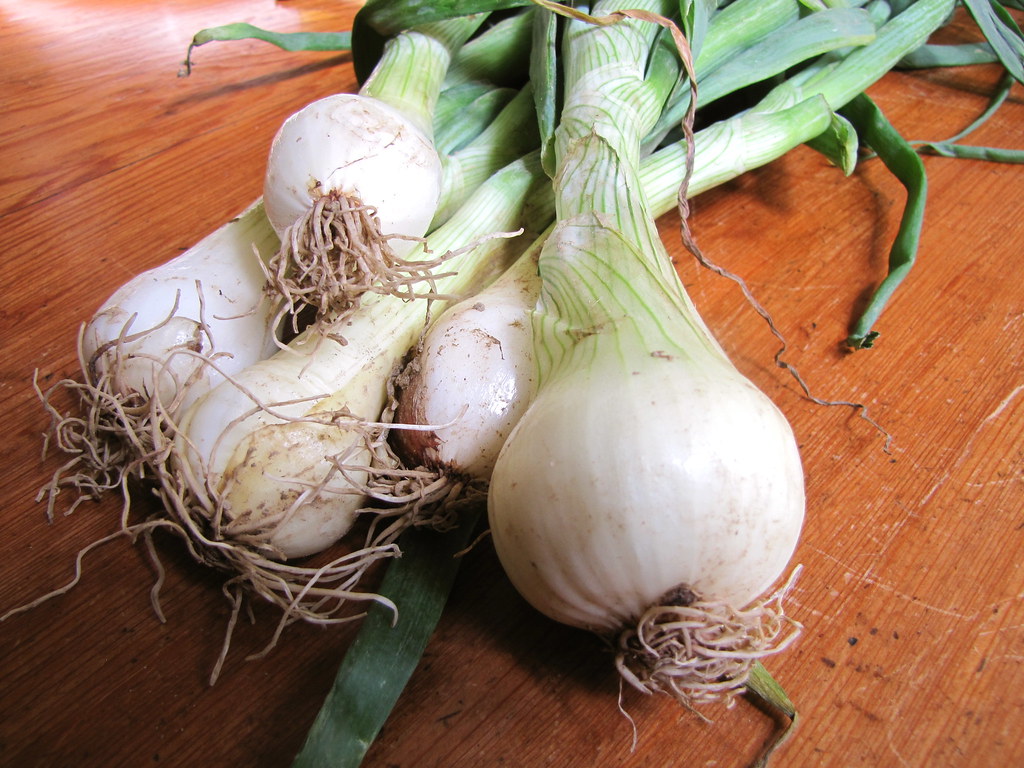 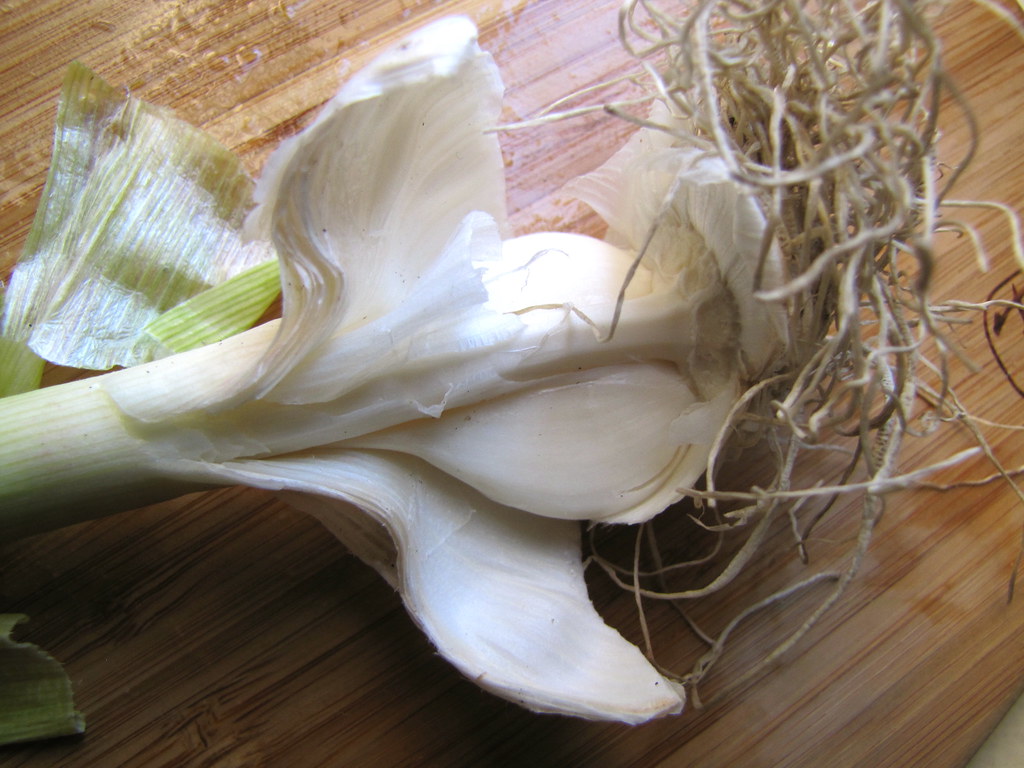 spring or “green” garlic is used, too

The pearly white spring onions I found at the Greenmarket were about the size of radishes at the bulb, and came with enormous green shoots. The less-than-delicate shoots have yet to be used up as garnish for a host of other things, but the bulbs are really special this time of year. Mild and sweet, they were delicious minimally cooked, rather than sweating until translucent as a base for this vegetable stew. 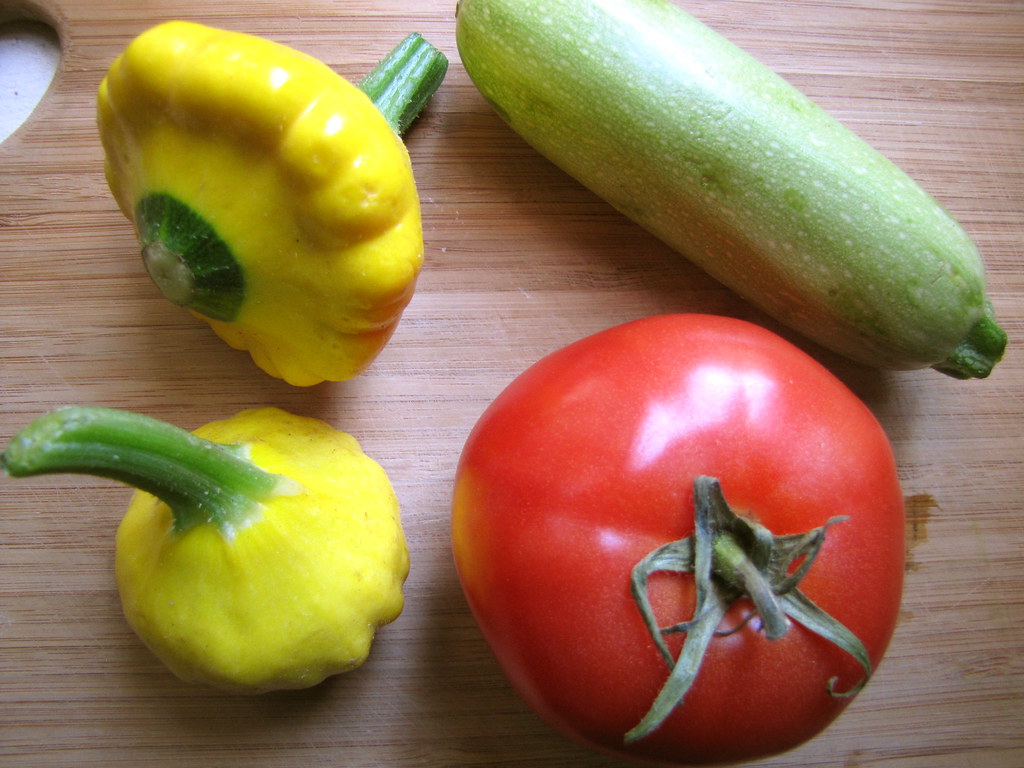 summer squashes and a hothouse tomato

Colorful heirloom squashes have been arriving in greater quantity each week from the Greenmarkets, like the yellow pattypan and pale green Italian squash varieties like Costata Romanesco and Lungo Blanco (pictured top right). These new summer fruits are firm and squeaky to the touch, a sign of flavorful flesh inside. Also available are some ripe beefsteak tomatoes from the hothouse. These are expensive previews to the real tomato harvest season, a little later on in summer, but they’re worth their weight in gold toward preparing a light, healthy sauce. I grabbed one from Stokes Farm’s stand among many other bright red ones, with nary a single dent in them. 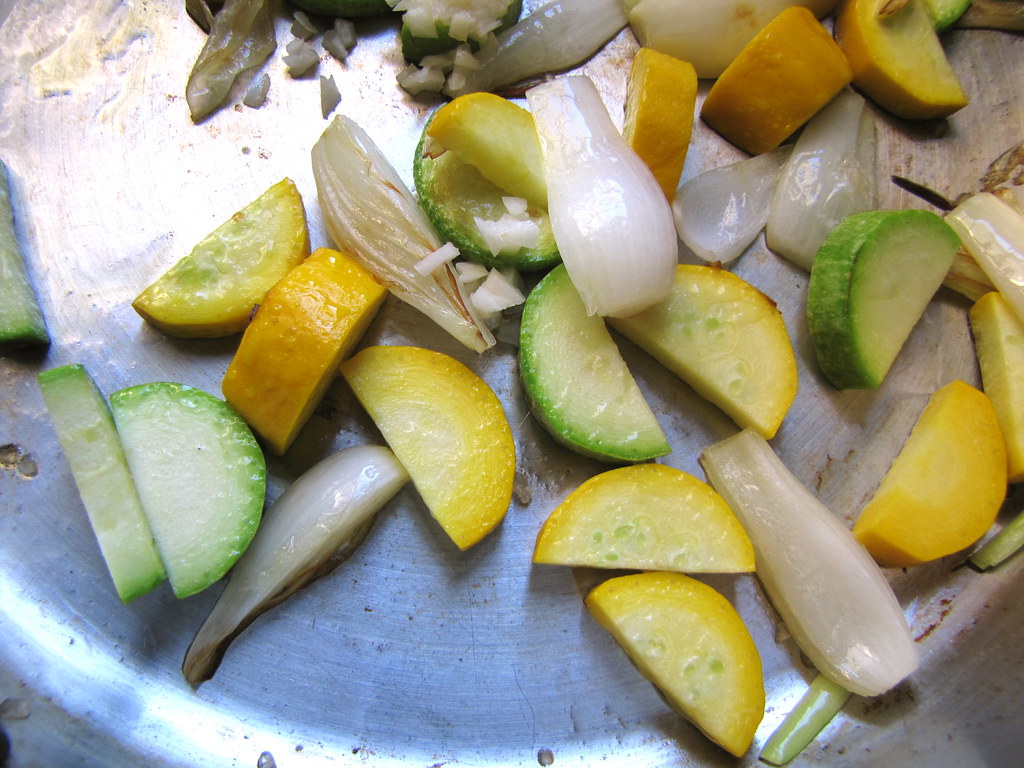 onions and squashes get a gentle sear first 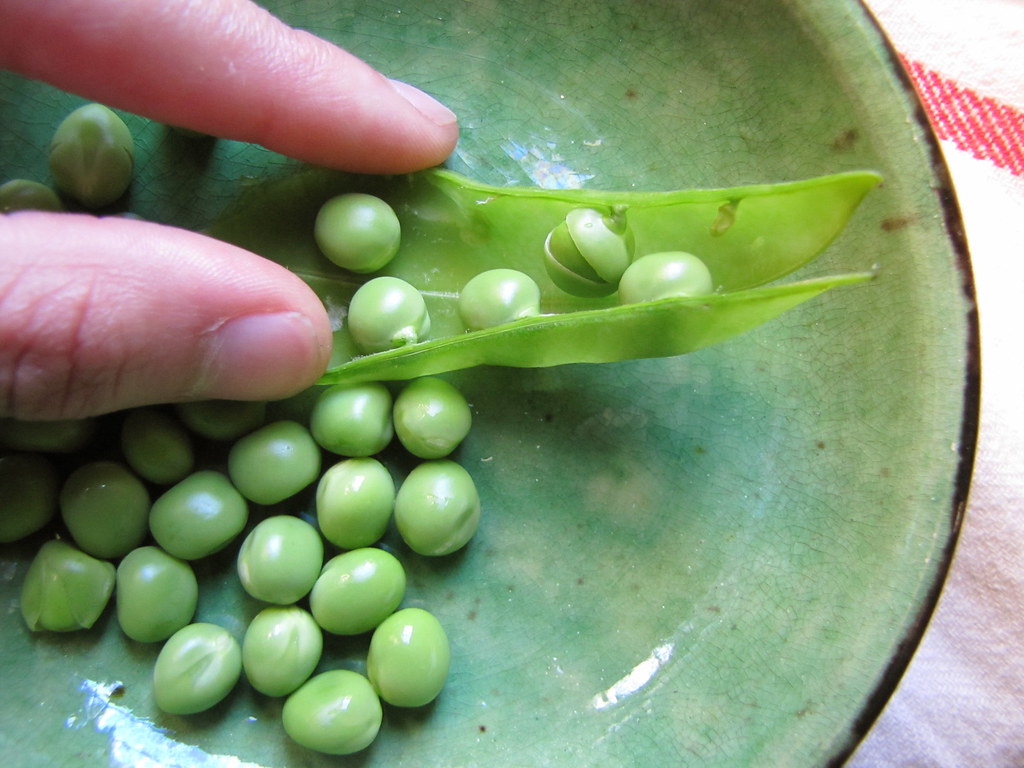 shelling English peas from the pod

Because I don’t like overcooked zucchini and summer squash, I slightly browned these pieces in hot olive oil first. I kept the chunks rather big, to maintain their shape and bite. These were set aside while I went for the same slight browning on the onions, which were cut into small wedges. Next, the tomato was chopped and added along with a clove of minced garlic. Once they had oozed their juices, the squashes were popped back into the pan along with the peas to gently cook in the juices. 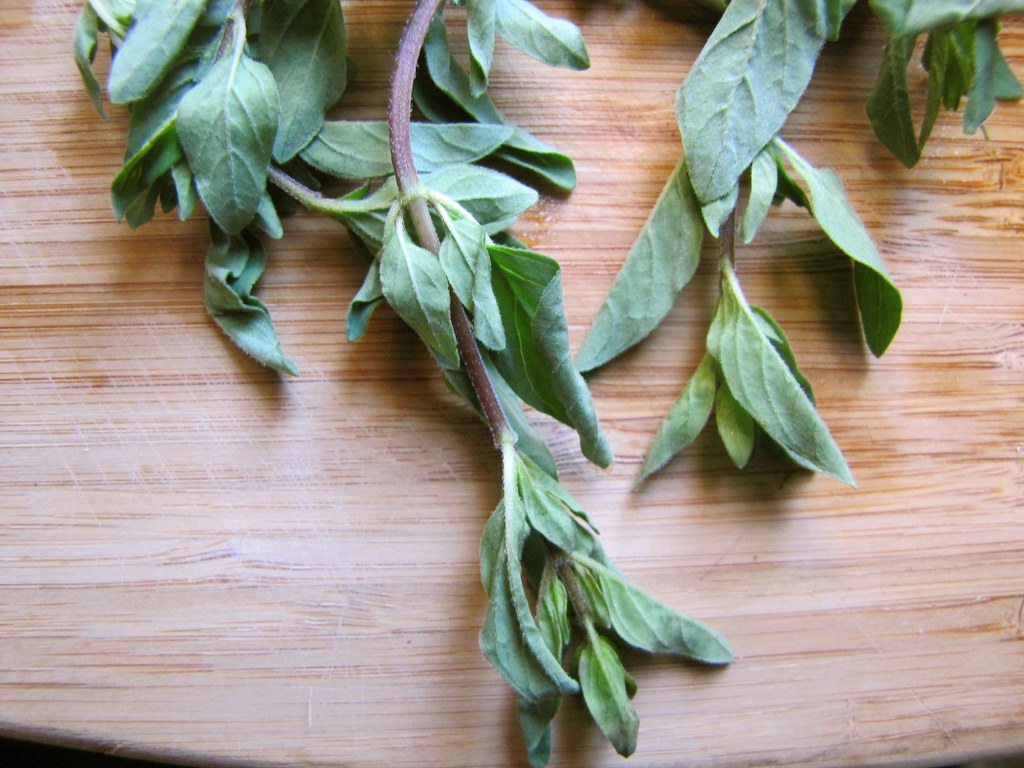 More olive oil and basil can be added to finish the dish, but since I had some handy from a friend’s nearby garden, I chopped up some fresh Greek oregano for garnish. 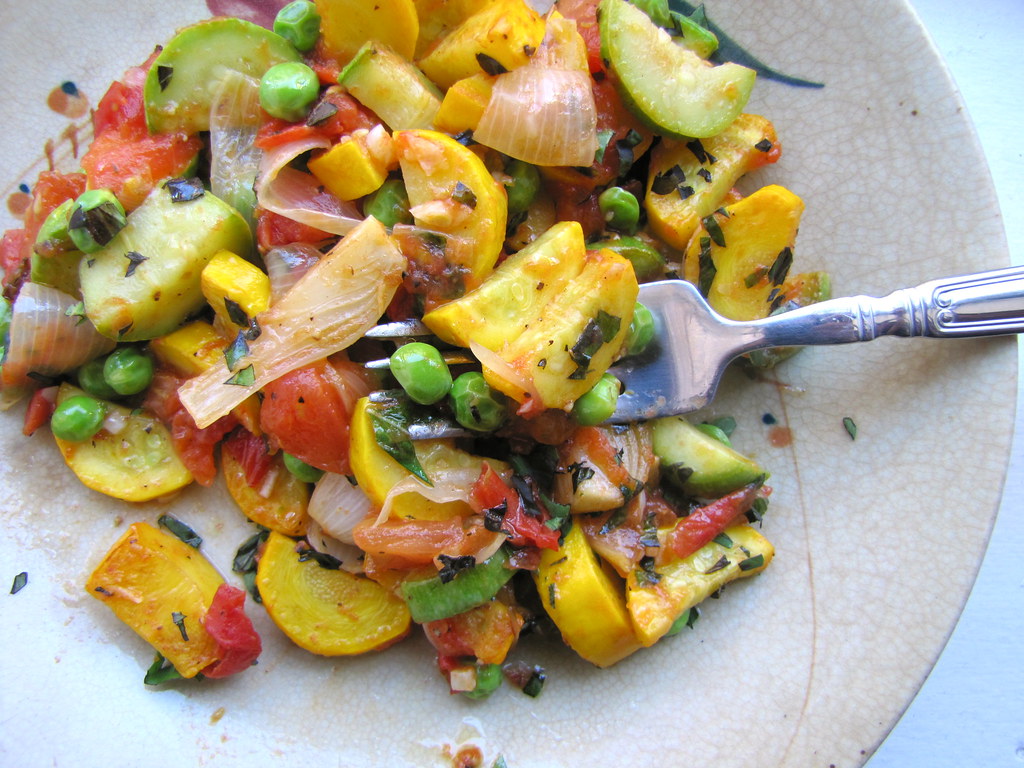 It sounds so simple — and it is — but this dish is terribly delicious in the end if you’re using really great ingredients in combination. Rather than compete with one another, they enhance one another, and you just can’t get enough of it all. An ode to late spring, and a prelude to summer, this dish. Hope you get to make it while there’s still tastes of each season to find.

Heat a tablespoon of the olive oil on a wide, heavy-bottomed skillet or sautee pan. Once very hot, add the summer squash pieces and season with salt and pepper. Cook, stirring occasionally, about 2 minutes, or until just browned in some areas. Remove from pan. Add another tablespoon of olive oil and scatter the onion. Season with a pinch of salt and pepper. Once slightly browned in parts and milky-white or translucent, remove from pan.

Add another tablespoon of olive oil and add the minced garlic. Once fragrant, after a few seconds, add the tomatoes and a pinch of salt and pepper. Cook, stirring occasionally, 2-3 minutes or until juices have slightly cooked down. Add the peas and cook another 1-2 minutes. Return the squashes and onions to the pan and cook until warmed through and slightly more softened. Taste for seasoning. Serve with a drizzle of olive oil and the fresh herbs with crusty bread.

Three brownie points: This ultra-nutritious meal is best served with a starch, and country white bread seems a good fit. But to make your dish even more healthy, try it with a cooked whole grain, such as bulgur or brown rice. With that taken care of, this is a well-rounded meal with lots of phytonutrients from the delicious squashes and some protein from the peas. It’s also all plant-based, with only heart-healthy olive oils as added fats. A vegan meal to inspire disbelievers.

Eight maple leaves: Just vegetables, and some imported olive oil and seasonings. From the onions to the garlic, all of the vegetables here are in season from local farms, and at their prime, no less. It’s easy to eat locally with such colorful produce to choose from.