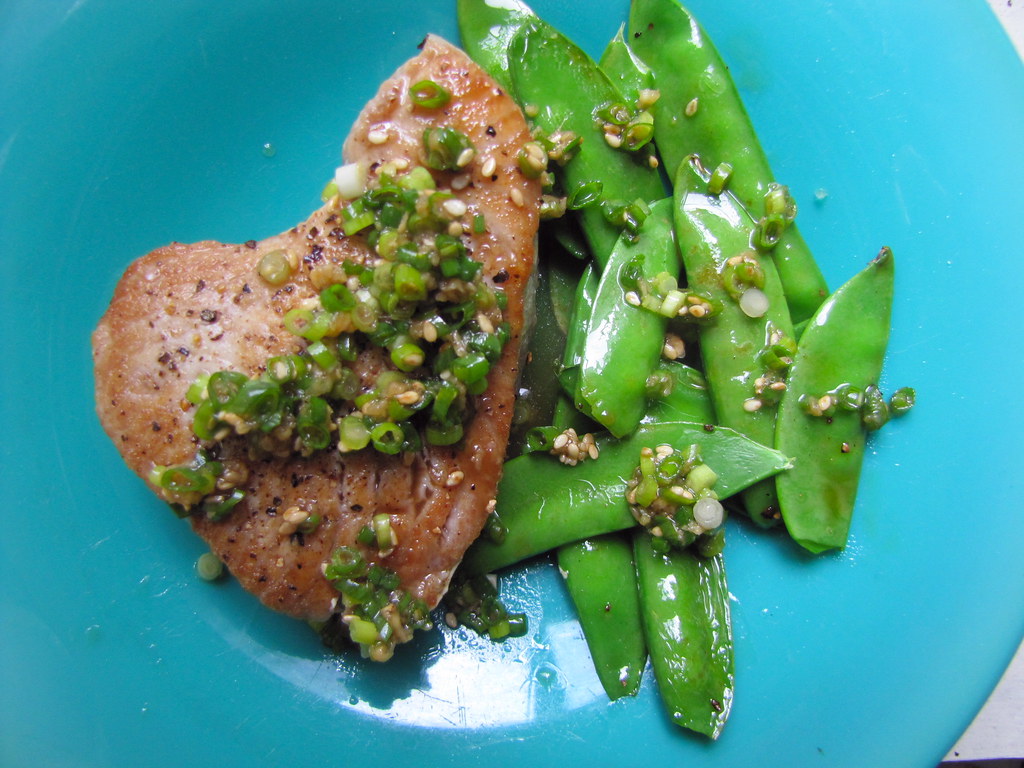 Oh indulgence, you sinful pride. I eat tuna fairly often, from a can, on bread or an olive oil-drizzled salad. The pale, meaty hunks of fish are pretty satisfying this way. But nothing compares to a thick slab of fresh-caught tuna, seared ’til just golden and ruby rare inside. It’s the perfect indulgence to pair with spring snow peas, also from local origin, and a zesty, tart, umami sauce with fresh, young scallions, too.

I was wandering through the Greenmarket, without ideas, and caught sight of the tuna steaks on the sign at PE & DD Seafood, of Long Island. I’ve seldom thought to buy myself a fresh steak of tuna, for various reasons. Big, carnivorous fish such as tuna and salmon  — as well as big, meaty animals like cows — aren’t my everyday meal. Or so I thought. Then I remembered my canned tuna lunches from time to time. Less-processed, more local, and more guaranteed sustainably harvested fish such as those caught by the friendly fishmongers at the Greenmarket is invariably a better option than canned, I decided. It’s also a lot more expensive. But hey, it’s a price well worth paying once in a while. 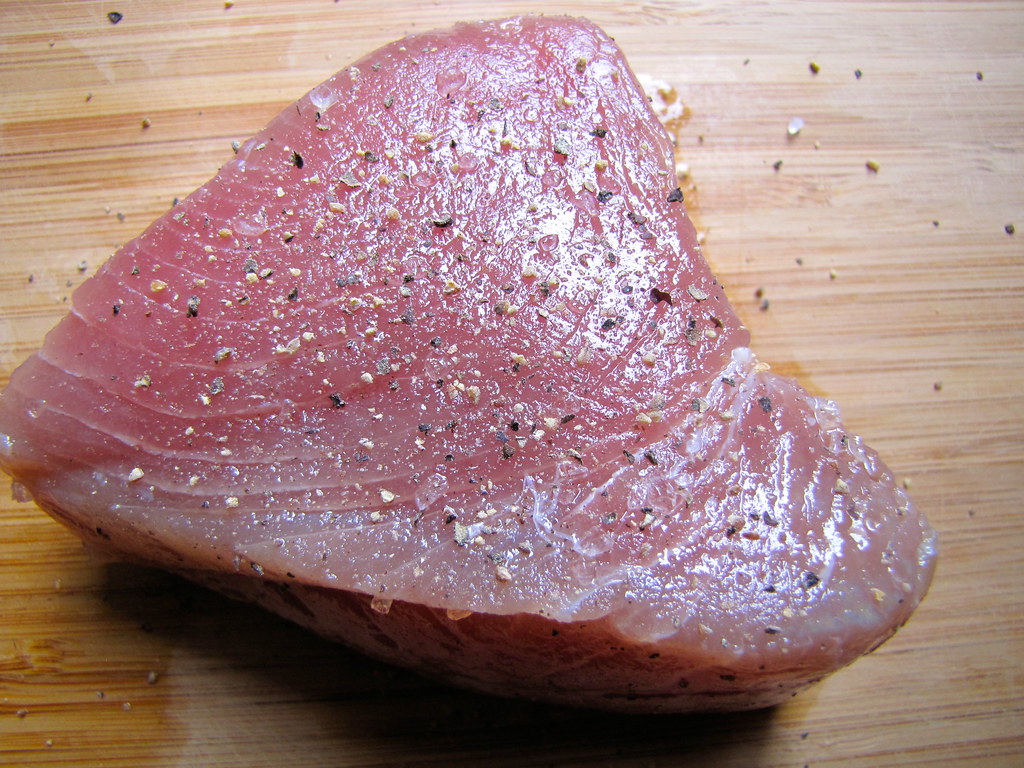 Tuna steaks make for one easy, and really exciting meal. If you can sear a steak or chop, you can throw a slab of tuna on a hot griddle just to singe the surfaces. Tuna won’t be as loaded with juices like land meats are, so a simple sauce is helpful to let your pieces absorb. It’s also more fresh and clean-tasting than meat, so you want to go lighter with the sauce, using herbs and something tart. 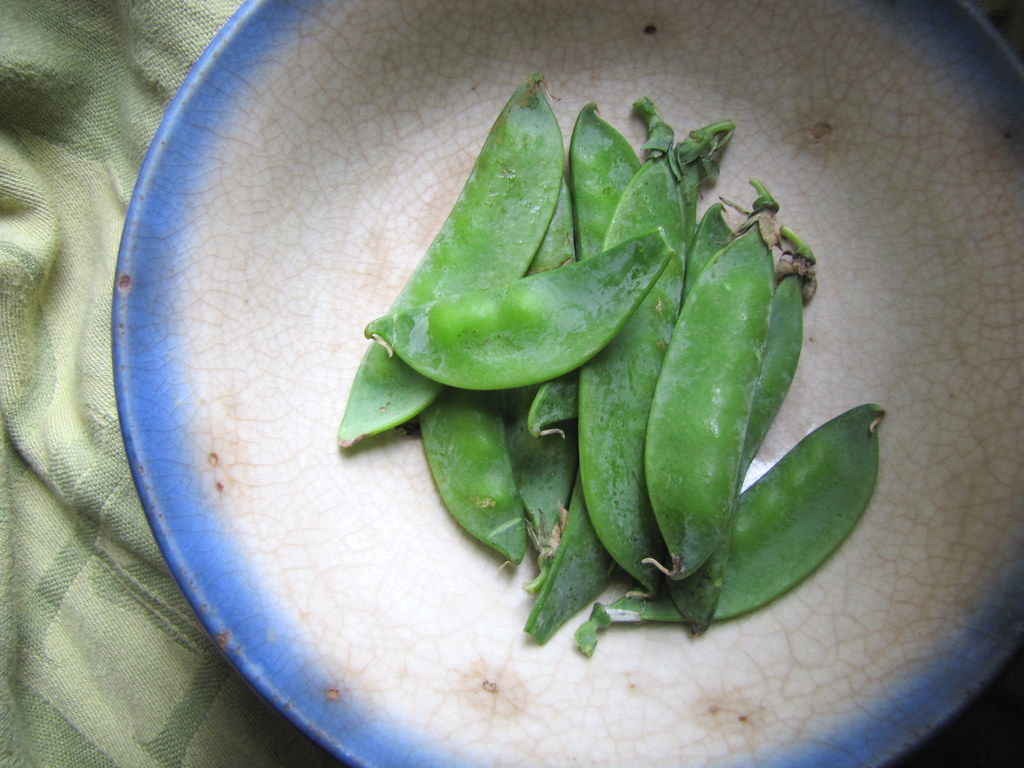 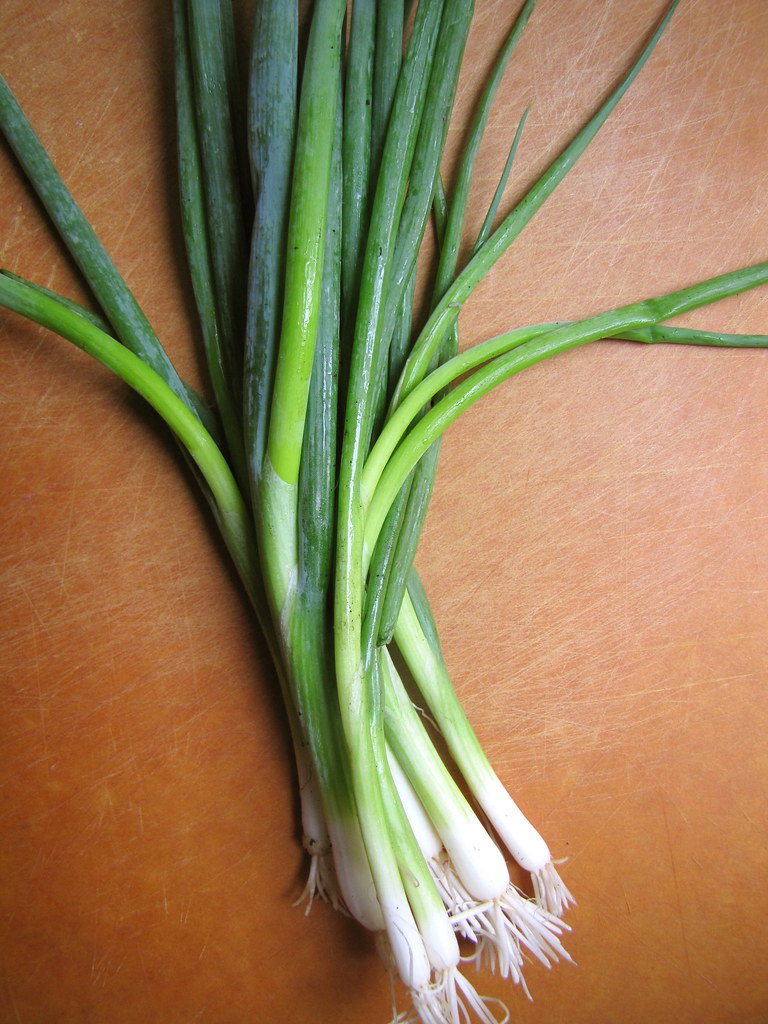 Now, fresh with inspiration, I zigzagged to Maxwell’s Farm stand at Union Square to grab a few handfuls of crisp snow peas. The peas were visibly bulbous locked inside their thin, sweet pods. They need all of a few seconds of heat to brighten in color and go “pop” in your mouth.

Thinking explosions of taste going off, I picked up a bunch of beautiful scallions before ducking into the subway. I wasn’t sure what I was going to do with it all, but had an idea that sesame oil and soy sauce were going to come into play. 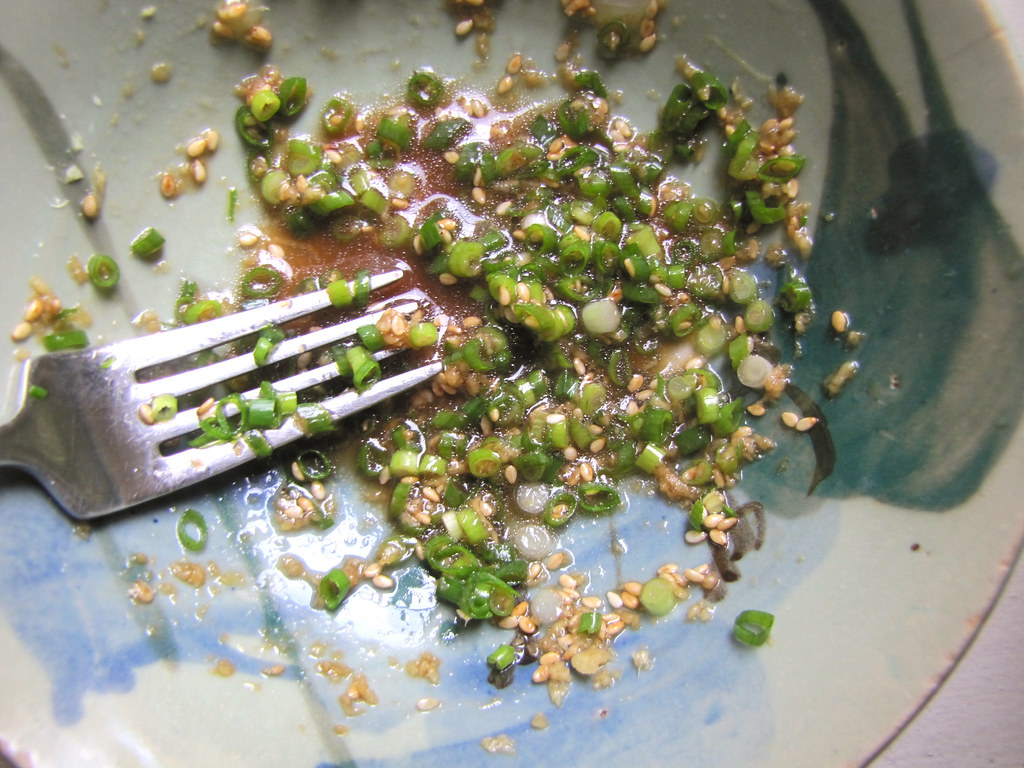 mixing up a savory and refreshing ginger-scallion sauce

Ginger-scallion sauce: a refreshing Chinese condiment with minced fresh ginger, copious scallions, and sesame oil. This pleasing mixture can be spread on roast meats or used as a simple dressing for noodles (such as the vegetarian ramen at Momofuku Noodle Bar). Here, to give my fish entree some tang and saltiness, I kissed it with rice vinegar and soy sauce. And for more texture, in addition to all those chopped scallion pieces, sprinkled it with toasted sesame seeds. 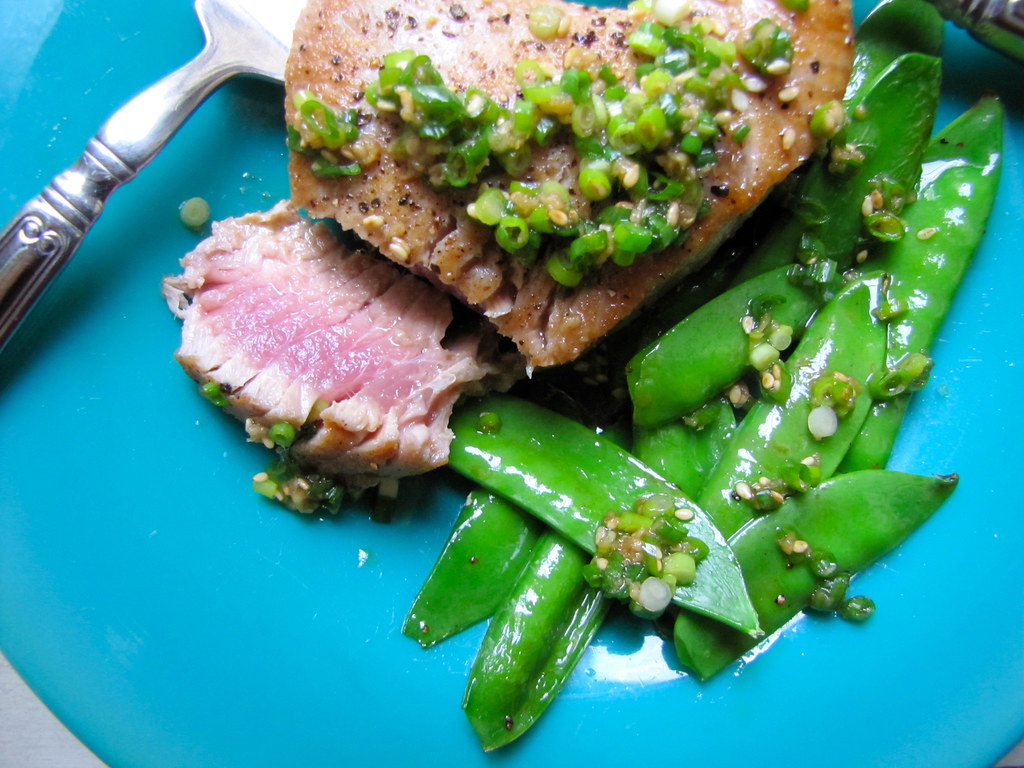 If you’re looking for a sauce to coat your chilled noodles with, this is a great fix. But drizzled on a seared tuna steak, and flash-sauteed snow peas, it was heavenly. I think I’ve gained a new appreciation for canned tuna after this meal, strangely enough.

Combine all ingredients for the sauce in a small bowl and stir briskly. Taste for seasoning, adding a dash of anything more if desired.

Pat tuna steaks dry with paper towels and sprinkle both sides with salt and pepper. Heat up a heavy cast-iron pan or griddle. Add the oil and once very hot, place down steaks and don’t touch for about a minute. Once golden on the bottoms, flip over to sear the opposite side and turn off heat. Let the steak continue to cook with the residual heat until cooked to desired doneness (gently touch the steak and feel for its firmness inside). If you prefer your steak more well-cooked, you may place a lid or bowl over the steak to cook it through further, or turn the heat back on to low. Scatter the snow peas on the same pan while it’s cooling down to just bring out their color, and cook until crisp-tender (taste for desired doneness).

Plate each steak with a scattering of the snow peas. Drizzle the sauce on top, and serve immediately.

Six brownie points: There’s pluses and minuses here; on the one hand, this is a very lean meal with unique benefits, such as the omega-3 fatty acids found in the fish and its protein, as well as the plant-based protein in the snow peas. Fresh ginger and scallions are known to revive your energy on a sleepy day, and with all the fresh ginger here, it’s good for your circulation. On the other hand, there’s mercury levels to watch out with for any large, carnivorous fish such as tuna, which consumes so many smaller fish in its lifetime to accumulate a much higher level than them.

Five maple leaves: It’s the start of the season for skipjack and yellowfin tuna in local fisheries in Long Island. These smaller varieties are tagged either “Good Choice” or “Best Alternative” on Seafood Watch so long as they’re caught by pole, longline or troll (not to be confused with bottom “trawl,” which is a very damaging method). It can be so difficult to know where your seafood is coming from unless you go straight to the source, at the fishmonger’s stand at the Greenmarket. Likewise, it’s important to support these independent, small fishmongers, who catch their fish the old-fashioned way and with minimal damage to the environment. Yet these are still wild-harvested animals and stocks need to be watched so that they can maintain their populations. Several organizations, such as the Monterey Bay Aquarium, do just that and publish their findings for consumers to decide for themselves.