Why have I not been making gnocchi every day? It’s luscious, filling, delicious and much easier than rolling out pasta at home. A classic potato gnocchi is simply flour and boiled potato, but it takes a certain tool (ricer) and timing to make a fluffy mound of warm, moist potato to absorb the flour. While you can do this any time of the year, fresh fava beans in the pod are only in season locally right about now. These lovely beans paired with the crisped, little pillows of gnocchi just right for a simple springtime dinner.


I just wish favas weren’t so tedious to husk. After removing the beans from the pod, the outer skin of the bean must also be shelled, to reveal a smooth, bright green-colored bean that separates easily into two halves (especially when cooking). True, you don’t have to shell this skin from the bean, and the pods can be made tasty enough to eat if you grill it (as I’ve suggested recently in this post). But the innermost peas from that one big bean are really the crown jewels of the plant, so why not treat yourself to anything less than the best on a busy, weeknight one-person meal? 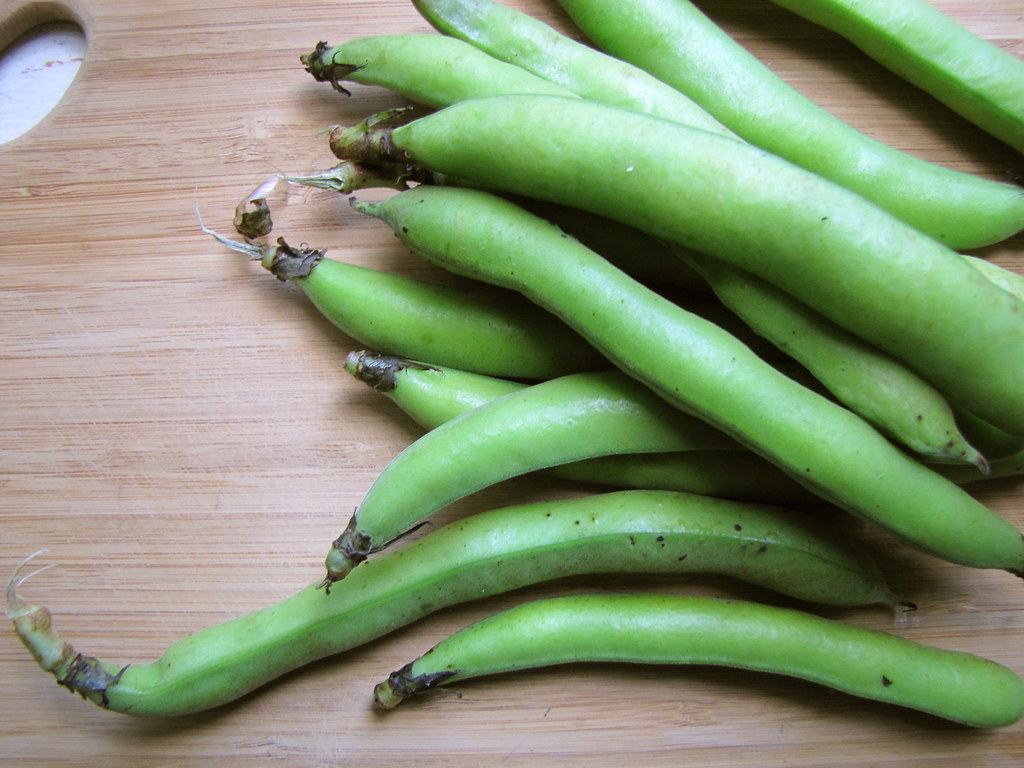 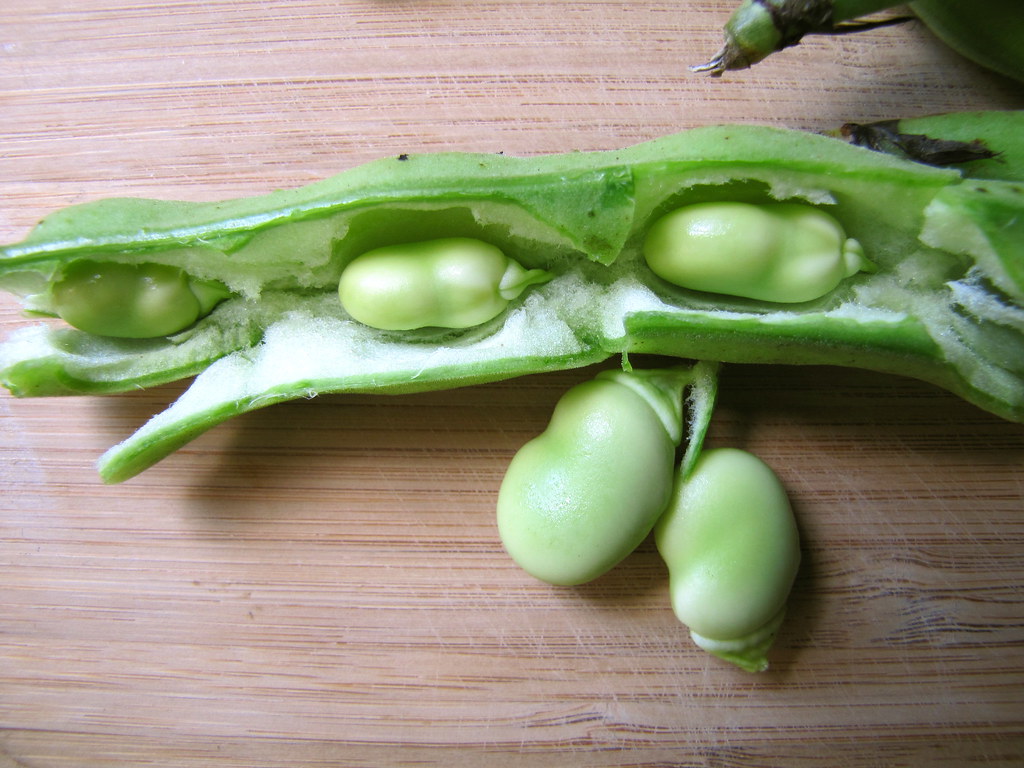 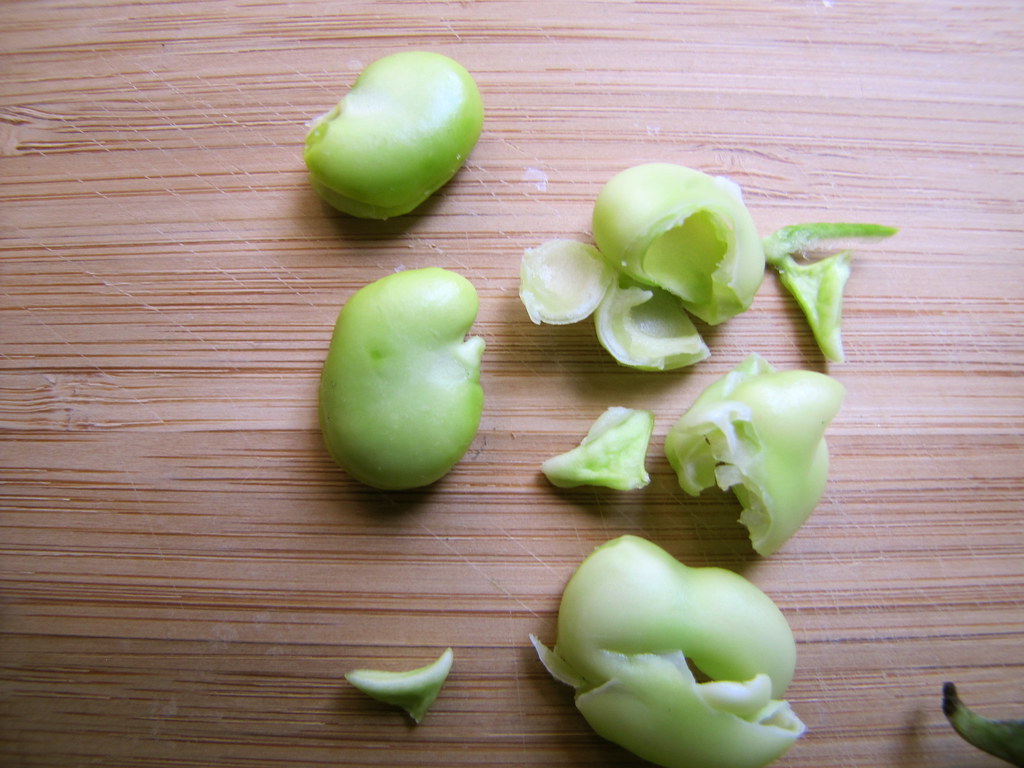 I love how the pods are so foamy and cushioned, to protect the delicate beans inside them. It’s funny that the word “pod” has been adopted by so many electronic entities in our society, from Apple to spaceships, but this is really the essence of the word: a bean in its soft, cozy home. It’s almost guilt-inspiring to take it apart.

So I don’t actually have a potato ricer. But I can still “rice” potatoes in pretty much the same fashion by boiling the peeled potatoes to death and then squashing them through a uniform-holed colander with a spatula for a couple minutes. This works fine for me, and the potatoes go through a lot quicker than you might think. (I once borrowed/was given a half-broken potato ricer by my friend Dave and gave it away to the next victim the following day, it was so useless.) And I actually used red potatoes for this gnocchi, which is not the preferred type over more starchy potatoes, like Idaho. But once peeled, quartered, and boiled until falling apart a little, they went through that colander like warm butter. And you need to immediately add flour to that stuff while it’s warm in order to make gnocchi next. 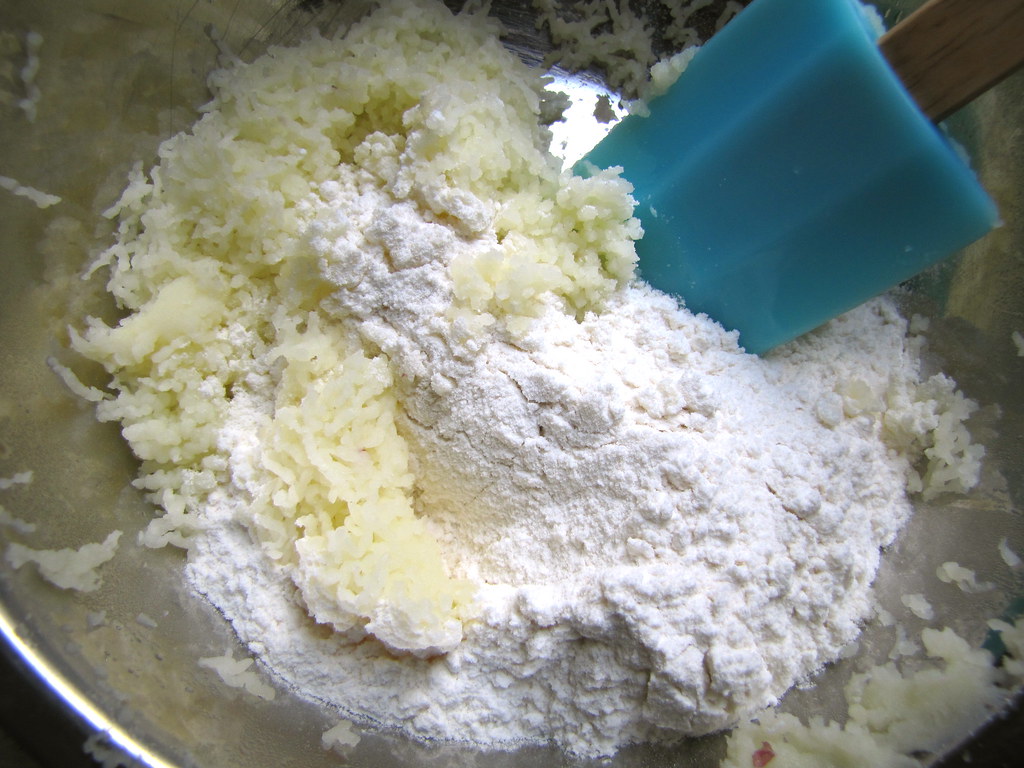 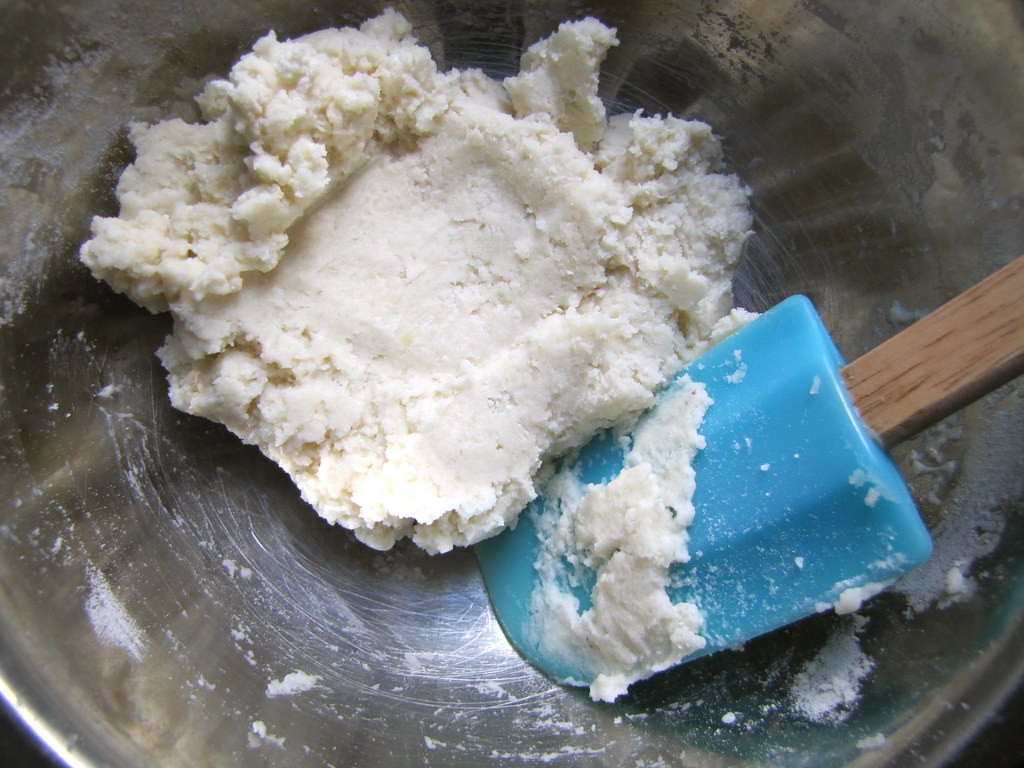 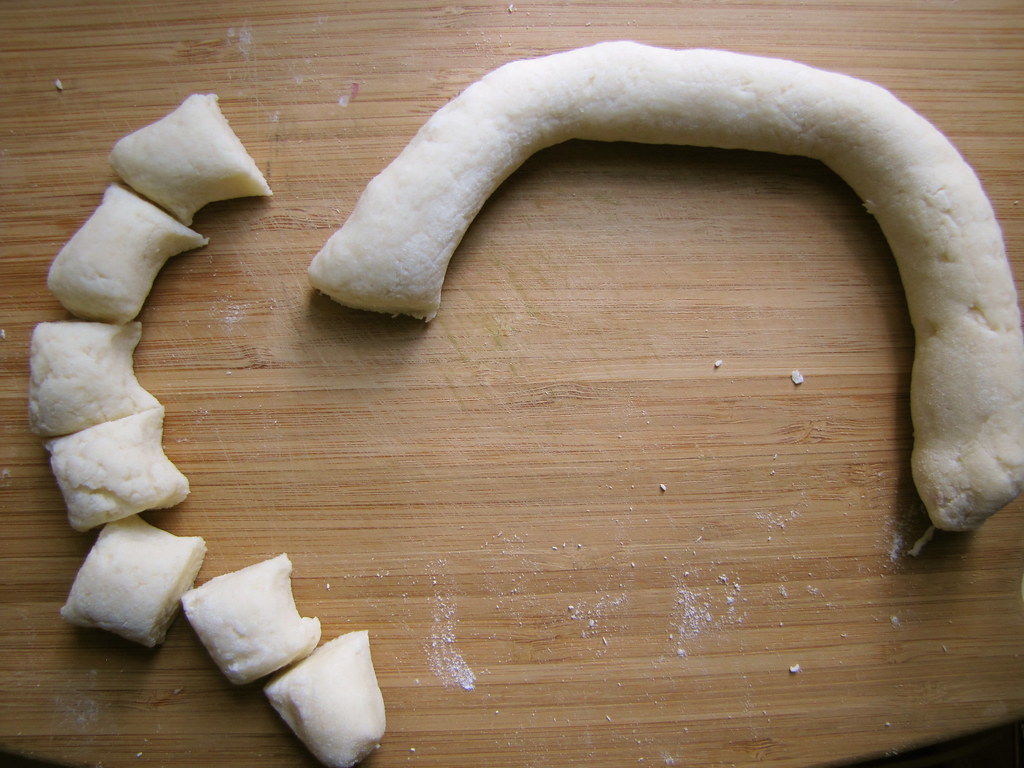 a warm, riced potato is folded with flour and rolled out to a tube to chop up

Don’t overwork the riced potato-flour mixture with your spatula. Just a couple folds in a mixing bowl, and you can add a touch more flour if it’s too wet, or a splash of that starchy, potato cooking water if it’s too dry, until it just barely comes together. I created two baseball-sized balls of it with my hands, which was more than enough for one person. Next, the balls need to be rolled out on a floured surface much like you would roll out snakes of play-dough as a kid. (Stretching the mixture is just going to break the logs.) Chop the snake up into little squares, and if you’re not using them immediately, place the whole cutting board of them in the freezer until you’re ready, with a pot of boiling water to receive them. (Otherwise, they might stick to the board.) 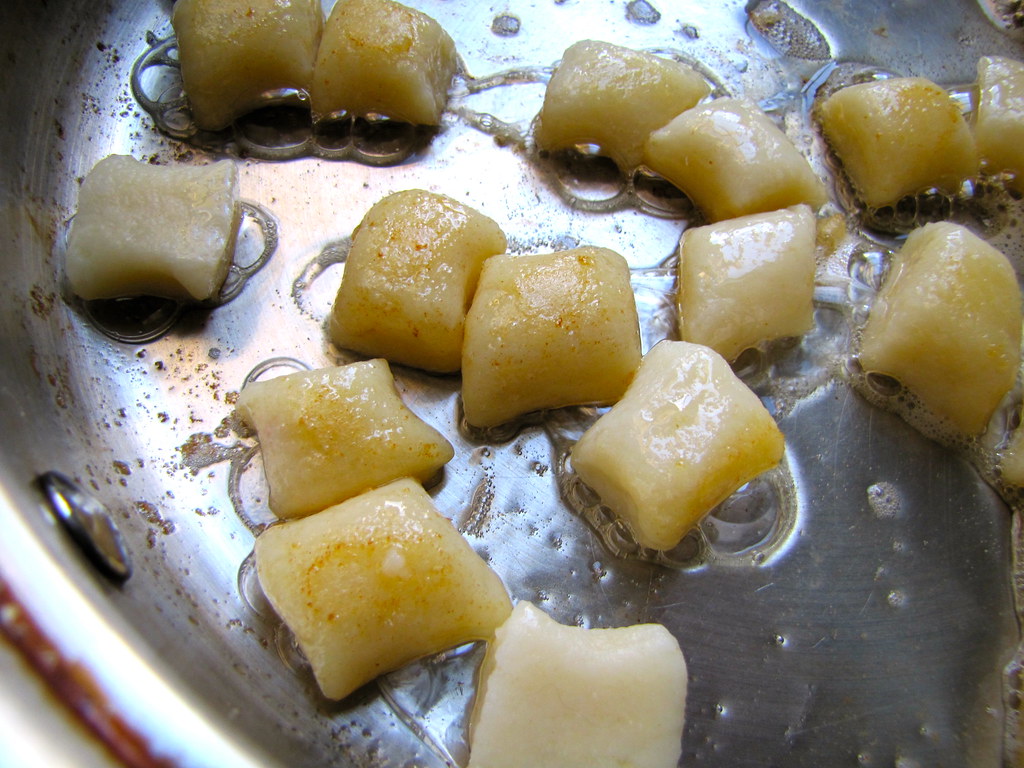 the gnocchi crisp in butter after being boiled

You don’t need to crisp the sides of the gnocchi in a hot, buttery pan until they’re golden — but again, this dinner is for you, right? And you deserve the most texture and flavor possible. So after a quick boil in salted water, the fresh gnocchi can be drained and then added to a hot pan of butter to serve you that extra treat. I waited until the butter had melted and began to froth slightly, to ensure that it will burn just a tad bit with that gnocchi added, and create a thin, “brown butter” effect. Once the gnocchi were flipped, I slipped in some chopped garlic scapes, which are the milder-tasting shoots from the garlic plant, and bright green for some color. Don’t let these burn, though; merely finish the dish by cooking the gnocchi on the opposite sides until a little crisp, and removing it from the heat. The shelled fava beans can be boiled in the same pot that previously held the gnocchi for a couple minutes, and transferred to the pan of gnocchi for the final toss. 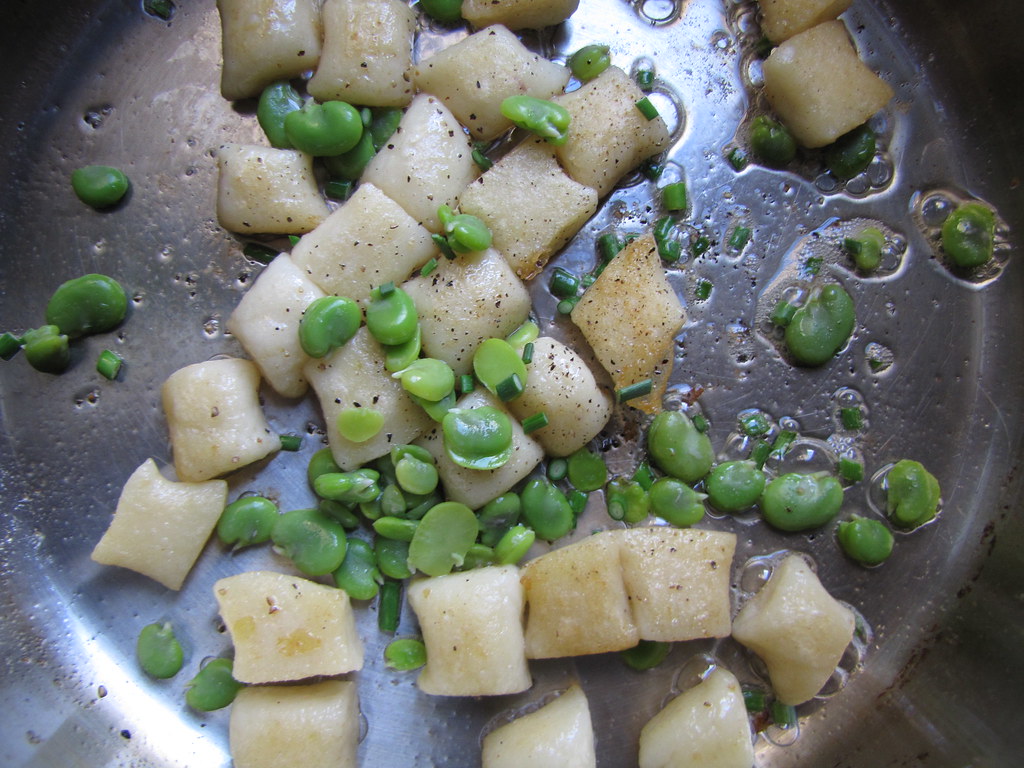 chopped garlic scapes and fava beans are tossed in

I’ve added some chiffonades of fresh basil to finish it, and a drizzle of good, extra-virgin olive oil. You can also grate some aged cheese on top, or stir in some ricotta if you like. This minimal preparation, with the earthy flavors of potato and fava beans accented with butter and basil, sealed the deal for me on this weeknight. Hope you try it soon.

Bring a pot of salted water to a boil. Add the potato wedges and cook until tender, about 10-15 minutes, until flaking apart slightly. Transfer with a slotted spoon to a potato ricer (or colander with even-sized holes). Press potatoes through the ricer or else pass through the colander with a spatula. Dust in the flour immediately and fold together gently with a spatula until mixture just comes together (adding another dust of flour if too wet or a splash of the starchy potato cooking water if too dry). Form into two balls.

Bring another pot of salted water to a boil. Meanwhile, dust a cutting board or surface with a flour and roll out one ball of dough at a time with your hands, until a 1/2″ wide tube. Cut tube into 1/2″ squares and keep separate. If not using immediately, transfer the cutting board to the freezer while you await the boiling water.

Heat the butter in a heavy-bottomed skillet or chef’s pan until just bubbly. Add the gnocchi, and don’t stir until slightly golden on the bottoms. Flip to brown the opposite sides. Add the garlic scapes, and once brown on the opposite sides, about 2 minutes, stir in the fava beans. Season with salt and pepper to taste. Serve with a drizzle of the extra-virgin olive oil and the basil chiffonades.

Four brownie points: It isn’t crossing the line into artery-clogging terrain, but it’s a simple yet slightly rich dinner with a good pat of butter for serving. The carbs in this dish, which include refined white flour and potatoes, aren’t the most nutrient-dense as whole grains or just plain potatoes, and will take cardio exercise to work off. But the potatoes also add potassium, fiber and Vitamin C to your diet. The fava beans will provide heart-healthy legume protein, more fiber and folate as well. I know it may seem as if I’m beating down on what looks to be a relatively light, healthy dish (which it is, in restaurant-going terms), but there’s a few red alerts to keep in mind, such as the butter and carb content, that can easily go astray here if you eat too much of it. At least it’s a very filling dish.

Seven maple leaves: Fava beans are a great indulgence in spring, and these and most legumes are known to replenish the soil rather than strip it of nutrients. So go crazy with them while you can; as for the rest of the ingredients, simply investing in a couple fresh herb pots for the summer can repay you with a wealth of fresh flavor to garnish any dish with, so take advantage of it by buying some seedlings of basil or whatever at the farmers market soon. Potatoes, flour and butter can be easily purchased locally and organically any time of the year, so they’re great for keeping on hand for impulse gnocchi nights like this.