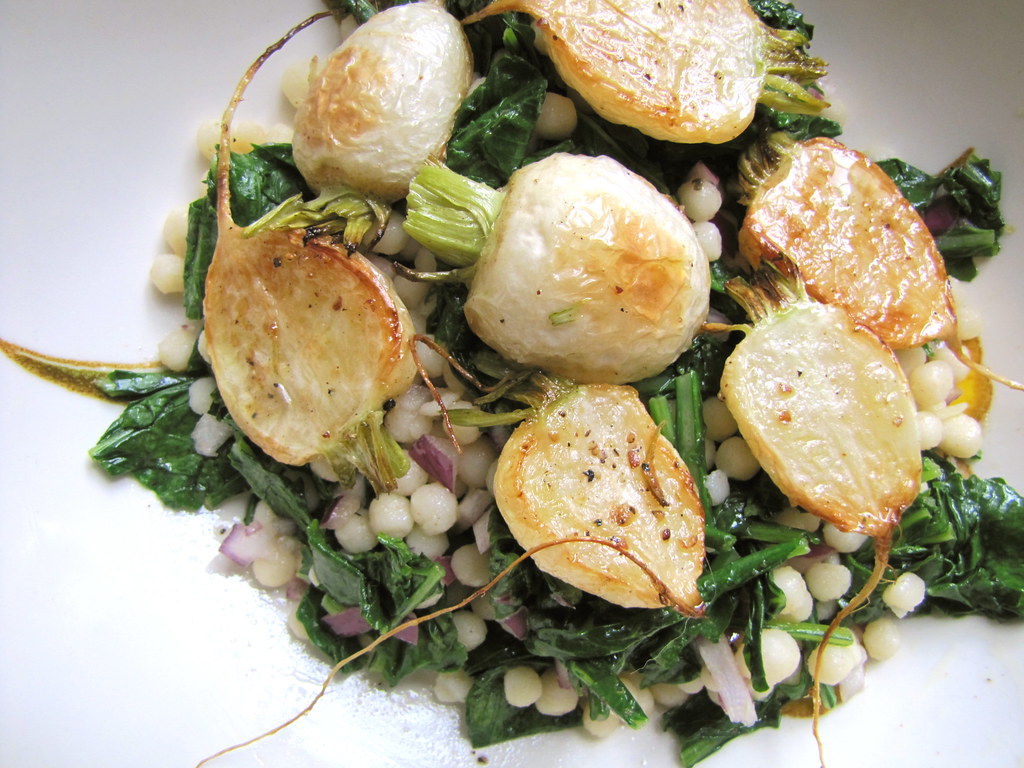 Apparently I’ve been mispronouncing hakurei turnips as “haruki” turnips for a long time. This was finally corrected by Keha McIlwaine, who was selling the most beautiful specimens of them I’ve seen at Queens County Farm Museum‘s stand at the Greenmarket last Friday. While shopping there, I witnessed a couple trying to decide whether to buy the turnips, and what to do with them. Keha suggested they could be sliced up and sauteed, along with their healthy, bright greens. But they wanted to know what the roots tasted like. I told them they were sort of like juicy, mild-tasting radishes, without the spiciness, and they’re really good for you. The latter part wasn’t exactly a tasting note, but it made them laugh enough to try out a bunch.


And it sold me alone, apart from their glistening, egg-like complexion and juicy ripeness of current state. These turnips are so mild, crisp and watery — especially in the spring — that they’re hardly worthy of the dense and bitter root vegetable’s name. They don’t have the sting of sharpness that radishes do, either, and they’re much sweeter than you would expect. So they’re great crunching into raw, but also they roast to crisp, caramelized surfaces, with juicy centers when served hot or cold. Also, their tails brown to a chip-like texture if you leave them on. 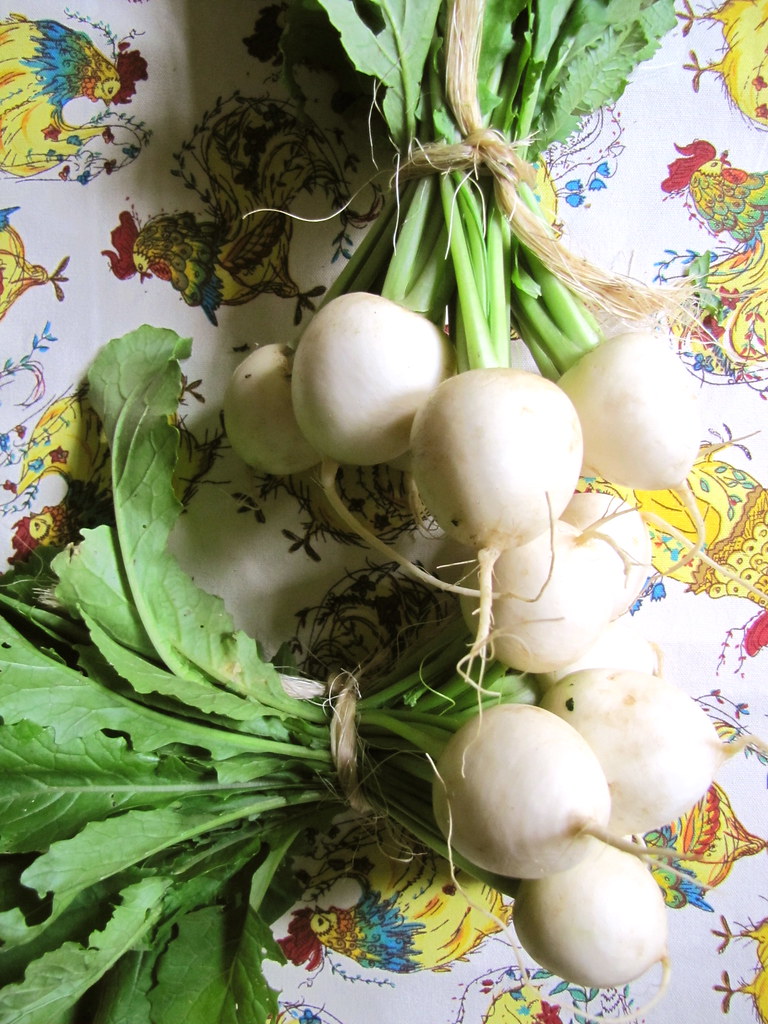 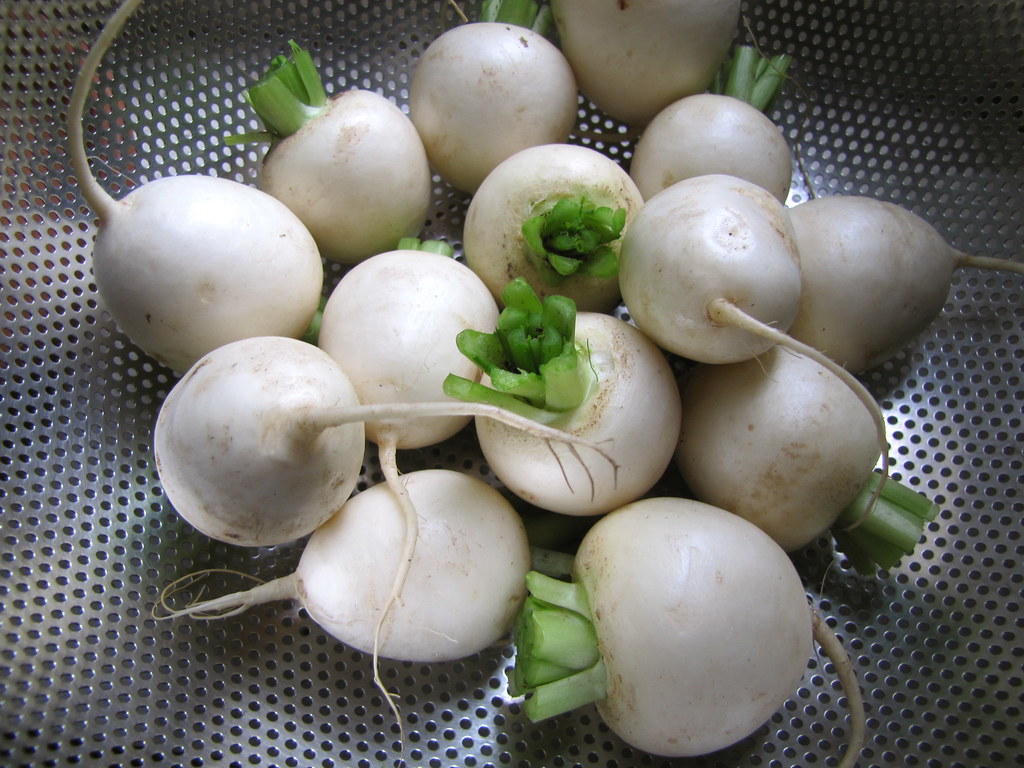 It’s simple to do. And for one bunch’s worth of fresh radishes, you’ll also have a pile of greens to play around with. I cooked these turnip greens, which were remarkably smooth and unblemished, in a quick sautee with garlic. The stems were included in this, too, and I left tiny stubs of the stems on each half-sliced root to roast along with them. You might as well; there’s really nothing to waste with these hardy crops, when the greens are as healthy as this. 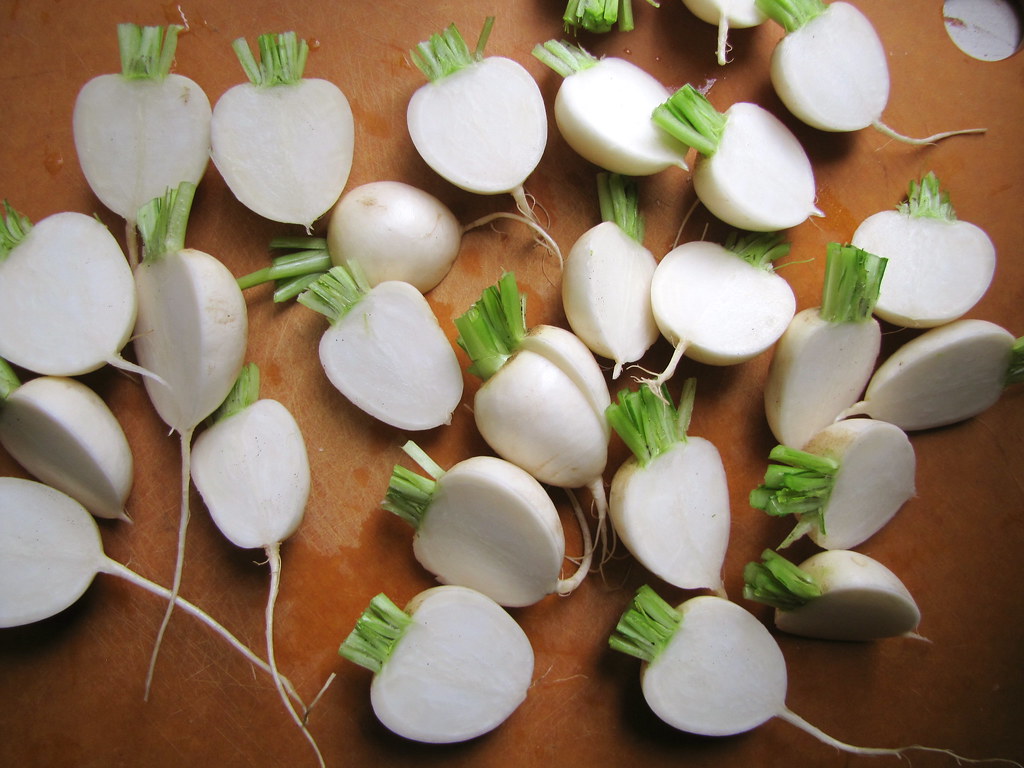 halved and ready to roast 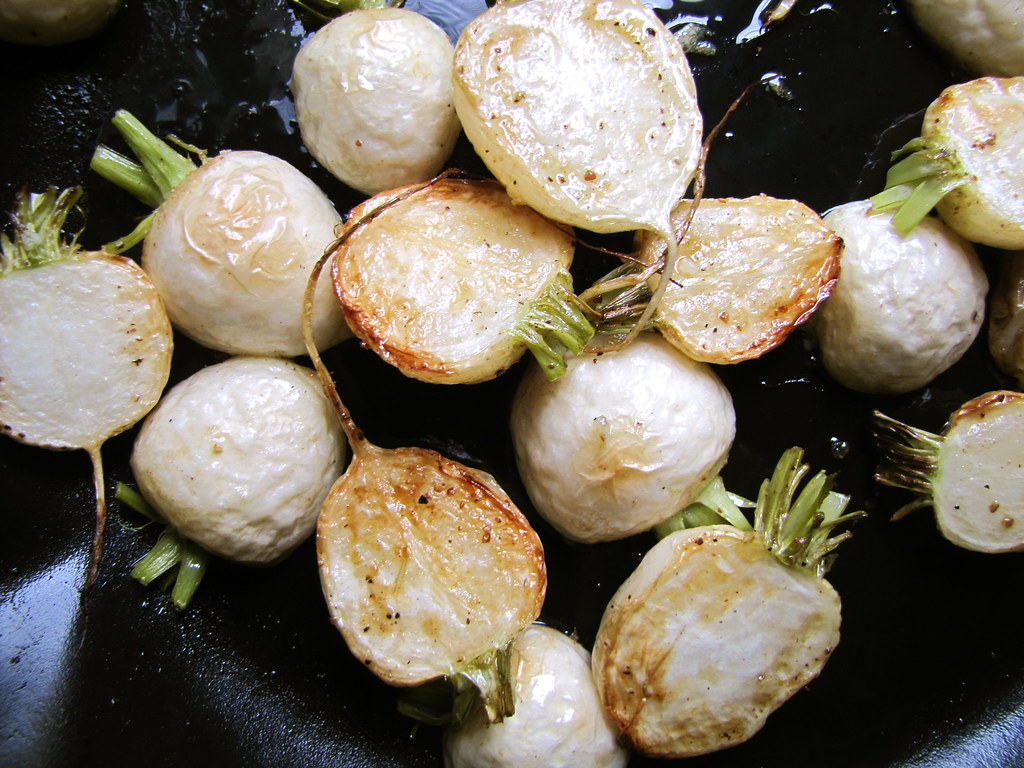 after a quick roast at 425 degrees

Because the hakurei turnips are much more watery than most other types, be sure to bring the oven to a searing-hot temperature, such as 425 degrees, to start out. Otherwise, the turnip halves will spill liquids all over the pan and never quite brown enough. This instant shock of heat, and the help of a thin coat of olive oil, will shock the sugars in the turnips to a Mailliard-reaction brown, while softening their flesh (but not too much). After about 10 minutes, the skins should look slightly wrinkly and a little blushed from the heat. Toss them around in the pan, make sure none are sticking to it. And then continue for another blast on their opposite sides. 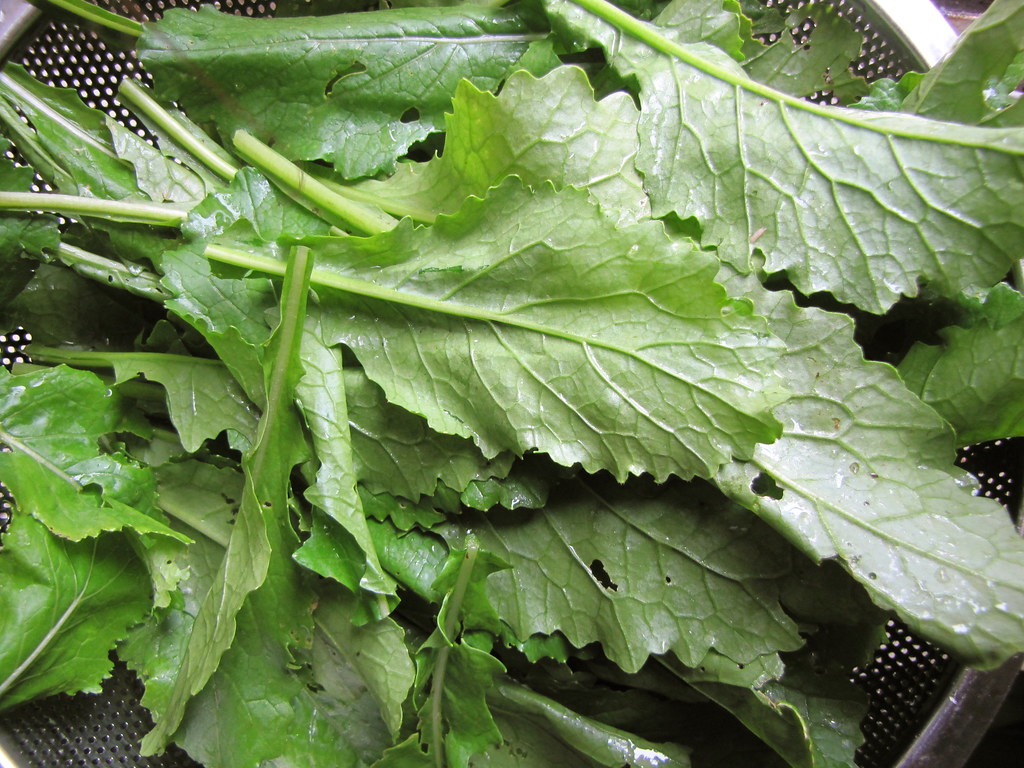 greens from the same bunch 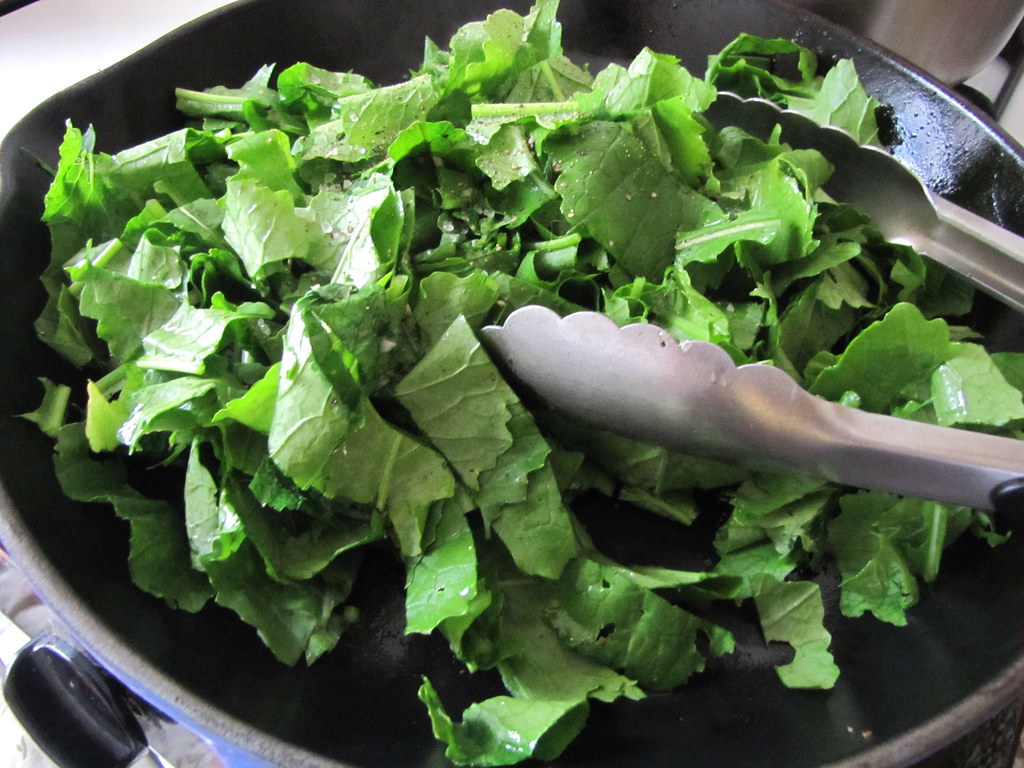 chopped to sautee with garlic

The sauteed turnip greens with garlic are great to eat with these alone, but to create a meal around both them and the roasted radishes, I turned to an unusual starch. I was going to a potluck also, and wanted to bring something more substantial. I’ve had a few cups of Israeli couscous leftover in my pantry for a while; made from the same type of semolina wheat flour as the smaller, more familiar Moroccan couscous, these are simply oversized bobules of the same. So I boiled some of those to toss with a simple mixture of chopped red onion, lemon and olive oil. And tossed in the chopped, sauteed turnips instead of herbs. 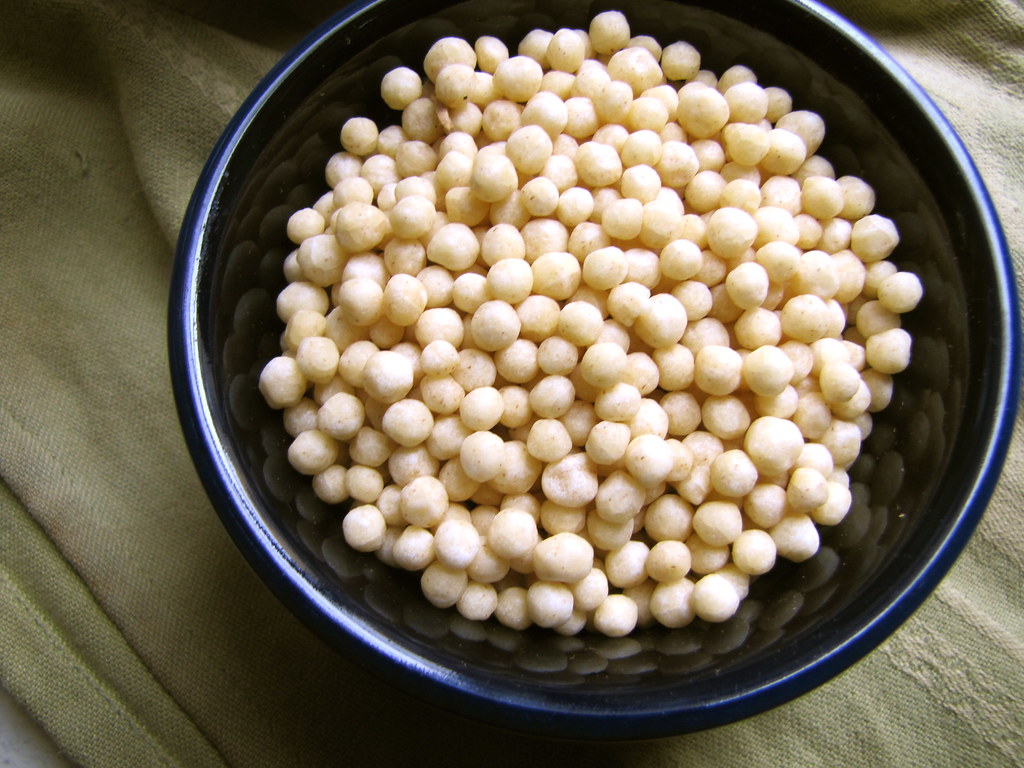 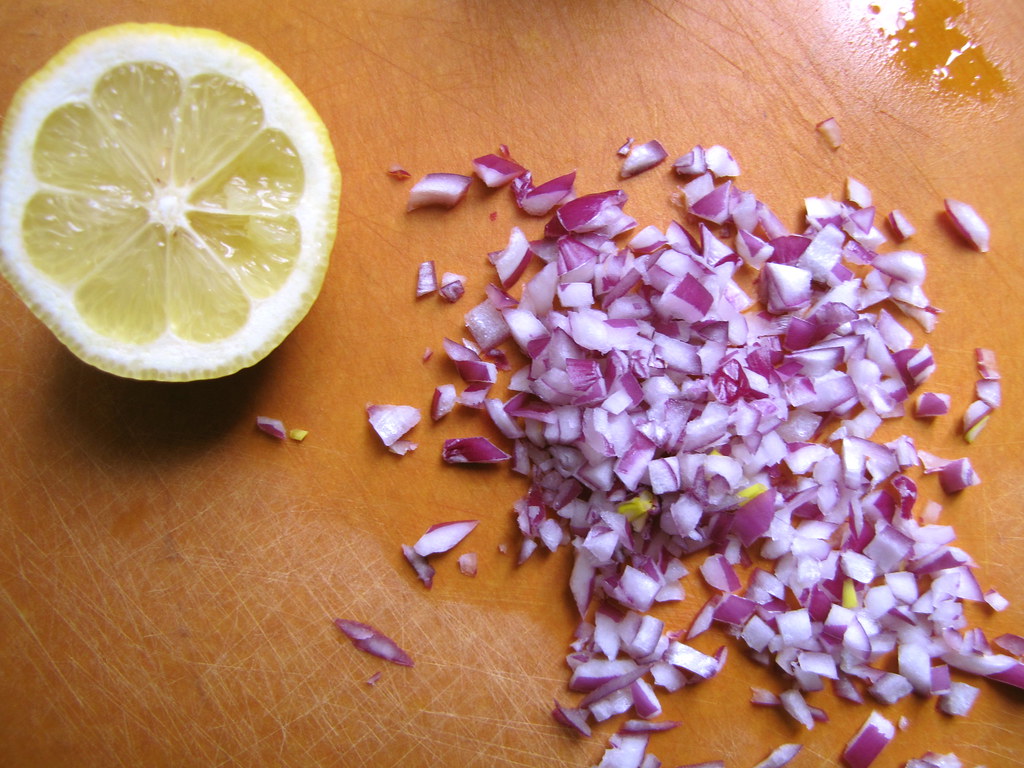 lemon and chopped onion for a simple couscous salad

I figured this party food could be eaten hot, cold, or room-temperature and there was nothing that could be negatively affected from a span of time sitting out. It turned out the weather that night wasn’t perfect for a rooftop potluck party: gusts of unseasonably cold wind kept blowing salads off our plates. But it was an excellent spread nevertheless (when we got it into our mouths along with wayward locks of our blowing hair), thanks to everyone’s contributions. It seemed that salad was a hot menu item that night, too — thanks to the spring’s vibrant greens, there were some with asparagus and radishes, golden beets, all sorts of lettuces, and green beans.

‘Tis the season for all sorts of salads, in spring.

Toss the turnips with 1-2 tablespoons of olive oil, pinches of salt and pepper, and the optional chili flakes. Place flat side-down on a roasting pan. Roast for 5-10 minutes, or just until the bottoms are lightly browned. Toss around in the pan with tongs, and continue roasting another 3-5 minutes. Remove from heat and let cool.

Meanwhile, bring a pot of 3 cups water to a bowl and add the couscous. Continue to boil for 8-10 minutes until couscous is tender. Drain.

Heat 1-2 tablespoons of olive oil over medium-high flame and add the garlic. Once fragrant, toss in the leaves and a pinch of salt and pepper. Sautee until just wilted, 1-2 minutes. Transfer to a bowl and let cool.

Combine the chopped onion with the cooled couscous and greens. Add fresh lemon juice, an extra tablespoon or so of olive oil, and salt and pepper to taste. Serve with the roasted radishes on top.

Two brownie points: Turnip roots are terrific sources of Vitamin C, potassium, and also calcium. Combined with their leafy greens, and there’s even more Vitamin C along with Vitamin K, Vitamin A, and more calcium (the greens are higher in calcium than even cabbage). This is all a lot of healthy phytonutrients and immune-boosting antioxidants for very few calories. Couscous made be made from the same type of wheat flour as pasta — semolina, but carries a lower Glycemic Index (GI) and is more rich in niacin, riboflavin and Vitamin B6 and folate compared to pasta, and also has about 6 grams of protein per cup.

Seven maple leaves: Here’s to using a vegetable from shoot to tail, and one at that just in season locally (from Queens County Museum Farm, so even grown in NYC). This is so easy to do when it comes to turnips or radishes with particularly healthy-looking greens, but it’s also a good trick to pull on herbs — using their stems in soups and stocks or just chopped up along with the leaves — carrots, beets and other root vegetables, too. Consider yourself having two bunches of vegetables for the same price.