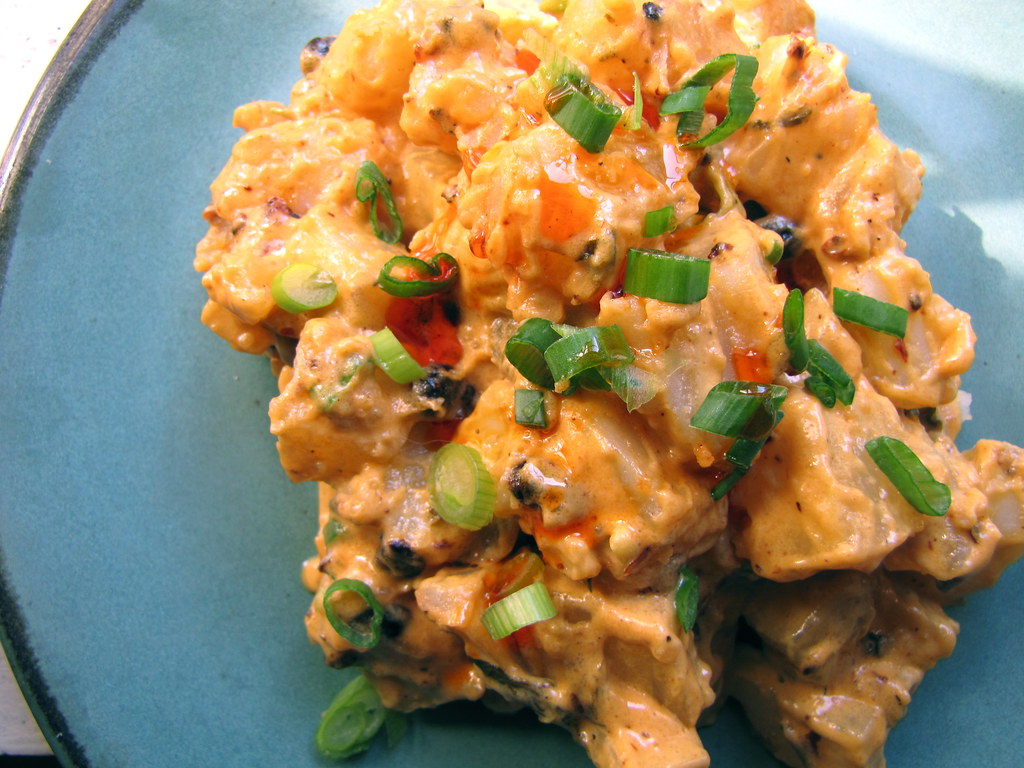 This was a strange idea, for sure. One the one hand, it’s a rich and satisfying, all-American summer party staple, and on the other, fiery-hot, exotic fare. My inspiration for this potato salad was dan dan noodles, a savory and slightly sweet Szechuan noodle dish laced with red chili oil, pungent preserved greens, and Szechuan peppercorns. Actually, I was supposed to bring a potato salad to a party and couldn’t find much else to flavor it with in my fridge.

So this hybrid side dish resulted, and a creamy, tangy, peppery potato salad was served at my friends’ Easter potluck party this past weekend, of all events. It was actually pretty good. The chili oil blended with the mayonnaise to create a sunny orange dressing. The bits of pickled mustard greens were brightened by the fresh cilantro throughout. And in lieu of finely chopped celery, which I might add to potato salads of any type, I used up a cucumber, scraped of its seeds and diced, for some cool, crunchy contrast instead. It was actually delightful. 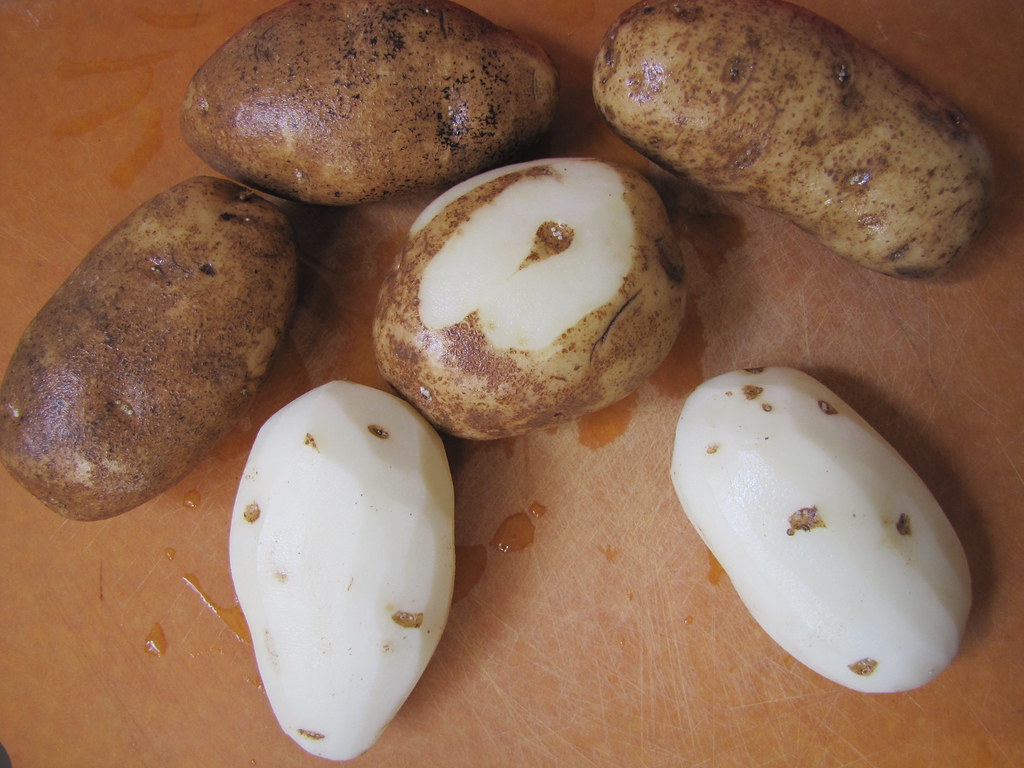 a few pounds of Russets lose their skins 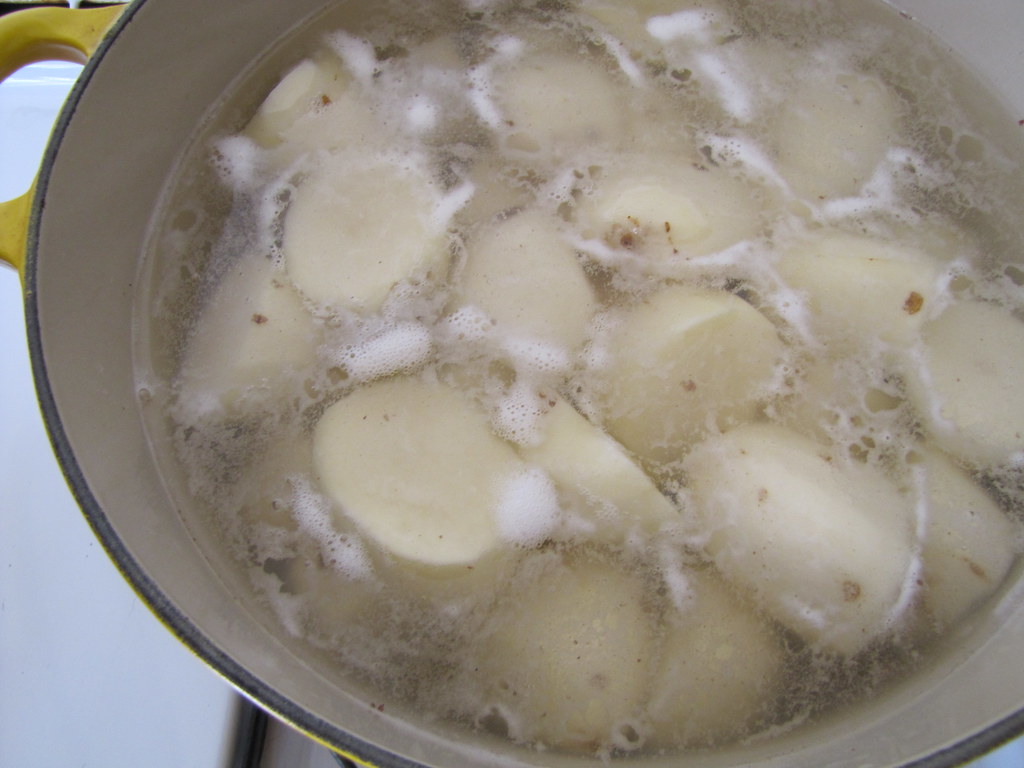 and boil just until creamy-soft

If you don’t have some of the ingredients listed here, have no fear. The only really crucial ones are some Szechuan chili oil — or better yet, a dense, chili-bean sauce (dou ban jiang) with plenty of reddish oil floating on top — and Szechuan peppercorns, if you like a numbing-hot touch. The rest in this combination is pretty staple fare: mayonnaise, rice vinegar, potatoes, cucumber, fresh scallions and cilantro. I like using Russet potatoes whenever I want to create a really thick, saucy potato salad, because when cooked just enough, they break off a little when stirred to add to the sauce. However, you can always use red potatoes and keep their peels on, too. 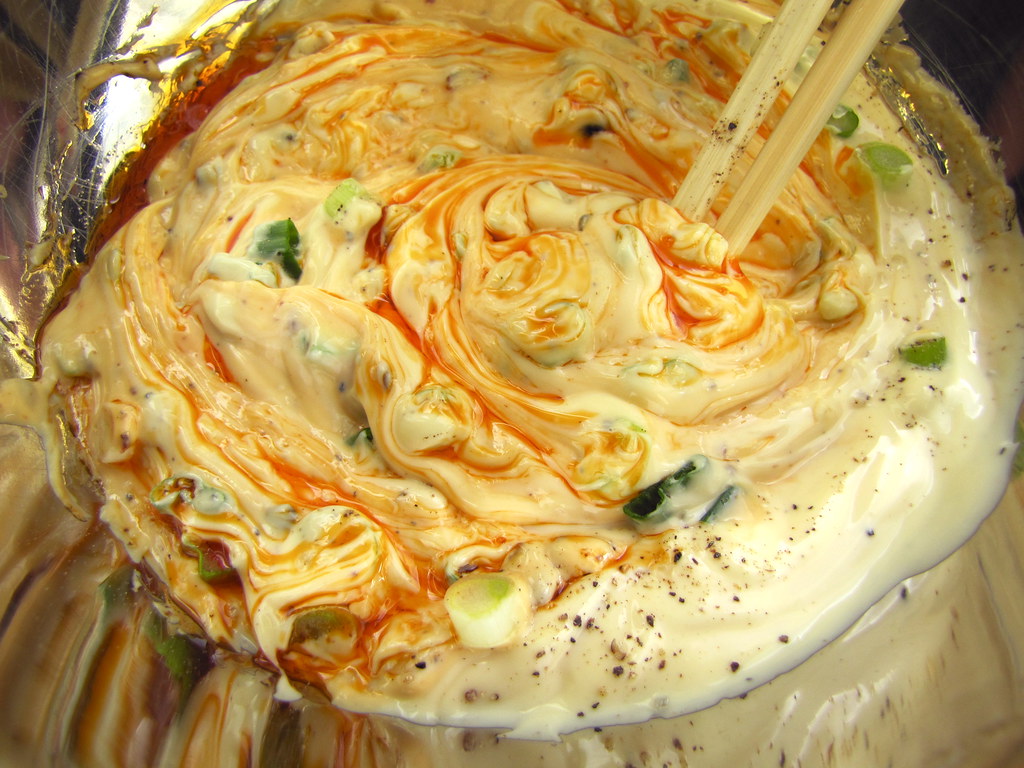 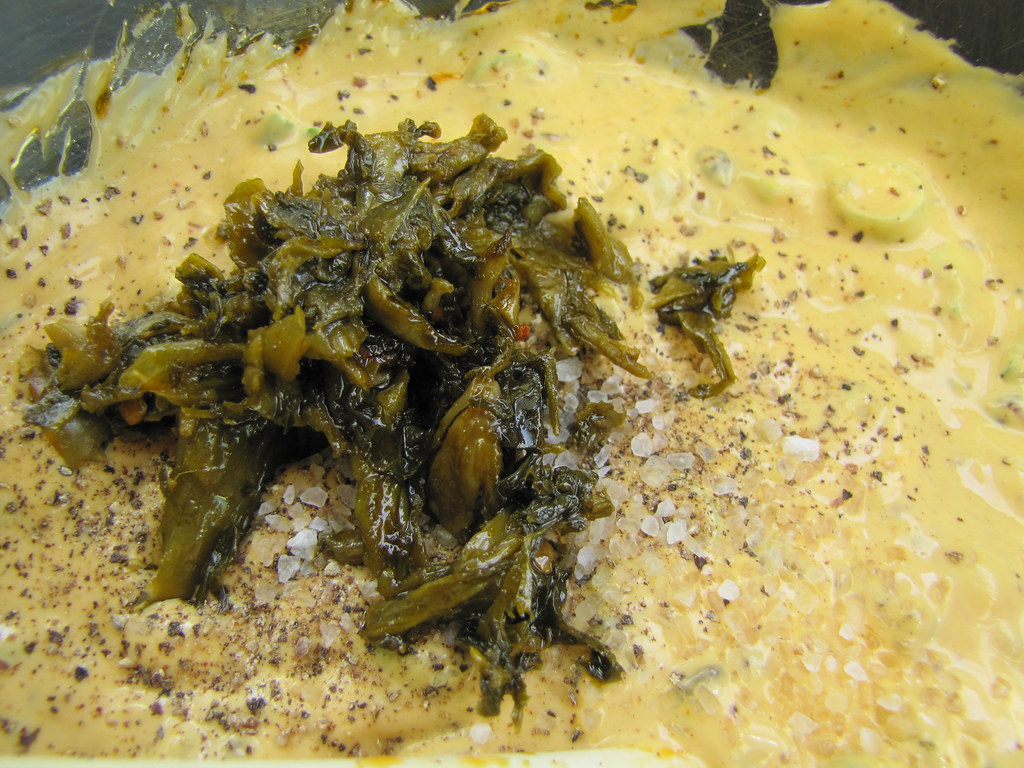 a pinch of pickled mustard greens get mixed in

So if you’re feeling adventurous, and want to treat your friends to a spicy surprise, here’s one way to blend the best of two very different worlds of food. My advice for those uninitiated to spicy Szechuan sauces and dan-dan mian is to give this a try first, as the creaminess of the mayonnaise will help mellow the fire. Then go out to try some serious Szechuan food and have your face melt off. I’m about ready to do that soon.

Boil potatoes completely submerged in lightly salted water for 8-10 minutes or until tender. Drain and let cool. Chop into 1/2 – 1″ cubes.

Meanwhile, in a large bowl combine the mayonnaise, rice vinegar and chili sauce or oil. Add salt and pepper to taste and adjust any of the ingredients as desired. Fold in the pickled greens, cucumbers, scallions and cilantro, reserving some of the latter for garnish. Fold in the chopped potatoes and gently stir to incorporate. Taste for seasoning and adjust as desired. Sprinkle with the Szechuan peppercorns, extra cilantro and/or scallions for garnish and serve.

Six brownie points: Don’t kid yourself because it’s called a “salad” — potato salads are typically very rich, and this one is no exception. With plenty of mayonnaise and added chili oil, it’s a filling and fattening mixture, so eat in moderation. That should be fairly easy, as it has so many layers of intense flavor you’ll hopefully be satisfied after a few bites.

Four maple leaves: New scallions and spinach are hitting the farmers’ market, but this recipe mostly tricks out the lingering winter potatoes. Many very non-local, imported condiments are used here to achieve the signature flavor, though — the chili sauce, rice vinegar and even the mayonnaise — and the cucumber has no place in spring fare for the seasonal eater. It would be fun to try it out again using prime ingredients fresh from the market later on in the summer.