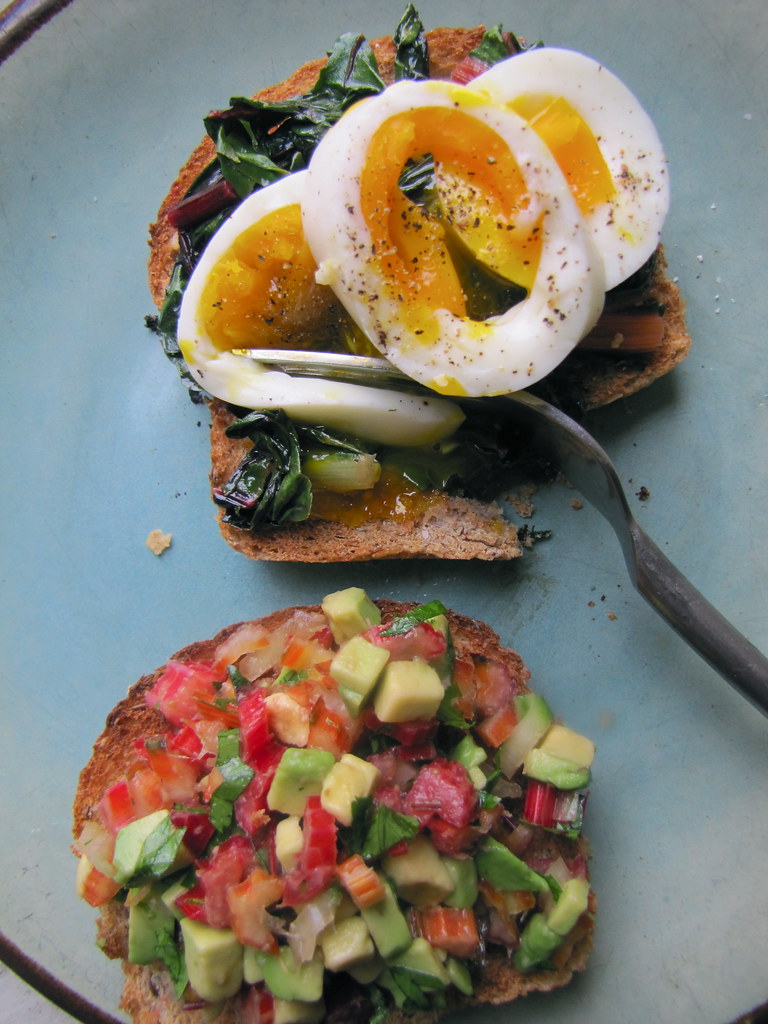 I often shop with my eyes rather than my head when it comes to local food at the Greenmarket. This leads to a fun culinary game later of what to do with strawberries, fiddleheads, and a rainbow trout, for instance. Not the most practical method, I’ll admit, but I’ll stand by it just for the unexpected little solutions to those puzzles like this. Plowing through a bustling Saturday market at Grand Army Plaza, my eyes settled on some of the flashiest gems, and I left with — and not knowing what to do with — a bunch of rainbow-stemmed Swiss chard, and some multigrain bread.


Here are two simple ways these can be enjoyed together. Rather than make a big, bready sandwich, open-faced, piled-high toasts is a lighter, more summery switch and you don’t have to bore yourself with just one filling. 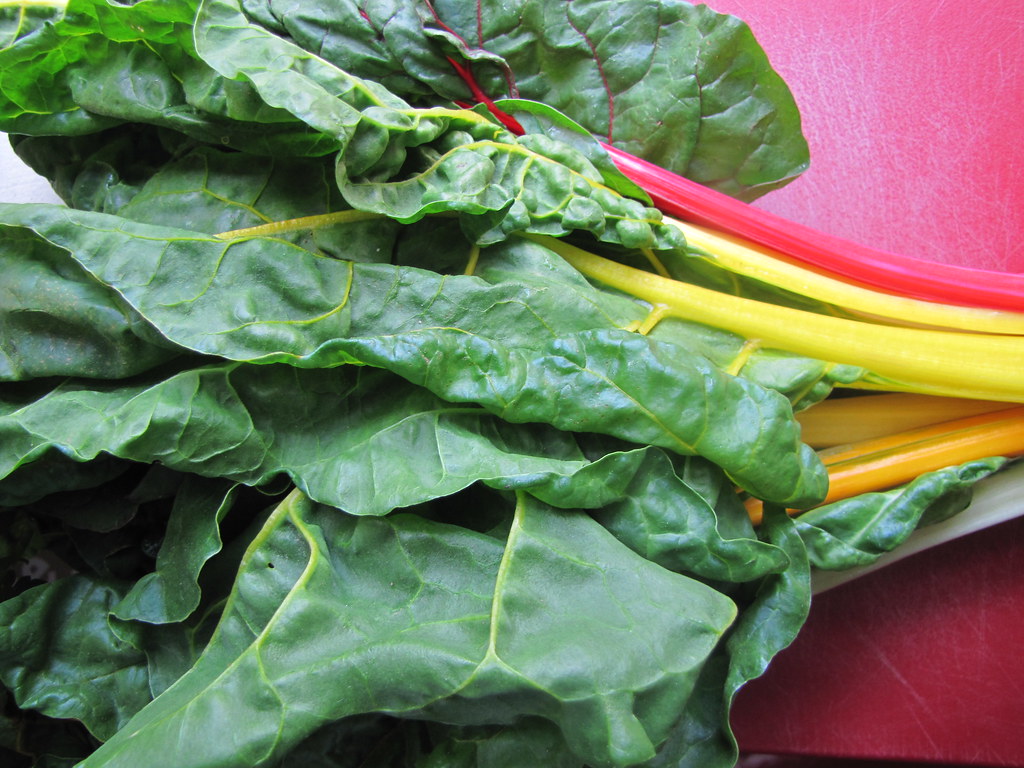 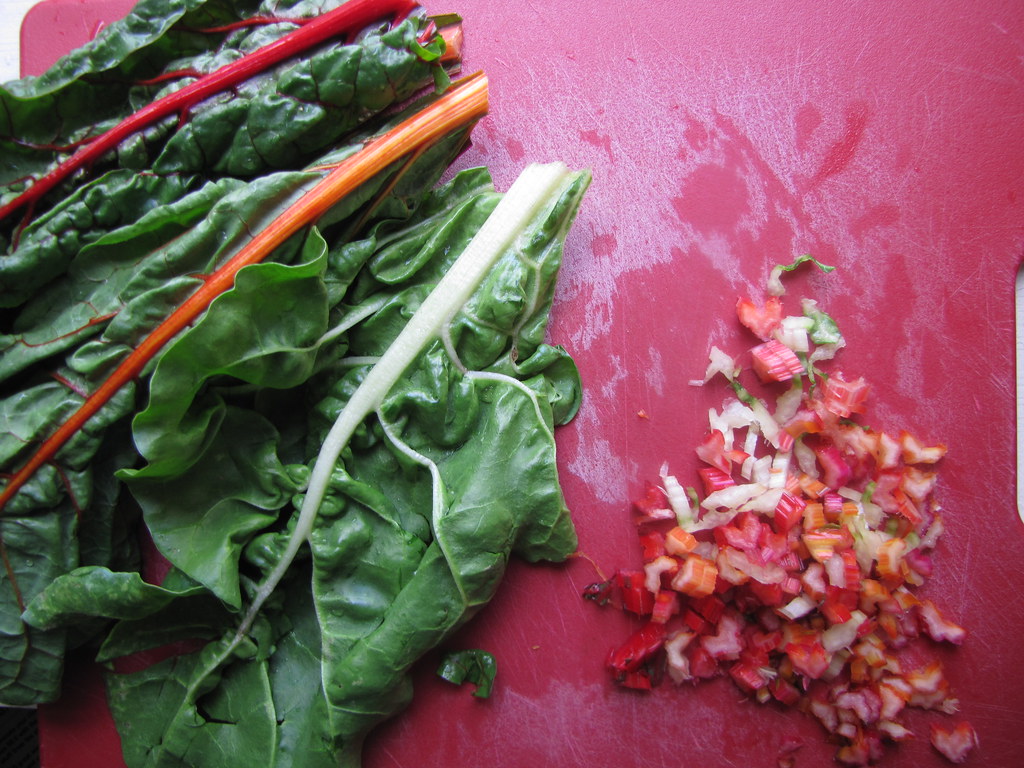 broken down to leaves for sauteeing and crisp stem bits


My first application was not unfamiliar to many snacks and breakfasts made many times before: I sauteed the leafy chard greens to serve on some toast and topped it all off with a soft-boiled egg. Chard is so silky and delicate once sauteed. The second version came about by happenstance; while chopping off the stalks, I decided they’d be perfect for eating just fresh. Crisp, watery and neutral-tasting, they could add some texture to a salad. Or, to just the leftover avocado half in the fridge (from another impulse food-buying incident). 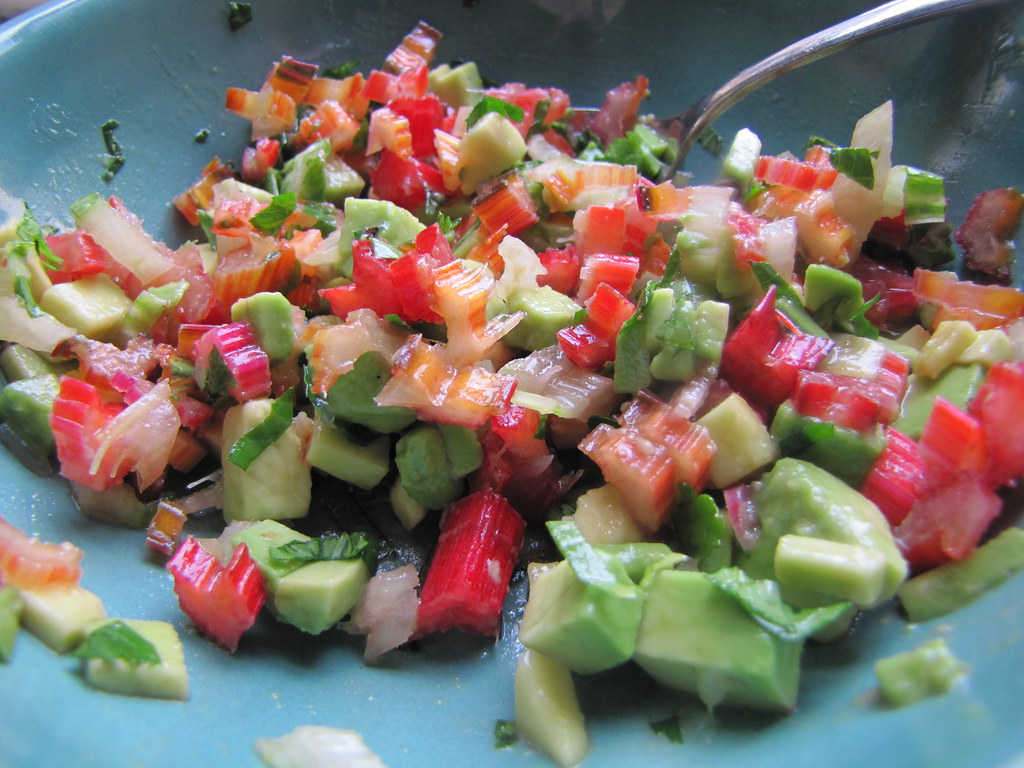 So instead of going into the sautee, the stems were finely chopped and tossed with some cubes of avocado, lemon juice, olive oil, salt, pepper and parsley. It was better than just avocado served like this, in my opinion, and a good move if you’re trying to skimp on portions of that beloved, but fatty fruit. Have a fresh tomato instead? Try mixing chopped pieces of that in instead. Red onions, definitely. They’re never local to where I live, but I just can’t resist an avocado now and then. As for the first toast, with an egg, it’s a good vice to always keep ’em on hand. They cook quickly, provide richness and a “sauce” when served runny, and they’re a solid boost of protein for a single meal. And if you’re really hardcore about always having good, fresh eggs, maybe look into raising some hens, even in the city. 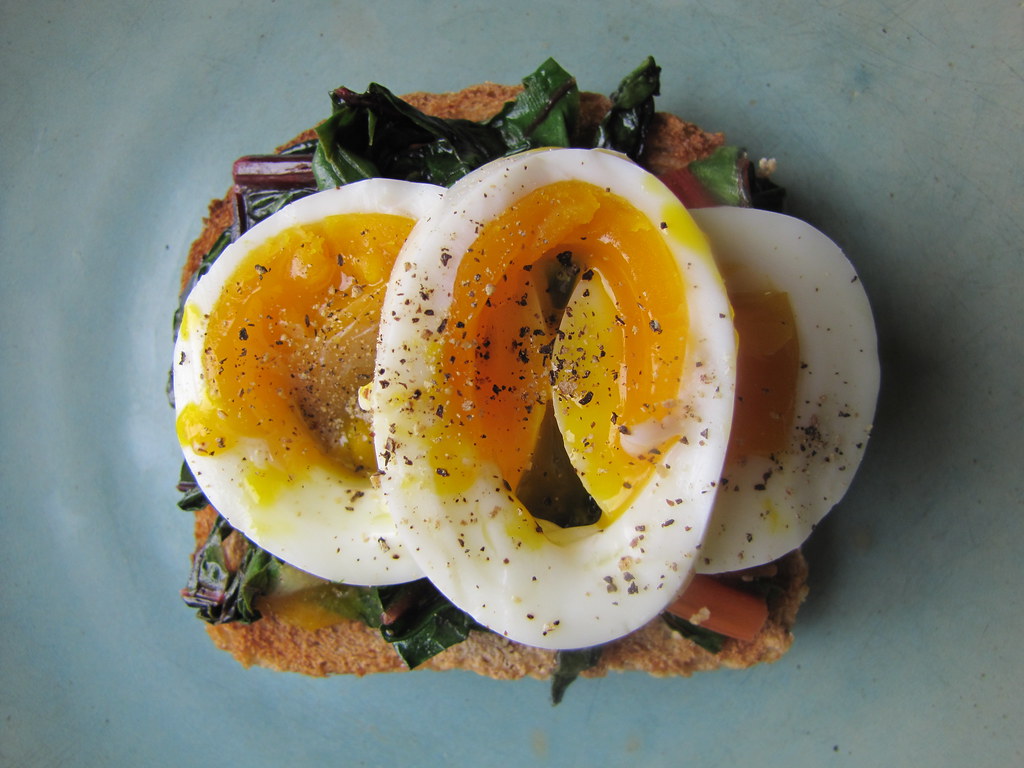 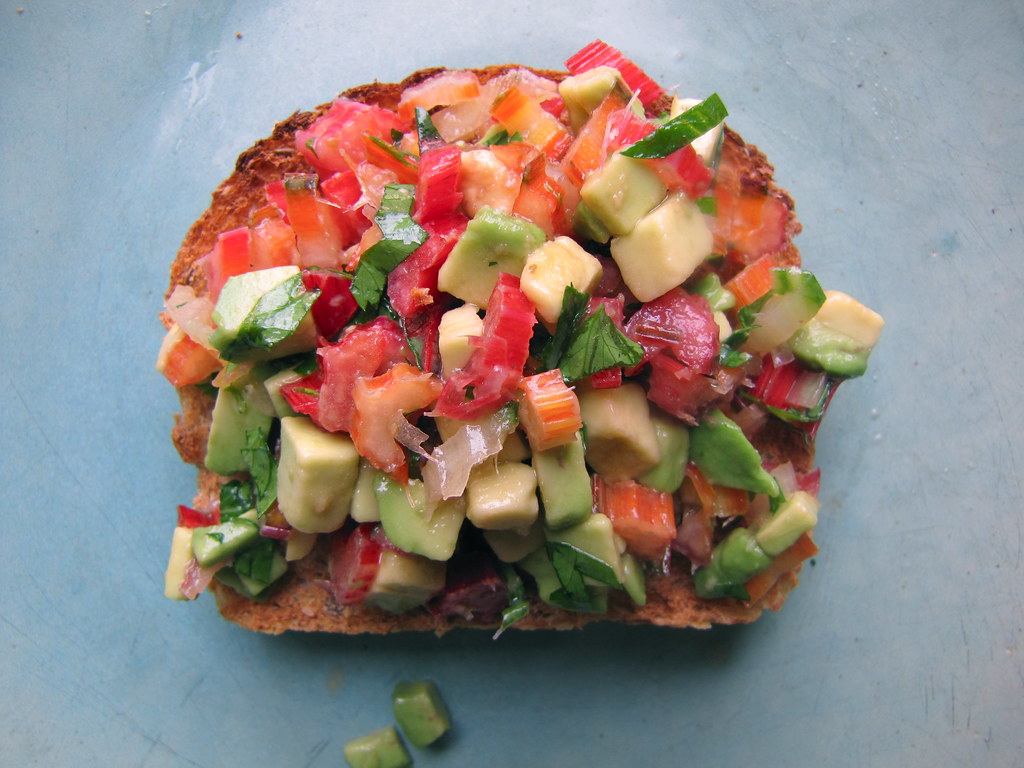 second take, stems only with avocado

Here’s a toast to doing up the humble toast in more ways than one.

Toss all ingredients except for the toast. Can be covered and chilled up to an hour or two before serving, piled on the toast.

Soft-boil the egg until white is fully cooked and yolk is fairly runny, or cook to desired doneness. In a saute pan, heat the olive oil and add the chard, seasoning with salt and pepper. Cook, stirring, over medium-high heat for about 2-3 minutes. Transfer to the toast. Top with the sliced soft-boiled egg.

Cost Calculator
(for both half-sandwiches)

Five brownie points: I’d consider these well-balanced, though not ultra-healthy, miniature meals. Swiss chard is an excellent source of Vitamin K, Vitamin A and Vitamin C, and there’s even more beta-carotene with all those different colors in the mix. A half-avocado, while rich in saturated fats, provide the fat to help those nutrients absorb in you even better, as does the olive oil, another heart-healthy plant-based fat. An egg a day won’t hurt you, either — especially when its deep orange hue is telling of its richness in vitamins, too. And with bread, any time you can sneak in a whole grain version rather than just white is a very easy and rewarding point you can give yourself, too.

Six maple leaves: It gets easier and easier eating green as the summer goes on. It’s only just begun, and there’s already a great variety of produce available locally at the Greenmarket, so let’s enjoy it. Aside from the Swiss chard (maybe the most stunning bunch I’ve seen, from Evolutionary Organics farm), bread, and homegrown egg and parsley, the avocado stands main culprit to making this a non-strictly local meal. (And it was enjoyed thoroughly.)