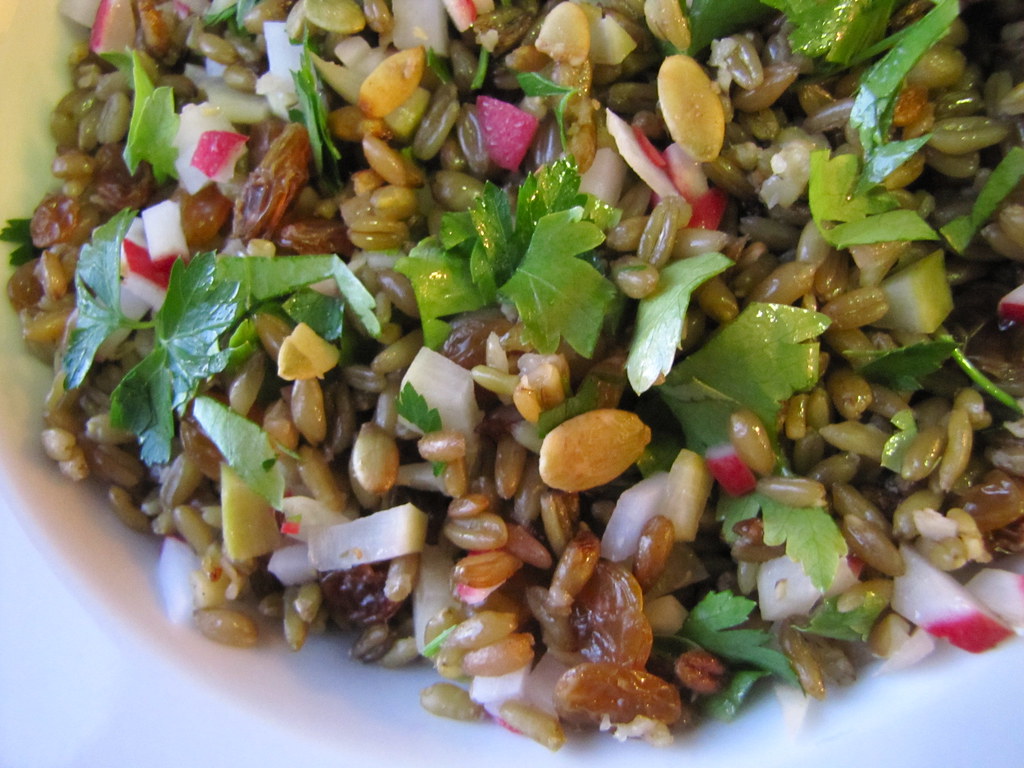 In the past couple months, I have gone off such the deep end into Eastern philosophy it’s embarrassing. I’ve traded coffee for tea, drunken bike crashes and homemade hangover brunch parties (as recalled in The Art of Eating In) for bikram yoga and granola with soy milk. I don’t know what’s going on. My latest obsession is with macrobiotics. It stresses the importance of many of the things we’re already privvy to about food (unprocessed, well-balanced), but much more, like directional energy, color, and stuff I still can’t comprehend.


Here’s one thing I can: whole grains are better than refined. Sure, knew that. But this ancient wisdom really drove the point home. Refined grains have a higher glycemic index than whole, and are lower in vitamins and minerals by an astonishing drop. Just think, all the work that went into refining wheat could have been curbed, saving so much energy — and giving us more. So instead of bread, rice or pasta, my usual go-to grains, I cooked some chewy whole grains of spelt. Mmm, good. 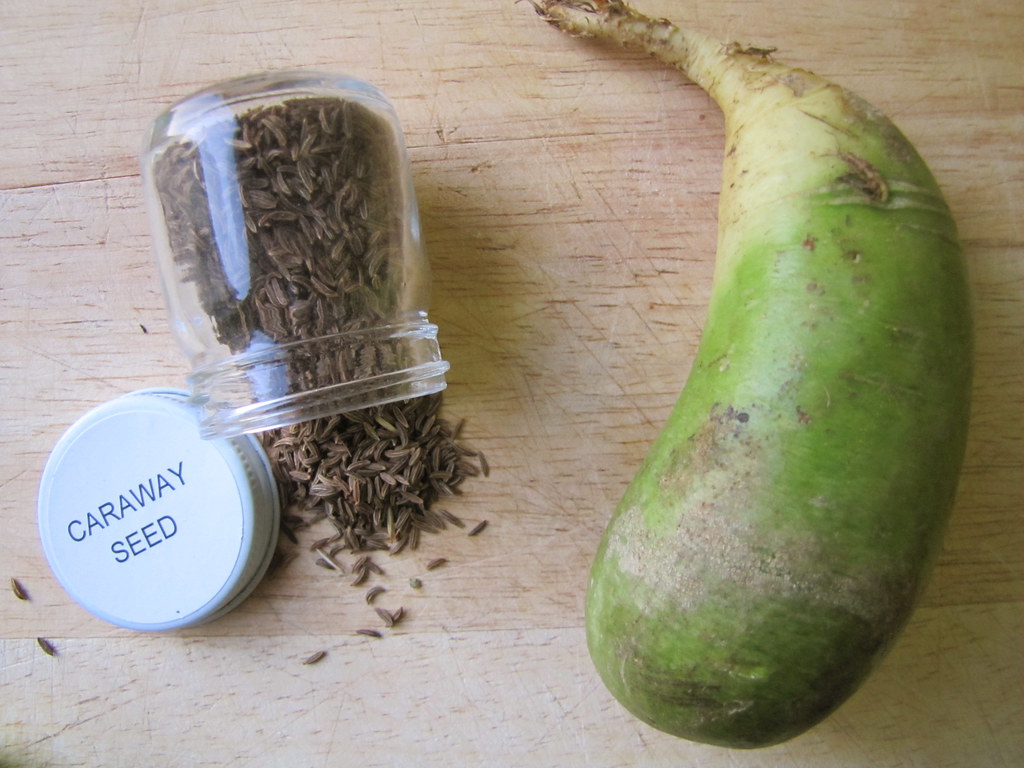 And because it was evening, it seemed a good time to ground my energy, keeping it low and getting prepared for hibernation at night. So I added some radishes, because they grow downward into the soil, and emit some of that energy when you eat them. (If this sounds wonky, just skip ahead.) But a little fresh parsley tossed in, too (which grows upwards, lending that sprightly, energetic air), would keep me awake for some homework. I’m not sure what the golden raisins do but add some sweetness and a complementary texture to the cooked grains. And if you ever want to feel like a real, granola-crunching hippie, just buy a pack of pumpkin seeds. That’s when you’ve officially crossed the border into the land of happy faces and flowers. 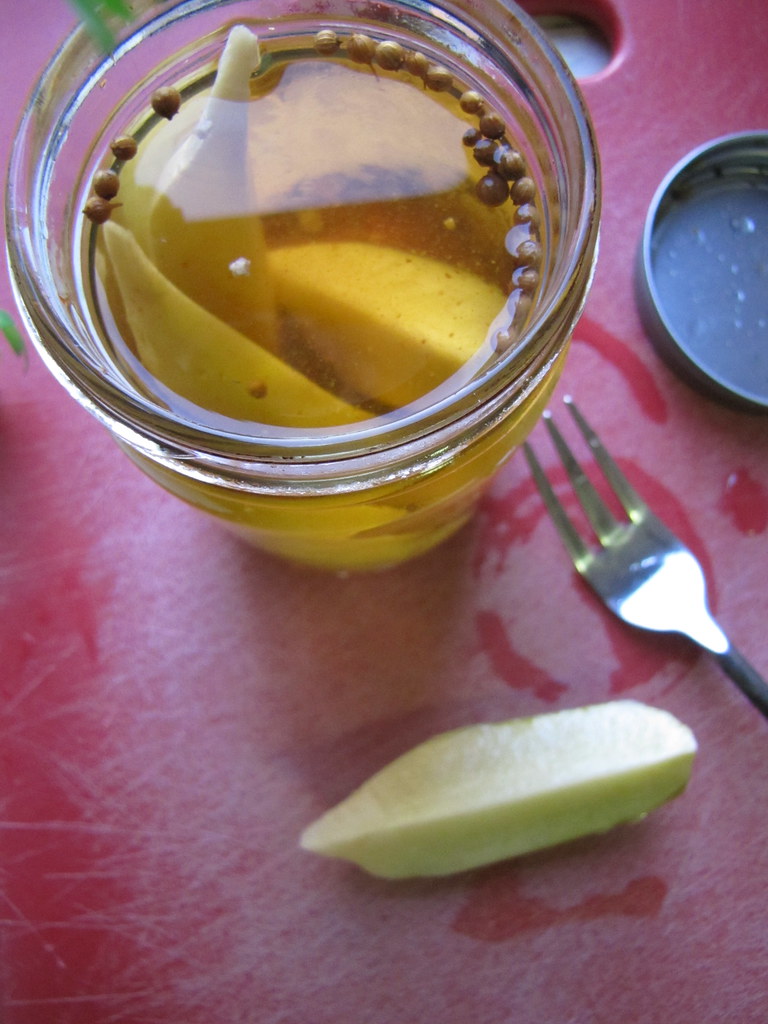 This might be strange theory but this salad was, in all seriousness, really satisfying. Thanks to the radishes, some of which were pickled weeks before in a tart apple cider brine with whole spices, including caraway seeds. That, and generous glugs of good olive oil. The pickled radish was one of my favorite varieties, a “green meat” radish, which has an oblong shape and spring green flesh that’s denser than most types, and oh so delicious. When I bought one at Evolutionary Organics‘ farm stand at the Grand Army Plaza Greenmarket, the farmer lamented it had such an unattractive name, for such a gorgeous species of the root. I agree. 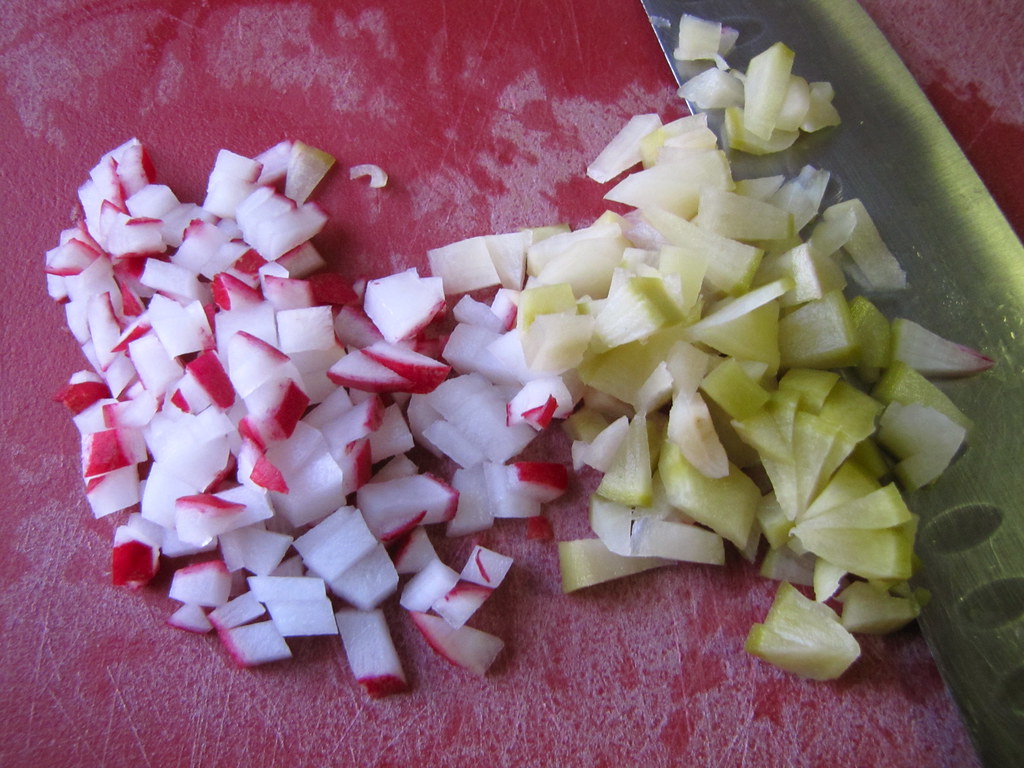 Then, just because they were around, a couple fresh sparkler radishes were chopped to the same size and tossed in. And extra caraway seeds were toasted and sprinkled, just for a little reinforcement of that flavor. Instead of fresh lemon juice, which was not to be on hand, a light drizzle of apple cider vinegar was stirred in. The crunchy, toasted pumpkin seeds were added last.

Taste is mental, and it’s often the case that when you think that what you’re eating is good for you, it will taste better. Most people want to eat well for their bodies, when not enjoying a wickedly destructive fried chicken binge. So whatever your idea of what healthy is, you can take extra pleasure in knowing that something you’ve made will benefit you beyond its initial good taste. And that, alone, can lift your spirits. Namaste.

Cook spelt with 1 1/2 cups water over medium-low heat, covered, about 20 minutes, or until tender and all water has been absorbed. Fluff and let cool uncovered.

Combine the rest of the ingredients and toss thoroughly with the spelt. Adjust seasonings to taste, and serve.

Two brownie points: There’s clearly a whole other dimension of health and nutrition to consider about food, as found in macrobiotics. But on a level that’s a little easier to digest (no pun intended) this dish is thoroughly great for you. Its ratio of whole grains to fruit and vegetables is well-balanced, and radishes are a good source of potassium, fiber, and Vitamin C, and provides some calcium. Parsley is a power food with so many vitamins and minerals and so few calories and a low glycemic index, so eat it like a vegetable rather than an herb. Some plant-based fats in the olive oil and pumpkin seeds helps you absorb all of them.

Six maple leaves: It’s also important to eat seasonally and locally in macrobiotics, as it turns out. In this dish, the grains from Cayuga Organics were of the same region, and so were the radishes, parsley and pumpkin seeds. Raisins are typically from California, however, and olive oil’s not to be found native to the Northeast, either.