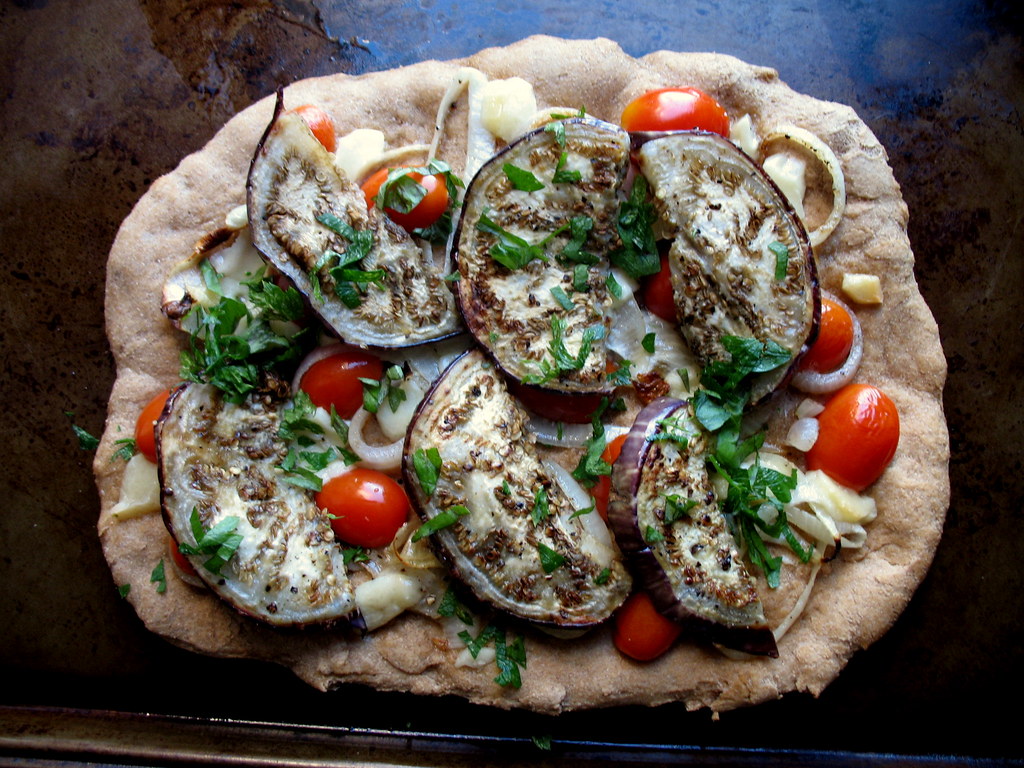 Fairly good dough, that is. And good for you, too, since it’s whole wheat. I have had many d’oh‘s when it came to pizza-making in the past. I’ve been a regular Homer Simpson at times. But I’ve gotten the hang of it, and when I put up this photo of a recent weekend lunch on my Flickr page, I got such a response from friends wanting to know more about it, especially the dough. So I thought it only right to comply.


Making pizza dough used to be something that gave me such headache that I’ve acquiesced to purchasing pre-leavened raw dough from pie shops, and even advocated doing so on this blog. I still feel this is the easiest, quickest route to turning out a delicious personal pie at home. But if you’ve got a little time to spare, and a discerning palate, then the homemade version can be oh so much better. The thing about the plain, puffy white flour crust that’s produced from pizza-shop dough is that it’s often so light, flimsy and oily. I prefer to sink my teeth into something with a little more meat — not dense, but chewy, and crisp on the outside. 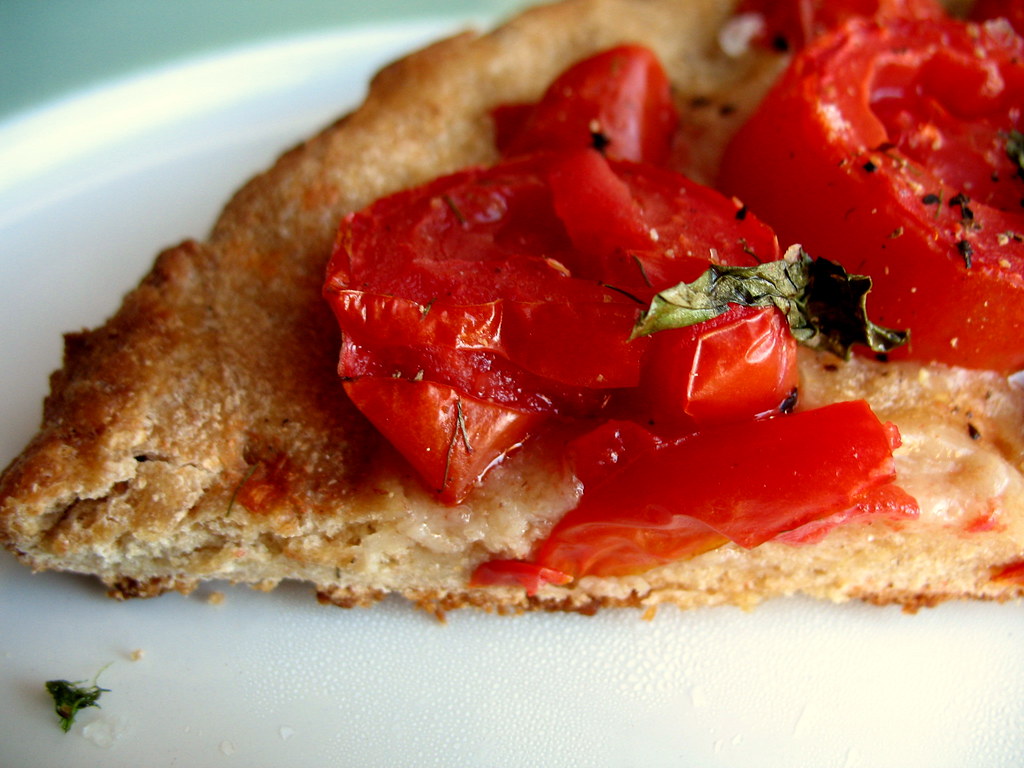 I’ve been such a devout follower of the Jim Lahey No-Knead Bread scribe that I can’t fathom baking anything bread-like without at least following its first step, and leaving the just-mixed-with-water flour and yeast out to sit overnight. I know the extra hours make it seem like this recipe is such a taxing chore, but really, how hard is it to dump the ingredients in a pot, stir three times, and cover it with a towel before you go to bed? I do this probably every three nights. The next day, you can begin your real pizza-making scheme. What’s wrong with having something to look ahead to, anyway? 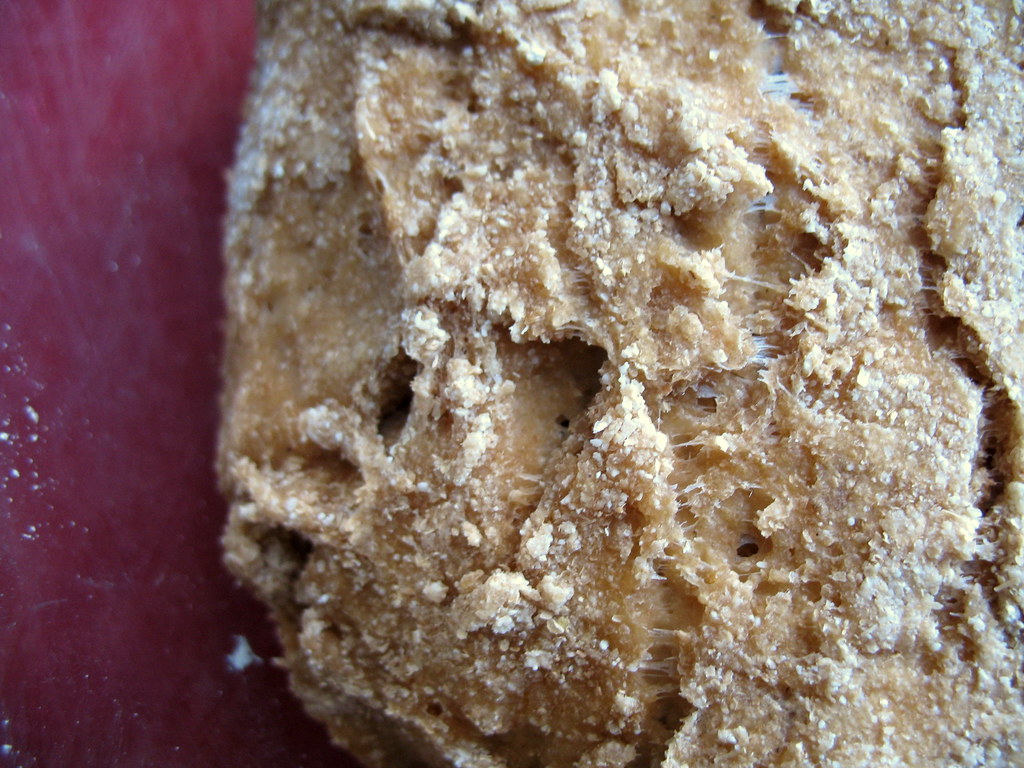 click for a close-up on the bubbly, stringy surface of the dough after sitting overnight 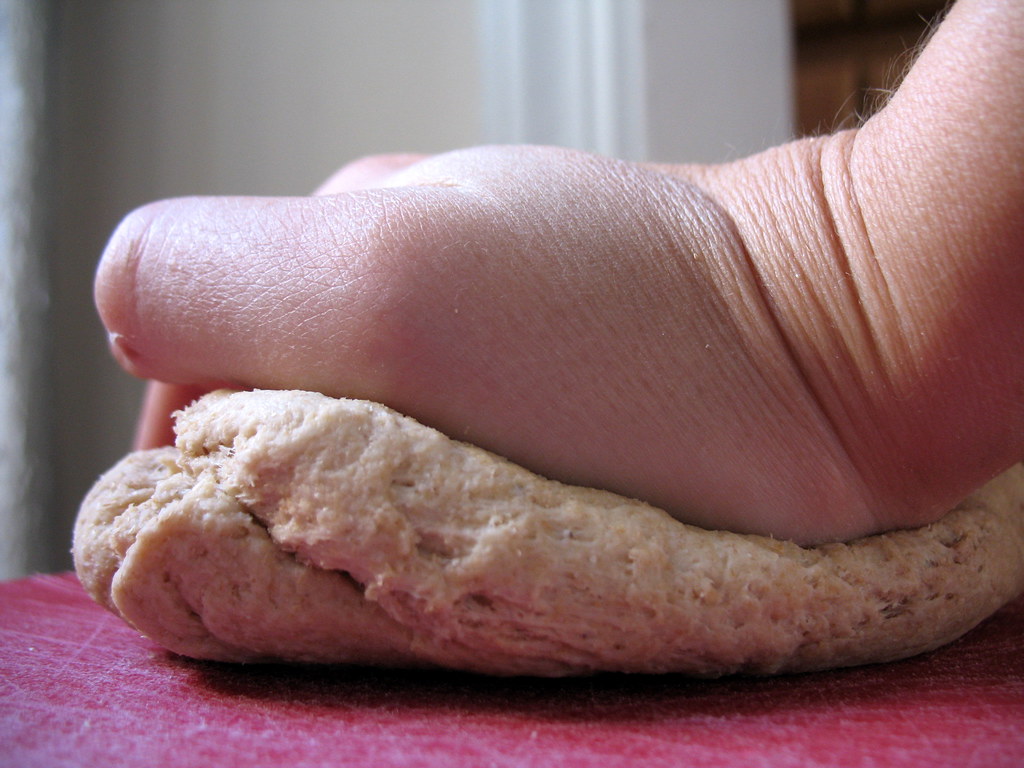 Once you’ve scooped your lump of yeasty-smelling dough out of the pot, place it on a (preferably skid-free) cutting board. The secret to getting the inside of the crust airy is, unfortunately, just a few minutes of kneading time. This will get the glutens in the wheat pumping and eventually puffing up the crust in the oven. No, no flamboyant tossing in the air and catching is needed. With whole wheat dough, I don’t even find the need to flour my hands or the kneading surface, either. Somehow, it just stays together without sticking to things better than white flour dough. 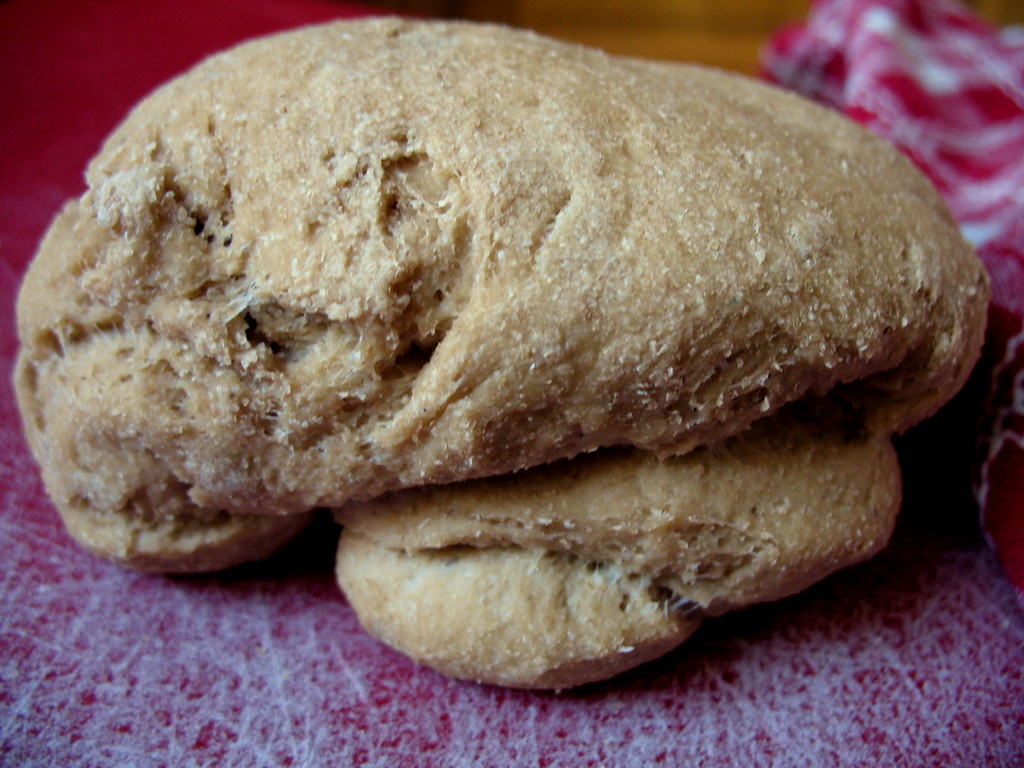 rested, and ready to stretch out and top

With the dough technique down (as described in more detail below), then toppings are all a matter of taste, seasonality and your own sense of fun. For the pie in the first photo, I sliced up a few rounds of eggplant and roasted them in a hot oven with olive oil. I baked the pizza with sliced grape tomatoes, sauteed onions and some slices of Gruyere, and once it was out, arranged the roasted eggplant on top. As a finishing touch, a sprinkle of fresh parsley and basil was added. And that was the “simple” lunch that spurred my friends’ envy. Try it sometime. 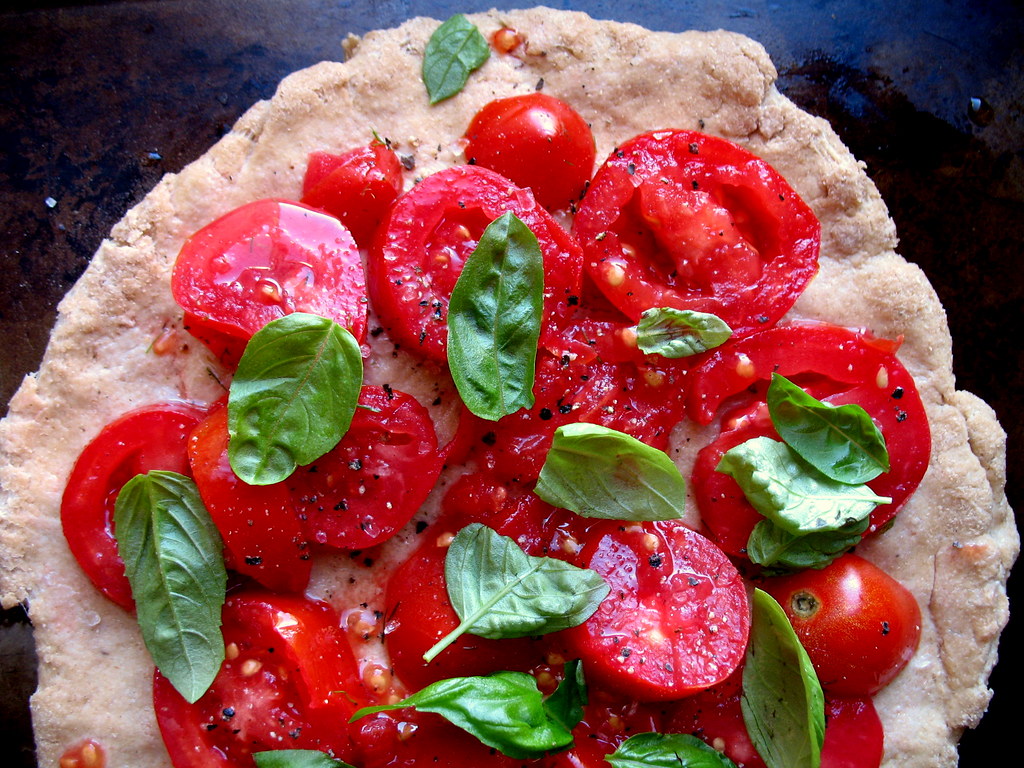 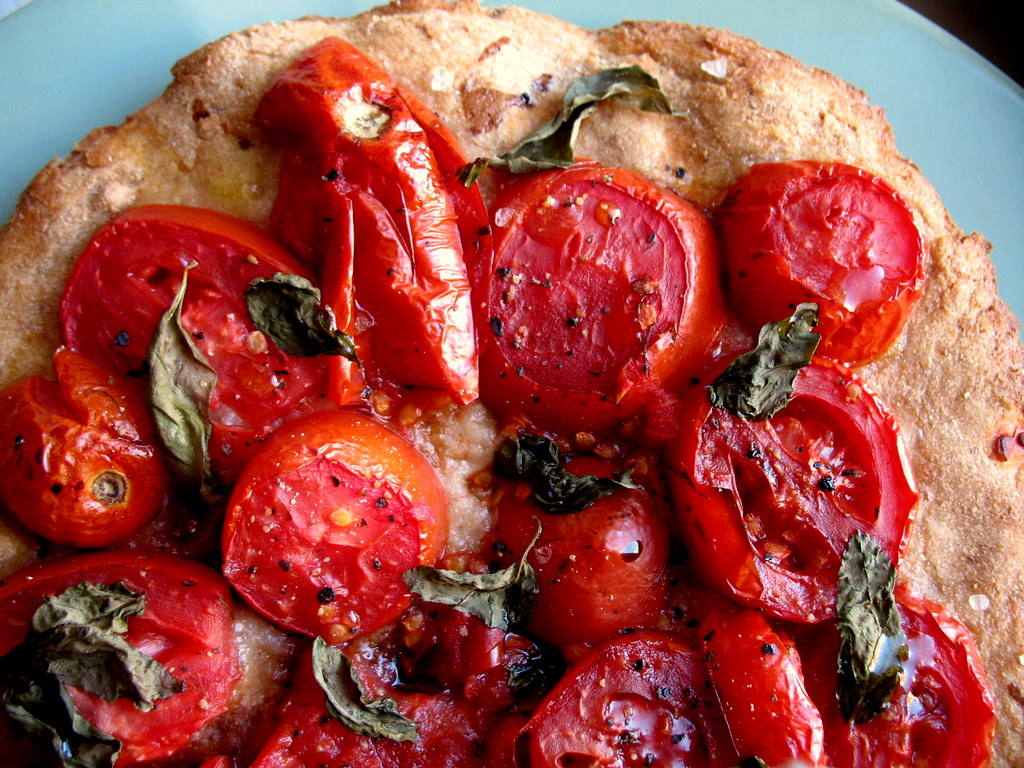 Or, for an even lazier weeknight meal, I made one with just sliced tomatoes (from a great, big bag of overripe ones at the Greenmarket), basil, olive oil, sea salt, pepper and a splash of balsamic vinegar. Who needs cheese?

Mix the first four ingredients in a medium bowl until just combined. Cover with a cloth towel and place in a warm place (i.e. not by an open window) overnight.

Turn dough onto a cutting board. If necessary, flour the surface and your hands to prevent sticking. Knead dough approximately five minutes. Form into a ball and cover with a cloth towel. Let sit in a warm place for 1 1/2-2 hours (go do your laundry/return library books/whatever).

Stretch dough out to desired shape (rectangular or circular, it doesn’t matter), and place on a baking sheet well-coated with olive oil. Press dough with your fingers to even out the thickness. If it tears, simply press the spot back together. Top with whatever ingredients you desire. Bake in a 400F oven for about 15 minutes, or until toppings are melted/roasted and the crust is just browned on the bottom.

Recipe deemed too facile by Editor to include Cost Calculator, Health Factor and Green Factor ratings.