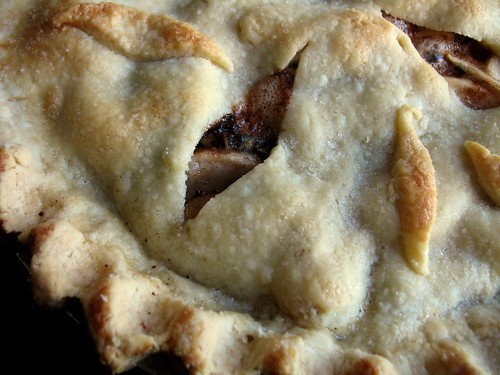 Things I like about fall: apples… sage… toasty, nutty flavors like browned butter… Oh wait, I guess I’m only referring to food I like in the fall. I have a one-track mind much of the time. Good thing there are occasions for such obsessiveness, one annual Brooklyn tradition being the apple pie contest at Enid’s.

Whoever came up with the idea for this bake-off four six years ago could not have predicted the throngs of hopeful bakers that would rush to its gates. This year’s contest again trumped the previous year’s turnout with forty-three apple pies in competition. With the line spilling out of the doorway when I arrived, just a few minutes past deadline-time, I was able to observe that most of these contestants were locals, young, and yes, hipsters. With a whole lot of baking chops, no less. What’s happening to this neighborhood? A viable cook-off revolution? I can’t help but hope that I may have helped to inspire the insanity. 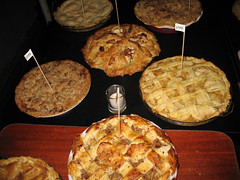 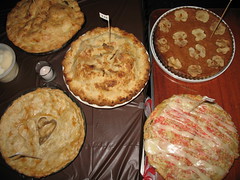 a glimpse at some of the 42 goodies 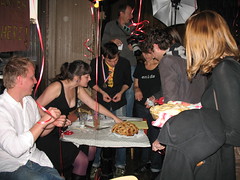 This was my first time entering the contest. I didn’t have any high expectations, but wanted only to make a memorable-tasting pie. After doing some tinkering with brown butter steeped in sage recently, I thought that these might lend a savory, seasonal presence to fresh-baked apples, surrounded with a buttery, slightly salty crust. 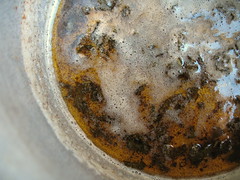 brown butter solids sink to the bottom along with sage

Brown butter has a one-of-a-kind flavor that’s really quite impossible not to love (especially in the fall). It’s no wonder the French sometimes call it beurre noisette, or hazelnut butter, because of its rich, nutty flavor and golden-brown tone. And this all happens just from cooking the butter over for about a minute. That’s what I call food science — simplified. I rolled sage leaves lengthwise and sliced them thinly (to chiffonade, as I learned from Michael) to infuse in the butter, and that made for sage brown butter. Next, I gave my sliced apples a minimal coat of both sugar and spices, and tossed them with more sage slivers — sorry, chiffonades — for a little extra herbal prominence. 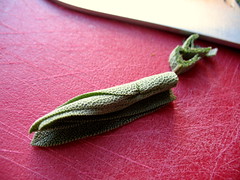 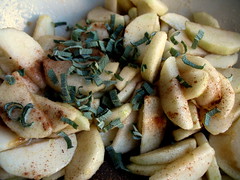 I generally don’t place much emphasis on decoration but because sage leaves have such a distinct, lovely shape I decided to play up this theme on the crust. I first cut four sage-shaped slits in the top crust, and used the cut-out pieces to place on the top. It looked kind of sparse, so I cut a few more leaves from extra dough and decided to affix them asymmetrically, sort of like a scattering of fall leaves. Brushed with cream for golden color and a sprinkle of sugar in the raw, and it was into the oven. 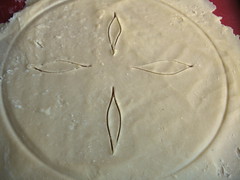 As usual, I didn’t make a test batch so the pie I brought to the cook-off was my first go at the recipe. If it sounds ludicrous that it cinched third place against the forty-two other contenders that evening, it is — because as you might have noticed above, all of the pies were pretty ludicrously delicious-looking and diverse. What isn’t so surprising is who won second place, announced just after my award was. 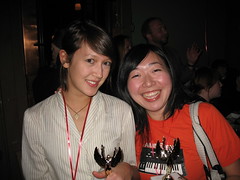 Yeah, as I’ve said a few times on this blog, Karol just wins. This was her second second-place prize at Enid’s apple pie contest, and to keep her title she baked this mighty precious-looking, supernaturally tasty pie. 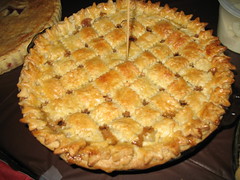 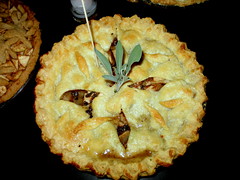 I stuck a ceremonial sage sprig through the center of mine

And for first place, a round of applause for perseverance: the duo of Sam Rio and his girlfriend (whose name I missed) have entered and have come close to greatness at Enid’s before, and finally pulled through with the big win. When I asked Sam what he did with his pie, his response: “Oh it’s really basic, it has rosemary and truffle salt in it.” (!!!) This, folks, may be some insight into a very Brooklyn cook-off-skewed mind. 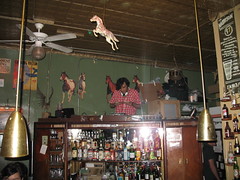 There were of course the special categories. The title for “Most Pretty” was given to a woman named Cheryl, I believe, whose pie had a picture-perfect application of pastry leaves (leaf cut-outs were a big thing this year). For the “Just Like Mom’s” category, a woman whose name I didn’t catch (holler if you’re out there!) won, and I heard later that the judges had an interesting pow-wow over what exactly this title meant. Emily Farris felt that the slightly hard, irregular-shaped pieces of apples inside the winning pie were reminiscent of her mom’s charmingly imperfect baking. Harry Rosenblum scratched his head and said that it might mean “most basic.” (Indeed, among the table of the forty-three pies there were only maybe five that you could say looked “basic.”) Finally, a new category was announced that night, to reflect the three or four pies that incorporated both ingredients: “Best Pie with Bacon and Cheese.” That award went to Alex of Blondie & Brownie, for a happy marriage of bacon and Gruyere. 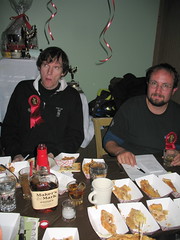 and the able-stomached judges are: Rob Sheffield, music writer; Harry Rosenblum, of The Brooklyn Kitchen 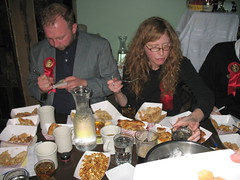 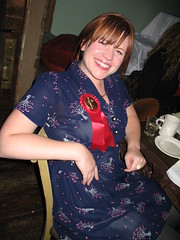 Now, you might have noticed that I’m chummy with two or three of the judges on this particular panel, and smell favoritism in the works. But I can assure you — and just confirmed with a likewise hungover Emily, who kindly closed out my bar tab that I left open at Enid’s — that the judges had no idea whose pie was whose. When I arrived, the place was so swamped that I’m not sure who took my pie to the table, or where the judges were. I think an extra-special award needs to be handed out to all five of them, for dutifully eating, tasting and critiquing those dozens of desserts.

Now, if you’re ready to bake the third-best pie in Brooklyn, here’s the magic formula!

Combine the flour and salt for the crust and cut in the butter using a pastry blender, food processor or your hands until the mixture resembles a coarse meal. Gradually add the water a splash at a time until the dough is just moist enough to form a ball. Divide into two balls, cover each with plastic and chill while you prepare the rest.

Heat 1/4 cup of butter in a small saucepan over medium heat. Add about half the sage, and cook until the butter just begins to stop fizzing with bubbles and turns a light caramel hue. Remove from heat (the butter will continue to cook while it is off the stove, so the eventual color should be a more amber, brownish hue). Let cool. Mix the apples, lemon juice, sugars, spices, salt and the rest of the sage in a large bowl until well combined. Add the cooled brown butter and toss to mix throughout.

Roll out the pastry dough and line a 9″ pie pan with the bottom crust. Pour in apple mixture and even out the top with a spatula. Cut the remaining 2 tablespoons of butter into thin slices and place evenly on top of the apples. Top with the top crust (decorated/cut out in whatever manner you please, but making sure to poke some holes in the top to let air out). Crimp edges however you please. Brush with the egg wash/milk/cream and sprinkle with some sugar. Bake pie in a preheated 375 degree oven for about 30 minutes. Let cool about 20 minutes or more before serving for best results.

Cost Calculator
(for one pie)

Eight brownie points: It’s true, when cooking for crowds (and especially for judges) I throw health concerns out the window. This pie is a monster of calories from saturated fat, no doubt. And it will eat you, if you don’t eat it first.

Six maple leaves: Great luck that this cook-off was on a Sunday, which meant that I could get super-fresh ingredients from the Greenmarket on Saturday. The apples, though bruised in some places they were, were crisp and really fresh — also thanks to the beginning of the harvest season. The sage was picked up there as well. I could have gone for butter, but at Fairway one day I decided to pick up some high-fat, unsalted European-style butter from, well, Europe. I’m sure there’s a less fossil fuel-burning option that’s similar out there.