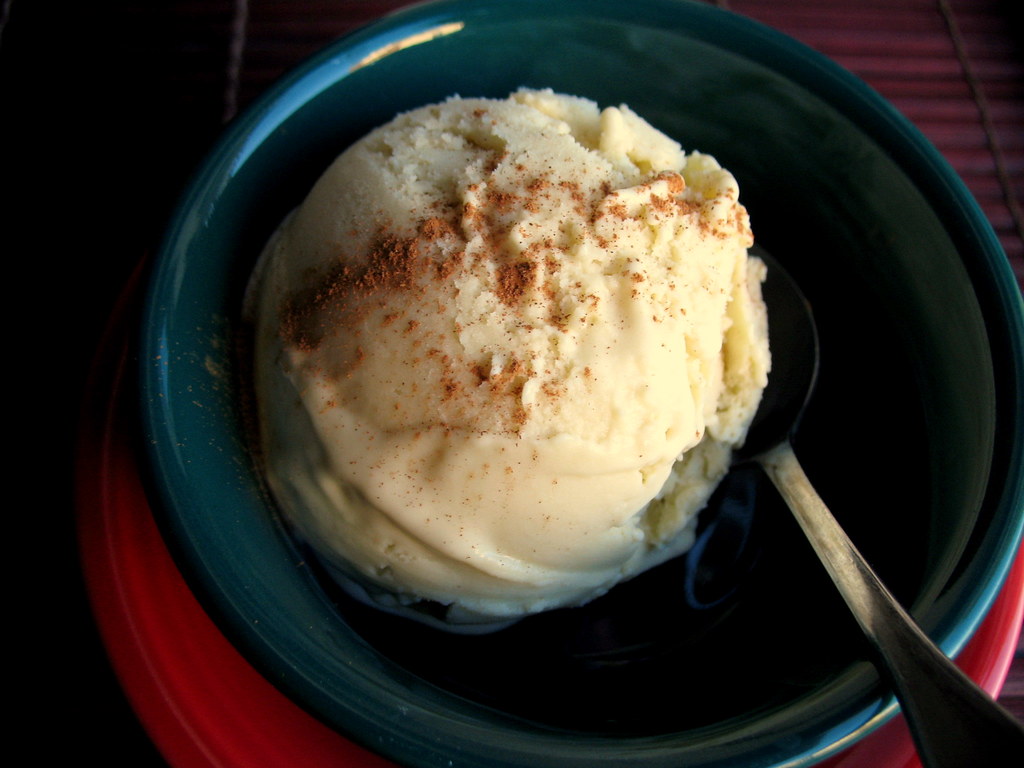 There are many things that have confused me about chai over the years. How did the simple word for tea in India (and much of the world) come to denote this Christmasy spice-infused drink? Isn’t it then redundant to say “chai tea”? Does it always need to be sweet (I never sweeten my teas)? What are the spices in it and is there a rigid formula of them? Should the “C” be capitalized? Why did the New York coffee shop I worked at between college semesters always purchase it pre-brewed in cartons (couldn’t we be trusted to brew it like the rest of the loose-leaf blends?)? Why is it so damn special?


That’s a lot of confusion for not a whole lot of years that the beverage has been under my radar. According to this brief history, it wasn’t until the 1980s that non-Indian restaurants and coffee shops in the West began serving chai, spurred by an interest in yoga, and Eastern cultures in general — and in my personal observation, I don’t think the word or drink fazed me until the late nineties. By then, the teabag companies had swarmed in on the trend. Celestial Seasonings now makes six different varieties of chai teabags.

That the now-popular drink has quickly transformed the Hindi word for tea into a household and coffeehouse term I see as a microcosm of a bigger, and more enduring effort from US tea marketing campaigns to exploit tea’s Eastern origins. [I went on a little rant a year ago about Celestial Seasonings’ Mandarin Orange Spice girl and the box’s corny prose. But I think the company’s recent product redesign has toned down this angle — less of the fire-breathing dragons, Confucius-like sages, and names for tea blends that sounded suggestive of altered states of mind do we see.] Probably the most puzzling part of the case of chai then, to me, is that it tastes wholly American, just like the spices you might put in a pumpkin pie.

To address my first order of confusion above, it made much sense when I discovered that a popular black tea blended with warm spices called Masala chai (or Masala “tea”) had gradually been shortened to just “chai.” Often served with milk, hot and sweetened, it’s as popular in Bombay as coffee is in New York. Naturally, it tastes a bit different there from the chai lattes you’ll find in the States, according to a friend of mine who lived in India for some time. Which brings me to my next, unsolved question — it seems there is no rigid formula for the spice blend. Across the Western world, people are routing for the additions of everything from fresh ginger to bay leaves in chai recipes. The popular Starbucks brand Tazo includes vanilla and rooibus in their chai blends. And my coffee shop was not alone; according to Wikipedia, most shops make chai from brand-name liquid concentrates instead of brewing their own tea fresh, for reasons of convenience that I still don’t, not by a long shot, understand. (Isn’t that a huge expense not to mention enormous waste of packaging for something you could figure out how to blend and brew on site?) Getting to the grammar-related questions last, it is redundant to say “chai tea,” though this term is ubiquitous; and I don’t know — sometimes the “C” is given proper noun cred, sometimes it isn’t. 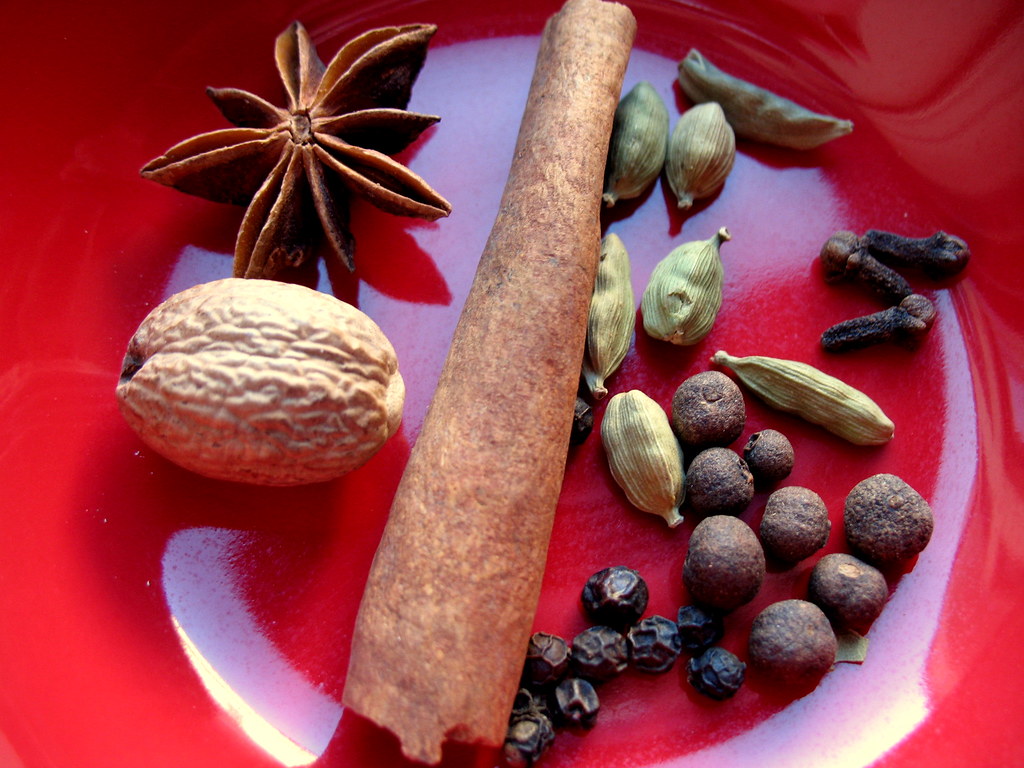 If you can take in all that backstory, confusion and frustration over this type of tea (which I hope wasn’t too much of a bore), then you can probably read into it that I was determined to make something out of the stuff. Yes, I have enjoyed a cup of warm, sweet chai every once in a blue moon, but I was never so taken by it to figure out just how to make it myself at home. That is, until I came up with the idea of making an ice cream flavor with it, at home. It just seemed the right flavors for fall. Plus, all my friends adore chai, and I aim to please.

The first order of business was deciphering that magic blend. I’ll allow that anything might be allowed in chai spices around here, but I needed to read up on recipes to find ideas. Once I’d gathered that most recipes for the tea called for at least cinnamon, cardamom pods, whole black pepper and cloves, I amassed these basics (thanks for the cardamom, Winnie) and picked and chose the accoutrements. I had star anise lying around, so why not? I also had whole allspice, and whole nutmeg. Good enough.

Darjeeling tea seemed appropriately Indian for the black tea I steeped in the milk and cream mixture, along with a teaball of the above spices. When it was all said and done, steeped and sweetened, cooked to custard, churned to ice cream, set frozen, and scooped into a bowl, it tasted more or less like the creamy coffeehouse iced chai latte. In one confoundingly delicious little ball.

In a small bowl, beat the egg yolks with the sugars and spices until fluffy and the lighter in color. Set aside.

Combine the milk, cream and spices in a medium saucepan (using a teaball for the spices for easier removal later on). Drop in the tea bags, and bring mixture just to a boil, then reduce heat to very low. Let simmer, stirring occasionally, for 25 minutes. (Do not let boil.)

Let custard cool completely, then remove the teabags and all the spices with a slotted spoon. Transfer to an airtight container and completely chill in the refrigerator at least 2 hours. Follow your machine’s instructions for churning length. Add the chopped nuts in the last minute of the churning process. Transfer ice cream to an airtight container and freeze for 2 hours to “ripen.”

Eight brownie points: It’s just straight-up, good old-fashioned ice cream, folks. Rich and fatty, eggy and creamy, and with relatively little else in the way (compared to most of my ice cream flavors).

Four maple leaves: The inconvenient truth about dry spices is that they’re mostly imported. Almost all black peppercorns are harvested in Indonesia before appearing on every American household table, restaurant kitchen, and about 99% of recipe ingredient lists. So it’s this weird hush-hush zone when it comes to eating locally. The handful of spices used in this recipe really are that exotic, literally and figuratively. Aside from that and the white sugar, the cream, milk and eggs are do-good Greenmarket buys.