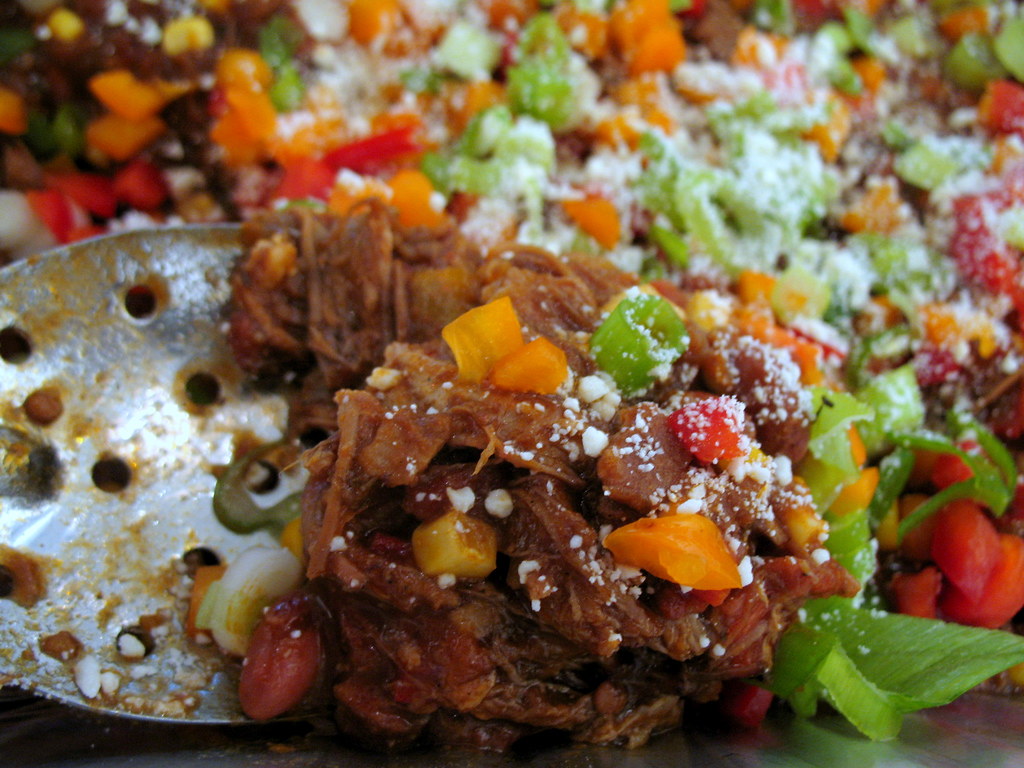 As with my other attempts at Chili Takedown championship, this was a very time-consuming process. In keeping with tradition, it also did not succeed in receiving first-place honors. However, this was no ordinary chili cook-off; I was competing against four other veteran Takedown contestants, hand-selected by our ringleader, Matt Timms. The bar was high, and the secret ingredient, à la Iron Chef-speak, was heat. At least, that’s how I would describe my approach to this chili. You see, our special venue for the battle was the Brooklyn Botanical Garden’s Chile Pepper Fiesta — an annual, all-day celebration of the fiery capsicum featuring tasty demos, workshops, and a live performance by none other than Pete Seeger (now get the recipe name?). 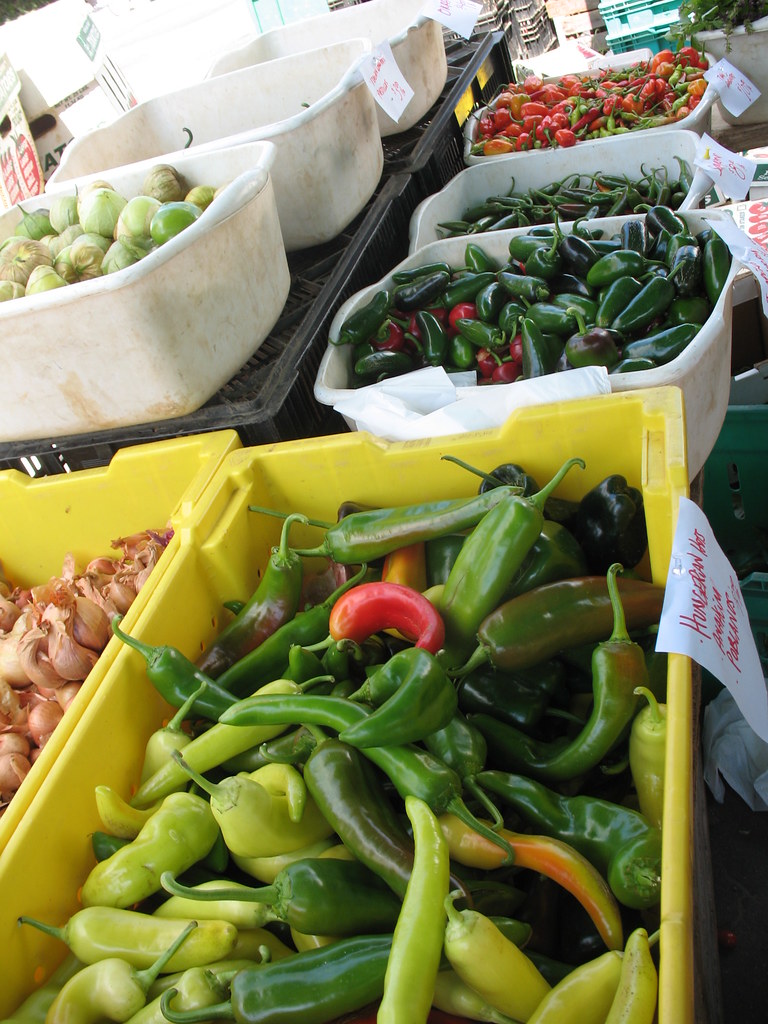 piles of peppers at the Grand Army Plaza Greenmarket

There would be no formal judges this time, either — just regular folks attending the festival who dropped by our table to sample and vote for their favorite chili. To excite both hardcore chile pepper fanatics and fans of Pete Seeger, I was determined to bring a plethora of peppers together into one big, happy pot of chili. Oh, I had peppers alright, no “if”‘s about it. I went to the Greenmarket the week before and loaded up on family-sized bags each of red bell peppers and small, sweet orange peppers. I grabbed colorful Anaheims, poblanos, serranos and a token Hungarian Hot. (I turned my nose up at the common jalapeno; a veritable Chile Pepper Fiesta called for a little more creativity than that.)

Once home, I added to this cache some deep burgundy anchos (aka dried poblanos), my favorite dried pepper for steeping in hot water then pureeing into a flavorful paste. I also threw into the mix a can of chipotle peppers (aka smoked jalapenos) in adobo sauce. I wanted to represent chile peppers in a variety of states: freshly chopped for garnish, dried and reconstituted, smoked and pulverized, or cooked well into the delicious sauce. 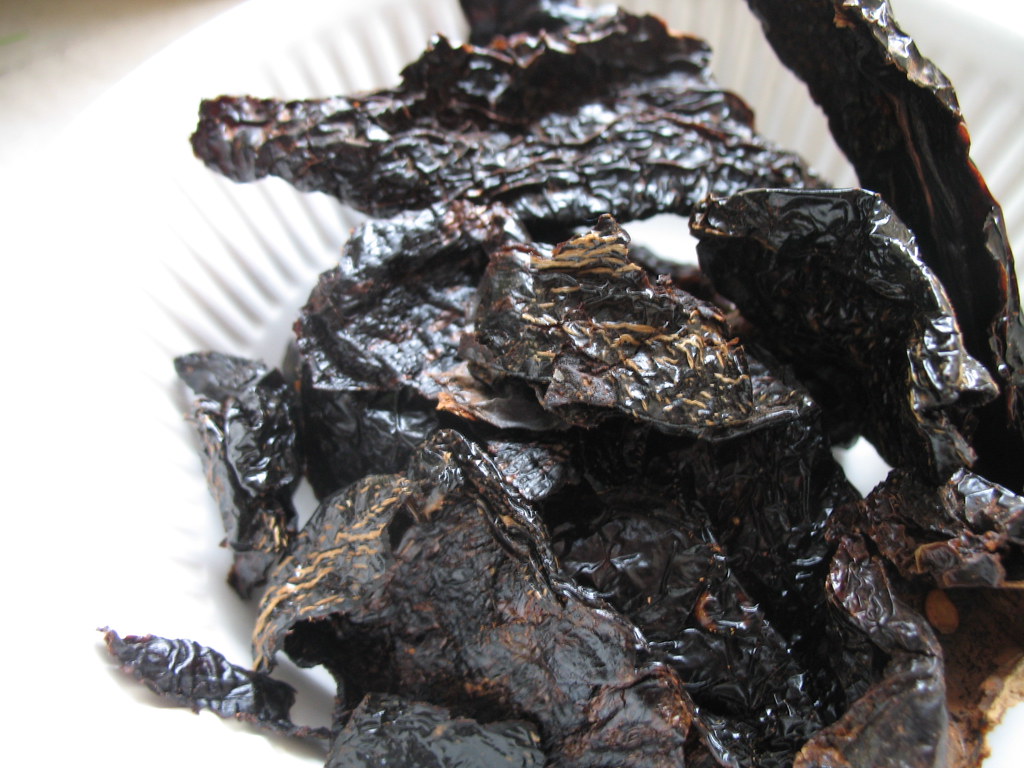 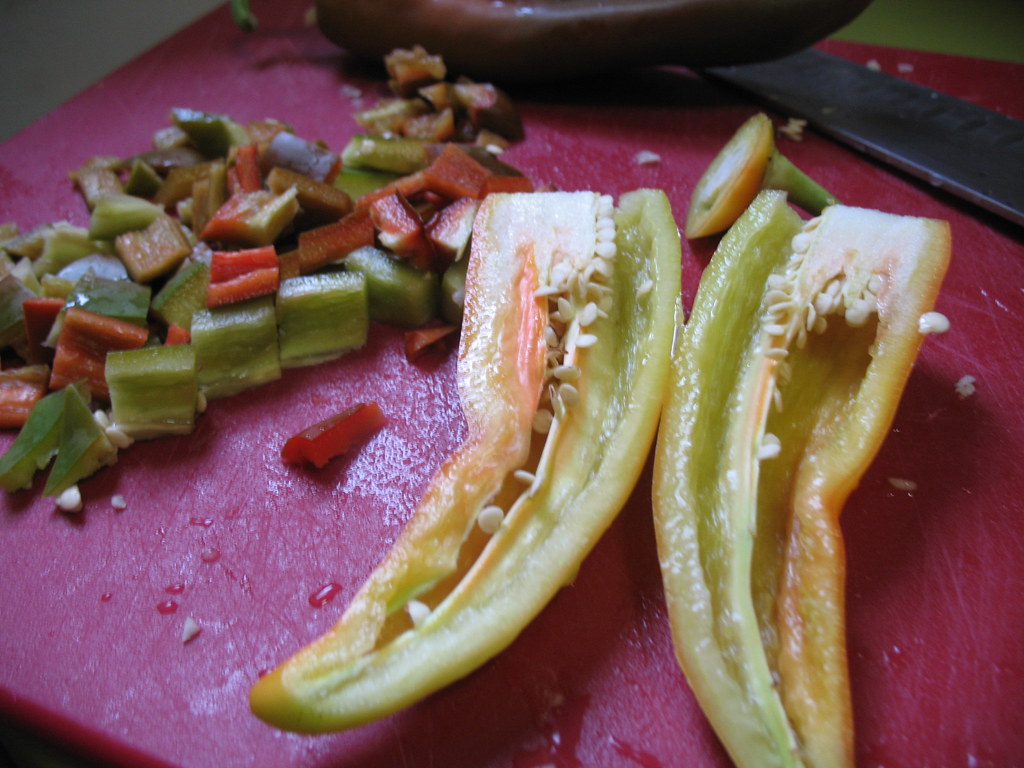 Then there was the meat. I’d had a big piece of pork shoulder from Tom Mylan‘s butchering class sitting in a simple salt-sugar brine for the better part of the week. I’ll admit that pork shoulder wouldn’t necessarily be my go-to cut for an audience-pleasing chili. Most people find beef a signature of the dish. But, as I mentioned, I had eight or so pounds of prime, heritage-breed, pasture-raised pork at my disposal, and I wanted to share it with as many people as possible.

Once removed from the brine, I patted the pork shoulder dry and brought it to room temperature for a couple hours. The browning and six-hour braising process that followed this is too tedious to recollect here, but you can certainly read the recipe for a full disclosure. Despite the work involved, I was so pleased with the results that I used the same technique, and the rest of my butchering-class Berkshire pork, a few days later to make spicy pork tacos at a friend’s party. 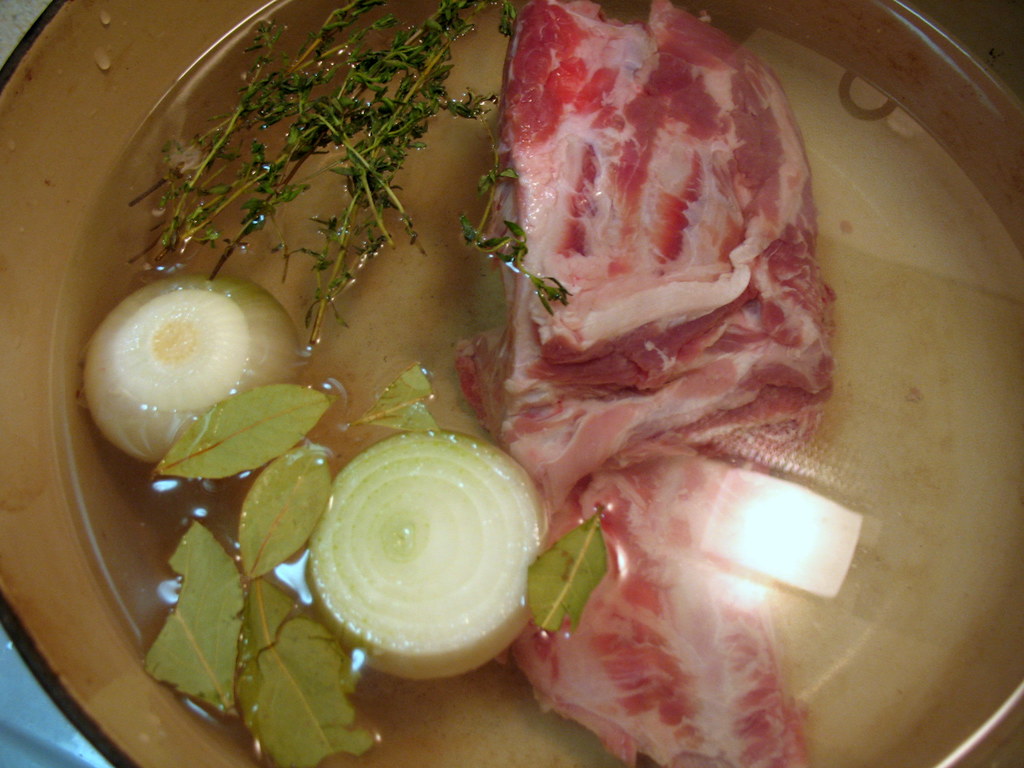 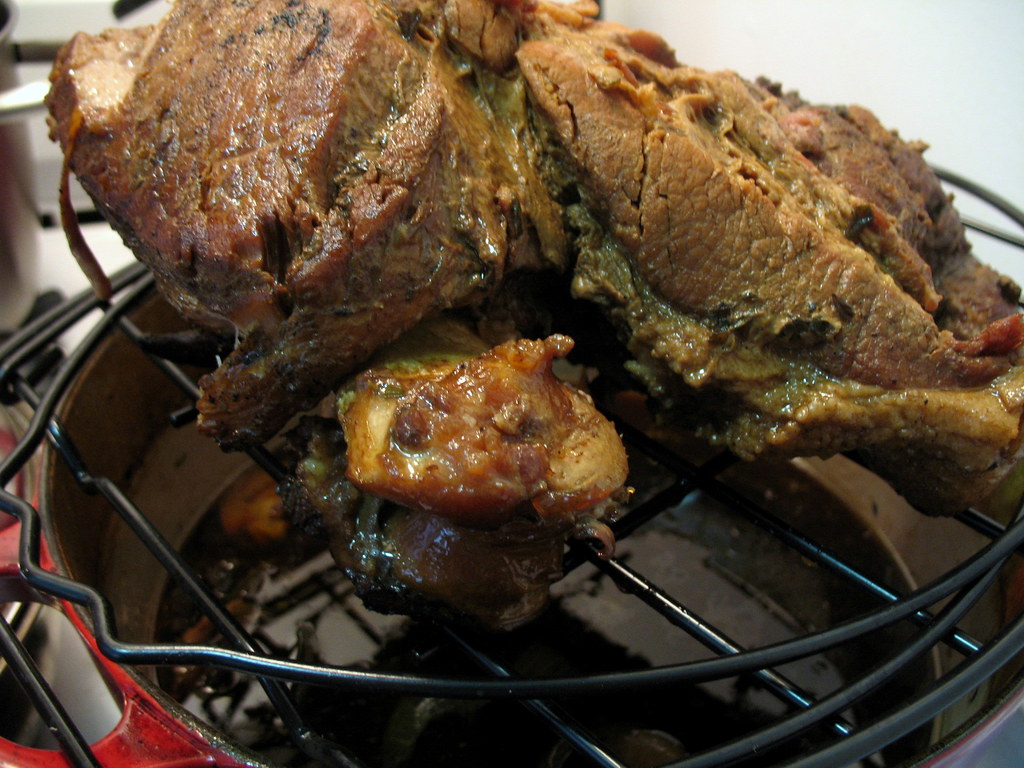 after hours of braising, the pork is elevated and roasted 15 minutes more (for a crisp surface)


Once the meat was pulled and picked over for excess fat, I stirred it into a tomato and pepper sauce that had already been bubbling away for hours. The pot that the pork had been braising in had a lot of good stuff, too: here’s where the dried and de-seeded anchos had disintegrated into reddish-brown mush, a few onions had melted, and a cup of strong coffee had turned the whole mixture a rich brown hue. I broke out my hand blender and gave it a good mashing-up. Once the pureed braising liquid had been combined with the tomato sauce, a small portion of pinto beans, and all that pulled pork, there was so much shredded meat per spoonful of the stuff that barely anything else could be detected. 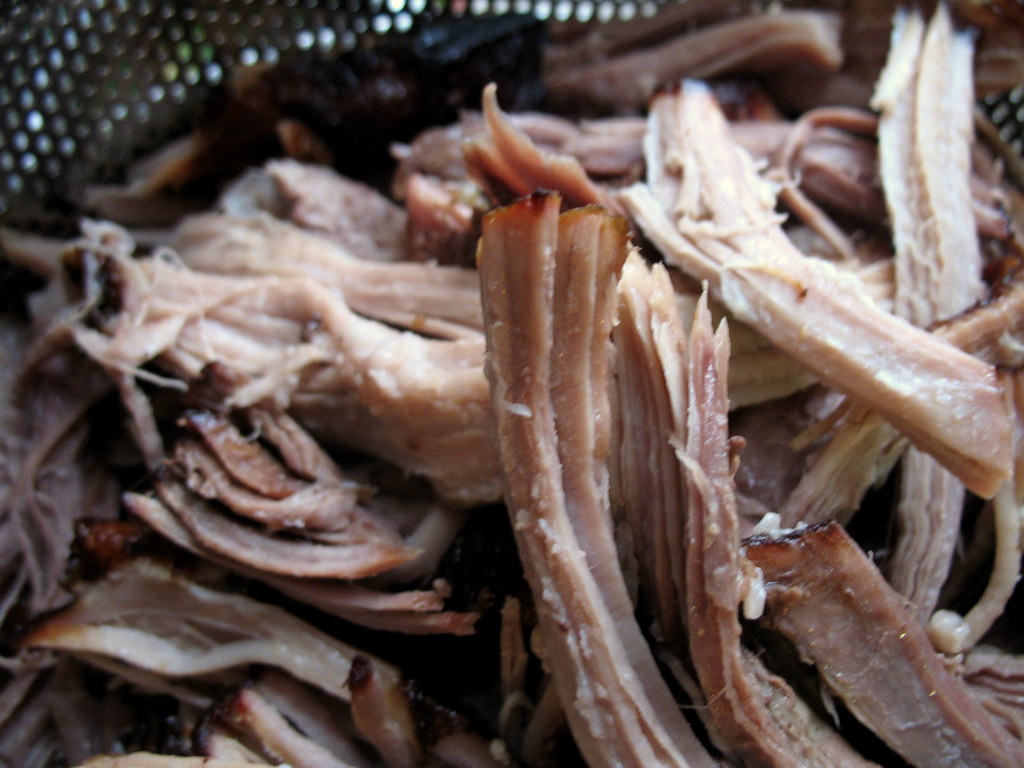 I went with Plan B, and frantically cooked down an extra can of whole tomatoes. I also added a can of pumpkin puree — a not-so-secret chili addition I’ve used in the past for texture and a bit of sweetness to balance out all that heat. Oh, and fresh corn — I ran to the store to buy a few ears and zipped the kernels right off into the pot. Now, the chili was looking and tasting about right.

When I got to the Chile Pepper Fiesta and unloaded my concoction into a chafing dish, I was surprised to find I was the only contestant of the five who’d brought along fresh garnish. At the most recent Chili Takedowns, garnish like sour cream and cilantro were all the rage. For my part, I topped my chili with a confetti-like mixture of finely chopped orange and red peppers, scallions and cotija cheese. On presentation, you could fault me not.

However, I did manage to break one of my very own cardinal rules of cook-offs: I ran out of my batch faster than anyone else. By the last twenty minutes of the tasting session, my tray had gone bottoms-up. Many folks didn’t get to taste my chili; hence couldn’t give it their vote. Alas. 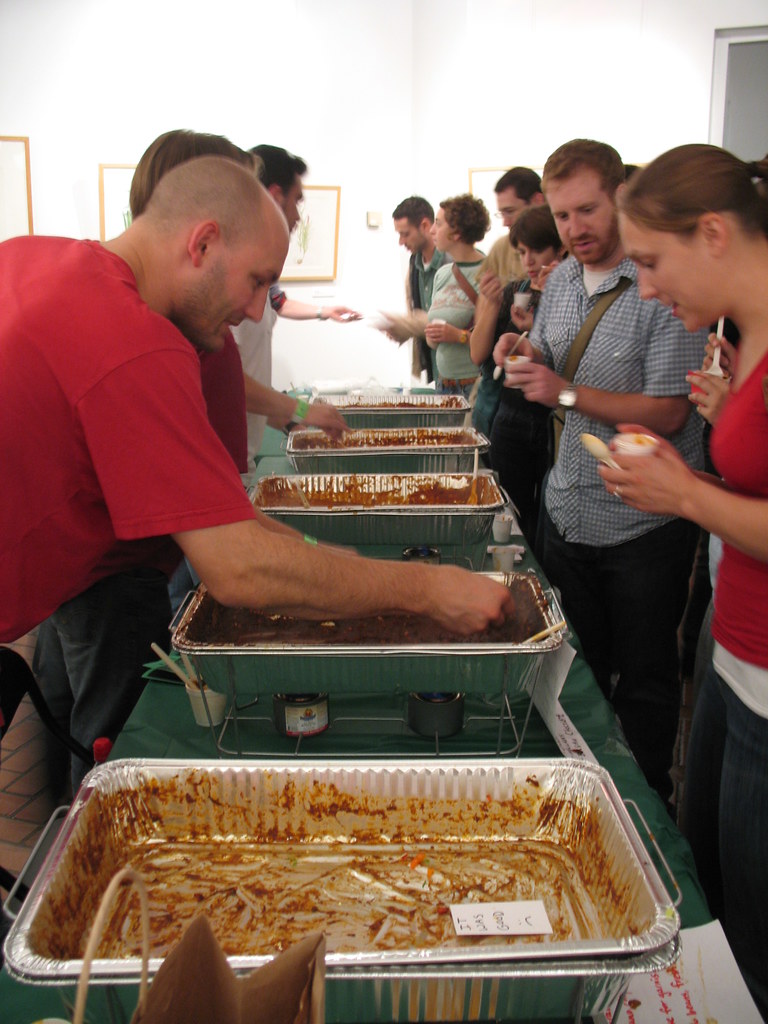 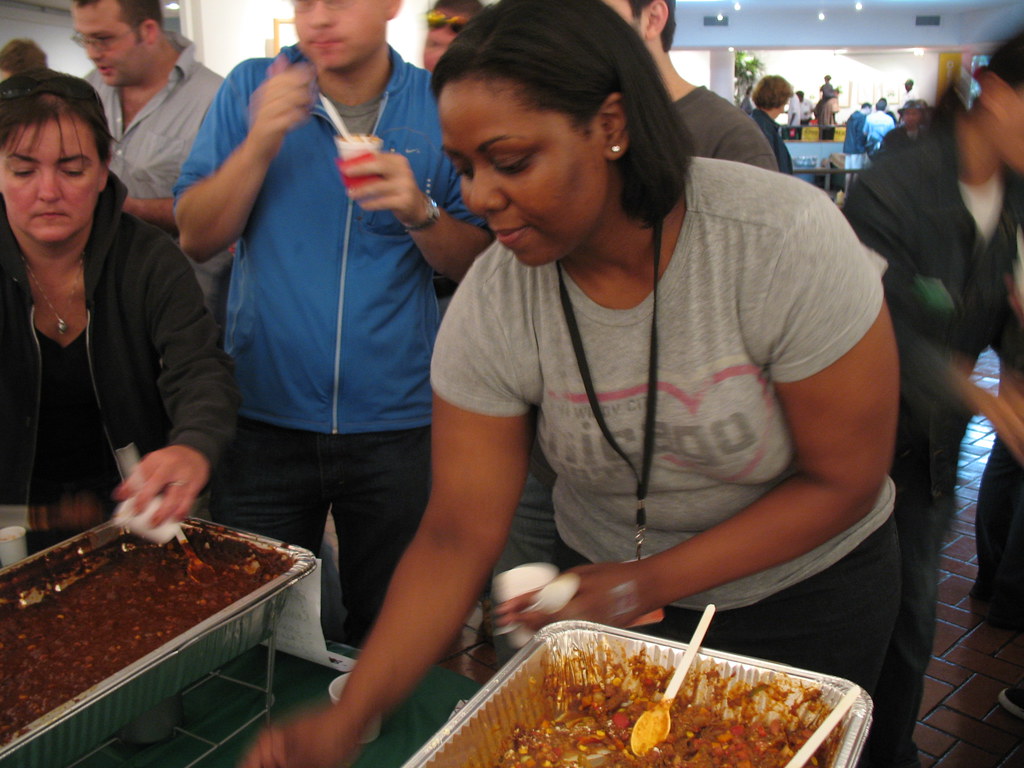 and the festival-goers eat it up

I wound up in third place when it came time to announce the winners, not such a bad rap for a pork chili that ran out. Hats off to the winner, a two-time Chili Takedown champion Steve Cash, and runner-up Monte Isom for their own unique takes on chili. Over the course of the two or so hours we spent serving the crowds and stealing spoonfuls for ourselves, we’d all had a good enough time to become Facebook friends, rather than sworn chili enemies. And, as I wandered around the festival the rest of the day, many people came up to me to shake my hand and tell me how much they liked my chili. Nice crowd. 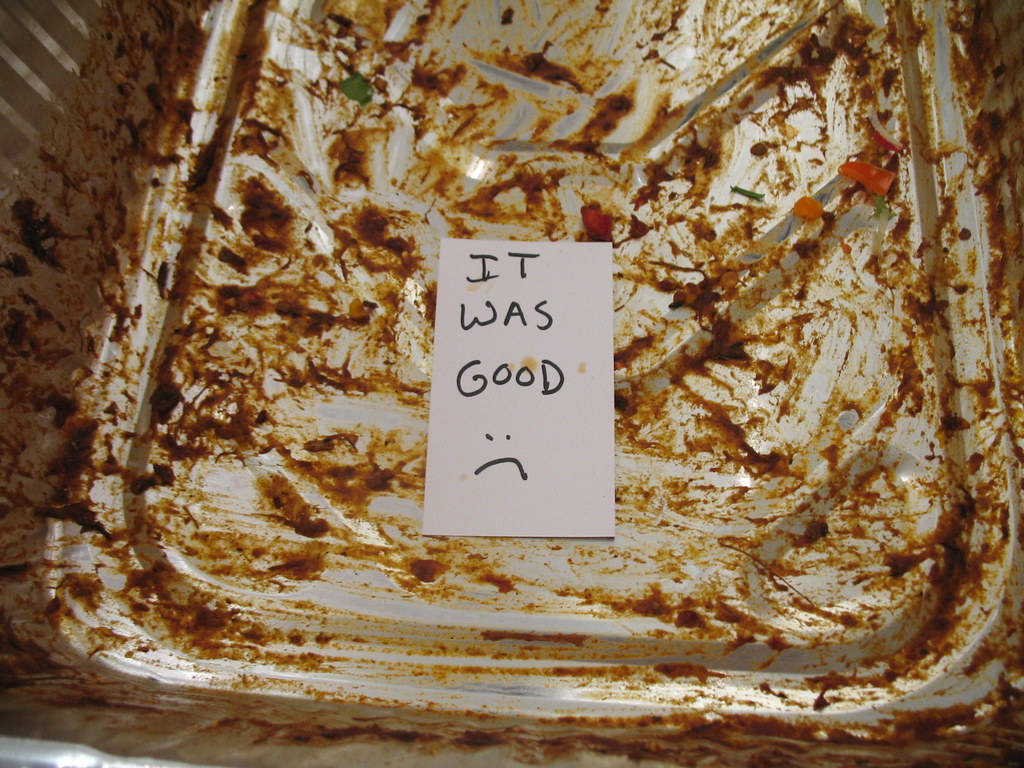 Finally, to bring the Chile Fiesta — and my chili fiascos — to a close, I got to watch Pete Seeger sing alongside his grandson, Tao Seeger-Rodriguez and the guitarist Guy Davis under a tented area in the botanical garden’s vast field. It had drizzled the whole day, and the grass was sodden with loose, well-trampled-on dirt. Still, the tent was packed with people camped out on tarps, and I could squeeze just close enough beneath the tent to see a clear view of the stage. I didn’t hear “If I Had a Hammer” — maybe I’d missed it — but for an encore performance, the threesome came back onstage to perform “Guantanamera”” to an overjoyed crowd of Brooklynites, traveling chile adorers, scampering children and seniors in wheelchairs alike. Made it all so very worthwhile. 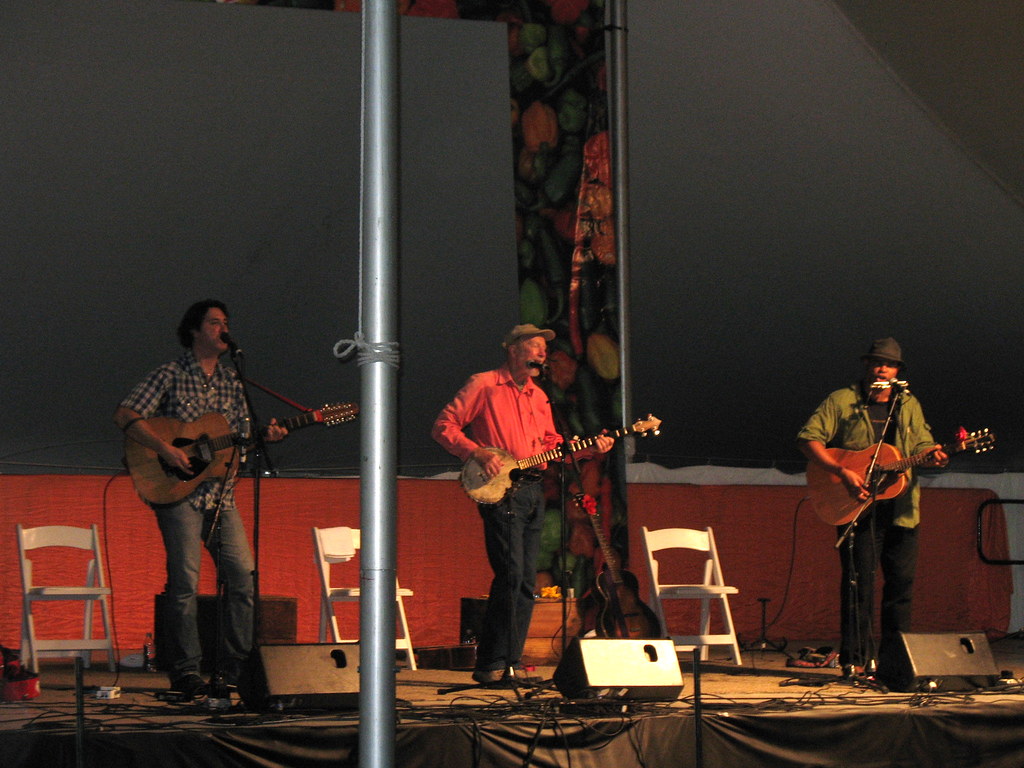 Optional: Brine the shoulder in a solution of one half-cup each of salt and sugar and enough water to cover for up to 3 days, refrigerated.

In a large, heavy-bottomed pot or Dutch oven, heat a few tablespoons of vegetable oil on high for 2 minutes. Pat down pork shoulder until very dry and place down in pan. Let cook on each side about 2 minutes, until most of the surface has been lightly browned. Remove from heat. Scrape up bottom of pot and deglaze with pork stock. Place the pork shoulder back in, and add the two halved onions, half a head of garlic cloves, Mexican oregano, coffee, and enough stock to just nearly cover the meat. Line the top of the pork shoulder with the bacon strips. Cook in 350 degree oven for at least 4 hours.

Meanwhile, in a separate large, heavy-bottomed pot, cooked the chopped onions and peppers in oil over medium heat until softened, about 6 minutes. Transfer the canned tomatoes and their juice to a large bowl and squeeze the tomatoes by hand until roughly mashed. Add tomatoes to the peppers and onions. Add the minced garlic and a few pinches each of salt and pepper. Bring to a boil, then reduce heat to a simmer and cook, covered, about 1 hour, stirring occasionally.

When the pork has been braising for at least 4 hours and is soft and tender, remove from the oven. Transfer the shoulder temporarily to a dish. Place a roasting rack on top of the pot and put the shoulder on it. (This is to roast the meat and catch any juices that drip from it in the same pot as the rest of the braising liquid. If you don’t have a rack that fits on top of your pot, or if the combination is too tall to fit in your oven, then just place the pork in a separate roasting tray instead. Transfer any juices to the rest of the braising liquid after roasting.) Roast the pork on the rack for 15 minutes at the same temperature. Remove from oven and let sit until cool enough to handle.

Meanwhile, blend the braising liquid with a hand blender, or by transferring carefully into a blender or food processor until mixture is smooth. Add mixture to the tomato sauce. Add the pumpkin, blended chipotles, pinto beans and spices.

Pull the pork into half-inch-thick or so shreds. Add the pulled pork to the rest of the chili mixture. Stir until thoroughly distributed. Taste for seasoning, adding more spices, salt and pepper as desired. Finally, add the fresh corn and cook another 5 minutes. Serve, along with the fresh chopped peppers, scallions and cotija cheese for garnish.

[Note: If my calculations are anywhere near correct, then it’s pretty amazing the Brooklyn Botanical Gardens decided to give each chili contestant a stipend of $50 to cover ingredients! Spot-on!]


Seven brownie points: So, my hope here with giving this rating and not, say, eight or nine points, is that you will be so sated with bright, spicy and strong flavors, fresh textures and rich porkfat that you won’t need to eat more than a small serving of it. This would be a good result, because there’s plenty of veggie vitamins and protein to fuel a growing child. Overdose, and you just might, because it is that delicious, and you’ve gone the way of the cholesterolly careless. But then, don’t we all sometimes?

Seven maple leaves: There are plenty of places these days — especially if you live in a big city — to get humanely raised pork. Go to your farmer’s market stands to find a cut, or to place an order, or wait until Fleisher’s Meats starts delivering to homes next month. As mentioned in my pig butchering post, the meat produced from free-grazing, grass-fed animals really blows away the industrial competition in flavor, and as for ethical/environmental issues, it’s another game entirely.