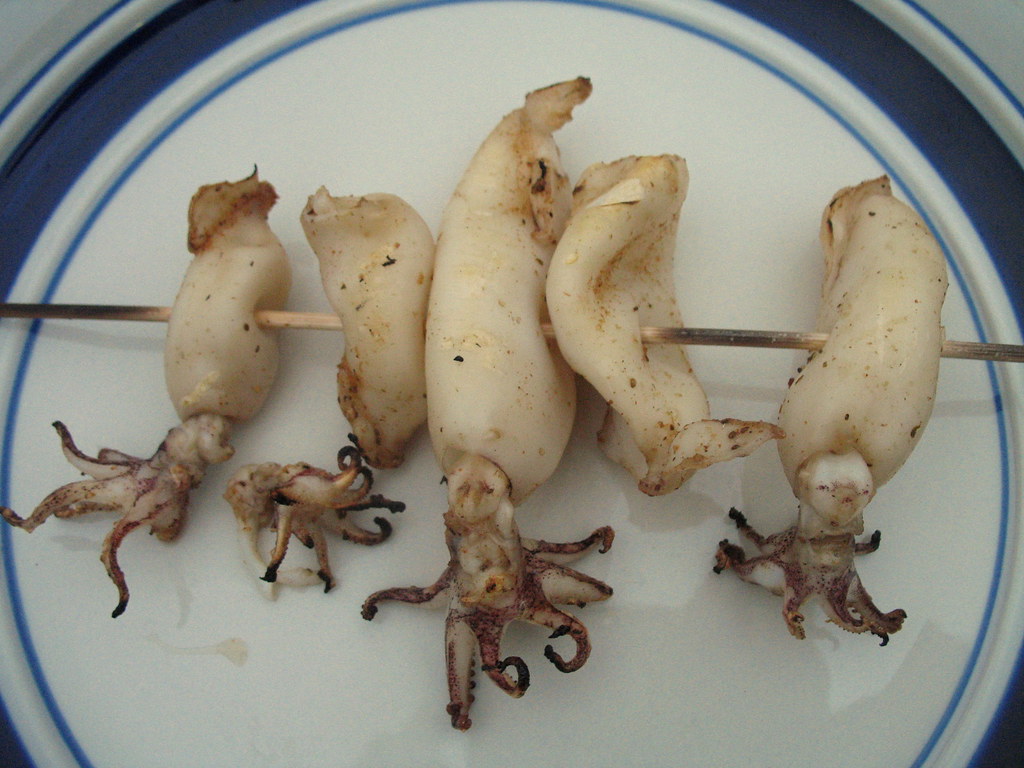 Squiwers? Skewidders? Sigh — this dish is not the most beautiful-sounding word combination in the English language, and I guess it’s just going to stay that way. As for its appearance, it’s up to you how beautiful they look. If you ask me, that succulent tangle of tentacles, cooked to just a slight crisp at the curlicue tippy tips, kind of makes me swoon. 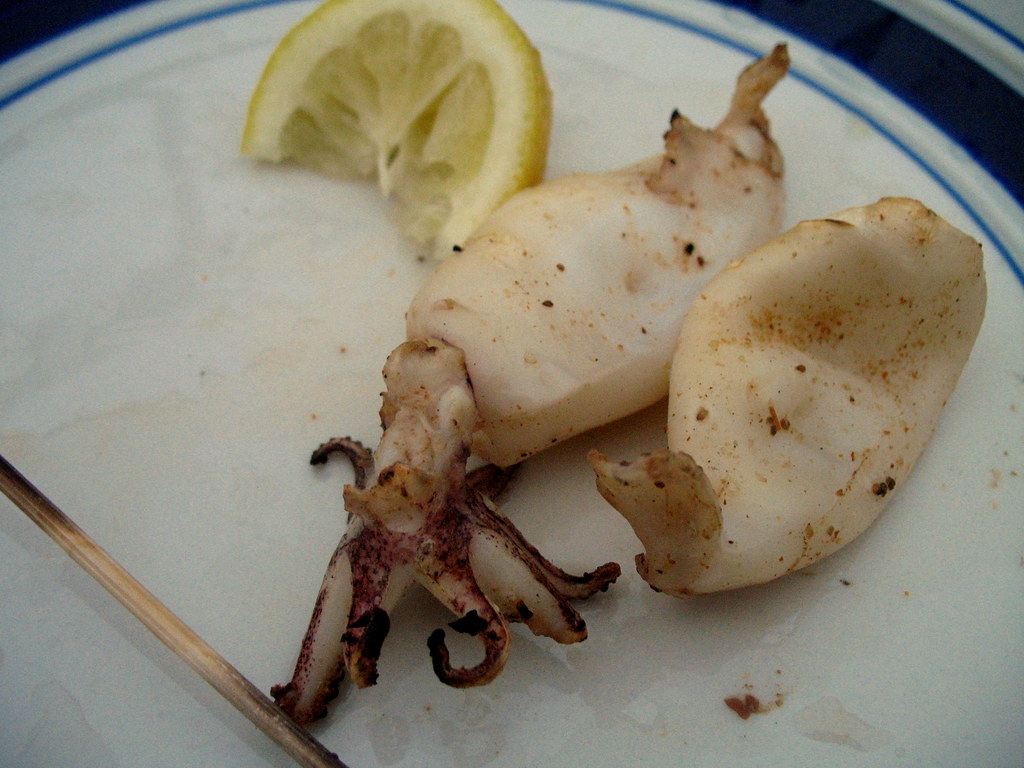 Weekend weather has not been too kind to barbecues lately in New York, but friends and I still managed to get up on the rooftop for a slightly drizzly grillfest a couple Saturdays ago to celebrate birthdays, and (supposedly) the start of summer. As many of you probably also practice at barbecues, guests were invited to bring any and every marinated, prepared, or completely raw and untouched ingredient they so desired to throw onto the grill. The skewering station at this one included all shades of meat, veggies and fruits, making dinner a choose-your-own-adventure of sorts, on a stick. Of course, this kind of liberty demanded some unlikely invitees, so I went into Chinatown that day, braved the stench of the slimy streets where the fish markets are in the middle of a hot afternoon, and picked out a bag of bay scallops and these little squids. They just looked about the right size to be on a stick. 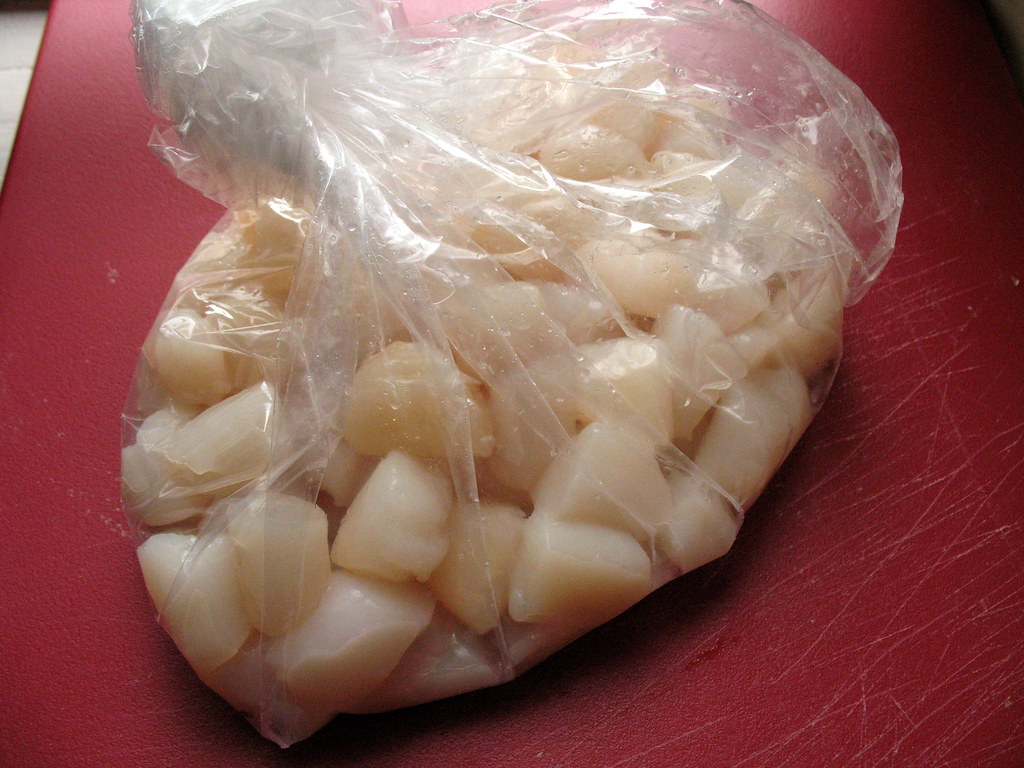 I think that fresh seafood wears simplicity best. All you really need for the squid is a hint of salt and pepper before cooking and a squeeze of fresh lemon once it’s hot off the grill to see unfairly rewarding results. But I enjoy Old Bay seasoning on seafood, too, so I dusted the raw squid with this and a little oil to help prevent it from sticking to the grill. 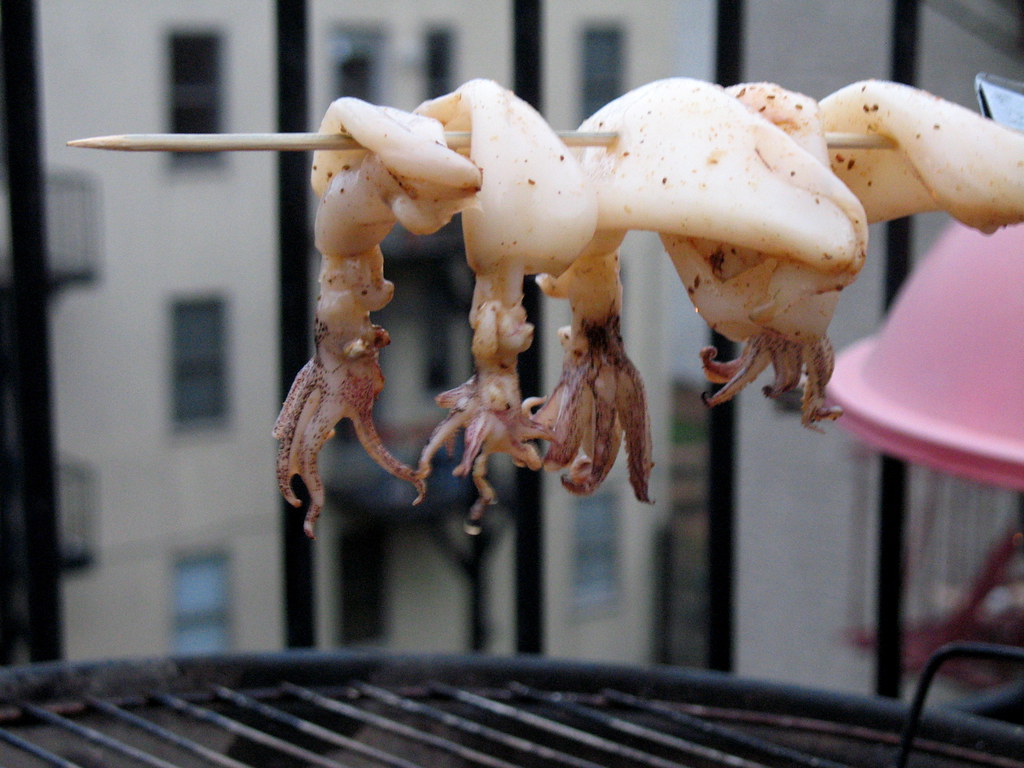 yes, they dangled into the coals if you weren’t careful 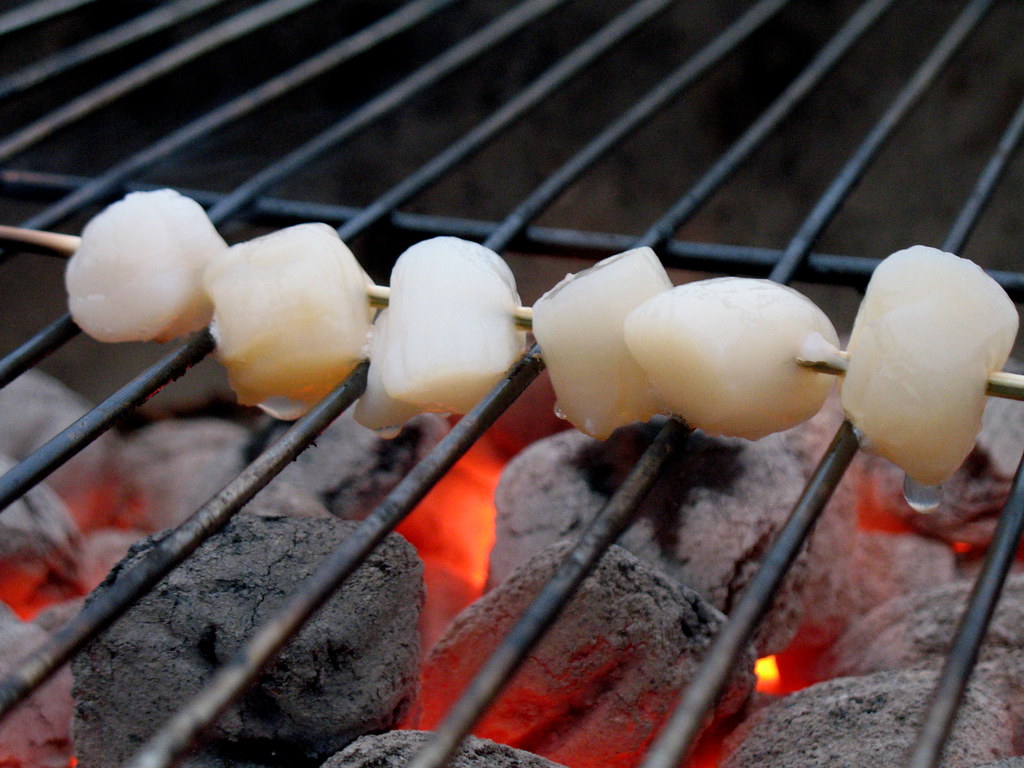 bay scallops (not marshmallows) get fired up

The squid was prepared really as an afterthought. I thought the star of the barbecue was going to be the bay scallop skewers. I made a garlicky, lemony aioli to dip the unseasoned, grilled skewers of these in, which looked a little bit like pearls on a stick.

Taste-wise, this creation was good, but not the most practical thing to make, since the scallops’ meat didn’t hold to the stick. If you tried to lift the skewer and turn it over, the scallops would just bob about and end up on the same side they were previously on, and if you didn’t puncture them dead-on in the center, they might fall off altogether. (It called for painstaking use of tongs.) But they did char nicely on the grill. I don’t know. It was just a little too delicate of a process for my taste. When I think of grilling kabobs or skewers, I think of hearty hunks of meat on an easy-to-access stick. Now I’ll add squid to that group. Only they look more like little ghosts. 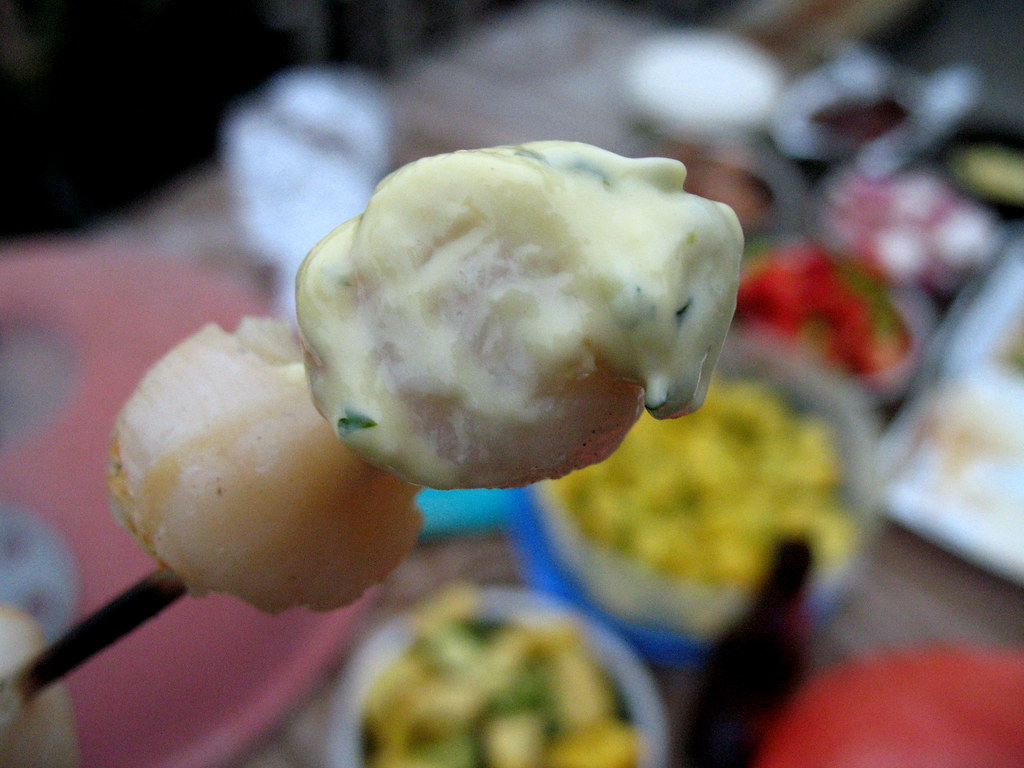 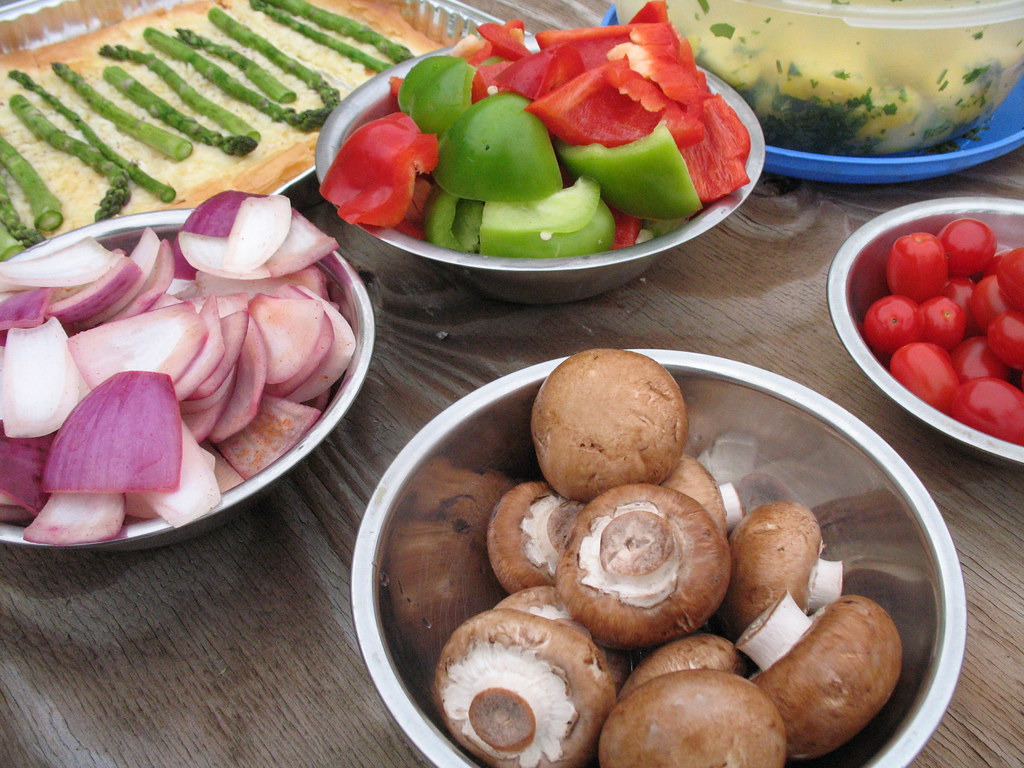 of course, we had plenty of normal things to grill as well 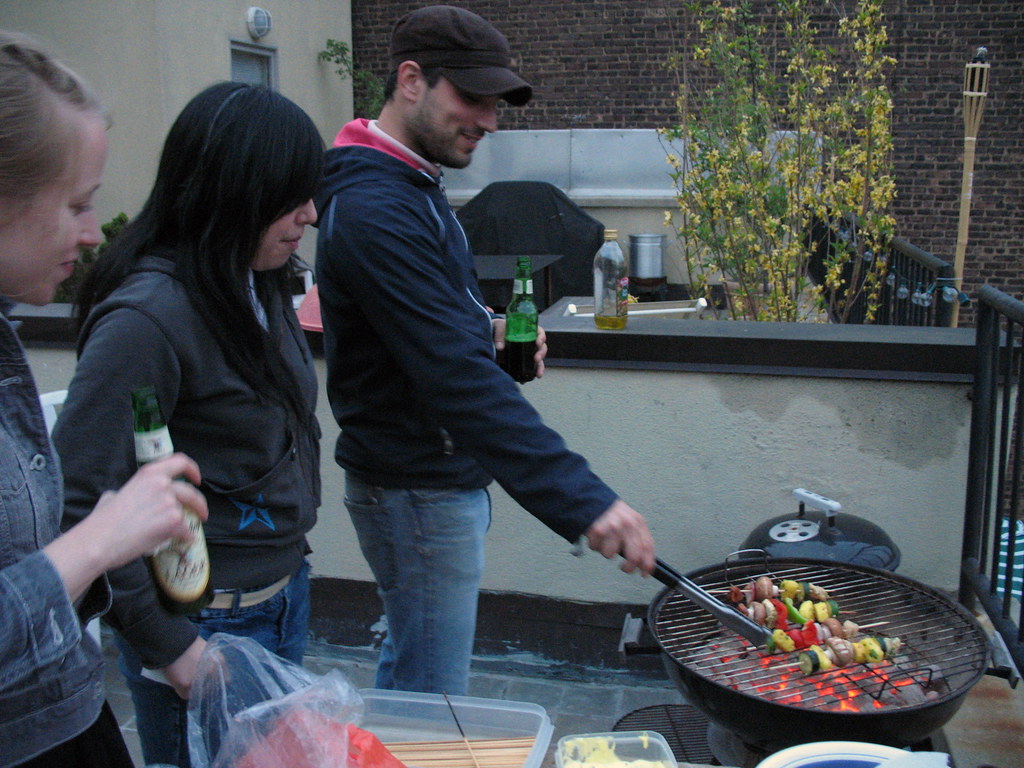 all eyes on the food

In case you’re wondering why I’ve been sitting on this squid report for a couple of weeks by now, it’s because squid was a slippery topic in terms of “green” relevancy, and I still don’t have all the answers. For one thing, I’m not sure where the squid I purchased in Chinatown was caught — close to home, or halfway across the world? (If it were close to home, this would be the right season for it.) I found this 2002 study of the New York commercial fishing industry, which indicates that squid was the biggest catch of all seafood species that year, making up 29% of the total catch. But of the top ten species in value, squid took only 13% of the wheel, behind more popular seafood like clams and lobsters. Could this mean that consumer demand for squid is not so hot in these parts, despite their abundance? It made me think of the articles I’ve read about the new book by Taras Grescoe, Bottomfeeder: How to Eat Ethically in a World of Vanishing Seafood, which posits that if we were only more fond of eating less popular seafood, or seafood closer to the bottom of the food chain in particular, we wouldn’t be endangering so many overfished species. Of course, I then contemplated squid’s place in the underwater food chain, finding that it comes down a great deal to their size. All these inter-connected ecological issues got me in a good tizzy. (And that’s not even getting into the bay scallops.)

That’s why I love this handy Seafood Selector at the Environmental Defense Fund website, which tells me that squid falls into their “Eco-OK” group of seafood, and bay scallops are on the “Eco-Best” list. Blue Ocean Institute also has “Guide to Friendly Seafood” that provides an elaborate scoring system for each species. So the eco experts have spoken, and have given squid a pretty good score. I’ll probably move onto grilling more veggies and healthy fruits this summer despite it, but for now, I’m glad that I got something to chew on.

Grilled Baby Squid Skewers
Note: I purchased my squid already cleaned. See here for cleaning and purchasing tips. It’s also good to give the squid a good rinse and check for any extraneous bits or to remove the thin, plasticky cartilage if any remain.

Marinate the cleaned, rinsed and dried squid with the Old Bay and oil — can be done and used immediately, or refrigerated for up to 2 hours (as all fresh seafood should be used simply right away).

Soak wooden skewers, if using, for at least one hour beforehand (or else they will char as in the photo at top). Line up 5 or so similarly sized squids on each skewer, with an inch or so of space in between. Place directly onto a hot, flaming grill. Cook about 1 minute per side (depending on size of the squid), flipping once. Remove from grill and let squid cool slightly before sliding off the skewer. Serve with lemon wedges.

Five brownie points: As an appetizer, or a side course, you can’t really go wrong with a few pieces of grilled squid dressed only with fresh lemon. But you can eat too much cholesterol-rich seafood like squid, shrimp and shellfish. The pros that help balance the high cholesterol levels in this seafood are their omega-3 and omega-6 fatty acids, which Americans notoriously do not eat enough of.

Four maple leaves: As discussed above, if missing some pieces to the puzzle. Next time I’ll try to skip the stank downtown markets and see what the fishmongers are selling at the Greenmarkets.