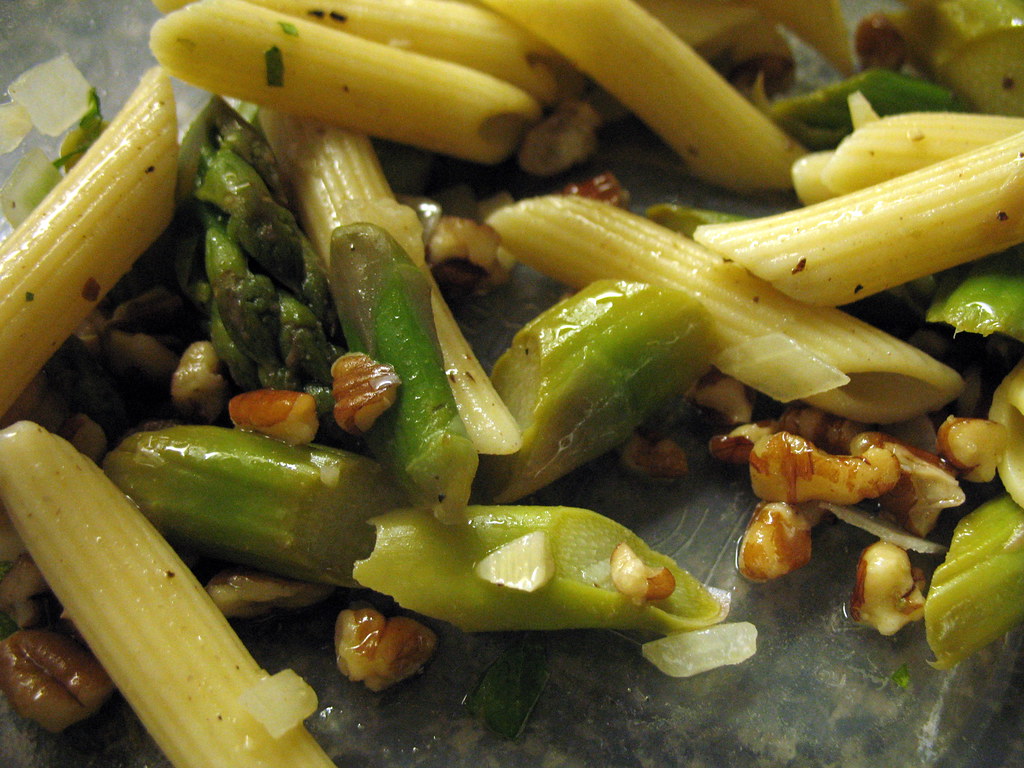 This is either a very boring fact or a semi-interesting cooking tip, and if you grew up eating lots of Chinese food like me, you probably already know it even if it’s never been said aloud, but foods that share a similar shape and size go together. They just do. So if you’re cutting up chicken to go with green beans, you do long, thin strips. If you have something like fava beans and you’re cooking it with firm tofu, you’ll want to pare the tofu block down to small cubes. It’s not an ultimatum or anything beyond a little conventional wisdom, because things tend to cook more closely in speed if similarly sized. And your mouthfeel sensors will thank you, for giving it greater harmony.


Slender, late-spring asparagus cut to diagonal-edged logs and penne pasta just go together. Tweedle-Dee and Tweedle-Dum. What could be more harmonious than getting a crunchy, juicy asparagus every other bite and a chewy, durum semolina bite in between? This salad is so simple it’s almost not even worth transcribing in the recipe below, but I gave it some chopped pecans for more texture, and a little chopped onion for flavor and because these two latter ingredients were roughly the same size, too, they clumped together nicely in these little parsley-flecked pats throughout the salad.

My camera is covered in glook right now from cooking and incessantly picking it up, putting it down, on top of the stove, fridge, greasy counter spots, and all that fun beating the poor thing takes on. But one thing I did not incessantly photograph was this salad, or not at all until it had been made, eaten, and was being put away. I know… it would have been nice (maybe I should just insert some “stalk” photography?). I’m obviously still living the asparagus high life right now, because I’ve never had such firm, crisp, tasty and fresh asparagus than the last few bunches I’ve gotten at the Greenmarket. So why not indulge while it’s still the right season? They’re healthy as hell, besides.

Which brings me to my next grievance: I hate blanching vegetables. I hate boiling vegetables (so archaic, so unflattering, so vitamin-depleting), and blanching just seems like a half-assed version. If there’s just a tinge of green in the water after the vegetables have been removed from it, I freak out and panic that all the nutrients are in there, and that I need to somehow drink the stuff up, or forever be robbed of the vegetables’ true bounty. I hate the watery transfers to an ice water “bath” right afterward, which all chefs recommend you do after blanching vegetables to “preserve the color,” which frankly is not one of my biggest concerns.

That said, I did blanch the asparagus for this recipe, because it seemed the easiest way of getting them to that perfect “crisp-tender” consistency that I love, and that works so well with pasta and a coat of oily dressing. Anyone have other ideas I’d love to hear about them. Or, if you can assure me that I’m not washing away my daily vitamins with a one-minute blanch, I would appreciate that, too.

Boil water in a shallow pan large enough to submerge the whole asparagus stalks. Drop in asparagus and cook for 1 minute. Remove with tongs or a slotted spoon and immediately place asparagus in a bowl of ice water. Let sit for 1-2 minutes, then remove and let dry.

Cut asparagus stalks diagonally into three or four 2” pieces. In a small bowl, whisk the lemon juice with the garlic, salt, pepper and red pepper and gradually pour in the olive oil while whisking to emulsify. Fold all the ingredients together in a large bowl and stir to coat evenly. Taste for seasoning, adding extra salt, pepper or extra olive oil, if desired.

Two brownie points: You recipe can take as little or as much olive oil as you care to give it, but it really is nice with a lot of it. The flavors are so mild that you just want to taste the olive oil tying them all together. Then, asparagus is a famously low-calorie source of a ton of nutrients, parsley is a minor player in packing in the leafy green vitamins, and the carbs in the pasta gives your energy something to chew on.

Five maple leaves: Unless you eked away your day making it from scratch, shaped pasta comes in a box. And the box (which you should recycle, by the way) came from… well, it depends. My box, Barilla, says, “Product of USA.” Okay. It would be interesting to see if the marketing hook that an Italian product is “Made in Italy” or “Imported” becomes a deterrent rather than a selling point for foods that can easily be made closer to home, like pasta for instance. In the meantime, with this recipe we’ve got pasta made in Illinois, asparagus, onion and garlic grown in nearby farms, a lemon that was not — we’re doing so-so here. And the olive oil from my old bottle that’s just about empty? “Imported.” I guess I must have been lured by that hook, or something.