Go East, young asparagus whore. That’s my motto for this salad, only the fourth or fifth dish this spring of what we should call the Asparagus Chronicles. I threw a dinner party last night, and this was one of the test salads I ultimately rejected for the night’s first course. That salad will probably end up in The Book, and the other unused salad was essentially the same as this one, only with olive oil and lemon juice instead of sesame oil and vinegar (it was also quite good). But this take appealed to my fiendish taste for cold sesame noodles, which always makes me think of summer. The nostalgia is of course complicated ten times over by multiple textures and flavors here — from the meaty portobello and its viscous gray juices, to the crunchy hollow stems of the watercress. The asparagus tips take on a completely different character than their juicy stalks, and who can resist the little burst of a toasted sesame seed between their teeth? 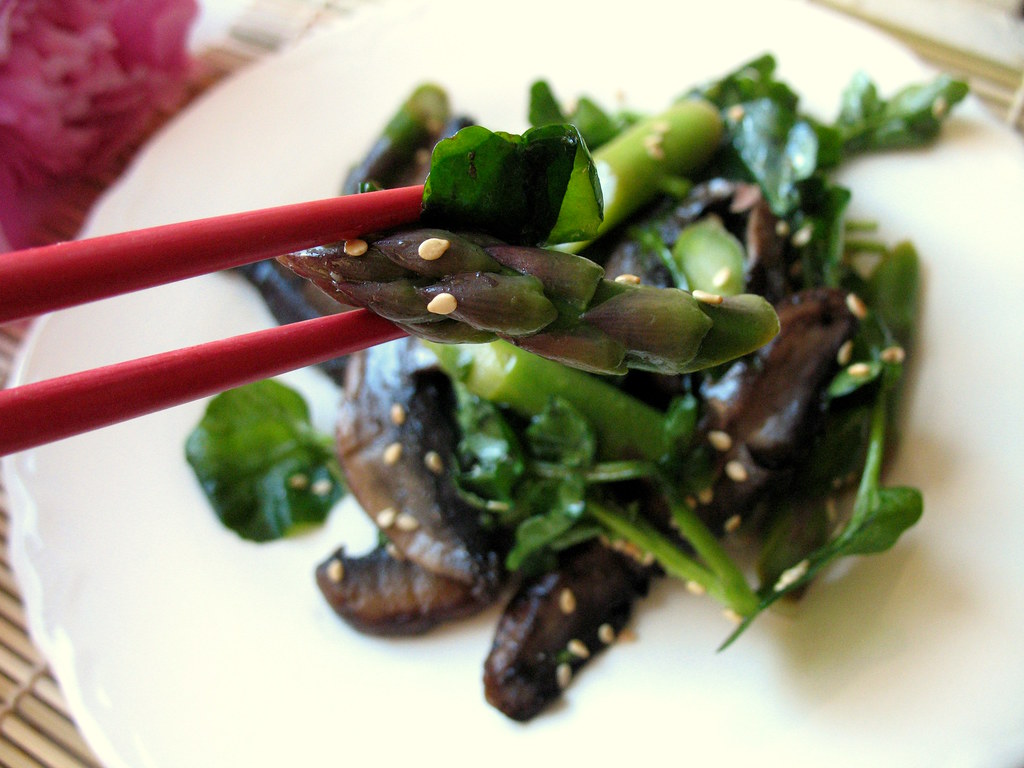 I try not to sound stupid, in person, or in writing, but every now and then the painfully, obviously unreasonably stubborn statement ekes its way out from my stream of consciousness. I’m not talking exclamations of “It’s hot!” in ninety-degree weather (which is often necessary under such stressful conditions), or “What an moron” every time the president’s face appears on TV. But if I’m going to sound stupid on this blog, I’ll try to make up for it. Contrary to what I wrote in the previous recipe involving asparagus, blanching vegetables is not necessarily bad. I find it a little annoying — the soaking in ice water step feels a little counter-intuitive. But it’s quick and effective, and it shouldn’t leach a significant amount of nutrients into the unused water as long as it’s done in under a minute. Which is all that asparagus needs. Just look at how translucent the middle of the stalks become when cooked this way: gorgeous. 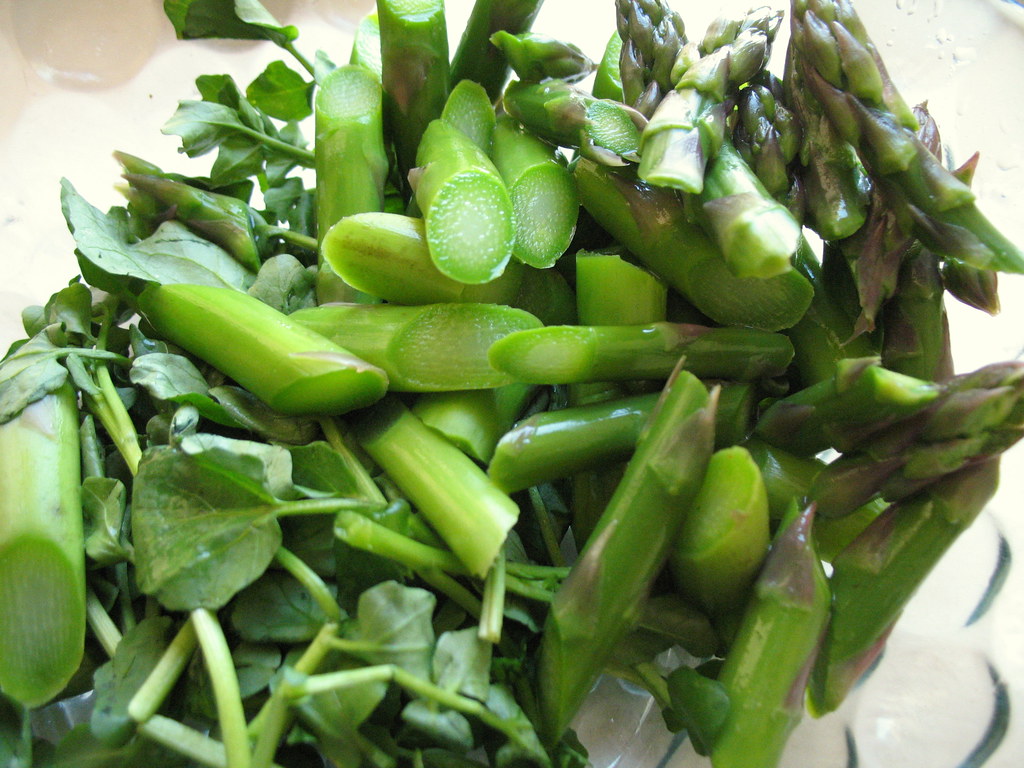 Weirdly enough, hours after writing that recipe and post, I discovered the New York Times article by Tara Parker-Pope about “Finding the Best Way to Cook All Those Vegetables.” (As some of you have pointed out to me — thanks!) It essentially boils down to support for cooking vegetables in a variety of different ways, so as to score as many health benefits as possible. I recommend checking this one out, if you haven’t already, since many of the findings of her research were surprising (i.e. eating more fats along with some veggies boosted absorption of more vitamins than without). 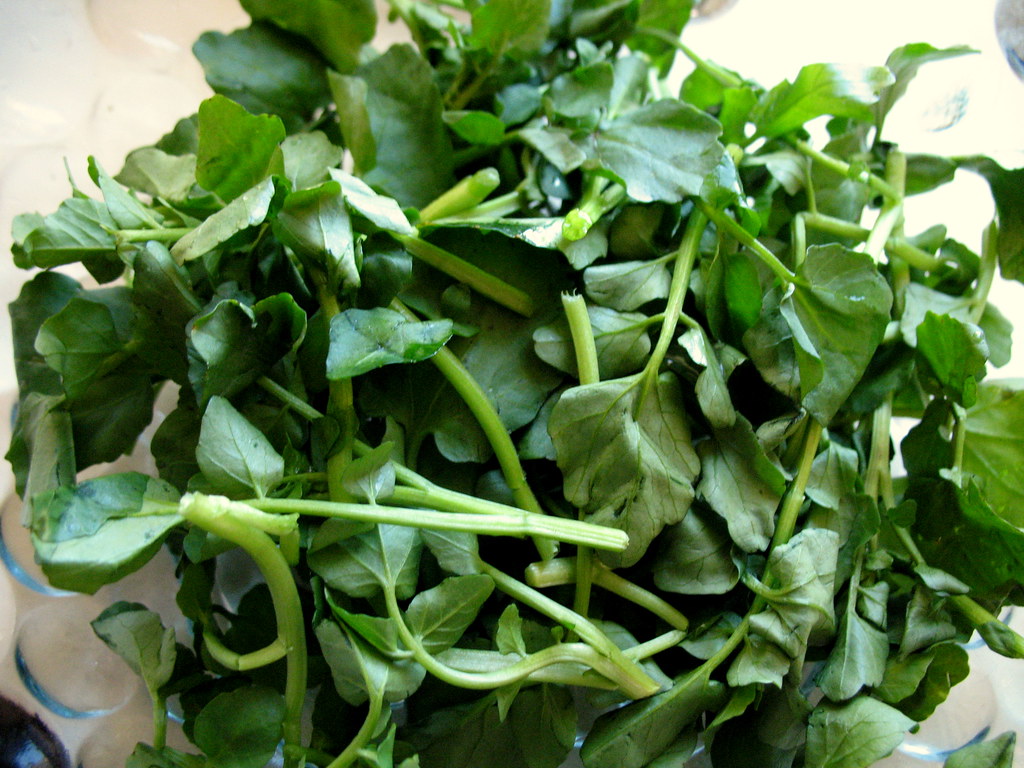 So let’s move on to the watercress, if we may: I love this green. It’s simple, cheap and its leaves hold up really well to a good soak, even after a couple of hours. (This salad travels well to potlucks.) The stems are just clean, refreshing and crispy, so there’s no need to trim off much of them, if at all. I give a handful of the stuff just one or two rough chops at the most. It’s a fairly tasteless, watery plant, but even so there’s tons of essential nutrients and antioxidants in the greens. 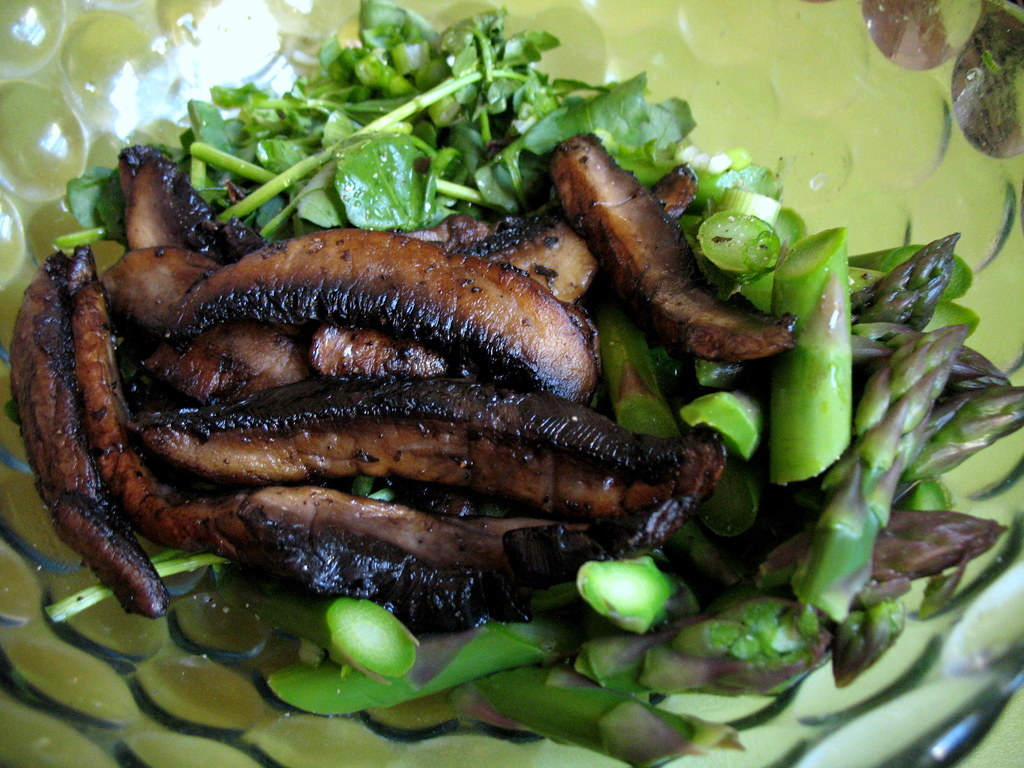 And onto the portobello: I originally wanted to sautee fresh shiitake mushrooms for this, but since they’re not readily available in my neighborhood, and fresh portobellos were being sold at the Greenmarket, I went for these oversized fungi. No regrets, here. I actually can’t imagine how the sharper, funkier shiitake mushrooms might have complicated the dish, but these simply seasoned, just-browned portobello slices were heavenly. I added them into the salad straight from the pan, letting them cool as they were tossed with the greens and watercress. Last but not least, a bit of chopped scallion that becomes fairly invisible in appearance is essential to the recipe’s flavor, in my opinion. 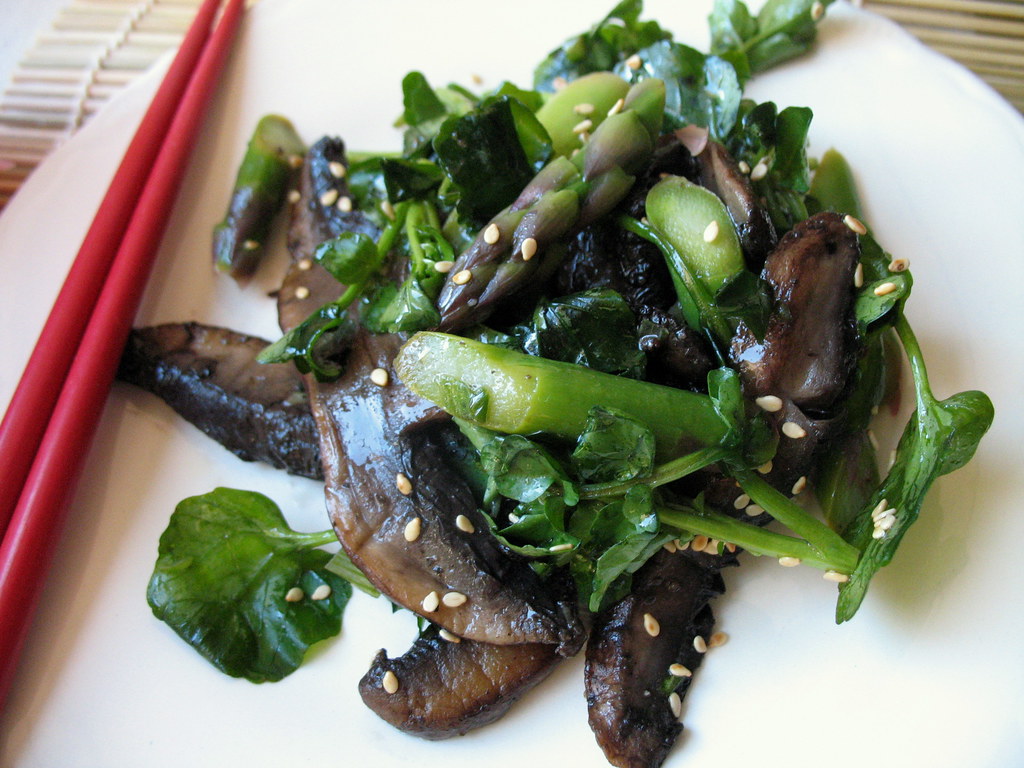 I don’t think I can ever go back to straight-up sesame noodles again. D’oh!

Bring a pan of water big enough to submerge them completely to boil. Drop in the asparagus, and remove after about 50 seconds (or a little longer if your asparagus is very fat). Immediately place in a bowl of ice water and let sit for 1 minute. Remove from water and drain. Once it’s dry, slice into 4 or 5 diagonally-cut pieces about 1-2″ long.

Heat 2 tablespoons of the vegetable oil in a large saute pan. When the oil is hot, place the mushrooms down and cook 1 minute, without stirring, on high heat. Season with pinches each of salt and pepper. Reduce heat to medium-high, turn and cook on other side for another minute or two. Continue to cook, tossing occasionally, for 2-3 minutes. Turn off heat and let cool for a couple minutes.

Combine the watercress, scallions and asparagus pieces in a large bowl. Add the mushrooms and toss once. Add a pinch each of salt and pepper and sprinkle in the vinegar and the sesame oil. Toss well to combine. Sprinkle on the toasted sesame seeds. Cover and let sit 15 minutes before serving. (Can be covered and chilled for several hours beforehand as well.)

Two brownie points: Go diet, go! This is fabulous for your health and light on calories, but you’ll need to eat it with something — crusty bread, perhaps? — for it to pass as an entire meal. (Unless you’re not me and can eat straight up veggies every meal, lucky.) Another thing to keep in mind: portobellos are meaty, yes, but they’re not as protein-heavy as actual meat. Or tofu, for that matter. But they are a “good” source of protein, and combining them with other “good” sources like asparagus and watercress, which are each excellent sources of tons of other stuff, brings the count up significantly. There’s even talk of watercress having cancer-suppressing properties, in addition to packing in iron, calcium, antioxidants and much more.

Four maple leaves: But wait, the love affair with watercress sours here. I got the watercress bunch at a local regular market, not organic, not local, and something tells me it’s far too cold to grow a semi-aquatic vegetable such as this one nearby at this time, if at any time of the year. So like most produce in your regular grocery (where the scallions were admittedly also bought), it probably came in from warm-weather states. Aside from this misstep, the asparagus and portobellos were easy finds at the Greenmarket. Two out of three ain’t bad… Oh, and the toasted sesame seed label says they were distributed by a Taiwanese company. I was surprised by that one, though it made me a bit nostalgic for Taipei. Hmph.