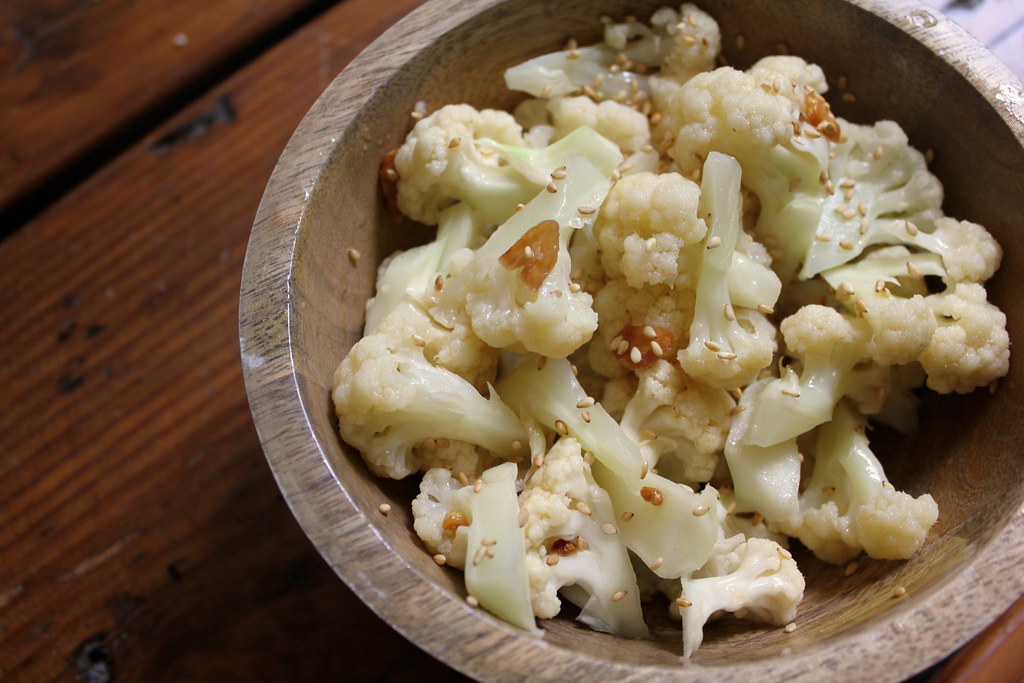 When it’s warm out in the midst of summer, one doesn’t feel as inclined to eat, much less cook. Then hunger kicks in, and heavy foods like fried oysters and hamburgers from street vendors and such come into the picture and, well, why not dig in? A certain fatigue that leads to throw-your-hands-up-in-the-air lapses in eating judgement is an expected part of summertime. Problem is, you just want to throw-your-head-on-the-pillow sleep afterwards.


So whenever I can set aside the time, I cook very simply in the summer. I look forward to chances to do this. Last week, I’d gotten a huge head of crisp cauliflower, despite all the more colorful offerings in season at the farmers market that day. This versatile vegetable keeps well both before and after cooking in the fridge, lending itself to meals throughout the week. 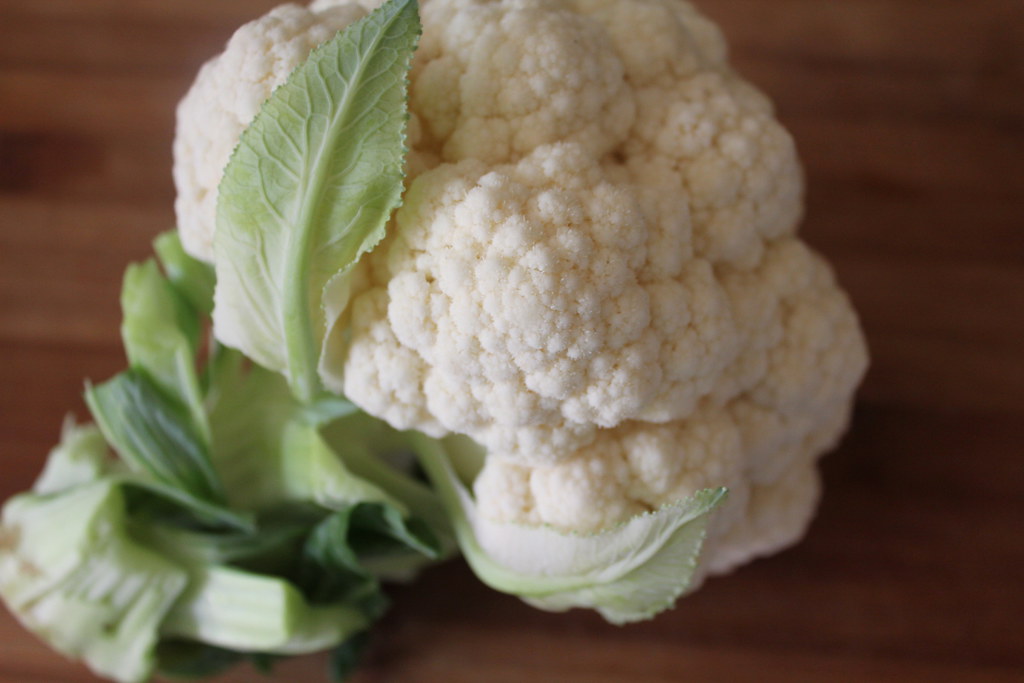 So I steamed a great portion of it, and then massaged it with toasted sesame oil which absorbed each floret the longer it sat. Alone, it’s a snack; with some brown rice and maybe a pile of sauteed greens like spinach or bok choy, it’s a perfect hot summer’s day meal.

It’s easy to get a little lost by food’s simple purpose sometimes. You get wound up in the hullaballoo of elaborate projects, crowd-pleasing presentations. When cooking is also an avenue of providing for other people–surprising with something made just for them, catering to the tastes of many–the easiest plan often gets overlooked. But when you’re confronted with just food, serving the purpose of fortifying and providing sustenance for just you, you begin to look at it a little differently. You begin to acknowledge you. 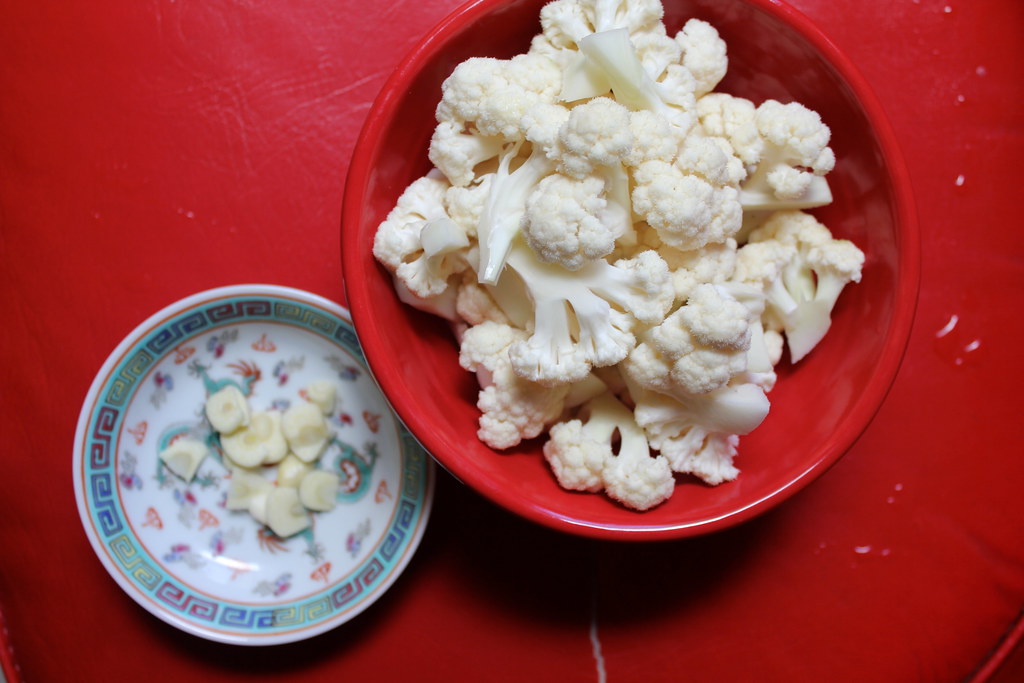 You can repeat this recipe with things like broccoli, asparagus, green beans and carrots, as long as they’re cooked just to a crisp-tender state. Cauliflower probably takes the longest for this to occur, but then it’s no problem to undercook so you can reheat without sodden results afterwards. I reached for some garlic to season the side dish with minimally. Rather than mincing the cloves for a more powerful penetration of flavor, a toastier effect was achieved by frying a few slices in oil before adding to the marinade. 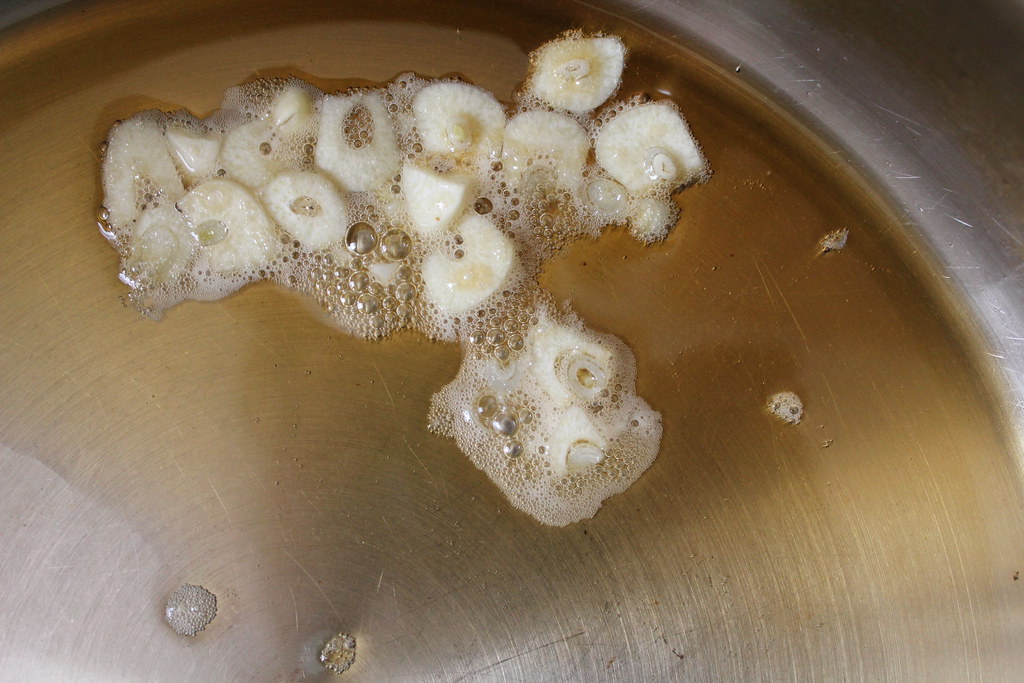 And then I wait a few minutes, to allow the vegetables to cool down. The waiting is the best part. It prepares you for the perfect bite. I don’t want to eat it hot, but then I don’t want to eat it cold. By then the cauliflower will have soaked the sesame oil into its cooked flesh, making it somewhat its own. It’s not an intense dish, it won’t knock your socks off. But cauliflower tastes kind of lovely with a sesame-garlic marinade, and that’s good enough for me right now, this summer’s day.

Toss the cauliflower florets with the salt and about ½ tablespoon of the oil. Place in a steamer rack and steam just all pieces are slightly translucent rather than opaque white and crisp-tender in texture, about 8 minutes.

Meanwhile, heat 1 tablespoon of the oil in a small pan or pot and heat over a medium-high flame. Add the sliced garlic and once it starts bubbling, stir frequently for about one minute or until the slices are just golden-brown. Transfer to a bowl immediately and let cool a few minutes.

Once the cauliflower has been steamed, combine with the fried garlic and remaining oil and toss to mix thoroughly. Let sit for at least 10 minutes to cool thoroughly. Serve lukewarm or room temperature immediately or chill and cover up to 2 days.

Two brownie points: It doesn’t get much simpler than this. A good dose of cauliflower will provide you with plenty of Vitamin C, as well as fiber, potassium and even some protein. As a brassica, it has powerful antioxidants to help cleanse your system. Although I think of sesame oil as a flavoring agent rather than nutrition-booster, this natural, plant-based oil has many beneficial minerals, too.

Seven maple leaves: It’s just one seasonal vegetable, and a couple pantry seasonings. Try it out with many types of vegetables as they come in season in your area’s farmers markets, too.