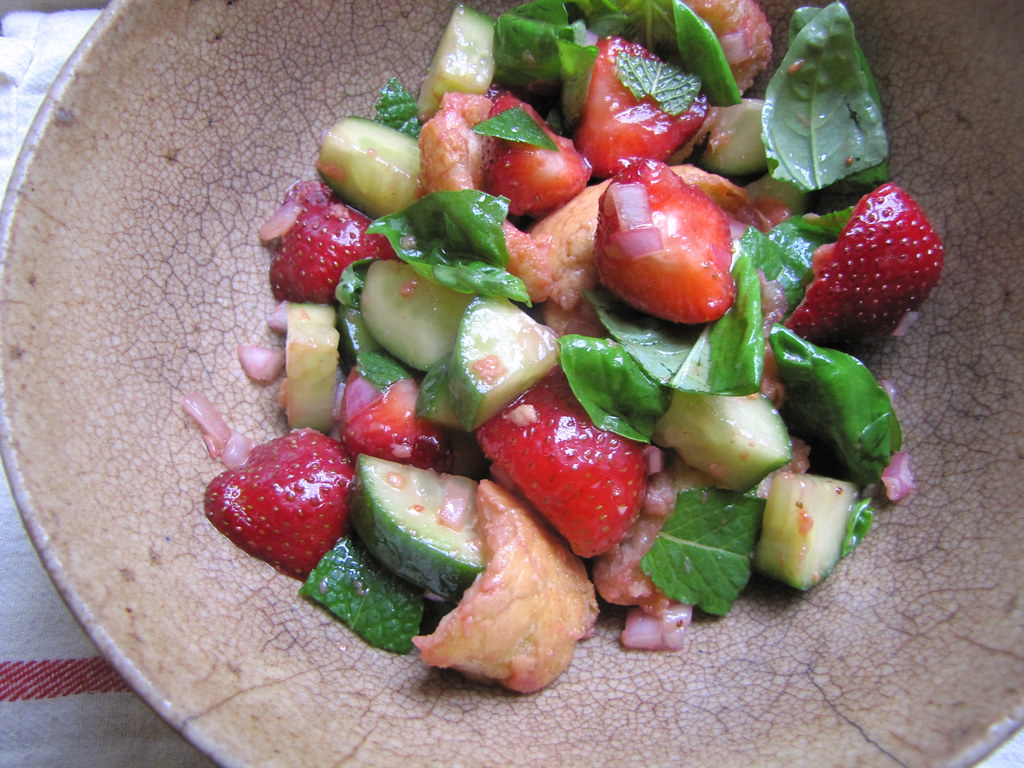 Spring has hit a sweet spot. It’s the beginning of strawberry fields (but it’s not) forever. The very transient nature of local strawberry season for the Northeast signals its worthiness for celebration. The rest of the year, strawberries are insipid and oversized, shipped from across the country before really getting ripe. Fresh in season from a nearby farm, they’re intensely red and flavorful, bursting with sweet juice. Does this sound like a familiar story? Oh yes, that would be about the same case for tomatoes.


So, let’s do as one would with tomatoes a little later in the year with strawberries, now. Let’s make a panzanella, that rustic salad with torn pieces of bread soaked in vinegar and olive oil. Only instead of bright, juicy tomatoes at their sweet peak, let’s use strawberries, along with a clutch of fresh basil and perhaps some mint. 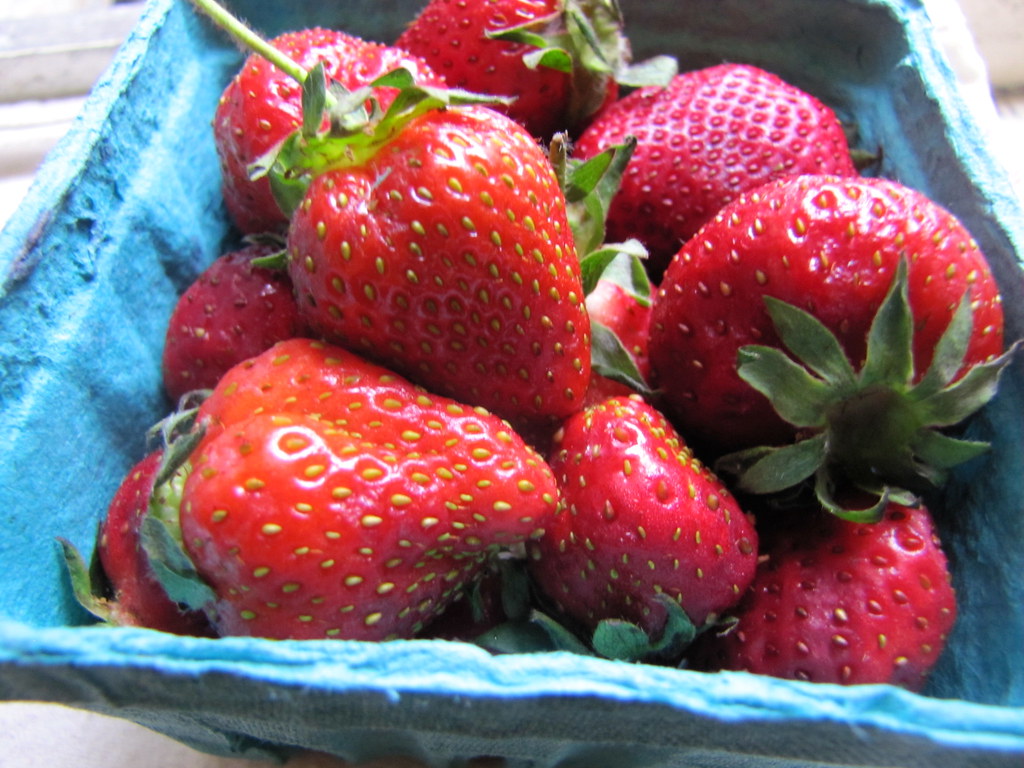 It’s really that simple (but oh so sweet). Go ahead and swap in strawberries for tomatoes in just about any recipe for panzanella you can find out there. You might find they vary a bit — panzanella is after all not refined culinary technique, but a mere suggestion, a coarse philosophy for country kitchen scraps like stale bread. This peasant dish — like so many from Italy — has found its deserved attention for its humble simplicity and grace.

I really didn’t expect to find any cucumbers at this time of year at the farmers market, along with the first wave of freshly harvested strawberries, last weekend. But there they were — seedless, lizard green-skinned, and firm and bouncy as full water balloons — right next to crates of apples that were harvested a few months ago (and not so firm and fresh). Why not? I set out to make a fairly standard panzanella, as they seem to be interpreted in recipes nowadays, with the cucumbers folded in. 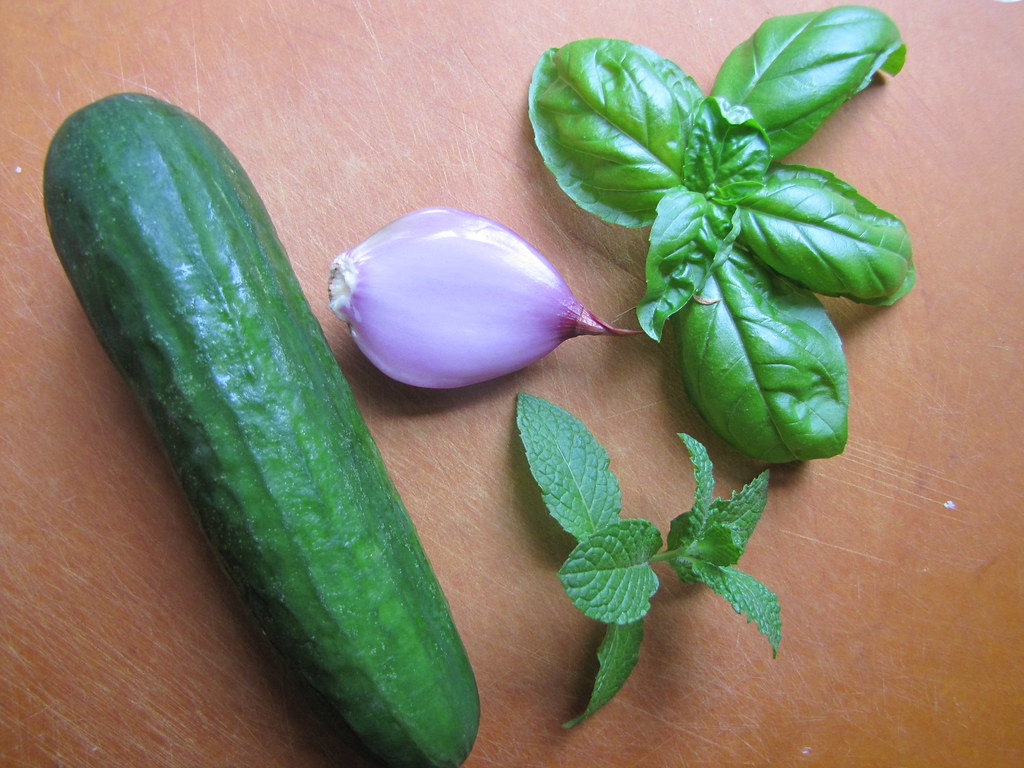 The best thing about just-in-season cucumbers from a small, nearby farm is not just their freshness, but their un-carnauba-waxed state. This glistening stuff I guess protects the skin during long travels and makes the fruit look shiny and bright, but it prevents you from getting all your due vitamins from it because you’ll want to strip the peel off. Don’t bother peeling with unwaxed cucumbers. For that matter, local strawberries that aren’t plumped up with tons of fertilizers and sprayed with toxic pesticides are a much better bet likewise. So if you fall in love with the idea of a recipe, remember that you can always tweak it to incorporate only seasonal, safely produced ingredients from a farm that you can trust. This is how you come about delightful variations like strawberry panzanella, or something totally original by the fate of simply great food. 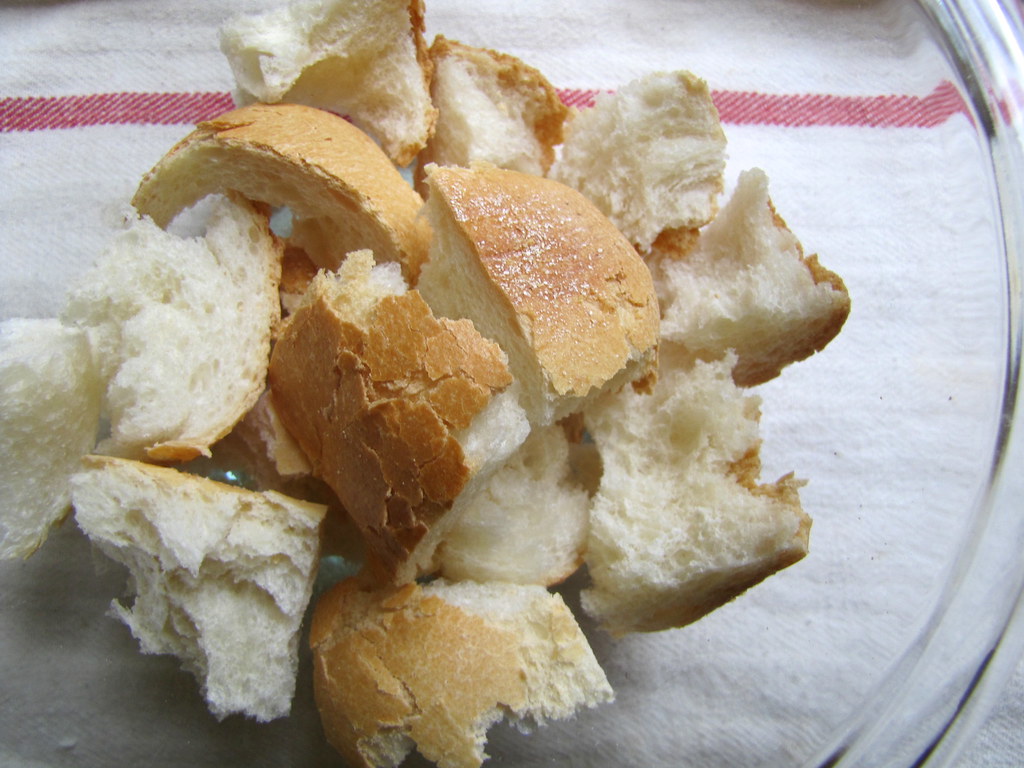 The only other addition to this salad aside from the bread chunks not yet mentioned was a spare shallot, chopped small. I think that this softer-tasting allium works pretty well with strawberry in place of a more pungent red or yellow onion, and has its place. If young, spring onions or scallions are to be found, these too would complement; don’t skip the addition of onion though as strange as it may sound, as it’ll add welcome complexity to the dish. Also recommended: letting your salad sit and soak up the juices from the fruit and vegetables, while they in turn absorb the oil and vinegar. For that reason, this is a great dish to bring to pack ahead for a potluck or this weekend’s Memorial Day picnics and barbecues.

I’m already looking forward to making panzanella with peaches once they come to fruition in another month or so.

Combine all ingredients in a large bowl and toss thoroughly. Let sit at least 20 minutes, or chill covered overnight before serving.

Five brownie points: For a salad or starter course, I have to be lenient on this one. It satisfies with its freshness but can still manage to fill you up pretty well thanks to the bread’s starches. However, that stale bread is still bread, and not more protein and fiber-rich whole grains alone. Sure, you can use any type of bread you might like, the more whole-grain the better for that, but call me a purist — I kind of think a country white loaf or baguette tastes best for this. That said, the abundance of fresh herbs easily makes up for the vitamins in most types of lettuces, so use them as copiously as you like. And the strawberries will add to that Vitamin C as well as lycopene, found in most red fruits and veggies (like tomatoes).

Nine maple leaves: Gosh, I can’t really say anything here wasn’t found locally from the farmers market except for the oil, vinegar, and salt. Extra point for using up stale bread, that castaway of so many dinner parties that redeems itself in so many ways.