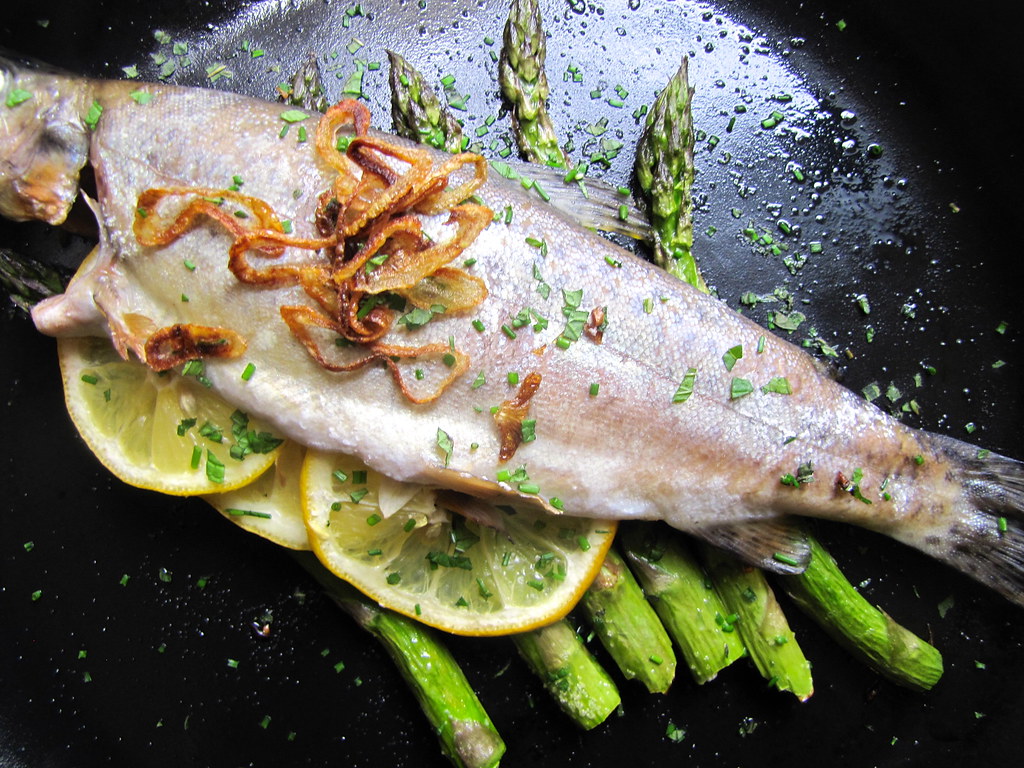 I love the idea of popping a whole fish in the oven, to roast until sizzling sounds are heard, and the flesh is juicy and opaque. But I don’t love the idea of just plunking the whole fish down on a baking sheet, as it’ll stick to the pan, becoming slimy and weird. The fish’s natural juices will get totally wasted while cooking, spilling onto the abyss of a blank sheetpan that you’ll have to scrub well soon. So I like to pile vegetables underneath my fish, and asparagus are a perfect tool for creating edible grillbars for this purpose. They remind me of playing with colored wooden logs and stacking cabins with them in preschool.


Not only are asparagus in season right now this spring, but they’re handy in ways that you probably haven’t explored before. It took me days to come up with a recipe featuring asparagus, because I felt deep down that there was probably no better way to prepare asparagus than very lightly, and just with something to provide richness — not with too much extra flavors, which would detract from its very subtle, grassy earthiness, but to coddle it with fats to enhance it. That’s why asparagus is often topped with a poached egg, with hollandaise sauce, steamed lightly, grilled quickly, never manipulated too much from its natural state. This is so wise. 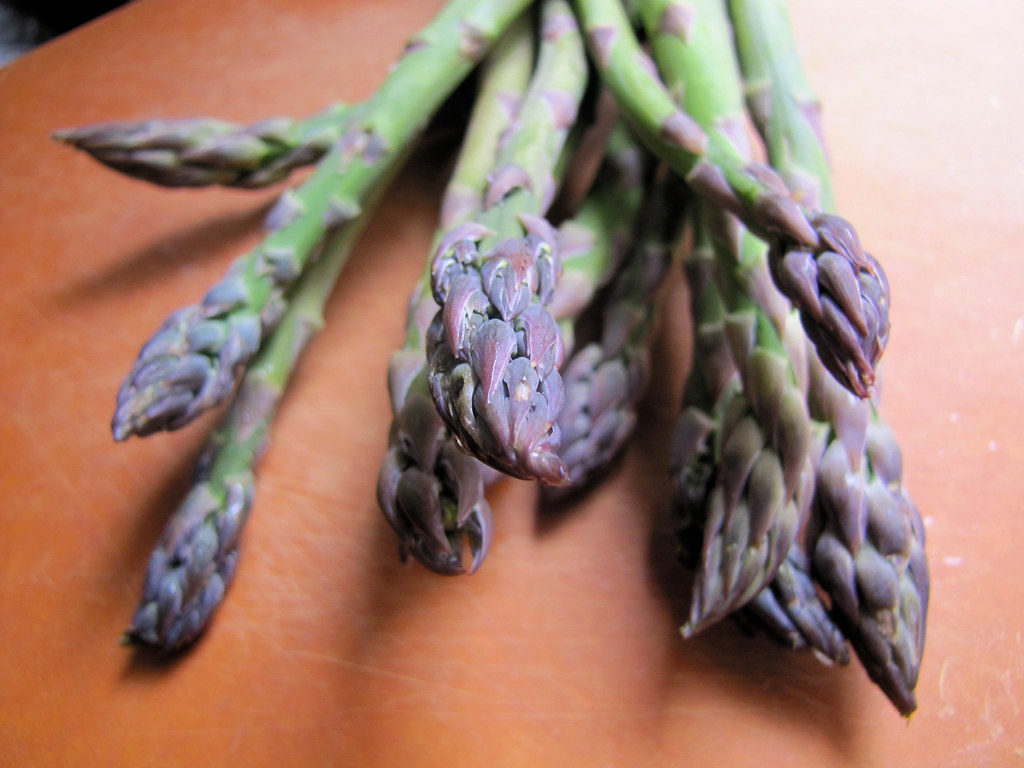 
So I determined not to make an asparagus soup, pesto, or god forbid, ice cream, but something that played off the natural appeal of the lightly cooked stalks. What better way to showcase this simplicity than serving it along with something else as minimally dressed, prepared and pure as a whole, very fresh fish? And what better way to make use of its flavorful moisture than by cooking them together, in a log structure that doesn’t require much assembly? 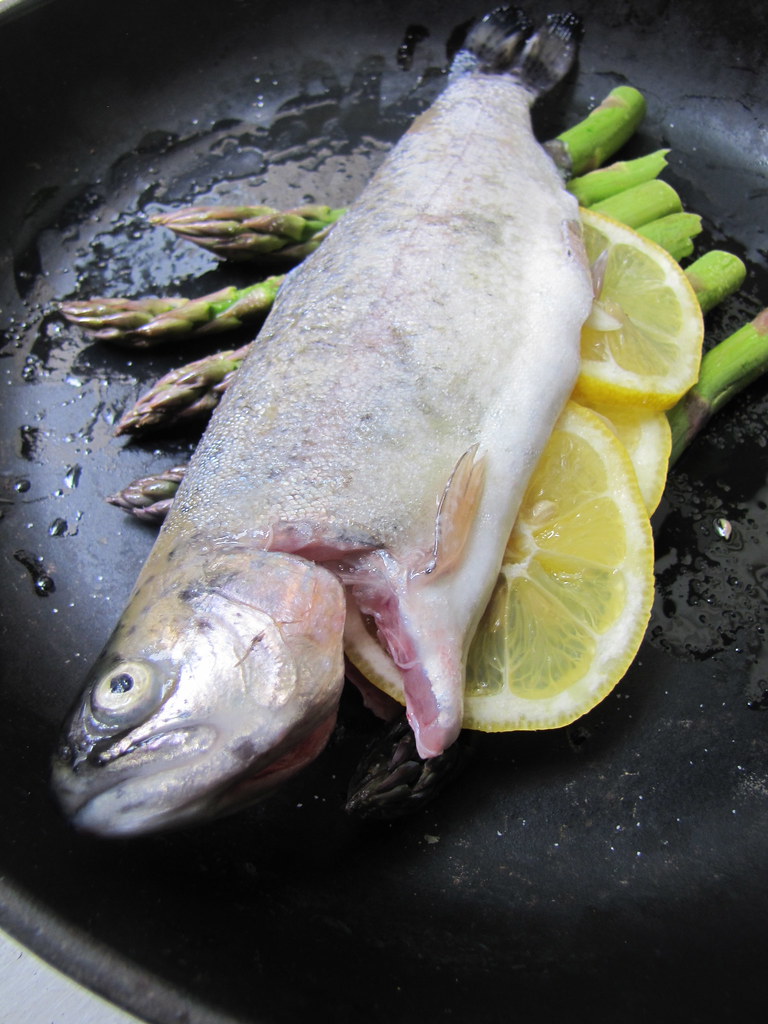 
I’m not a psychologist, but the pleasures of a meal that’s cooked practically blindfolded and in a few minutes make me feel clean and down to earth. I get a retreat out of this. A full inhale of the spring. The ingredients can be sourced as painstakingly as possible, to ensure optimal freshness, but the cooking is no-fuss and full of whimsy.

Like a whole chicken with its bones, a whole fish is a much more economical and flavorful option than spliced cuts. I recommend going for one, and I was able to get fairly small ones from the fishmonger of Max Creek Hatchery today at Union Square Greenmarket. He raises rainbow trout in his own hatchery in Upstate New York, smoking some of them and harvesting others the day (or morning) before bringing them to the market every Wednesday. The rainbow trout is one of my favorite types of fish — mild and delicate-tasting, just uber-fresh and slightly coral-tinted thanks to its healthy diet of beta-carotenes. I consider this catch a rare gem in my neck of the woods, but I’m sure that any really fresh whole fish from a trusted fishmonger would work great for this recipe as well. 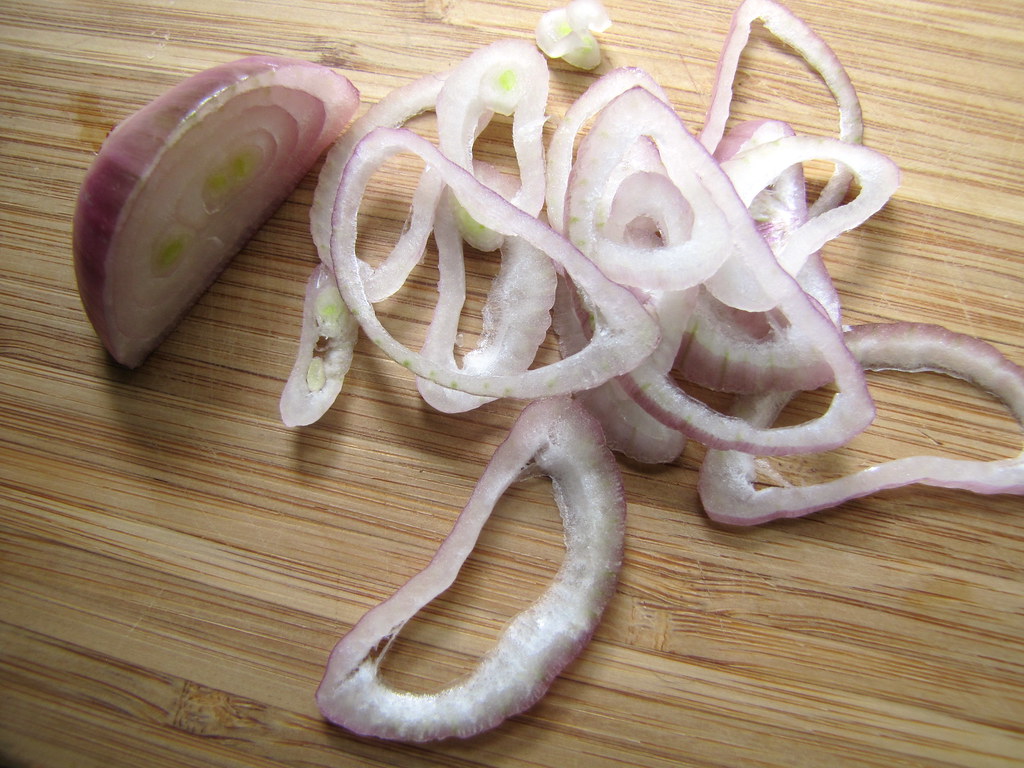 shallots are sliced to crisp in a hot pan


For a little extra flavor, I stuffed the cavity my my whole fish with a few slices of lemon and good sprinkle of salt and pepper. I’ve seen recipes involving garlic cloves and assorted herbs to include here, too, but find that spring herbs (like the chives and mint I chopped up) taste better when sprinkled on top after cooking, fresh, and that fresh garlic is too overwhelming for the subtle-tasting flesh. However, since the skin of a roasted fish never gets quite as crispy as it would with a pan-roast, I slivered a shallot to crisp up in a shallow pool of hot oil to sprinkle on top of the fish as a crunchy garnish. This extra topping helped satisfy the missing “crispy” element. 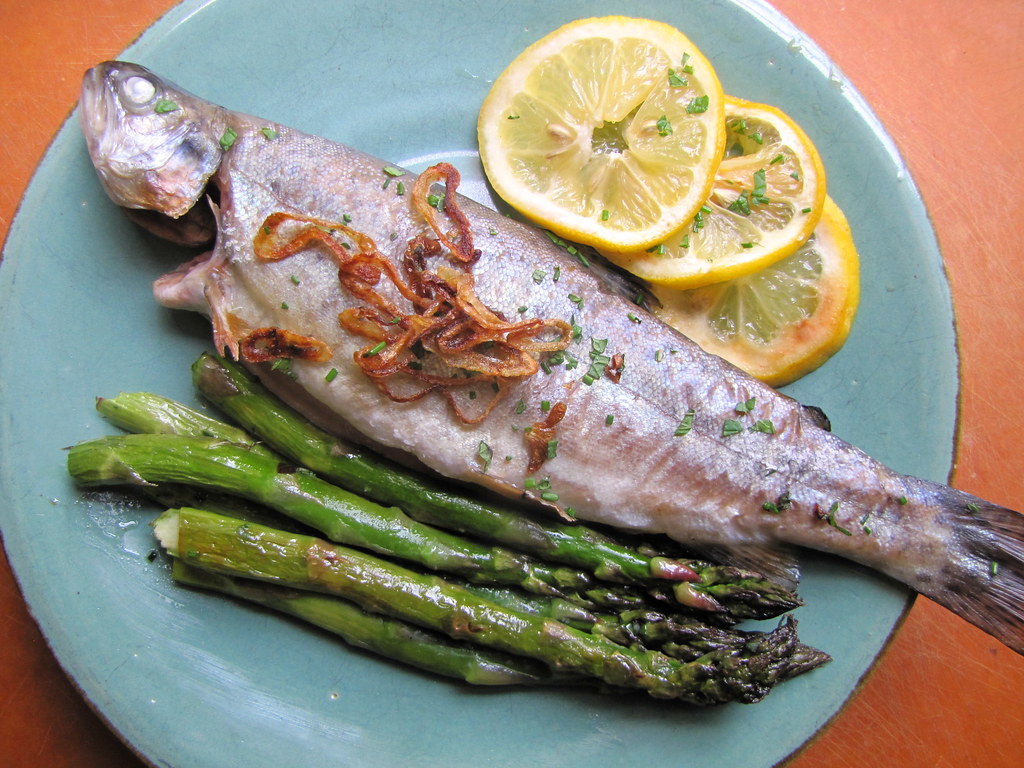 How do you eat this unwieldy meal of a whole fish on your plate? Just pick away at its top half, prodding the meat away from its spinal bones as you go. Then, once you’ve finished it, peel off the entire spine (and head and tail, which comes along easily with a gentle pull), and polish off the bottom half of the fish, now a cleanly trimmed fillet. Squeeze on some extra juice from that lemon that was stuffed in its cavity, and pile on some of those crispy shallot rings with your bite for crunch. If you’re looking to round this out as a whole meal, just rip off pieces of a baguette, to sop the juices, lemon and herbs with at the bottom of your plate. A pile of cooked grains like quinoa or rice will absorb some of that, too. The best part of the meal may just be the asparagus, delicately flavored by the fish while perching it up as it cooked.

Preheat oven to 425 degrees. Pat fish dry with paper towels and season both sides as well as its cavity with salt and pepper. Rub the outside with a thin coat of olive oil. Coat the trimmed asparagus stalks with olive oil and a pinch of salt and pepper. Place the lemon slices inside the cavity of the fish.

On an oven-safe pan such as a baking sheet, casserole or cast-iron pan, arrange the asparagus stalks on the bottom, spaced at least 1/2″ apart so that none touch one another. Place the fish on top of the asparagus to elevate it from the pan. Roast for 15 minutes.

Meanwhile, heat a small pan with another tablespoon of olive oil over medium-high. Add the shallot slices and let them sizzle a few moments, stirring. Reduce heat when they begin to brown and continue to stir gently, about 1-2 minutes, or until evenly golden-brown. Transfer to a paper towel and let cool.

Cost Calculator
(for one serving)

Four brownie points: You’ll want to include a starch such as a crusty baguette or whole grain if serving it alone as a meal, or serve it as the starring course of a longer menu of courses. But as such, it’s a healthy and hearty entree that’s full of protein and precious omega-3 and omega-6 fatty acids from the substantial serving of fresh fish. When you’re getting whole fish that’s small enough to serve one portion (or two smaller portions), you can be assured that it carries a much lower level of toxins like mercury than big, carnivorous fish like salmone or tuna. These small fish simply haven’t lived as long to accumulate as much of the possible contaminants. The fresh, minimally prepared asparagus will provide you with lots of antioxidants like Vitamin C, Vitamin K and even Vitamin E, as well as a host of minerals like zinc, and a good fistful of fresh herbs will provide even more of that as they help flavor your plate.

Seven brownie points: A small-scale fish hatchery such as Max Creek is a great way to get your seafood outside of the wild, as long as its cleanly maintained. Sustainable aquaculture has made great strides in recent years, but the biggest challenge is knowing where your fish comes from and how it was caught or raised; shopping from local purveyors directly is key to alleviating that. Spring asparagus is being harvested for its short annual season right now locally, so it’s a great time to grab a bunch before it gets too warm to grow around here.