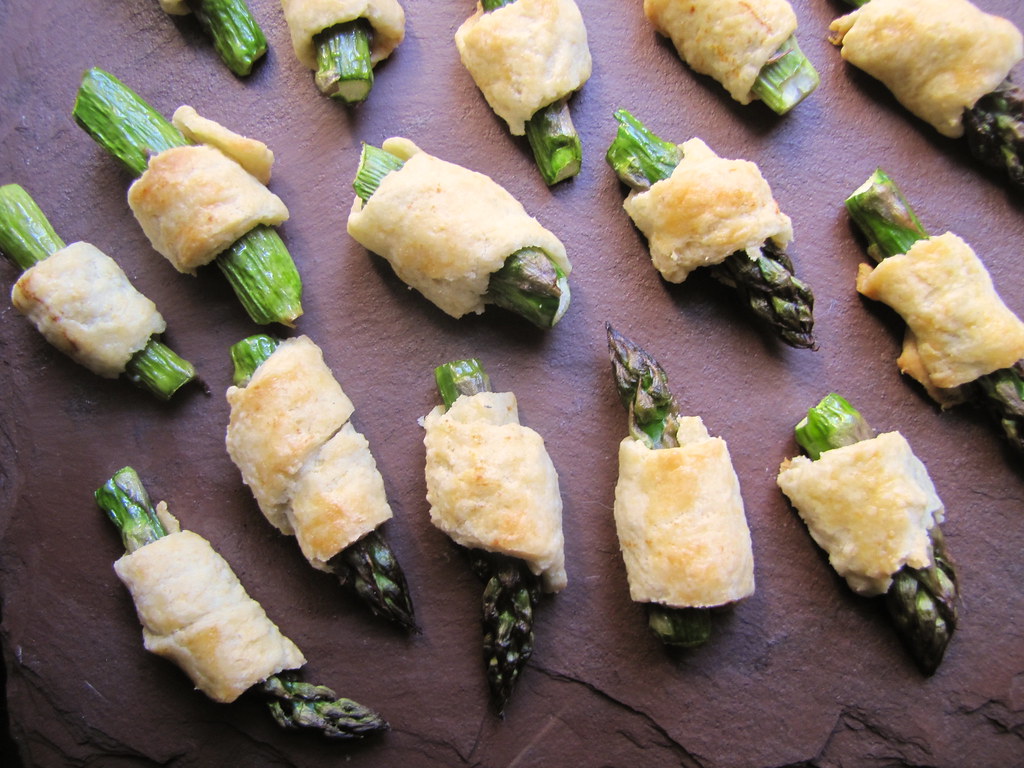 It didn’t take too long to come up with another way to playfully serve up asparagus: it’s a new finger-food party snack! These little doodads of spring goodness won’t trick you into eating something you weren’t suspecting — at first glance, with their evergreen tips sticking out, the asparagus give themselves away. They might be a laughably sorry substitute for “pigs” in these blankets, but asparagus with a buttery crust has its charms. And I’ll take anything that makes a party snacker laugh as they’re pigging out.


I happened to find myself with extra thick, chubby asparagus after using up all the skinnier stalks from a bunch for a previous application. It helps to keep similar sizes in one batch for cooking especially in the case of asparagus, as they can vary so much — at times chive-like spindles and others, permanent marker-sized logs. At least, that’s the way I’ve been finding bunches of asparagus to be in the height of its season this spring. 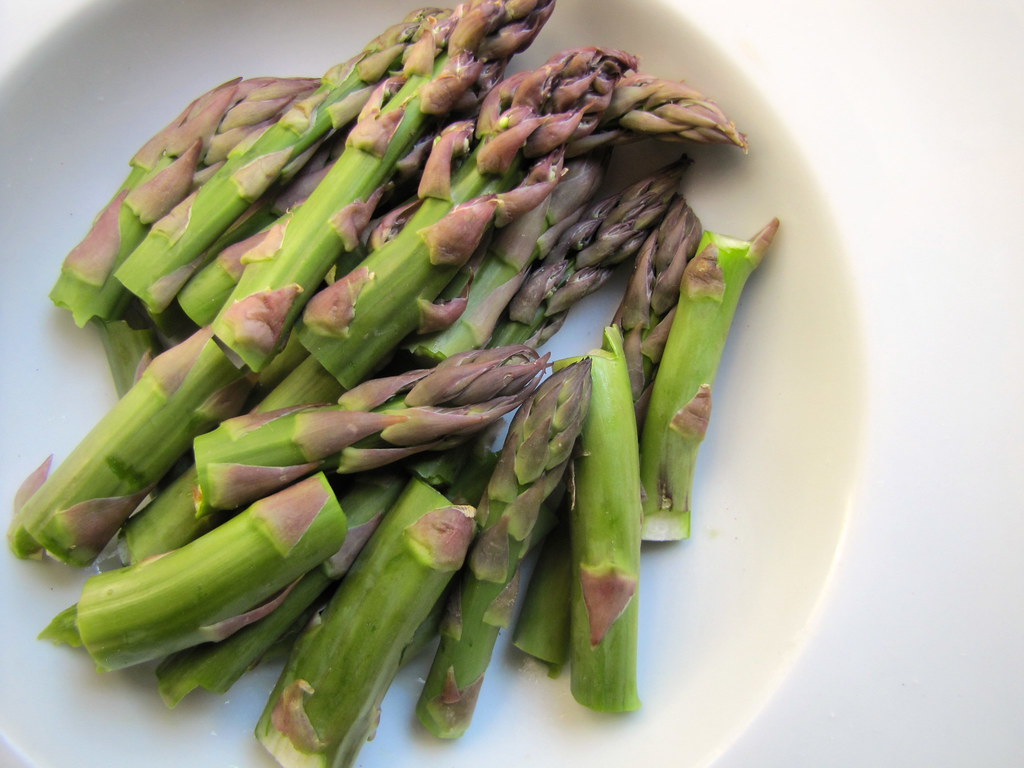 I’ll admit this is not the simplest way to make asparagus shine. Playing with dough and baking was never my preferred way to do an in-season ingredient its due justice. But the work pays off once you see how bite-sized and X they turn out, not to mention how quickly they’ll get gobbled up. I’m pretty sure pigs in a blanket as we know them — with hot dogs — were made popular by Pilsbury, as a way to use their “crescent roll” dough. That stuff that pops out of a can is fine enough to use here, but it’s way too easy to mix up your own biscuit-like dough with good butter, and it tastes better too, if you ask me. It’s a “quick bread” after all — made with baking powder instead of yeast — and takes only a couple minutes. Here’s how. 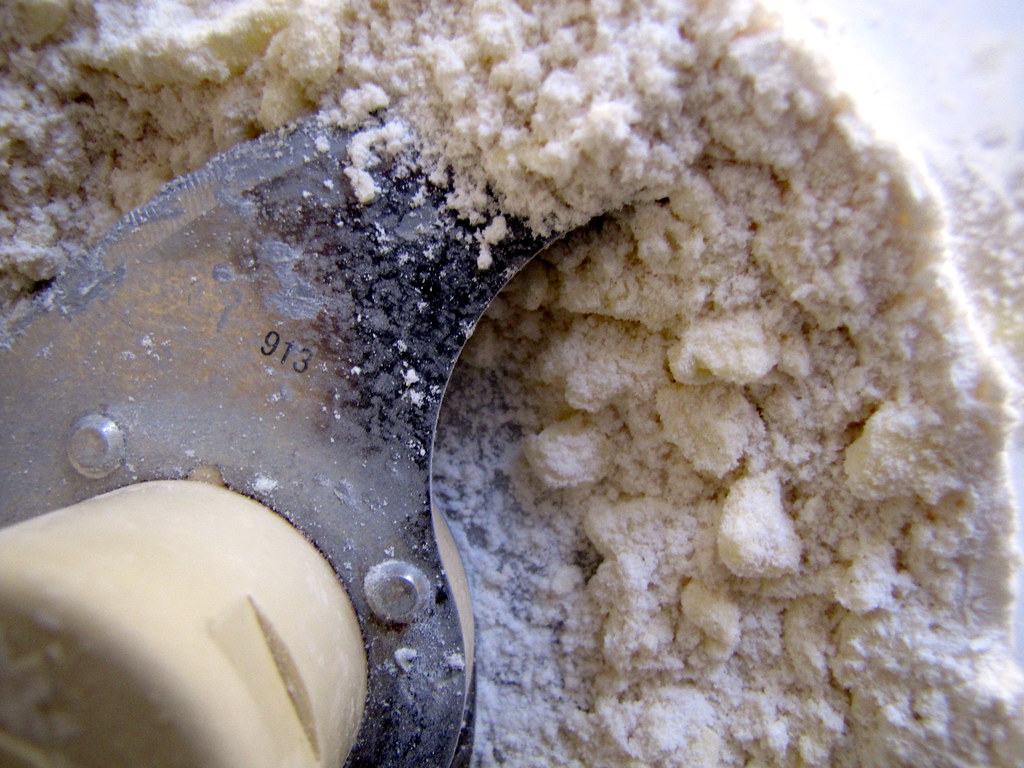 butter gets a quick chop with flour and baking powder


You crumble some cold butter with flour, either with your nimble hands or a pastry blender until the chunks are no larger than pea-sized. A food processor makes quick work of this, on a pulse setting. Then fold in some cold liquid just until it comes together. Of course, add some salt, baking powder, and a touch of sugar if you like (I don’t sweeten the dough, however, in this recipe). 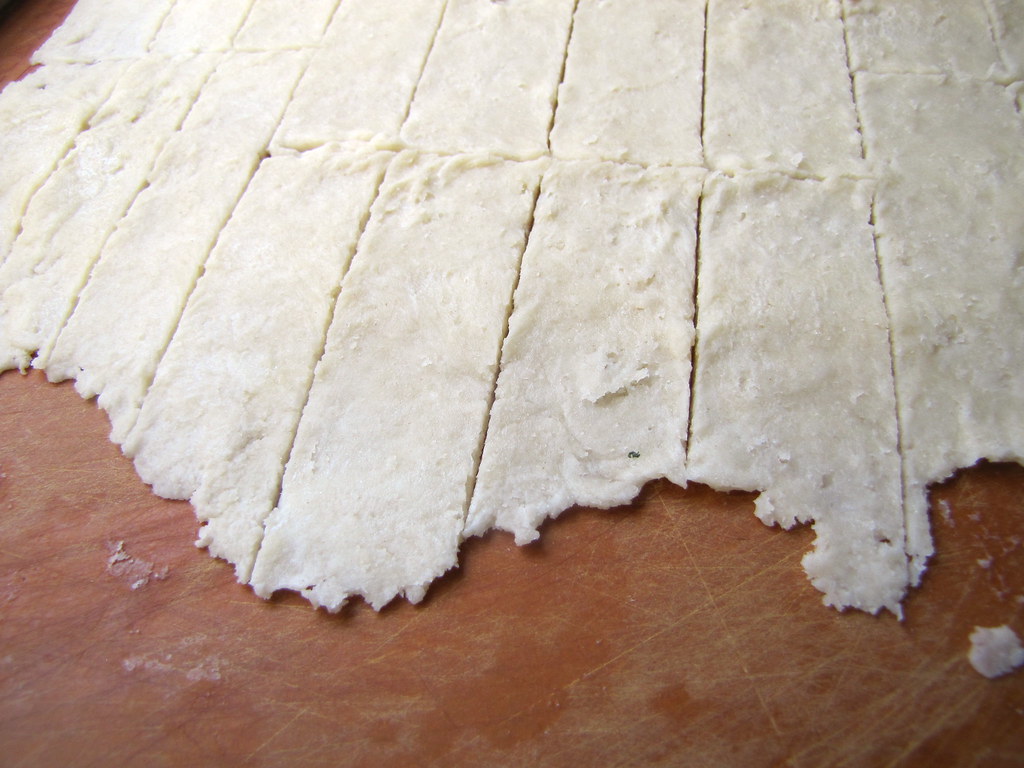 cutting the dough to roll-able strips


Next, roll out the dough, after letting it chill, and slice strips as if you were about to make a lattice-crust pie. This part is the trickiest, since it demands agile hands, but try to wrap those strips around one to two-inch pieces of asparagus, before setting it down on a baking tray. They can be inconsistent in looks, in neatness. They’ll become much less so once baked, puffed up and golden. A smear of egg wash on the tops will help out with the latter. 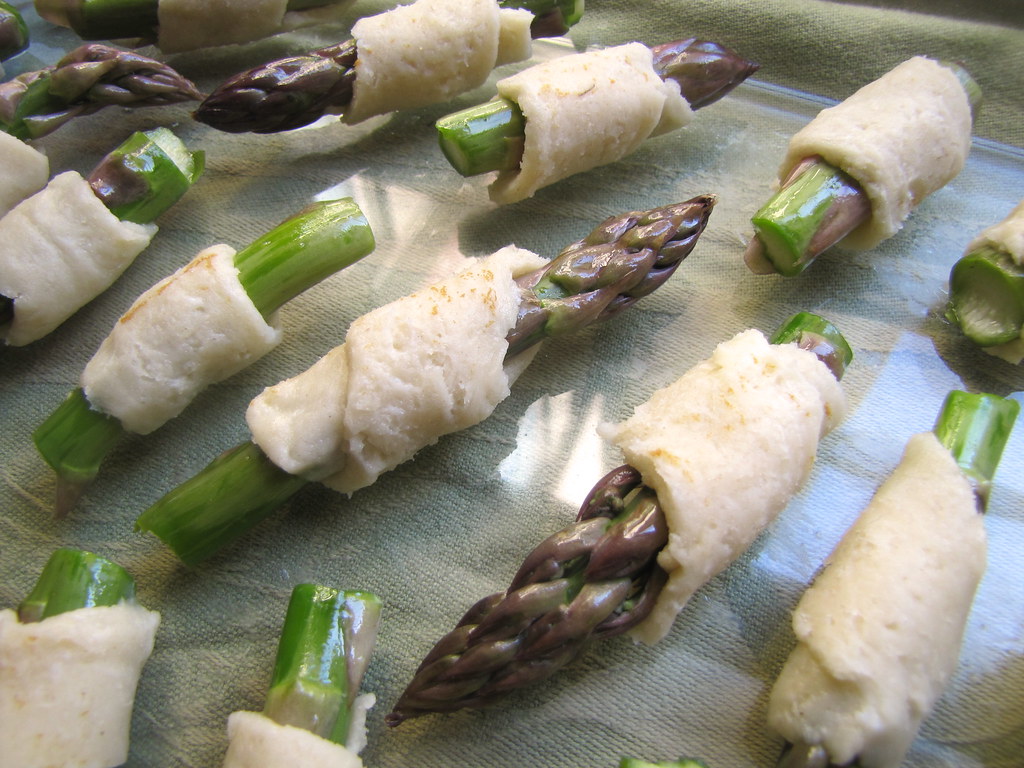 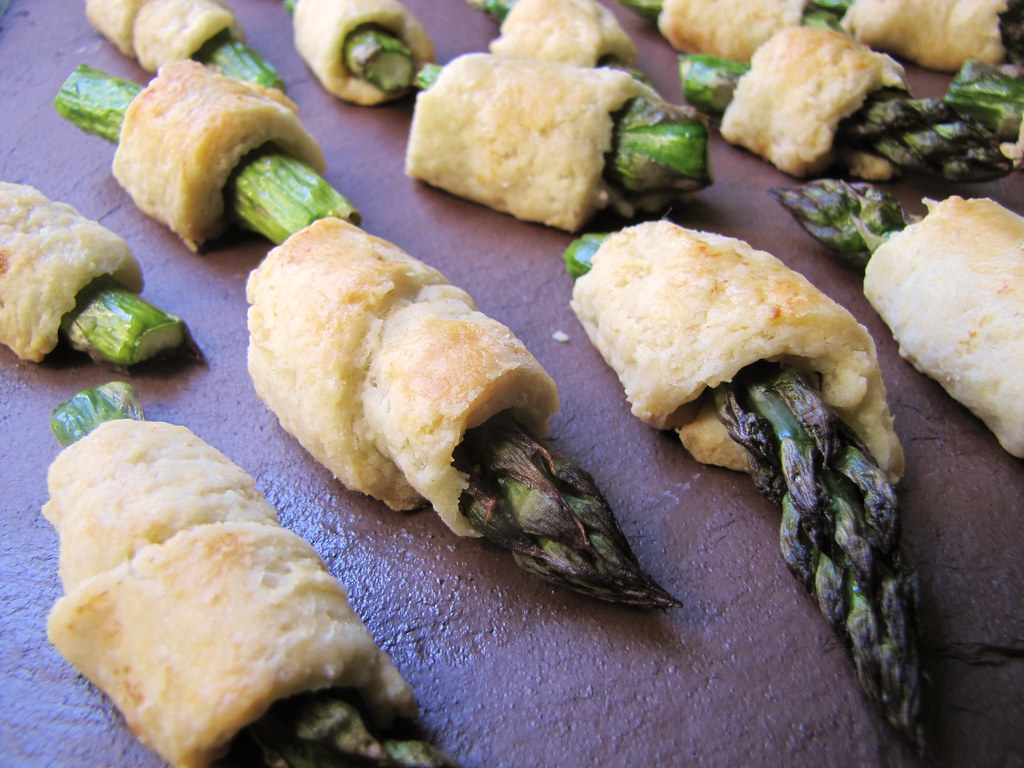 
That’s really all there is to it, except for determining what type of dip, if any, to serve them with. Ketchup and mustard are too overpowering for this mild spring vegetable; lighter-colored dressings might work here instead. I prefer a touch of sea salt to sprinkle on them before baking. It’s a far cry from the standard pigs in a blanket, but it’ll do well as an antidote.

Asparagus In a Blanket
(makes about 32 pieces)

Preheat oven to 375 degrees. Combine the flour, baking powder and 1/2 teaspoon salt. Using a pastry blender or a food processor, cut the cold butter into the flour, just until the pieces are no larger than a pea. Sprinkle in the cold water or milk one tablespoon at a time just until the dough is sticky enough to form a ball. Cover and chill for 20 minutes.

Toss the trimmed pieces of asparagus with the olive oil and a couple pinches of salt and pepper.

Roll the dough onto a floured surface. Slice them into about 2-inch long strips, about 1-inch wide. Carefully roll each asparagus piece around one strip of dough at a time, and place down on a cookie sheet with the last, untucked piece of dough on the bottom. Brush the tops of the pieces with the egg wash and an additional sprinkle of salt.

Bake for about 15-20 minutes, or until the tops are golden-brown. Let cool at least 5 minutes before serving.

Cost Calculator
(for about 32 pieces)

Six brownie points: Enveloping vegetables in a buttery, refined flour biscuit dough isn’t exactly a harmless way to get your greens, but hey, they that a little fat helps the absorption of vitamins. Those vitamins in asparagus include lots of Vitamin K, folate, Vitamin C and Vitamin A, and they carry trace amounts of many minerals like calcium, too.

Six maple leaves: When making your own dough you can know your ingredients better, like butter from cows that aren’t drugged up with hormones and have a healthy diet. That’s a main ingredient in this dish, the other one being a seasonal treat from the farmers market just at this time of year: asparagus.