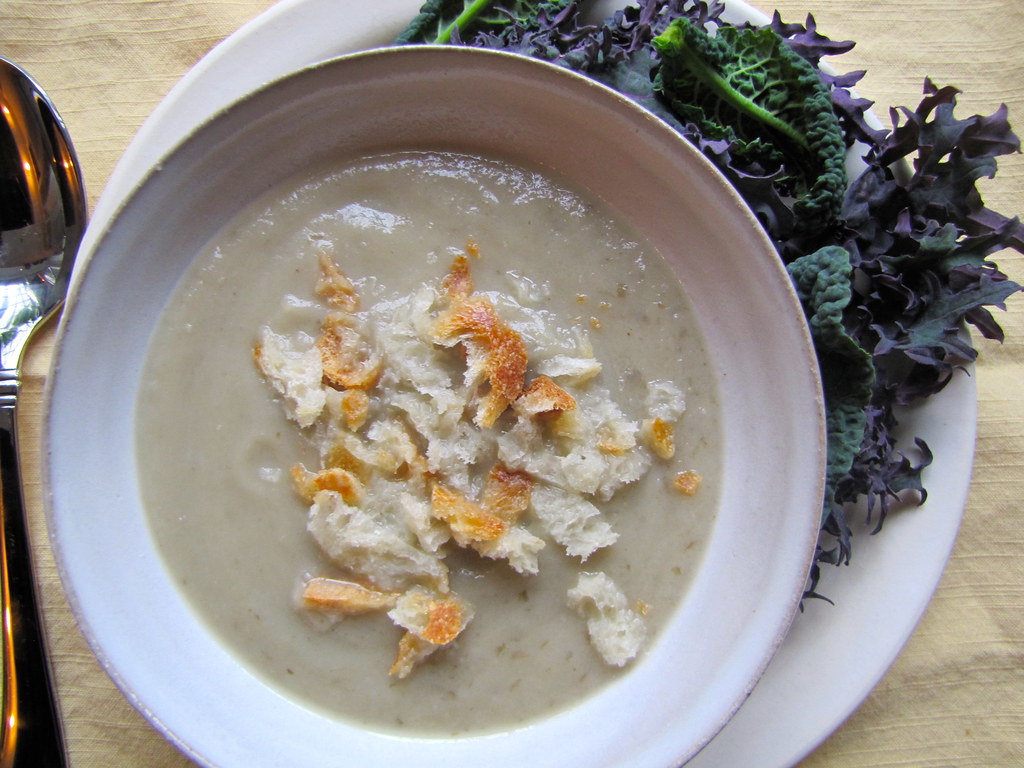 Nutty, buttery, sweet, earthy — sunchokes are a singular tuber that is best when focused on alone. Like a fine wine that ought not be paired with red meats or aged cheeses, this one is delicate enough to miss the nuances of if you blink — and that would be a shame. So I thought I’d showcase its true colors in a velvety-smooth, simple soup.


Its true colors are not, however, gorgeous. I left the skins on while roasting the gnarled knots, to be pureed as much as they possibly could be later on (creating a greyish cast, ultimately). Eh, it’s okay. Sunchokes are not really meant for the eye in any case — they resemble the things that might sprout from an ogre’s head — and their dull pallor does not even match the ivory or cream of parsnip or rutabaga, respectively. 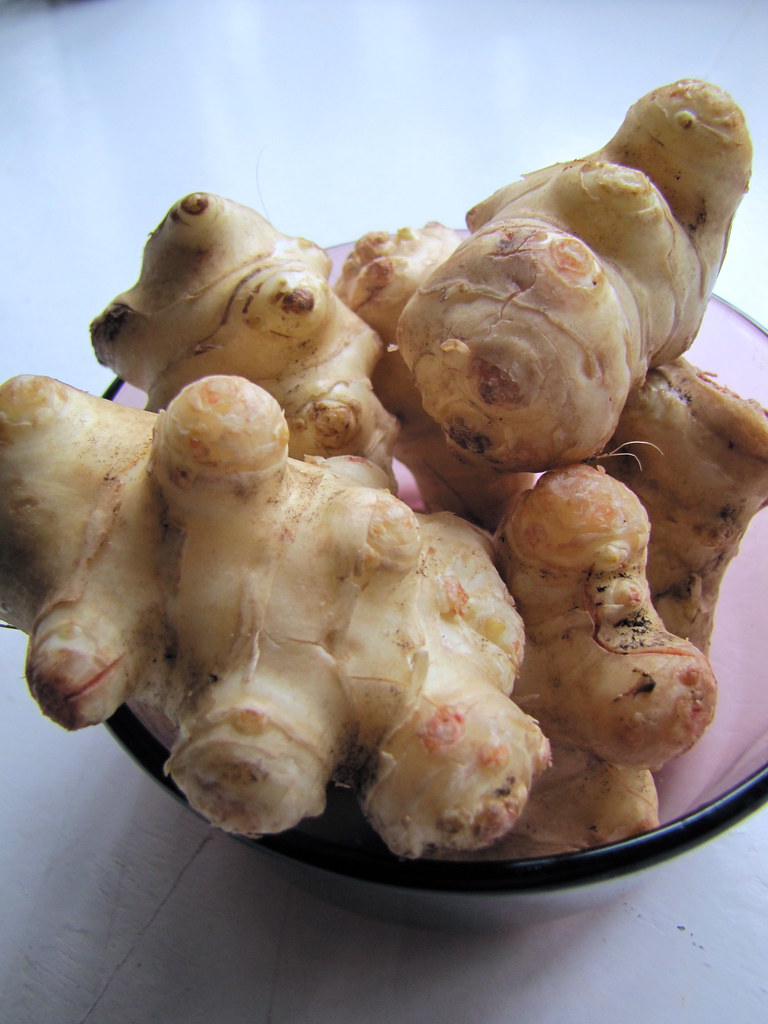 
That said, you can confidently make a soup with any of the aforementioned root vegetables or tubers (which sunchokes are, along with potatoes, NOT to be confused with roots – here’s a quick guide on how they grow off of one another like a network of tumors rather than anchor a leafy vegetable, in a biological sense). And with said confidence, you can do it in stride with your everyday activities with little adjustment necessary, to drink in the unique flavors of your chosen highlighting plant.

This soup is something that you can start off by sweating some onions in your kitchen while the oven is roasting the sunchokes, then combine them with stock and let it simmer while stepping into the shower, and return to merely puree then lap up with a spoon. That is a tried-and-true testament, as it’s basically how I made it on one sleepy weekend afternoon. When you’re aiming to showcase the pure flavors of a food, it makes your job a lot easier. And for the good of both your taste and time, I like to think. 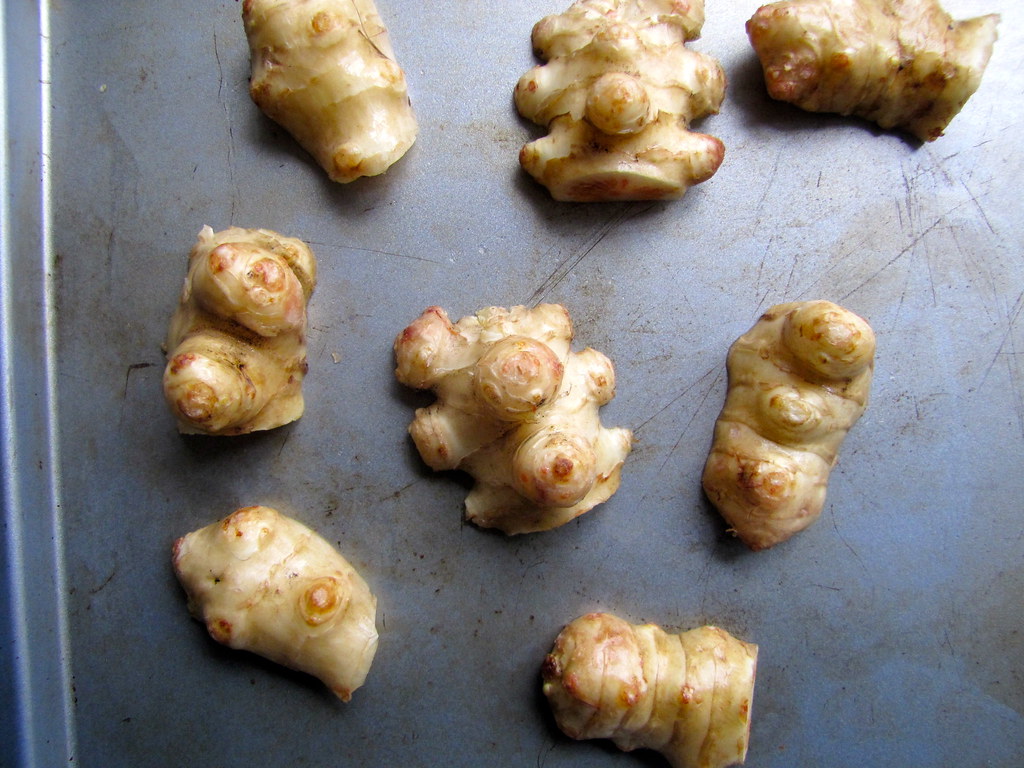 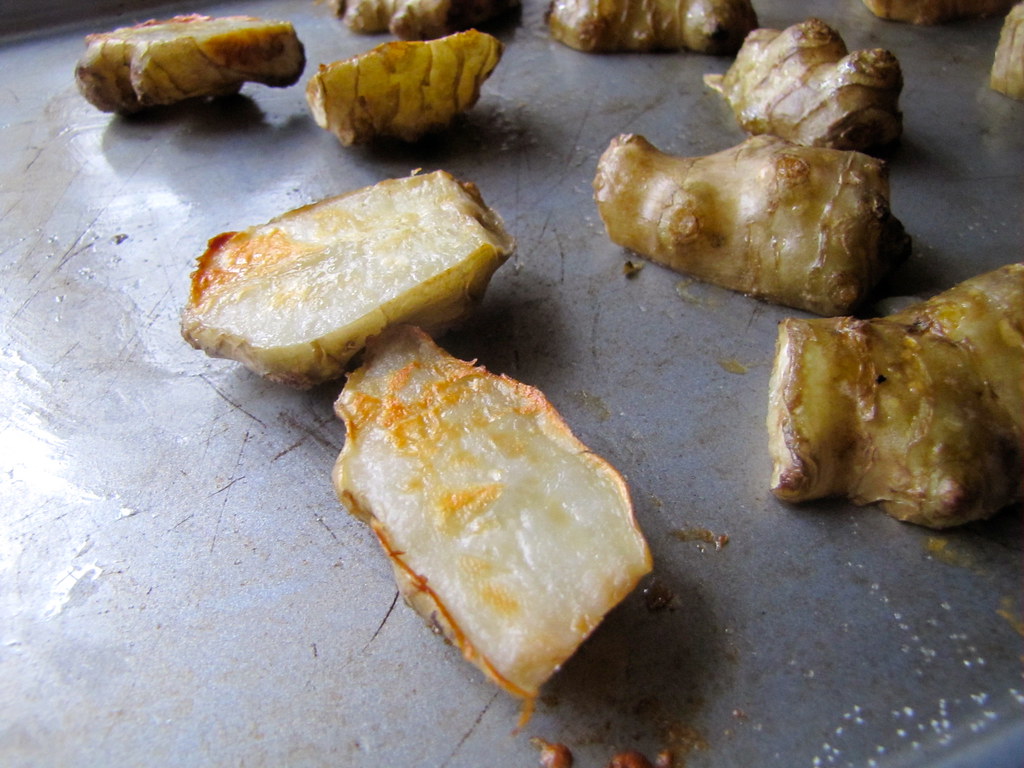 halved and roasted in olive oil until just golden-brown

Alright, I did aim to bring out the most possible flavor from the sunchoke by roasting them, sliced in halves, until just slightly golden-brown. Only then were these softened morsels transferred to a pot of onions and stock to simmer into soup. This step is so easy to do when you have both an oven and stove at your disposal, working at the same times, that I don’t see why anyone wouldn’t. If you have too many sunchokes in your cache to blend into the soup, you can always snack on the crisped morsels, tossed in perhaps a salad or alone. It’s mindless work that earns a great payback, because when you caramelize the inherent sugars in sunchokes, the magnified flavors carry on in whatever application you do next. It’s like not cashing in on the interest of a check if it takes only fifteen minutes to materialize (sweet dreams!).

Finally, this soup was inspired by a series of posts that the good editors at Edamam had chosen to feature from this blog’s archives. You see, Not Eating Out In New York is the blog of choice for the healthy food-focused website for the week. They’ve selected seven recipes from the blog — which tend to spotlight some of the most simple, rustic, yet ingredient-focused and approachable in technique — on its frontpage throughout this week, and I’m honored that they dug them up. In fact, looking through the old recipes, I’m actually eager myself to remake some of them for dinner right now (did I mention that I have a very immediate results-focused mind?). Incredibly, this month also marks a fun little feature that Cooking Light magazine has chosen to run for me: its monthly “Healthy Food Heroes” interview. Check me out in the glossy pages of this magazine on newstands now, and remind me to actually put on some makeup and hairstyling products the next time. Oh, hope it happens!

Preheat oven to 400 degrees. Slice artichokes into halves lengthwise (or wedges) until they’re of equal-sized pieces. Toss with olive oil and a pinch of salt and pepper. Spread out in a single layer on a roasting sheet and roast for 15-20 minutes, or until just slightly golden-browned on bottoms.

Meanwhile, heat 1 tablespoon of butter in a medium pot and add the onions. Sprinkle with a pinch of salt and stir occasionally while sweating over very low heat, about 10-15 minutes. Add the warmed stock, and once removed from the oven, add all the sunchokes. Bring just to a boil then reduce to a simmer and cover. Let cook for 30 minutes to 10 hour.

Blend soup by pulsing in a food processor or pulsing well with a hand blender until very smooth. Taste for seasoning, adding any salt and pepper to taste and the additional tablespoon of butter to stir in. Serve with finely chopped herbs or crumbles of toasted bread (as in photo) or croutons.

Four brownie points: Considering this could be easily mistaken for a cream soup (that is, minimal vegetables and lots of heavy cream and butter), this is a refreshingly healthy alternative that features lots of flavor, and little fats. By using sunchokes primarily for the soup’s body, no added dairy was necessary except for a few dots of butter. This way, I figure you get to taste more of the actual sunchoke, rather than cream or milk or something else to coddle (and perhaps suffocate) its delicate flavor.

Eight maple leaves: I remarked to a friend who I met with just after leaving a less-than-inspiring Greenmarket shopping trip that it had been so “depressing” — the only things I found were merely roots, potatoes, and a few choices of meats. No leafy greens, and very little winter squashes (although I’d grabbed a cheerfully yellow spaghetti squash that I hope to make shine in a recipe soon). Eating might be a little less colorful in the winter, but it suits me just fine right now, actually. I might complain, but at least I’m not overwhelmed and stressed about a bountiful selection, and sometimes, one ingredient, butter, and chicken stock is just what I need.