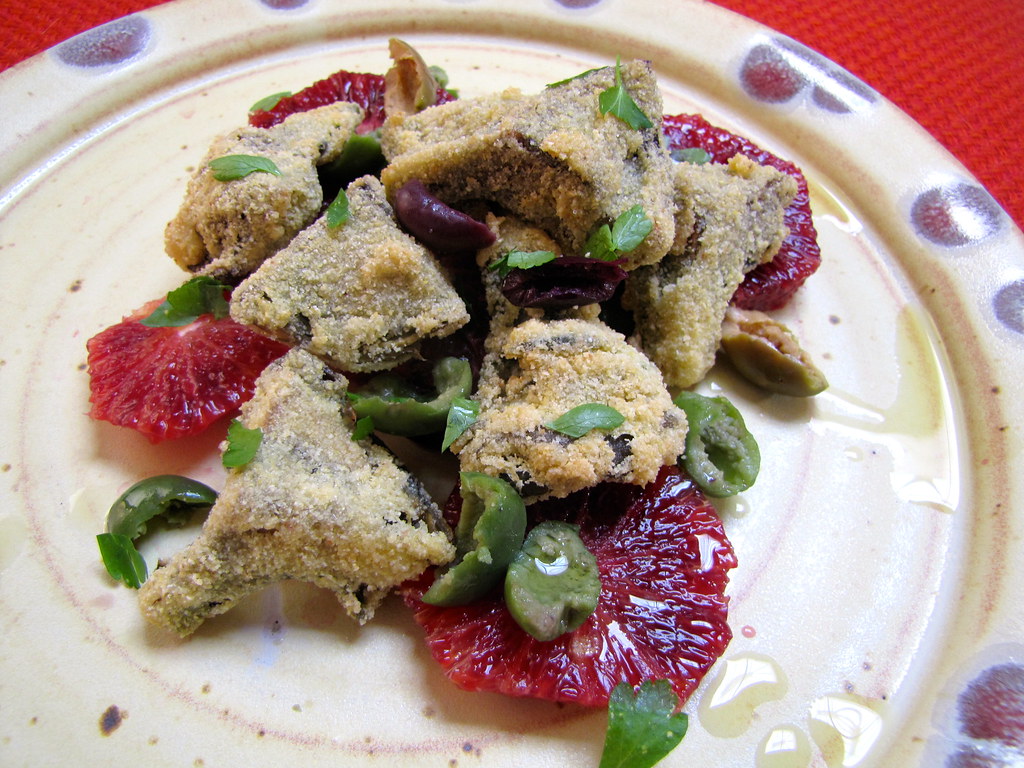 Love is hard. It requires a lot of work, patience, and determination. So is rendering a whole, fresh artichoke into some palatable form. But when you really work at it, give it your best, the artichoke can be a delicious surprise — much more than edible, it’s a tiny miracle of complexity and unique charm. So is a relationship after it’s weathered a few storms. Once you peel back all the fuss and layers of each, you’ll find that all that really matters is in the heart.


Happy Valentine’s Day, food lovers. I thought I’d make the most aphrodisiac, date-worthy dish du jour. Asking so many people what they think qualifies for this on my podcast, Let’s Eat In, over the years, quite a few have turned the question back around at me. I usually stammer and dodge it, except on this particular holiday, through recipes on this blog. 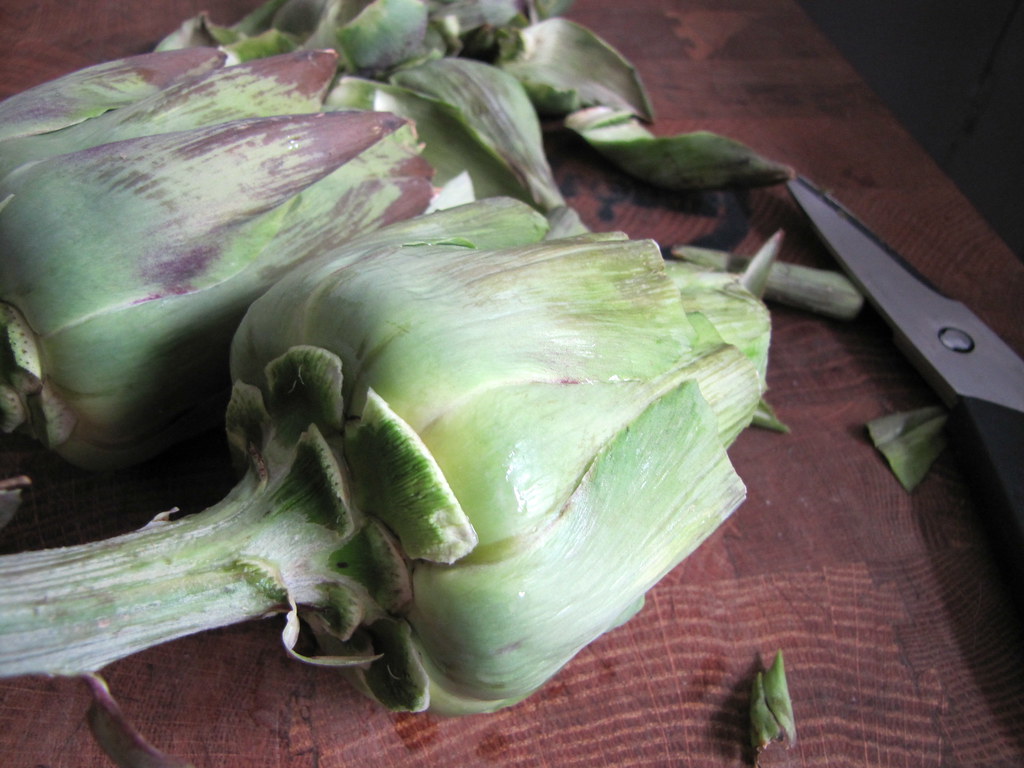 Artichokes are not to be found grown in the Northeast in February, but I really didn’t feel like cooking up another turnip or potato today. That did not fit into my grand scheme of aphrodisiac-themed amazement. Maybe artichokes hearts seem a strange choice, a bit sharp-tasting and lizard-green, but these flowering plants have been fabled to be aphrodisiacs — especially for women — for a long time. Ancient Greeks and Romans considered them to be delicacies and aphrodisiacs with fertility-enhancing powers. There’s even a legend of a would-be Greek goddess, Cynara, who, having shied away from Zeus’ cavalier advances, was transformed into an artichoke back on earth. 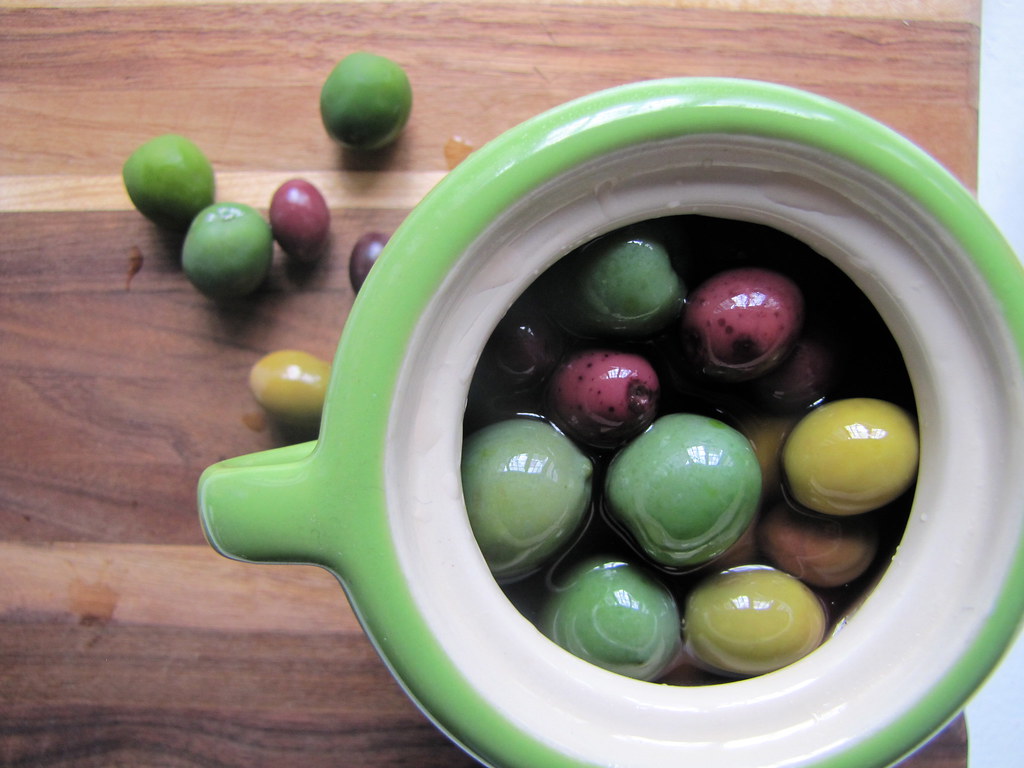 Our pals Zeus and Co. in ancient Greece were also quite enamored by olives. Not to get too tied up in myth — there is a lot of it — olives, olive trees and olive oil were sacred. We get the phrase “to give an olive branch,” or an offering of peace, from ancient custom. I think that modern chefs of the Western world pay special attention, bordering on worship, to the olive oil used in their kitchens all the same. Olives are also one of the top foods you’ll find in a search for “aphrodisiac.” I chose to use a variety of green, brown, black and purplish olives in this dish, to appreciate their many forms. 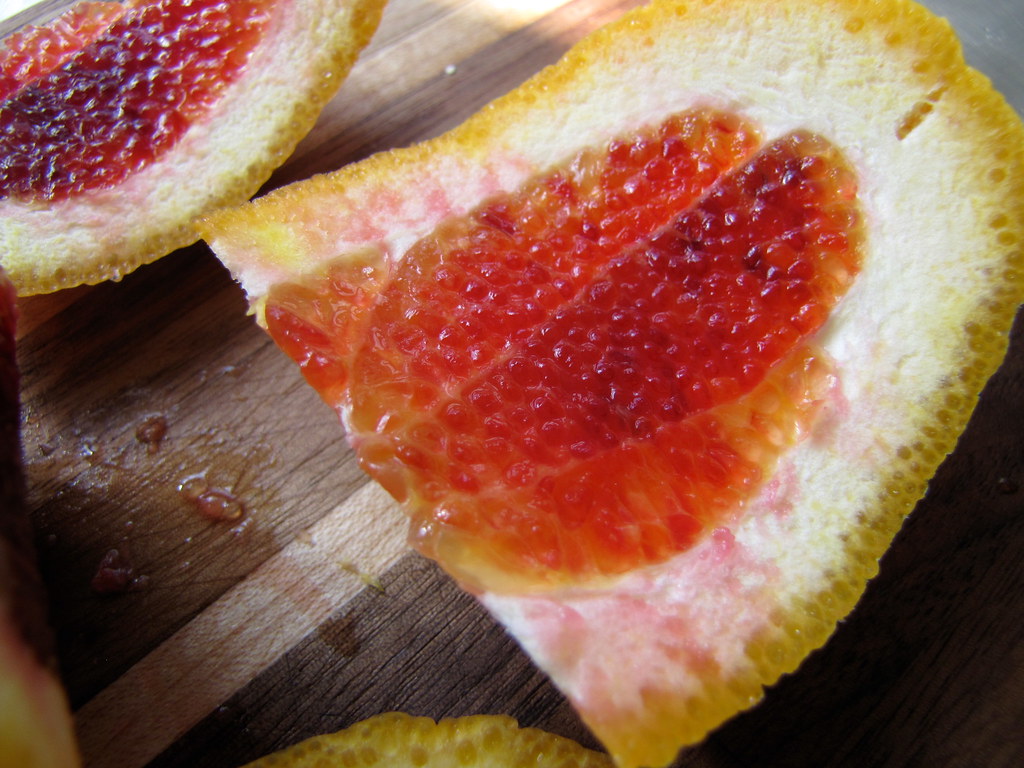 Finally, we’ll need something red and luscious in this Valentine’s Day dish. This might be a juicy, rare steak, or perhaps a sprinkle of pomegranate seeds. I cut into a winter citrus fruit recently, and it bled all over my board. This intense and very sexy fruit is of course the blood orange. I had to use it here somehow. 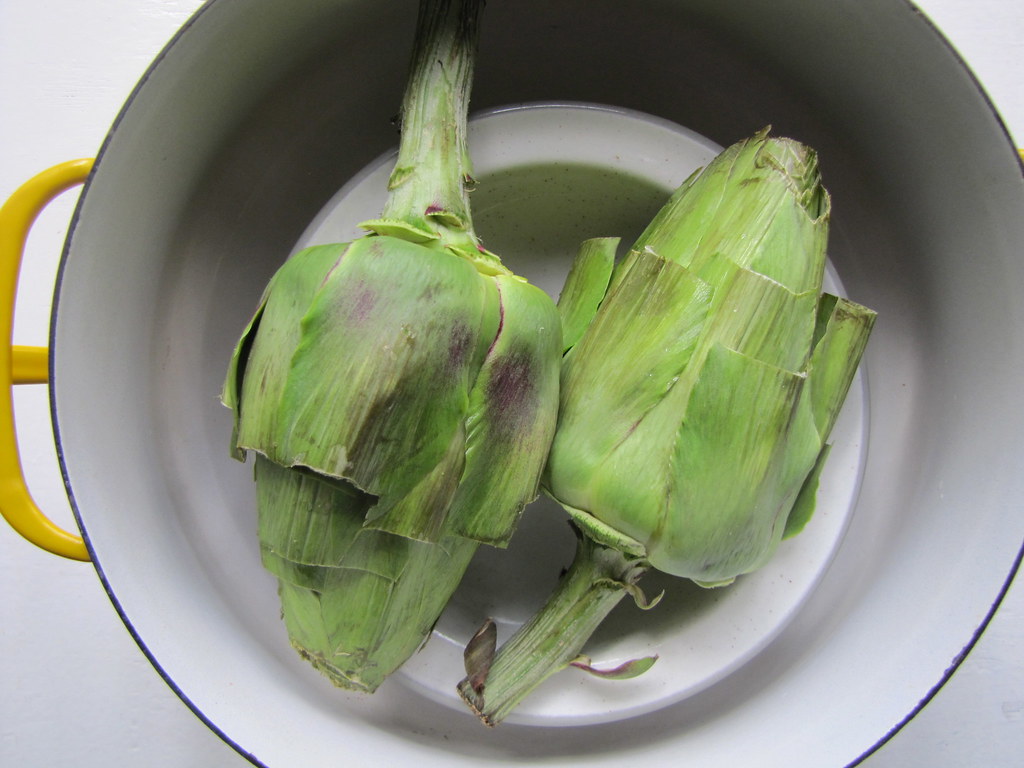 I’d considered using a jar of marinated artichoke hearts and frying them in a simple egg wash and cornmeal dredge like I’d wanted to do here. But these preserved hearts, while tasty, seem too soaked-through to get a good result from this. And I thought it would be too facile to simply toss them straight from the can into a salad. So I went the tough route of snipping, peeling, steaming, shucking, and scraping whole artichokes in order to get at their hearts, and then fry them. It’s a little annoying, but the effort truly pays off. 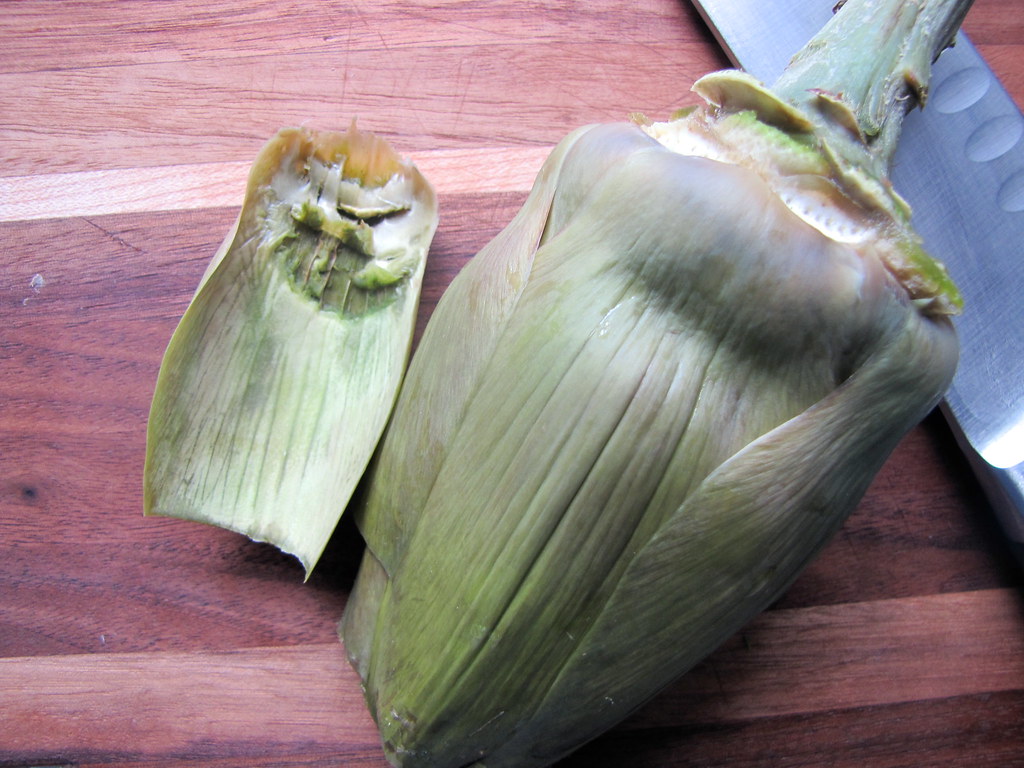 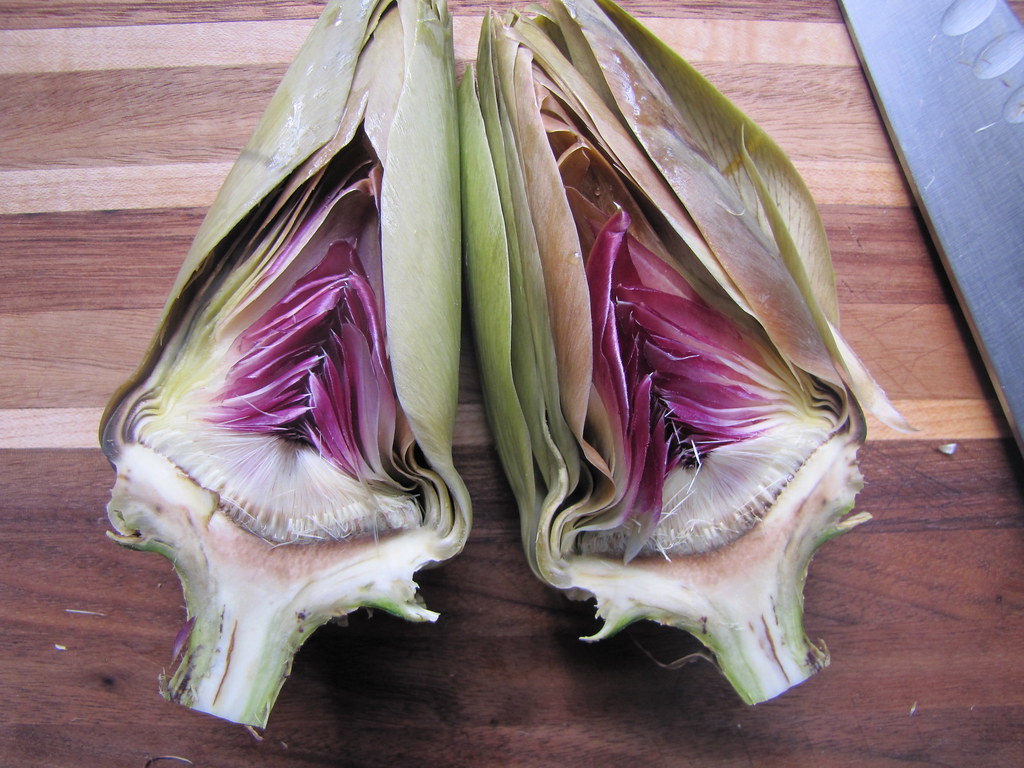 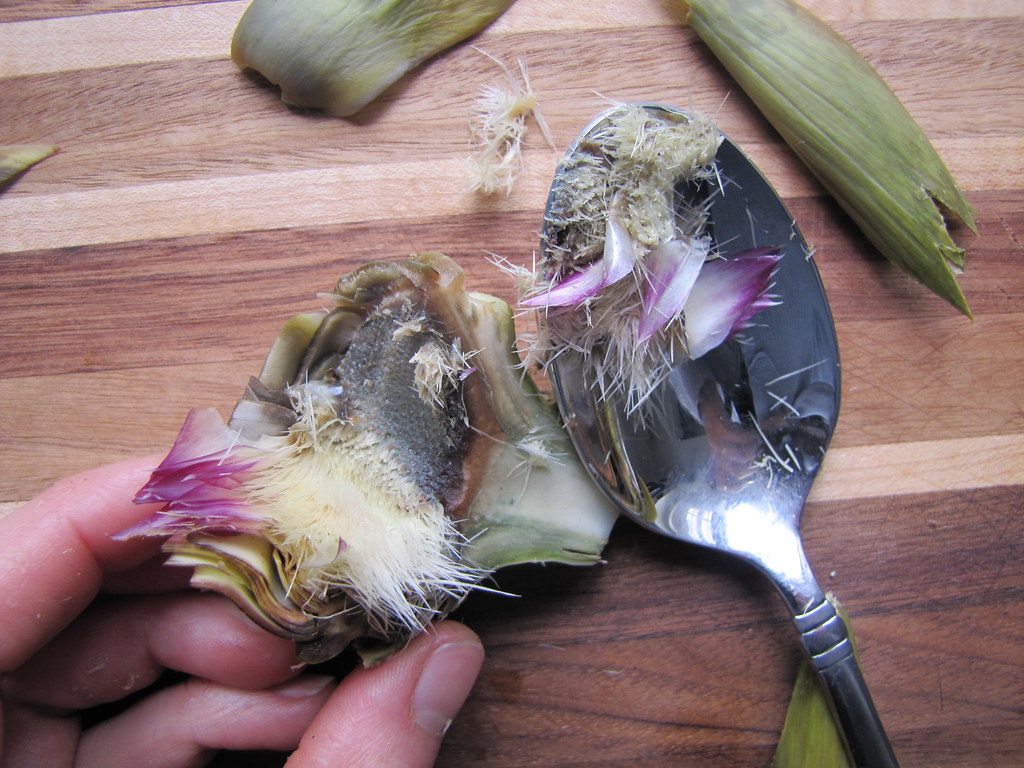 There’s not much you can do with the steamed petals that become palatable at the base. While you’re trimming away the fully steamed artichoke, you can reward yourself a small snack by scraping this softened flesh from the tough fibers with your teeth. Steaming artichokes and laboriously picking at it like this will make it seem like there’s an incredible amount of waste for just one tiny heart. There is. So accept the considerable challenge for the seemingly small but worthwhile (in my opinion) end gain. 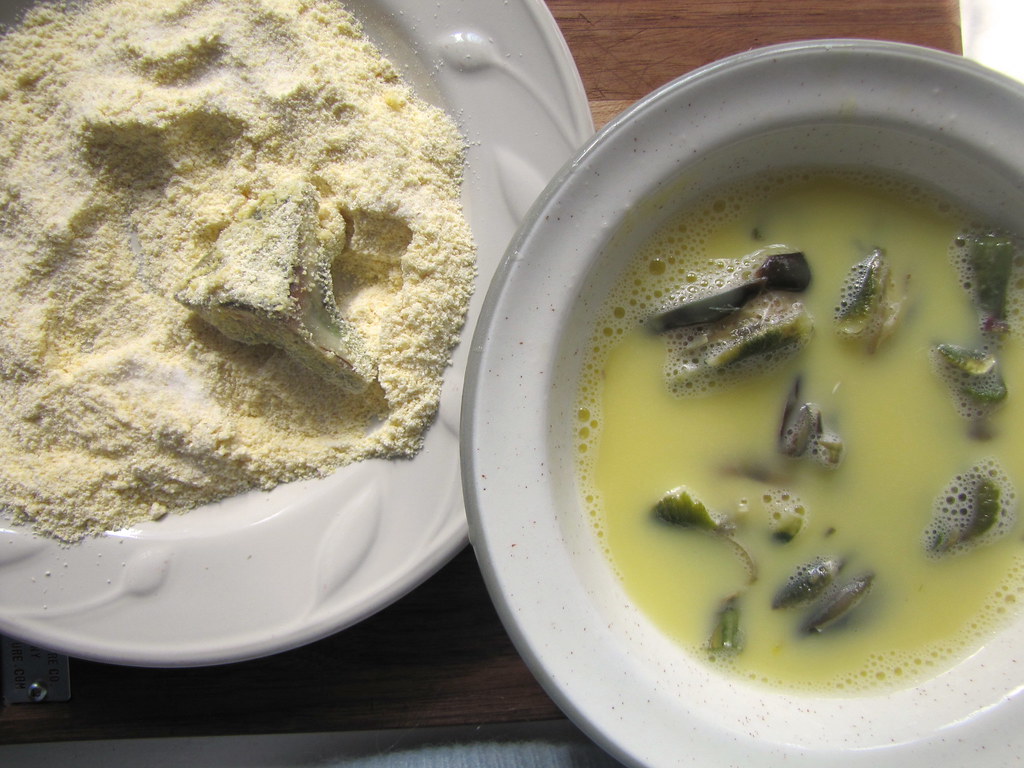 Once every prickly and fuzzy inedible piece had been trimmed, I heated up some oil (about 1 inch deep in a small pot). The hearts were cut into quarters with a considerable amount of its edible stem still attached (they taste fine) before bathing in some egg wash and getting a cornmeal-and-salt coat. I’m not sure why I’ve never tried this before nor have seen it done elsewhere (though I’m sure it has been). Fried artichoke hearts from freshly steamed artichokes are amazing. They could provide some crispy, fried fun to any salad. But combined with tart blood oranges, piquant olives, and some nice olive oil as the “dressing” alone, they were exciting, colorful, and sort of complicated. Just like your romance, right?

Tear away a handful of the bruised and dried-out outer leaves from each artichoke. Snip off the sharp, pointy tips of each petal with scissors. Heat up water in a large pot (or steamer) and place artichokes in a bowl that fits inside the pot with a lid. Steam artichokes for 20 minutes. Remove and let cool.

Strip away several more leaves, inspecting eating those that become softer and no longer fibrous at the bottom. Once the remaining petals around the base of the flower are soft and palatable, slice the choke in half lengthwise (you may need to slice only at the base, then rip apart the top part of the choke, as the petals are very tough and resist being cut with a knife). Trim away the purple leaves and scrape off the fuzzy stuff from the tiny piece of softened flesh and stem at the base. This is the heart. Once cleaned up, chop the heart into quarters.

Heat the oil in a small pot until very hot and beginning to pop or sizzle. Reduce heat to medium-low. Beat the egg in a bowl with about 1/2 cup of water, and a pinch of salt. Combine the 1/2 teaspoon of salt and black pepper with the cornmeal and spread on a flat plate. Dip the artichoke wedges into the egg wash, then coat fully with the cornmeal mixture, shaking off any excess. Fry (working in batches if necessary) until just turning golden-brown (this should only take about 1-2 minutes, and you may want to flip each one once to submerge each side). Transfer immediately to paper towels and sprinkle with a touch more salt.

Slice the base off of the blood orange. Placing the cut side-down on a board, cut the peel off the flesh so that there’s no pith or white stuff on its sides. Slice into rounds. Arrange on two plates. Smash the olives with the side of a knife and remove the pits. Chop coarsely and sprinkle around the plate. Top with the fried artichokes, and the optional parsley. Drizzle with good olive oil, and serve immediately.

Five brownie points: This enticing appetizer is sure to whet your appetite for something wonderful without killing your caloric count — and giving you a major vitamin boost. Fresh blood oranges are powerful antioxidants with slightly less sugars than most oranges. Artichokes are also rich in phytonutrients and antioxidants, a good sign why they were cultivated so long ago (and even despite their lengthy preparation). With fiber and protein included in the well-rounded portfolio of benefits, and plus a little fresh parsley for some Vitamin K, this healthy salad is every bit worthy of being called just that. There is a deep-fried element to it, which adds some fat calories, and some high-in-sodium brined olives, too. These stand in for an actual dressing for the salad, since their contrasts and flavors are so punchy alone.

Three maple leaves: We had to go non-local to get pretty much every ingredient used here, except for the trace bits of parsley and that egg and cornmeal. Grown in California, each element — artichoke, olive and citrus — are winter treasures from afar that I like to reserve for special occasions, or whenever I just need something bright.