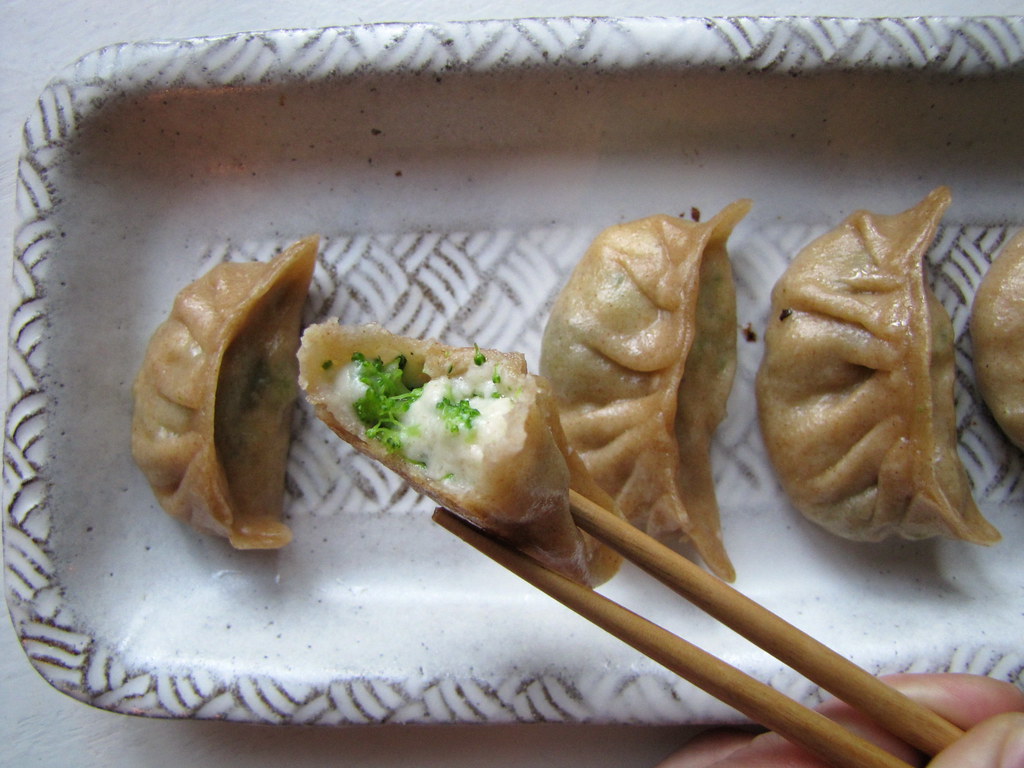 So maybe you consider yourself an aficionado of Chinese dumplings. Maybe you’re a sucker for hearty, all-American food, too. Maybe you’re just searching for a vegetarian dumpling filling that isn’t a mosaic of brown-green ingredients with an ultimately bland, nondescript taste (mei wei dao! if you speak Mandarin, that is). In actuality, you don’t need to hail from any of these persuasions to enjoy the unexpected delight of these dumplings — because it’s so unexpected yet delicious.

In the past decade or so, we’ve seen a gradual acknowledgement of the fact that so much of Chinese restaurant food in America is actually “Americanized Chinese food” — that is, stuff fashioned only in the States that speaks to the tastes and familiarities (and utilizes the foods) of its new land. To thank for that, we have writers such as Jennifer 8. Lee of The Fortune Cookie Chronicles and my latest guest on Let’s Eat In, Diana Kuan of The Chinese Takeout Cookbook. No doubt, “weird Chinese food,” as he is wont to call it, is cooler than ever thanks to variously influenced chefs like Danny Bowien of Mission Chinese Food (and a previous guest on my show) as well. While this is happening, I wonder if you couldn’t instead describe this dish as “Chinesed American food,” because it features a familiar archetype of American cuisine (broccoli cheddar soup), but in a Chinese context (inside a pan-fried dumpling, or jiaozi). 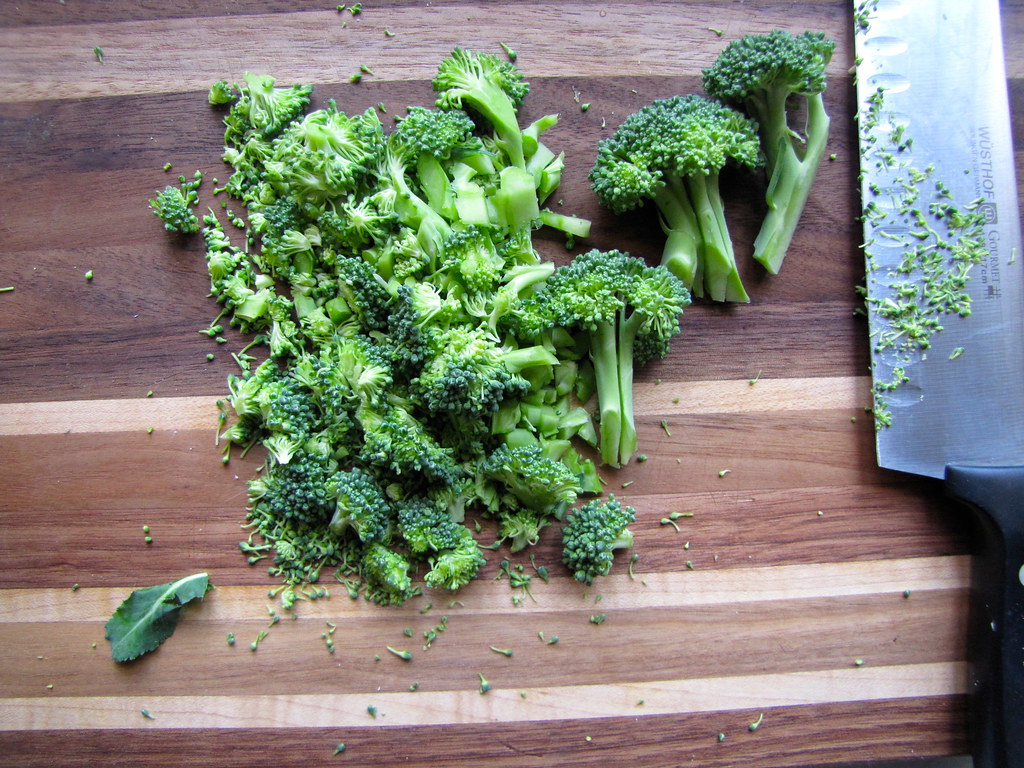 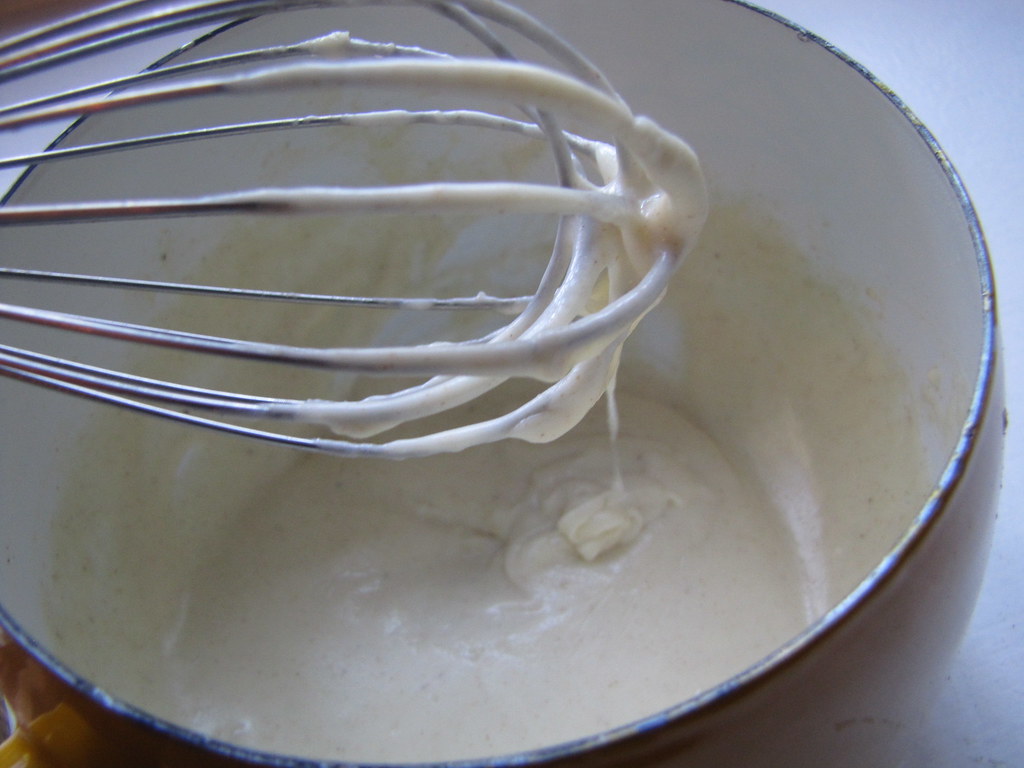 a bechamel sauce is whisked from butter, flour, and milk


If you’ve followed this blog for a little while, then you may have come across the other similarly-themed dumplings as this, such as the “cheeseburger,” the “apple pie” (with bourbon caramel sauce), and the “hot dogpling,” the latter of which was forged for a charity hot dog cook-off. I have entertained students of my Chinese dumpling cooking classes to strange versions with asparagus, feta and mint, and broccoli, sundried tomatoes and parmesan. While these are tasty, they don’t quite hit the same bulls-eye of East-meets-West-with-aplomb as this, in my opinion. I’ve actually perfected the recipe for these broccoli cheddar dumplings almost a year ago, but kept it to myself and a small ring of friends who gave feedback on those rare occasions. 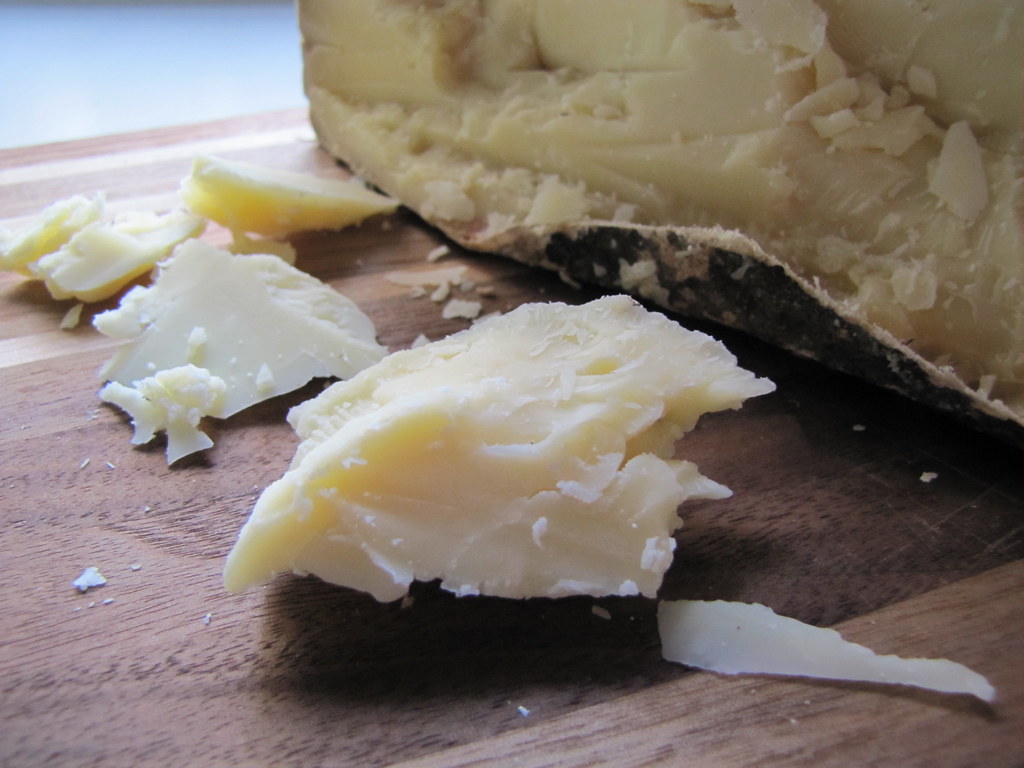 aged cheddar is chopped up to season the sauce appropriately 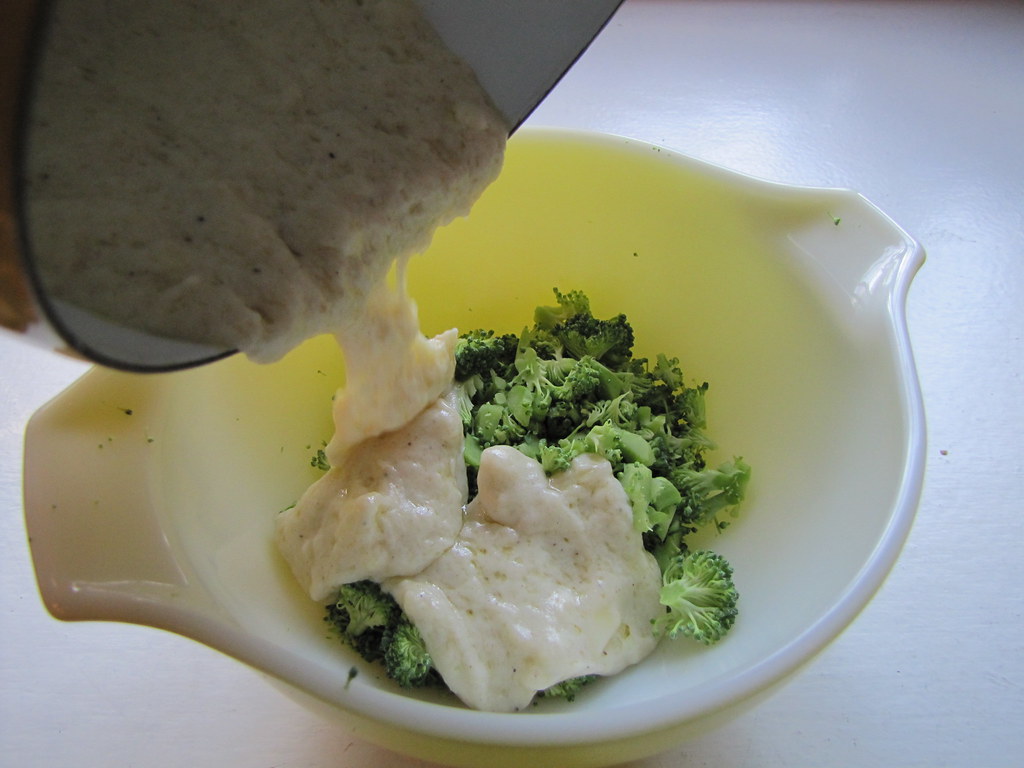 and poured over the broccoli once slightly cooled


To achieve it, I made sure that the filling was a solid mixture when cold — a bechamel cheese sauce studded with raw broccoli pieces and shredded cheddar cheese — but would become sublimely soup-like once it was heated through inside the dumpling wrapper on a pan. It echoes the techniques of Shanghai-style “soup dumplings,” which are jellied aspic with meat once rolled into the dough cold, but explode with thin, hot “soup” once they’re heated through in a steamer basket. This solid-then-soup configuration is ideal for a vegetable dumpling, because you can have those veggies totally raw and only cooked once it’s inside the wrapper to become just crisp-tender, and have the filling be one maleable ball and hence easier to fold into a fresh, sticky dough wrapper.

I’ve encountered the same problem over and over with other dumpling fillings that had no meat: it takes a lot more nimbleness of the fingers to make the wrapper close around the chopped-up salad of stuff. I don’t think it’s an easy task for the beginner dumpling-maker, although it’s far from impossible. When your filling doesn’t congeal into an easy ball, then you invariably end up with a not-very-fully-stuffed dumpling because that’s easier to seal. Then the air shrinks out of that not-so-full dumpling during cooking, weakening its appearance to that of a prune, and if they’re mostly fresh vegetables, the liquid leaks out of them, and weakens the seal on the dough causing more likely ruptures, too. 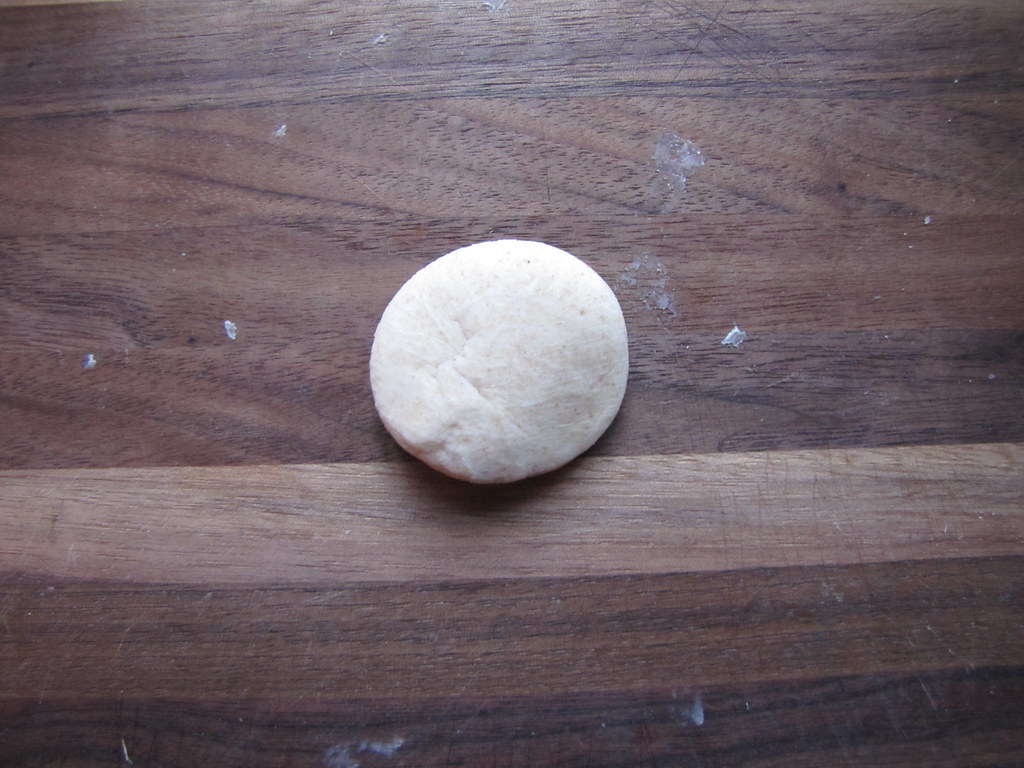 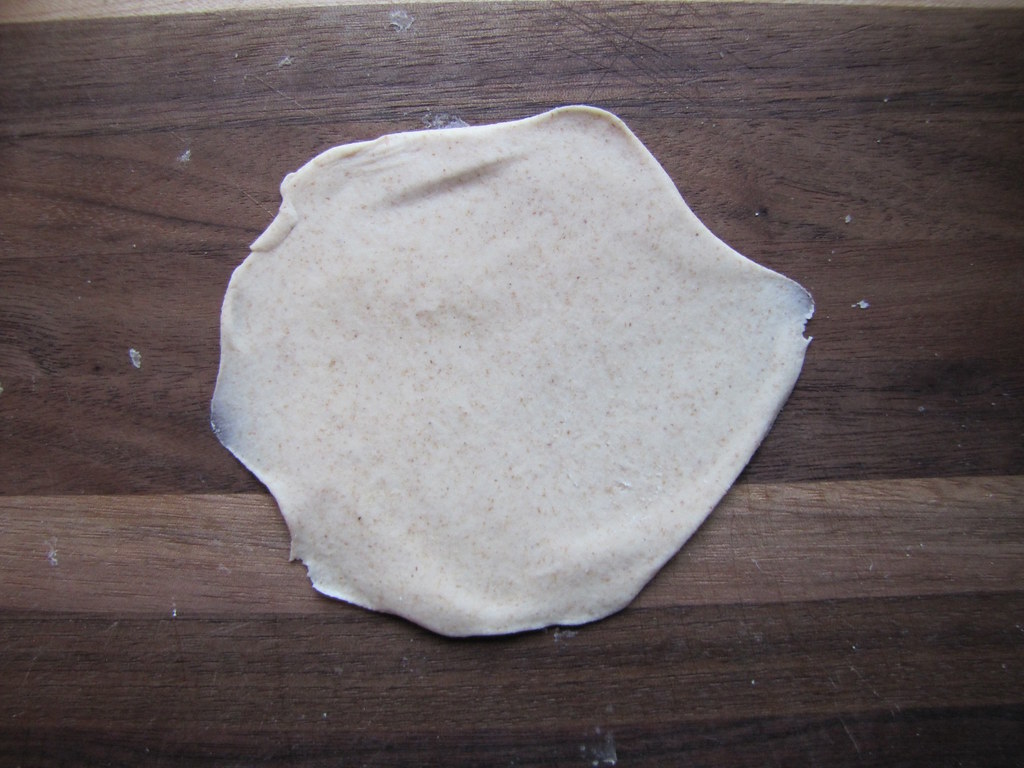 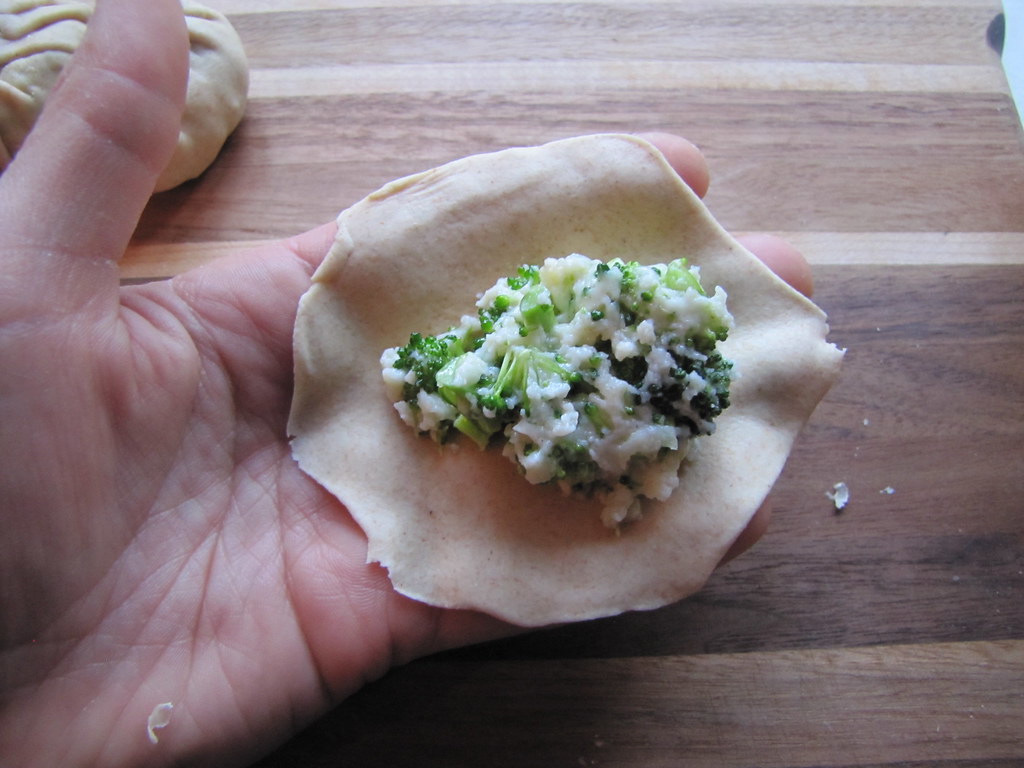 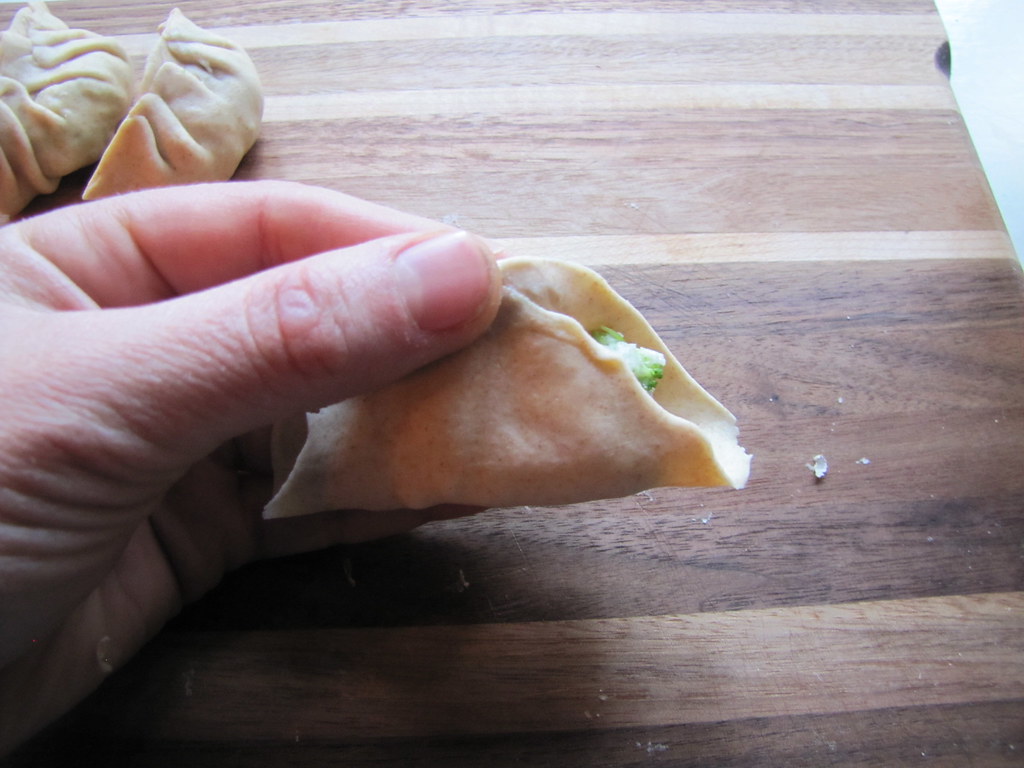 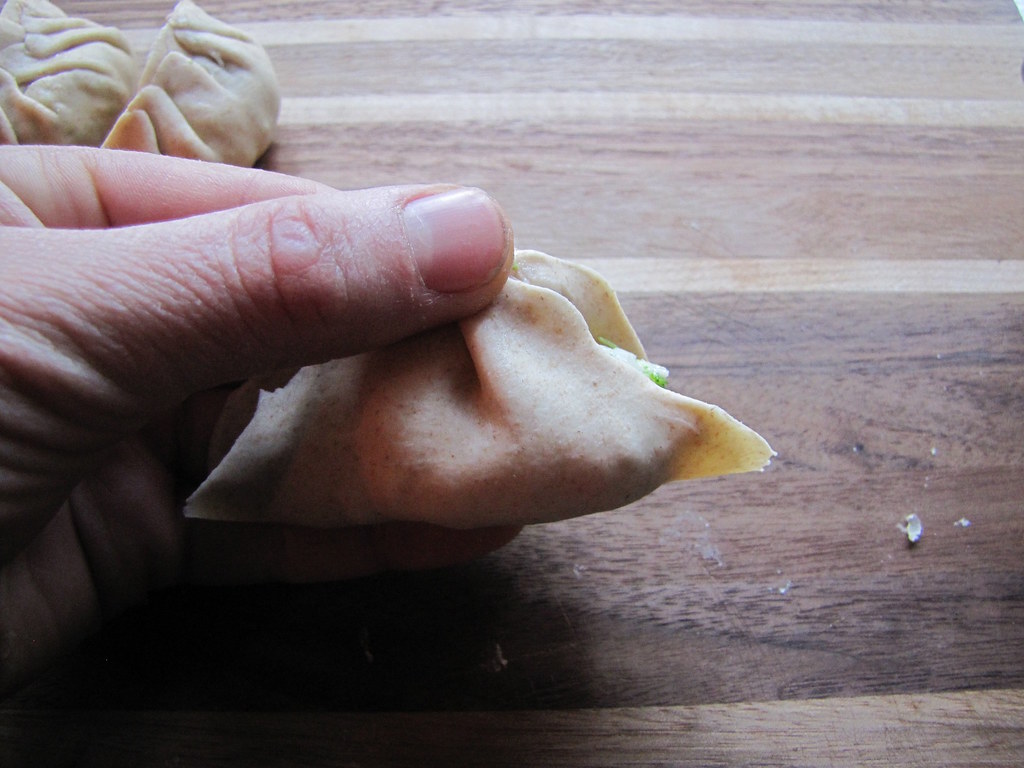 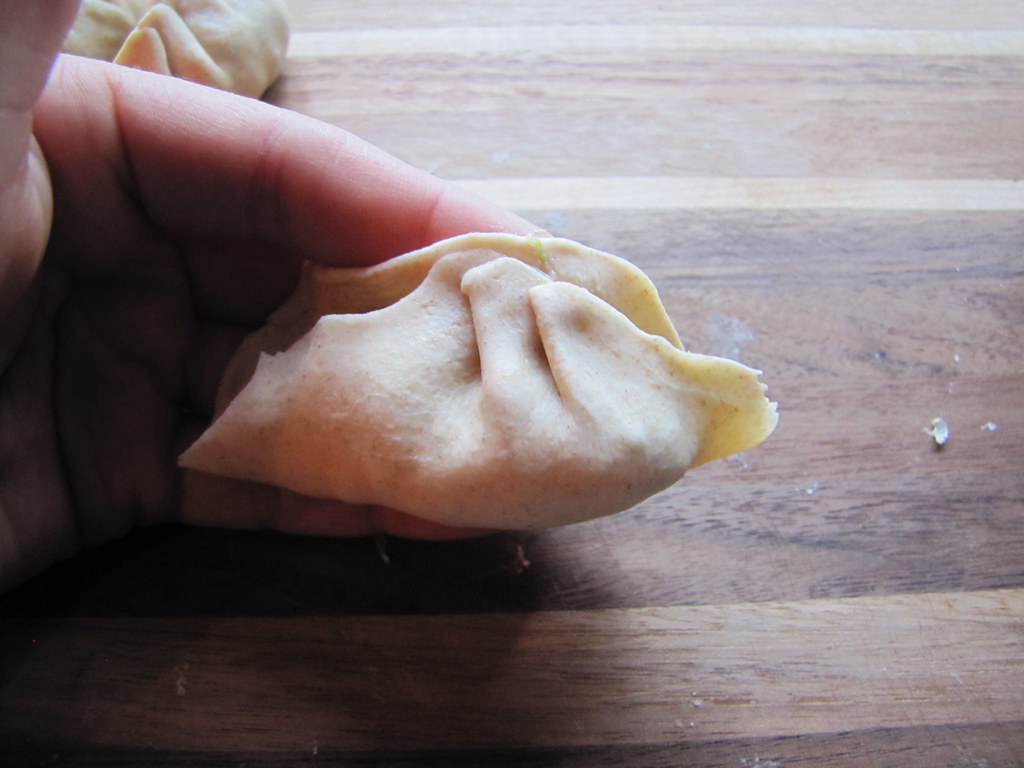 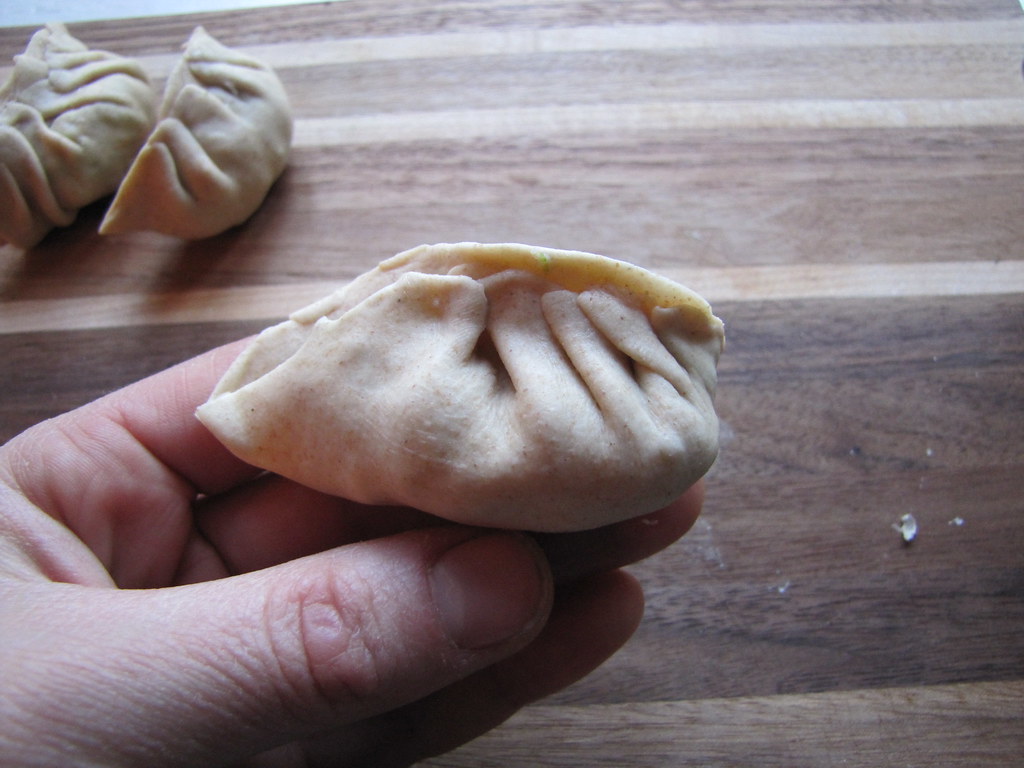 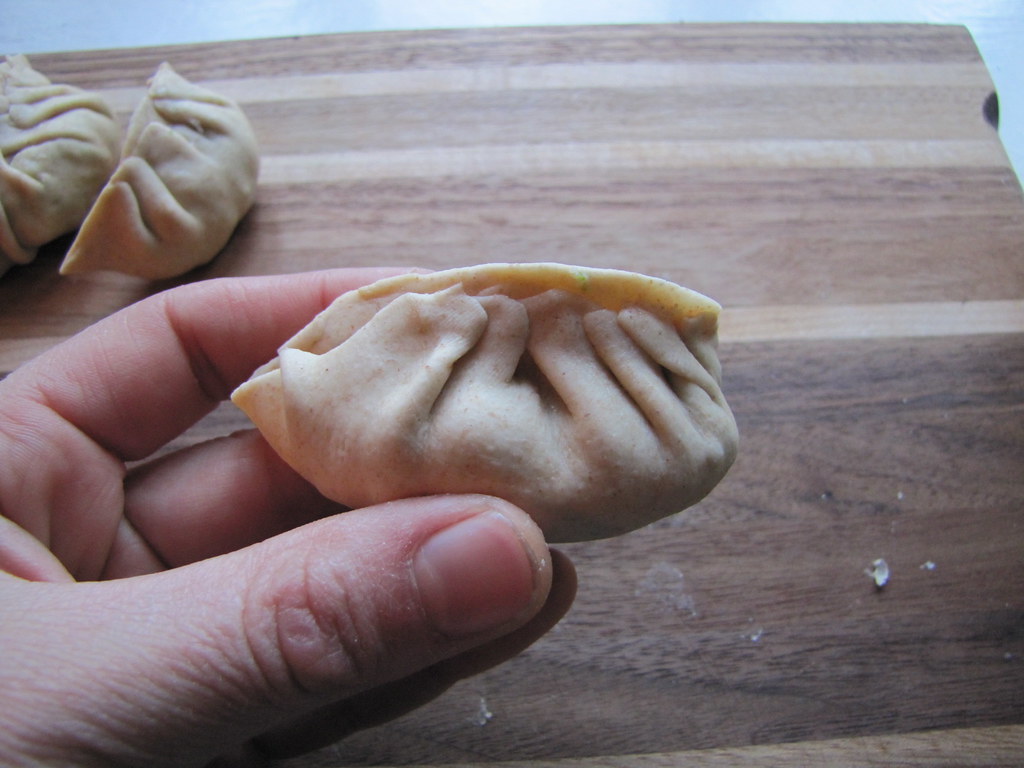 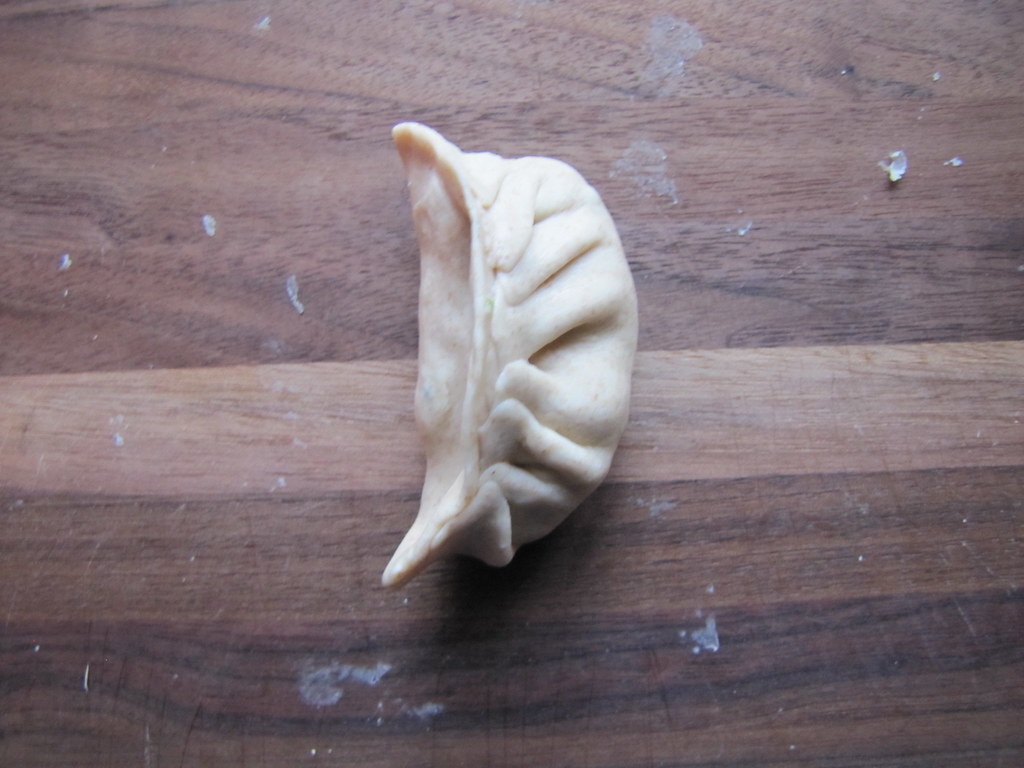 a mini-guide on how to roll out, stuff, and fold dumplings in the Chinese potsticker style


Let me tell you that my first attempts on the broccoli cheddar dumplings involved finely chopped broccoli and shredded cheddar as the filling alone. But after learning to make (many!) Spanish croquetas with my friend Andrew Gottlieb over last summer for his “Tapas Shack” stand, I gained a real appreciation for the solid-then-soft trickery of the classic bechamel sauce. In croquetas, simply butter, stirred with flour in a roux, and whisked for a longer time with milk, becomes a thick, mushy mass almost like mashed potatoes in consistency. Then you add to it some finely chopped Serrano ham, and coat it with egg wash and breadcrumbs before deep-frying. The thing is oozing and awesome when it’s served, but it’s an intact piece to work with. 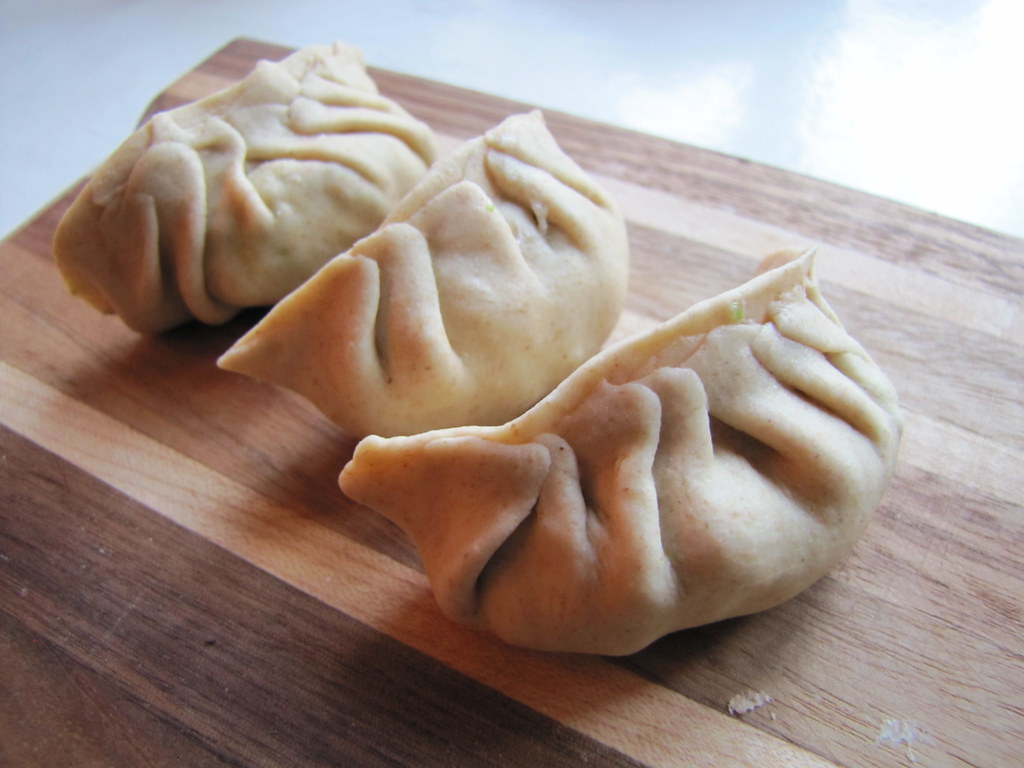 In this recipe, I’ve tapped one of the “mother of French sauces,” bechamel, then made it a Mornay sauce by adding some shreds of sharp white cheddar (you can use any variety you like but those curds in the photos are cut from an enormous wedge of Bleu Mont Dairy’s bandaged cheddar, where the cheesemaker is a chum of my boyfriend’s). The mixture is cooled some before folding it into finely chopped broccoli. Once that mixture is cooled even more, it can be scooped easily into balls for placing inside dumpling wrapper rounds. 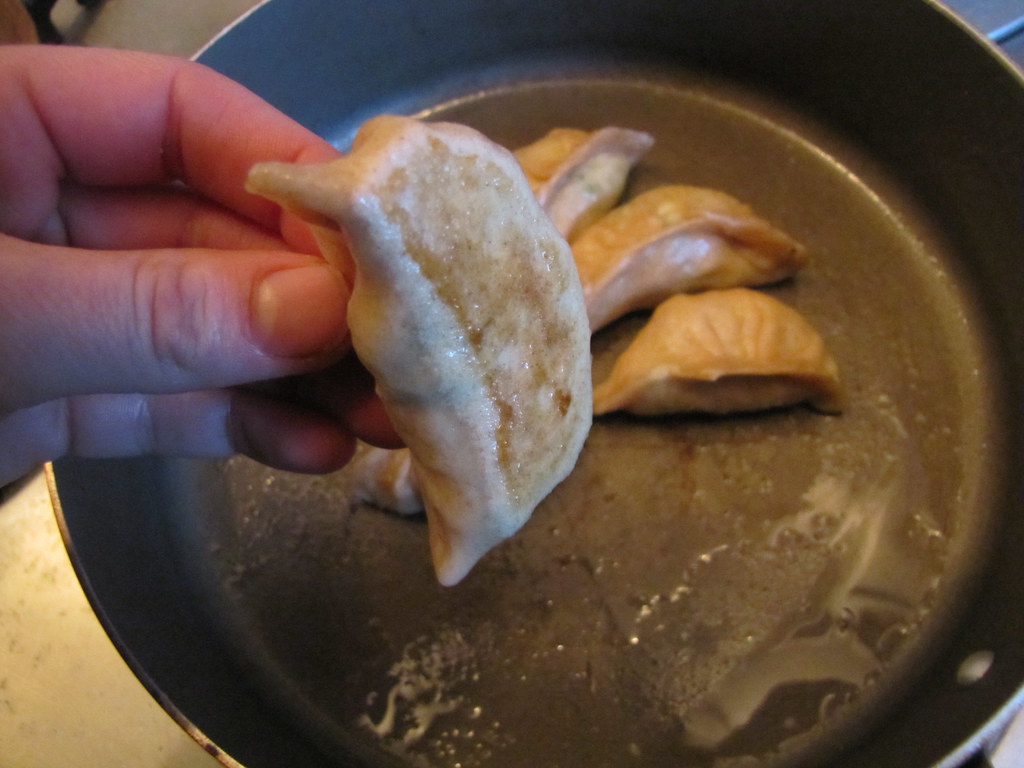 waiting until the dumplings have slightly browned before adding water, and covering the pan to steam through 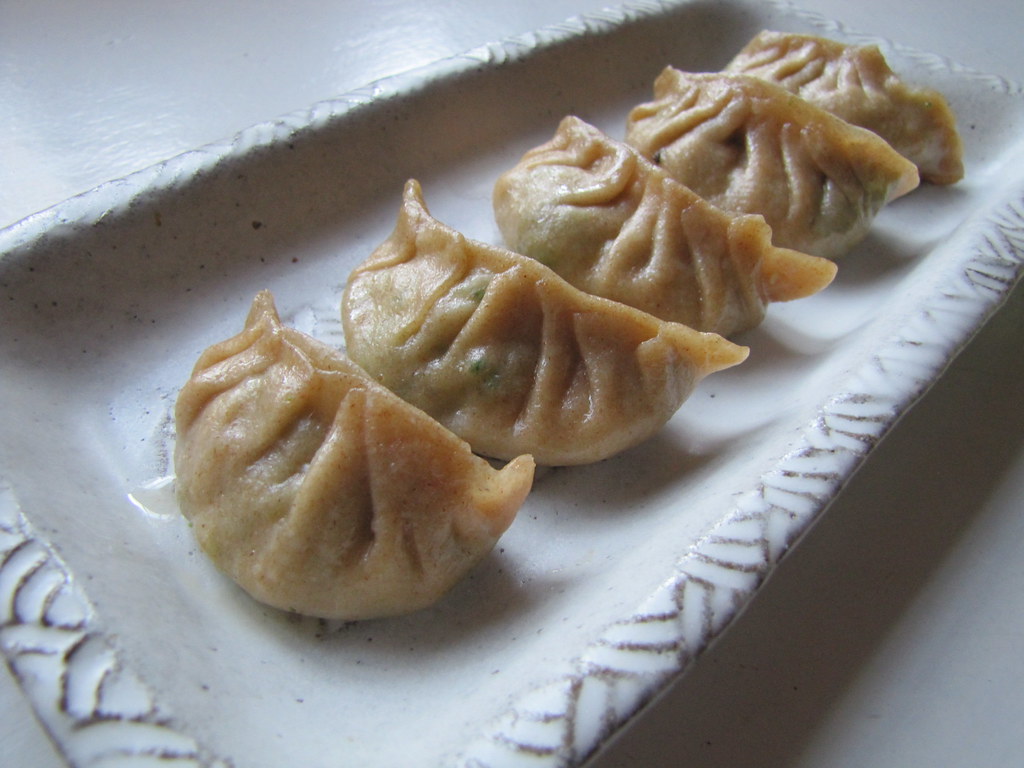 For those dumpling wrapper rounds, you can buy store-bought, pre-made dumpling wrappers (just make sure you get white, round ones whose ingredients should just be flour and water). If you’re making them from scratch, as in this complete recipe, use all-purpose flour and proceed — I know that it looks from photos like I’ve used whole wheat flour, but it’s actually Cayuga Organics’ “all-purpose” flour, which is evidently more dark or wholesome-looking than most. (It worked just fine, however, in terms of kneading and rolling out.) I’ve included a little step-by-step photo tutorial in folding them here, and plan to schedule some more of those dumpling classes if you’re looking for more in-person guidance, too. Finally, I’ve made such a small portion in these photos not for lack of enough broccoli, bechamel or dough ingredients at all, but because I was chasing the sunlight on a weekend afternoon, and things had to happen now or another day for clear photos. Ideally, you should make a double-portion of the recipe below and freeze some, uncooked, to take out and pan-fry for a rainy day. 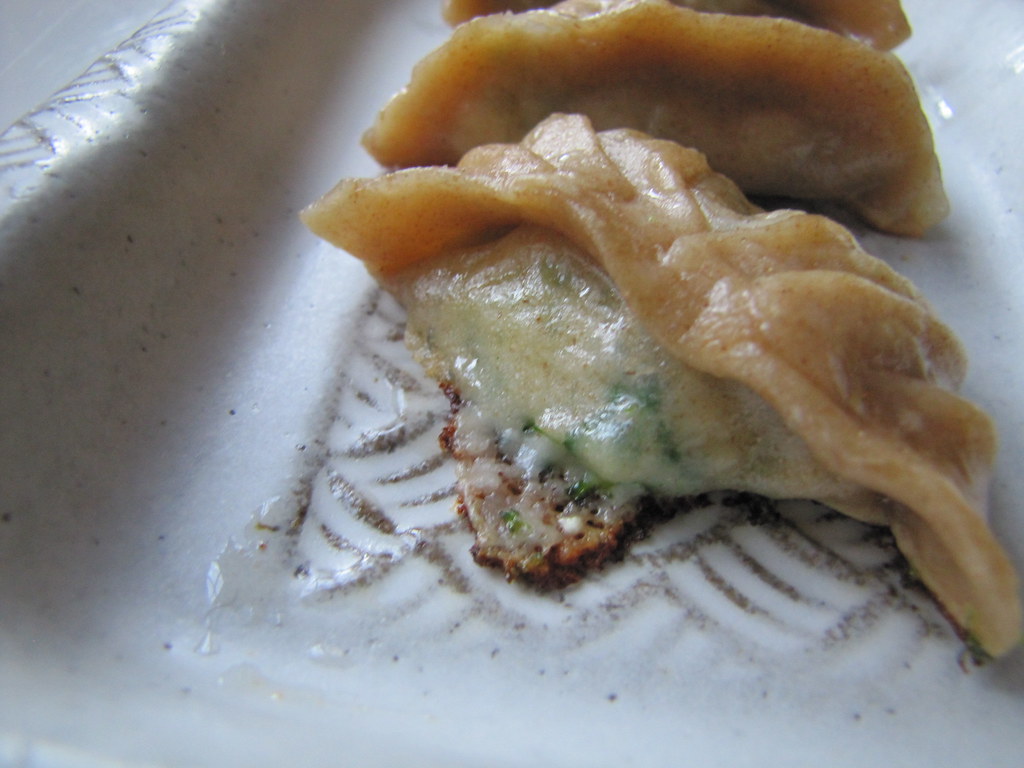 even a little oozing on a pan is not such a bad thing!

for the dough:
1 cup all-purpose flour
1/3-1/2 cup water
*alternately, skip instructions on stirring, kneading, and rolling out dough and use pre-made round dumpling wrappers

To make the dough, place the flour in a large bowl and stir in the water. Mix until until dough just comes together (you can adjust with more flour or water if necessary). Turn onto a lightly floured surface and knead dough for 5-6 minutes, until its surface feels smooth. Let rest for at least 10-15 minutes, covered with plastic wrap.

Heat the butter in a small saucepan and once it begins to bubble, stir in the flour. Let cook on very low heat, stirring frequently, for 5-6 minutes, or until the roux becomes golden-brown in color. Meanwhile, heat the milk in a separate saucepan until just scalding-hot. While stirring or whisking the butter mixture, slowly drizzle in the hot milk. Stir constantly to incorporate the milk, about 2 minutes, and then make sure heat is low enough to ensure a very slow, yet steady bubble (on medium-low) and continue whisking for about 10 minutes, or until the mixture is about the consistency of thick gravy. Let cool at least 10 minutes. Then fold in the raw chopped broccoli, as well as salt and freshly ground pepper to taste. Cover and let chill at least 30 minutes or until well-cooled (can be refrigerated overnight).

Take a small piece of the rested dough that’s about the size of a teaspoon and flatten it on a lightly floured surface. Using a rolling pin or any flat, sturdy cylindrical object (I recommend an empty beer bottle), roll it out into a sort-of round-shaped piece about 3-4 inches in diameter. Add a tablespoon-sized scoop of the cooled broccoli filling mixture in the center of the round. Found the round to make a seal from the furthest point at opposite ends, and holding it like a taco with your fingers pinching the center, begin making smaller pleats along the right-hand side of the center pinch, until you reach the end of the wrapper. Then begin making smaller pleats along the left-hand side of the center pinch, until you seal up the other side of the dumpling. Smoothen out the top ridge of the dumpling and sit it flat on its bottom to create the correct, crescent shape from a birds-eye view. Note that when using freshly homemade dumpling wrappers as opposed to store-bought sheets, the dough will be more malleable and will ultimately bend to however you wish to shape it. Once cooked, both types of wrappers will have become more uniform in shape and appearance once they are bloated up during steaming.

To pan-fry the dumplings, heat the oil in a wide skillet and once it’s just hot, arrange the dumplings in a fan-like array. Let cook over medium high heat until the bottom of the first dumpling placed down is just beginning to turn golden-brown. Add about 1/2 cup water to the pan and immediately place on the cover. Increase heat to medium or medium-high and let cook for 3-4 minutes. If you hear or smell any deep browning effects from inside the pan or the screech of a completely dry pan, open it and add another splash of water before closing it quickly again. If, after 3-4 minutes, you open the pan to find the dumplings looking very white, soggy, and the water’s not yet cooked off, keep the lid open and let cook until the water has evaporated. Once finished, the skin of the dumpling should appear opaque rather than raw and whitish, and the bottoms of the dumplings should be dry and golden-brown. Transfer immediately to a serving dish and enjoy.

Cost Calculator
for 1 dozen, or 1 main course or 2 appetizer-size servings

Six brownie points: I have no illusions about the healthfulness of a dish just because it’s vegetarian rather than not. I made this dish with the intention to entertain the palate, and that’s just what it does, but in the context of a much-loved vegetable (and cheese) formula of American eating. It is not — despite the fact that Cayuga Organics’ all-purpose flour looks like whole wheat, as mentioned above — a health-food recipe, but a fun riff on a savory classic or side of Chinese dumplings. Given that, it is fairly balanced approach for with its hearty portion of lightly cooked broccoli, which is a superfood loaded with vitamins and minerals. It does have its share of cholesterol and fats from the dairy, however I like to use broccoli in greater proportion to the average spoonful of broccoli-cheddar soup here.

Seven brownie points: We’re nearing the time when you can no longer find late-fall specimens such as broccoli and cauliflower from farms nearby NYC. But for the time being, seize the heads that are still standing. Thankfully, there’s always going to cow’s milk to make local cheese and butter from year-round, wherever you are, and in Upstate New York, we’re lucky to have a few new areas of renewed grain production these days, which is how I got my not-so-refined all-purpose flour. This is in any case a year-round staple that can be kept indefinitely in your pantry, a great vice in colder, bleaker months.