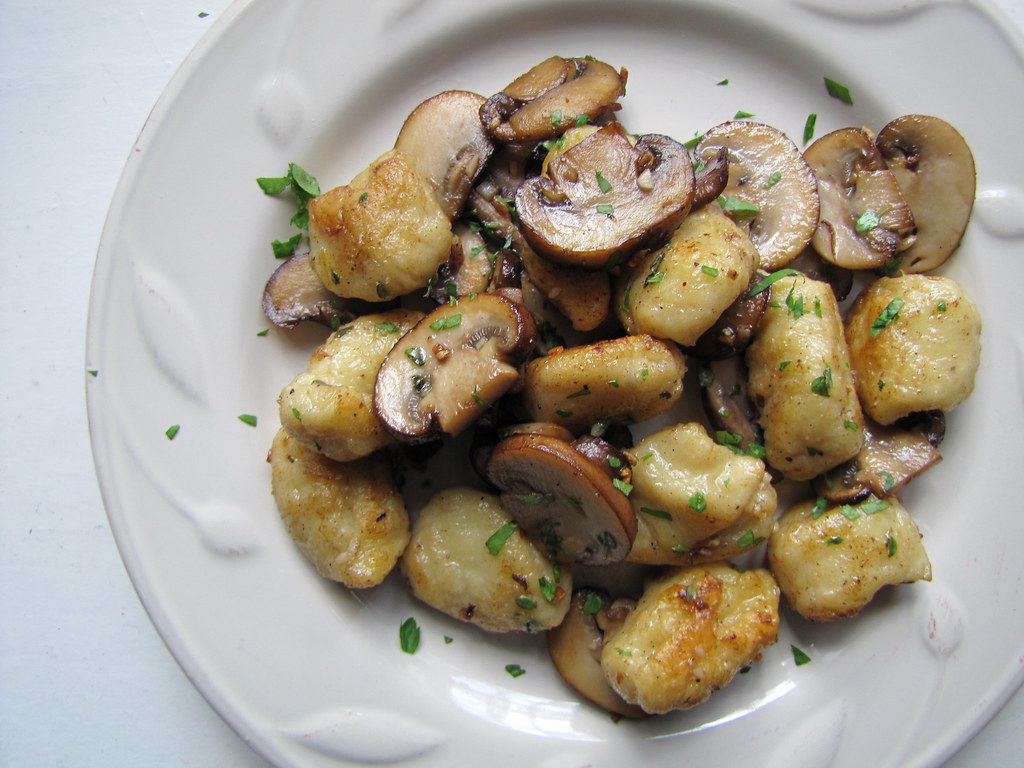 Gnocchi might seem tricky to master at home: you want them to be light and somewhat fluffy inside, textured outside, and preferably a little crisped from hot butter in a pan. Instead, first attempts might yield some over-boiled, chewy nuggets that taste like pretty much nothing. If that’s the case you’re working too hard — overworking the dough, over-boiling; gnocchi can be made with much more speed and carelessness. And to give them a seasonal-tasting twist, they can also be made with a certain fibrous root vegetable (instead of potatoes or ricotta), mashed and folded into the dough: parsnips.

Parsnips have enjoyed great popularity amongst chefs in recent years — their sweetness and substantial starches are often exploited in purees, mashes and soups. From these examples I thought they’d be likely candidates to replace potatoes in the classic gnocchi, which is similar to a simple dumpling in American cookery, or a bigger, clunkier version of German spaetzle. A quick Google search proved that I was not the first to attempt parsnips in this. But as I read some of these not-so-simple recipes online, I thought I’d make ’em in the most natural, easy way I could muster. They turned out great, tasting faintly of sweet parsnips, and behaving in much the same way as any gnocchi dough. 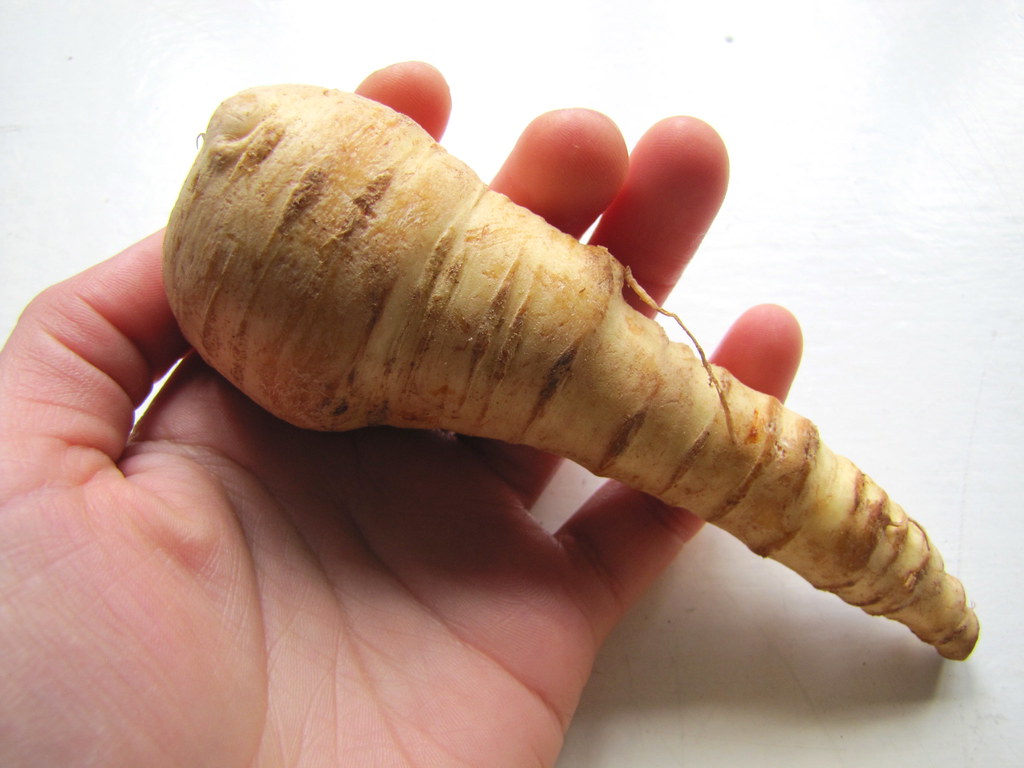 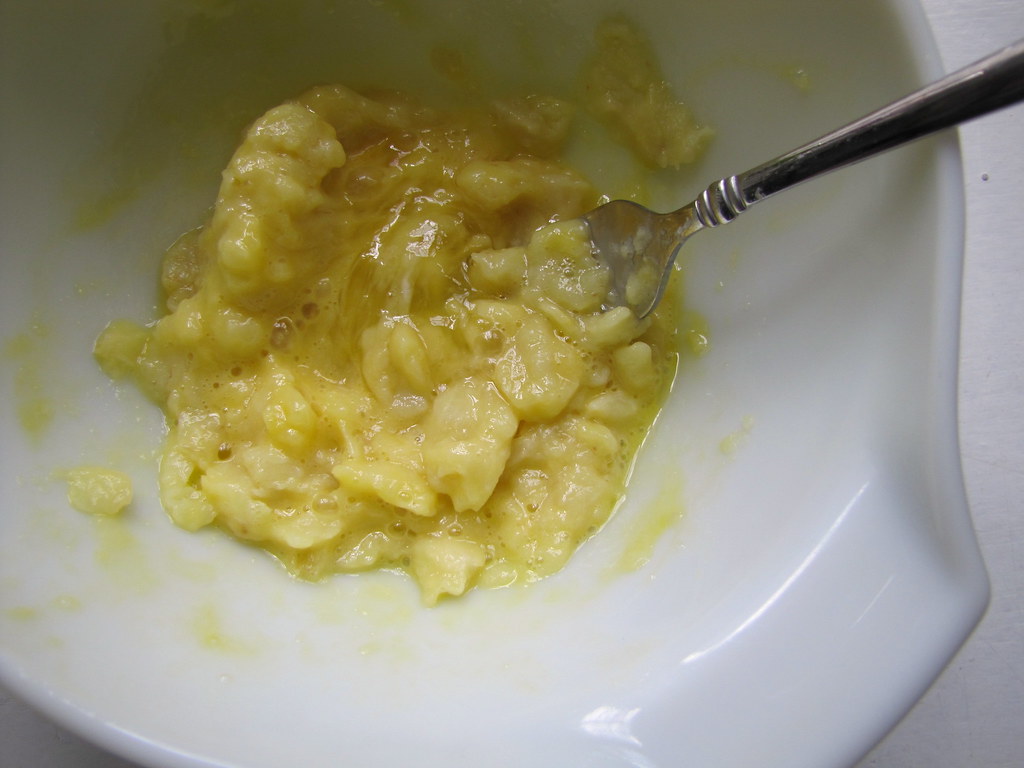 parsnips are mashed and blended with beaten egg


Taking cues from classic gnocchi recipes, the parsnips are boiled until tender enough to shoot through a potato ricer, creating a somewhat uniform mound of fluff (parsnips do have some fibrous texture that’s unavoidable, but charming in its own). I beat an egg and folded it into the mash, and continued to sprinkle in as much flour as necessary until a loose, sticky ball of dough was formed. It’s important to stop here before adding too much flour, or mixing the dough too much, or else your gnocchi may become too chewy and tough. You’ll want to work with the parsnips, also, right after they’re cooked and still warm, as the heat will help bind it with the flour. Unlike fresh pasta, you don’t need to knead gnocchi dough — in fact, you’ll ruin the batch if you do, so make swift work of balling that stuff together and don’t look back. 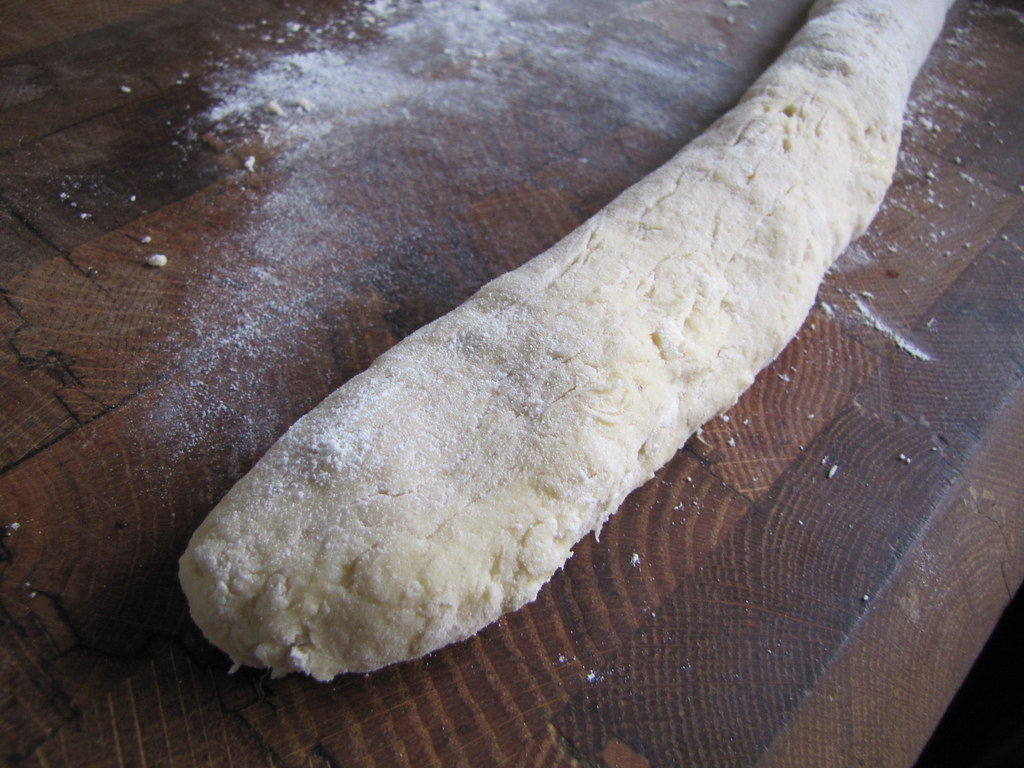 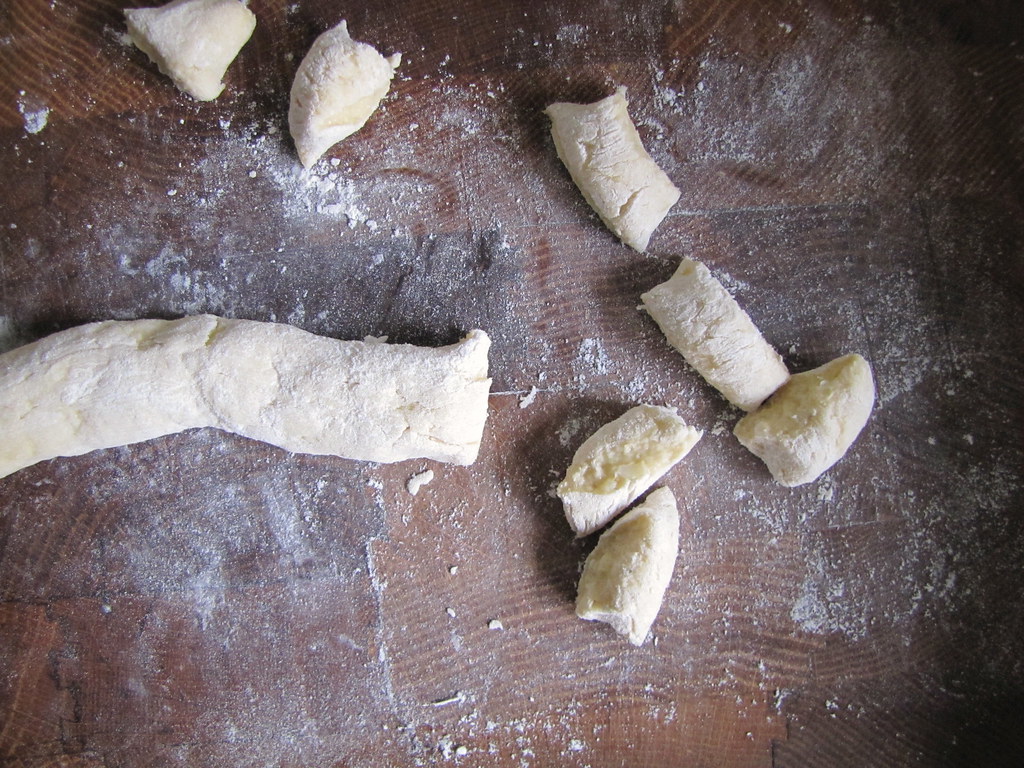 after enough dough is folded in, the sticky dough is rolled out and chopped

The next part should take you back to your Play-Doh days: gently roll your ball of dough into a snake, and cut off knobs along its length. How big should they be? As long as they’re all cut in similar sizes, it’s just a matter of preference. I cut mine a little on the plump side, and not quite evenly-sized, I must admit. But something about the rustic, homely nature of gnocchi seems to permit this. 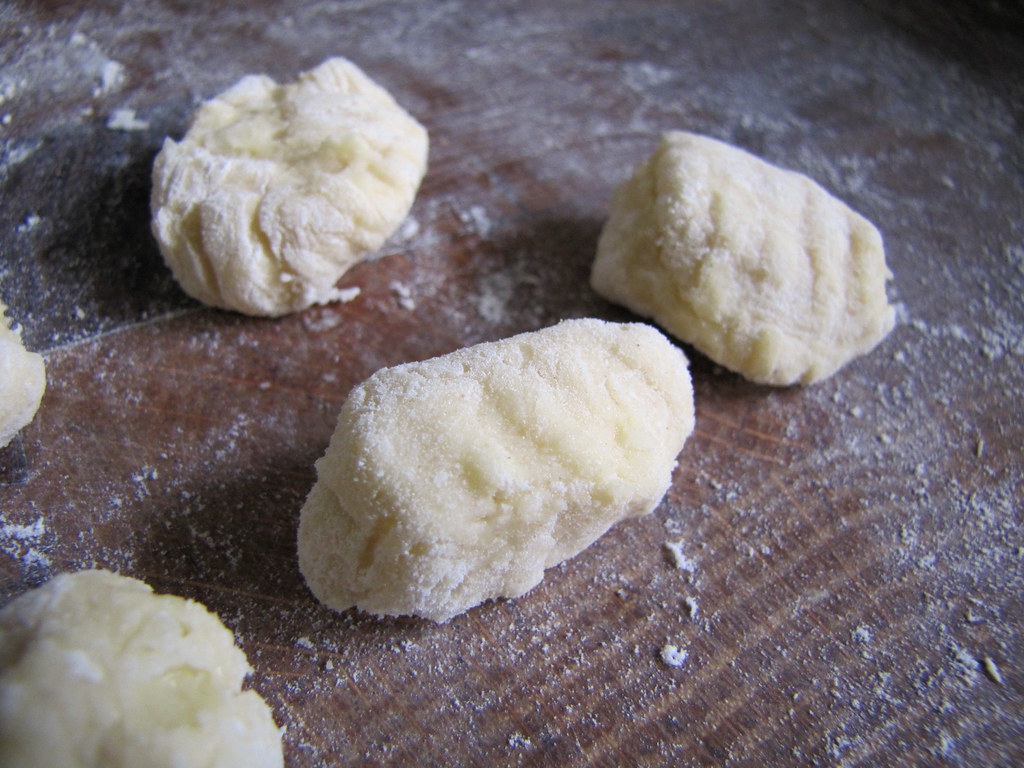 shaping the pieces with prongs of a fork


Take a fork and gently press the side of its prongs around the surface of each piece to create the classic appearance. These dimples are a way of making the finished dumpling more susceptible to gripping sauce and other flavorings. (Read: you could even skip this part if you like.) Finally, a pot of water is brought to a boil and the gnocchi are dropped in to boil a couple minutes. Depending on the size of your gnocchi, you can take them out in as little as a minute or as long as five until they’re cooked through and no longer doughy, but still pretty soft. At this point, I like to transfer them to a pan of melted butter to brown a little on each side. This is optional, but it’s a perk that can’t be done with pasta, and I now take gnocchi up on this advantage every time. 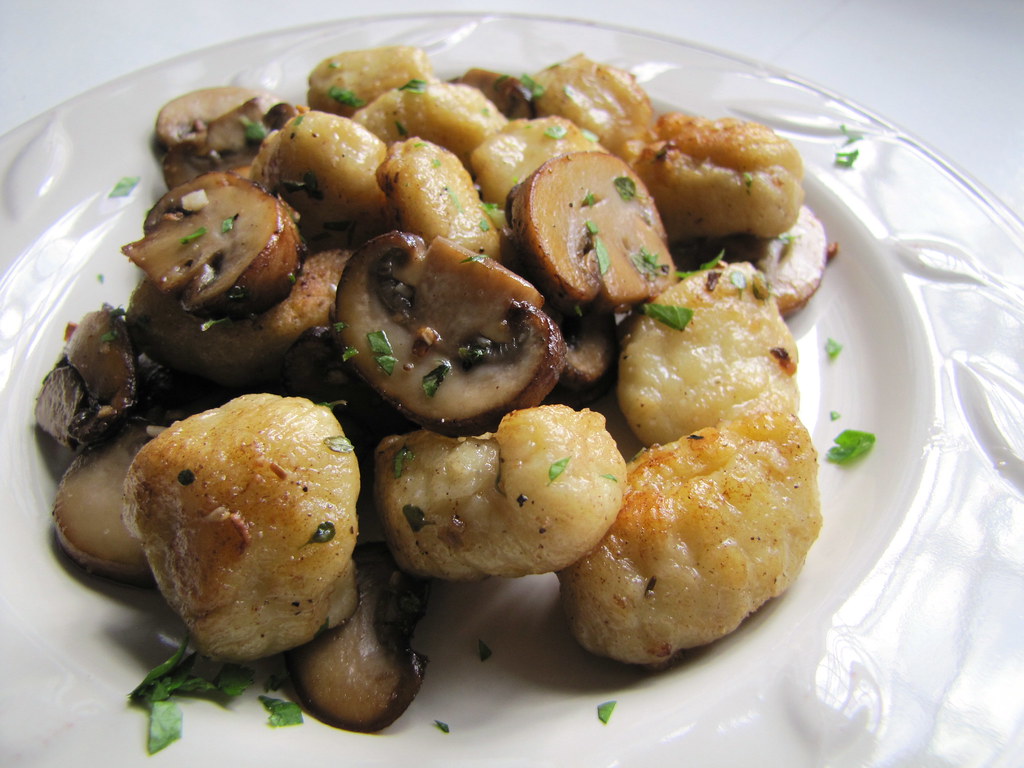 To accompany the sweet flavor of these roots, I grabbed some savory crimini mushrooms and a handful of thyme. These wintery ingredients, accented with butter, meld together with a delicate harmony. A squeeze of not-so-seasonal lemon juice took them to the next level, and made me want to gulp up every last bite. You can dust your finished dish with grated Parmesan, or Pecorino if you like, too. Whatever you do, I wouldn’t bog down the gentle taste of parsnips in this gnocchi with a heavy tomato or meat sauce. Unlike mashed potatoes, parsnips really want to be heard.

Combine the flour, 1/4 teaspoon salt and optional nutmeg in a bowl. Bring a pot of lightly salted water to a boil and drop in the chopped parsnips. Let boil for 2-3 minutes, or until fork-tender. Drain and immediately transfer to a potato ricer; press through into a medium-large bowl. Stir in the beaten egg and stir mixture while gradually folding in shakes of the all-purpose flour mixture a little at a time. Once the mixture just barely comes together to form a ball, transfer to a well-floured cutting board and gently roll it into a long snake (or two shorter snakes). Cut pieces to 1/2-inch – 1-inch sized knobs. Scatter them in an even layer on the floured board (do not pile them up or else they will stick together). Roll the prongs of a fork around each piece to create a faint ring of dimples across the surface.

Bring a medium-large pot of salted water to a bowl and once rapidly boiling, drop in the gnocchi and stir. Let cook 1-3 minutes, or until just tender and floating to the top. Drain.

Heat a large, wide skillet with the butter and once hot and bubbly, add the gnocchi. Let them brown on the bottoms, without stirring the pan, about 1 minute or until golden-brown. Turn and lightly brown the opposite sides for another minute or so. Remove the gnocchi from the pan and if needed, add another small knob of butter. Toss in the sliced mushrooms and a pinch of salt and pepper and cook, stirring occasionally, until mushrooms are just translucent and cooked through, about 3-4 minutes. Return the gnocchi to the pan and season with salt and pepper to taste. Toss in the fresh herbs and serve immediately.

Six brownie points: This is not ultimately the most well-rounded meal, nutritionally; it could use a side salad or sauteed vegetable to boost its health factor significantly. But rather than its starches coming from only refined flour and potatoes, the parsnips lend more fiber and potassium instead. It’s not terribly drenched in butter, but it does make hefty use of this fat as a flavoring agent, which doesn’t help its calorie or cholesterol count. All told, it’s a good winter dish to stick to your bones and fill you up, while making use of a seasonal root vegetable in a new way.

Eight brownie points: The plants used in this dish are great winter farmers market finds, and the going can be a little rough at this time of year. Both mushrooms and parsnips will be around winter long, as well as winter herbs like thyme. Similarly, you can find eggs, butter and even local flour to use in this dish, all staples to keep in your pantry throughout the year.