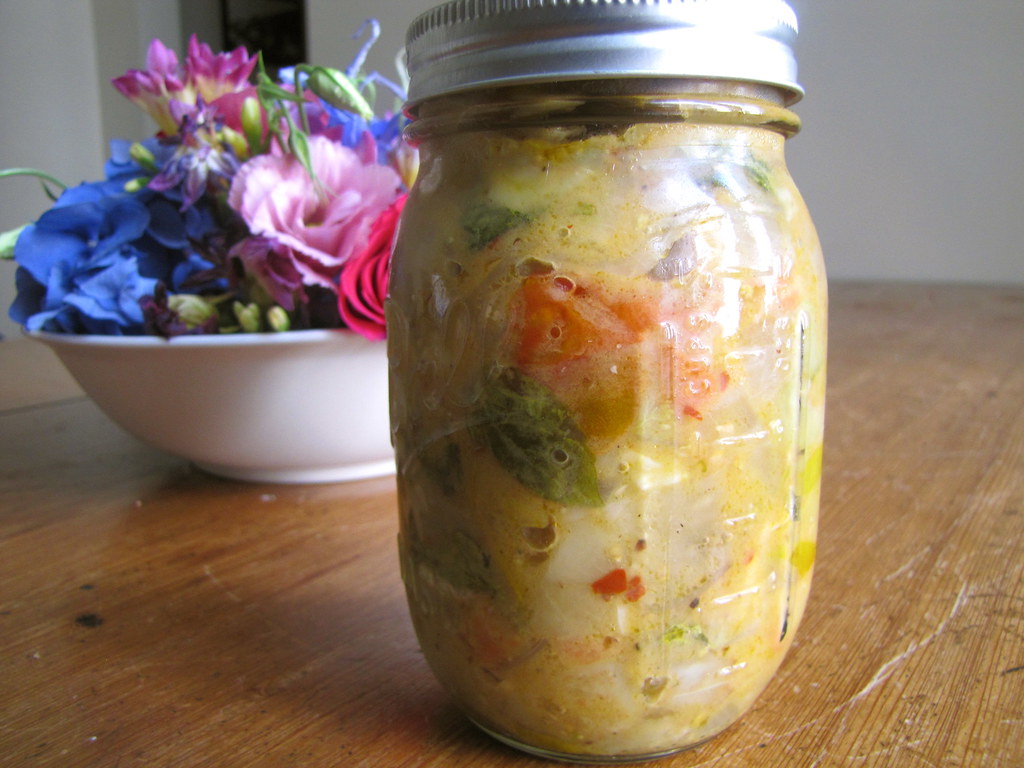 They say a photo’s the best way to capture a moment in time. But I tend to think of mason jars when it comes to keeping some of my favorite ones. Here is the moment: I’m rushing through a not-very-bustling strip of the Greenmarket in Carroll Gardens, adjacent to a park, and in the late afternoon. It’s not a market I go to often, but I’m making use of my chance location by picking up various things for various projects and affairs (padron peppers for a restaurant nearby, heirloom tomatoes for a Farmers Market Fix dinner kit), while keeping in mind that I’m traveling with these goods by bike. And then I chance upon a bright orchid eggplant in a crate, looking lonely, and even the farm attendant at the stand looks lonely, and we make eye contact for a moment, as I’m half-eyeing the eggplant. Yes, I’ll take that, too, I said, shoving the eggplant on the scale, on my harried way out. Remembering a conversation with a friend I had a few days ago about caponata.


True, you’re looking at a photograph of that eggplant, as caponata, in this blog, but naturally I hope you cherish a physical rendition of it in a mason jar in your own home soon. It is so incredibly memorable and good. Caponato is, as I’d described it to that friend before I could remember its name, sort of an Italian eggplant and tomato chutney. It’s a thick, chunky sauce of just-mushy eggplant cubes, smothered with tomatoes (preferably fresh and cooked down), with garlic, basil, and good olive oil. It could be tossed with pasta. But more typically, it’s something you dip bread into, because of its chunkiness and also its piquancy. 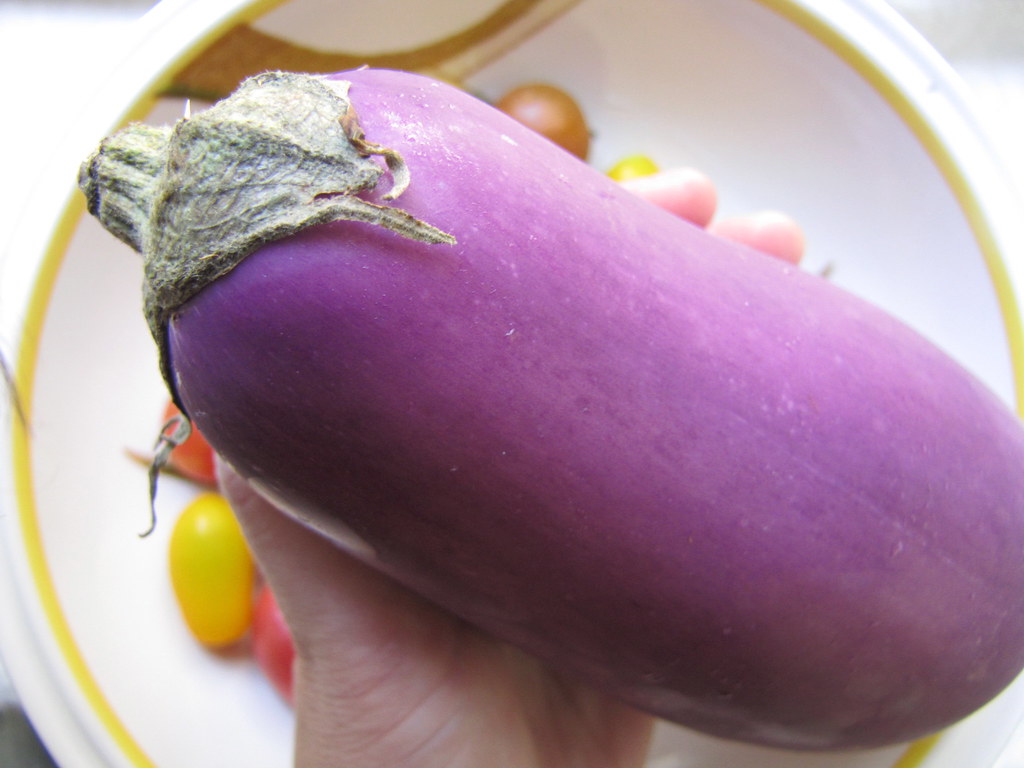 a “neon” eggplant from the Greenmarket


Caponata has more than a tinge of vinegar, traditionally. This makes it ideal for preserving, which it probably was intended for to begin with. It’s Sicilian in origin, but enjoyed throughout Italy nowadays, and elsewhere in Europe and the States. It often has onions or peppers cooked down until soft, and sometimes, capers, olives or seafood such as octopus enveloped into the sauce. 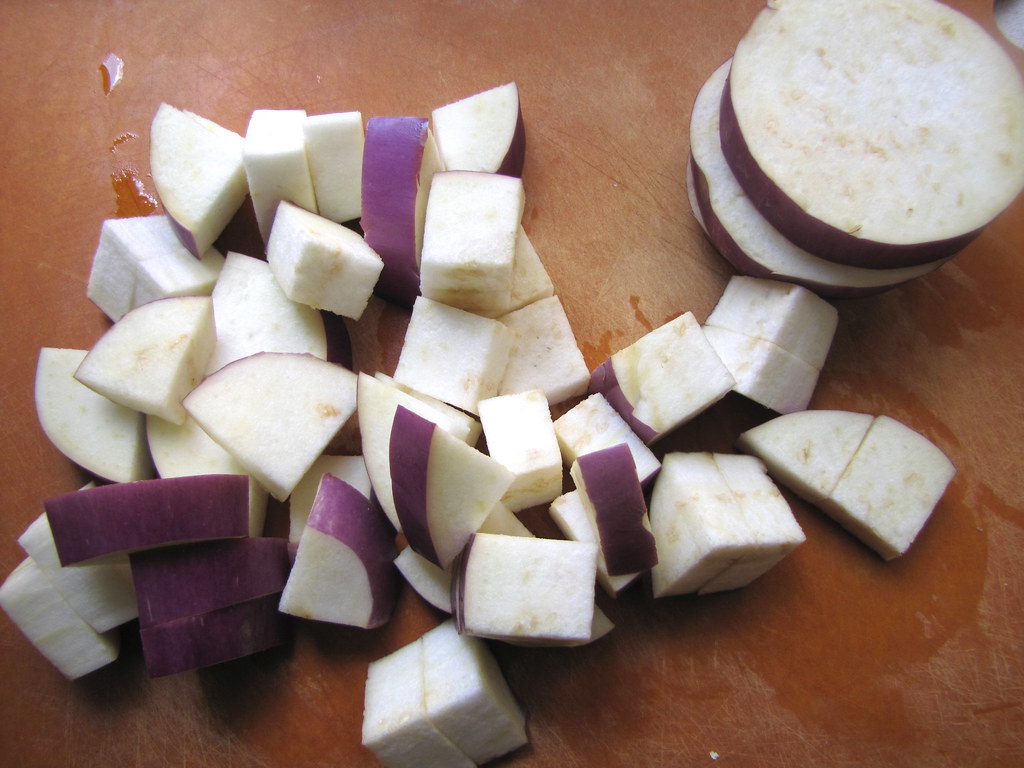 the firm eggplant is cubed 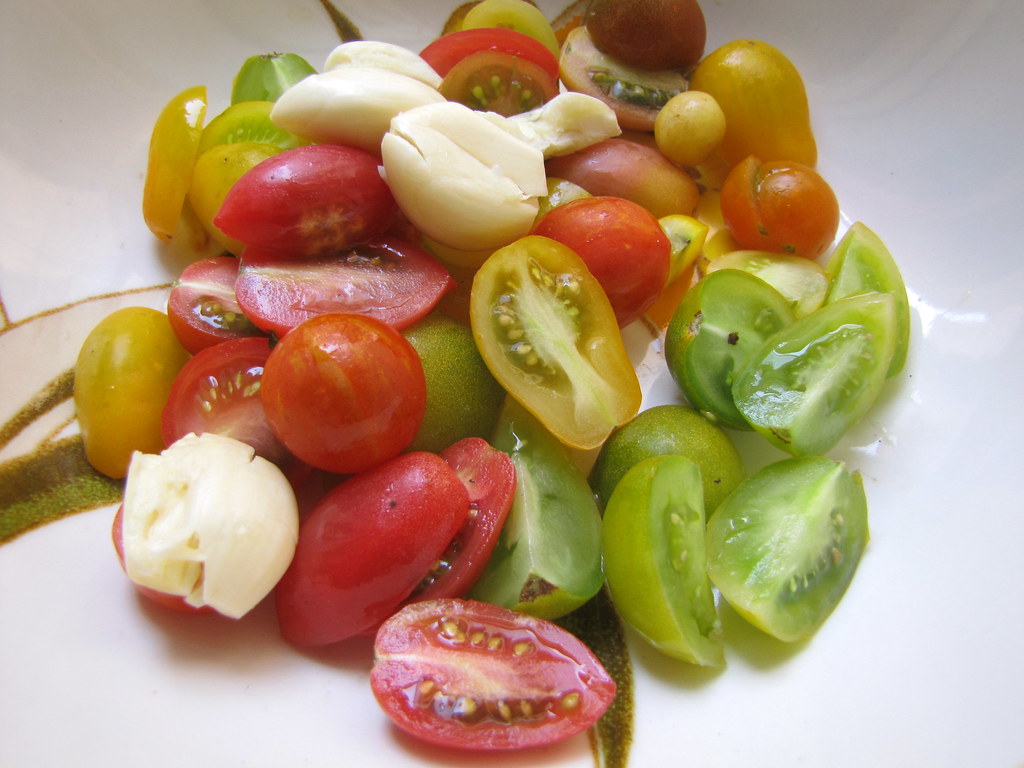 a pint of multi-colored grape tomatoes are halved


I went with a simple variation that marries eggplant with ripe, soft tomatoes and plenty of garlic and basil. This got a good touch of red wine vinegar for acidity (a must if you intend to preserve the sauce in a jar, as I did), and a squeeze of fresh lemon juice just before the lid was screwed on to further reduce the ph level of the sauce. I’ve jarred many pints of fresh tomato sauce over the summers before with a tablespoon of lemon juice as a rule of thumb to ensure the ph level stays safely low enough. 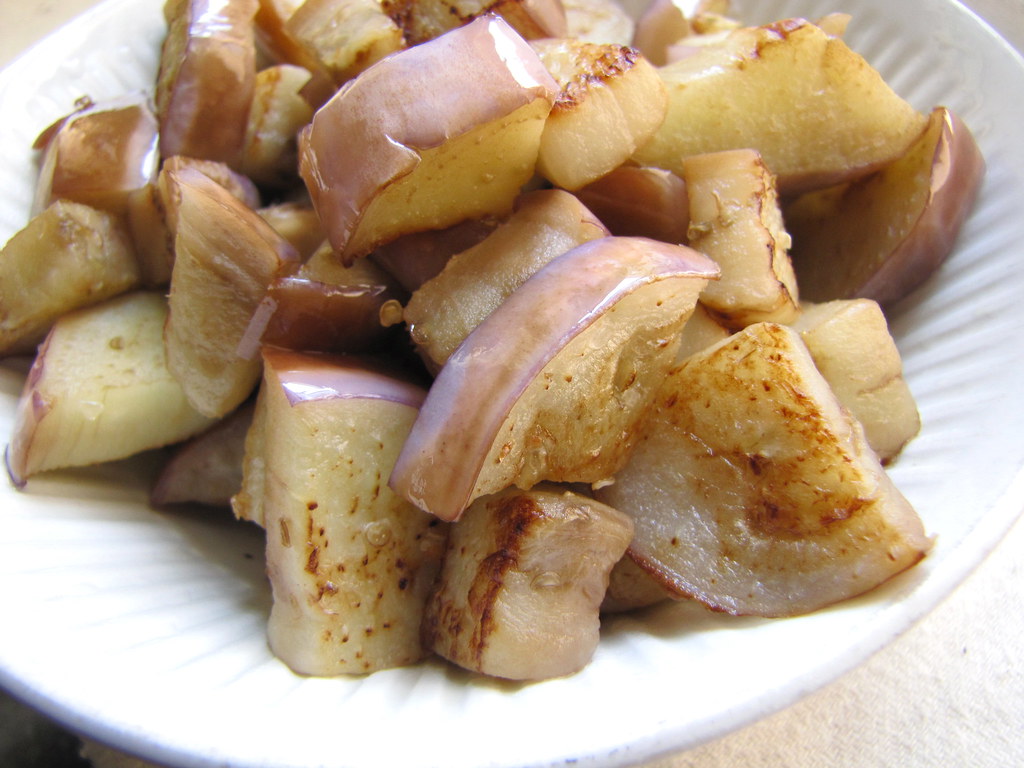 eggplant is cooked first until just browned and softened


That’s really all you need to remember in order to make your caponata last all year long in a jar. That, and boiling your mason jar — even if it’s new — submerged in water to sanitize it. I was lucky to make slightly more of the summery dip than could fit in that jar, and enjoyed it spread on a sandwich with fresh mozzarella that day. The sharp flavor and velvety mouthfeel of this sauce is delectable. And one average-sized eggplant makes a perfect amount for these two portions — a small cup or so along with a pint to put up in a jar. 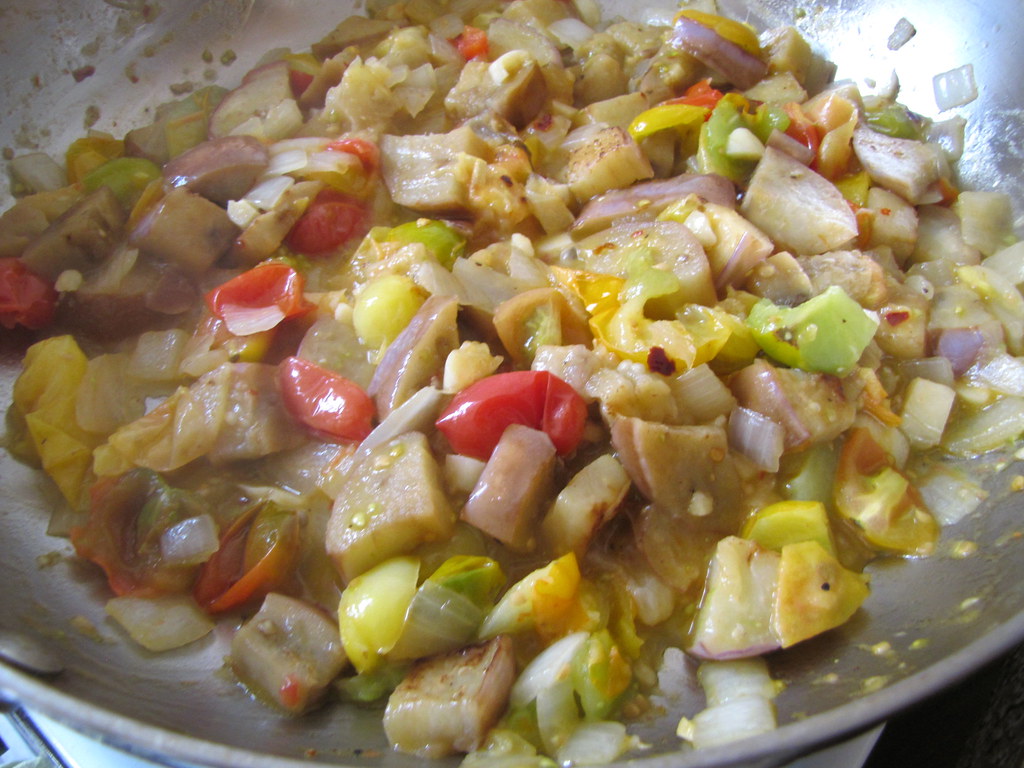 and returned to a pan of softening onions, garlic and tomatoes


So here’s to more summery meals in the winter, thanks to that chance encounter with an eye-catching eggplant, and bountiful tomatoes of the season. Try adding additional herbs like thyme or tarragon to it if you like, or making it extra-spicy with fresh chilies or sweet and chunkier with corn. The recipes you can invent using it are likewise endless, too. And you will have plenty of time to think about those once the caponata is sealed for safekeeping.

Place a pint-sized mason jar and its lid in a pot with enough water to submerge. Bring to a boil and let boil rapidly at least 5 minutes, completely submerged.

Heat the olive oil in a large, wide saucepan. Add the onions, optional chili flakes and eggplant cubes along with a couple pinches of salt and pepper. Cook over medium-high heat, stirring occasionally, until onions are opaque and eggplant pieces are slightly browned and are turning translucent brown rather than all opaque white, about 5 minutes. Add the tomatoes and garlic, and continue cooking another 2-3 minutes, or until tomatoes have released most of their juices and are squishy-looking. Add 1/2 cup of water and the vinegar. Let simmer, stirring occasionally, for another few minutes. Taste for seasoning, adding any additional salt or pepper. Add the fresh basil leaves.

Carefully remove the mason jar and its lid from its hot bath with tongs. Fill the mason jar just to an inch from its top with the caponata. Fill to just below the lid with the tablespoon of fresh lemon juice. Screw on the lid tightly. Place the jar standing upright back into the pot with hot water so that the water level reaches at least half the height of the jar. Boil the water with the jar standing upright inside the pot for another 5-10 minutes to “process” the jar. Remove the jar and let stand at room temperature to cool down. The jar’s lid will suck inward (often with a loud “pop”), sealing the jar after an hour or so of cooling, ensuring that it’s safe for storing at room temperature. Store jar away from sunlight (to preserve maximum flavor) for years. Refrigerate after opening. Refrigerate any un-jarred portion of the caponata for up to a week.

Cost Calculator
(for 1 pint plus 1 cup)

Five brownie points: Whether you use it as a dip, a sauce, or sandwich fixin’, this caponata is a light and healthy way to add flavor. Eggplants might not be the most nutritionally dense vegetables around, but they make a lean, mean substitute for meat. They’ll provide some potassium and fiber, while the tomatoes will add antioxidants like Vitamin C. There’s no added fats besides heart-healthy olive oil, and lots of garlic is a boost to your immune system.

Eight brownie points: True, you can get eggplants year-round, but I’ll doubt you’ll find neon purple, white, or brushstroke painted-looking (and pesticide-free) ones except from small specialty farms at farmers’ markets now. Save these ones to admire the rest of the year. Also, tomatoes can be found by the bargain bagful this time of year from farmers’ markets, if they’re a little bit soft (and perfect for cooking into a sauce such as this).