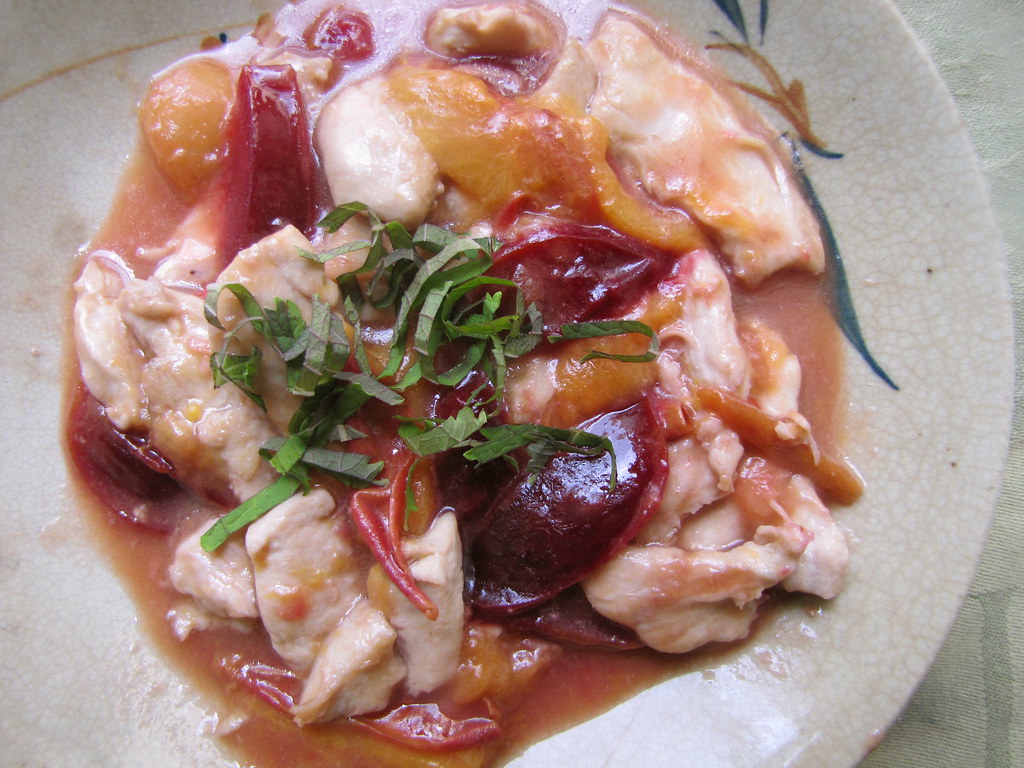 No need to reach for a jar of Asian plum sauce now that the stone fruits are in season. These juicy slices cook down quickly to a jammy sauce that’s much more tangy and refreshing. Smothered on tender chunks of chicken, with a splash of soy sauce, it’s savory and satisfying, too. I’m now convinced that the old sweet-and-sour stir-fry routine must have been prompted by fresh plums.


Paradoxically, I’ve never been much of a fan of sweet and sour stir-fried dishes, nor of most Chinese plum sauces, a jarred condiment that’s all too often watered down with sugar and vinegar with nary a bit of actual plum to be found in it. This is a dip or sauce that’s similar to “duck sauce,” and Cantonese in origin (although not so ubiquitous as it may seem given the packets of orange goo that come with every American Chinese food take-out). But unlike apricots cooked down to a gingery sludge, the plum sauce is darker and deeper in flavor with soy sauce and often a hint of chilies. And aptly purple, the more so the better quality of the sauce, I think. 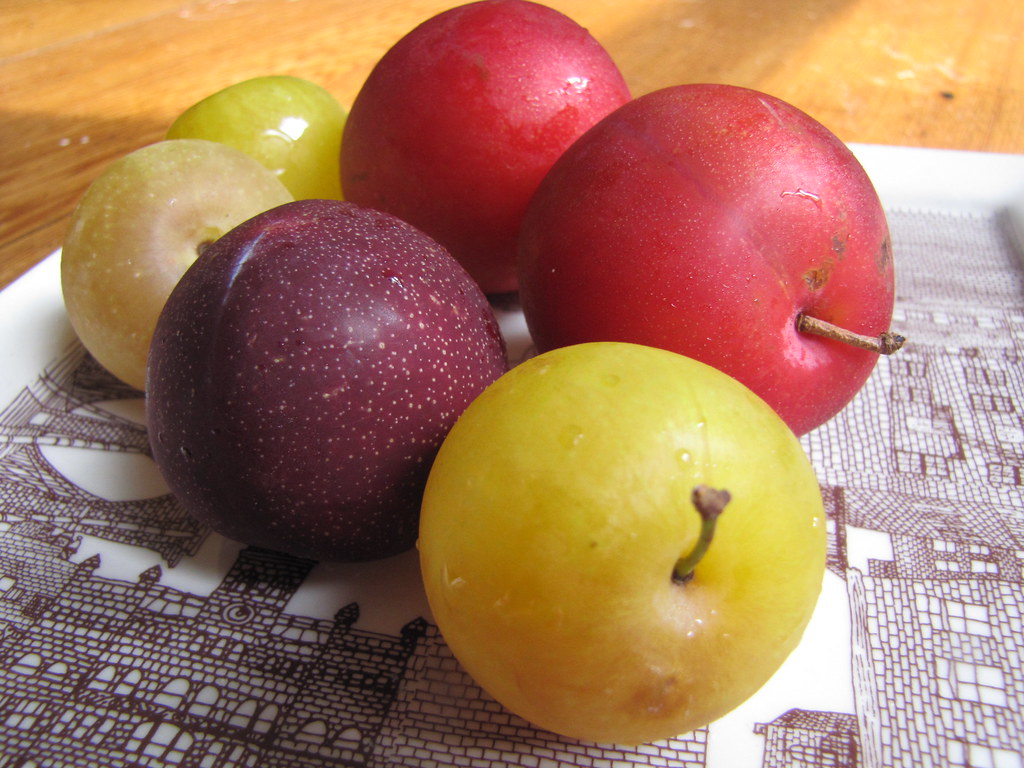 
I didn’t like any of it until I tried a very intense-tasting small jar of plum sauce that I’d gotten at a health-food store in Taiwan, which boasted five ingredients: plum, perilla (aka “shiso”), sugar, vinegar and agar, a natural thickening agent. Still, after making a somewhat deconstructed version of the sauce at home using fresh plums from the Greenmarket, I prefer to skip the jarred stuff altogether. 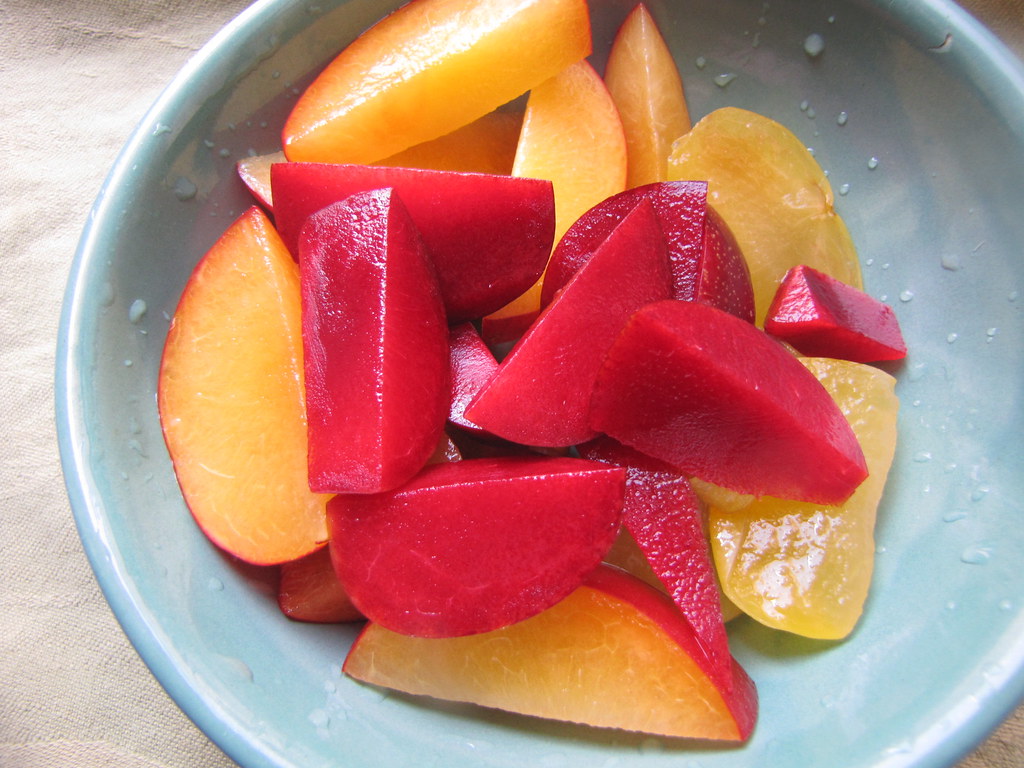 sliced to large wedges for stir-frying


Purple-skinned plums (or “black plums” as they’re called) can easily create this quintessential flavor combination. I left the skins on, which add extra tanginess and antioxidants, and because I had some less-firm yellow and red plums on hand, added those chopped up, with their skins on, too. I cut them to generous wedges and let them cook just until some stayed partially intact. This created a bubbly, viscous, and very tangy sauce all on its own, without added sugar, vinegar, or thickening agents. 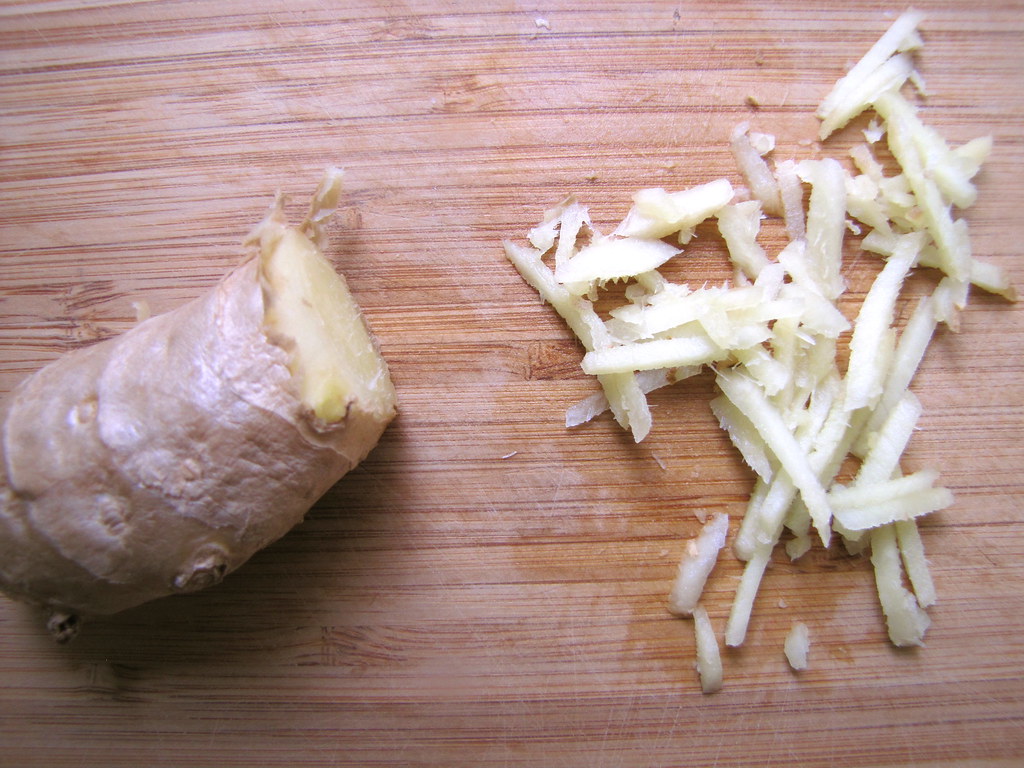 fresh ginger is sliced to matchsticks 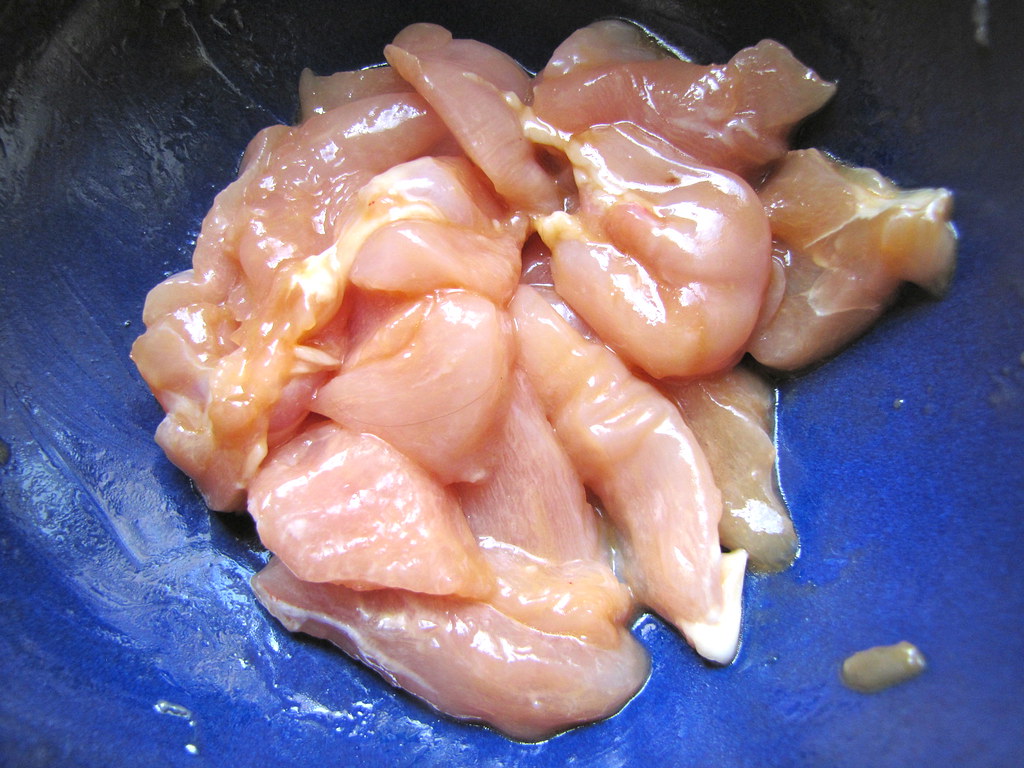 
I think that ginger is a fine complement to these stone fruit, in sweet and savory applications both. Mild-tasting chicken is a great protein to cling to this sauce and let it stand out. I began by marinating some pieces of chicken breast with a few dots of soy sauce, salt, and sesame oil for a shiny gloss. This is cooked in a hot pan first, then removed, to give room (and time) for the plums to cook before returning them. Ideally, you’ll want to sear the chicken pieces in spots on the pan and there’s no need to let them cook through entirely. Once returned to the pan with the bubbly plums, they’ll finish cooking very quickly, and absorb the flavors more in doing so. 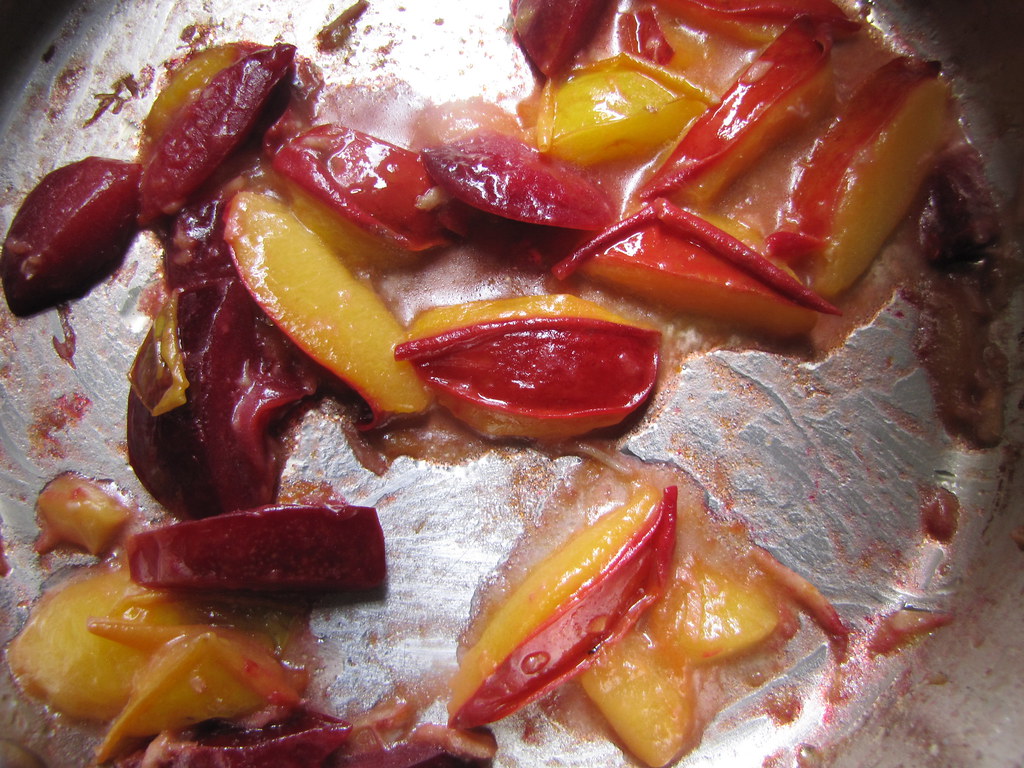 plums and ginger, after a minute of stir-frying


Depending on how mushy or firm your plums are, you might want to add a splash of water as they cook down to a soft sludge in the pan, to create more of a sauce-like consistency. I think I may have added a bit more water than I should have, but in the end, it was great for coating a bowl of rice with. 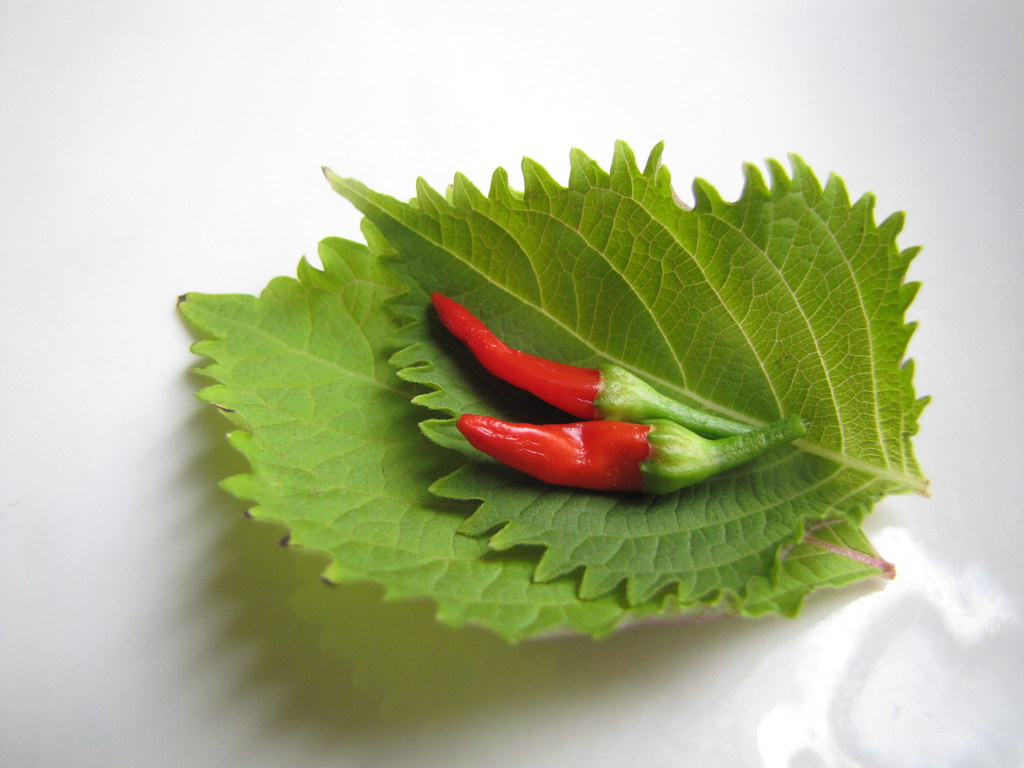 
Finally, you can add a shower of chopped scallions or cilantro for a finishing garnish. But since I have shiso growing on my fire escape (and since it’s in the jarred sauce I like), I garnished my plate with a few chiffonades of the distinctive Japanese herb. I don’t expect everyone to be growing this very rare herb at home, and you can really only find it at Japanese groceries, or a few small farms’ Greenmarket stands. But plums and shiso are a classic combination in Japanese cookery (such as with umeboshi or pickled plums), and the minty, peppery-tasting leaves really added a wild contrast to the loud flavors in the sauce. Grab a seedling plant at your local plant nursery if you can find one now; they’ll reseed themselves and spring back next year to flavor any dishes you make, as a perennial.

Combine the chicken slices with the cornstarch, sesame oil, 1 teaspoon of soy sauce, and a pinch of salt. Let marinate while you prepare the rest of the ingredients.

Heat 2 tablespoons of the oil on a wide saucepan over high. Once very hot, add the chicken slices and stir-fry immediately for about 30 seconds to 1 minute, just until the pieces are lightly browned in patches, but not necessarily cooked through. Transfer to a bowl and set aside.

Heat the remaining tablespoon of oil in the same pan and add the ginger and optional chilies over medium-high. Once fragrant, add the plums. Stir occasionally until the plum pieces have spilled juices and are bubbly. Add the remaining soy sauce and the optional water if mixture looks too dry (if the plums aren’t very squishy). Return the chicken to the pan and cook, stirring occasionally, until well-coated and pieces are cooked through, about another minute. Taste for seasoning, adding extra soy sauce if desired. Transfer to a serving plate. Top with the optional chiffonades of shiso. Serve with rice as part of a multi-course meal with veggie sides.

Six brownie points: This may not be the most well-rounded meal on its own, but it’s certainly tasty and filling, and provides many immune-boosting antioxidants thanks to the plums. As part of a family-style meal with a couple other courses including more vegetables, it would make for a fairly light protein course, with lean chicken breast meat and little added fats.

Seven maple leaves: This dish has a more significant environmental footprint than vegetarian ones simply due to its animal meat. However, the chicken is used in fairly equal quantity to the seasonal, local plums, and is free-range and organic. I savor the addition of meat to my diet now and then when it’s responsibly raised, and the dish couldn’t be as sweet, savory and sour without.