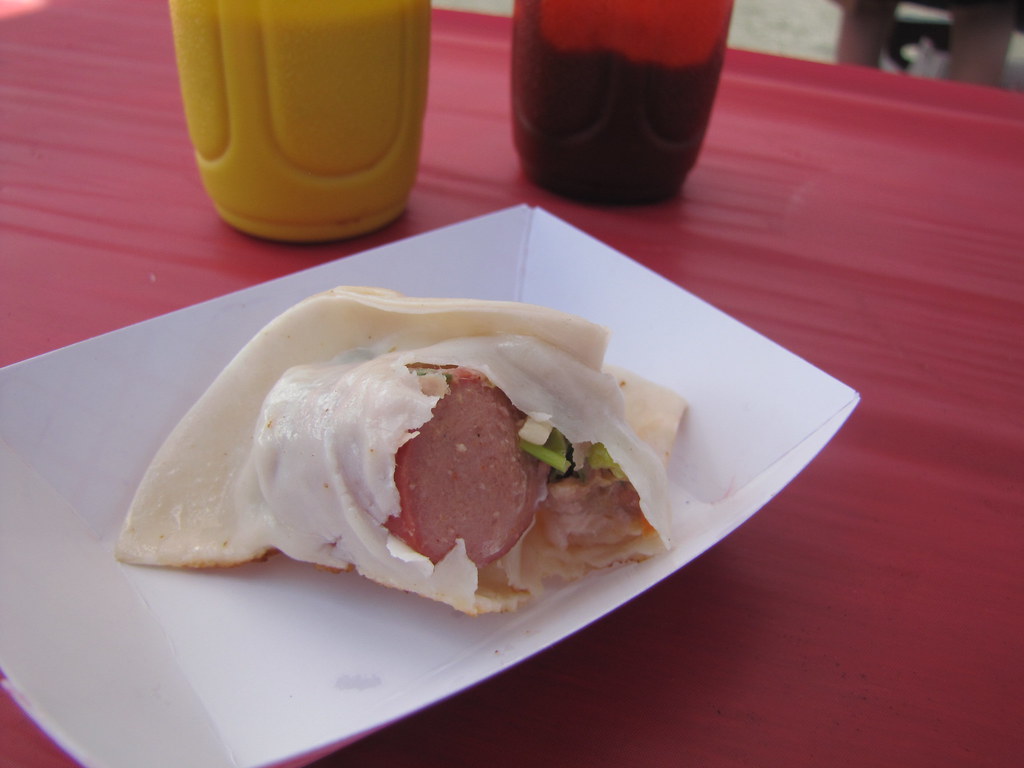 Last Saturday was the seventh annual Great Hot Dog Cookoff, and it was a doggone success. With 30 chefs (including six professional businesses in their own category) making inventive hot dog creations for a good cause; some 700 people attending to eat, vote and drink; amazing volunteers; and Kelso Brewery gathered for the event, we raised more than $10,000 for the Food Bank For NYC. And had a pretty good time.


I think one of the biggest contributors to the event was the weather. It was a clear and sunny mid-eighties all day, and we were camped outside in the parking lot of the newly repurposed Phizer building in Williamsburg (which now houses commercial kitchens for local businesses such as Kombucha Brooklyn, who also attended the event). This was the first public event to be held in the space, and I’ve a feeling many event organizers will be eyeing it for future outdoor shindigs. For the last three years, the Great Hot Dog Cookoff was a block party in Clinton Hill just outside of Kelso Brewery. This new venue allowed for more space and party-goers — although there was a mad scramble to pick up more kegs of beer from Kelso in the middle of it this year. 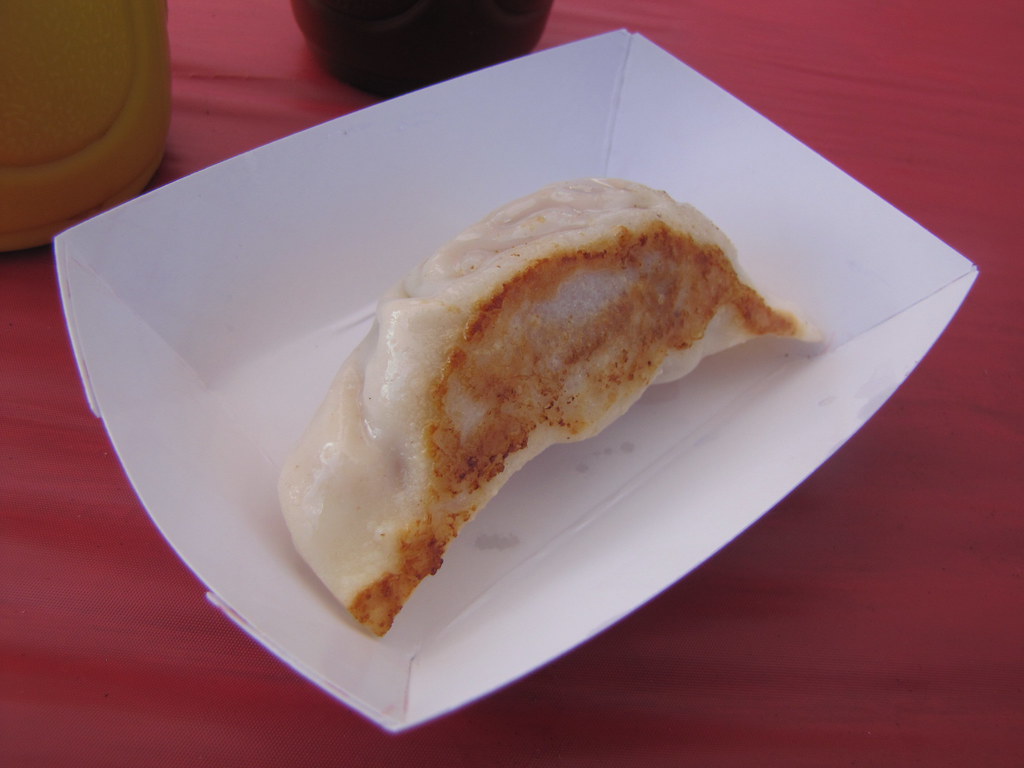 This was my fifth time competing in the showcase of crazy hot dogs. Keeping true to my tradition of never using an actual hot dog bun (previous years saw the Maki Dog, the Green Curry Cucumber Dog and the steamed bun-encased “Hapa Dog“), I made a Chinese dumpling with a traditional shrimp-studded filling and a slab of hot dog pinched inside. It looked just like a regular dumpling (or potsticker, or jiaozi), until the moment one bit in. It was fun to surprise people with, and it was even more fun folding the 250 some dumplings the night before with a bunch of friends. My teammate this year, Shunya, and I made swift work of those chopped up hot dogs, dumpling wrappers, and filling over the course of a couple hours, at the home of another friend Aaron, who in turn was making Vietnamese-style summer rolls for he and teammate Noah’s entry. 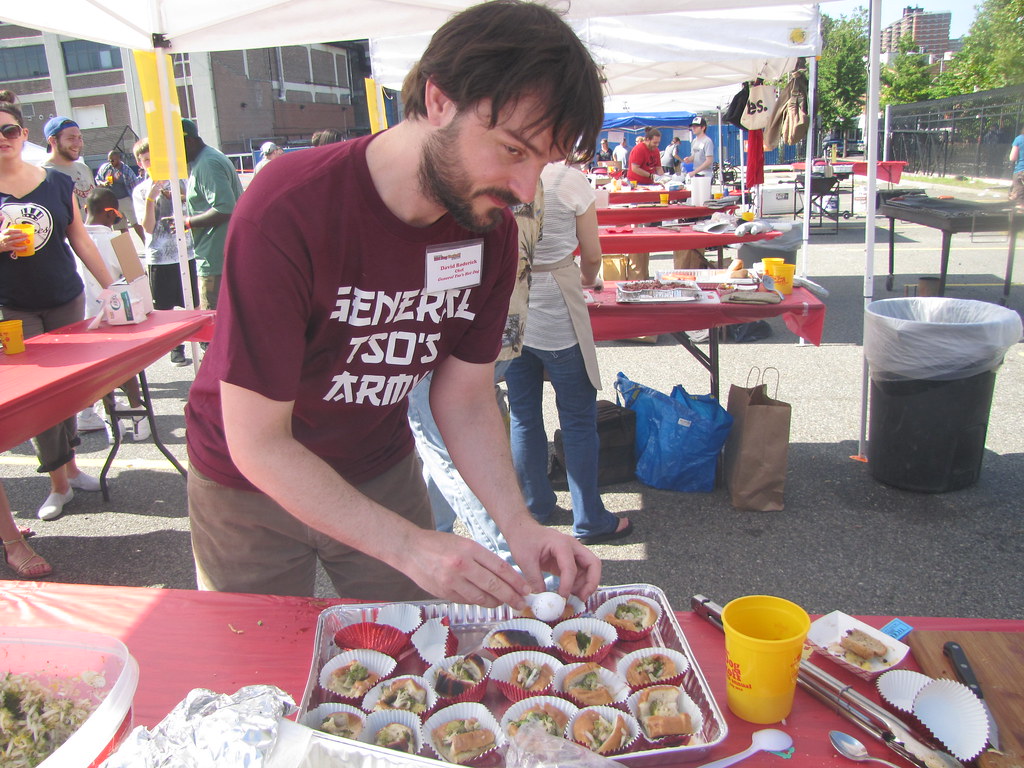 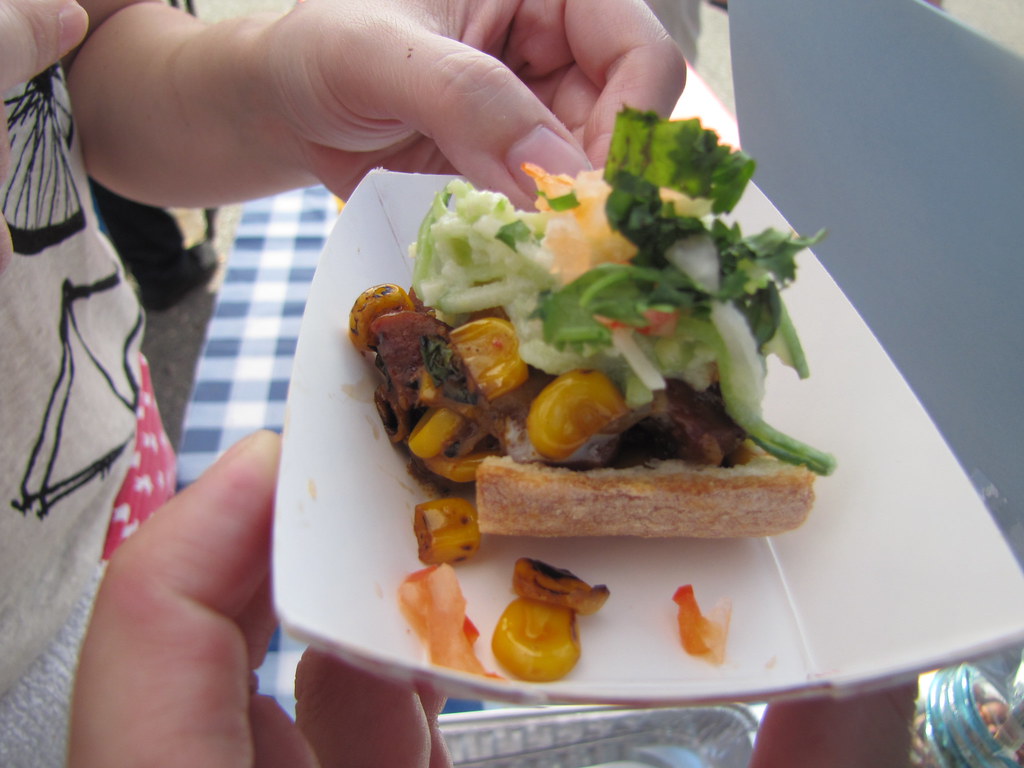 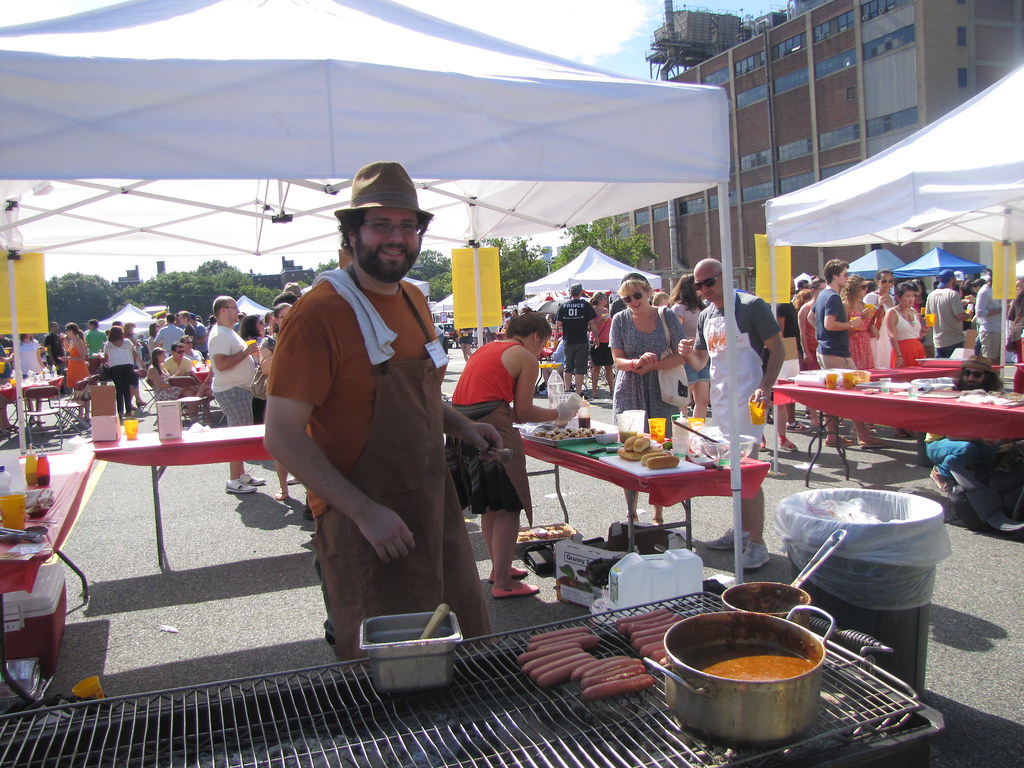 Eric Sherman of team Anarchy Dog on the grill 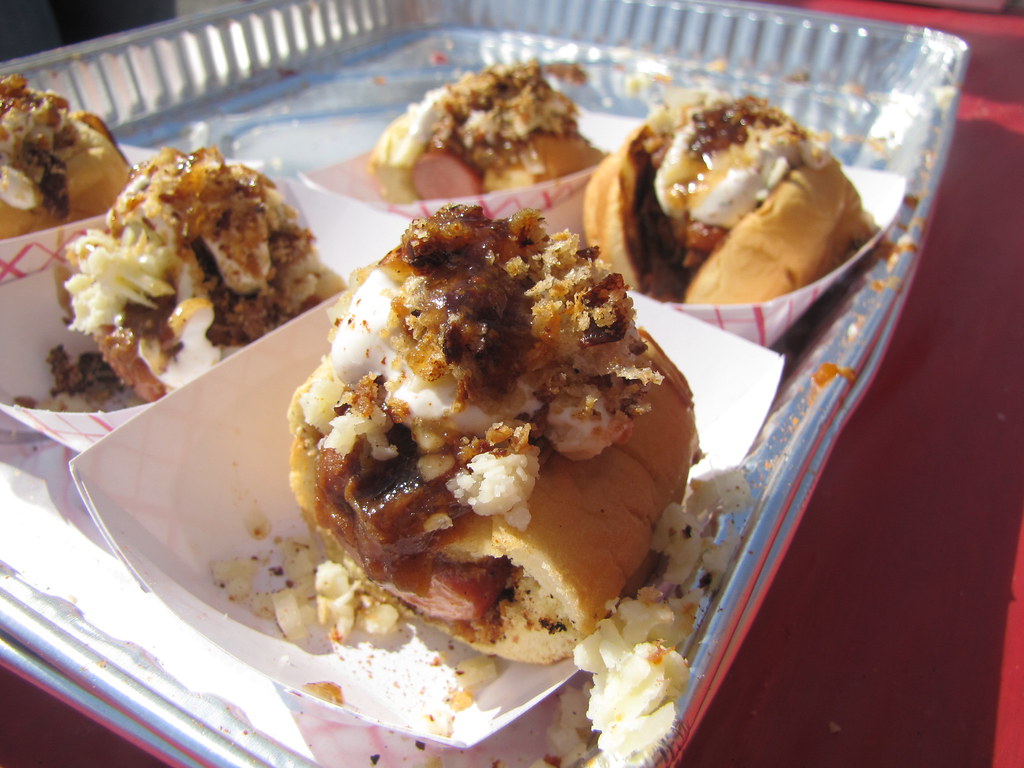 and their duck fat-infused dogs 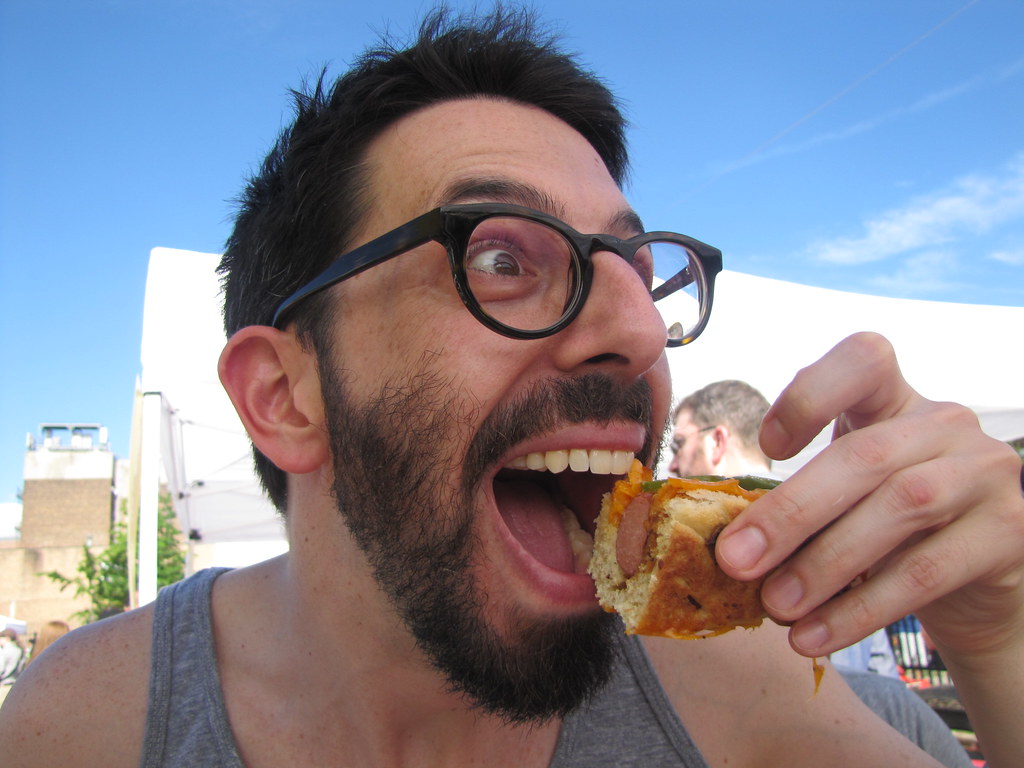 Indeed, our “hot dogpling” was not the only Asian snack food-inspired hot dog creation of the day. In addition to those summer rolls (which were perfectly refreshing and herbal, a great entry), David Roderick — a previous years’ winner — deep-fried pieces of hot dogs then coated them in a sweet and spicy glaze for his “General Tso’s Hot Dog.” It was a wildly unexpected yet delicious entry, too. Eric Friedman, another veteran contestant in the event, filled wonton wrappers with a kimchi and Chinese sausage-studded mac and cheese — and hot dogs. I didn’t get to taste every hot dog, but loved my tentmates Laena and Eric’s “Anarchy Dog,” made with duck chili, duck cracklin breadcrumbs, crema and some of Laena’s amazing jam. That was an offbeat combo of toppings that came together really well — the key to Great Hot Dog Cookoff success. 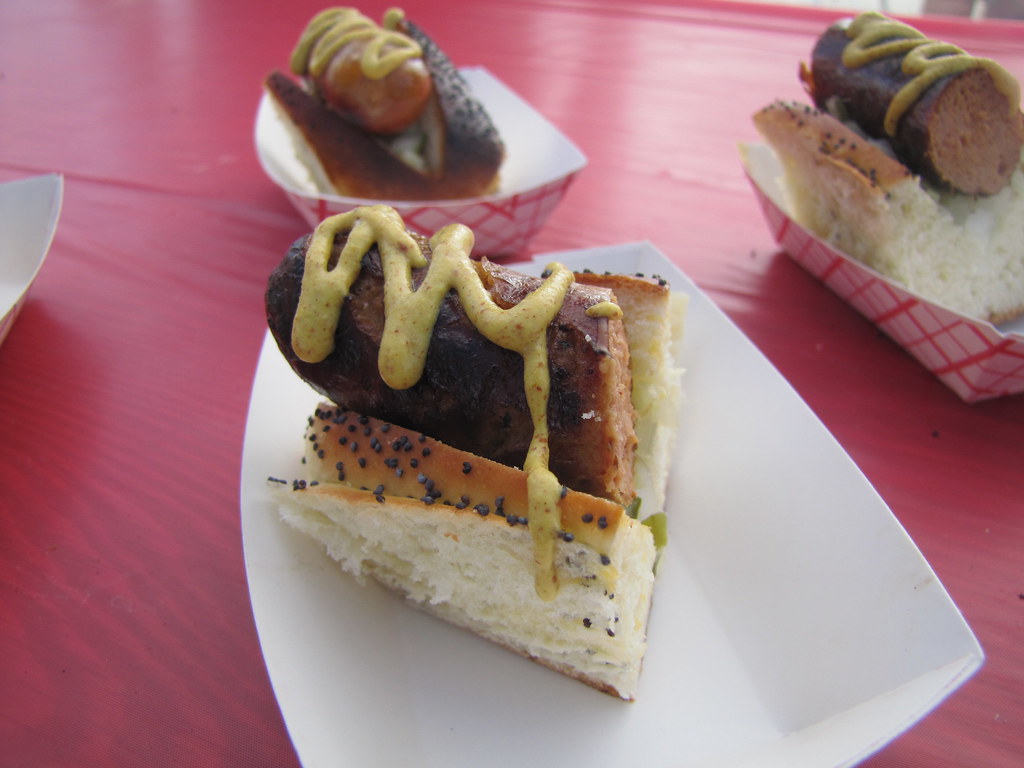 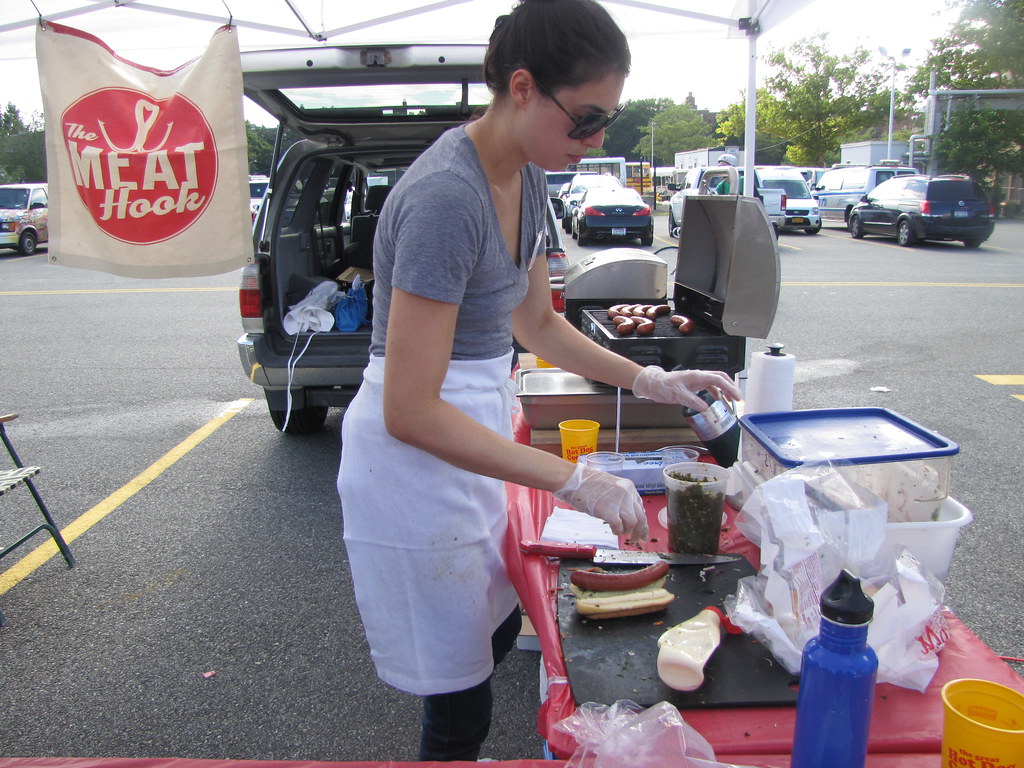 In the “Pro Row” tents, which I scoped out on my way to the porto-potties, each of the restaurants or food businesses had to make their own housemade hot dog in addition to the topping creations. Whereas the amateur contestants are given hot dogs donated by Applegate to do what they will with, the pros had to show off their charcuterie-making chops. I loved The Meat Hook‘s homemade spicy hot dog link, which was topped with a colorful (and also quite spicy) fresh cabbage slaw. The Mile End‘s hot dog was classic and fitting for the celebrated nouveau Jewish deli: a really well executed dog with the perfect accoutrements of a poppy seed bun and tangy mustard. 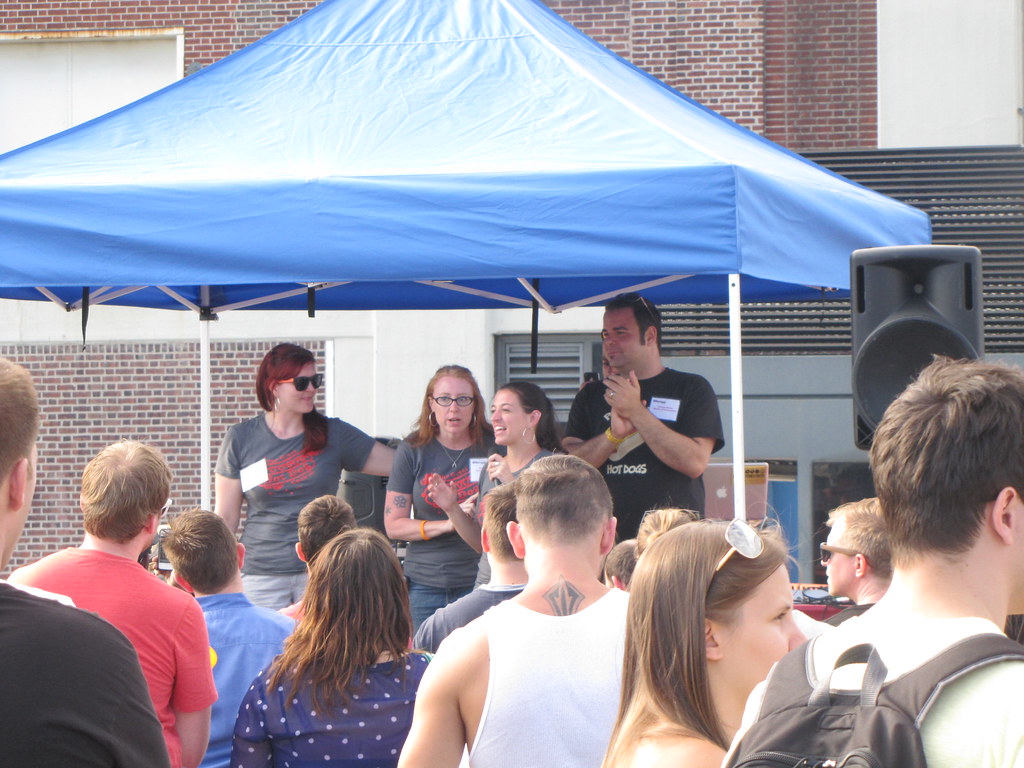 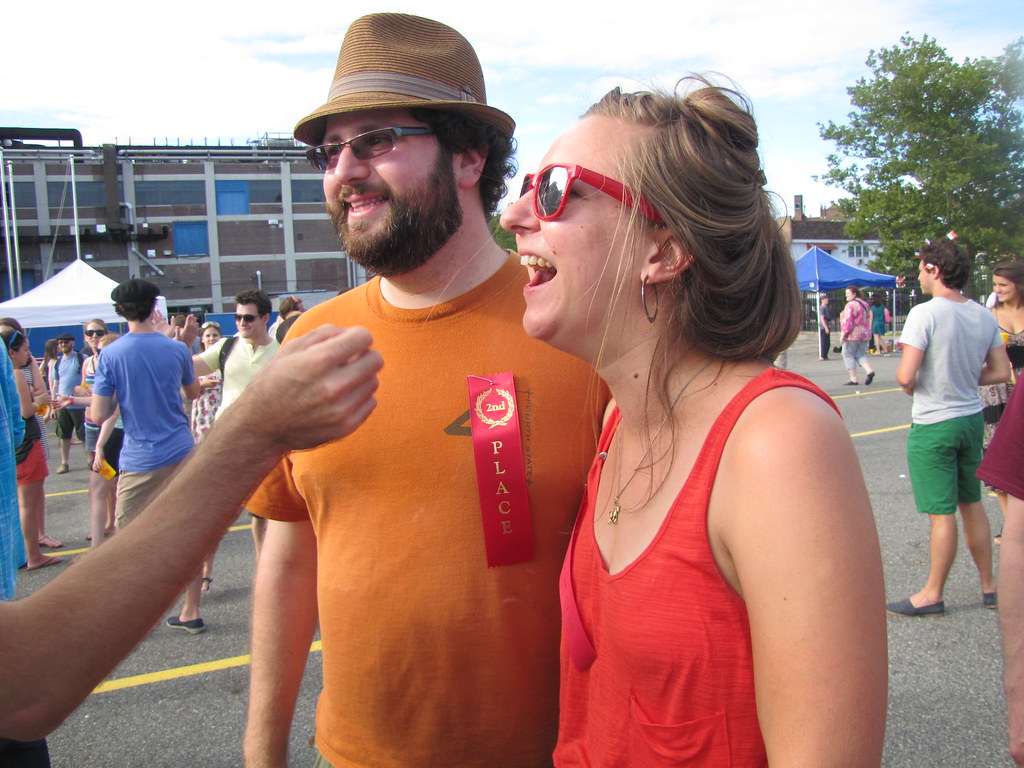 Eric and Laena won second place in both Judges’ awards and People’s Choice! 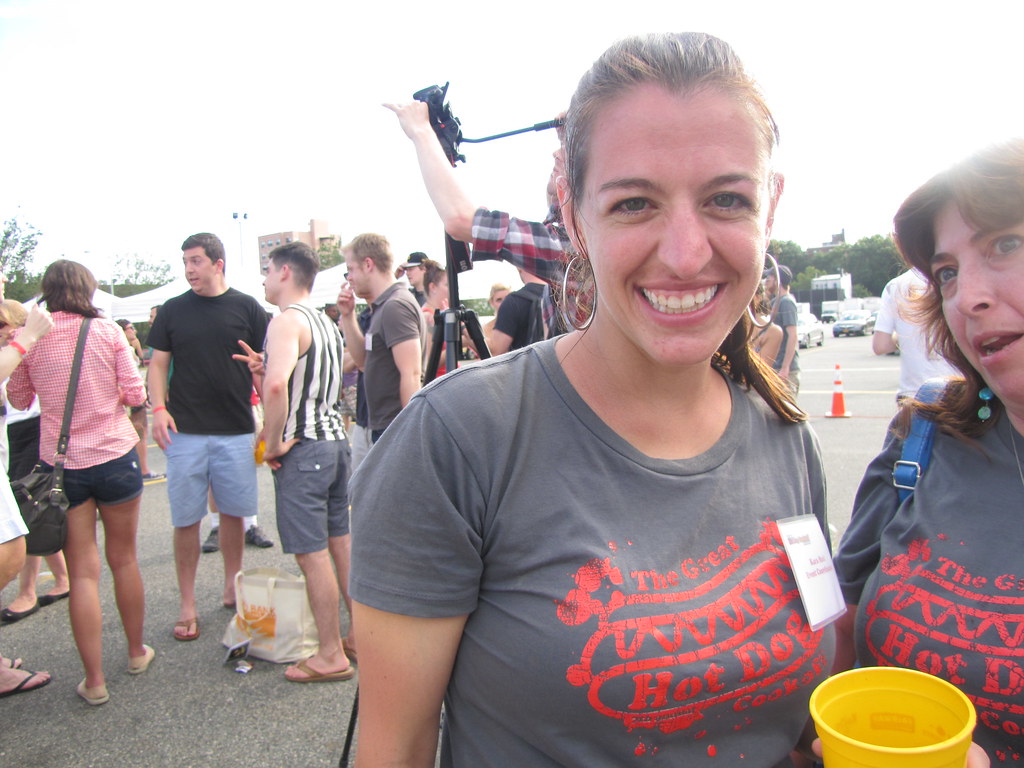 At the end of a very long day at the grills, buoyed with beer and hot dogs galore, the event’s organizers stepped up to the stage to announce the winners. There were two categories of judging: each hot dog was tasted by a panel of eight judges, who were wandering the event and trying every single hot dog undercover. Then, everyone who bought a ticket to the event gets to cast their vote for their favorite, determining the People’s Choice Award. The judges narrowed down the 30 hot dogs to about ten finalists in the last hour or so of serving. Shunya and I and our tentmates Laena and Eric were delighted when a volunteer informed us ours had both made it to the finals, and we had to make a platter of eight perfect bites for the judges’ last round of deciding. But it was a frightfully tough competition, with so many unique and delicious hot dog entries from all of the amateur chefs — I honestly didn’t see any one that didn’t look great.

Finally, it was time. The winners for the “Pro Row” competition were announced, and The Meat Hook took the cake. The audience loved the following three hot dogs, which were awarded third, second and first place in the People’s Choice vote:

And here are the top dogs, as per the judges!

Alas, I didn’t get to try too many of these awesome hot dog creations, but it was a grand old time celebrating with Laena and Eric for their two-tier second-place victory afterward. The Hot Dogpling didn’t win bragging rights but all of the contestants got to take home a goody bag of gifts from sponsors. And I just now remembered that I left those all in the trunk of Laena’s car, along with my cooler and pots… yikes. What a good time, and for a great cause. Thanks all for coming out, and let’s look forward to the next year!