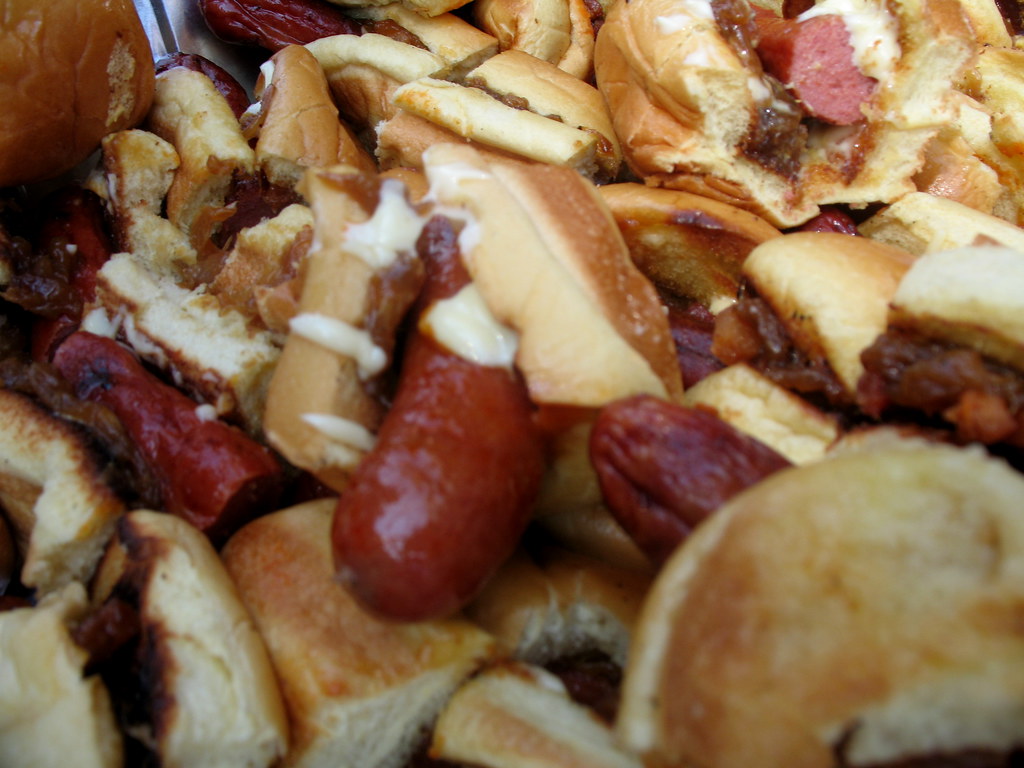 Is anyone surprised that the Great Hot Dog Cook-Off, which had raised $1,000 last year for charity with a sold-out crowd of 120, would quadruple its success this time around? Not I! And guessing from the way this year’s event sold out well in advance, it could have been even “greater.” The sizzle of competition gets hotter by the minute.

Sizzle is an excellent word for the action last Saturday at Clinton Hill craft brewery Kelso, where the 4th annual cook-off was held. The beer was flowing, condiments were flying, and frankfurters, wieners, dachsund-shaped sausages — hot dogs, were blistering on the outdoor grills all afternoon. It was a hot day in full sunlight, but the competition took place both inside the brewery and on the sidewalk just outside. With giant tanks of brew doing its thing inside the industrial space, graffiti on the brewery’s exterior, and new construction taking place on the street just opposite, this was a real Brooklyn block party. (Platters of hot dogs were passed around to the construction workers a few times.) 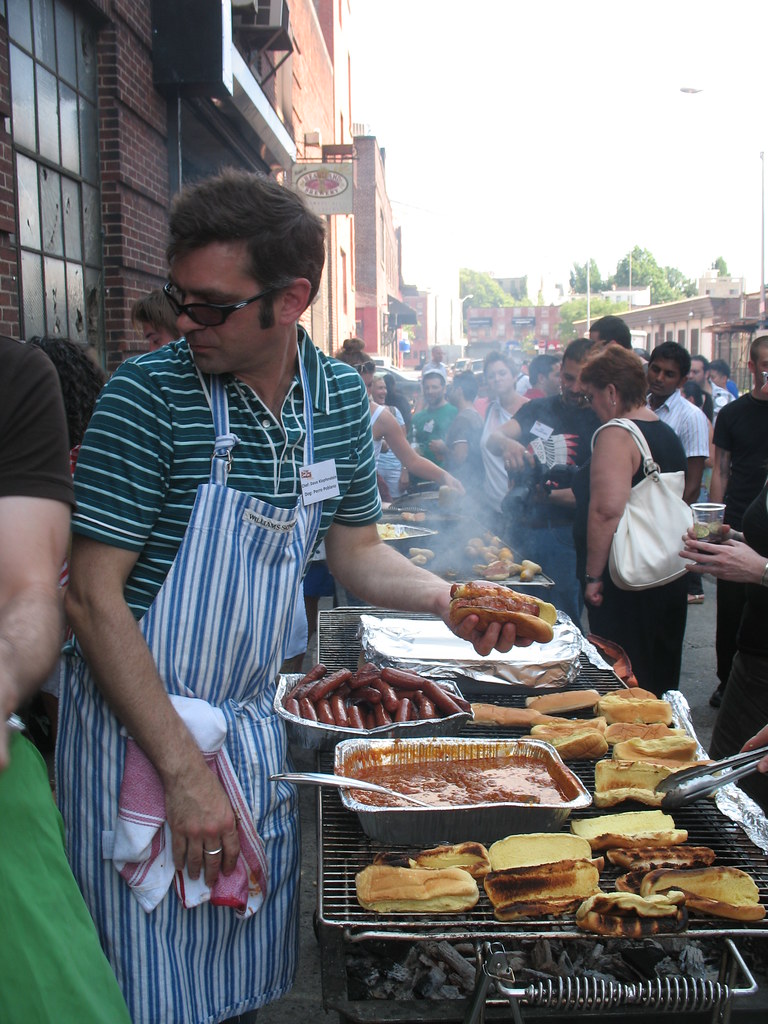 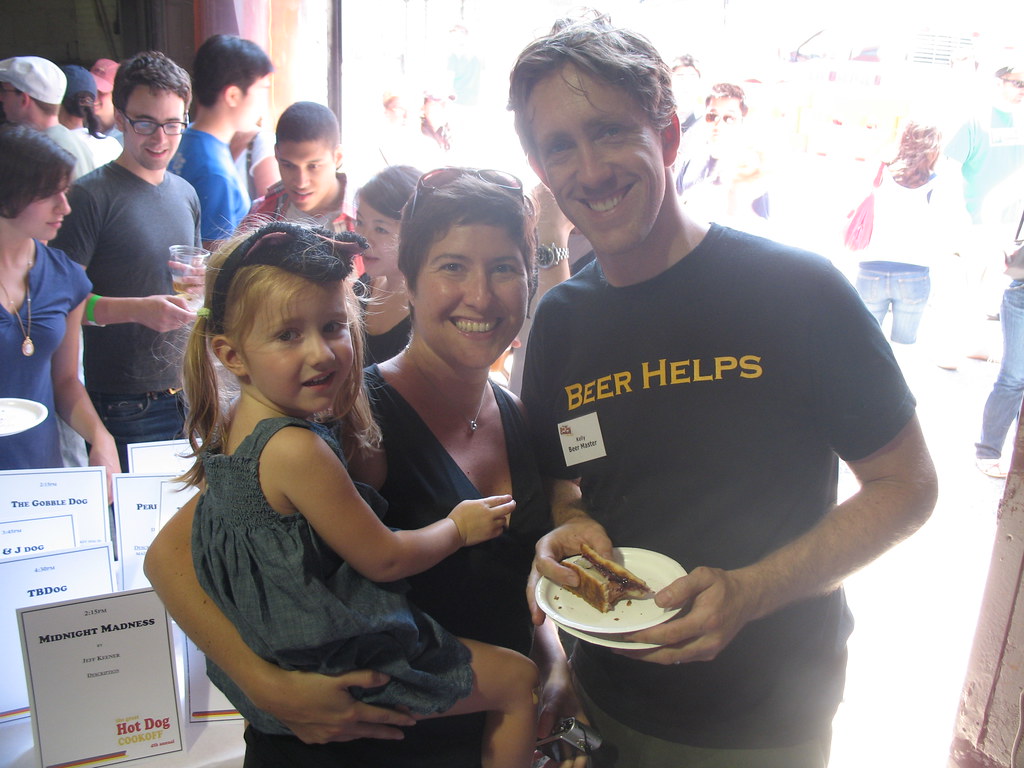 Kelso Brewery team: Sonya, Kelly and their little one 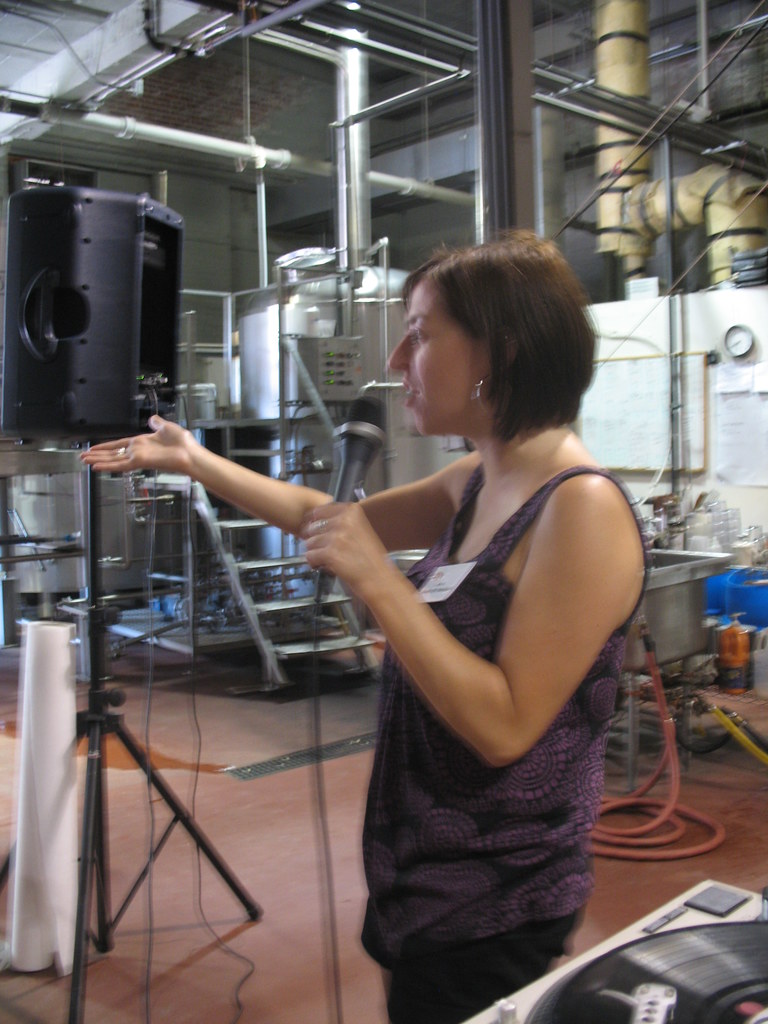 hostess Kara Masi at the mic

The premise of the hot dog cook-off is that the hot dog itself is a blank, familiar food canvas for chefs to gussy up with a style all their own. The genius behind it all is Kara Masi of Ted & Amy’s Supper Club, who began the annual event as a benefit for a local animal shelter (get it, dogs?). Deciding to branch off and benefit more charities, Kara invited me to co-host this cook-off last year, and we donated proceeds to the Food Bank for NYC. This year’s worthy beneficiary of the whopping $4,000 raised on Saturday is City Harvest.

There were many familiar faces from previous years, as well as newer cook-off zealouts entering for the first time, and plain-old hot dog geeks with their ear to the ground. You can bet that a group like this would deliver the goods. Where to start? There were hot dog allusions to all sorts of locations, like Nichelle Stephens’ (of Cupcakes Take the Cake) ode to Hawaii, with pineapple mustard sauce. Hers were also wrapped with pancetta and salumi while they fired on the grill, while Eric Michelson’s “Dog Date Afternoon” had a thick crust of bacon and dates. France made a big showing between Karol Lu’s baguette-stuffed “An American Hot Dog in Paris,” Arin Kramer and Ben Stein’s nod to the classic sandwich with sliced tofu dogs, “The Monte Cristofu,” and Noah Berland’s homemade croissant-cradled “The French” (though his entry officially went under the name, “The Reboot” for a scrapped idea of his). The contestants’ use of non-standard hot dog buns even went so far as to inspire a “Smoky Ravioli Dog,” by Chris Delmonico. But rather than stick to one geographical theme, most contestants mixed many, like the wild “Kimcheese-y Dog” by Gretchen Brinson, which had not only kimchee and cheese, but a fried egg, and was the only homemade hot dog itself in the competition. 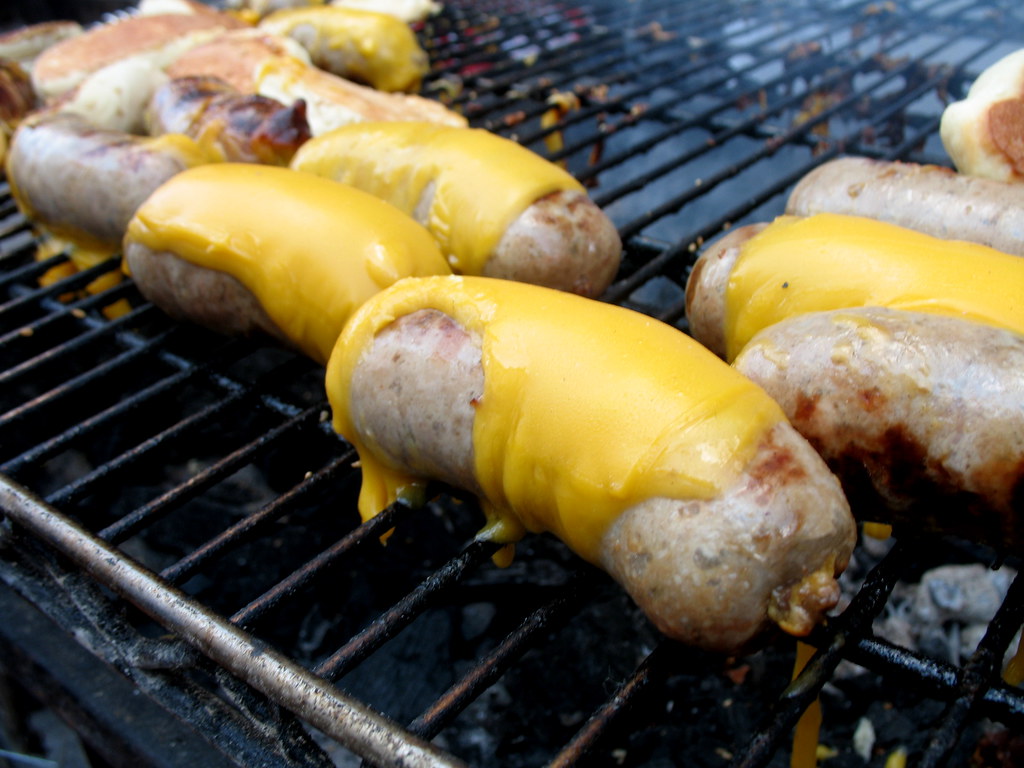 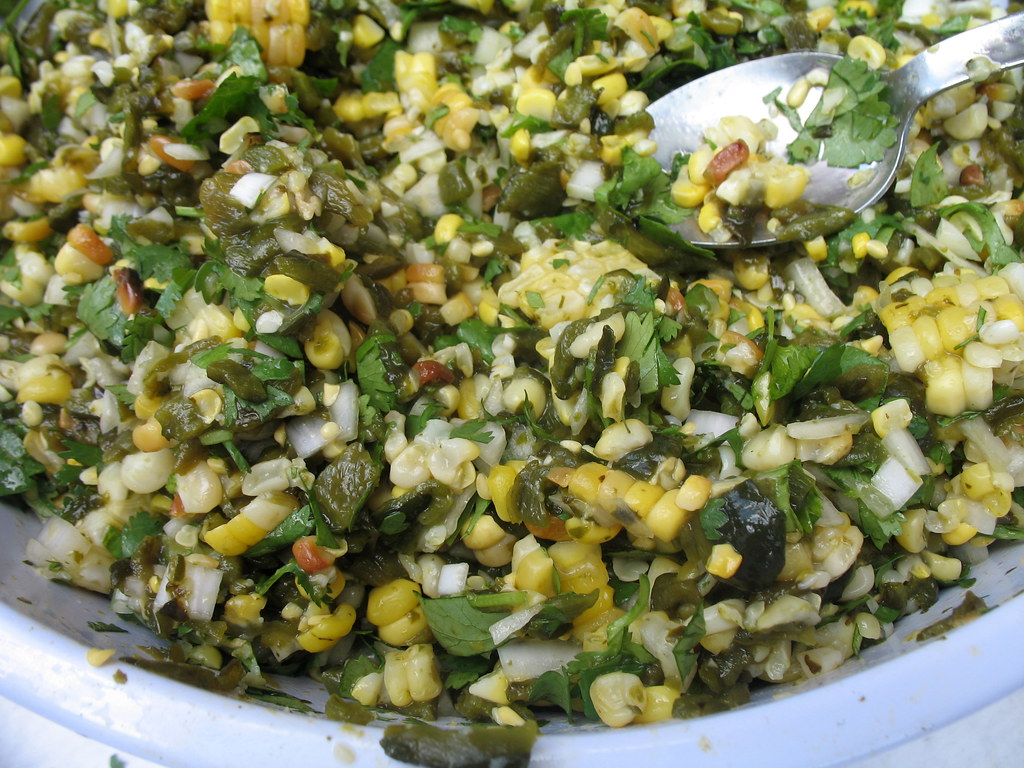 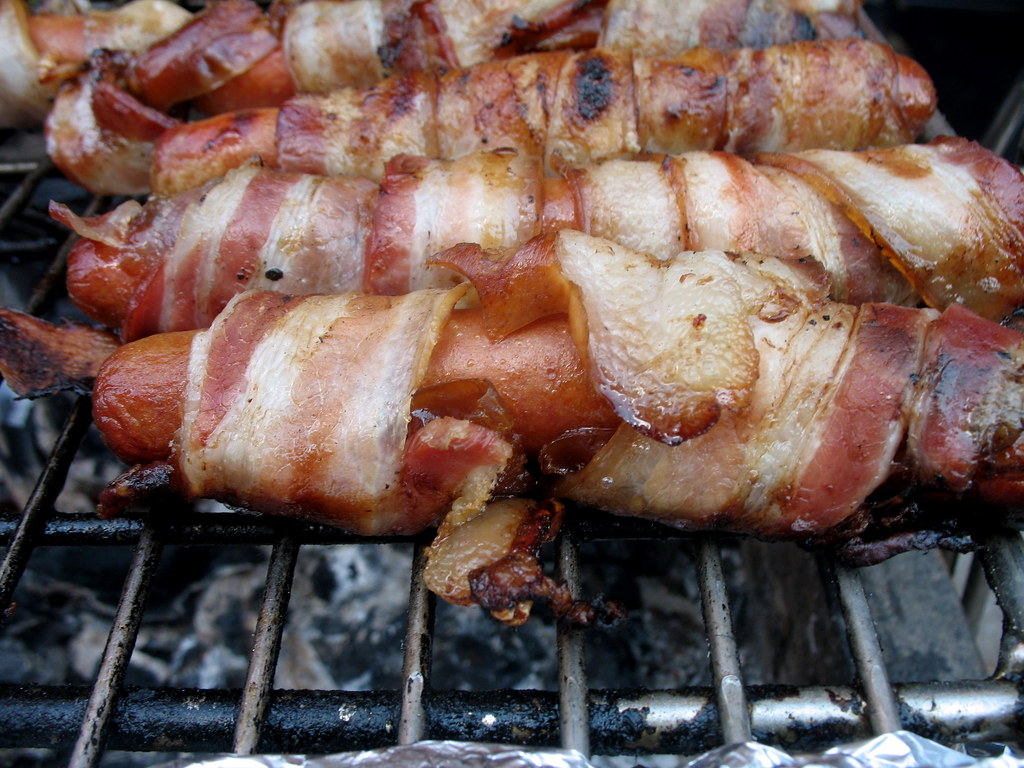 Erik Michaelson’s “Dog Date Afternoon” — didn’t we all have one?

And as long as we’re talking about cross-cultural references, I came up with a steamed Asian bun-based “Hapa Dog.” Inside it was a scoop of quick pickled red cabbage and red onion “kraut,” a hoisin-glazed grilled hot dog half, and fresh cilantro sprigs to top it off. When it was my turn to get grilling, I found myself brushing sauce on the dogs just like second-time contender Eric Friedman was doing on his half of the grill beside me. His “Pacific Surf Dog” could even be called hapa-esque, with its soy-sugar glaze, miso mustard and jicama and cabbage slaw.

Then, there were some uncanny deja-vus: a Thanksgiving-inspired hot dog resurfaced, this time from Bella Benjamin, whose “Gobble Dog” sat atop stuffing and corn mash drizzled in gravy; a classic “Colombian Supreme” hot dog was cooked up by Jonathan Morales, whereas last year Laena and Emma McCarthy gave their potato chip-topped Colombian-style hot dogs a squeeze of Laena and’09 teammate Liv’s homemade jams (this time they put jam in their “PB&J Dog”). And most triumphant of the redux moments, Eugene Kim defended his title for “Top Dog” or the Audience Favorite award with his “The Honeymooner” hot dog with fresh clams, mussels and sauteed mushrooms (his winner last year had goat cheese and mangoes). 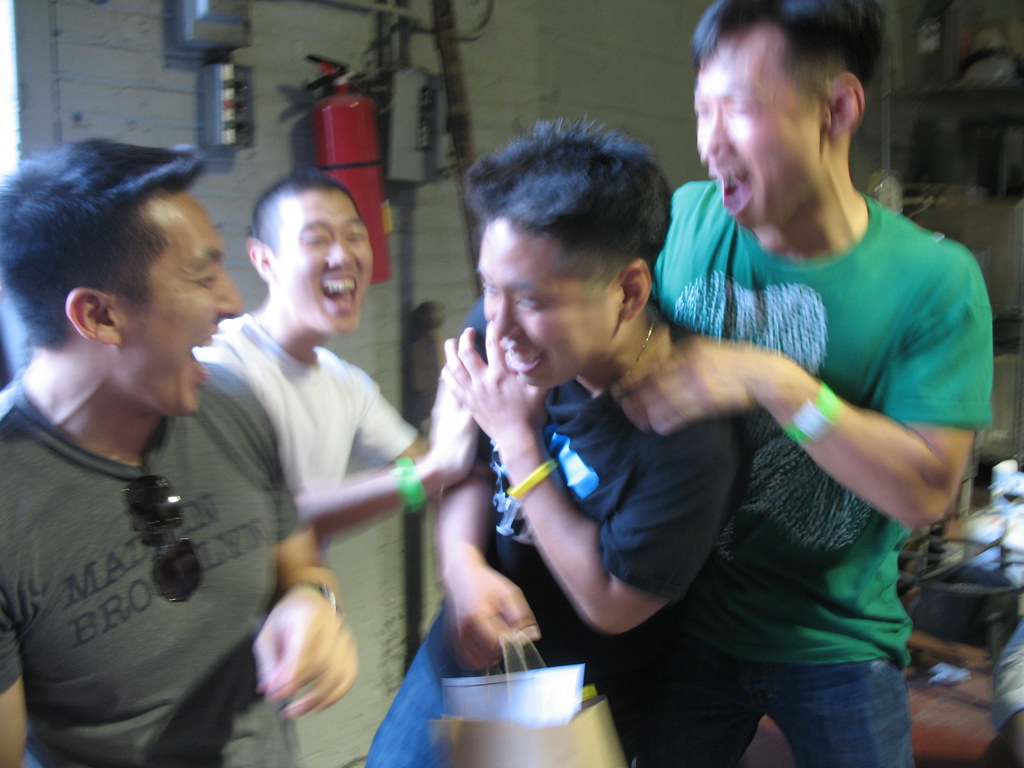 So we’ve already spilled one of the winners. Let’s talk about how they were determined. In Great Hot Dog Cook-Off fashion, the judges are picked from a hat after any audience member willing to critique them all put their names in. There were seven such judges this year. On the organizational front, Melissa Sands of Fork This took a co-hosting turn and helped come up with this year’s unique categories. There were five awards of the night, one for “Best Working Dog,” “Best Toy Dog” (the more elaborate versus the more classic, essentially), “Best Veggie Dog,” “Top Dog/Audience Favorite” and “Best Dog in Show.” Aside from the audience award, the rest were decided by the seven judges. Here’s who won them all:

That’s right, cook-off maven Nick Suarez stole the big win! And now I stole his winning recipe, to share! This was one savory, bright-flavored bite, with a crispy-fried corn salad on the side, cotija cheese and a lime wedge for garnish. Summery and refreshing. 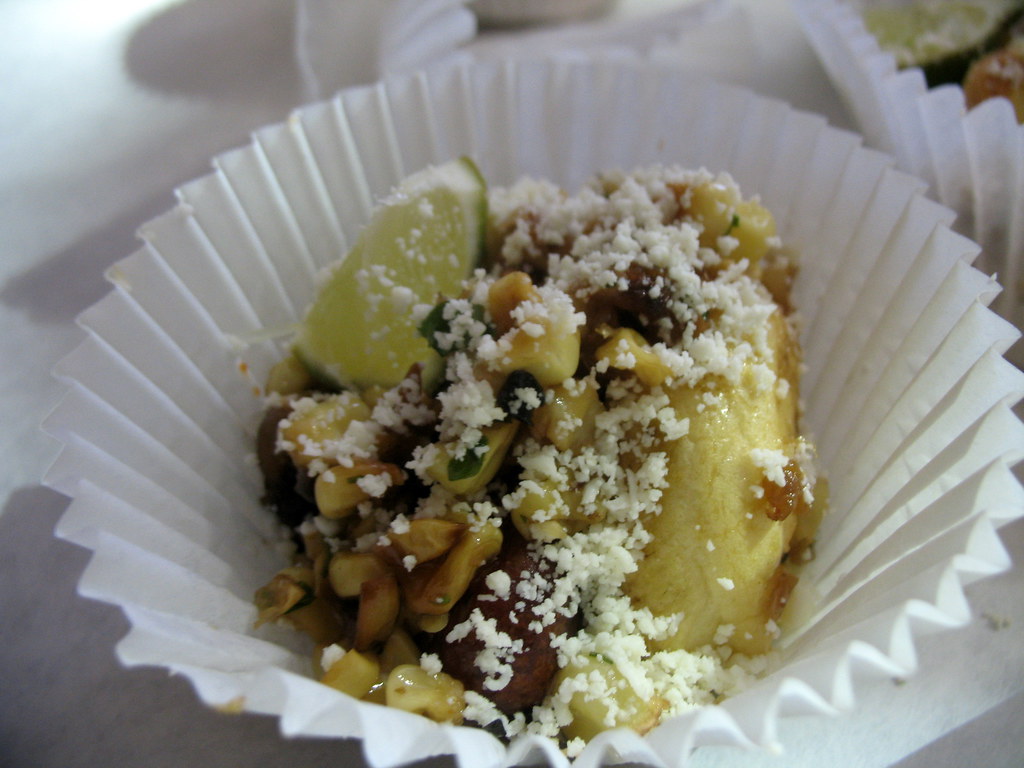 “The Corniest Dog in Brooklyn” 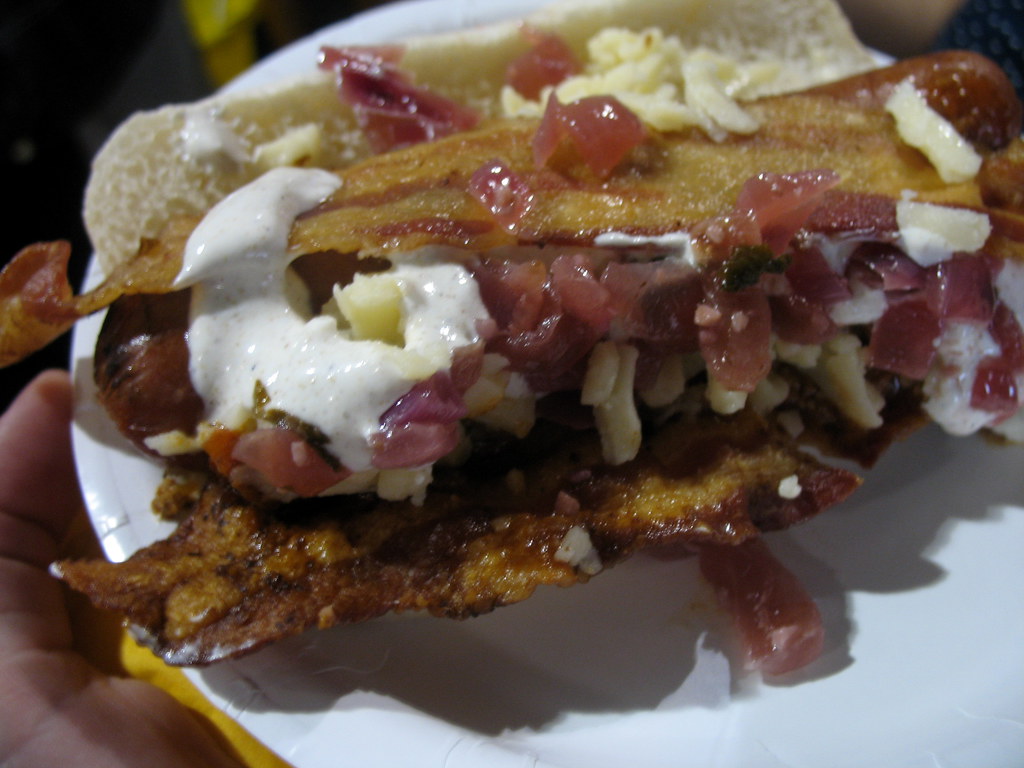 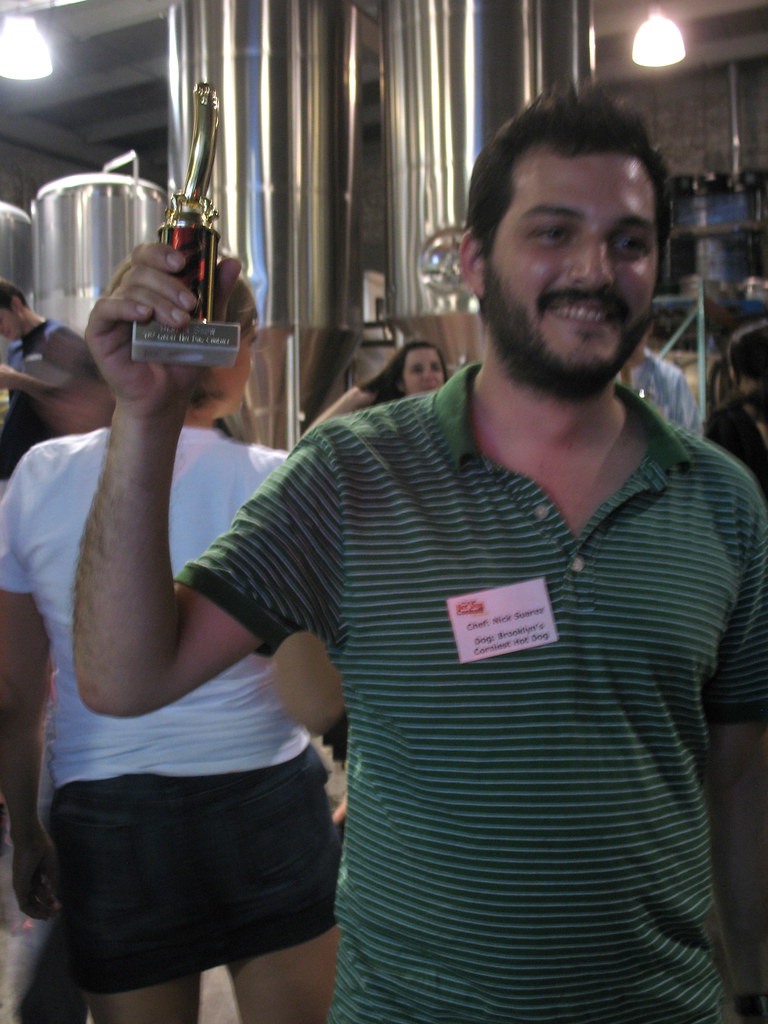 Nick Suarez, with an unconventional trophy

Arin and Ben fended off last year’s veggie dog champ, Karol Lu, and two-time contender Greg Galant with their really novel Monte Cristo take. I think they were the only team who came with their entry fully prepared, and didn’t use the grills. Their beautifully stacked grilled sandwich triangles were also speared with an olive-studded toothpick. No photos of them survived my all-too-quickness to gobble it up.

Scott Holt’s Displaced Wall Street Executive Dog had an elaborate explanation for the naming of which, and a fitting, all-out style. It had so many components it was impossible not to be delicious, and wickedly impressive to look at: two big strips of bacon per dog, a ladle of homemade chili, sauteed red onions, crema, and shredded cheese. Way to go!

And nope, the Hapa Dog didn’t win, nor did some exceptional entries by these chefs, but we all took home goody bags with City Harvest stuff in the end. Next time, just remind me not to improvise a steamer rack to steam buns on top of a grill, and start pulling random people from other teams to help me pull it off. Also, I’d accidentally ordered a “variety pack” of hot dogs from D’Artagnan for this feat, and it included franks made from beef, pork, buffalo and duck(!). I have no idea which ones the judges got!

Prep:
1) Caramelize onion in saute pan and set aside
2) Cut bacon into 1/4-inch cubes and saute until crispy, set aside
3) Cut the corn off its cob and sear the kernels in vegetable oil in a pan, set aside. Make sure some kernels are brown and crispy.
4) Add the chopped cilantro and season corn with a dash of salt and sugar
Grill:
1) Brush melted butter on the potato bun and char on grill
2) Grill hot dog until skin starts to split
Finish:
1) Squirt 1 line of mayo and 1 line of mustard on toasted bun
2) Spoon a layer of the caramelized onion as well as the bacon bits on bun
3) Place cooked hot dog on bun
4) Brush hot sauce onto hot dog
5) Spoon corn on top of hot dog
6) Squeeze lime and a handful of Cotija cheese on top.