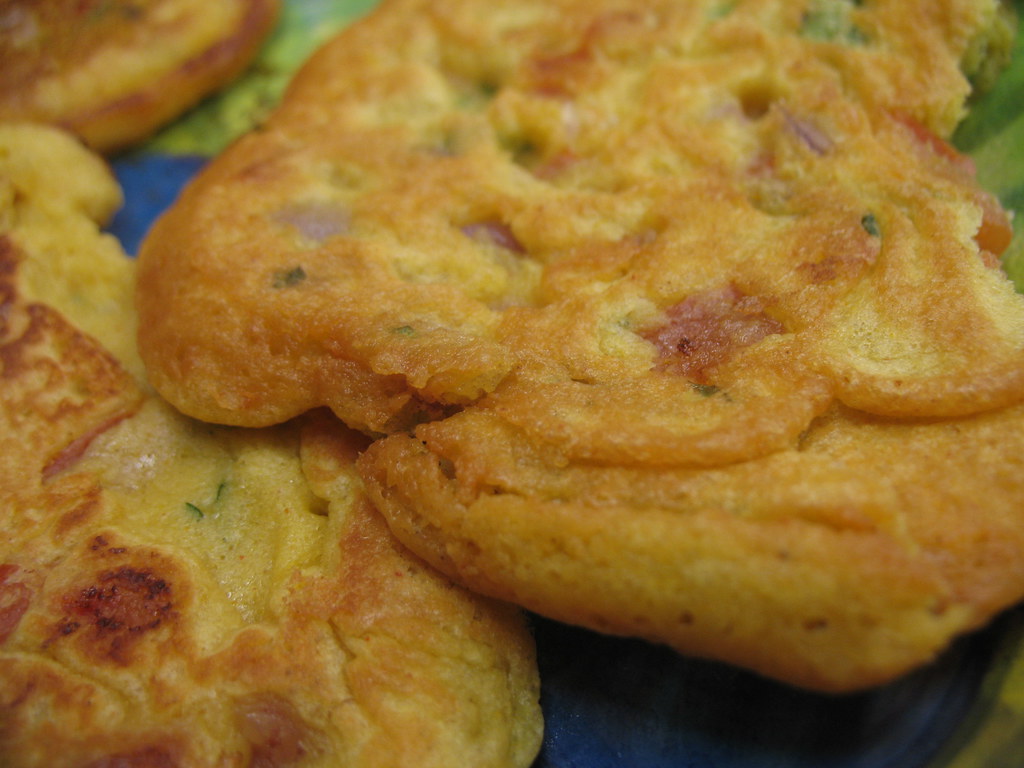 Chef Geetika Khanna did not have to make the best tomato curry-drenched lamb and turkey meatballs at the Curry Takedown to make me sign up for a class of hers. She didn’t even have to introduce herself to me at the event, proving to be as friendly a culinary expert as the rarity goes (in this world of Gordon Ramsays). When a class called “Simple, Healthful and Economical Weeknight Indian Meals” appeared on the calendar for the Indian Culinary Center, I was sold. And actually, she didn’t even need me to be sold on it, either; a full class of students, including some who were turned down after the seats were filled, were eager to learn these lessons.


I may have some experience under my belt in most of those adjectives in the class’s name, but Indian food is something that I’ve always wanted to learn more about. Begun in February, the ICC is Geetika’s school of intimate, hands-on cooking classes on the broad spectrum of just that. They’re held in the kitchen of a beautiful inn, which had previously served as the New School’s cooking classroom, before they cancelled the program. As a former chef and graduate of the French Culinary Institute, Geetika focuses on how to cook at home rather than cook like a pro, sharing her homespun know-how in the cuisine of her heritage. Interestingly, I was one of only three non-Indian Americans in the twelve-person class that night. Mostly young professionals, many of these students had grown up eating the same dishes and spices we were cooking that night, but admitted to never trying to cook any of it themselves. Or to cooking anything at home, for that matter. Geetika says she’ll have to fill up the August calendar with these weeknight-friendly and similar themed cooking classes, since they’ve been so popular. Get in on them before they get too hot. 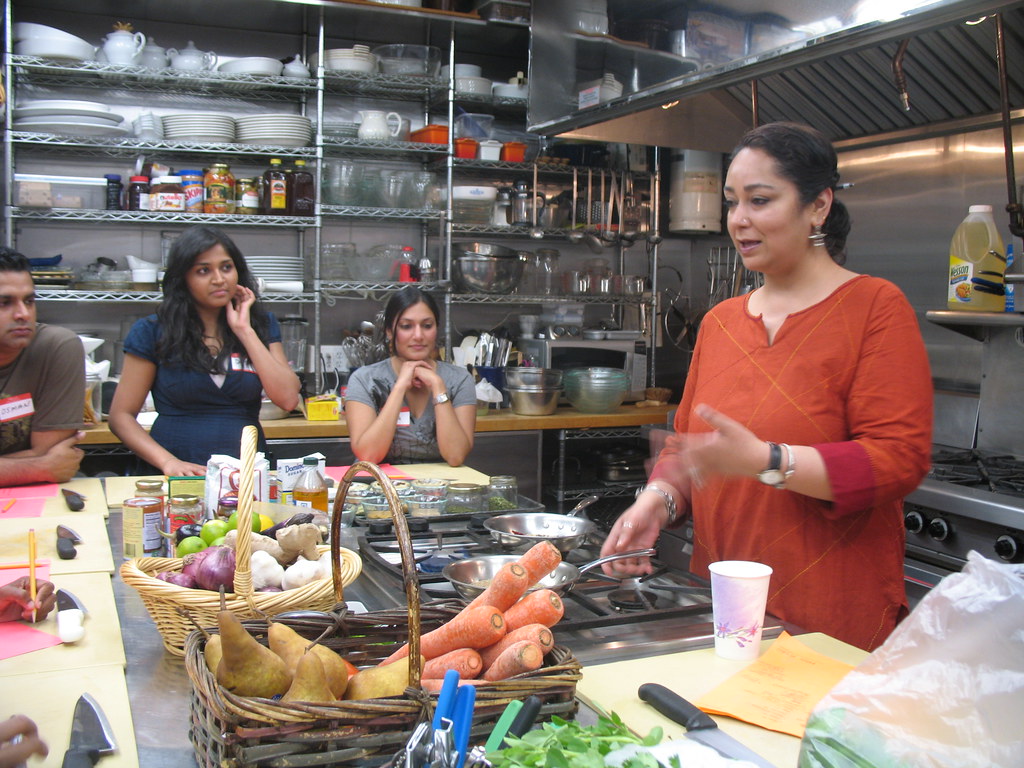 Geetika toasts cumin seeds to start off the class 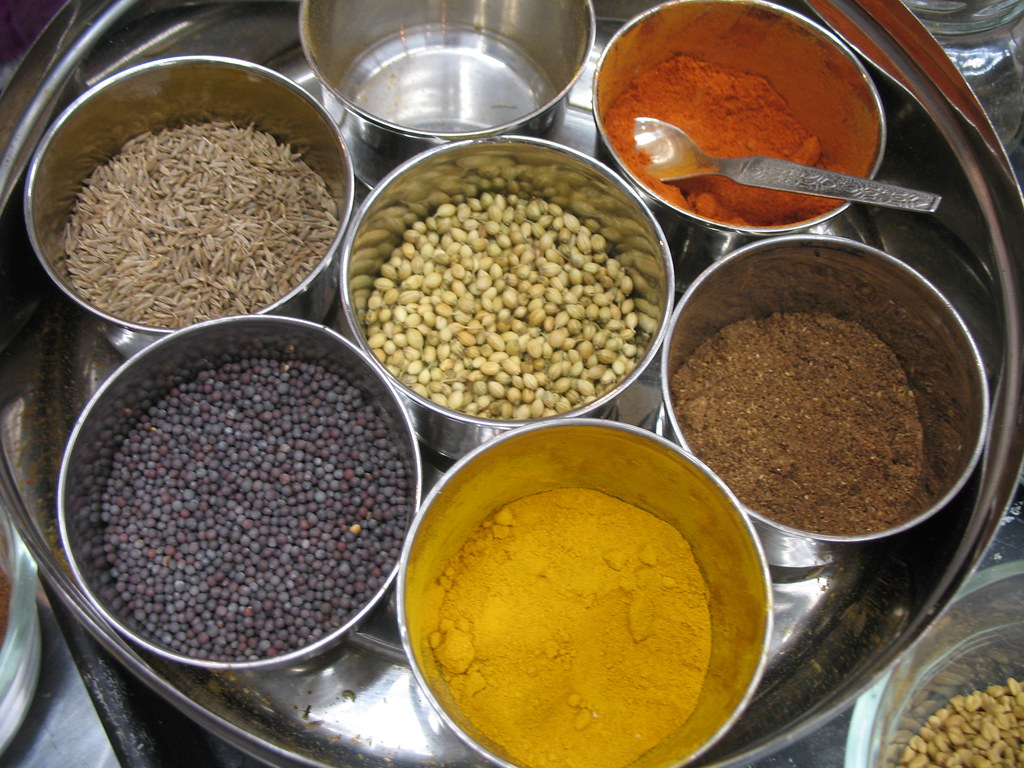 a household essential: a tin of spices

To start off, Geetika introduced us to some must-have spices. Best when they are toasted and ground oneself, either to use immediately or to store in jars, there are about five spices one needs to keep at bay to produce really simple Indian meals. The first she introduced us to was cumin. Short, needle-shaped seeds, these were toasted up in a heavy-bottomed skillet before getting crushed in a spice grinder (aka small coffee grinder) to a powder. Geetika produced a metal canister that held seven tins of spices, and explained that this was a staple among Indian households, much like a sewing kit. Along with the cumin seeds were turmeric, coriander seeds, black mustard seeds, cayenne and a freshly ground batch of toasted cumin seeds. When cooking most dishes, the black mustard seeds can be swapped in for yellow or green mustard seeds; it’s more of an aesthetic choice than for flavor, Geetika explained.

“There are very few things you should never do in the kitchen,” she said. “This is a free country.” She went on right then to assert her disgust for pasteurized, not fresh-squeezed lemon or lime juice that comes in a citrus-shaped squeeze bottle, one of the few don’ts in question. She also explained that cayenne is not actually an Indian type of chile pepper, but a North and South American one. After enduring some backlash from buddies on it, Geetika stuck to her guns and still uses cayenne just because she likes its flavor. “It’s so fruity and multi-dimensional,” she said of the deep red, talcum-fine powder that was passed around in a bowl to the class.

This spice was tossed into the batter for the first recipe we made that night, the chickpea flour pancakes. So simple, healthful and economic, I decided I had to post its recipe (and make it on a weeknight very soon). I’m a fan of savory pancakes from many countries, like the Korean-style shredded veggie-studded ones a few months back. Instead of wheat flour, these Indian pancakes are based on gram flour, or finely milled chickpeas, which instantly lend them a nutty, savory flavor. It can be found in any Indian and most Asian groceries. 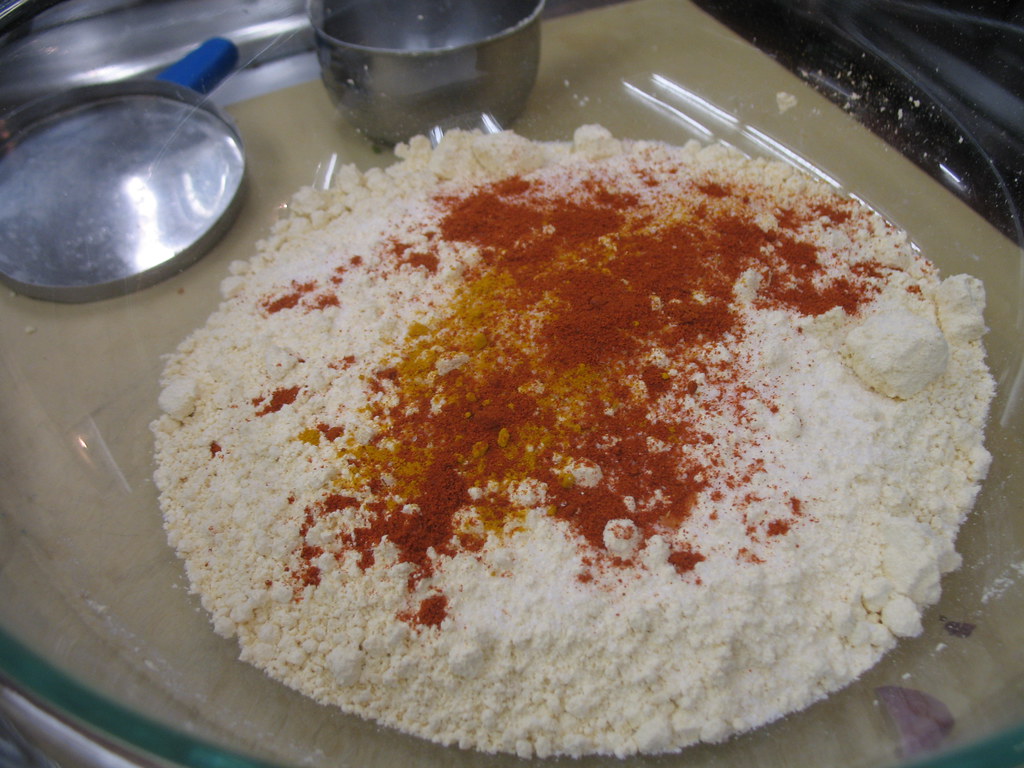 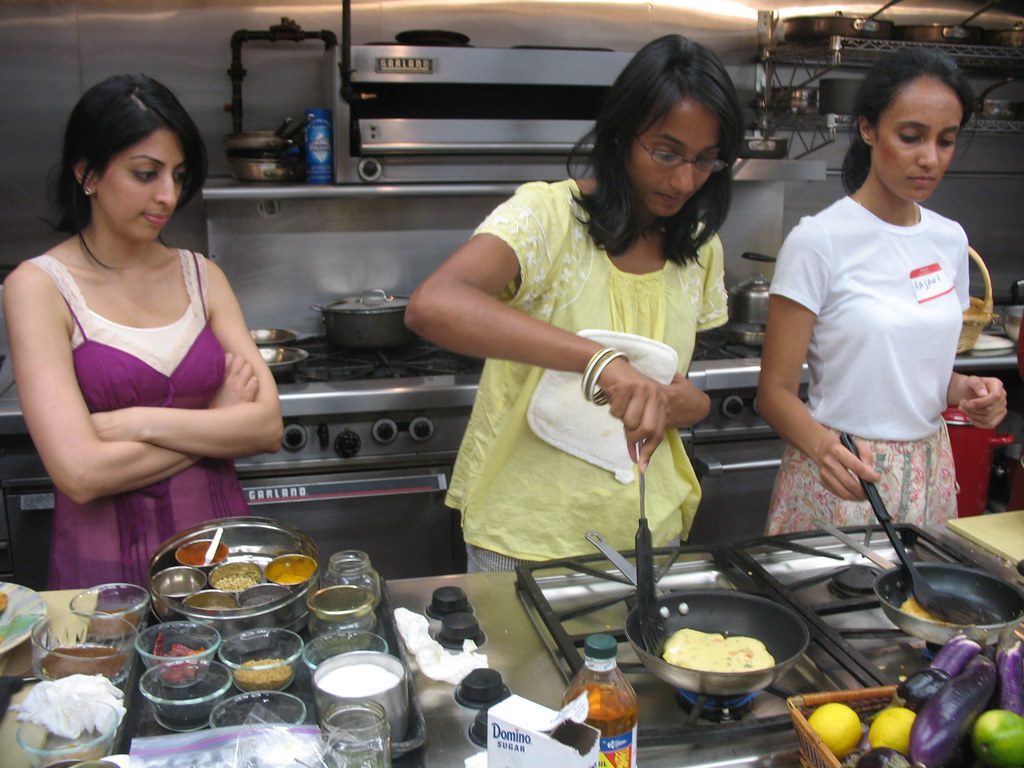 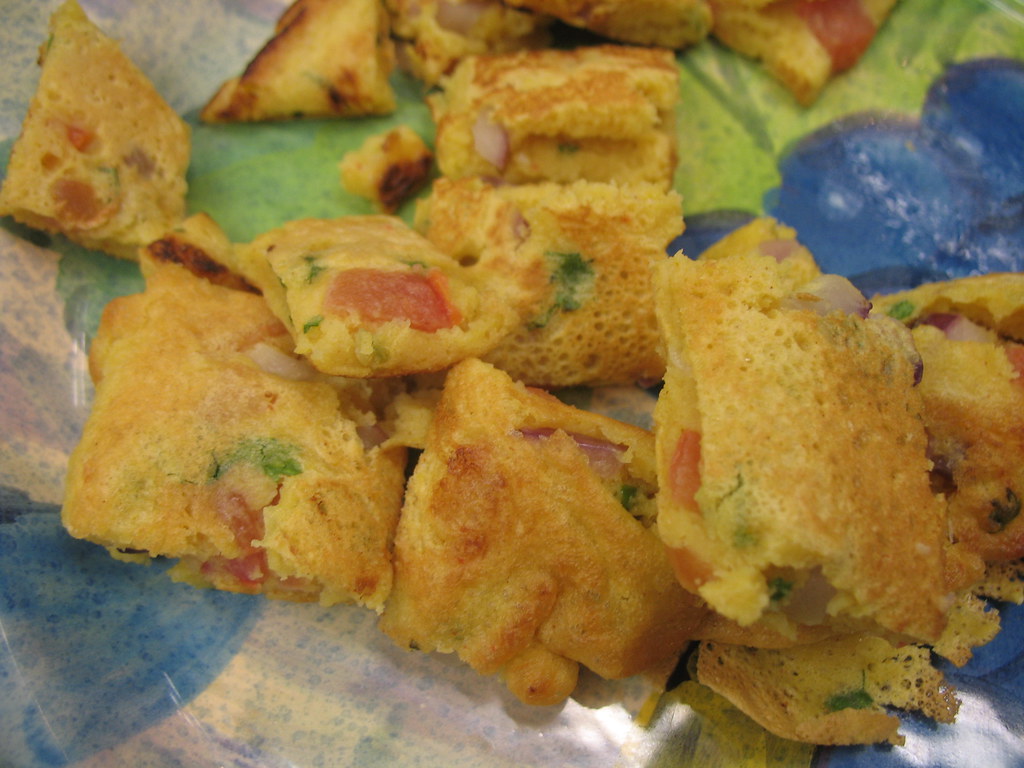 cut pieces of pancakes with tomatoes, red onion and jalapenos

Almost anything can be added to the pancake batter — vegetables, bits of meat and a spice combination of your choosing. Once it’s mixed up, a hot, oiled griddle or pan cooks them in more or less the same way American breakfast pancakes are. We each took turns at the stove making these pre-dinner snacks.

The classes at Indian Culinary Center are a hearty four hours long, ending with a communal meal of everything cooked. After the pancakes, we made chicken tikka, chicken tikka masala, paneer tikka (a firm, Indian cheese that was served to the class’s two vegetarians instead of chicken), a spicy Punjabi-style red bean stew (or Rajma), carrot and ginger soup, and chai-poached pears stuffed with spiced yogurt. Only the pear dessert and the soup weren’t traditionally Indian dishes, per se. But, as Geetika put it, “I am Indian, so it is.” (Can you tell yet that she is a delightfully opinionated lady?) 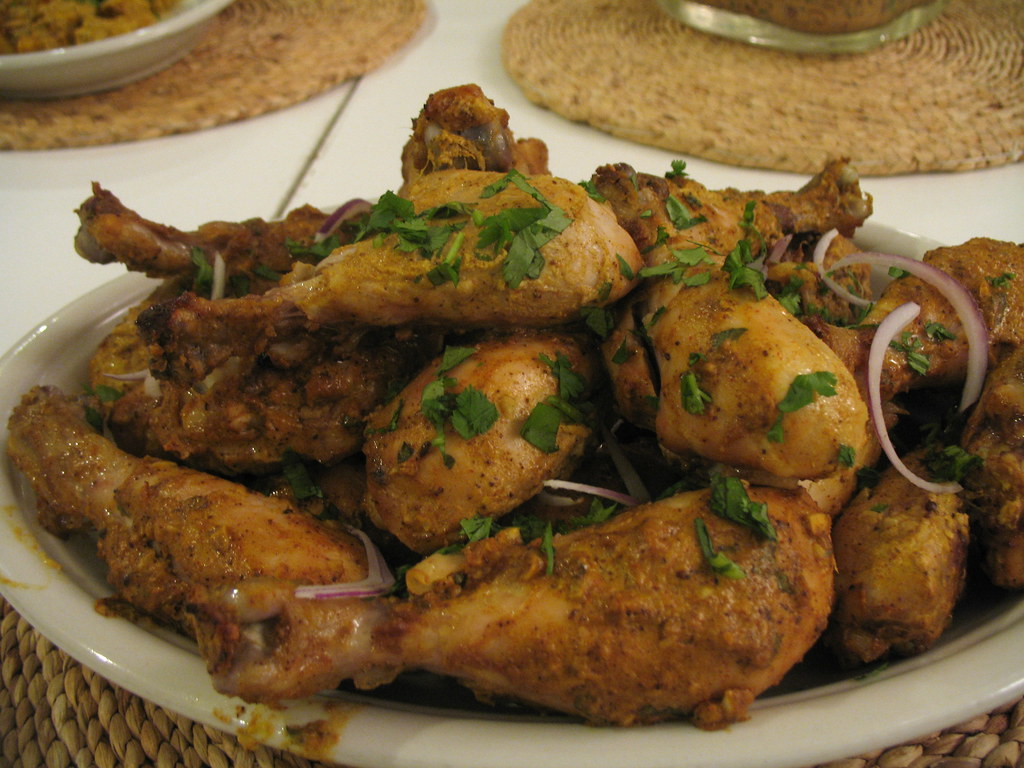 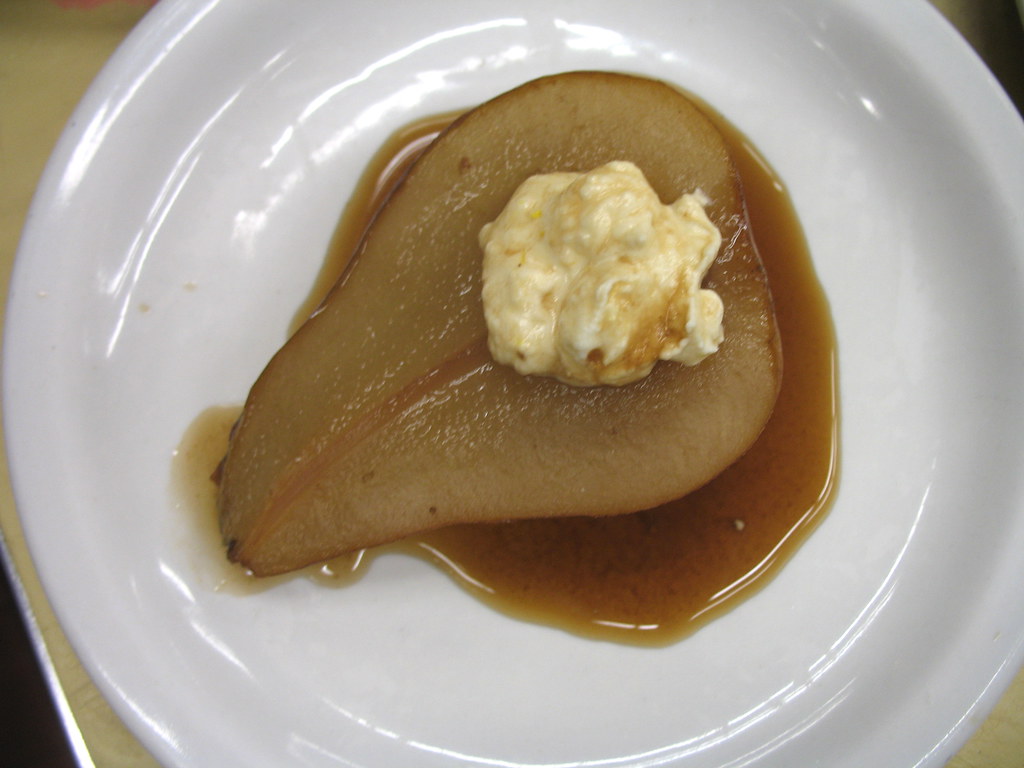 All were wonderful. In addition to learning how to make these easy Indian favorites, our class was offered some helpful tips about shopping and cooking on a budget. For instance, the chicken tikka could be made one night, and the next day served with a twist — as the saucy tikka masala dish — to save one from eating the same thing two nights in a row. All the foods we made were great for leftovers; in some cases, their flavors will blend and are even better than they were the first day, like the kidney bean stew. What’s so intimidating to many people about Indian cooking is all the spices involved, but after the brief intro to the five most essential ones, and how to toast ahead and store them (I’m getting one of those tins, ASAP), it really doesn’t seem so involved to cook with a ton of flavor each night. And since everything was so healthy, while delicious, it really makes the case for stocking up on spices instead of just slathering foods in lots of butter, bacon or salt.

I’ve already made an improvised riff on the kidney bean stew from this class, and have a newfound confidence in spice grinding and combining, which I’m sure will figure into many more foods from here on. Thanks to a few hours in the kitchen with Geetika, a packet of recipes and a perfectly delightful time with the group, Indian cooking is so much more approachable, budget- and time-friendly to me now. As well as just delicious.

Place 1/2 tablespoon of oil in a skillet (preferably nonstick) over medium heat. Stir once and place about 1/3 cup batter into center of skillet. Tilt pan to spread (as if making a crepe). Cover and cook for three minutes. Turn over and cook, uncovered, for one more minute; it should be golden. Repeat with remaining batter, stirring before using. Serve hot with chutney.