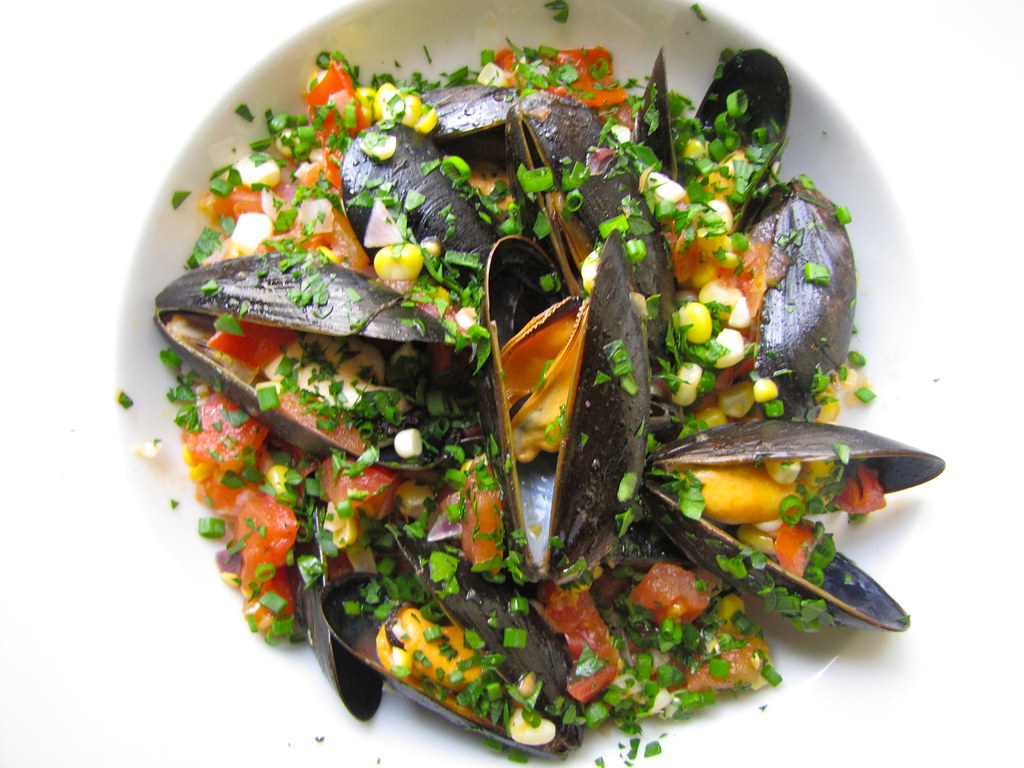 I really like mussels, clams, and shellfish of all kinds. You kind of have to, if you’re going to dig into a whole bowl of steamed mussels, served with bread to sop up its broth, or French fries in the classic “moules frites” tradition. But if you’re a little shy of encountering mussels in such quantity, then try perching a few kernels of sweet corn, soaked in a fresh tomato-based broth with garlic and freshly chopped herbs in the bowl of the shell while you suck the mollusk down. There’s no reason not to polish off the whole pot after that.


In Europe, mussels are often associated with pub food — that is, tasty bites to snack on and share with your group. They’re simple and quick to prepare, too, usually steamed in a pot of simmering white wine (or pale beer) with aromatics and garnished with a shower of fresh herbs. The juices released from the opened mussels instantly transform the broth into a savory, seawatery soup that’s irresistible. This tradition has carried on in the States. But since corn is such a quintessentially New World food, you’d be hard-pressed to find a version like this on the Continent. 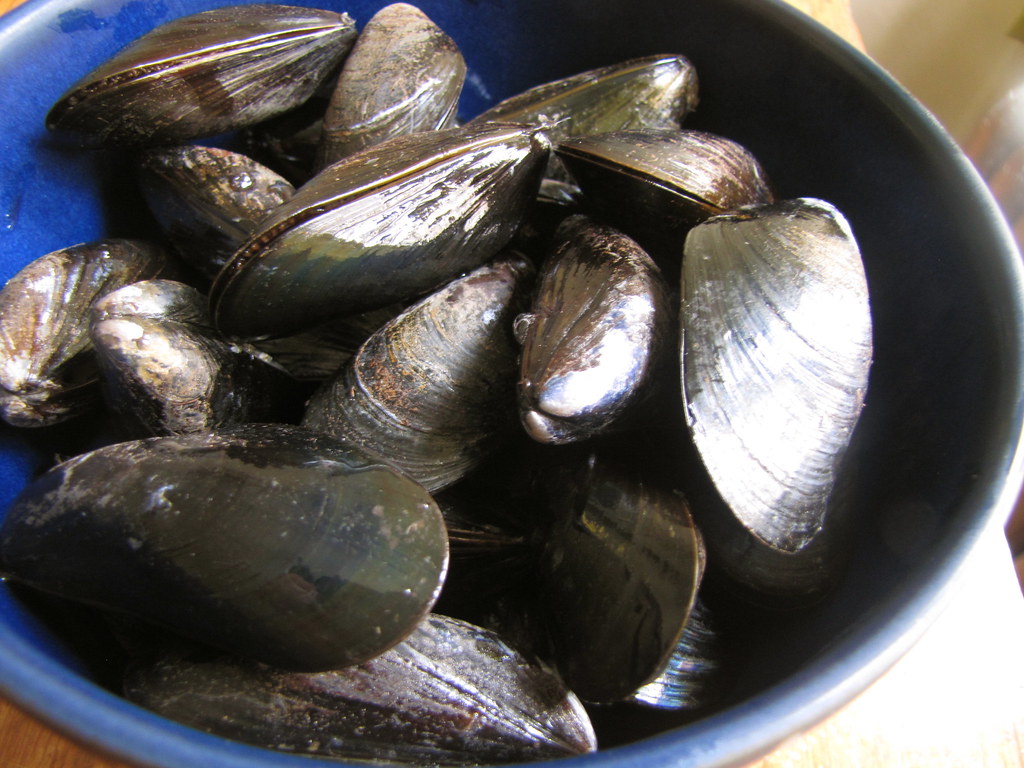 They’re missing out. This simple addition adds blissful texture and sweet flavor to the broth that just sings of summertime. Sweet corn has arrived from New Jersey farms already to the Greenmarkets in New York — pretty early in the season, it seems. I went with a fresh tomato-based broth for this batch because ripe tomatoes are plentiful now, too. A single clove of garlic and some finely chopped spring red onion (use shallots or leeks if you prefer) were softened with a little olive oil to start out. And a dry white wine — some Chardonnay — was brought to a roiling boil just before the mussels were dropped in and the lid closed shut. 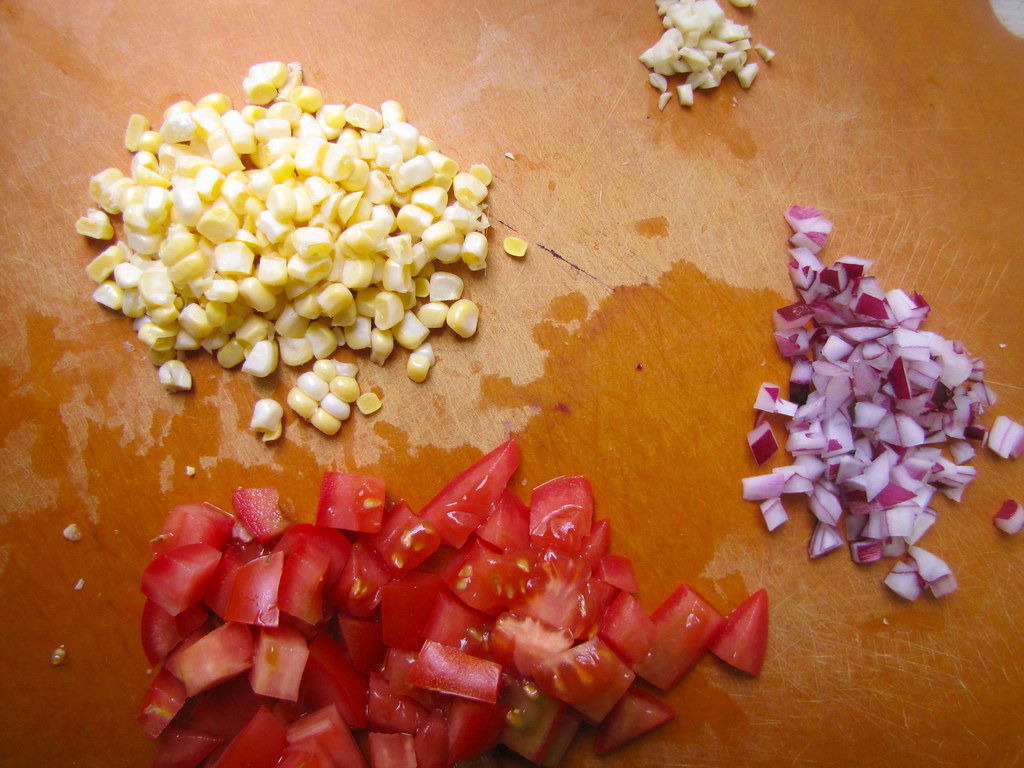 sweet corn, garlic, onion and tomatoes for a light broth 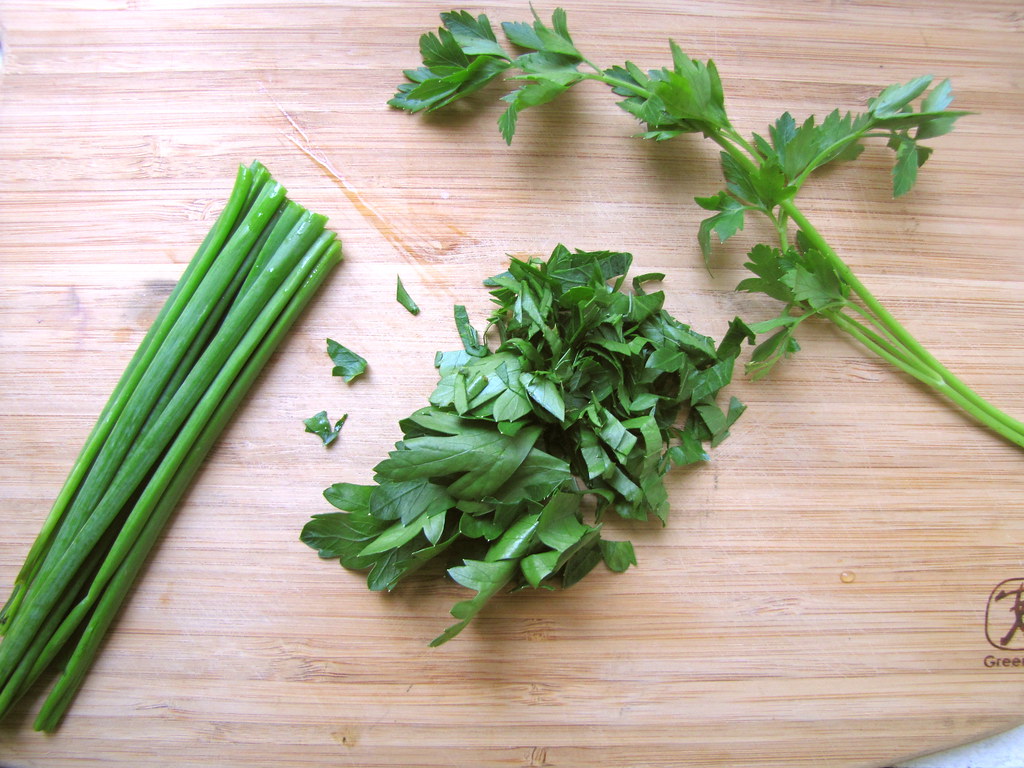 chives and parsley on the chopping block

Took all of three minutes to cook a dozen of mussels like this. Something magical happens inside that pot that belies the time it takes. Shells creak open, the mussels’ flesh swells, soaking in the flavors from the broth while lending it much of its own. The kitchen suddenly smells like a weekend at the beach. And then, it’s time to eat. 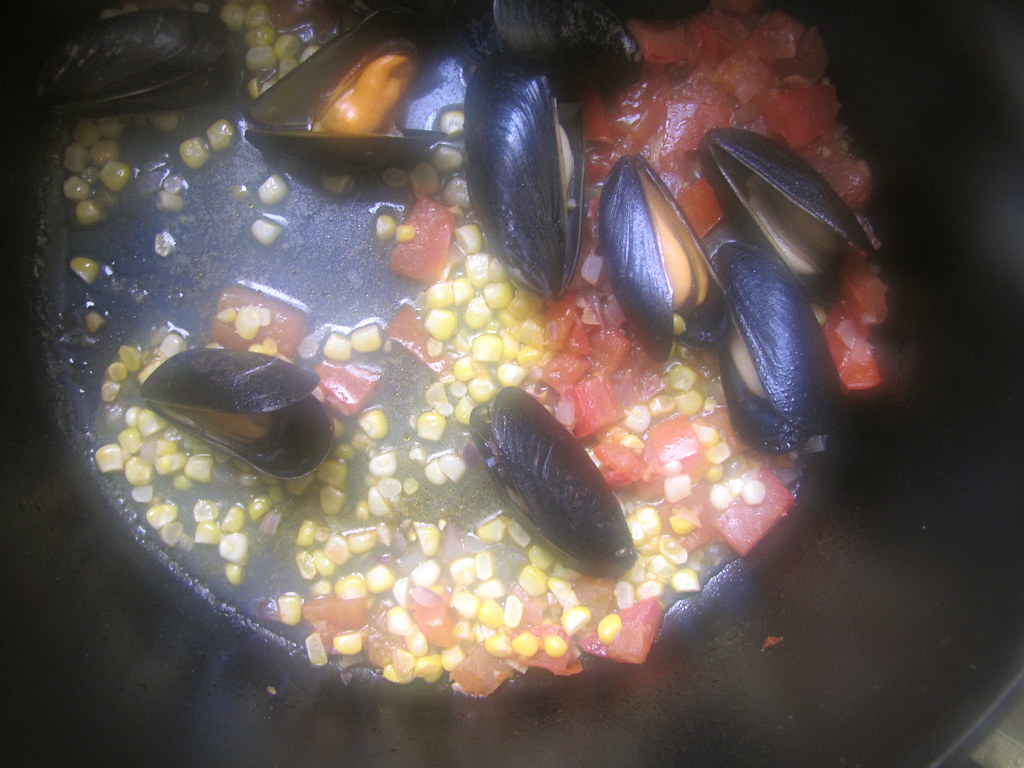 a peek inside the steaming pot

Grab some crusty bread to sop up this heavenly liquid while it’s fresh and piping-hot. Chop up any number of fresh herbs (I went with parsley and some chives) to sprinkle over the whole bowl. Grab your camera, too — this dish is really fun to photograph, and impress your friends with. Don’t hesitate to make this dish again for them soon; mussels make a great party platter that’s also ridiculously cost-efficient. They’re plentiful and sustainable along the East Coast of the States, and they were being sold by the Long Island fishmonger, Blue Moon Fish, at the Greenmarket for $3/lb. (A pound turned out to be slightly more than two dozen mussels, to my surprise!) So I guess I’ll be enjoying this meal again soon.

Rinse the mussels and gently scrub the shells. Be sure not to submerge them in tap water as they’ll suffocate; keep them in a colander while you rinse. Remove the “beards” from the mussels by pulling them off each one. Discard any broken ones or any ones that are gaping wide open. (Note: mussels like to open up and breathe while they’re stored, but usually close shut after a few moments of handling them, out of shyness. This means they’re certainly alive, which is what you want.)

In a large pot with a lid, heat the olive oil over medium heat and add the onions. Cook, stirring occasionally, and seasoning with a pinch of salt and pepper, until just softened, about 4 minutes. Add the garlic and tomatoes. Cook, stirring occasionally, another 3-4 minutes. Add another pinch of salt to taste. Add the wine, and bring to a boil. Add the mussels and corn and cover. Let cook for 5 minutes without opening the lid. Open the lid to peek in; if all the mussels’ shells are gaping open, remove from heat. If not, cover again and let cook another minute or so. Discard any mussels that simply do not open or open just a tiny bit. Transfer to a serving bowl, and top with the chopped herbs. Serve immediately.

Five brownie points: Mussels, like most shellfish, carry a fair share of cholesterol in addition to protein. However, according to studies, the protein per ounce in mussels rivals that of red meat, but with fewer overall fats and calories. Something to chew on. These bivalves also provide a good deal of vitamins and minerals in their flesh, including Vitamin C, B vitamins, and iron. Combined with fresh corn, tomatoes and an abundance of fresh herbs, this is a nutritious and relatively light dish with the looks of indulgence.

Eight maple leaves: Mussels are consistently a “Best Choice” seafood according to Monterey Bay Aquarium, since they’re plentiful and can be sustainably farmed all over. They are prone to accumulating dangerous toxins if present in their habitat, however. Unfortunately this has been a problem on the West Coast of America, and though toxins are monitored for seafood from these areas, it’s advised to avoid them during the summer months on the West Coast. Here in New York City, those mussels were locally harvested on Long Island, and found at the Greenmarket along with the corn, tomatoes and herbs, making this a nearly entirely locally-sourced meal except for the wine and olive oil.