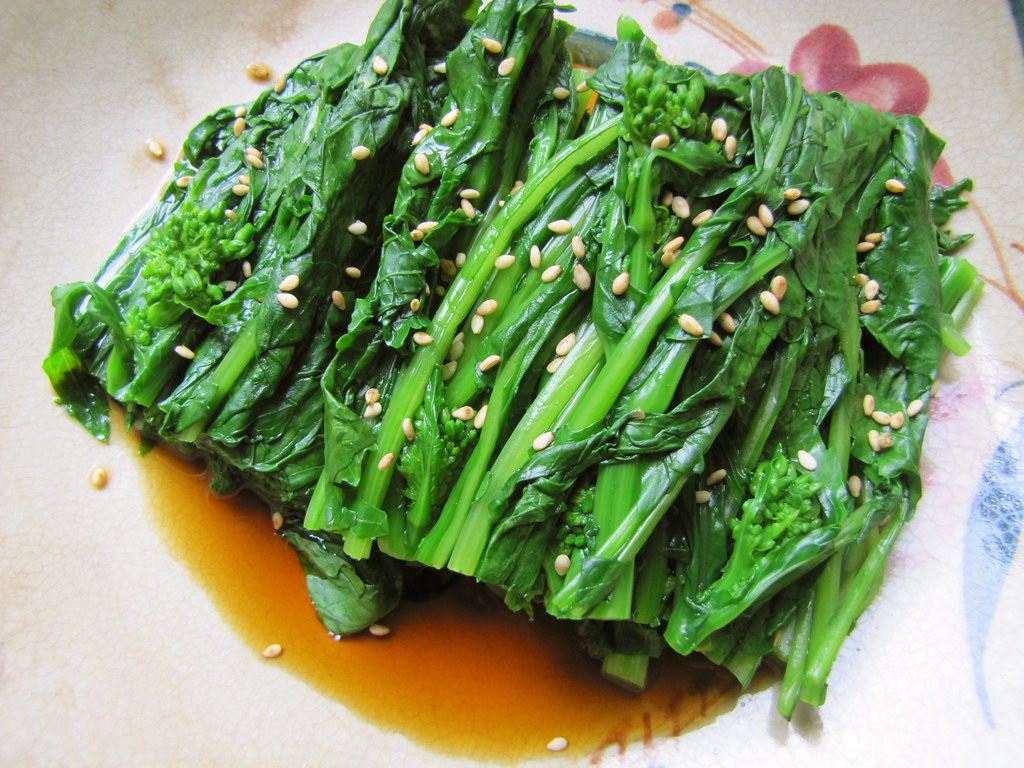 My latest favorite way to eat my greens is in the Japanese style of ohitashi, which is to blanche, shock, squeeze out, and pour over with a soy sauce and dashi mixture. It’s an easy way to stock up on your greens for the day, which there are plenty of in the spring. It softens the leaves, but also the stalks, which are typically left on and are delightful to crunch on dressed in this sauce.


Spinach is commonly found prepared this way in Japanese restaurants, but you can try it out at home with any type of greens — mustards, kale, Chinese broccoli, or broccoli rabe. I found a full bunch of broccoli rabe from Maxwell’s stand at the Union Square Greenmarket recently that was almost entirely leaves, save for a few yellow flowers poking out. The young greens are less bitter than the mature, flowering heads, and the stalks are much thinner and crisp rather than woody. So this was a great springtime find. 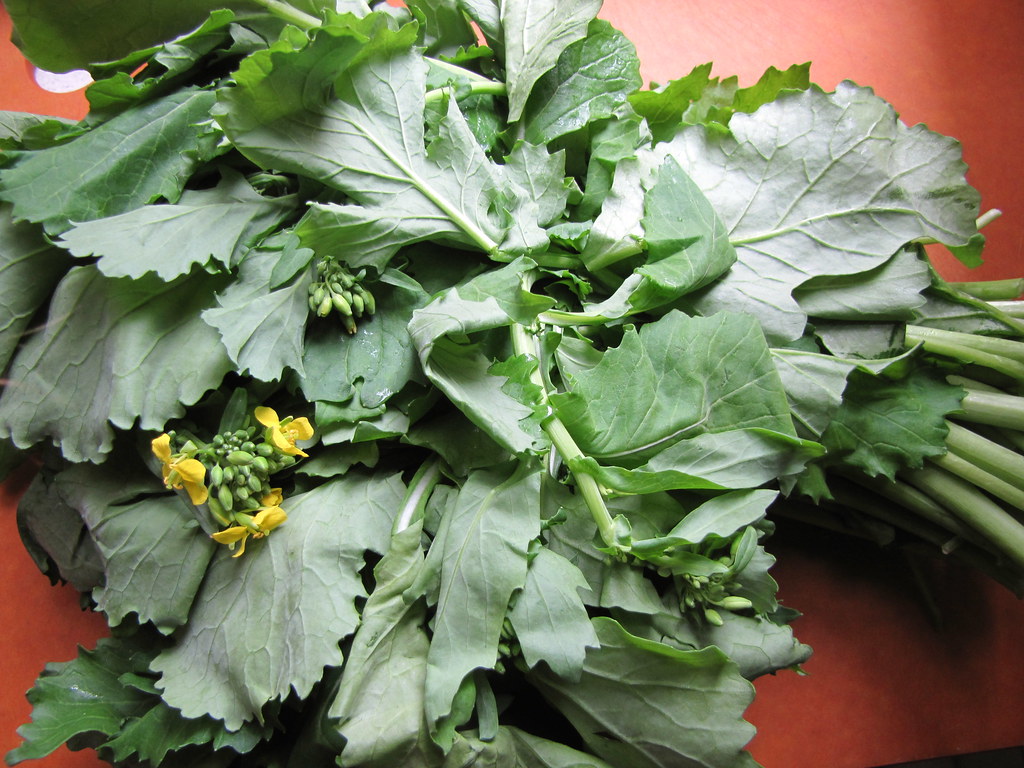 a bunch of flowering broccoli rabe

All of it is edible — the flowers, leaves and stalks. Combined they provide great contrasts for such a simple vegetable side. Add a sprinkle of sesame seeds as garnish for a touch more of that. It was so easy for me to eat a great bunch of the broccoli rabe that I was worried would wilt before getting to in just one sitting. Served with brown rice and maybe a small protein side, it’s an intensely savory part of a whole meal. Another great thing about this type of preparation is that there are no added oils.

Here’s a trick that’s typically done when preparing ohitashi: grab the greens by their tops and dip just the stalks into the boiling water for thirty seconds or so (depending on how thick they are) before letting go the rest. This cooks them longer than the leaves, and chopping them off beforehand would result in a messy tangle of pieces (which is so not Japanese). Try to keep the bunch in much the same formation while it undergoes a quick blanche; and also for when they’re transferred to an ice bath with tongs and removed to be squeezed dry. Then, chop up the bunch into neat thirds lengthwise to create small piles of mini log-like stalks and leaves. 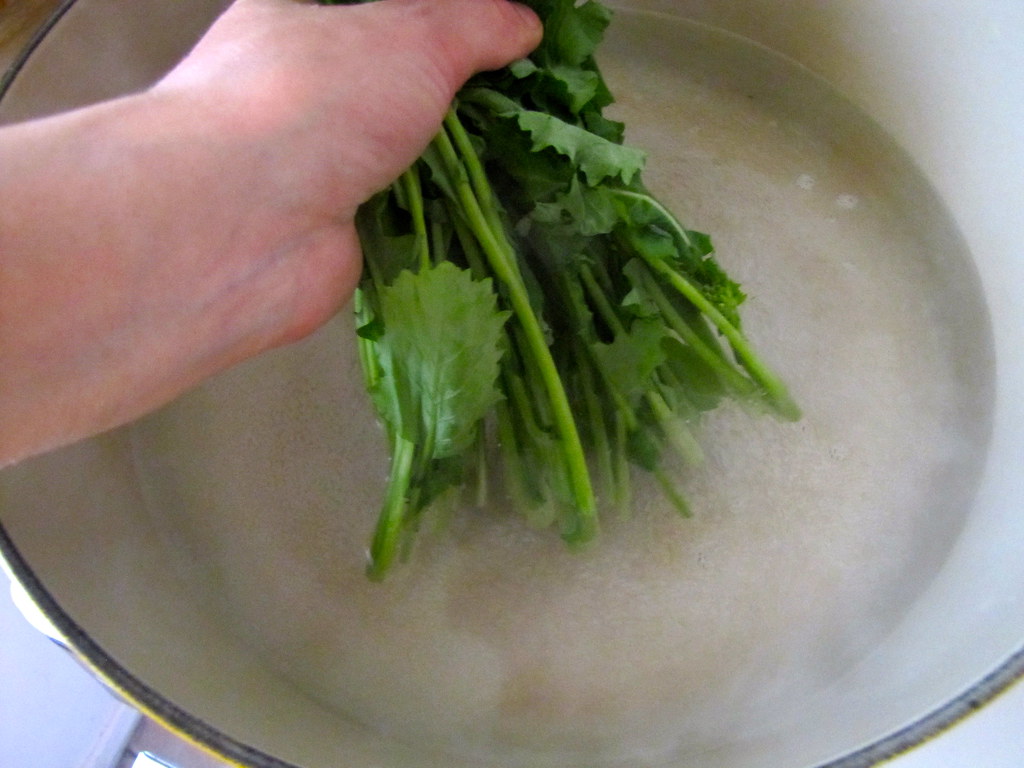 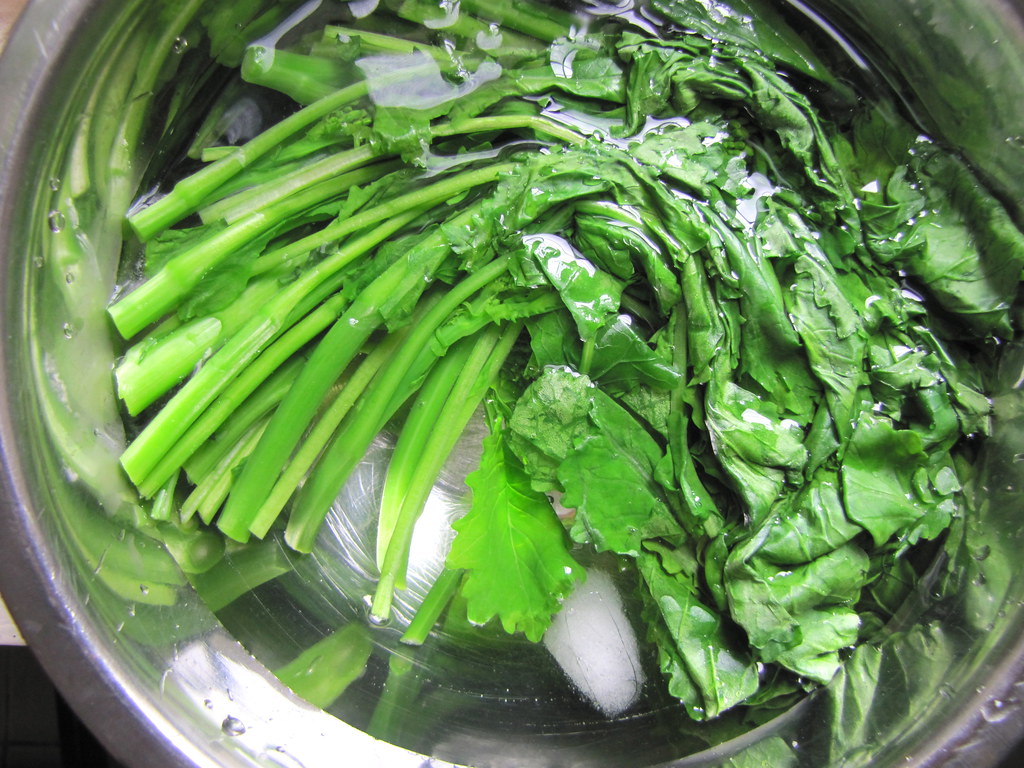 shocking in an ice bath 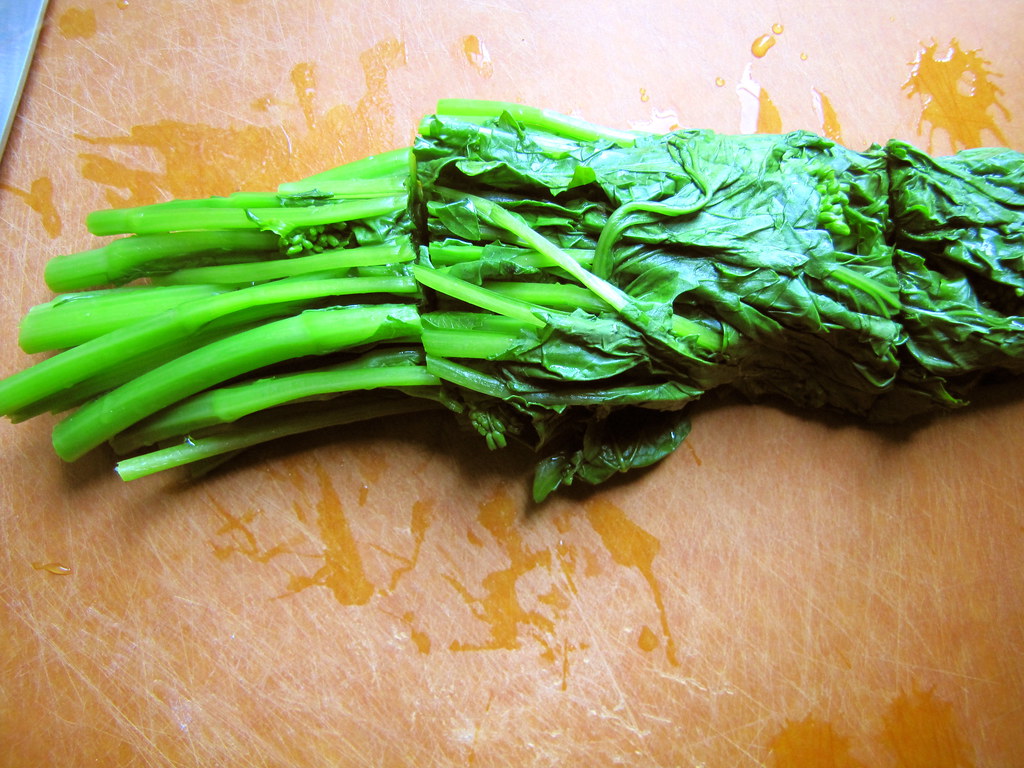 I made a recent trip to the Japanese market in the East Village (Sunrise Mart) recently and came back with some goodies, including shoyu. This is a lighter type of soy sauce, with less body and saltiness but a complex, fermented flavor that is umami all the way. You can also just go ahead and use regular soy sauce here, since it will be diluted with the dashi broth anyway. As for the dashi, the traditional soup stock of Japan, you can certainly make your own by soaking kombu seaweed for quite a while and infusing it with bonita flakes. But there are many reputable brands of all-natural instant dashi powders available too, so I thought I’d pick up some to try from the store. It did the trick in a fraction of the time. 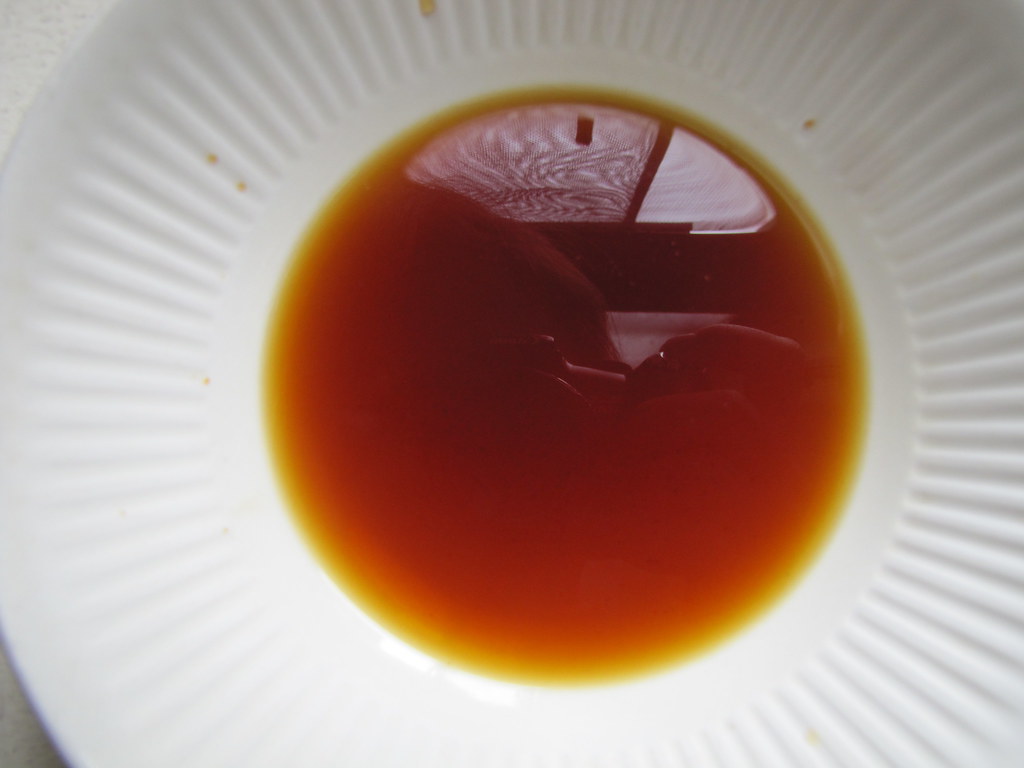 reddish-tinted shoyu and dashi are combined

Broccoli rabe and their leafy greens might not be too embraced by the canon of Japanese — and all of East Asian — greens, but it sure makes a convincing stand-in prepared this way. The spiciness and bitterness of the leaves plays well with the fishy, ferment-y flavors of the dressing. I might just have to take a daikon radish and sautee it with garlic and olive oil next. Food is universal, after all.

Wash and trim just the tips of the stalks from the broccoli rabe. Bring a large pot of water to a boil. Prepare an ice bath to transfer the greens to. Holding the bunch by the tops, dip just the stalks into the boiling water for thirty seconds to one minute, and let go to submerge the rest of the bunch. Blanche for about 1 minute longer, then transfer with tongs immediately to the ice bath. Squeeze the greens out well, then chop into thirds lengthwise. Arrange the pieces nearly in a serving platter. Combine the soy sauce and the dashi and pour over the greens. Garnish with the sesame seeds.

Three brownie points: Broccoli rabe, with its deep-colored leaves and bitter taste, is a powerful antioxidant that has more Vitamin K than you’ll need in a day per servings. It’s also a good source of fiber and protein. This being the main substance of this small dish, with minimal seasonings in the form of fermented soy sauce and broth, it doesn’t get much healthier for a vegetable side. The soy sauce does add significant sodium, but you’ll find that just a thin drizzle will carry flavor throughout the pile.

Eight maple leaves: Just one seasonal ingredient from the Greenmarket, with seasonings. But this time, instead of imported salt, pepper and olive oil, there’s imported soy sauce or shoyu and dashi powder. You’ll want to point out the dashi to any friends you might be serving it to who are strict vegetarians; since the soup is made with dried bonita flakes, it isn’t vegetarian.