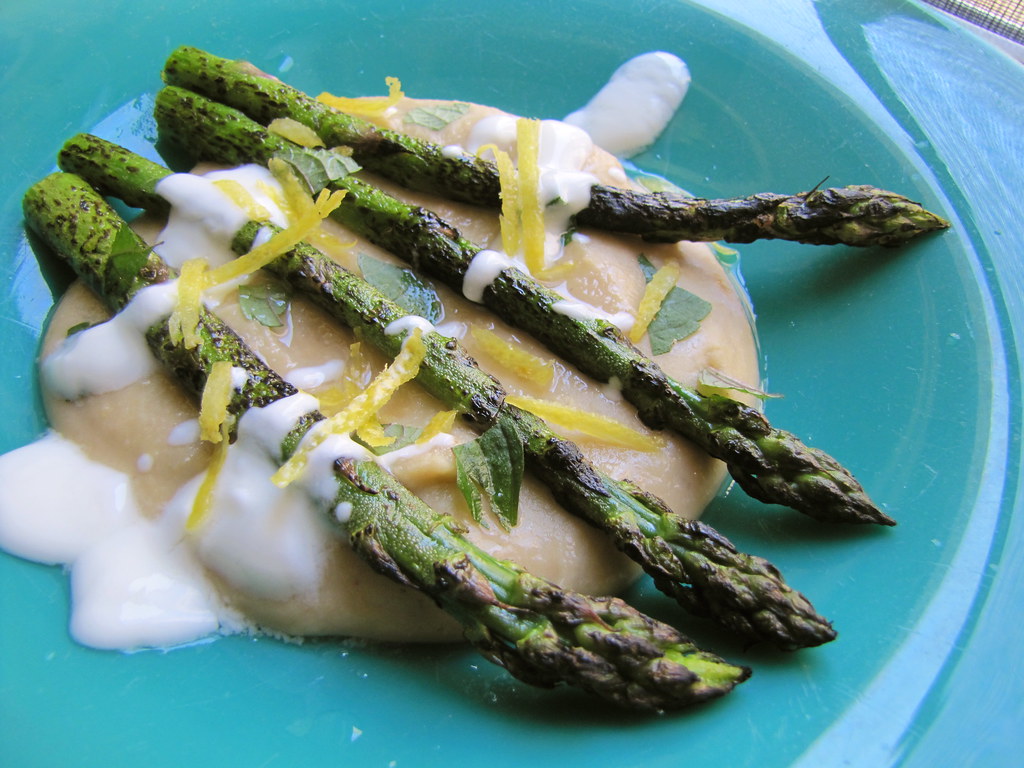 Grilled asparagus is such a pure, seasonal delight it really needs little embellishment to serve. But if you want to round it out to a light meal, here’s an easy and healthful way. I went Middle Eastern with the accoutrements for this dish, blending up a creamy red lentil base and lavishing it with some tangy yogurt, fresh mint and lemon. Combined with some char on the asparagus, it’s both cooling and savory, a satisfying snack indeed.


So if you’re tired of simply plopping a poached egg on your asparagus this spring, here’s a fun alternative. The steps are a lot easier than it seems, as long as you have a blender or processor of some sort to puree the lentils. Red lentils, unlike tougher, green ones — or most other dried legumes — cook very efficiently, softening to an easy-to-smooth texture in about ten minutes’ time. They also have a considerably less dull color, which although is not really red, contrasts with the asparagus much more than greenish-brown ones would. 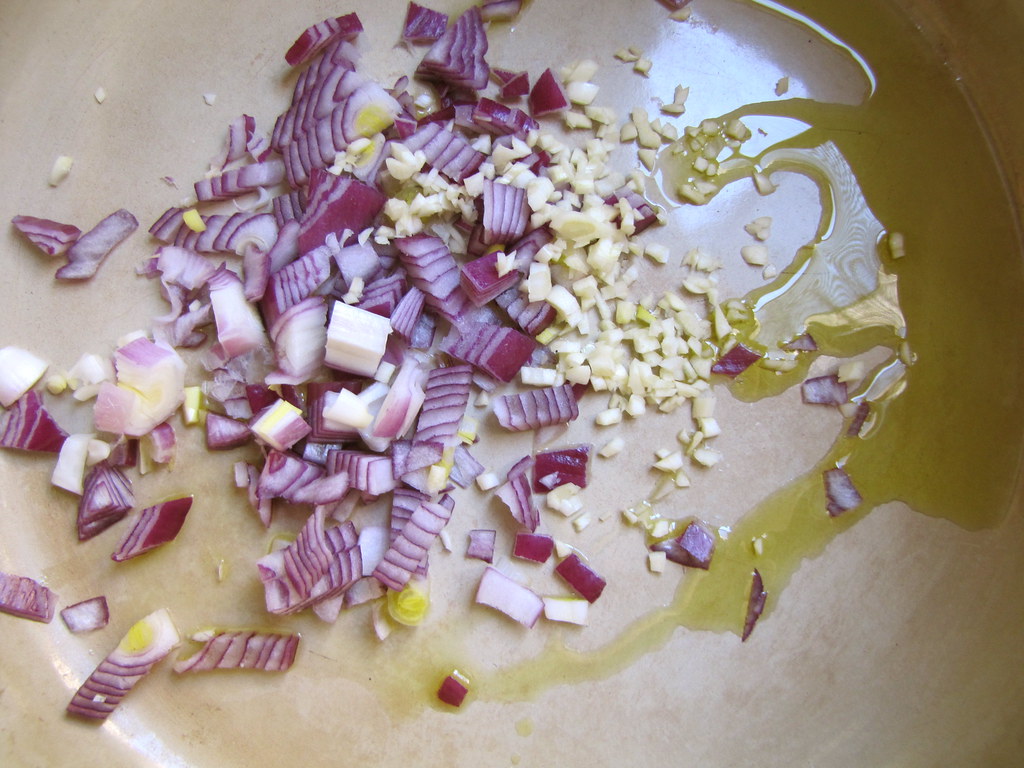 chopped onion and garlic are softened for the lentil puree 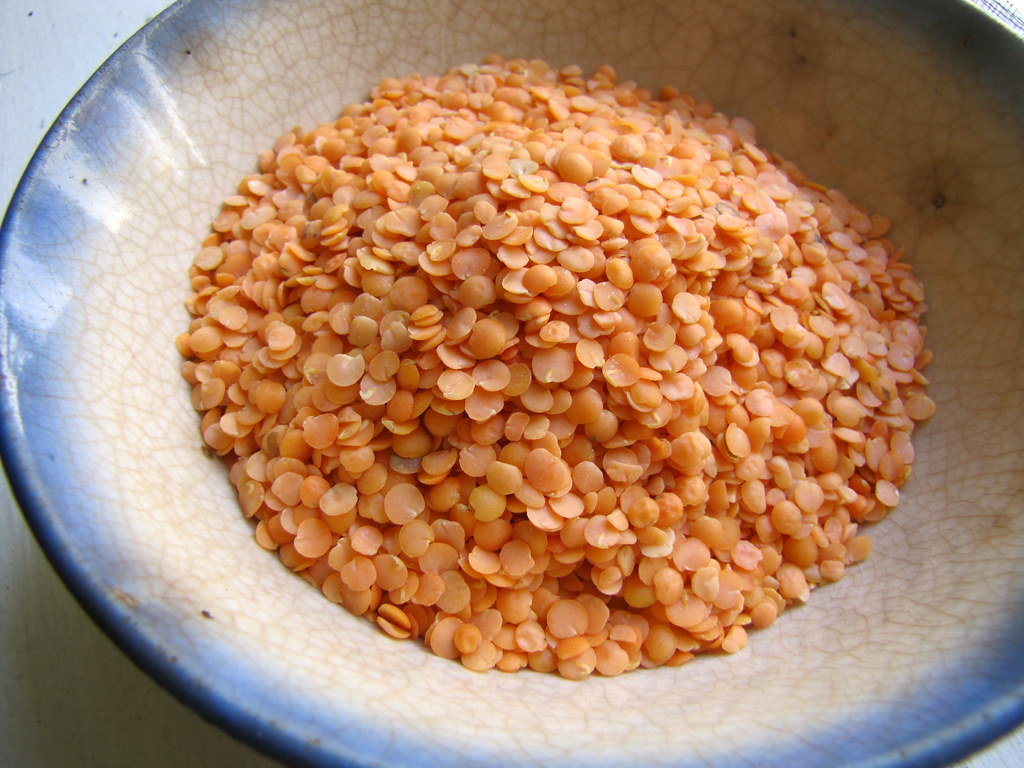 I began the lentil puree by softening some chopped onion and garlic cloves in olive oil. A little salt and pepper, but not much for spices this time. You can add a pinch of cayenne or cumin if you like a dash of spice in the mix, but here I kept it simple (a good squeeze of fresh lemon juice in the end was all). The lentils are added to the pot, along with enough water to cover by about half an inch. (Also, you may use stock.) Simmered covered for ten minutes, while checking to make sure it didn’t run dry, the mixture was ready for a few spins in the food processor. 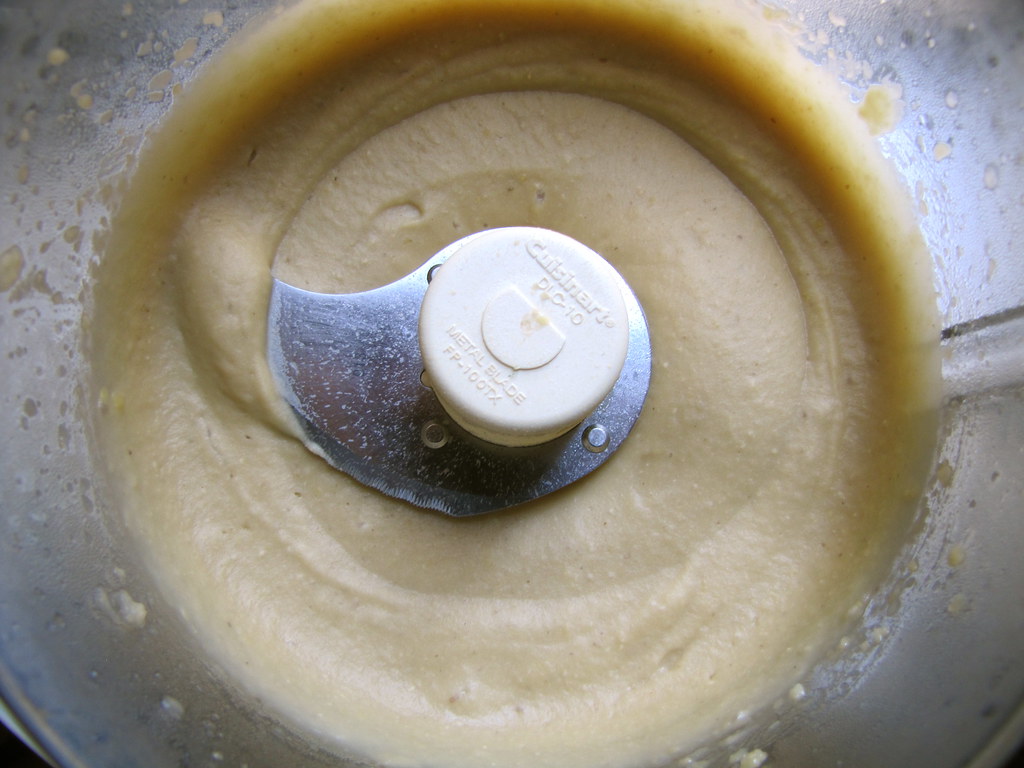 after a quick pulse

I drizzled in some extra olive oil along with salt and pepper to taste for the last couple churns, along with some fresh lemon. The puree almost resembles hummus, but I wanted to keep it a thinner, soupier consistency to serve as a pool on which to pile the asparagus. 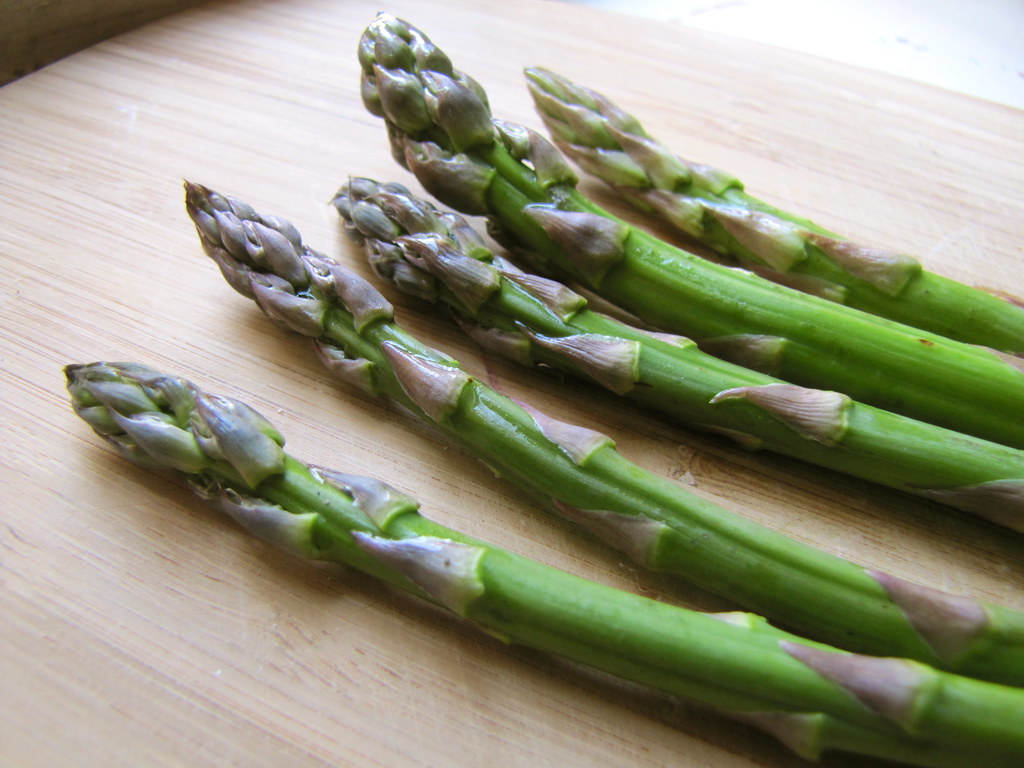 I considered roasting the asparagus at high heat until crisp and a little blackened, but a much quicker solution proved itself in my gas range. This is not to be attempted without a good pair of tongs and some carefulness, but it’s really no less dangerous than grilling on an outdoor hibachi come again. You simply coat the asparagus (once trimmed of tough ends) with a little olive oil and salt, and hold them over the flames, turning, for a few seconds. The direct flame will instantly char the sugars across the surface as well as cook them very lightly, as asparagus should be anyway. 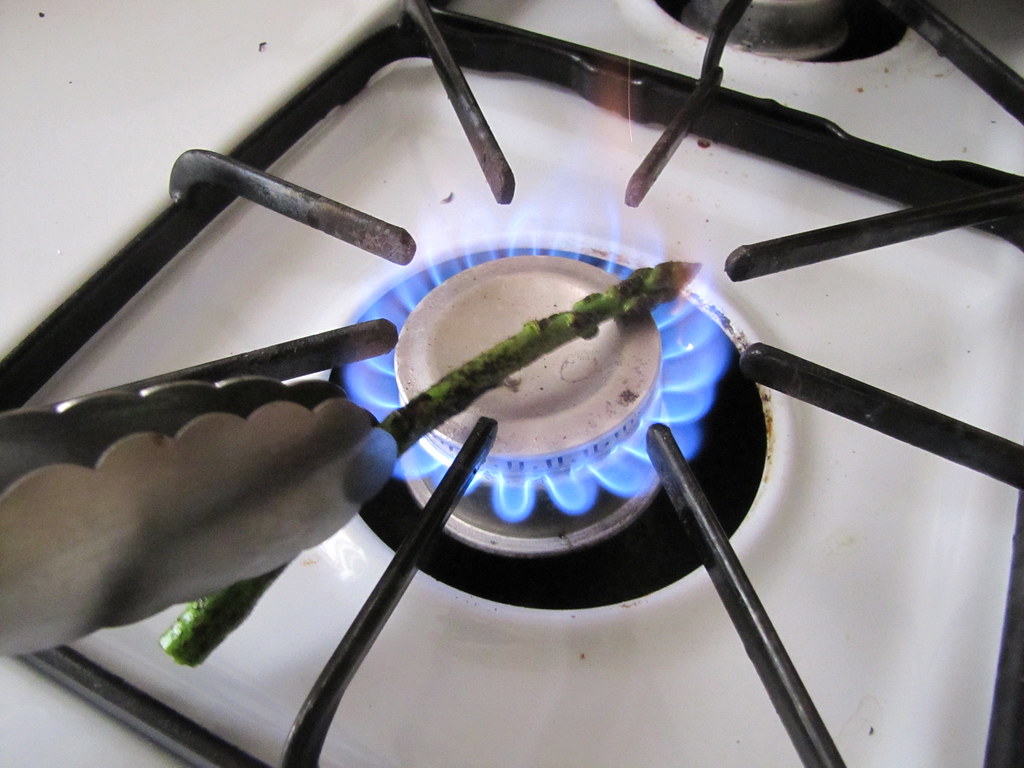 how to “grill” on the stove

The final assembly is now ready: place a dollop of the lentil puree on each plate, add a few asparagus stalks, and try to scatter it in a somewhat attractive way with some good, plain yogurt. An extra squeeze of lemon and some of its zest, along with pieces of mint leaves, and you’re all set. I scraped up every last smudge of lentils and yogurt on my plate. Hope you enjoy it just as much.

Heat about 2 tablespoons of the olive oil in a heavy-bottomed pot with a lid. Add the onions and garlic and cook over medium-low, stirring occasionally, until softened and translucent, about 8 minutes. Add the lentils and enough water (or stock) to cover by about 1/2″. Bring to a boil and reduce to a very low simmer. Cover and cook 10-15 minutes, checking to make sure that the water has not run dry and adding a bit more if so.

Transfer mixture to a blender or food processor and pulse a few seconds until smooth. Add salt and pepper to taste. Drizzle in about a tablespoon of olive oil while pulsing and a tablespoon of fresh lemon juice, or to taste.

Coat the asparagus thinly in olive oil and a sprinkle of salt and pepper. Grill just until blackened in spots across its surface evenly (either outdoors on an actual grill or by my method on the gas stovetop, with tongs). Set aside.

Divide the lentil mixture amongst serving dishes. Arrange the grilled asparagus on each one. Drizzle each with a tablespoon of yogurt. Squeeze with some extra lemon juice, and sprinkle some of the lemon’s zest and mint leaves on top of each. Serve immediately.

Three brownie points: This light side or snack covers so many food groups, it’s not a bad idea to have a larger portion for a whole meal. There’s healthy, plant-based protein, fiber and carbohydrates in the red lentils, Vitamin C and Vitamin K (and more protein) in the asparagus, calcium and active probiotics in the yogurt, and a bit more Vitamin C in the lemon. Plus, it’s really tasty!

Seven maple leaves: Another dynamite score thanks to the seasonal and local asparagus used, local, natural yogurt, and eco-friendly dried beans. Save for the seasonings of non-local lemon and olive oil, this is a highly efficient meal in many ways.