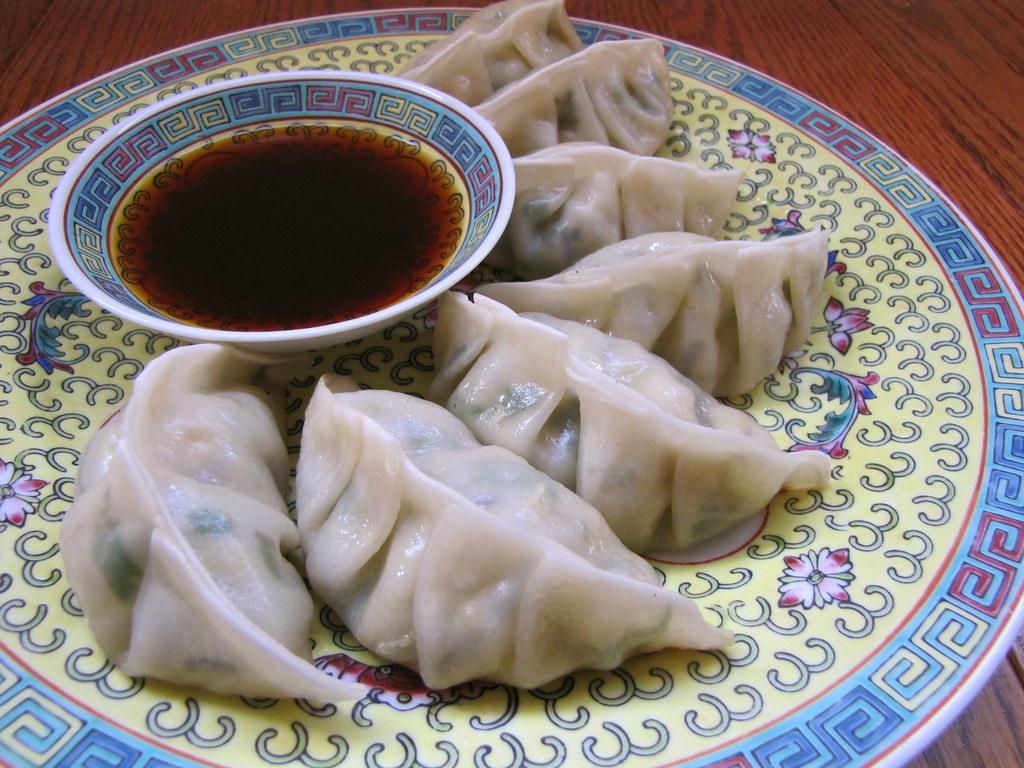 Vegetarian dumplings were once a strict equation to me: finely shredded cabbage, minced five-spice tofu, chopped scallions, and maybe some shiitake mushrooms, or clear strands of bean starch noodles. This simple formula I had been raised to identify as the proper filling for a meat-free (and admittedly inferior) version of the favorite comfort food. It wasn’t until more recent years that I realized this colorless, choppy mixture didn’t need to be just so… or just so inferior.


This is the most recent incarnation of what’s been years of tinkering with dumpling fillings both with and without meat. With meat, it’s much easier to play around; just make sure there’s a good ratio of fat to your meat, and mix away with any other ingredients or seasonings you want (i.e. “cheeseburger dumplings“). Vegetable-only dumplings have a few obstacles. You can’t have too many juices in your filling, and they’re going to be harder to fold since it doesn’t congeal. Also, you want to make them taste as savory as can be. 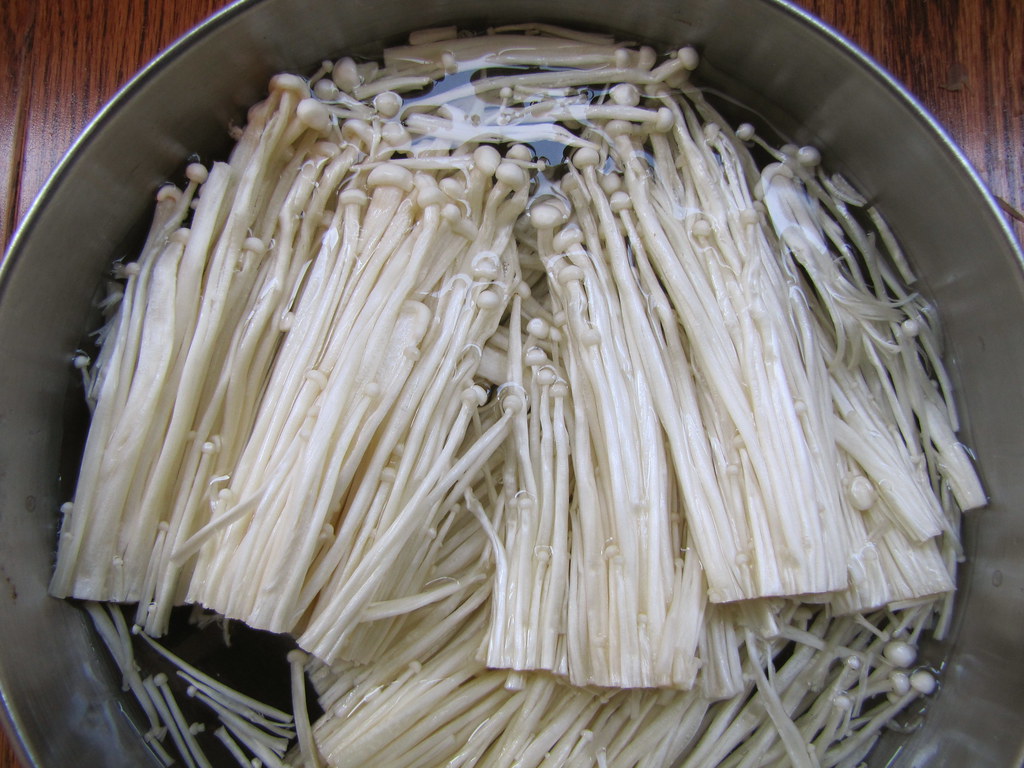 So I’ve combined two of the most savory plant-based items in these crispy, pan-fried potsticker-style dumplings: seaweed and mushrooms. To maintain a harmony of shape and texture, I used enoki mushrooms, and long strands of wakame seaweed that had been dried then soaked. I added a generous splash of sesame oil, and a little cornstarch to help bind the juices that would inevitably pool from the filling once it gets hot. 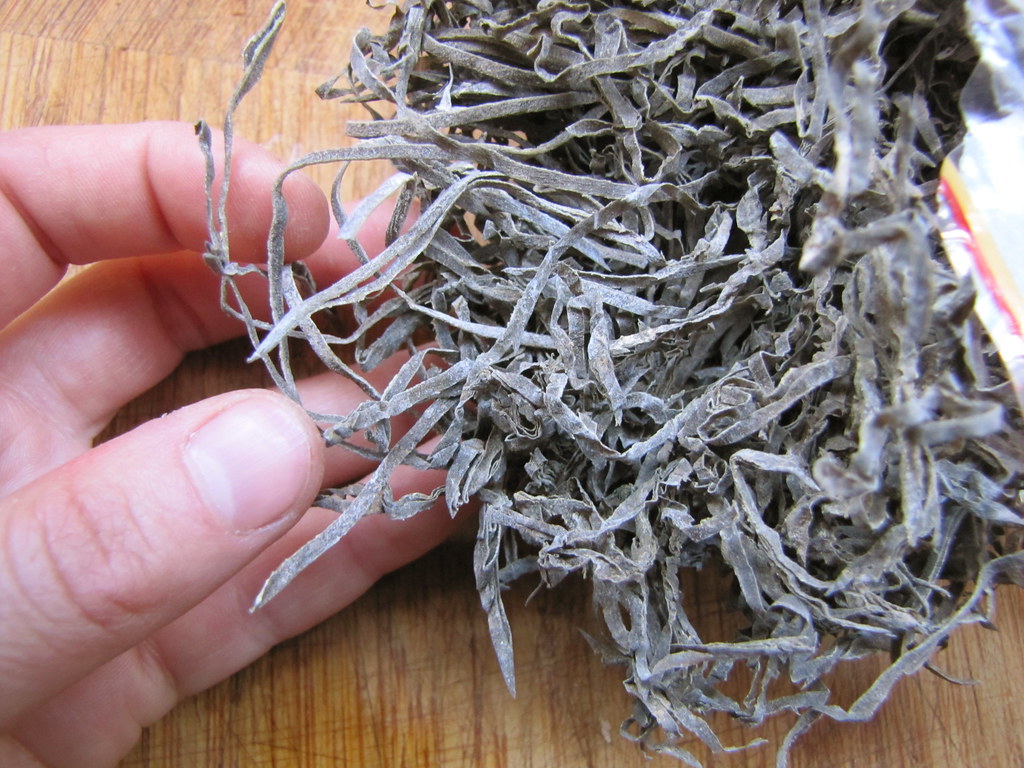 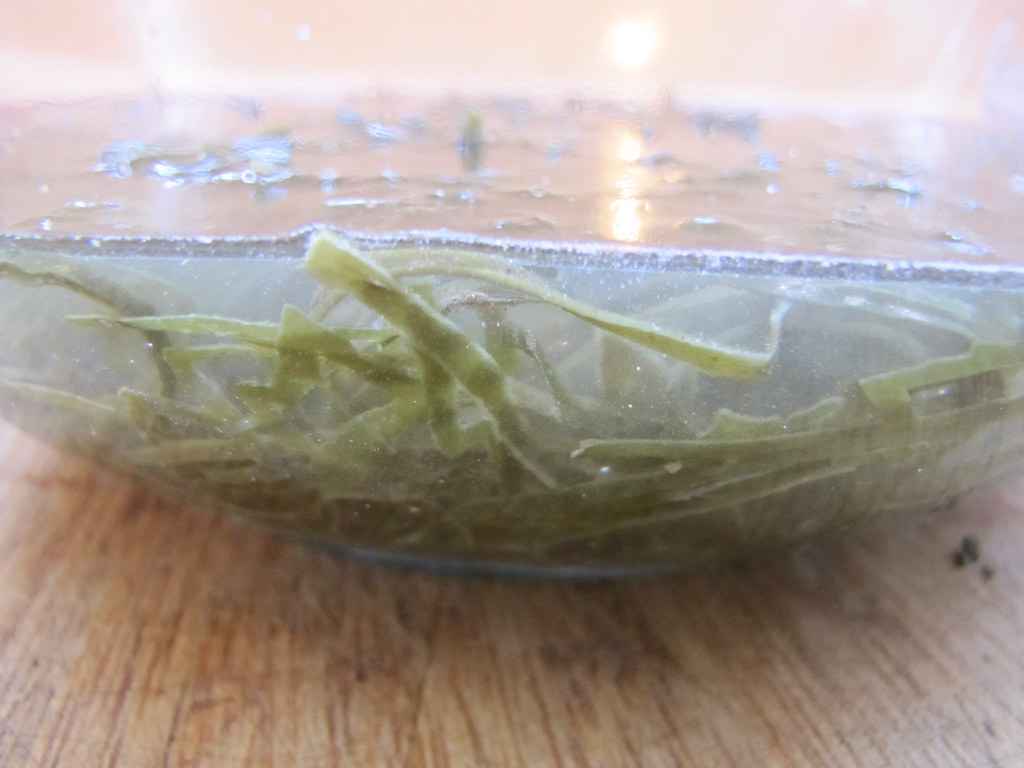 I’ve never heard of putting seaweed inside any type of dumplings before, but it didn’t taste half bad in the end. A little chopped fresh cilantro and plenty of scallions gave this filling a refreshing taste to contrast with the dank, seaweedy flavor, and some crushed red pepper flakes added a hint of smokiness and spice. I’ve added shredded carrots to vegetarian dumpling fillings before, and would recommend those here too as an option in the filling for some more color, if you like. 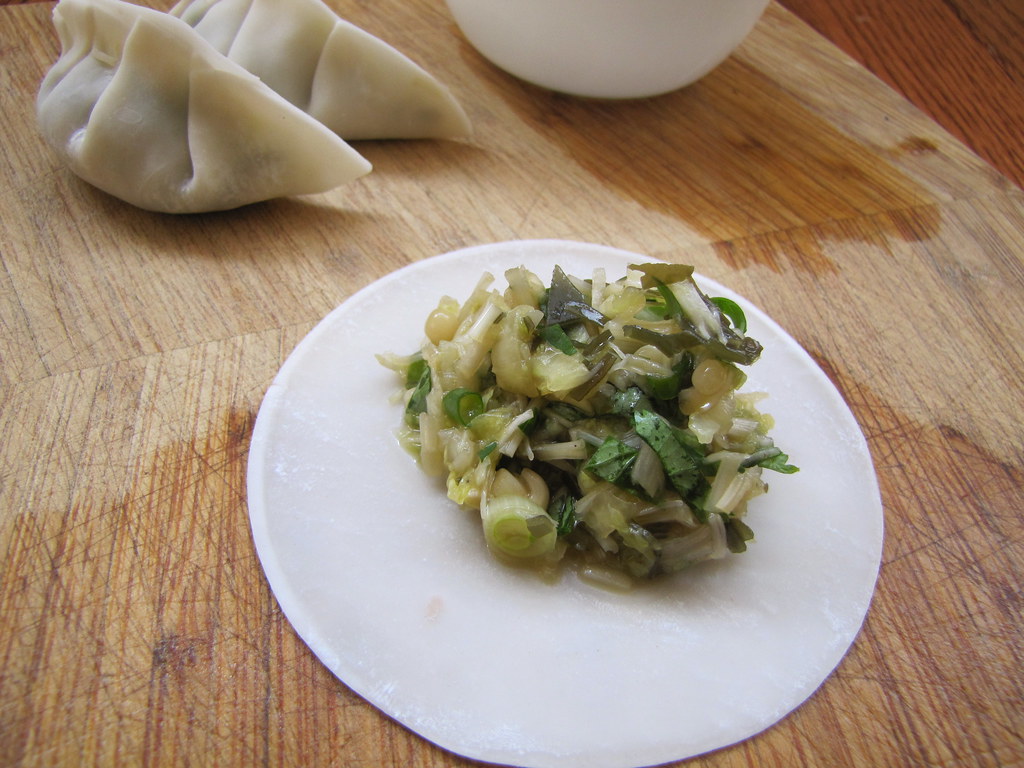 folding the filling into pre-made skins 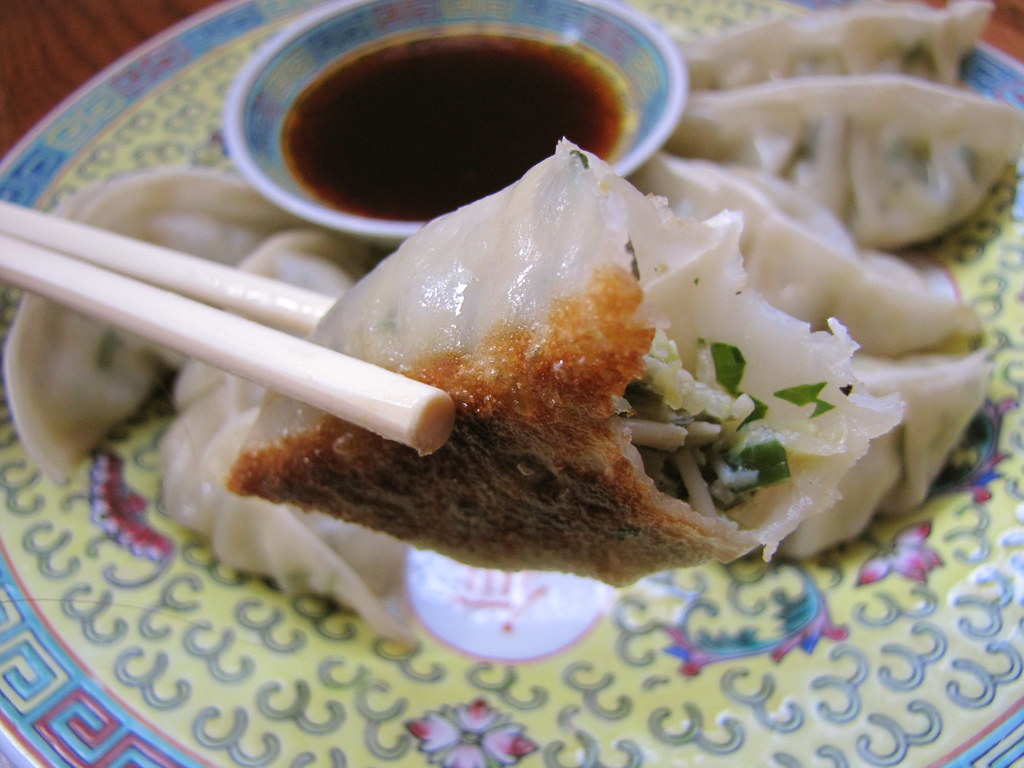 These dumplings were so unexpectedly savory that when my dad tried them, he insisted there was some type of seafood in them. It must have been the seaweed, or the woodsy funk of the mushrooms that led to this (incorrect) determination. I say it was a win for the all-vegetarian dumpling.

Chinese Potstickers with Seaweed and Mushrooms
(makes about 50)

note: for this recipe, I simply used a package of pre-made, round dumpling skins. To make your own (highly recommended, if you have the time), follow the recipe for the homemade dough in this post. If buying them, make sure you get white, round dumpling wrappers which should only list flour and water for ingredients.

Soak the seaweed in lukewarm water for about 10 minutes, until softened. Drain and pat dry well. Finely chop the seaweed and mushrooms. Be sure to fully dry the rest of the vegetables before chopping and squeeze out water from cabbage. Combine all the ingredients except for the wrappers in a bowl, and add generous pinches of salt and pepper. Can be covered and chilled for up to a day ahead.

Placing a round dumpling skin flat on your hand, drop a tablespoon of filling into its center. Dip your finger into a small bowl of water and trace the edge of the wrapper. Fold the wrapper in half and make a pinch at the top; next, bring a piece of the edge about half an inch to the right of the pinch over to the pinch. (This will cause the wrapper to fold diagonally on the right hand side of the dumpling.) Bring a piece of the edge half an inch to the left over to the pinch next. Pinch the pieces you brought to the center shut and continue to seal the edges to the left and right until the dumpling is fully sealed. From an aerial view, it should be shaped like a crescent.

Heat the oil in a large skillet that comes with a lid. Once the oil is hot, line the dumplings in a circle around the edge of the pan. Fill the center with as many dumplings as will fit – do not squash them against one another too much (you will probably need to cook in 2-3 batches, depending on the size of your pan). Let cook on high for about 2 minutes. Add enough water to the pan to cover about one quarter of the height of the dumplings, reduce heat to medium, and cover. Let cook covered for about 4 minutes, or until the wrappers are translucent and no longer white on the creases. Lift cover, and cook until all the water has evaporated. Remove the potstickers from the pan with a spatula (they will stick) and serve with soy sauce (or soy sauce mixed with vinegar) and/or chili sauce for dipping.

Three brownie points: Wow. For a crispy, salty snack, these have a lot more health benefits than burdens. There’s an abundance of greens inside them, like any good dumpling should have — scallions, cilantro, and some vitamin-rich cabbage. There’s also seaweed, which is great for everything from your immune system to your skin, and has omega-3 fatty acids as well. It comes with the cost of high sodium, so go easy on the soy sauce if you’re especially prone.

Five maple leaves: It would seem as if these dumplings are filled with exotica, shipped in from faraway lands and passed through so many hands. But the ingredients themselves are about as simple and natural as they come — dry seaweed stores and ships incredibly well, with virtually endless shelf life, and they’re as plentiful in the ocean as grass is on land. Mushrooms, cabbage, carrots are all low-impact goods and the dumpling skins should be easy to find made in the States, and once again, contain only flour and water.