I made unagi recently. And I didn’t produce the Japanese specialty by unwrapping a vacuum-packed fillet of fully prepared, barbecued eel — I went to a seafood market after having dim sum with friends in Chinatown, took home a sack of fresh eel, and prepared it from that. This was a huge step for me, because I love the taste of eel in sushi or with rice, but am terrified by the appearance of a fresh, uncooked eel.


This probably happened sometime in my childhood. My family would take week-long summer vacations on the Delaware shore, where we caught blue crabs and small bay fish to cook for dinner each night. One night, my father decided to attempt to cook the eels he had inadvertently caught in his traps. I  have nightmares to this day of flapping, bloody logs of slimy, black-skinned flesh, still flapping several seconds after they had been severed from the adjacent piece. I also recall wading in knee-deep water and feeling an eel slither against one ankle, and screaming in such a manner that it could be heard all the way in the other rental houses across the bay.

So back to the fish market in Chinatown with my friends: I had a slight anxiety attack once we located the eels on the bed of ice. They were greyish-black, slimy, and exceedingly large — not quite as scary as I had remembered them without all the blood but still pretty weird. But I wanted to make unagi, and thought it would taste so much better freshly made. I was also on a mission to convince my favorite local fishmonger, Blue Moon Fish, to carry eel, because they were so plentiful in the waters but were thought to be unsalable. So I managed to talk the Chinatown fishmonger into choosing the smallest eel in the ice. He picked up the fish like a long, floppy salami, slapped it onto the cleaning table and proceeded to gut it using scissors, his gloved hands, and a hose.

I took it home. The smell, once I opened the plastic bag, was indescribable. It wasn’t a rotten, sulfuric smell, but a weirdly metallic one, and I had researched enough to find that fresh eel naturally has an off-scent that must be tamed with careful preparation. I got discouraged: neither Elizabeth Andoh (Washoku: Recipes from the Japanese Home Kitchen) nor Shizuo Tsuji (Japanese Cooking: A Simple Art) could help me in the fresh eel-preparation department. I scoured the Internet. I texted friends. I summoned my memory of eating fresh eel prepared numerous ways in Taiwan — they were selling it at the store, so there must be some way to prepare it, right? In the end, I came away with a satisfyingly fresh-tasting unagi by filleting the eel logs, grilling them, steaming them, marinating them in a sweet-soy glaze, and grilling them again. And every step of the way the eel got better — less scary, more familiar, even fun. 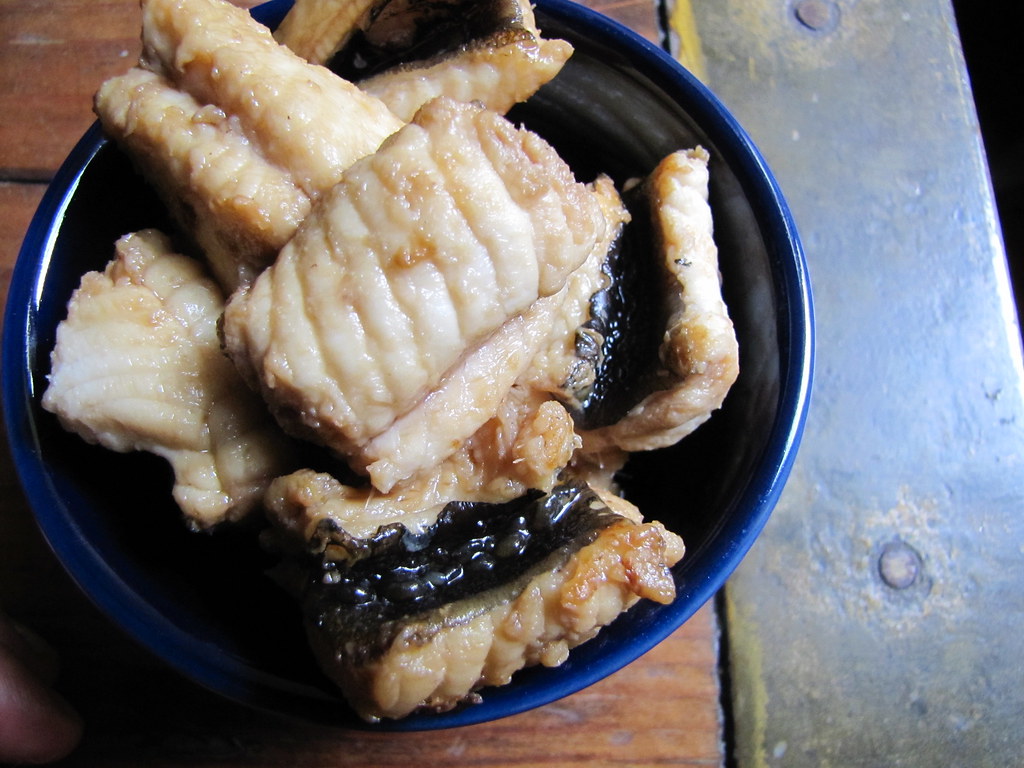 eel on its way to becoming unagi

This was all done in about two hours, but over the course of this time I conquered something that had plagued me for about two decades: my fear of eel. This isn’t a task that I’ll be faced with every day, but it’s one that I imagine will now pop up in due time, and that I’ll remember every time I enjoy an unagi sushi at a restaurant. The results were good when I made it, and when done by professional sushi chefs, they’re good as well. The only difference is that I’m not a stranger to the somewhat uglier, more grueling side of what I eat, and I’ll appreciate it all the more.

I’ll tell you what: I’m no sissy in the kitchen after many of these conquerings, either. But that only heightens my enjoyment of the dish in question. I was once designated lobster killer in a Hapa Kitchen dinner, when no one else had the stomach to slit live lobsters’ heads in half before cooking them. I got over this fear simply because I had done it before — in fact, had talked about doing so in my book, as well as roasting a whole turkey (the not-so-fun — at the time — task I was thrown one Thanksgiving). By doing just one of these things, just once, I was able to open up to a whole new level of appreciation for turkey, lobster, or eel. I think it can be done with just about anything.

It’s much better to be on the side of the lobster killer, or the unagi maker, when you’re sitting down to dine. Seeing the unsightly necessities of eating eel is a visceral experience that may change your perception of the dish for good. And then you realize that any creature that gives its life so that you can eat is beautiful — and if you ate it, then it’s a part of you now, too. And being afraid of your own human self would just be silly, now wouldn’t it?