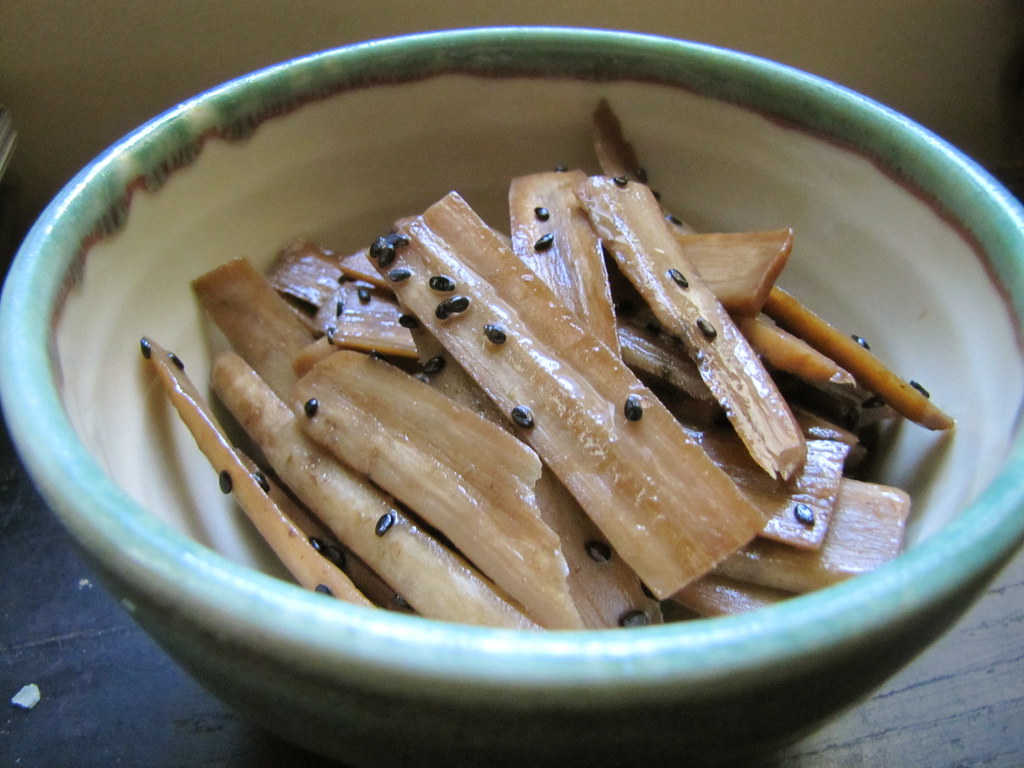 Winter is a time to get back to your roots. I’m not talking about taking up knitting or studying Yiddish or something else important and having to do with your heritage. I’m talking about root vegetables. They’re abundant — probably the only produce that’s abundant — when the ground is frozen, and they’re widely adaptable to many cooking techniques. They also claim a wide range of flavors, from spicy (horseradish) to sweet (parsnip), bitter (turnip), zesty (ginger), fresh (celeriac) and earthy (beet). One root you might have not tried, but certainly should this winter, is burdock — also known as gobo in Japan, where it is savored in this easy and pleasing snack-like dish.


Or maybe I am talking about “getting back to your roots,” because according to macrobiotic dieting, eating roots is associated with feeling more grounded, or rooted. And you just might be inspired to talk to Grandma from doing so.

It’s funny because my own Grandma and Grandpa on my mother’s side probably didn’t eat burdock root cooked as a delicacy like in this dish, but they most likely encountered the plant as a component of traditional Chinese medicine. You see, burdock has many uses, too — its woody and fibrous root can be eaten when cooked, much like a potato. But the plant has leaves and seeds and woolly burs, from which the seeds are extracted, and all are edible or medicinal in their own ways.

What a range of topics to dispel when at first I had only wanted to cook with some unfamiliar burdock root! If you’re new to cooking with it, like I am, then this recipe is surely the ticket. 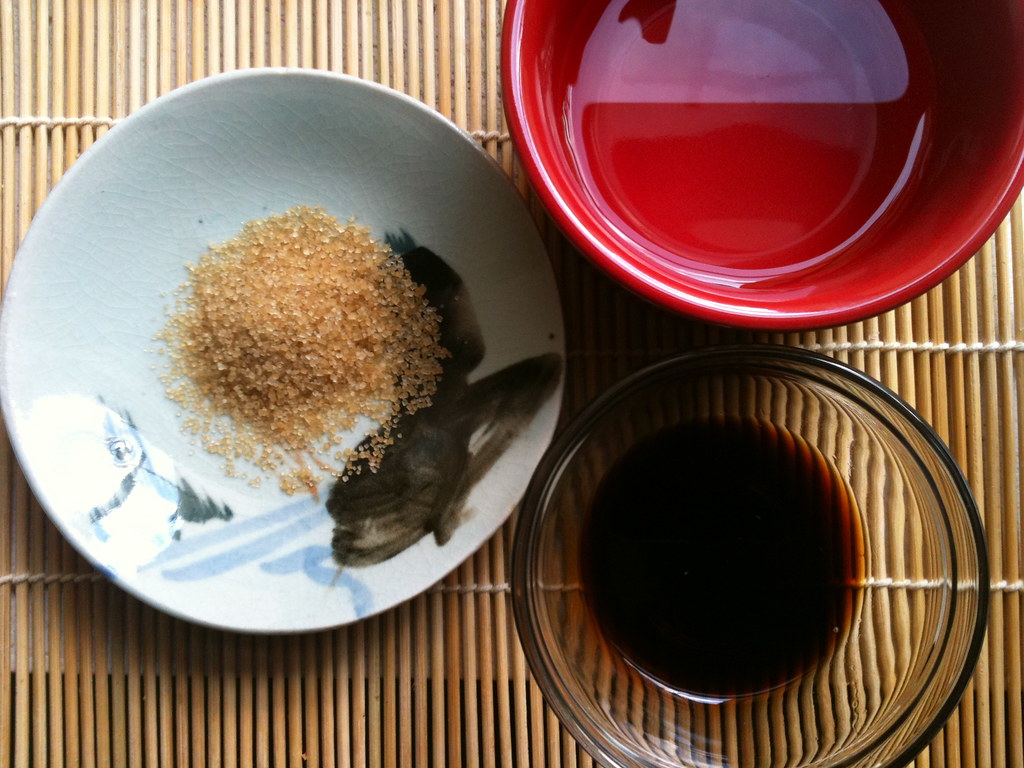 You just need three things: soy sauce, sugar, and some rice wine. Simmer that root until it’s tender in this mixture, and it’s good to chill or eat right away. I don’t care if you cut it into fine matchsticks, or add some carrots to them for color. I’ve seen them sliced in wide slivers at Japanese restaurants and grocery stores (Sun Market!) like this, too, so I’m obliged to take the easiest route and do that. I did sprinkle them with some sesame seeds for serving, though, because they’re attractive (although the black sesame seeds that I had on hand may be less so).

The honest truth is that burdock root doesn’t really need much seasoning nor garnish to taste fantastic after you cook them for a bit. They have a naturally sweet, woody flavor that you can smell after five minutes of simmering it, and its tough texture when raw succumbs to a crisp elegance when simmered. They remind me a bit of sliced bamboo shoots that always came in jars or cans from Asian markets and went into stir-fries when I was growing up — only unlike bamboo, burdock is a hardy root vegetable that’s vastly adaptable to many climates and grows (as weeds even, in our own backyard) readily in the Northeast. If you don’t believe me, and you’re in New York City, just sign up for a spring foraging tour with Wildman Steve Brill and he’ll likely show you a burdock plant in some stage of its life in any city park. 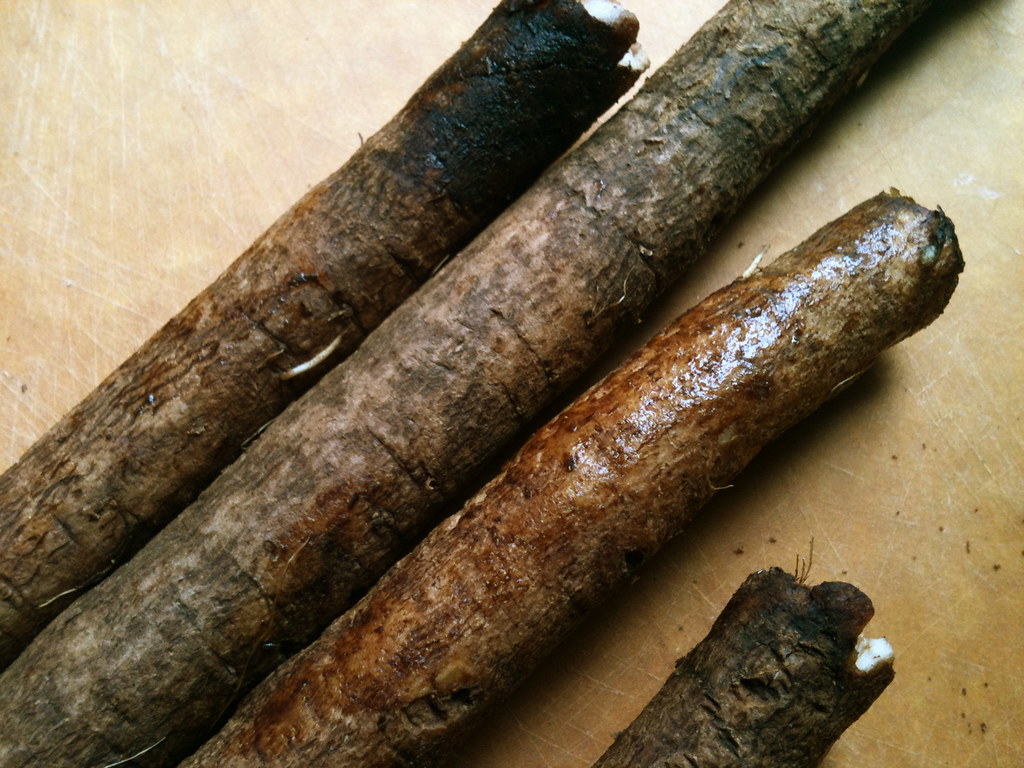 So if you once thought burdock a little exotic, pick it up next time you’re at the Greenmarket, where many farmers, I’ve noticed, have been offering it over the years. Especially in the winter, when it can be a little harder to find something more “exotic” or interesting abound.

Heat the oil in a small pot and add the burdock slices once hot. Crisp the slices for 2-3 minutes, until fragrant. Remove from oil.

Clean the pot or transfer the burdock to a small, clean pot with just enough water to cover, about 2 cups. Add the soy sauce, rice wine and sugar, and simmer for about 10 minutes, or until root is tender. Drain from liquid and chill before serving (optional). Garnish with sesame seeds for serving.

Three brownie points: Burdock root is a great source of potassium and iron, and has some amounts of calcium, Vitamin C, and Vitamin E. It’s also known as a natural diuretic, cholesterol-fighter, and blood purifier. All told, it comes with very few calories and low sodium.

Four maple leaves: While I have seen and known various different local farms to offer burdock root in the winter (such as Evolutionary Organics, which was hit hard by Hurricane Irene this season), I actually got mine while making a weekly run to the Japanese market in the East Village, along with some soba noodles and such. My plant was grown and shipped from Taiwan, whose hot climates sound somewhat unlikely for gobo. As it turns out, this root can grow so many places, along with Taiwan it grows hardily in Brooklyn’s own Prospect Park, which I learned in a tale recounted in The Art of Eating in. So go forage for it if you’re so brave; otherwise, be on the lookout anywhere.