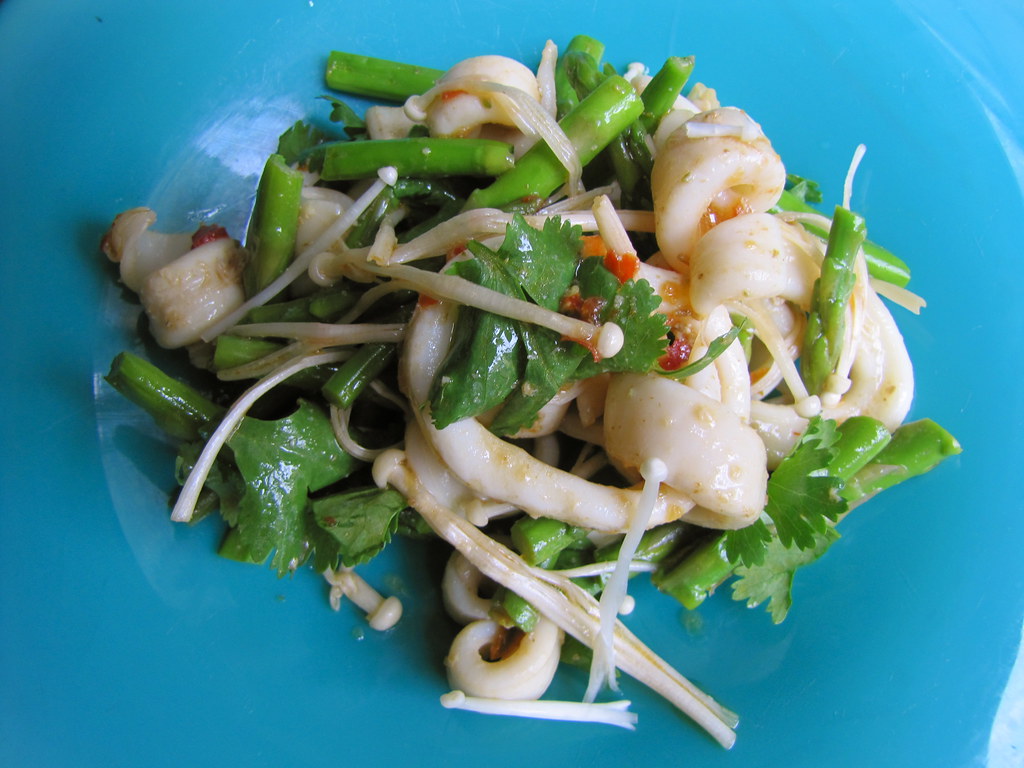 This salad is so yummy it makes me want to throw up… so I can fill my belly with it again. Sorry for that unappetizing intro, but it really is something of a new phenomenon. All these weeks of waiting for spring asparagus have paid off handsomely. Not only are the asparagus crisp and slender, but it provided plenty of time to ruminate on how to make them shine.


This salad was served as a first course for my first collaboration dinner at Milk Bar this past Wednesday night. The small but varied number of ingredients that give it such dynamic flavor might seem like the result of a bored chef with too many scattered Asian condiments in the cabinet. The dressing is comprised of sesame oil, ponzu (a Japanese citrus-seasoned soy sauce), Vietnamese chili-garlic sauce also known as sambal olek, and fresh lime juice. It’s a little all over the map. Also, the squid is seasoned with ground cumin as well as salt and pepper. The extra tidbits include cilantro leaves and enoki mushrooms, tossed in fresh. 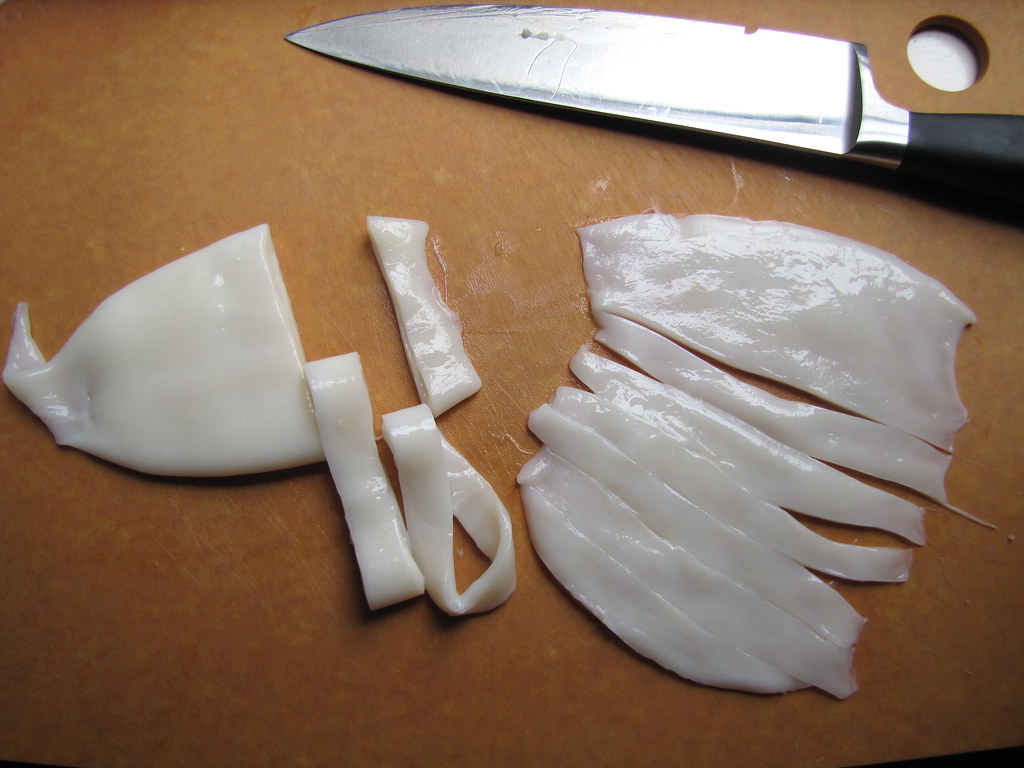 some squid is sliced into rings, while others, strips 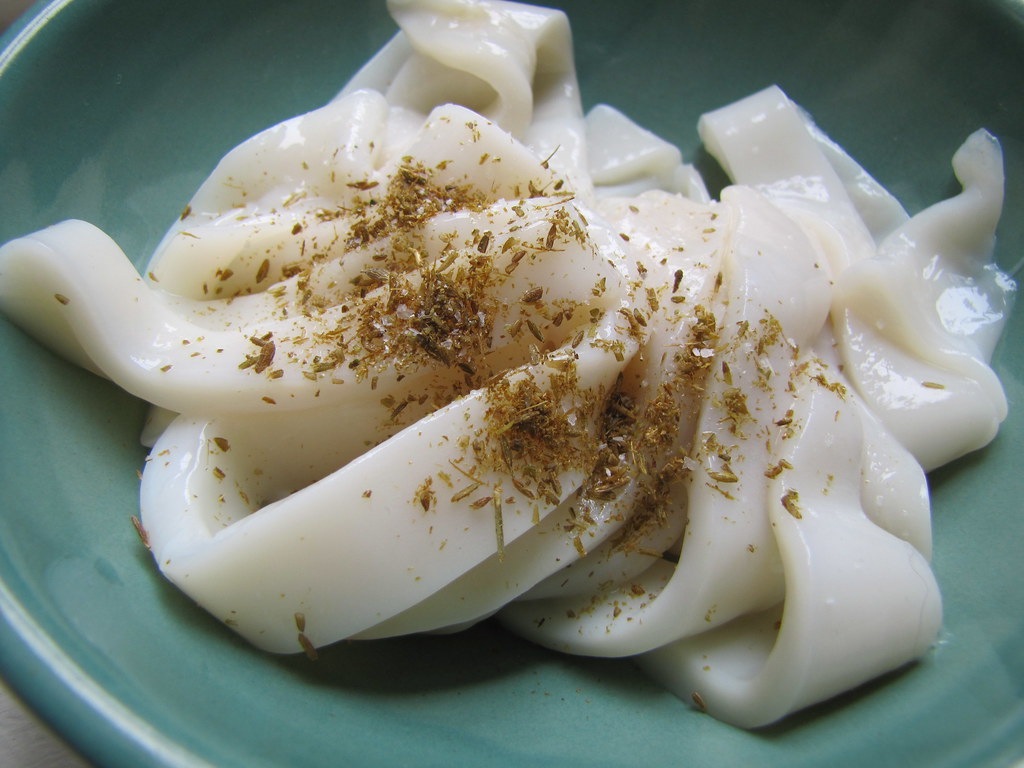 seasoned with a pinch of cumin and salt

When it came to chopping the cleaned squid, two styles were employed: in addition to just slicing the cylindrical tubes of shellfish — like with fried calamari — about half the squid bodies were slit lengthwise to slice into lengthwise strips. Once these pieces touch a hot pan, strikingly different things happen for each: the rings plump up into fat, tender rings, while the strips curl up into curlicues. Hence, the finished dish will have a mixture of textures and shapes, which includes the even curlier, crisped-up tentacles. 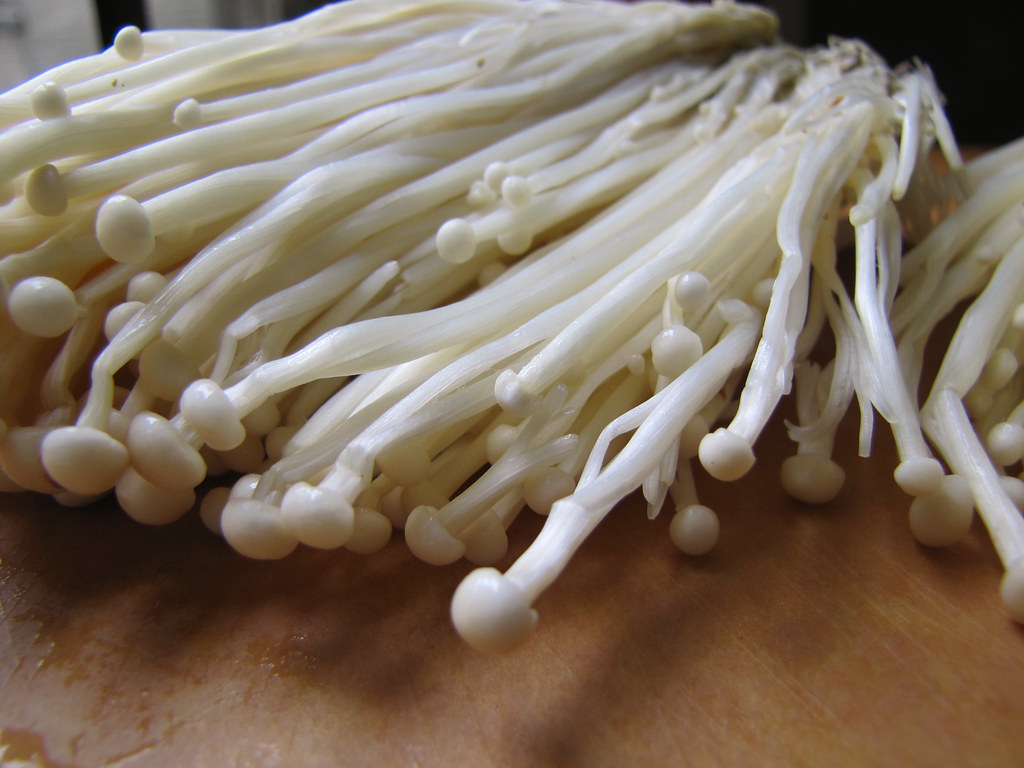 I can’t take the credit for the idea of adding enoki mushrooms, nor can I remember who came up with much of everything else in this dish. But I do remember negotiating about whether or not we should blanch the enoki mushrooms (like the asparagus) or throw them in the salad fresh. These tiny straws of woodsy mushroom flavor are almost like sprouts: they’re watery and crisp. But, I had never encountered them in a prepared dish served raw. Co-chef Josh Kaplan and I wondered about this for a second and took a bite of a raw enoki mushroom each. It was going to be served raw, executive decisions were immediately agreed.

This three-course dinner came about rather by chance; I was playing pool with Karol, Matt and Maia one day in Williamsburg when I was approached by a stranger about starting a pop-up restaurant at a cafe called Milk Bar. Fast-forward to a few weeks later, and Matt and several friends of mine were dining at tables at the small, 25-person cafe on Vanderbilt Ave. in Brooklyn, Milk Bar. Another large table held a number of friends of Josh (the stranger at the pool table), the chef at the cafe.

Stranger things have happened in Brooklyn, but this has got to be another cool one. 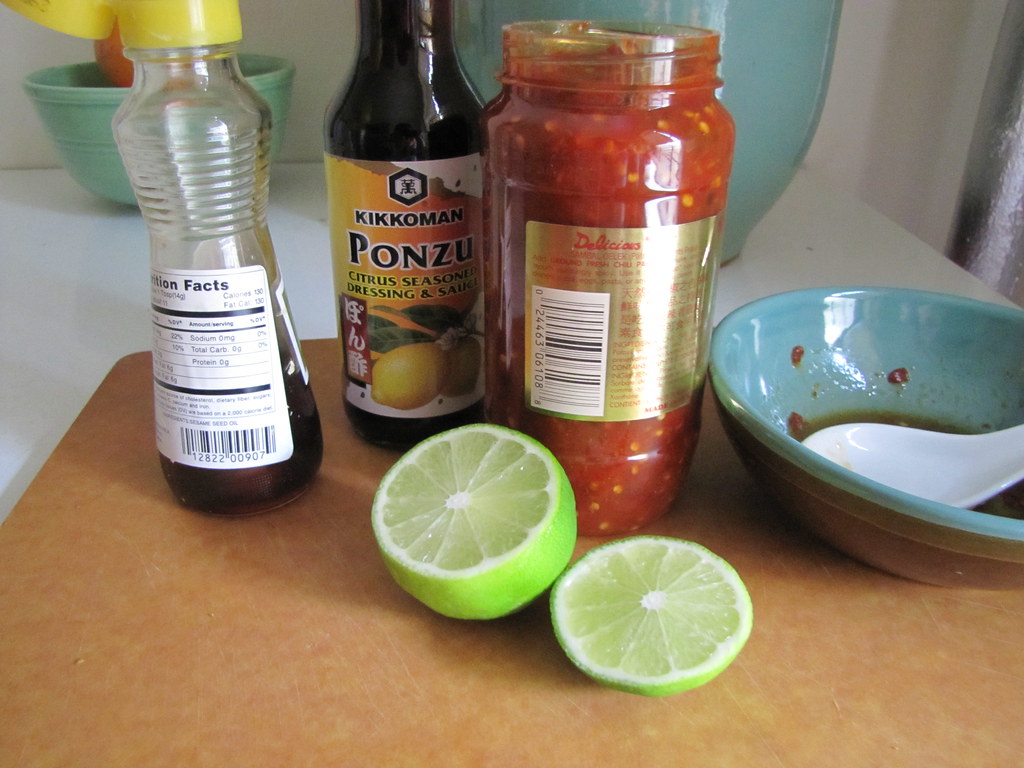 This salad course was one of the most-loved among both of our friends, and I simply love it too much not to spread the recipe around. Hope you love it as much as we all did. And if you can’t find asparagus yet — try it out with blanched, peeled broccoli stems, as I did the next day with some leftovers.

Heat a pot of water and prepare an ice bath. Cut trimmed asparagus into 1-2″ logs. Blanch for 1 minute and transfer immediately to ice bath to cool and preserve color. Once cold, drain.

Mix the raw squid with the salt, pepper and cumin in a small bowl. Heat the vegetable or canola oil in a fry pan and once it’s very hot, add the squid. Stir-fry until just opaque rather than milky-clear, about 1 minute or under. Transfer to a clean bowl. In another small bowl, combine the ponzu, lime juice and chili-garlic salt and adjust any ingredients to taste. Toss both the drained asparagus and squid in the dressing and toss in the cilantro leaves and enoki mushrooms towards the end. Serve immediately at room temperature or chill combined first if desired.

Four brownie points: A pretty good way to start off a meal. Crunchy, quickly blanched asparagus are delicate in flavor, but intensely nutritious, with a wide range of vitamins and minerals that include calcium, magnesium, selenium, Vitamin B6 and Vitamin K. Squid is an inexpensive and plentiful seafood with omega-3 fatty acids and protein — but, as with most shellfish, a high concentration of cholesterol. So eat in moderation, as in this dish, with heart-healthy vegetables in equal or more proportion.

Seven brownie points: Hm, many of the condiments used in this salad’s dressing took a long trip to get to the plate, including the out-of-season cilantro. But its main ingredients — squid and asparagus — were locally sourced. I’ve yet to find asparagus at the Greenmarkets, but bunches are trickling in fresh from Jersey farms at larger groceries, like Fairway, where I got these stalks. But most maple leaves here go to using freshly-caught Long Island squid. Check out my recent chat with the co-owner of Blue Moon Fish, where I sourced these specimens from, on how squid are low-impact seafood with healthy stocks in this region.