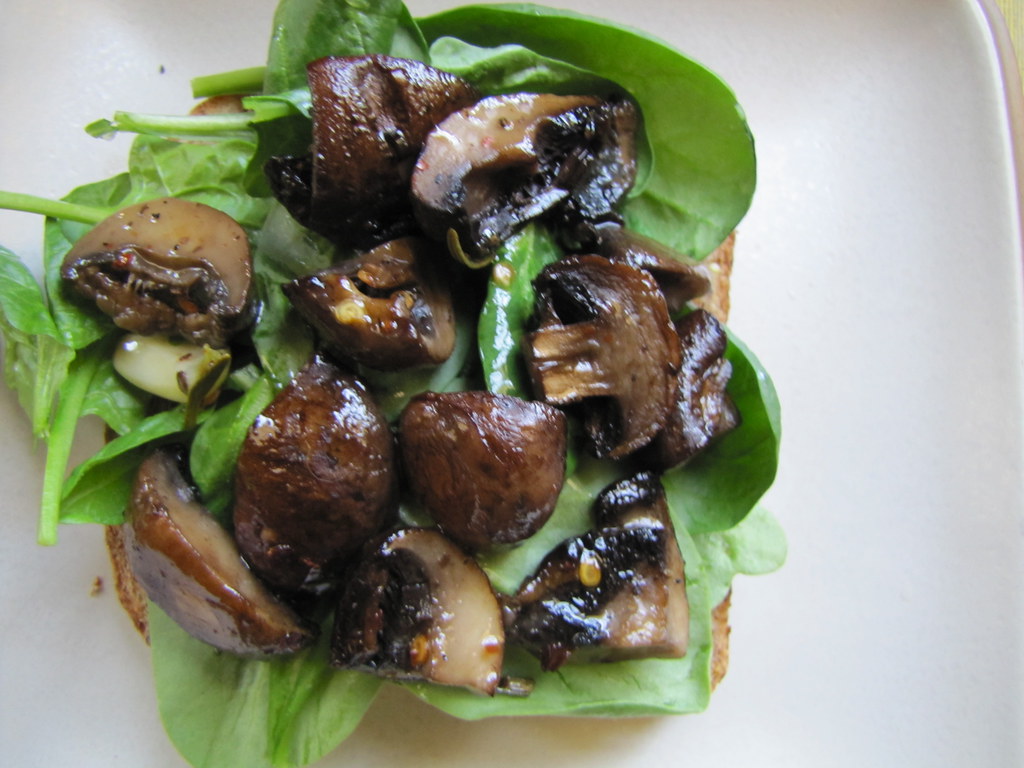 The question is not what can you do with these tasty morsels but what can’t you do with them. I have yet to find an unfavorable use. Tossed in fresh salads, pressed into paninis, folded in a taco, stuffed inside a fish (? sure!), they’re the sort of thing that makes leftovers something to look forward to, because you can incorporate these in some fashion.


I’ve spent a lifetime of sauteeing mushrooms, and not finding much reason to cook them another way. Sauteeing is great — it releases the viscous, gray juices of mushrooms and hopefully bleeds into something else in the pan. But roasted, they become almost chewy, almost crispy on the surface with a golden-brown crust on the tops. If you roast them for a short enough time at a high enough temperature, the mushroom will be still bursting with juice inside, but concentrated in taste and browned on the outside. It’s interesting. And it’s how the recipe for this is written below. 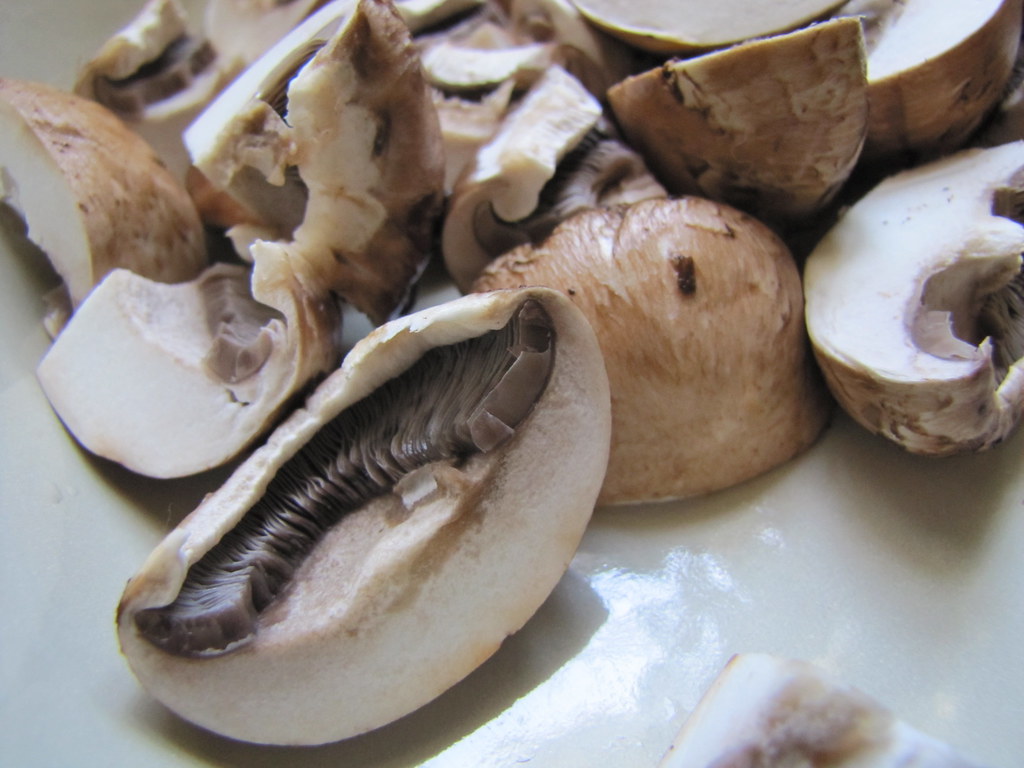 My first few times of roasting mushrooms happened by accident: they were on a pizza that went into a searingly-hot oven; they were on top of a casserole that went under a broiler. Finally, my dim lights turned onto the fact that they were quite tasty this way, and I could make it happen on purpose. 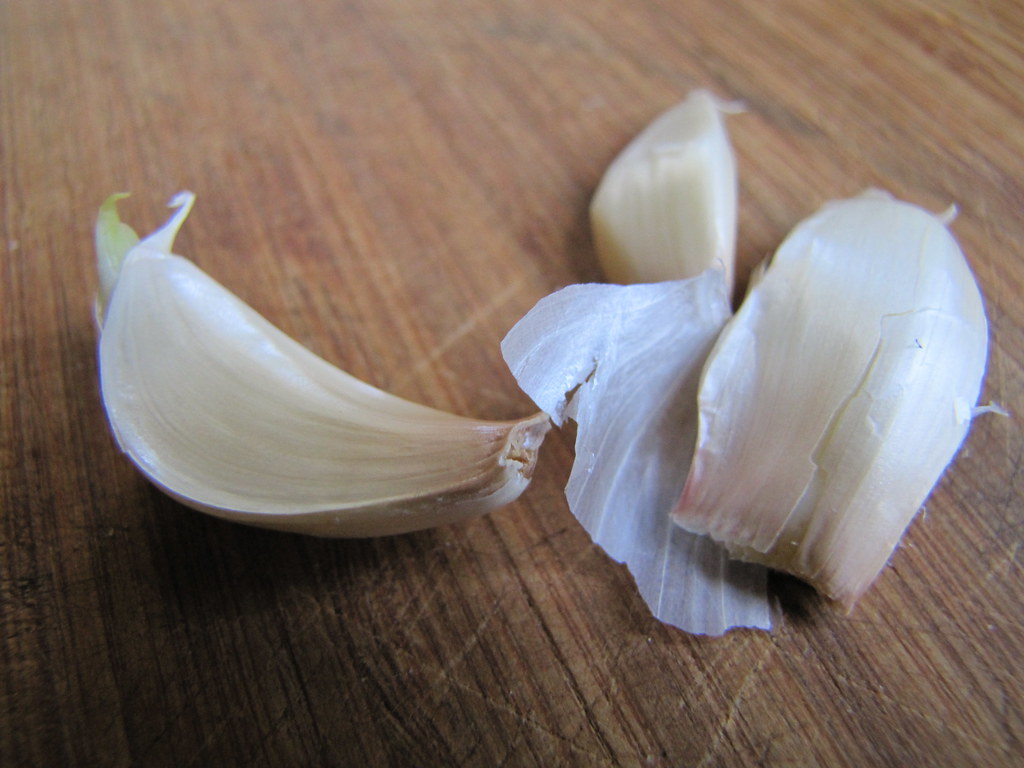 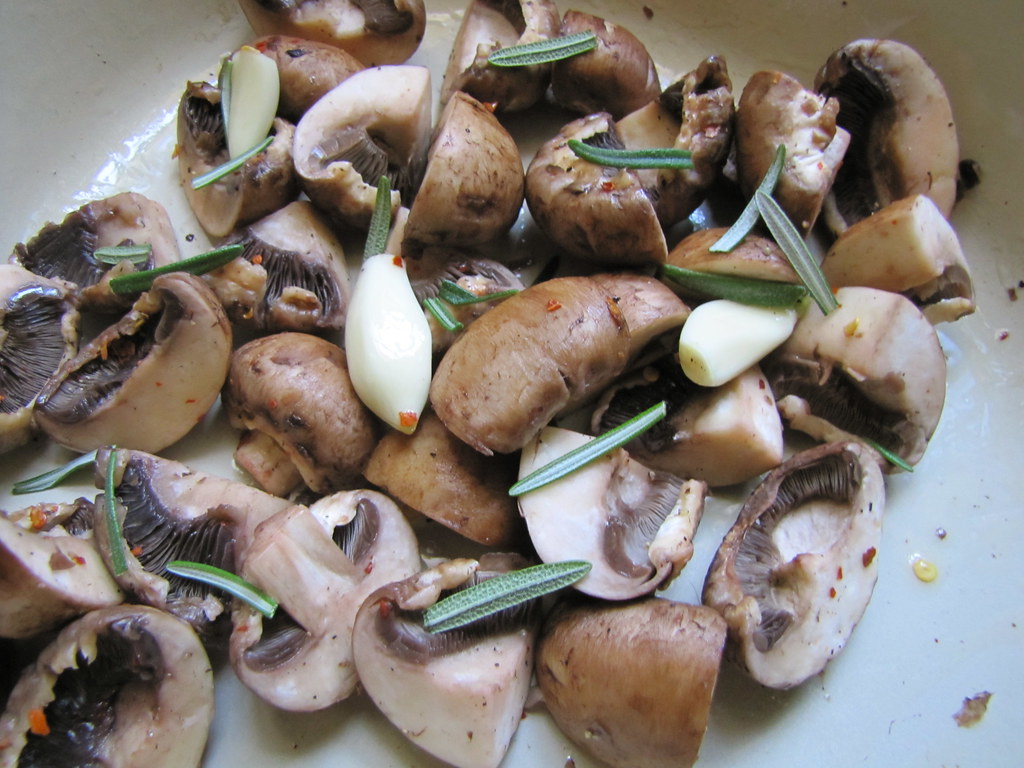 I wanted to give them enough flavor to soak up as they shriveled in so much heat, so I tossed them first with whole (small) garlic cloves, comparable in size with the quartered mushroom pieces, and of course, salt, pepper and plenty of olive oil. This seemed like a good opportunity to break out the red chili flakes, to seal in some southern Italian flavor, and since my rosemary plant is aiming for the sky right now, some spindles from that to trim it down. 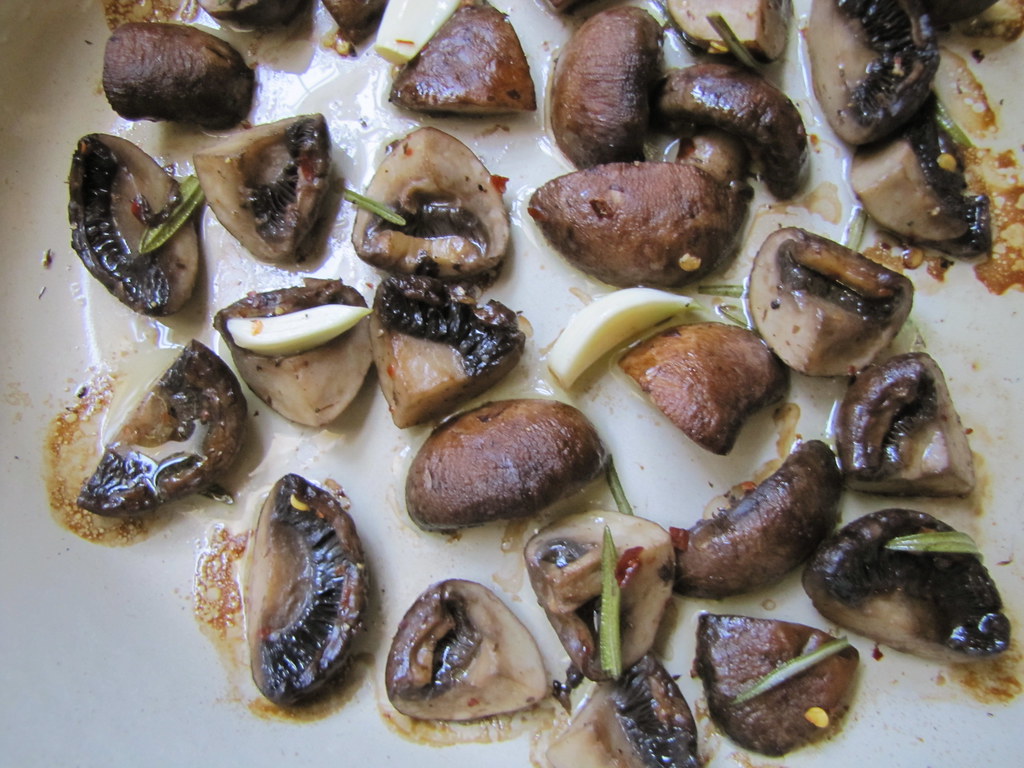 after a 425-degree roast

I used crimini mushrooms, which are also known as — and are — baby portobellos. I don’t imagine any other mushroom wouldn’t taste great as well, when cut down to a similar, substantial size. They could even be left whole. But quartering them seems to lend the finished product to more uses in the end. I’ve found many of these, but perhaps you could add more suggestions, in comments.

My latest, favorite creation was a lazy lunch with these mushrooms piled high on fresh spinach leaves and toast. I thought it could use a pool of bechamel sauce, perhaps, or a poached or easy-over egg on top. But because I was very hungry, I decided to turn that toast into a sandwich by adding another slice of bread, and gluing it all together with melted slices of Gouda cheese. It was fantastic. 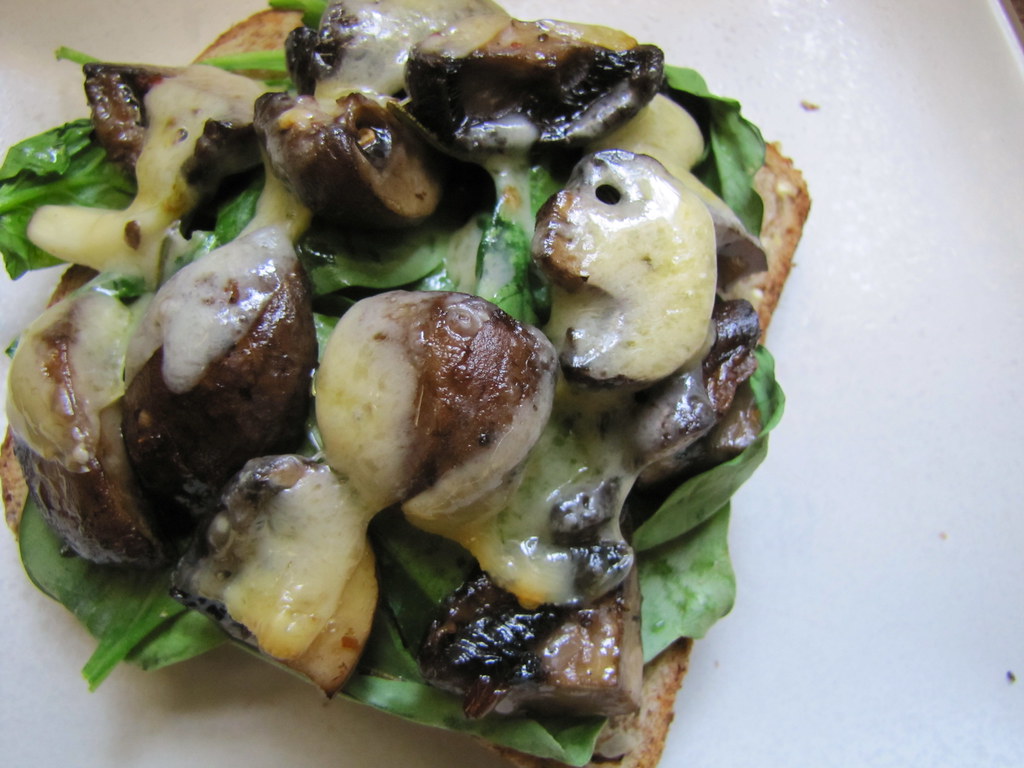 Roasted Mushrooms with Garlic, Chile and Rosemary
(makes about 1 pint)

Preheat oven to 425 degrees. Toss mushrooms in remaining ingredients. Spread in a single layer on a roasting pan. Roast for 6-8 minutes, or until just browned and crisp-looking on top. Let cool and serve.

Cost Calculator
(for 1 pint or so)

Four brownie points: Mushrooms can absorb a whole lot of oil, so be mindful as you toss them and wonder why they don’t feel slick anymore after a few seconds. It’s all in there, still. But you definitely want to give them a nice coating to prevent them from getting dry or burned. Mushrooms might not have the same nutritional impact of many families of plants, but they’re a valuable part of one’s diet for what they do contribute. Selenium, for one, B-vitamins and phytonutrients to help out your immune system. Then, we rarely think of garlic for much else but flavor, but it’s a powerful allium with many benefits of its own.

Eight brownie points: Mushrooms are fungi that grow at pretty much any time of the season, unlike pickier plants. Several types are usually available Greenmarket stands such as that of Madura Mushroom Farms. But the biggest green factor benefit, and arguably health factor one, too, is the fact that these mushrooms can serve as a pretty satisfactory substitute for meat.