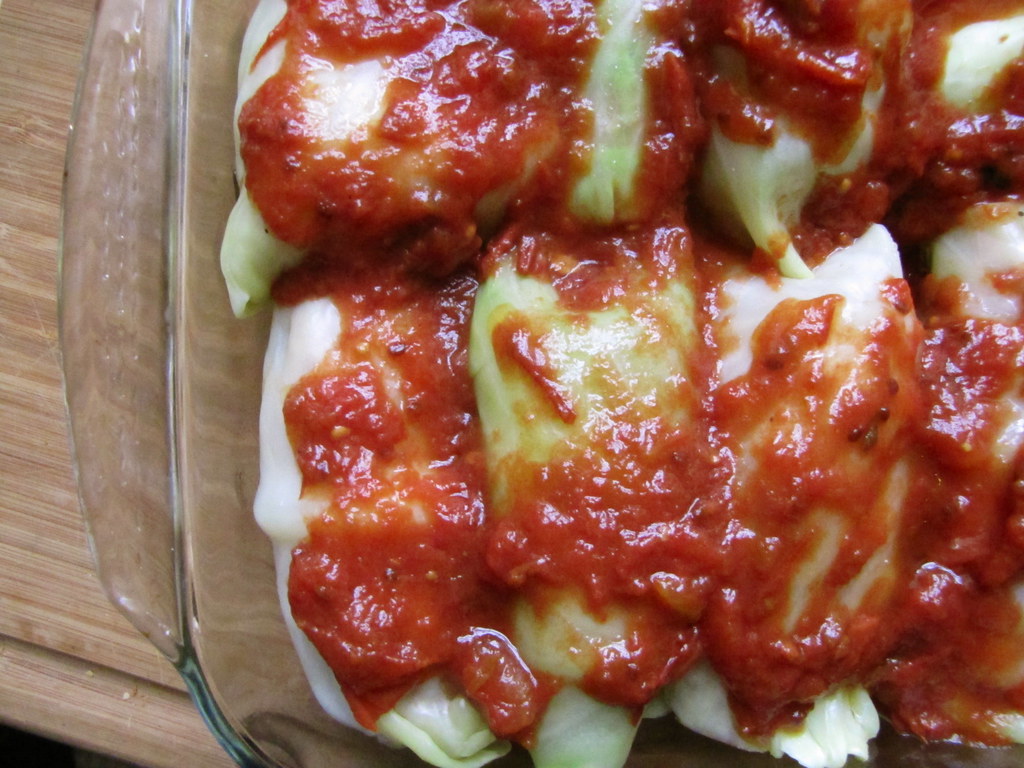 This dish is simply addictive. To make. Since giving it a vegetarian spin with mushrooms and breadcrumbs a few years ago, I’ve put all sorts of things in stuffed cabbage: spicy chorizo, roast chicken, rice and beans, and mixtures that might form a veggie patty if fried. I can see why rolling things up in large leaves has struck people from all parts of the globe as ideal: it’s a great treatment for any leftover food.


But for this latest version, I decided to stay fairly true to the dish’s Eastern European roots. I brought it to a triple birthday party for three friends, whose birthdays were all around Christmas, when nobody was in town. So to make up for it, they joined forces to throw the birthday party to end all birthday parties. And they gave it, for no reason in particular, a Russian food theme. So while many trekked to Brighton Beach in search of pickles and smoked fish, and others picked out liters of vodka and juice, I was making this stuffed cabbage. Any excuse to do it is good enough for me. 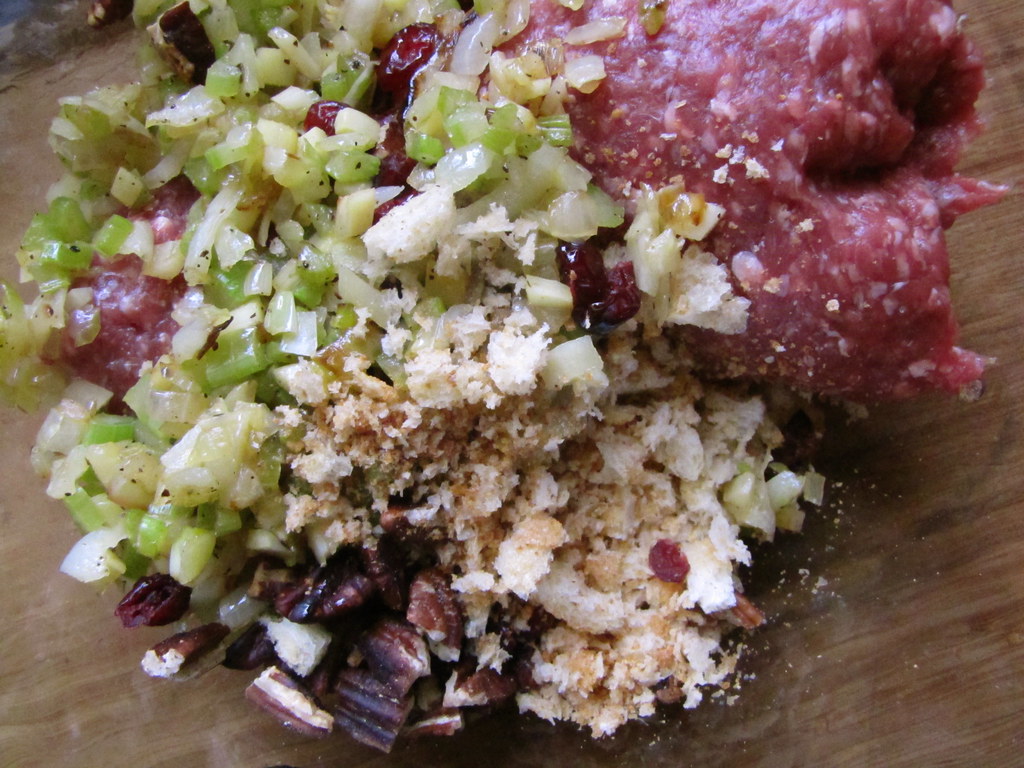 I started out with ground beef — just beef — since this seemed most classic to Russian tradition. That itself was a nice excuse to stop by Arcadian Pastures’ stand at the Grand Army Greenmarket, and chat with farmer Laurent. There I settled on one freshly ground pound of his grass-fed ground beef, which was surprisingly not frozen. Back at home, I surveyed the crisper drawer and diced up an onion, stalk of celery, and a small parsnip (in lieu of a carrot — use either one you like). These were sauteed until soft and translucent, and cooled first before adding to the meat. To make the mixture lighter and fluffier — as well as to stretch the meat — I soaked some fresh breadcrumbs from a sesame baguette in a beaten egg and a tiny splash of milk, to make it wet. 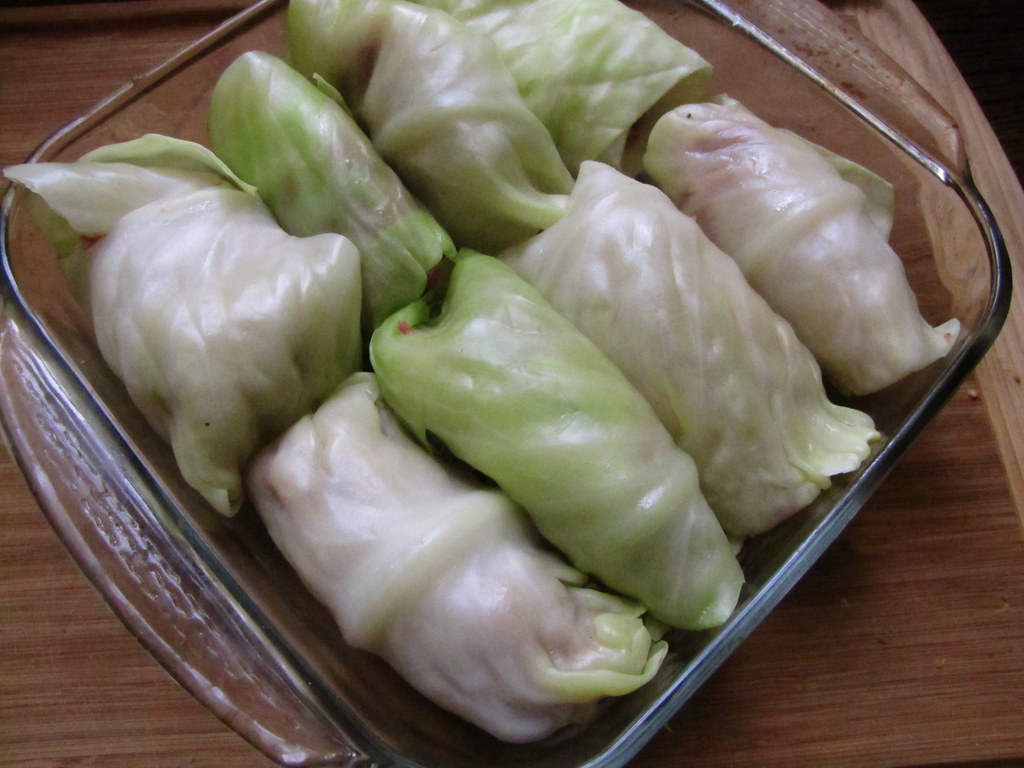 all rolled up in cabbage leaves

In everything went into a mixing bowl: the ground beef, sauteed mirepoix, breadcrumbs and egg. Then, since I’d made a salad with these the night before, I sprinkled in my remaining stash of dried cranberries and roasted pecan bits. It’s something you might find occasionally in meatballs or meatloaf, chopped nuts for a little texture and chewy dried fruit for a sweet touch. So I figured I was making more or less that, inside cabbage leaves, drenched with a tomato sauce and baked. 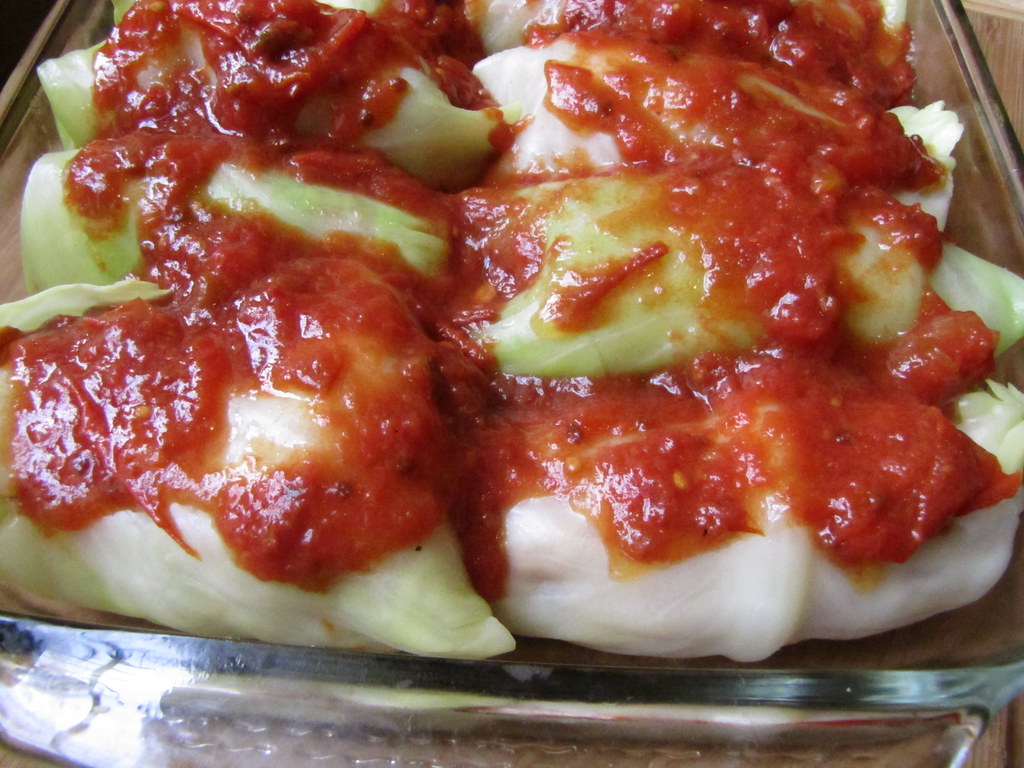 a home-jarred tomato sauce is poured on

You either like the smell of cooking cabbage or you find it funky and fetid; I’m fortunate to be of the former persuasion. Letting these rolls bake in the oven for almost an hour is an odiferous affair, as the cabbage slowly wilts and loses its juice. One last thing I’ve learned to do before serving stuffed cabbage is to always let it sit for at least 30 minutes before attempting to serve it. It can be reheated after that point, or even made the night before. But the cabbagey juices just meld much better with everything that way. Everything, and anything. 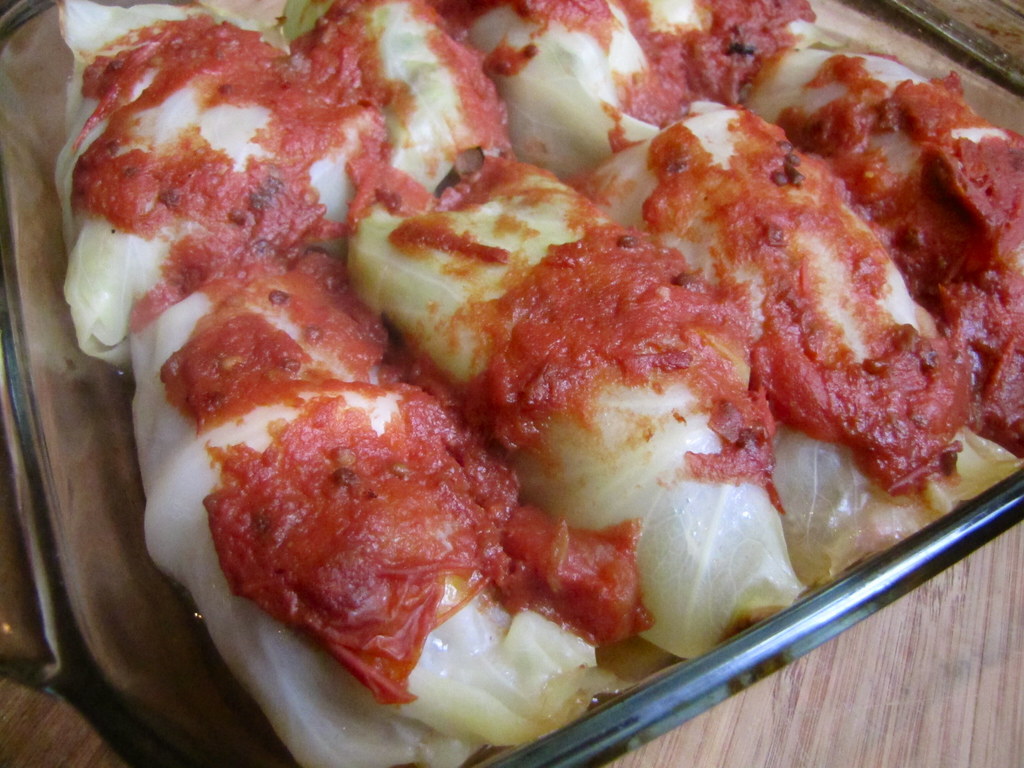 Heat the oil in a skillet and cook the onion, carrot and celery over medium heat for 6-8 minutes, or until translucent. Add the garlic in the last couple minutes of cooking, and season with a pinch of salt and pepper as you stir.

Bring a stockpot of water to boil, enough to fully submerge the head of cabbage. Slice the stem from the cabbage and remove the dirty outer leaves. Blanch the whole head in the water for 1 minute; remove with tongs. Carefully peel the leaves from the head without tearing them too much. If you reach a point where this becomes difficult since the leaves are not blanched, blanch the head in water again. Set aside the good, full, and only slightly torn leaves from the ones that are all shredded up and useless. Finely shred the useless leaves and arrange them in an even layer at the bottom of a square casserole tray.

Preheat oven to 350 degrees. Place a lump of about 1/4 cup of meat filling mixture at the base of one (“good”) cabbage leaf. Fold in the sides (as you would a burrito) and roll it up. Repeat with the remaining leaves and arrange in the casserole dish. Pour tomato sauce over cabbage rolls. Bake uncovered for 40-50 minutes. Let sit, covered, for at least 30 minutes or until juices have settled, and serve.

Five brownie points: More vegetables than meat, while still remaining satisfyingly hearty — my kind of meal. I can’t think of too many more well-rounded one-dish dinners than this one. It makes good use of the year-round green cabbage, which is full of antioxidants, calcium, fiber and more. And there’s tomato sauce, which in my version is little more than simmered, summer-ripe tomatoes, put up. And even if your ground beef isn’t the leanest, it’ll add lots of flavor in just a small quantity, and the extra protein to keep you strong winter long.

Eight brownie points: Even though my last few trips to the Greenmarket have been a little disappointing (just turnips and kohlrabi, again?), there’s so much you can do with just a few vegetables still. It actually makes the task of cooking much simpler, reducing the amount of options there are to buy. At the very least, meat and dairy products are always around, so it’s a good opportunity to play around with those some more. The other ingredients here were found at a winter farmers’ market, too, except the celery. All told, it can be made out of mostly local food pretty much anywhere, anytime.