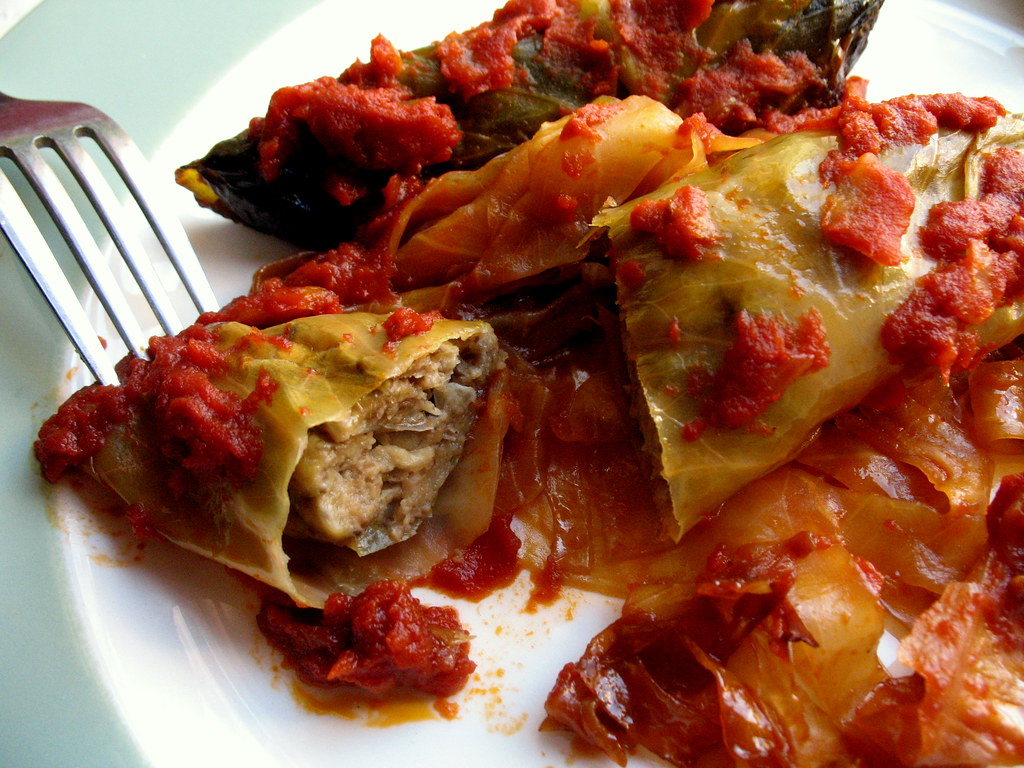 This is the kind of comfort food that I’m talking about when I talk about comfort food — hearty, uncomplicated, slow-cooked and pleasantly easy on your tastebuds. Only I’m not talking about any comfort food from my own sensory memory. This one belongs to Arthur Schwartz, as told in his new cookbook, Jewish Home Cooking: Yiddish Recipes Revisited. 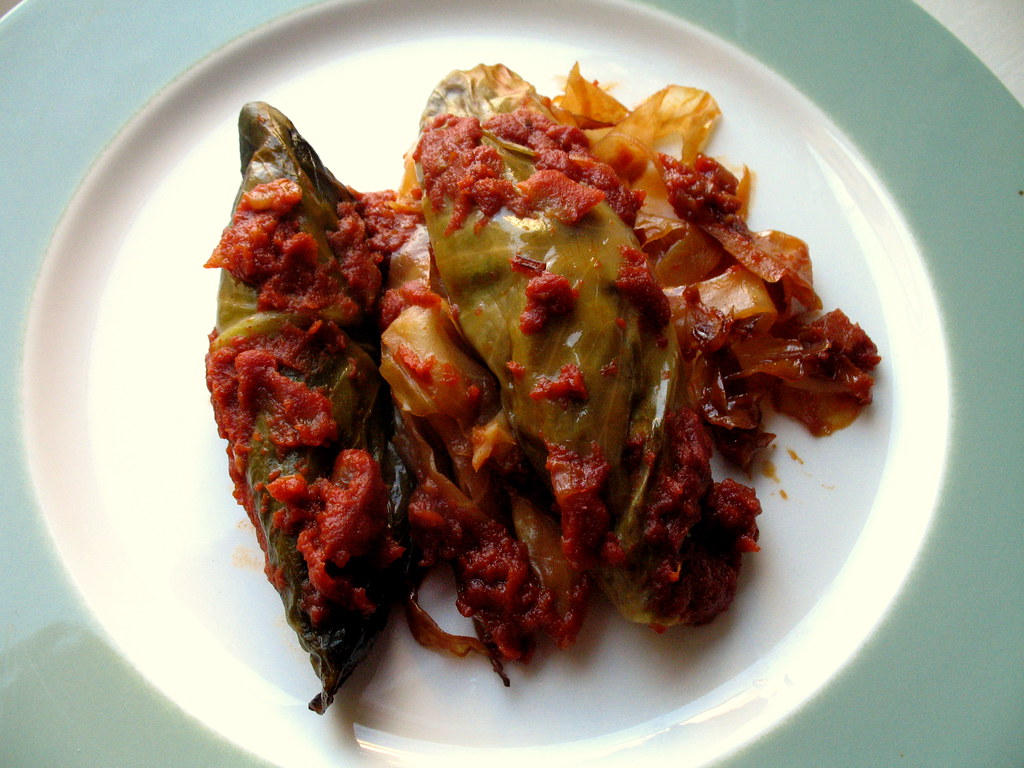 I clarify: This isn’t exactly the authentic Stuffed Cabbage dish from the cookbook. It’s authentic to the original recipe in most respects except that I swapped the ground chuck that its recipe called for for vegetables — in this case, simply mushrooms. I was very honored to sit in while Mr. Schwartz was testing a few recipes from the very cookbook I’m using today. But whenever you have mushrooms that are looking bruised, discolored and generally a little bit “old,” it’s a good time to use them as a flavorful meat substitute. The simple reason is that they yield more flavor when they’re bruised and older. A meatier mushroom like Portobello would have been nice from the get-go, or a more distinct one like Porcini — or a mixture. I would have also liked to try the original meat version of this dish, and probably will at some point. But, in the old world, meat is a luxury. It’s when the immigrants came to America that they began using meat more and more in their traditional foods. I guess I’m going back against the tide, and trying to eat less meat, in order to enjoy it more. So far it’s working out pretty well. And I’m also enjoying the fact that this mushroom version of Arthur’s recipe didn’t disappoint. It must just be a very good recipe — I’m tickled. I don’t miss having meat this time at all.

As far as peasant food goes, it doesn’t get much paler than the old head ‘o winter cabbage. In China, the stodgy old Beijingers can’t fathom a winter without it. It’s such a ubiquitous part of their cookery that this New York Times article talks about how the stuff seems immune to inflation. But it’s not just the Chinese. Obviously, cabbage is in this Yiddish recipe, and it’s found in the pots of poor folk everywhere, from the Irish to the Russian. Being an easy to grow food in harsh climates, the poor plain cabbage has gotten an unglamorous reputation perhaps only for its availability. Taste-wise, it’s exactly the same as a bloated Brussels sprout (that is to say, very bitter and slightly sulfurous), which we all know is enjoying the embrace of a new generation of foodies. Will its grandfather-like white cabbage soon follow? 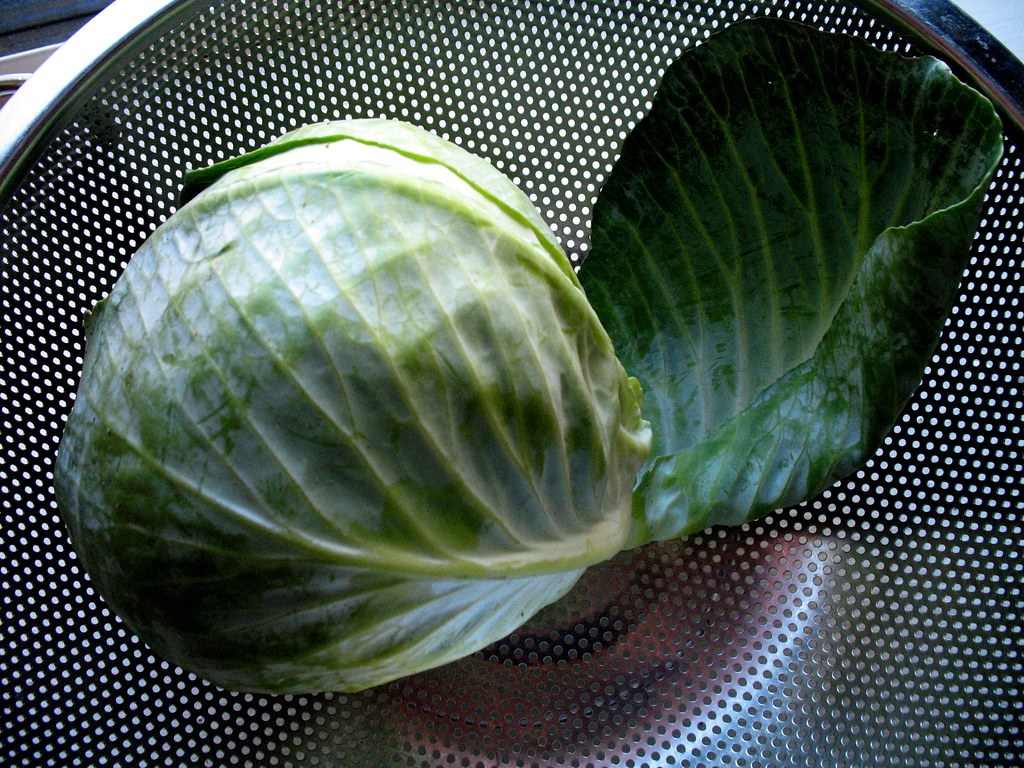 has cabbage ever not been peasant food??

No idea. All I know is that they were probably the cheapest foodstuff at the Grand Army Plaza Greenmarket at $0.69 per pound. So, going on a hunch about the buying habits of trend-driven foodies, probably not anytime soon, unless the farmers get wise to the idea of ratcheting up the price. 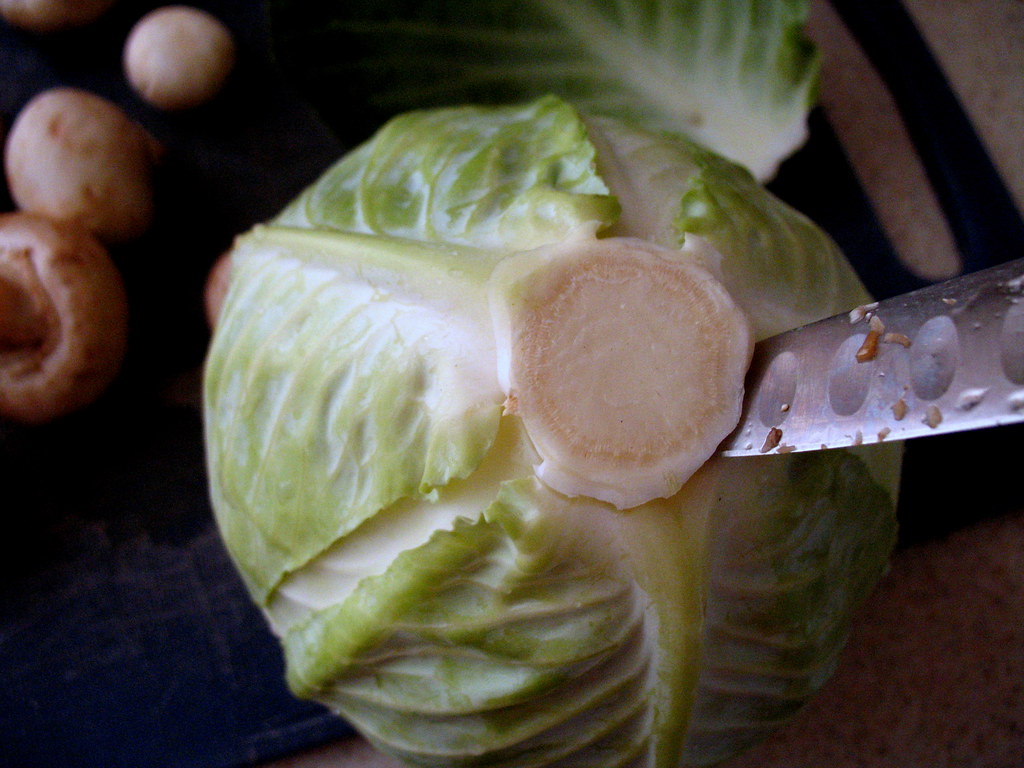 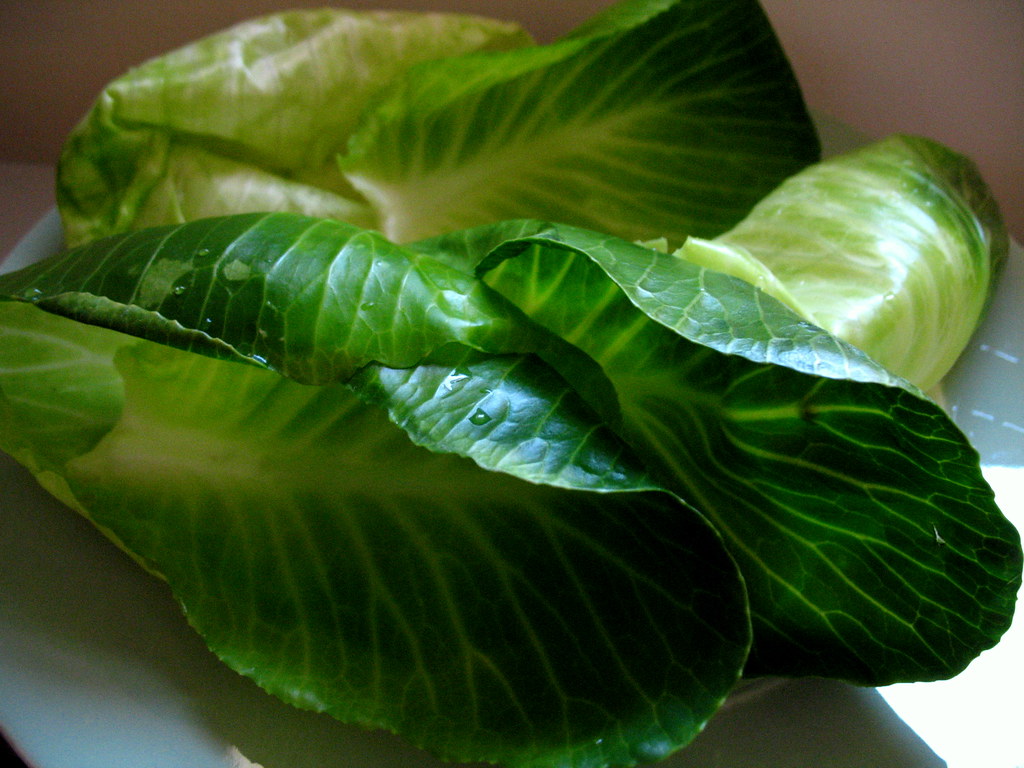 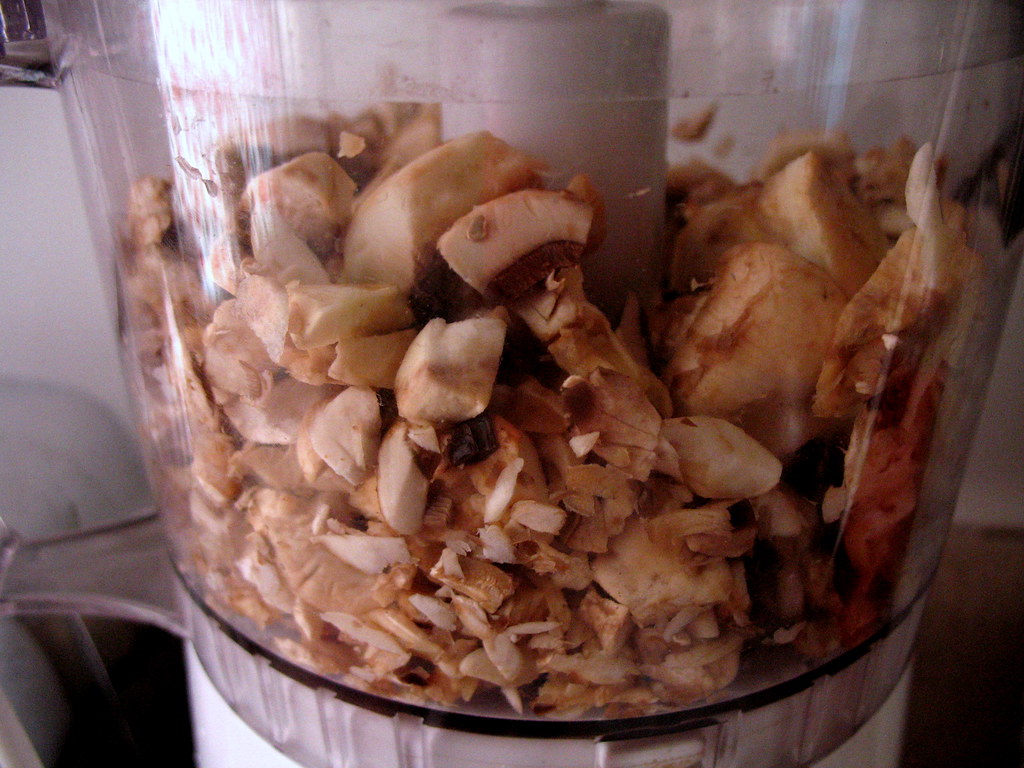 mushrooms go for a little spin

As I mentioned, I’m not Jewish, Ashkenazic, Sephardic, nope. I’m actually a teensy bit German(!). But the method of rolling up a meager amount of the “good” stuff in a plentiful (“boring” stuff) ingredient for its wrapper speaks to almost any cuisine of any nation. I imagine this dish was a practical leftover invention. I’ll have to try it next time I have anything leftover other than old mushrooms. 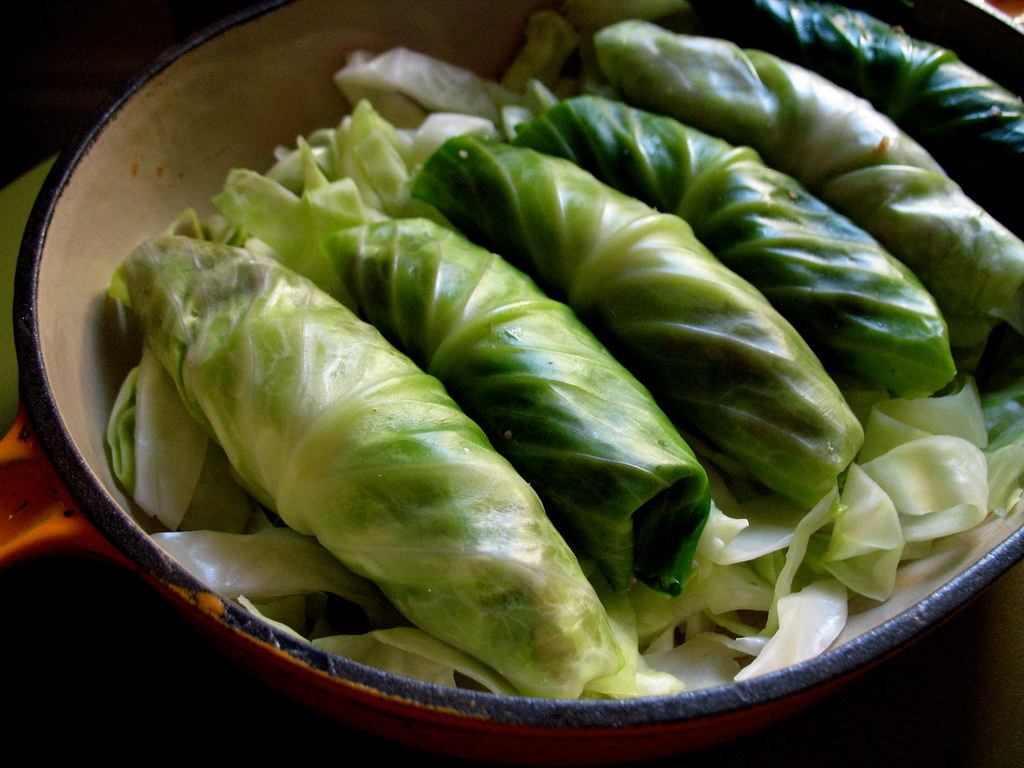 all lined up to bake in a covered casserole 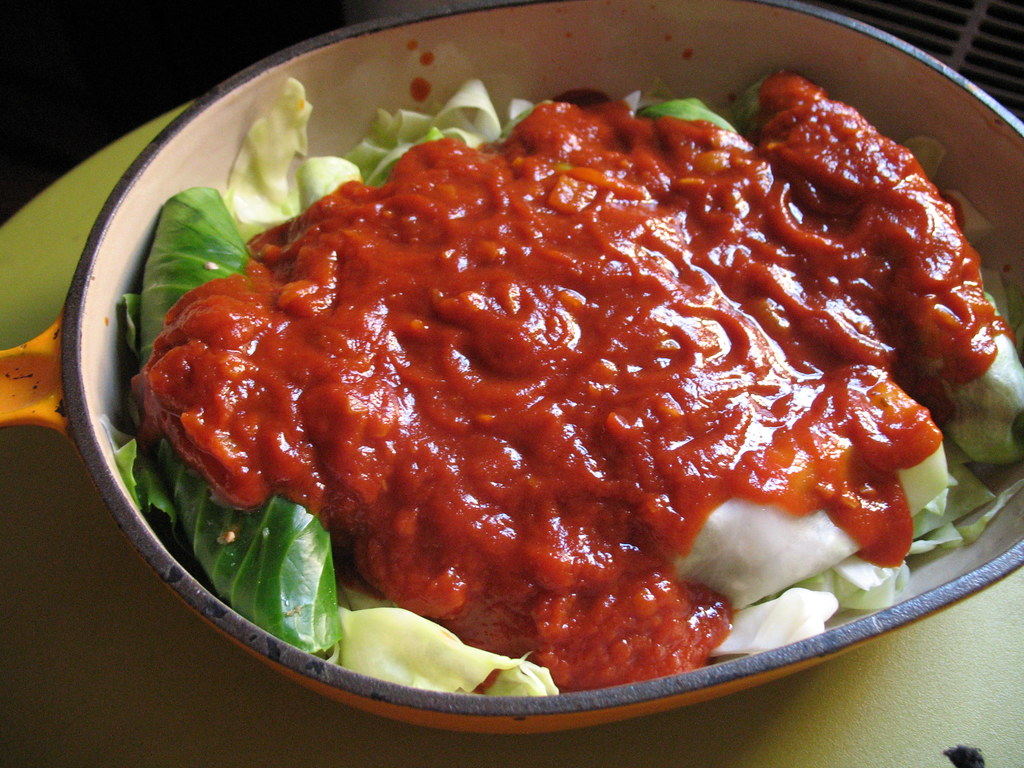 This was an awfully good supper. Not overwhelmingly tasty, but not nearly bland. It made excellent leftovers to take to work, too. I strayed from the cookbook’s recipe just a tad bit more by adding a pinch of grated Parmesan to the mushroom stuffing mixture — hey, there’s no meat, so it’s perfectly Kosher.

Now, just after I count the toll in the Cost Calculator and give the dish its Health Factor rating, I’m going to introduce a new feature I’m adding to this blog, which is the “Green Factor.” I’m pretty sure you can guess already what it means, but this rating will measure a dish’s impact on the environment. How local and seasonal was it? Can it be made or bought easily locally and seasonally ( in the Tri-state region) in the first place? Etc. It’s something that I’ve been keeping in mind when it comes to cooking for a long time, and I suppose is overdue for including in a bona fide (albeit highly guesstimated) calculator on this blog.

Upon deciding what icon I should use to portray green-ness, I chose the maple leaf, mostly for random personal reasons. While I identify and tout myself as very much an urbanite, I did grow up in a suburban town for most of my childhood. There was a large maple tree in my parents’ backyard, and the town we lived in was in fact called Maplewood. With all those leaves in my backyard — my first introduction to nature — I got to thinking early on that most leaves were as broad and tentacled as the maple leaf. They are quite beautiful, and turn a spectrum of colors in the fall, sometimes all at once on the same single leaf. Off the subject we go, but that is essentially why there is a maple leaf representing the Green Factor rating, rather than it being a salute to Canada. Oh, and contrary to the Health Factor rating, where the more brownie points there are, the less healthy the recipe is, the more maple leaves in a recipe’s Green Factor rating, the more environmentally-friendly it is. Got it? Good.

Heat up the onions and olive oil in a saucepan on low heat. In a mixing bowl, crush the tomatoes with your hands for a minute or two until the pieces have broken down to a loose pulp. Add it to the onions just after they have turned slightly transparent, about 5-6 minutes. Add the raisins, if using, and the lemon juice and let simmer, covered for another 10-15 minutes.

Put the mushrooms and shallot in a food processor and pulse a few moments until they have broken down to rough, moist pulp. Remove and turn into a mixing bowl. Add the breadcrumbs (if making from fresh bread, simply pulse the bread a few times in the food processor first). Add the egg, Parmesan, and a pinch each of salt and pepper and mix. Cover with plastic wrap.

Preheat oven to 374 degrees. Bring a stockpot of salted water deep enough to submerge the cabbage in with water. Once it’s boiling, gently add the cabbage and let boil for 1 minute. Remove with tongs or a large spatula and remove 2-3 of the outer leaves. Replace into the pot and boil another minute. Remove, and tear off another 2-3 leaves. Repeat until you have at least 8 leaves big enough to use to wrap with the stuffing. Let the rest of the head cool. Cut out the tough middle fibrous stem of each leaf of cabbage and discard (these should be shaped like a thin diamond and comprise the whitest streak of each leaf). Place an inch-thick log of the mushroom stuffing mixture inside each blanched leaf and wrap, tucking in the end pieces like a burrito, until fully wrapped. You should have approximately 8 fully wrapped leaves. Slice the rest of the remaining cabbage to about 1/2″ inch thick pieces and place along the inside of a covered casserole or large cast-iron Dutch oven. Place each rolled stuffed cabbage leaf in a line on top of the shredded cabbage. Top with the tomato sauce, and cover. Bake covered for 1 hour and 45 minutes. Remove from heat, and let rest, uncovered for 5-10 minutes before serving.

Four brownie points: Have no fear, or very little, to say the least. Even though they pale in comparison to most leafy greens like kale, for instance, white cabbage still offers its fair share of Vitamin K, Vitamin C, and Vitamin A, with a healthy dose of fiber, potassium, magnesium, calcium and iron. These are nothing to sneeze at. When you’re sprucing them up with only some added Vitamin C and lycopene from the lemony tomato sauce, and some mushrooms, you’ll find yourself with a low-carb, happy substitute for your meat-and-potatoes diet. (This time, it’s cabbage-rolled ‘shrooms with a side of more cabbage in tomato sauce. Dare we ask for a better substitute than that?)

Seven maple leaves: Let’s start out real strong, folks. This one’s especially healthy for the environment because, like I mentioned, it utilizes a major winter veggie in cabbage, as well as wintery mushrooms. Things are about to look a little different around here, what with spring vegetables beginning to sprout, and the summer just on the cusp of making its way to the markets. But for the time being, we can revel in a few cold-weather fallbacks like stuffed winter cabbage with wintery mushrooms and a little bread (and imported tomatoes — okay, not green-friendly) to bide our time well.