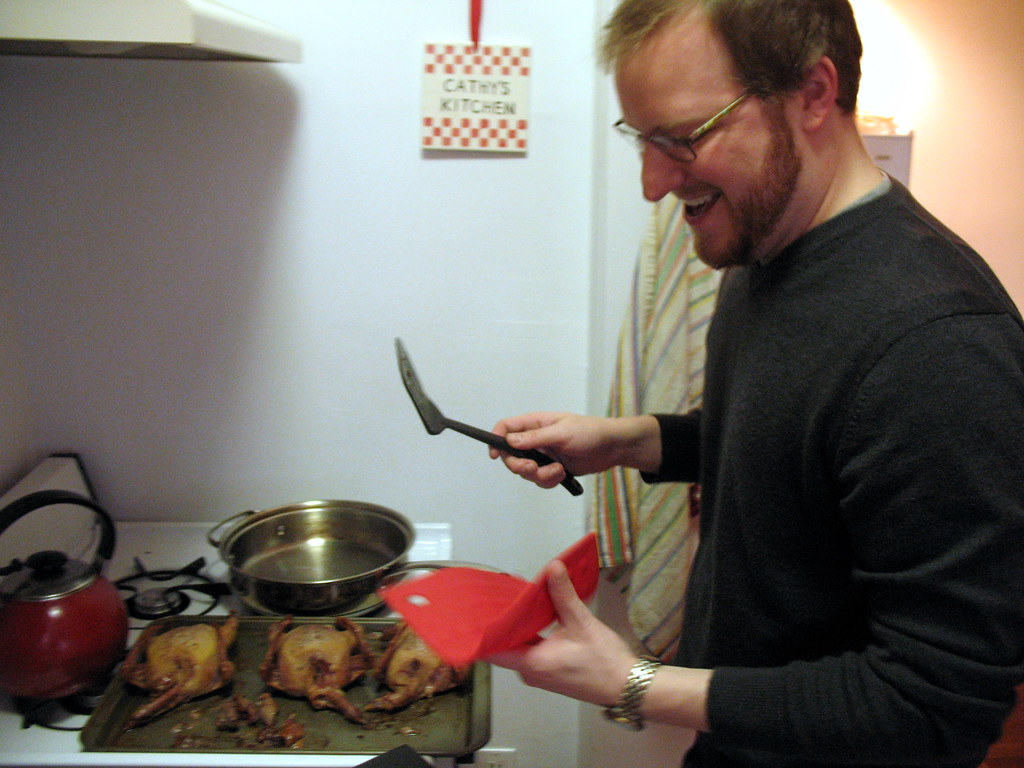 In my kitchen, no less! The author of the just-released manifesto for meat lovers, The Shameless Carnivore, Scott Gold paid a trip to my humble ‘hood this weekend for a rather labor-intensive interview. With three squabs in tow, he test-drove a recipe for pigeon pot pie that he’s contributing to a certain casserole cookbook. (These profiles just keep getting better — pretty soon I’m going to have all subjects air-mail me samples of their cooking before we begin. Kidding.) 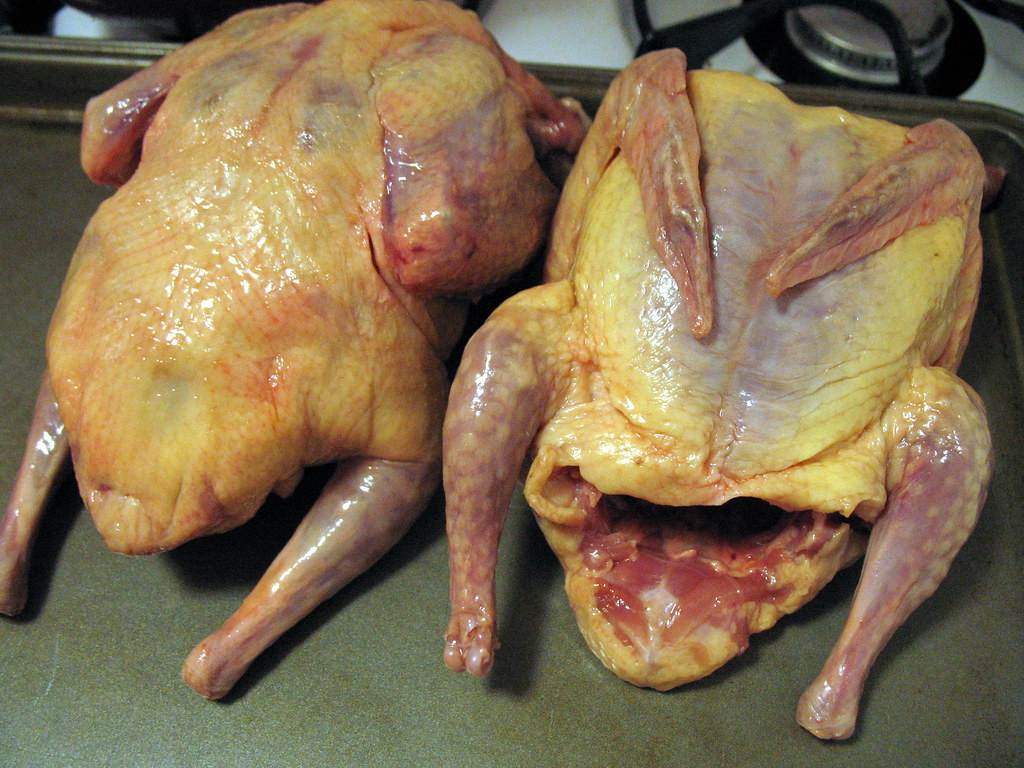 squab-side up, or squab-side down? only the most carnivorous can tell


I know what you’re thinking — you let a shameless, possibly maniacal, carnivore into your home? Near your oven? But this was a pure necessity as it turns out, since Scott does not have an oven in his own Brooklyn apartment. In fact, he didn’t the whole time he was writing his book, cooking up one species after another. The trips he made to other friends’ homes in order to use their facilities, and inevitably share the day’s work, are part of what makes The Shameless Carnivore a fascinating read — the discussion, debate, and pure, communal carnivorism that took place on those occasions sheds light on multiple perspectives concerning meat. Because that’s the meat of the matter, really.

“I had to stop myself from using meat puns in my writing,” Scott confessed. “There are just way too many.”

For the book, Scott’s first-time authoring gig, he first took himself on a crash course of cooking thirty-one types of meat in thirty-one days. And survived to tell the tales. His next few journeys took him to a farm upstate to assist in the butchering of a “sweet” cow named Ernie, and a whirlwind tasting session involving every edible part of a cow (not just Ernie, though). That’s fair exercise for anyone interested in all “sides” of meat eating (okay, now I get what he means about the puns). While I’m no expert on meats, I’ve tasted my share of delicacies like duck and some not-so-delicate ones, like chicken feet (gi jiao!). But bull testicle? Well, you’ll have to read the chapter in which Scott ventures to an annual “Testicle Festival” in Montana for that story. I’ve got nothin’. 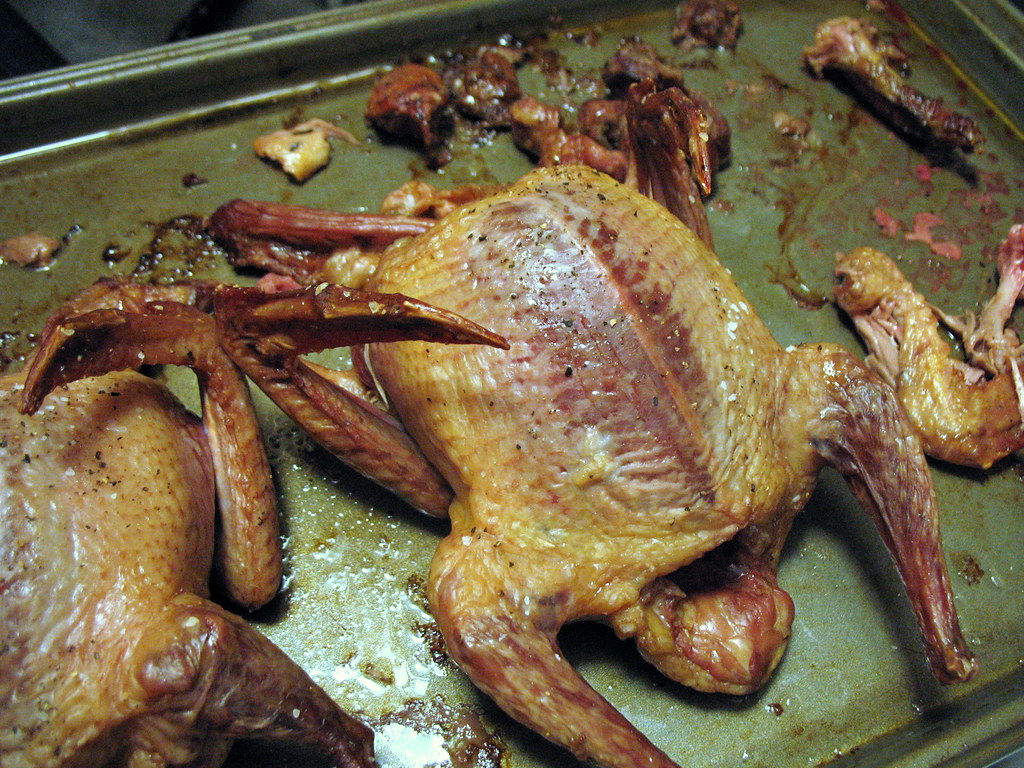 freshly roasted squab, seasoned simply (plus the gizzards for snacking) 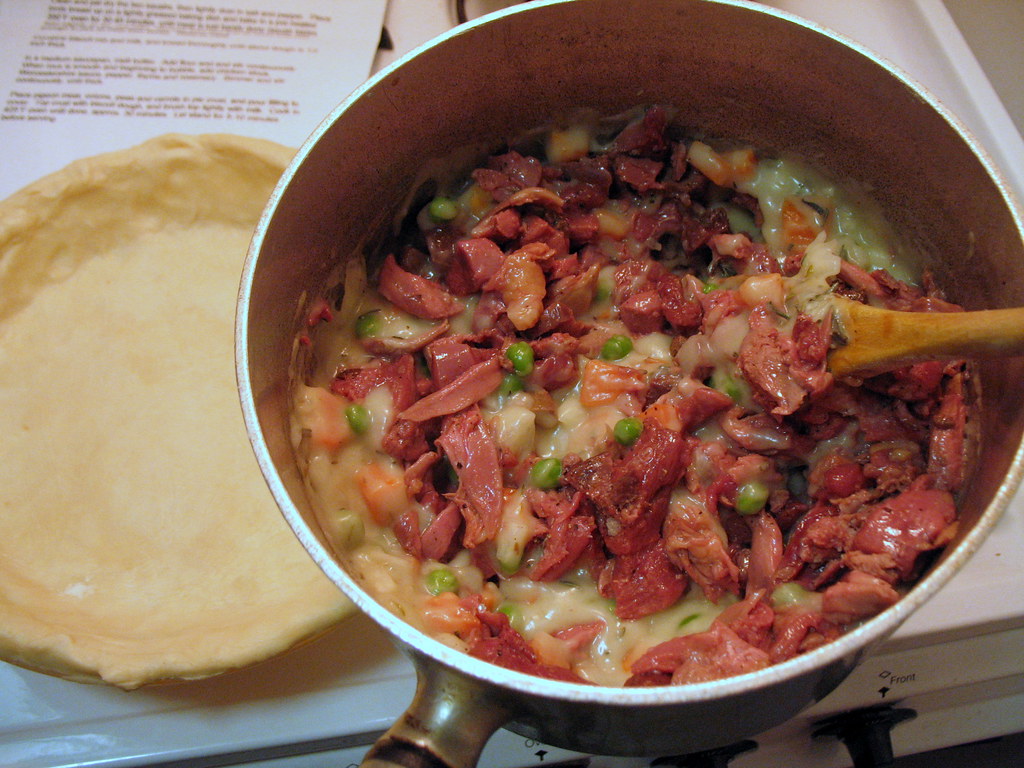 its rare meat joins peas, carrots and onion in a rich gravy 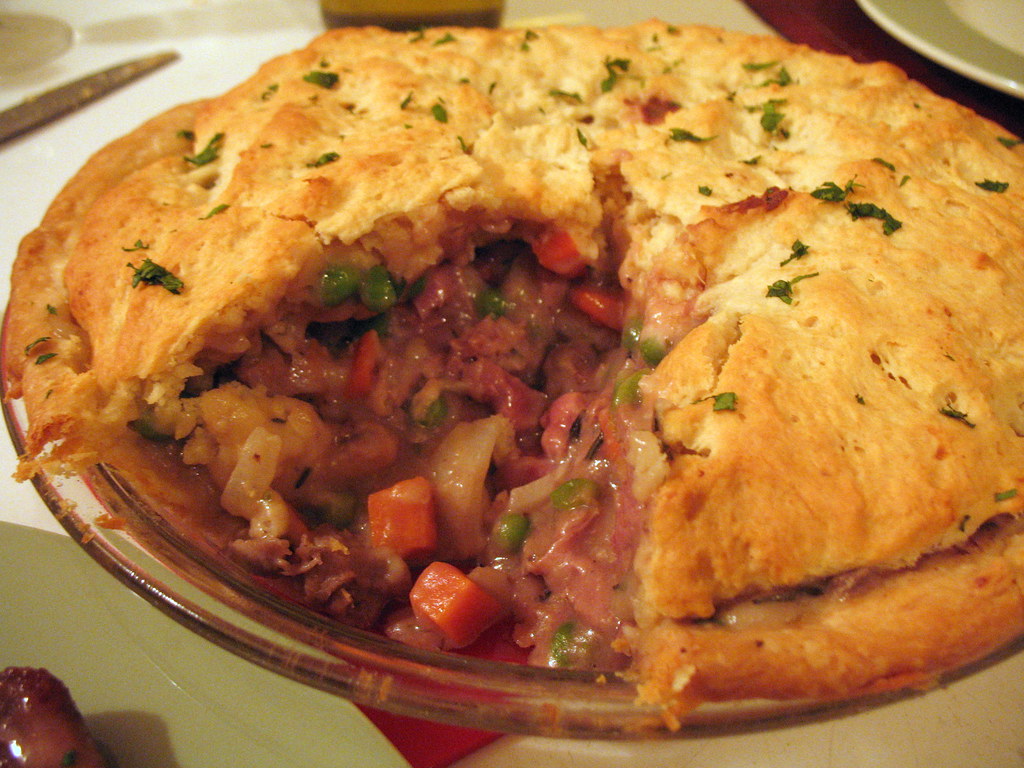 Were you concerned that your book would seem like a backlash to healthy, wholesome and diet-friendly food movements?

When I began the book almost three years ago, the impetus was partly to do a backlash because people began to think that that was the only way to be healthy. But you just need a balanced diet and to know what your body needs — you should eat good meat, and not a ton of it. Grain-fed beef is filled with fat and that’s part of the reason. But there’s a whole resurgence of grass-fed beef, which I think tastes better. It may not be as tender, but if you have a good palate you can taste the grassiness.

Really? You can taste actual grass in the meat?

Uh huh. Not that we ever taste grass enough to really know.

[Not going to go there —Ed]

The subtitle of your book is “A Manifesto for Meat Lovers.” On the cover of the New York Times bestselling In Defense of Food: An Eater’s Manifesto by Michael Pollan, it says: “Eat food. Not too much. Mostly plants.” How would you defend your stance?

It’s a neat juxtaposition — the title draws you in [“A Meat Eater’s Manifesto” –Ed] and gets you to think about eating meat more. Which makes you more thoughtful about buying it and eating it. Most people don’t even seem to want to know how their meat got to their plate. As I started doing research and really digging into the subject, I realized it’s a huge subject from anthropological, historical, nutritional, spiritual and ethical points of view. I wanted to make people hungry, laugh, and also give them something to chew on.

In one section of the book you focus on offal (the interesting bits and pieces of an animal left over from all the prime cuts like organs, etc.) and credit some “meathead” chefs like Mario Batali and David Chang with popularizing them in their restaurants. Do you think that this is something that might eventually become popular with the everyday consumer?

Absolutely, I don’t see why it shouldn’t. It’s because we live in such a rich country that we aren’t accustomed to seeing these parts of animals, because we can afford not to. In poor or developing countries, it’s a great part of their cuisine.

So, what’s the wisest, most practical type of meat I should be buying right now?

Well the wisest is not going to be the most practical. If you know a hunter, you should befriend one, or better yet, become a butcher upstate. It’s the stupid Wall Street cowboys who are ruining the image of hunting — they shoot a deer and take home the head and just the backstraps, and leave the rest of the whole animal behind, usually to the butcher. Meanwhile, that’s a whole lot of meat.

Okay, I should clarify: what’s the wisest meat for me — me, a measly girl in Brooklyn who doesn’t want to hunt — to buy right now? I’m guessing it wouldn’t be beef because we eat too much?

Yeah, we eat too much beef. You can eat beef, but you can also eat too much of it, or pork, for that matter since they’ve become so prevalent. The best place to start would be to make sure what you have is Certified Humane Raised & Handled, which has stickers. You can go to their website to find a list of every place that sells it. But remember, the best meat is going to be at a premium. Go vegetarian two, three nights a week, save your money by not buying bad meat. You don’t need to eat meat every day, but when you save up to buy it, you’ll really appreciate it that much more.

One last thing: Do you have any plans to write extensively on vegetables?