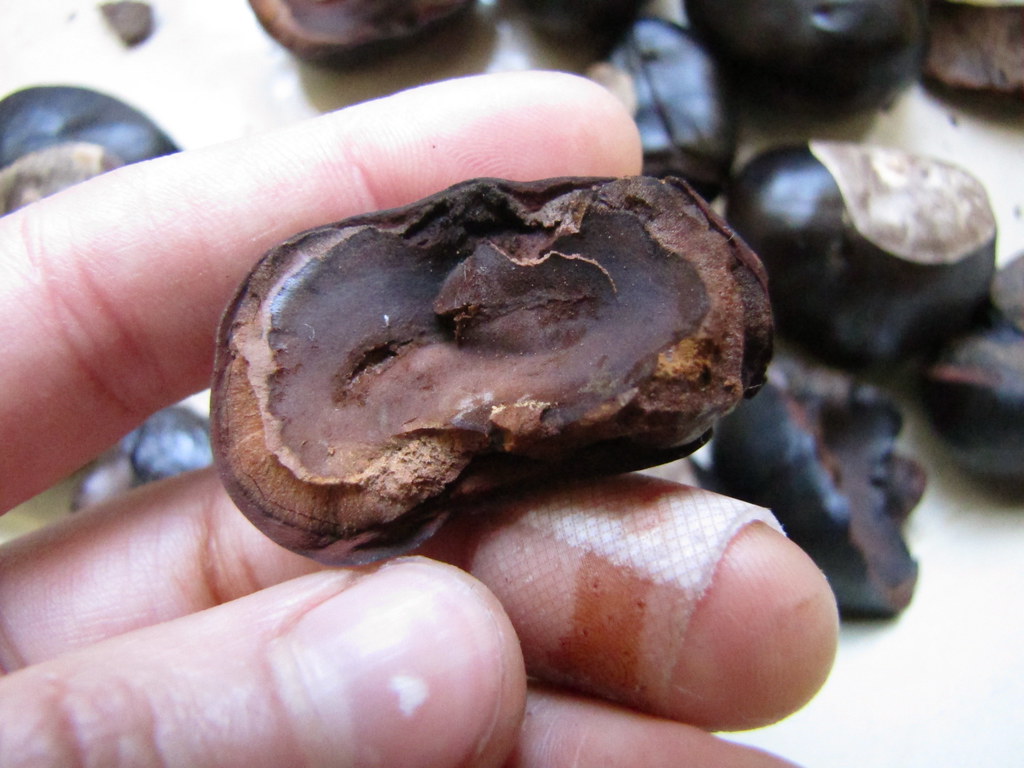 Roasting on an open flame my a$%. It started as an innocent whim, spurred by seasonal lore. But roasting chestnuts, the nostalgic Christmastime snack, unfolded as a series of disasters for me.


I’ve never cooked whole chestnuts before. That novelty is, in most cases, an incentive rather than a detraction to any cooking endeavor. So when chestnuts plopped into my lap from a package that came in the mail, it was a classic sign to figure them out, and something delicious to make with them.

I’d read Smitten Kitchen a few days ago. Deb, through her signature gorgeous photography, had made fetching chestnut cookies. She scored the chestnuts on their “flat sides,” using a paring knife before roasting. I read elsewhere in recipes to score X’s on these nuts in the same manner, too. I didn’t know what I’d do with these chestnuts once they were roasted and ready to use. But I had ideas brimming; a bunch of foodies had some good suggestions after I fired off a Tweet musing what to do with them, and I was also entertaining the thought of crusting a nice fillet of fish with the pieces, crushed up. 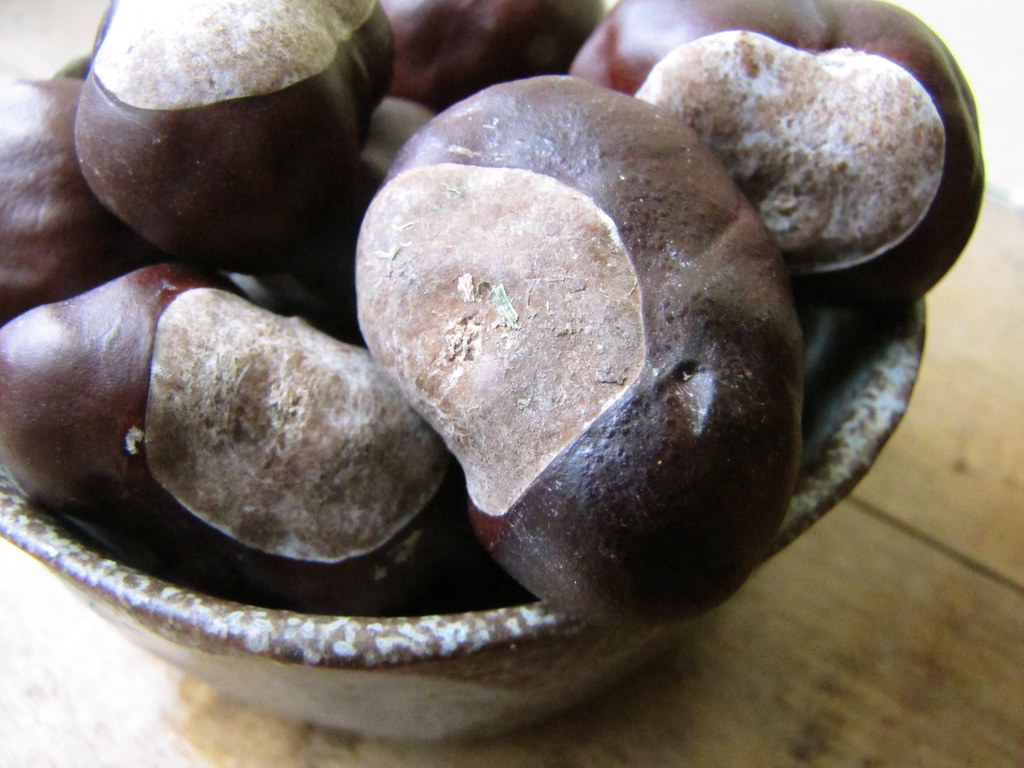 So as I was taking photos of the chestnuts in their raw state, as I’m wont to do before cooking or cutting, I was already writing the post that would accompany a brilliant recipe in my head: “My boyfriend tends to think of chestnuts — like pumpkins — as decoration. He scattered these nuts over the fireplace mantle, as if that were enough. The suggestion was neatly put, but it just made me want to roast them even more.”

Then I got to scoring them. Hm, which were supposed to be the flat sides? Nothing about these nuts were geometrical; none were the same type of warbly-smooth, either. So, settling on the paler brown caps, I placed my pairing knife in one diagonal and pressed. Nothing happened. So I pressed the knife a little harder, and the pebble-like nut slipped out from under it, and the next moment I was ramming my paring knife into the tip of my middle finger.

Rivers of blood. Minutes of agony and squeezing with paper towels went by, before the finger’s circulation was cut off enough to calm down. After dressing the wound, which tore across the side of my finger and part of the nail, I went back to the chestnuts. It took me half an hour to decide to tread onward with them.

Forget the scoring. Onto roasting, and I’d figure out how to open them later. Deb’s recipe had said to preheat the oven to 450 degrees to let the chestnuts roast. Another online recipe said 425. I went with 450, if only to get this over with quicker. Deb, I’m sorry to call you out again, I’m not blaming you. But these chestnuts were black, like extra dark-roasted coffee beans, when they came out. I could hear them popping like enormous kernels of corn inside the oven after the first couple minutes, and feared they’d rattled something loose in the mechanics inside. 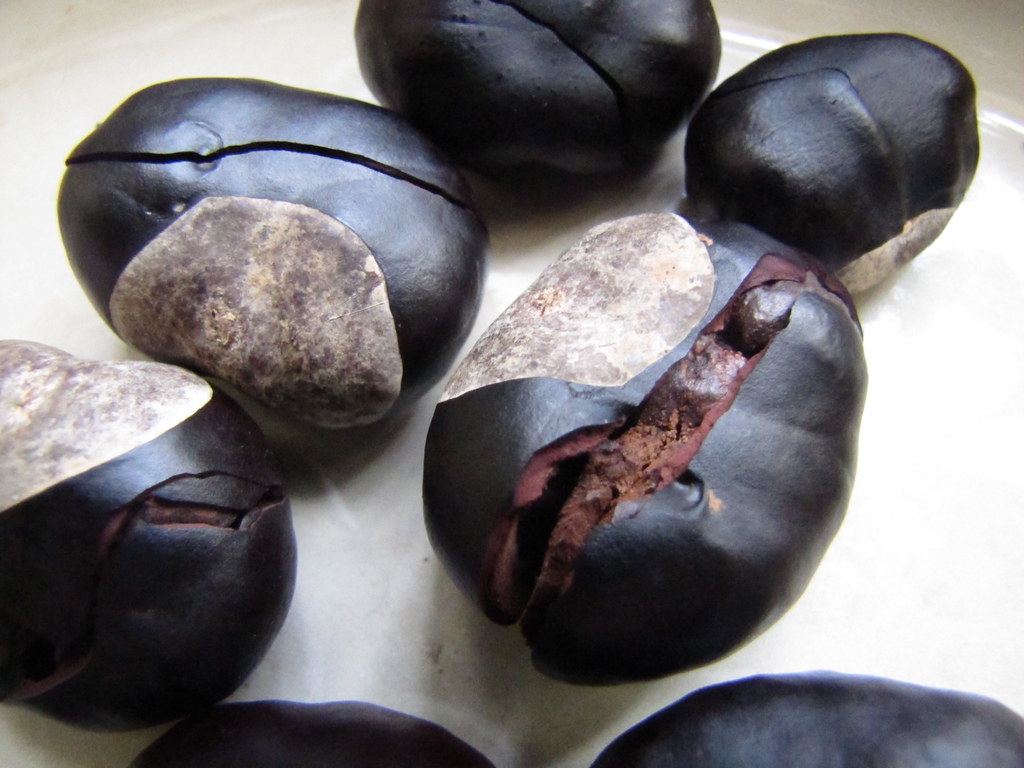 I’m not sure, maybe my chestnuts were cursed by the spirit of Christmases past. But what came out of the oven, twenty minutes later after “roasting” was inedible. It is incredible that many of them broke open, and maybe some are still laying on the oven floor, that way. Of the ones whose shells were cracked, I was able to pry them apart, but nothing inside resembled a nut. Removed of all its shell, I couldn’t cut one open, not that I was going to press very hard anymore with a knife. Of the ones that didn’t open, lobster crackers wouldn’t do the trick. I guess I should have a classic soldier nutcracker at home, too, on the mantle perhaps. But I doubt that would do the job as well. 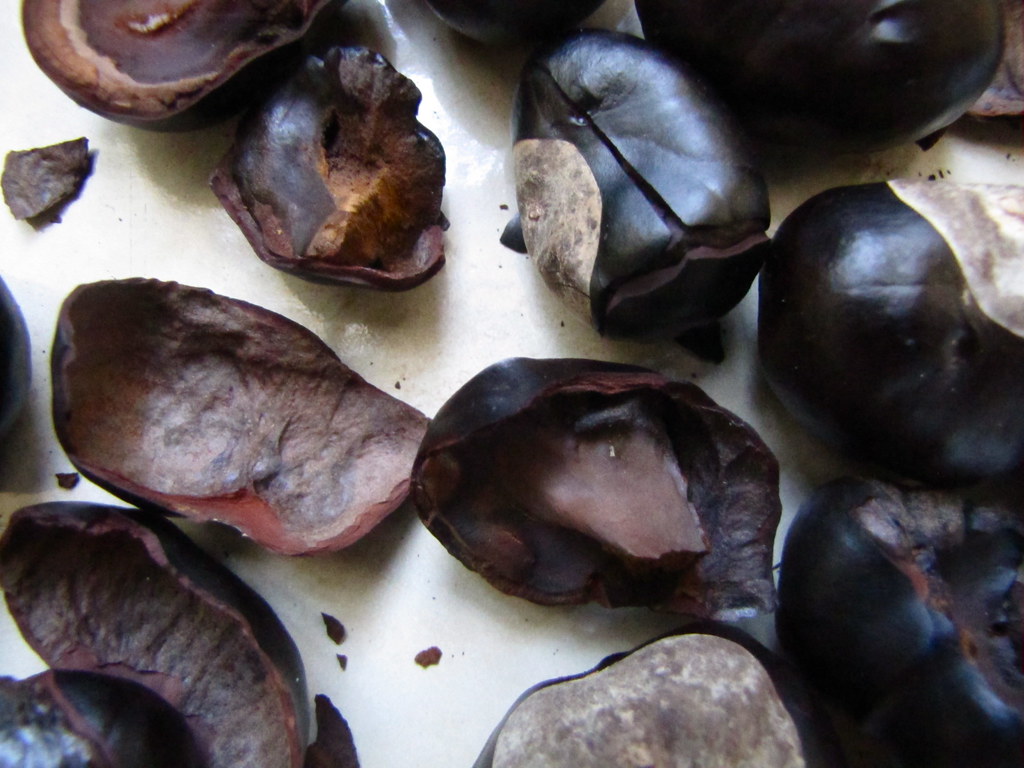 The worst part about trying and prying at these charcoal briquettes of chestnuts was the pressure it put on my cut finger, every time. There was a moment when a nut slipped, and squeezed the middle finger right at the tip, sending forth a fresh surge of blood. So, I’m giving up on this one for now. Thanks for all the suggestions anyway.

Headed off to a holiday party with beets in tow instead. You know, simply roasted? Good stuff, and seasonal, too.