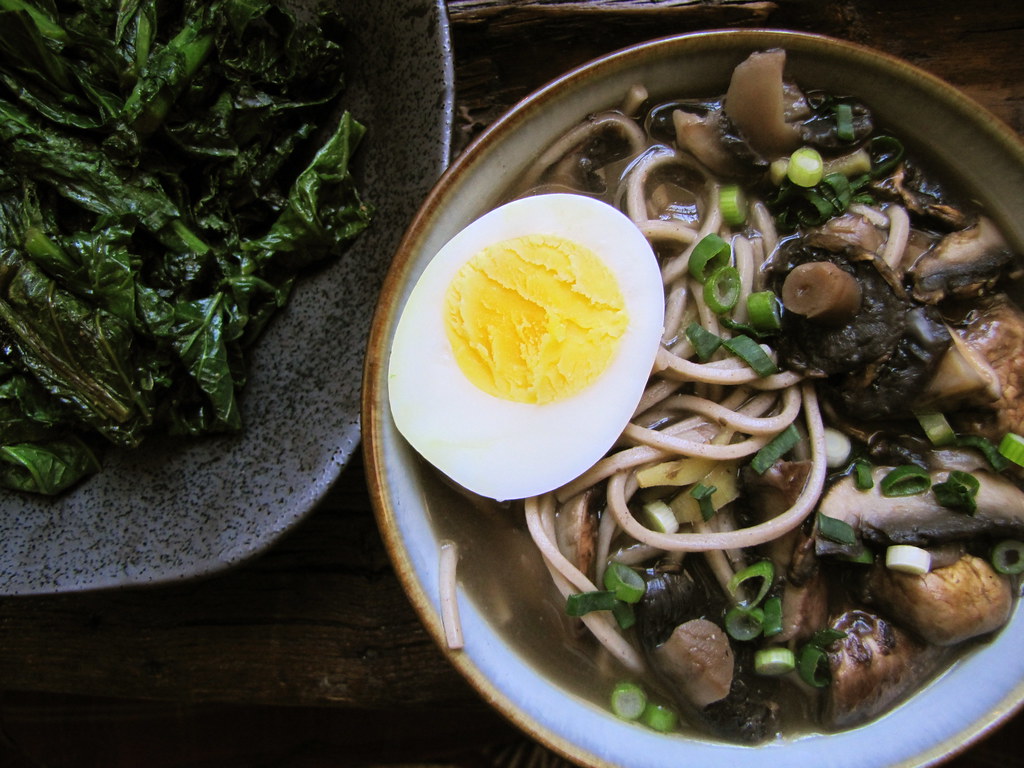 You could say I’m on a bit of a soba kick lately. I’ve been slurping up a great bowl of buckwheat noodle soup for breakfast, lunch or dinner almost every day these past few chilly weeks. Let’s talk about the soba in a bit; a really good bowl of any noodle soup, in my opinion, is in the soup. It’s generally thought that a good broth takes hours or even days to make right. But I’ve figured out a quick and easy system for turning out a savory mushroom stock that doesn’t taste like instant powder and is, moreover, completely natural and vegetable-based. So there’s hardly any time needed to prepare a bowl like this in the morning, no matter how hungover I am (and I won’t be for long).


Among over-processed foods that serve as empty calories, I have a soft spot for instant ramen. Thankfully, it doesn’t have to be a guilty pleasure with this much tastier, and almost as convenient, hot bowl of soba instead. Slurping up hot soup is a classic way to soothe the body, and for good reason. The temperature encourages quick absorption of nutrients, and (real) stock is chock full of them. In the case of soba, so are the noodles; made of buckwheat flour, the whole-grain noodle was originally popularized in Japan to increase thiamin consumption. (I wonder if they’ll ever come out with a buckwheat version of instant ramen… ) 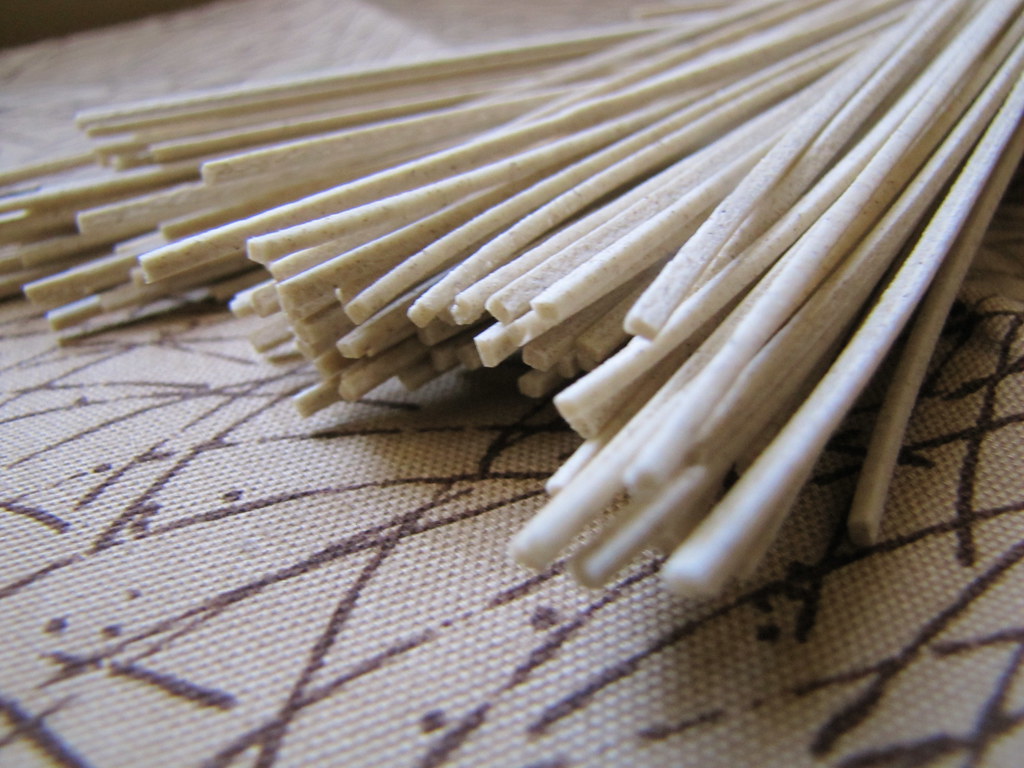 Aside from the noodles themselves, all this bowl needs are some mushrooms, and a dab of miso paste or splash of soy sauce at the end. Mushrooms are pretty amazing. They have a strong umami essence and it only takes a few moments of sizzling — not hours of simmering — to release it. If I splurged on fresh mushrooms at the market, I’ll slice a handful of them and let them sizzle in sesame oil with a few strips of fresh ginger for a couple minutes. The brown juices that drool from them are pretty impossible to miss. 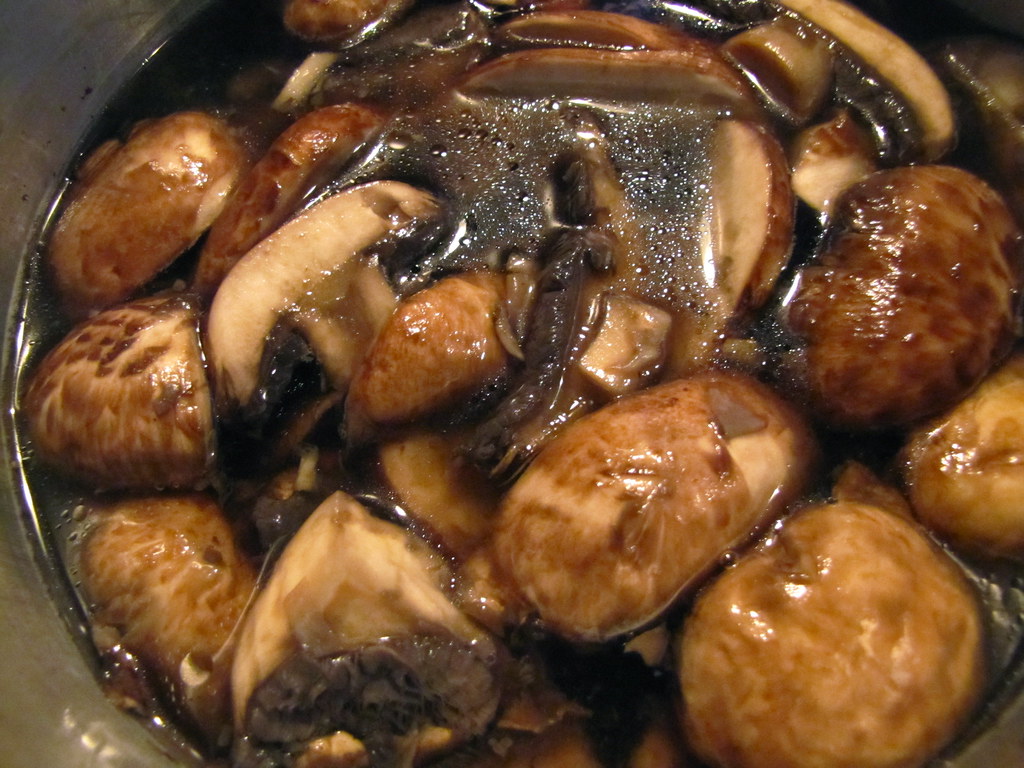 When using fresh mushrooms, shiitake’s your best bet. But crimini make a pretty good substitute, so rich and earthy they are, too. Wild mushrooms like oyster and maitake (aka hen of the woods) are good, too, but don’t get trumpet mushrooms or something else similarly pale if you’re going for a deep brown mushroom stock, with lots of flavor. Enoki mushrooms (the thin, crunchy clusters) are fine for floating on top of your bowl, but they’re not very flavorful when used alone. 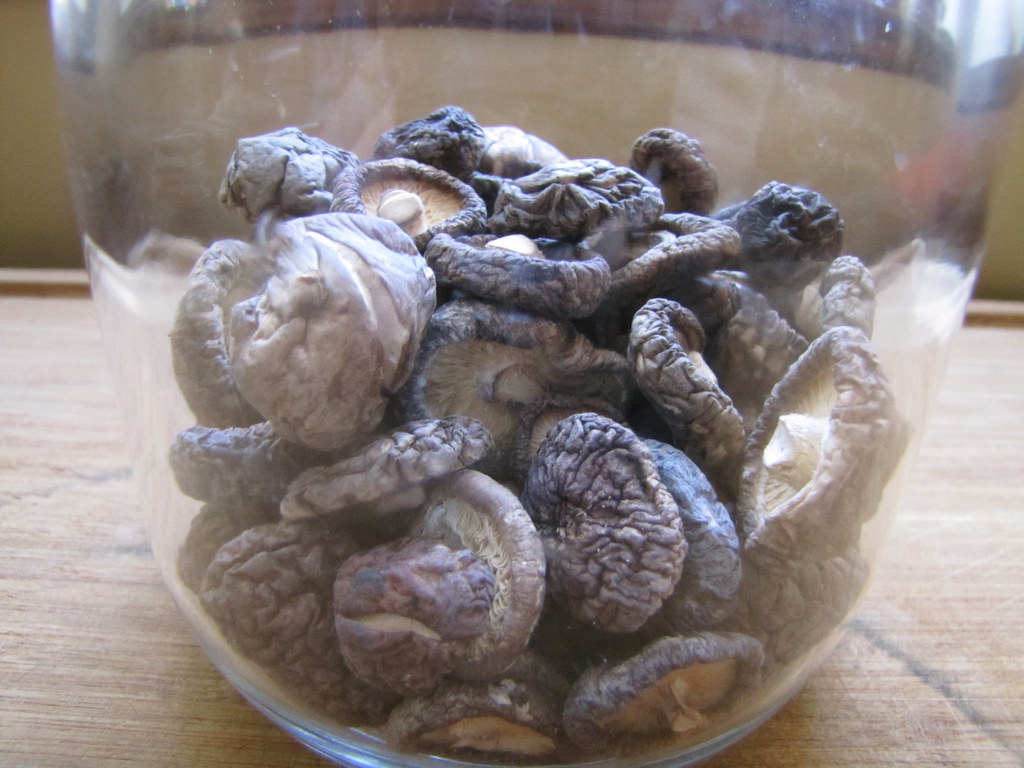 dried shiitake mushrooms in a jar

Then there’s dried shiitake mushrooms, which I use often. These can be found at any Asian grocery store, and are much lighter on your budget. When using them, all you have to do is bring some water to boil, and let the dried mushrooms steep in it, covered, about fifteen minutes. The soaking water can then be used as part of the broth. 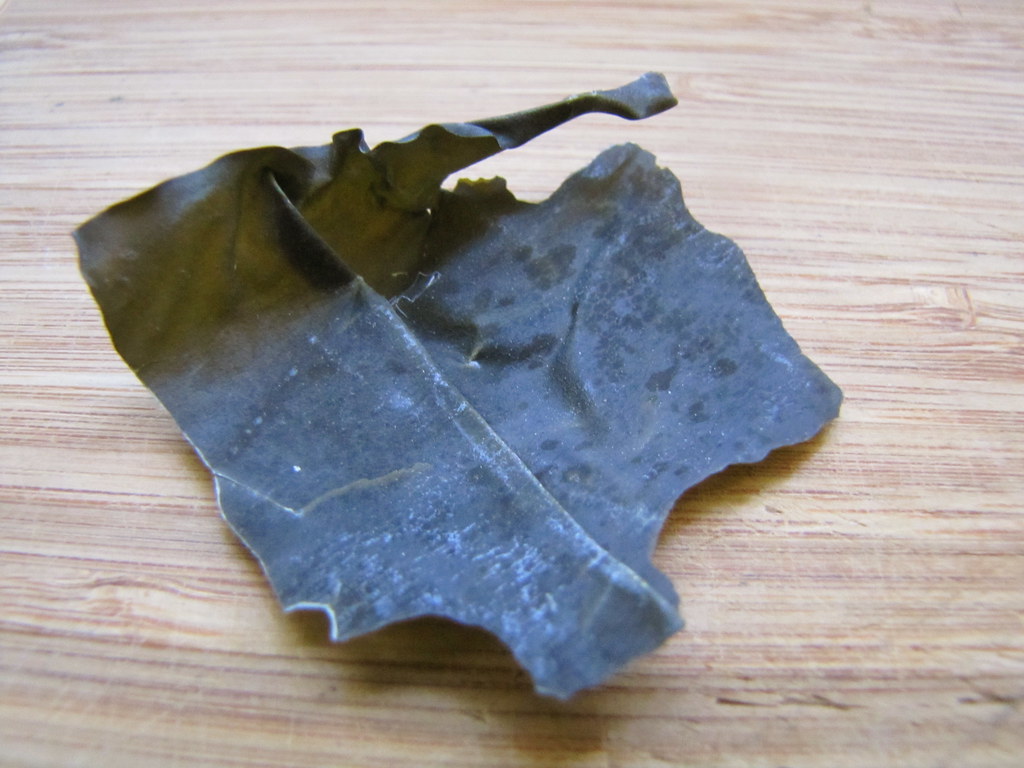 Whenever possible, I break off a small piece of kombu (dried seaweed, but not the roasted, thin sheets known as nori, for sushi), and soak it in cold water for a few minutes before I start. This helps draw out the seaweedy flavor even more than just bringing a pot to boil with the broken piece tossed in. The resulting stock, in any case, is dashi — or “sea stock” in Japanese — and that’s the basis for the rest of the soup. 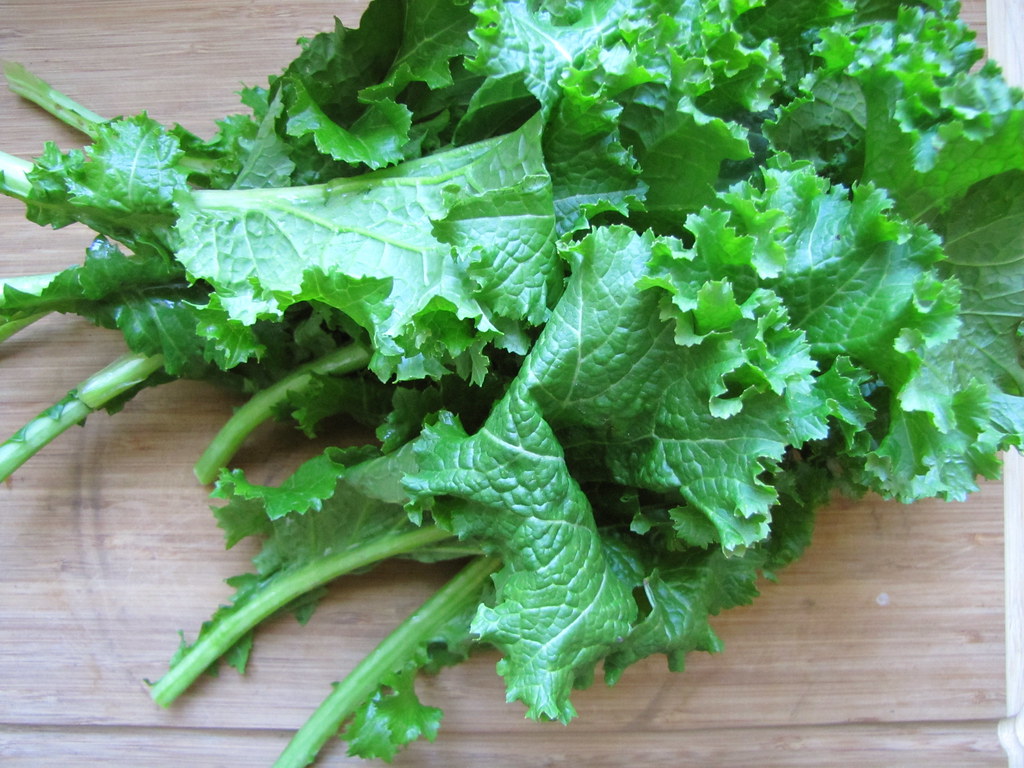 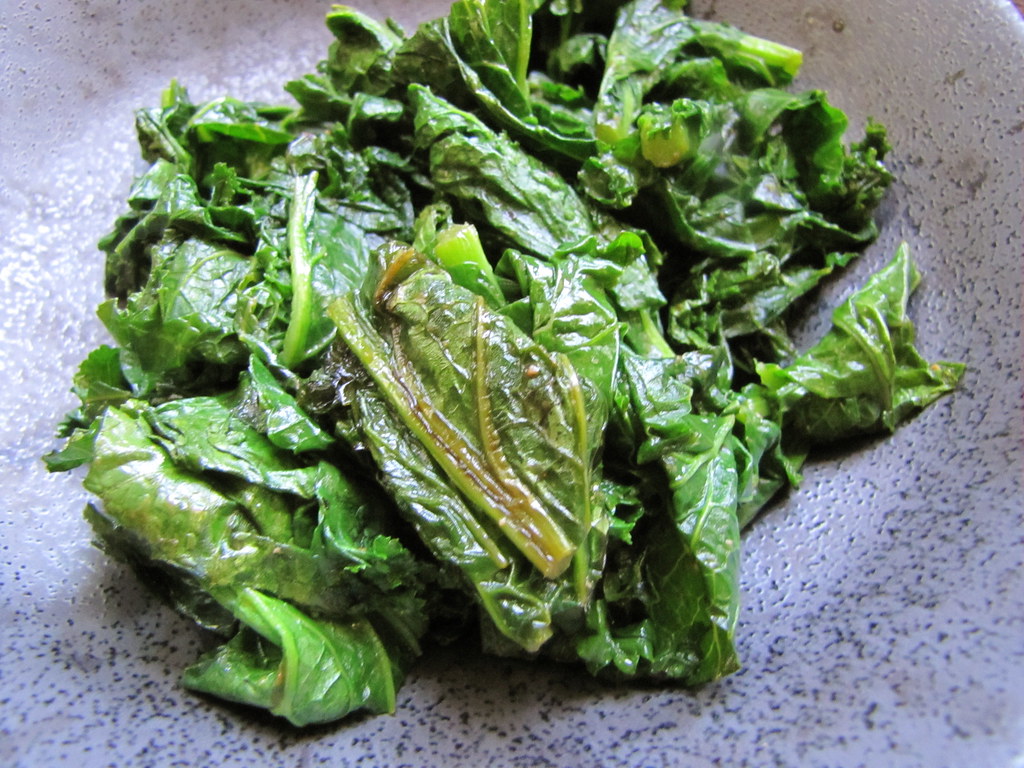 Greens, especially tender leafy greens that wilt quickly in hot water, are great for crowding the bowl, as well as bits of leftover meat, and an egg. Since I had a huge bunch of mustard greens recently, I braised it with miso paste separately, to serve at the same time. You can never eat too much greens, I figure, so why try to stuff it all in the same bowl with noodles? I’ve included a recipe for this braised mustard greens dish, too, since I thought it paired so nicely with the dark miso, and could make a good side dish for anything. 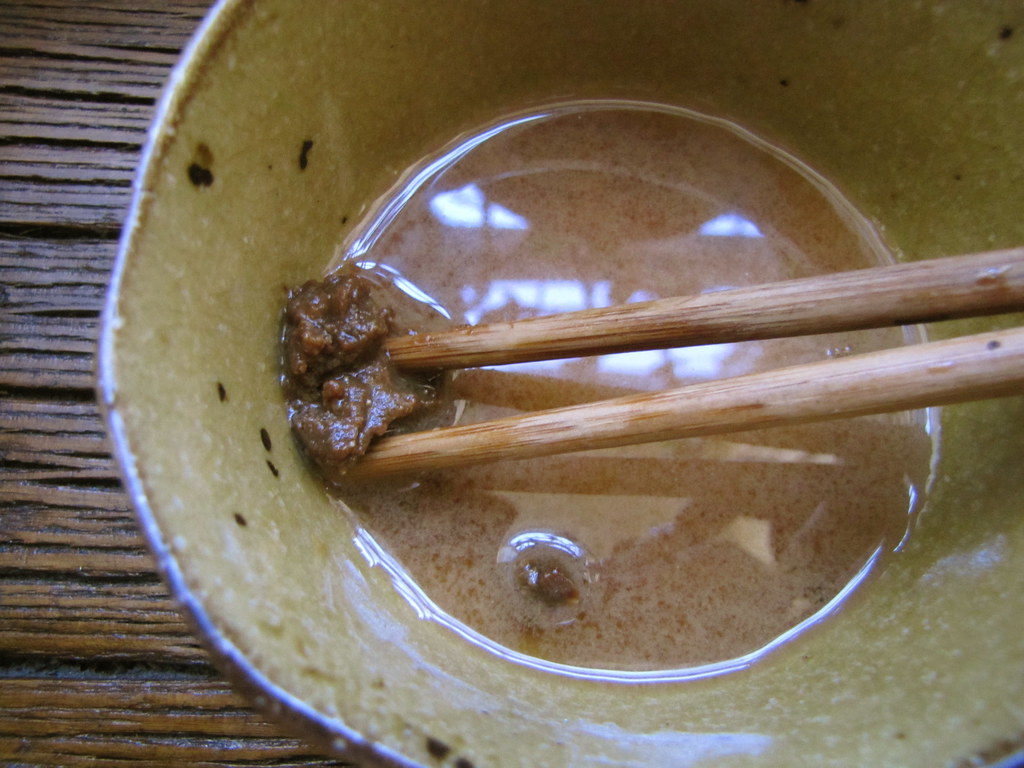 The final touch of flavor comes from stirring in a little soy sauce or miso paste to the hot mushroom broth. I usually save this for the end, to best gauge saltiness once it’s boiled down a bit. With miso soup, you never want to bring it to a boil. It’s not very easy to mix by just tossing in a glop of paste into a pot. So take a ladle of your boiling stock, and transfer it to a small bowl, to mix with a dab of miso paste. Once it’s completely dissolved, add that to the soup. Taste, and do again if you wish. Then, if you don’t have miso paste handy, a mushroom-soy soup is terrific, too; simply sprinkle the soy sauce right in the soup to taste.

That’s pretty much how I make mushroom soba noodle soup. I’ve had soba noodle soups of all flavors, but somehow the earthy mushrooms makes the slight nuttiness of the noodles sing most for me. Last tip, in case that wasn’t enough: save your mushroom stems. Boil them in water once you’ve amassed a great bunch. The resulting broth is handy to keep in the fridge, for using as “water” when you start making another bowl.

mushrooms (and stems) about to be boiled for a savory stock

Place the kombu in a pot of about 4 cups cold water. If adding an egg, place it in the cold water, and bring to a boil. Boil for 5 minutes or until egg is hard-boiled. Remove egg from water and set aside.

In another medium-sized pot, heat the sesame oil and ginger and add all the fresh mushrooms. (If using dried mushrooms, add them to the kombu water in the first step.) Cook, stirring, until mushrooms begin to release juices, about 2-3 minutes. Add the hot kombu water. Bring to a boil. Add the soba noodles once it’s at a roiling boil. Cook until noodles are tender (according to directions on package, usually about 5 minutes). Remove from heat.

Place a ladle of the cooking water in a small bowl and stir in the miso paste until completely dissolved. Add this to the noodle soup. (If just using soy sauce, add right into the noodle soup to taste.) Divide noodles and soup into two bowls. Peel the egg and slice in half. Top each bowl with the scallions and an egg half and serve.

Heat oil over high flame and add the mustard greens. Cook, stirring, a minute or two. Mix the miso paste with the water in a small bowl. Pour into the mustard greens and stir. Cover and cook 2-3 minutes. Remove lid, stir, and serve.

Cost Calculator
(for both recipes)

One brownie point: I can’t think of very much bad to say about this one. Except that sodium levels can get out of control if you don’t keep it in check. A modest dab of miso paste or soy sauce fills in for any table salt in both the soup and the braised greens, which is a much healthier alternative. In the case of miso paste, the fermented soybeans are a good source of B12 vitamins as well as protein in addition to flavoring food. Using fresh mushrooms instead of dried is preferred for the most health benefits, as they’re richer in calcium, iron, potassium, and have been linked with helping to reduce the risk of many diseases. And the spicy, bitterness of mustard greens is a good indication of their detoxifying agents. It’s also up there with collard greens and kale in its cholesterol-reducing capacities, and Vitamins K, A and C.

Five maple leaves: The mushrooms and mustard greens were both hardy winter veggies grown locally at this time, and I picked up both, as well as the scallions and eggs, at the Grand Army Plaza Greenmarket last Saturday. The miso paste I found was an organic brand, and one tub seems like it will last for about a hundred noodle soups to come. All told, the ingredients in this dish are easy staples to keep on hand, or find nearby any time of the year.