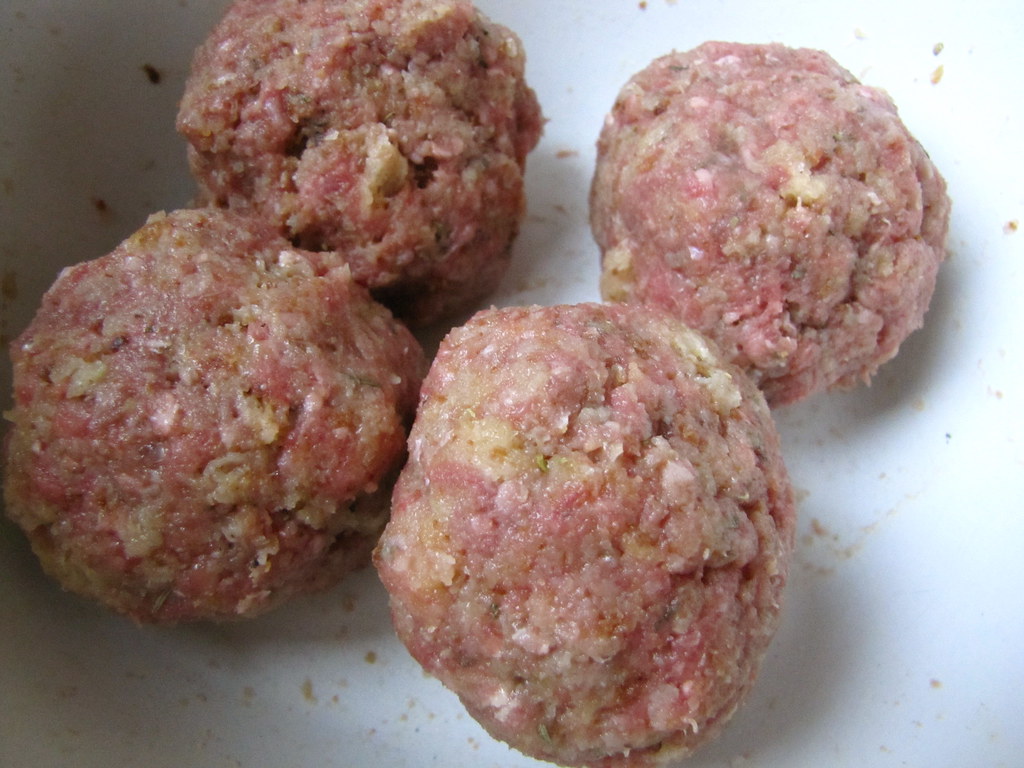 For those readers who have been around long enough to notice, I took a vacation from “Reason of the Month” posts beginning in May, that would last through the summer and fall. The idea was to focus on Lunch at Sixpoint during the height of gardening season. (Which, you could say is one long extension of Reason #42: Because You Can Grow Your Own Food.) But now that it’s almost winter, I’ve found a great new reason to start up these posts again. I made spaghetti and meatballs for the first time this year. It was the perfect comfort-food meal to ring in a new season of eating in.


The first twirl my fork danced around a tangle of noodles, drenched in red sauce, I was lost in a cozy place that transcended time. See, if there’s one dish my mom mastered of her adopted country of America, it was this. Growing up, spaghetti and meatballs was a good thing to hear when, “What’s for dinner?” was asked, because it was equally loved by all. It was a common answer, too, thanks to that. I loved it because noodles were fun to play with, and the large, brown balls of seasoned breadcrumbs and meat had a chewy crust and pillowy softness to the middle. Getting one meatball on your plate would be almost enough to fill up on alone, but being the food-enforcing Chinese mother that she was, my mom would always pile two or three on my plate.

These days, meatballs, and spaghetti, have danced their way to a plum place in food at restaurants, too. There’s a restaurant devoted to the ball entirely; spaghetti (instead of, say, linguine, or bucatini) no longer denotes “low class” at a restaurant; there was a meatball cook-off in Brooklyn this year where several restaurants faced off with the food; that contest’s winner, Frankies Spuntino, studs their balls with golden raisins and pinenuts, and it’s one of the biggest draws at the place. Yet for all the revamping and rebranding of the homey dish, spaghetti with meatballs is something that everyone and their mom, cousin or aunt could whip up — and they probably have. 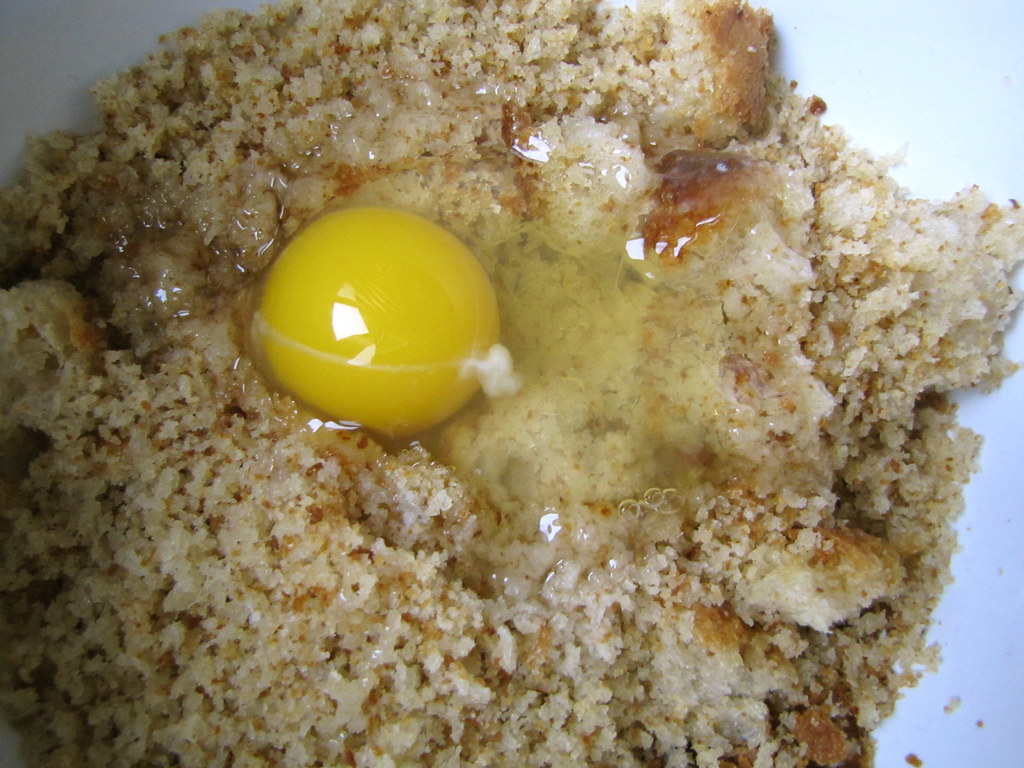 My mom would use spaghetti sauce from a jar and noodles from a box, but she would always make the meatballs from scratch. It was nothing fancy: she’d take breadcrumbs (admittedly, from a canister), crack an egg into them, and fold the ground beef in. The tennis ball-sized hunks she’d form would first be browned all over in a saucepan, before being added to the red sauce. This gave them crispy edges and funny shapes, sort of like octagonal rolling dice. They were perfectly seasoned throughout, as my mom would usually let the meat mixture sit in the fridge, covered, for a little while before cooking (just as when making dumpling filling with ground pork). This allowed it to sort of marinate, and the breadcrumbs to get soggier and eventually fluff up the meatballs.

I haven’t thought to make spaghetti with meatballs in maybe two or three years, preferring Bolognese meat sauces or sausages with pasta instead. But a leftover, stale crust of focaccia bread gave me the impetus. The focaccia was from SCRATCHBread bakery in Brooklyn, and it was littered with rosemary and sage leaves, and plenty of salt. Crushed up, they’d make great meatball breadcrumbs, I thought, with olive oil to each crumb, too. 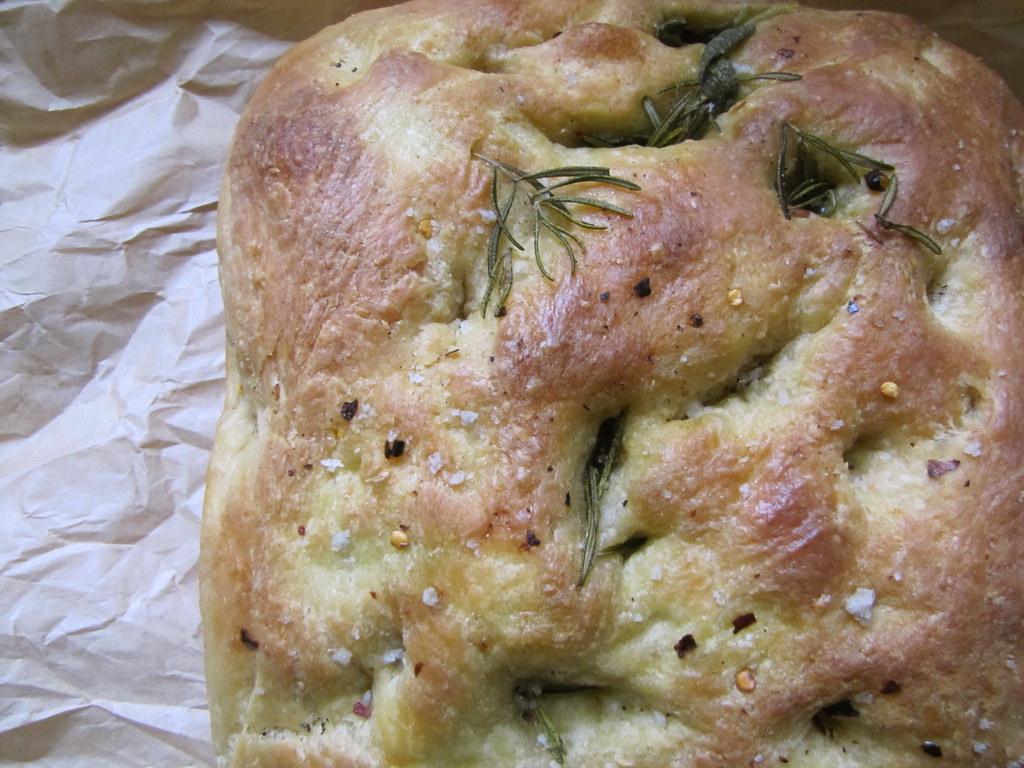 Taking a cue from meatloaf-making, I splashed a little milk into the fresh breadcrumbs and beaten egg mixture, and let that soak for a few minutes. I thought I had a bit too many breadcrumbs for the half-pound of ground chuck I got (from a local butcher in Upstate New York — I’m on a brief vacation), but the ratio turned out pleasing results: a moist, spongelike center, with irregular patches of juicy meat and puffs of soaked breadcrumb custard.

Here’s a double recipe of just how I did it this time, and hope you enjoy as much as I did. Have a favorite meatball recipe, or must-have ingredients in them? Do share. 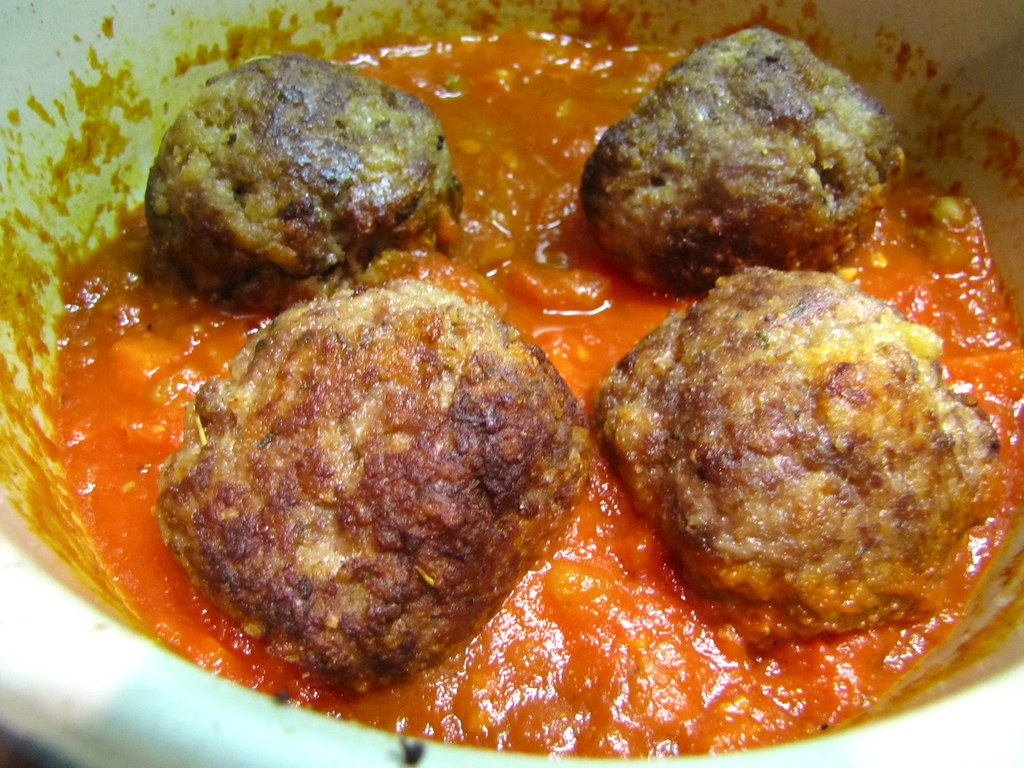 Make the tomato sauce: Sweat the onions, celery and carrots in the olive oil for several minutes, stirring occasionally, until well-softened. Season with salt and pepper and add the garlic and red pepper flakes towards the end. Crush the tomatoes with your hands and add them, including all their juice, to the pot. Add any herbs desired. Bring to a boil, reduce heat, and simmer, covered, for at least 30 minutes, or ideally 1 hour. Taste for seasoning and add salt and pepper as desired.

Make the meatballs: In a large bowl, beat the eggs and add the milk. Add the breadcrumbs and squeeze to let each crumb absorb liquids. Set aside a few minutes while you prepare other things. Add ground beef to the bowl and season well with generous pinches of salt, pepper and herbs (be wary of how much salt or herbs is already on your foccaccia, however). Fold gently with your hands to evenly distribute. Form mixture into 8 balls. Cover and chill.

Bring a large pot of salted water to boil for the spaghetti. Drop in the spaghetti and cook according to the directions on package. Meanwhile, heat a tablespoon of olive oil in a large, wide pan or Dutch oven. Place down each meatball in the oil, evenly spaced apart. Let cook over medium or medium-low heat until gently browned. Gently flip each meatball to another side and cook until gently browned. Repeat until all sides are browned and meatballs are cooked through completely, about 10 minutes. Transfer meatballs to drain on paper towels. Add the meatballs to the pre-made tomato sauce, and serve with the spaghetti.