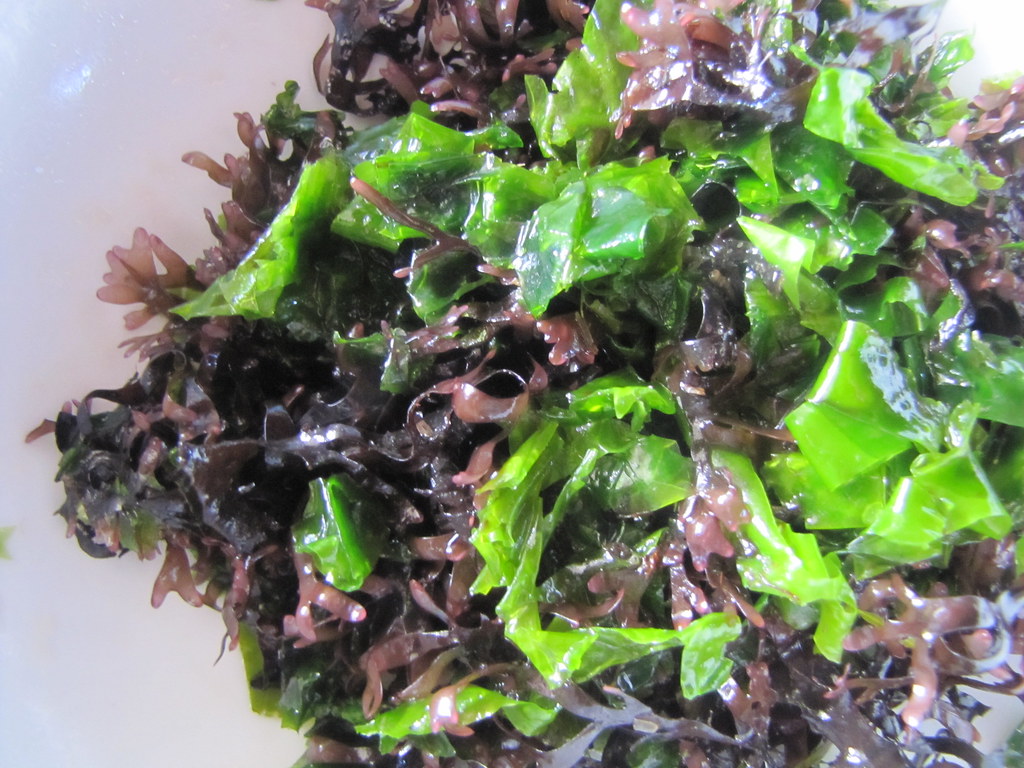 It’s a ubiquitous side on the sushi restaurant menu, but “seaweed salad” is just weeds from the sea, tossed with dressing. Often, it’s made from dried and reconstituted seaweed sheets, shred into ribbons. You can get packages of the dried stuff at any Japanese grocery. Or, if you’re at the beach, you’ll come across it, fresh, for sure.


Well, I was at a beach last week and couldn’t help but pick up several types of washed-up seaweed. We’ve gone over foraging for wild edibles in the park here, and I’ve digressed on the wonder of finding wild oysters on Mark Bittman’s blog, too. But I have to admit, this was something that even I had to muster a little courage to eat. I’ve never picked up seaweed, cleaned it, and eaten it before. 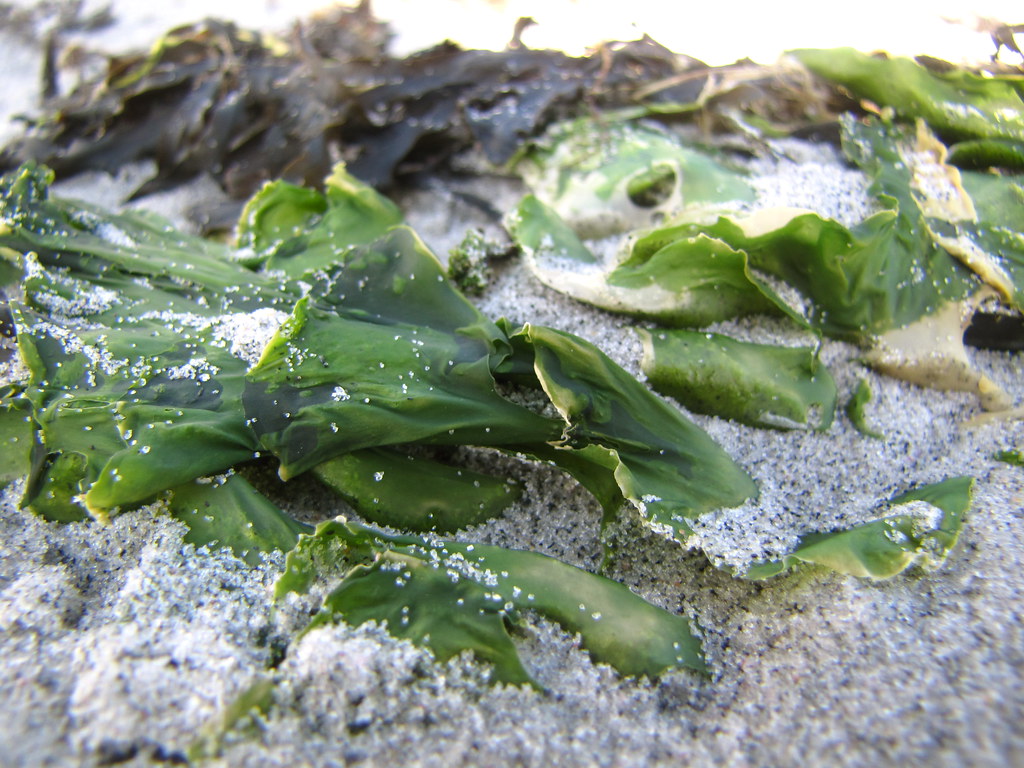 Neither had my mom, though she’d be more apt to, having grown up in Asia where seaweed is much more commonly eaten. “You can eat that?” she asked, apprehensive, as I collected the choicest greens from the beach (as if I knew what that should entail). There were plenty of thin, rubbery sheets of “sea lettuce,” the shocking lime-green type with ruffled edges like its namesake. I also picked up snarled clumps brown seaweed, which is perhaps less favored by eaters and looks like a delicate mess of coral.

“Of course,” I shrugged her off, pretending that I knew way more than she. As I continued to pick up, feel, and sniff various translucent, rubbery sheets, I was encouraged by a few things. For one, the stretch of Connecticut shore we were standing on was privately owned, and there wasn’t another soul on it the whole morning. The water looked clear enough, and I’ve eaten plenty of fish, mollusks and crustaceans from this same Long Island sound. Also, a few weeks ago at a barbecue, a friend had taken dried seaweed sheets from a package and let it soak. She then drained it and tossed it with sesame dressing, and it was a big hit on the spread. I’d wanted to copy this since, but hadn’t made it to the Asian market to get the seaweed yet. (Which is invariably dried wakame seaweed, a popular deep-green type slightly thicker than my sea lettuce.) Finally, at a seafood market down the street, they were selling packages of “local” seaweed salad.

So what was the difference between foraging for weeds from the land and the sea?

As with wild foraging for anything, you do want to be extra-cautious of what you collect. Would you eat fish or other seafood that lives in these waters, too? Are there signs of meddling by any other life forms on this stuff? You want to be the first one to get your hands on it. A good rule of thumb from an expert forager I’ve learned is to never go overboard on eating something new the first time. Have a little, and wait a day. If nothing happens to you, you’re good to go forth and eat more. 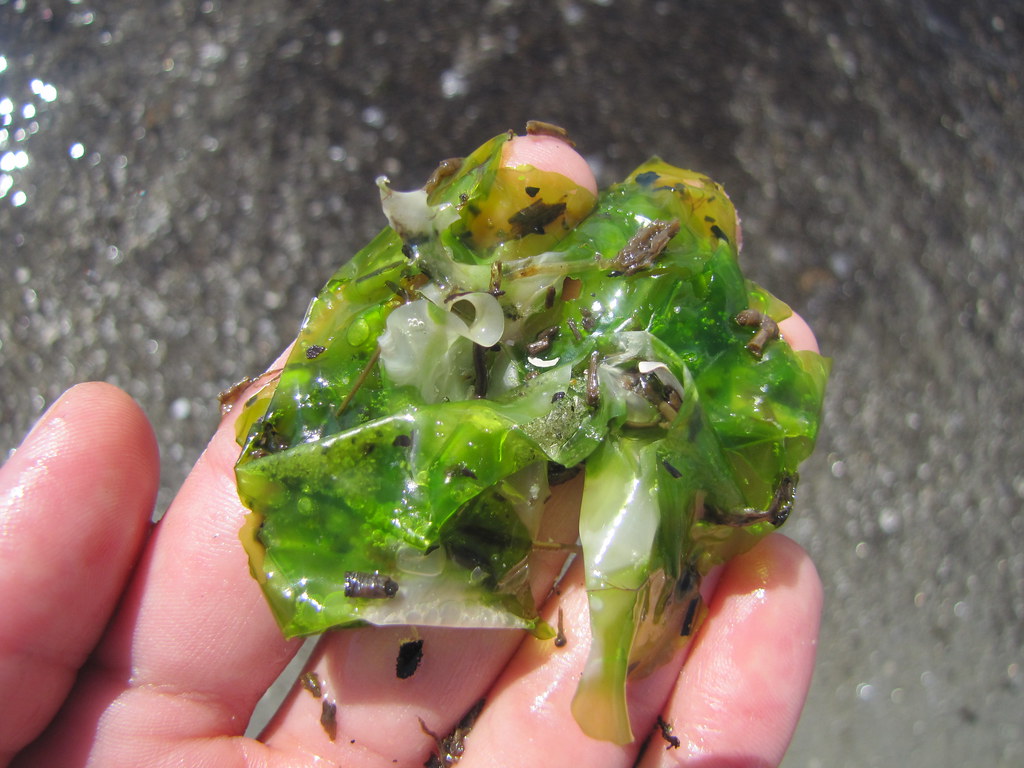 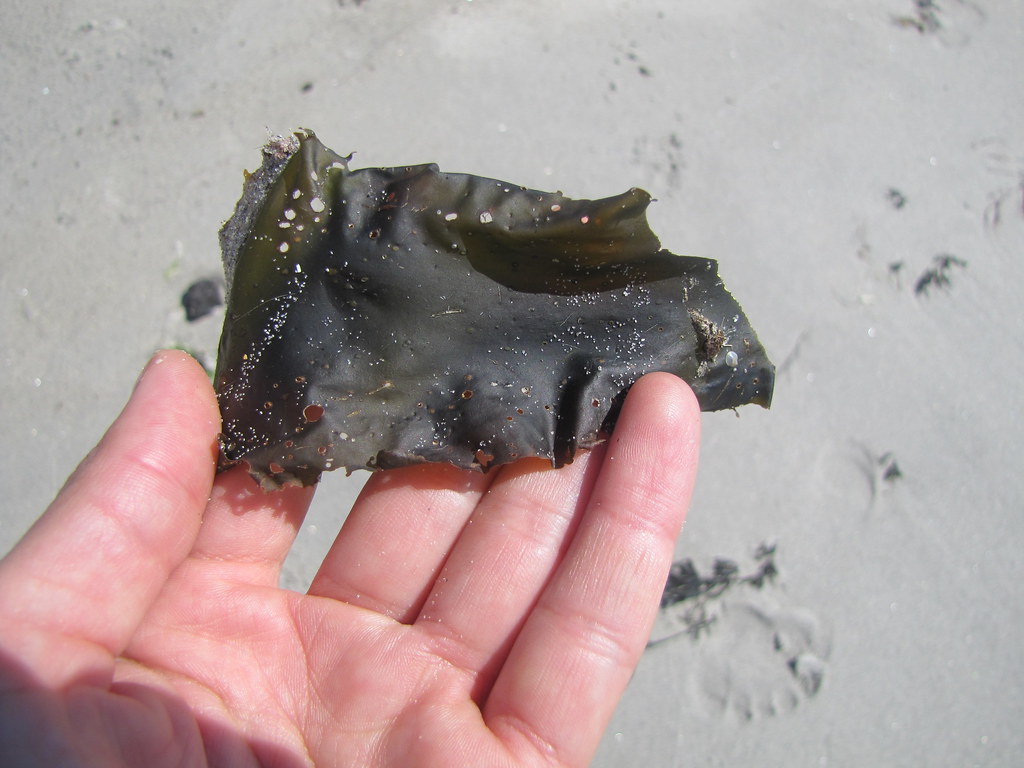 a bit of kelp (or would-be kombu)


Though I’d collected the most gelatinous, non-dried out pieces, I still soaked my seaweed in a big bowl for an hour or so. The sand sunk to the bottom, and I let that (or most of it) drain. I tried to cut the sea lettuce into thin ribbons but it was a bit too slippery to do a great job. With the brown seaweed, I removed any extra-tough bits and separated it into loose strands. Thank goodness my mother always travels with sesame oil and soy sauce, which I doused the rinsed and sliced seaweed with. Then, I let it chill to marinate for a bit.

I took my first bite tentatively. Soft yet unmistakably crunchy, this seaweed salad tasted like the real thing. It could have maybe used a little rice vinegar, and some toasted sesame seeds for garnish. But otherwise, it was seaweed salad alright. And nothing happened to me (or my mom, who dug in appreciatively) the next day. 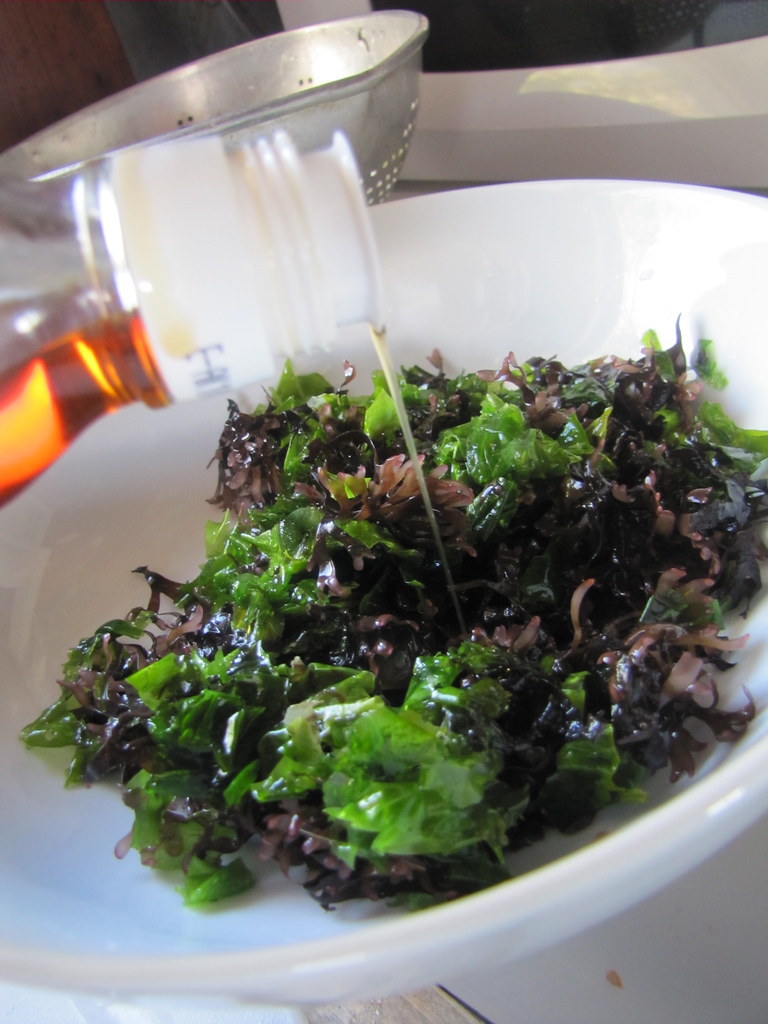 sesame oil is added to the salad

So yes, you can make your own seaweed salad, and it doesn’t have to cost you a dime. Here’s a recipe with a slightly better dressing for it. The main flavor, though, is in the nutrient-rich weeds themselves.

Finely slice or shred seaweed into thin ribbons. Whisk together the remaining ingredients to create a dressing. Toss with the seaweed. Garnish with toasted sesame seeds.

Three brownie points: Seaweed is an essential part of the Japanese diet and many other cuisines, and it’s no coincidence that these are considered among the world’s healthiest. A goldmine for iron, calcium, iodine and even protein, most types of seaweed and other sea vegetables have long been linked to longevity. Brown seaweed in particular has been linked to all types of health benefits, from promoting weight loss to preventing cancer, and is sometimes taken in extract form as a medicinal supplement. So, eat your (sea) vegetables! (But, watch out for sodium, as it has plenty.)

Eight maple leaves: Survival-style eating is no doubt precursor to the “local food” movement. I’m not sure which category this would fall in, but in any case, I feel that I did the beach a small favor by cleaning up some of its washed-up debris. Also, seaweed is an invasive species, so you may be doing the local aqualife a good deed by eating it, too.